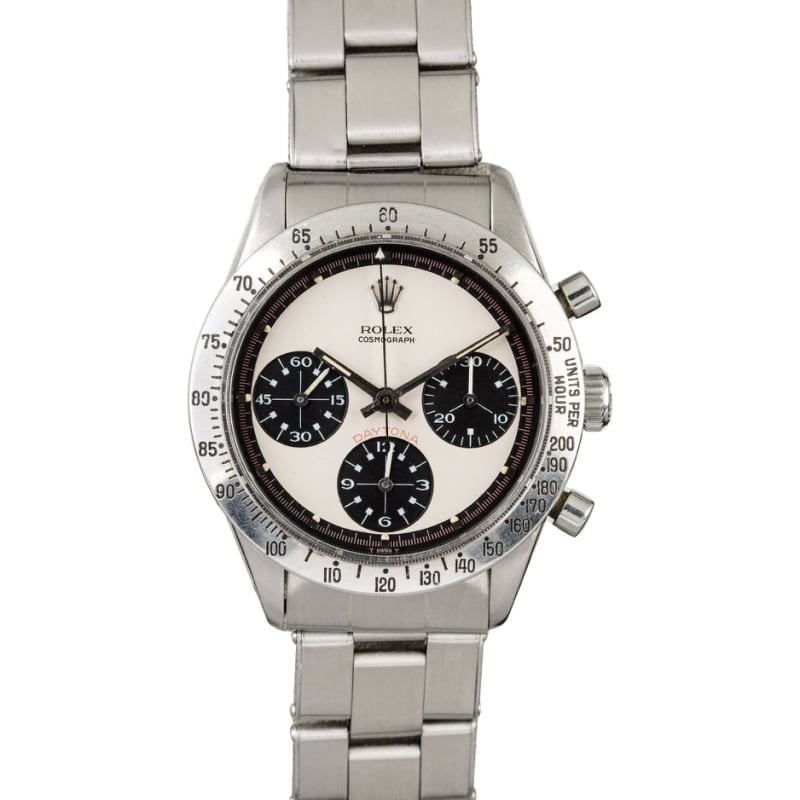 *The Watch is running at COSC spec.
*This item has a Reserve
*Bob’s does NOT charge a buyer’s premium and there are no shipping costs in US. Click Here for international shipping & info.

Perhaps the most desirable vintage watches today are Rolex “Paul Newman” Daytonas, with special exotic dials made by Singer. These watches are named after the famous actor since Paul Newman wore one for many years, after receiving it as a gift from his wife. Newman famously gave the watch to his daughter, Nell’s, then-boyfriend, after he helped him construct a tree house and came to auction in October last year, when it sold for over $17.7 million in New York.

The present lot is the same reference and version that Paul Newman wore: the reference 6239 with the white exotic dial. The reference 6239 notably has a steel bezel and red seconds track. Bob’s Watches recently purchased the watch from the original owner who became aware of its value after the Paul Newman auction. Of the small number of “Paul Newman” Daytonas known to the market, very few include their box and papers, making this an exceptional watch beyond its beautiful condition. The case appears to be lightly polished, while the bezel appears to be unpolished. Most importantly, the dial is in absolutely stunning condition with no visible imperfections.

When putting together this Rolex Box and Papers, Paul Altieri (of Bob’s Watches) and Eric Wind (of Wind Vintage) really wanted an exceptional highlight lot and this is certainly a worthy watch for that honor.

The previous owner was an 87-year old retired physician. In the 1970's, his wife purchased the Paul Newman as a gift for only $250. She bought it for him after he developed an extreme interest in sail boat racing, although he never actually used the watch for its functional purpose. He raced for many years in Lake Huron, and wore the watch daily for decades. However, a couple of years before he sold the watch, he started to reflect on his own health, since he was now in his early 80s. After learning about how his watch had significantly increased in value over the years, he was concerned about the watch being stolen so he decided to sell it to Bob's Watches.

The case appears to have been lightly polished in the past, with light scratches throughout.

The bezel appears to be original and unpolished, with light scratches throughout.

The rivet bracelet appears to be original, and is a US-made bracelet by C+I, with a 7-70 code on the clasp, dating production to July 1970. The bracelet has 57 end links.

The Twinlock crown appears to be original. The top and bottom chronograph pushers also appear to be original. The watch is running and keeping time, and a one-year service warranty is included. The bracelet has 11 links, and will approximately fit an 7 inch wrist.