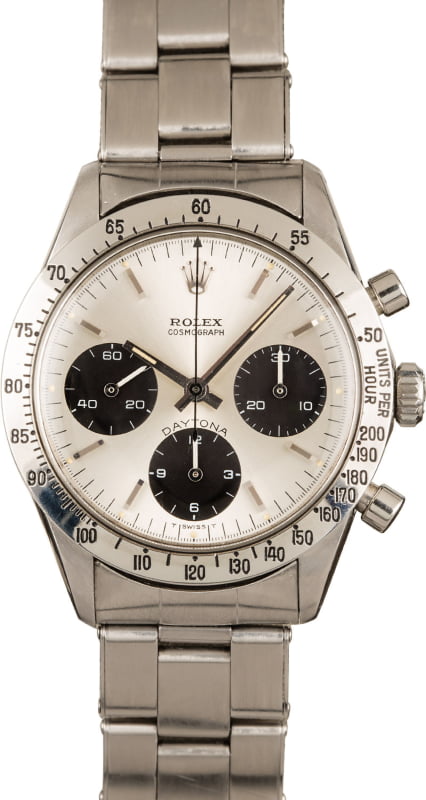 Excellent original stainless steel bezel which has light wear from use.

The first generation of Rolex Daytona watches that existed between the launch of the collection in 1963 and the arrival of a self-winding movement in 1988 comprises a number of different individual references, each with its own set of unique traits and details. One particular model that seldom gets discussed, but is widely agreed upon to be among the least produced Daytona references of all time is the ref. 6262, which only remained in production for about one year in 1970.

Fitted with an acrylic crystal, metal tachymeter bezel, and pump-style chronograph pushers, the reference 6262 was virtually identical to its predecessor, the very first Daytona ref. 6239. However, unlike the previous model, the Rolex Daytona 6262 was fitted with the Valjoux 727 movement which offered a higher operating frequency and promised greater accuracy than the inaugural Daytona reference.

Roughly a year after it was launched, Rolex discontinued the reference 6262 Daytona, replacing it with the reference 6265 that featured screw-down chronograph pushers for greater resistance. Consequently, the ref. 6262 represents the last Rolex Daytona to be fitted with a stainless steel tachymeter bezel and pump-style pushers, which was the configuration of the original Rolex Daytona when the brand first launched the collection in 1963.

This particular Rolex Daytona 6262 has an estimated production date of 1970 and features a silver dial with black registers and tritium lume that has developed a warm creamy patina over the years. At first glance, the reference 6262 may appear to be its more plentiful ref. 6239 predecessor; however it is the internal movements that separate these two models, and the ref. 6262 is one of the most under-the-radar vintage Rolex Daytona references of all time.

This particular Rolex Daytona 6262 was originally purchased by a man named Ray during the 1960s. A welder by trade, Ray also was a published author who wrote magazine articles about cars and motorcycles - two of his primary passions. Given his interest in cars and motorsports, the Rolex Daytona was a logical choice for him and it was an item that he took great pride in owning. After Ray’s passing, the watch fell into the possession of his wife; however when she passed away, the couple’s surviving family was unable to locate the watch and it was then believed to have been previously lost or sold. With no children of their own, the couple’s nephews were left to manage their estate, and after spending several days searching, Ray’s ref. 6262 Rolex Daytona was ultimately found in a bag of spare cash that Ray’s wife had hid in a spare bedroom.