A rare and "fresh-to-market" Rolex Submariner in stainless steel 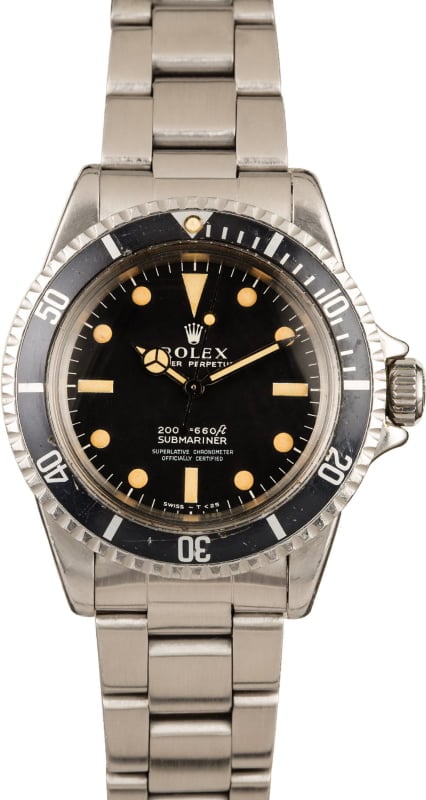 Excellent original stainless steel case which has previously been polished in the past. Serial and reference numbers are crisp and well defined. Inner caseback is stamped 5513 II.67.

Excellent and original fat font bezel which has lightly faded to a navy hue and has slight wear from use.

Excellent and original stainless steel 93150 bracelet with 11 links and 580 end links. Bracelet has minimal wear from use. Clasp has a "B" date code.

The reference 5512 was first released in 1959 and marked the point in history that the Rolex Submariner first started to take on what would ultimately become its contemporary form. With the introduction of the ref. 5512, the case size of the Rolex Submariner grew to 40mm, and for the first time, crown guards made an appearance on Rolex’s legendary dive watch.

Shortly after the release of the ref. 5512 Submariner, Rolex released the ref. 5513 as a less expensive alternative to their iconic underwater watch. While the two Rolex Submariner models appeared almost identical from the outside, the most significant difference was the movement used to power each watch. While the reference 5513 featured a non-chronometer rated movement, the ref. 5512 Submariner featured a movement with COSC-certification and promised superior timekeeping performance.

The reference 5512 Submariner was the superior watch from a performance perspective and was the model of choice for a number of high-profile individuals such as legendary Hollywood actor Steve McQueen. However, the lower price of the ref. 5513 was appealing to buyers at the time, and Submariner 5513 watches significantly outsold their chronometer-certified counterparts. This ultimately resulted in the reference 5512 being discontinued in 1978, while production of the ref. 5513 lasted until the end of the 1980s. While they are similar in appearance, reference 5512 Submariner watches are significantly less common than their ref. 5513 counterparts due to their shorter production period and lower production numbers.

Originally, reference 5512 Submariner watches were fitted with glossy gilt dials; however around 1967, Rolex made the switch to matte dials, which lasted until Rolex discontinued the ref. 5512 Submariner entirely in 1978. This particular example is fitted with a ‘meters-first’ matte dial and dates back to approximately 1967, making it one of the earliest examples of the matte dial Submariner 5512. Additionally, the tritium lume on this ref. 5512 has developed a warm and even patina, making it an exceptional example of this rare and historic Submariner reference.

MOVEMENT: Movement is functioning. Watch comes with a Bob's Watches one year warranty.