This week kicks off our much-anticipated Rolex Daytona Duo auction where we’re putting two very different Daytona 6263 watches up on the auction block. As the most celebrated reference of one of Rolex’s most iconic watches of all time, this is an exciting and unique opportunity to own a piece of history.

Besides being incredible vintage examples of this important reference, what also got us ticking about these watches was the fact that we’re selling them directly from their original owners, both prominent Southern California real estate moguls who bought them back in the 1970’s. One of the watches is even unpolished with its original box and papers, which is almost unheard of for a watch from this era.

Excited yet? To get you ready for the Rolex Daytona Duo Auction which kicks off this Friday, December 6th, we’re going to give you the lowdown on these two remarkable watches. 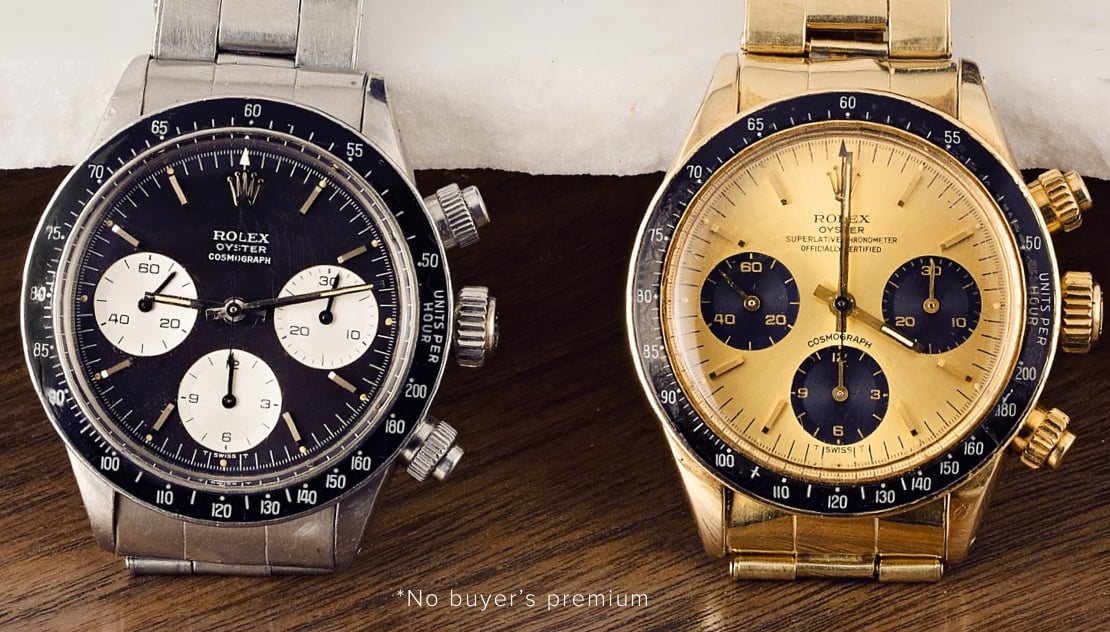 Why these watches matter

There isn’t a vintage Daytona more revered than the reference 6263. Representing the final evolution of the manually-wound generation of Rolex Daytona watches, the Daytona ref. 6263 ushered in a number of new features that would ultimately define the entire collection. For example, there was the addition of screw-down pushers for improved water resistance which was accompanied by the new ‘Oyster’ designation on the dial underneath the word ‘Rolex.’ The 6263 also introduced the manually-wound 17-jewel, Valjoux 727 which greatly improved the reliability of the timepiece.

There’s also the fact that these watches are both earlier, 1970’s models of the ref. 6263, which was produced from 1969 well into the late 1980’s. Once they were purchased by their respective So-Cal owners, the watches remained in the hands of the original owner. As watch collectors know, this is a great advantage for tracing the history and keeping track of the condition, repairs, and servicing. Like we noted above, one of the owners never polished the watch and even held onto the original box and papers – a huge advantage for both value and collectability. 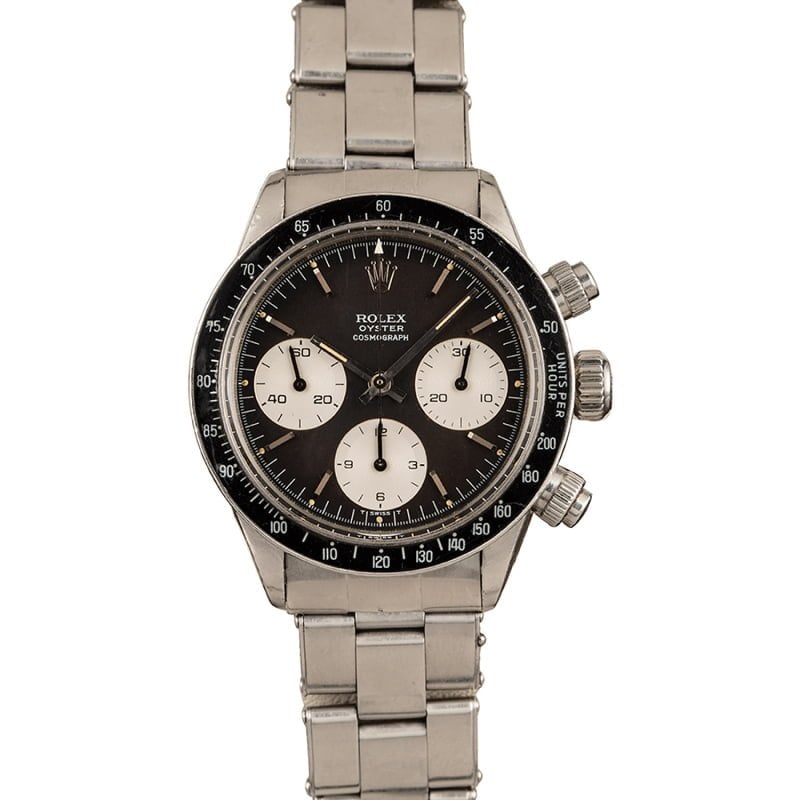 This fresh-to-market 1971 stainless steel Rolex Daytona 6263 is in excellent overall condition and features the beloved ‘reverse panda’ dial which still has all of its luminous dots intact. An early example of the reference, this 6263 doesn’t have the ‘Daytona’ script you’d typically see on the dial; it’s iconic, striking and well intact. There’s also the bezel which has some minor signs of wear and tear from being loved over the years. But, the case itself is original and completely unpolished, making it perfect for all those interested in ‘honest’ watches. The case still has some sharp edges to match its original MK1 pushers.

The Stainless Steel Reverse Panda Daytona ref. 6263 is being sold directly from the family of the original owner, a high-profile real estate investor who had purchased the watch to commemorate one of his largest and most successful deals. This watch still has its original box and Rolex guarantee papers, seldom found with vintage sport watches from this time period. 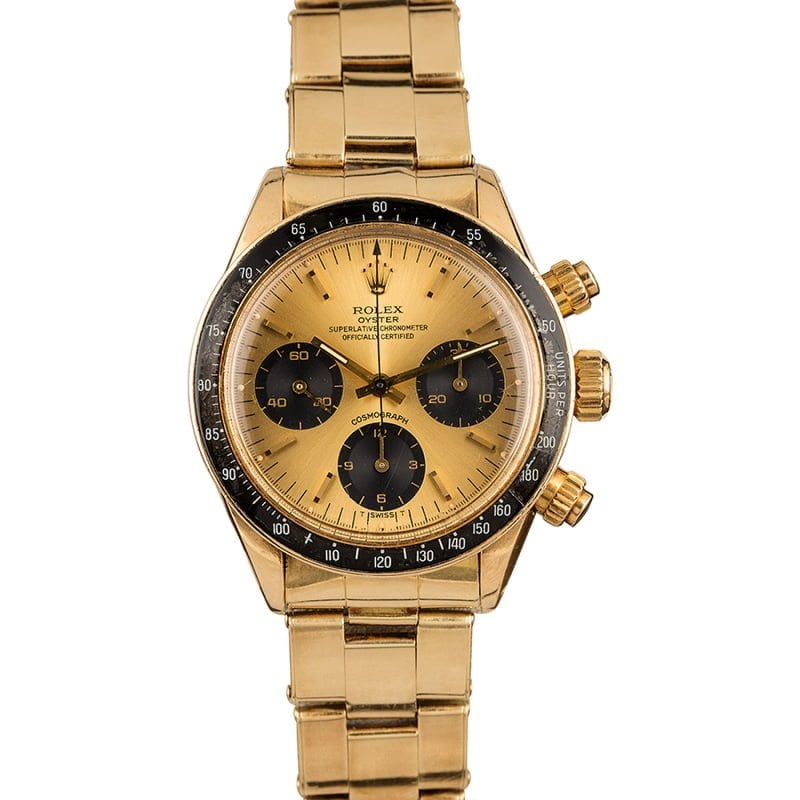 While the ref. 6263 was produced for nearly twenty years between 1969 and the late 1980’s, very few references were ever produced in solid 14k yellow gold. In fact, it’s estimated that only around 100 gold reference 6263 watches were produced each year. Additionally, the gold variants of this reference received chronometer-certified movements beginning in the early 1970s, and many examples can be found with the accompanying ‘Superlative Chronometer Officially Certified’ text on their dials – including this one.

Also being sold directly from the family of its original owner, this incredibly rare 1978 yellow gold Daytona 6263 has been remarkably well-preserved over the years. Although the bezel has a couple slight cracks and displays minor signs of being worn and adored for decades, the case itself still features clean, sharp edges and the original MK2 pushers that are sought-after by collectors. But what really makes this watch shine is that well-preserved champagne dial, which still boasts all of its luminous dots intact. Nothing about this Daytona is understated.

Both the Stainless Steel Reverse Panda Daytona ref. 6263 and the Yellow Gold Daytona ref. 6263 will hit the auction block this Friday, December 6th at 9:00 am Pacific Standard Time. And at Bob’s Watches, we don’t charge a buyers premium, which means that what you bid is what you pay. We’re also offering free shipping within the U.S. and no sales tax if shipped outside of California.

The Rolex Daytona Duo auction will run through the weekend, with bidding closing on Monday, December 9th at 5:00 pm Pacific Standard Time. On Tuesday December 10th, we’ll announce the winners of these incredible timepieces. 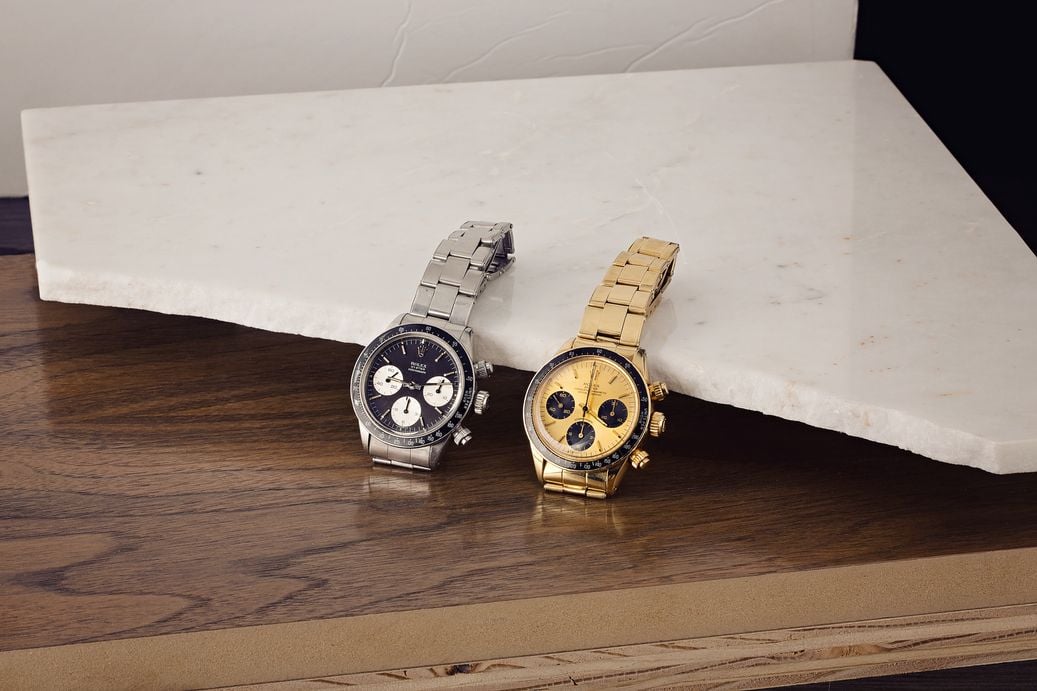 Previous Article How Does a Rolex Watch Auction Work?
Next Article Rolex Daytona vs. Omega Speedmaster