Today marks the start of bidding for The Rolex Daytona Capsule Collection sale, which we are proud to offer in partnership with Sotheby’s. The auction consists of a specially curated selection of 13 superb Rolex Daytona timepieces that are synonymous with the world of motor racing, and that collectively outline the evolution of Rolex chronograph wristwatches.

The timepieces featured in this sale range from the early Pre-Daytona watches of the 1940s, all the way through the highly-coveted ceramic bezel Daytona references that sparked multi-year waitlists when they were unveiled at Baselworld just a few years ago. While every single one of these 13 remarkable lots represents a rare and highly desirable timepiece, here we are highlighting just a few – each one emblematic of a different stage of the Daytona’s long and illustrious history. 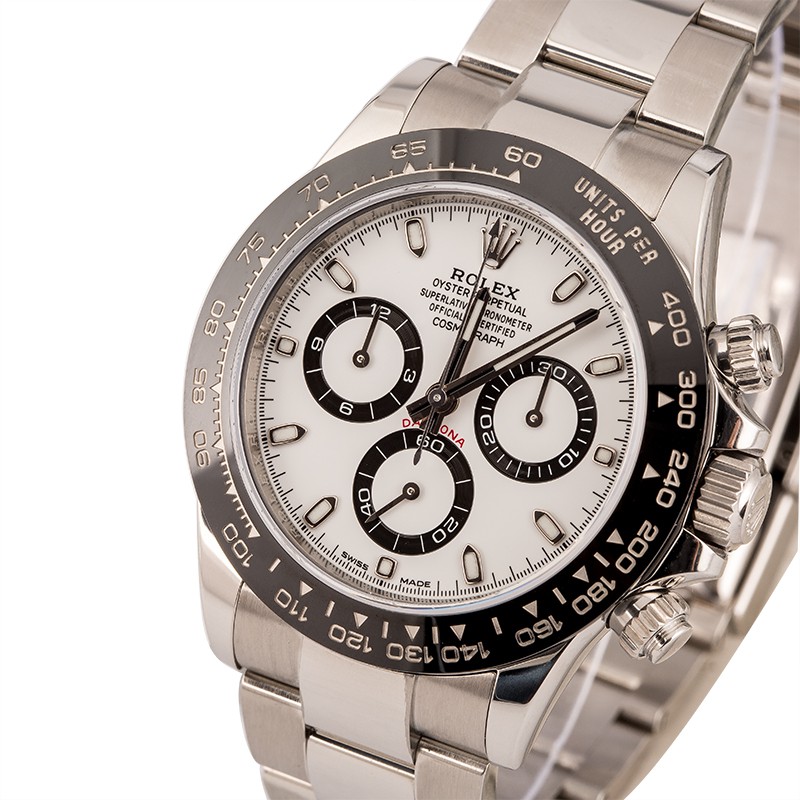 The latest stainless steel Daytona to join the brand’s catalog is the reference 116500. By taking design cues from early vintage Daytona models and fusing them with ultra-modern innovations, the ref. 116500 caused an absolute sensation upon its release at Baselworld 2016. The biggest change to accompany this new generation of stainless steel Daytona watches was the inclusion of a black “Cerachrom” (ceramic) bezel on top of its 40mm Oyster case. The use of a black bezel echoes the design of certain vintage Daytona references that were fitted with black acrylic bezels.

Inside this watch is the famed in-house Caliber 4130 automatic movement that made its debut in 2000. However, Rolex redefined its ‘Superlative Chronometer Officially Certified’ parameters in 2015 to guarantee a daily accuracy rating of -2/+2 seconds a day – double that of the constraints set by the Official Swiss Chronometer Testing Institute (COSC). While the stainless steel Daytona 116500 is currently in production at Rolex, finding one at an authorized retailer can take years due to immense waitlists. 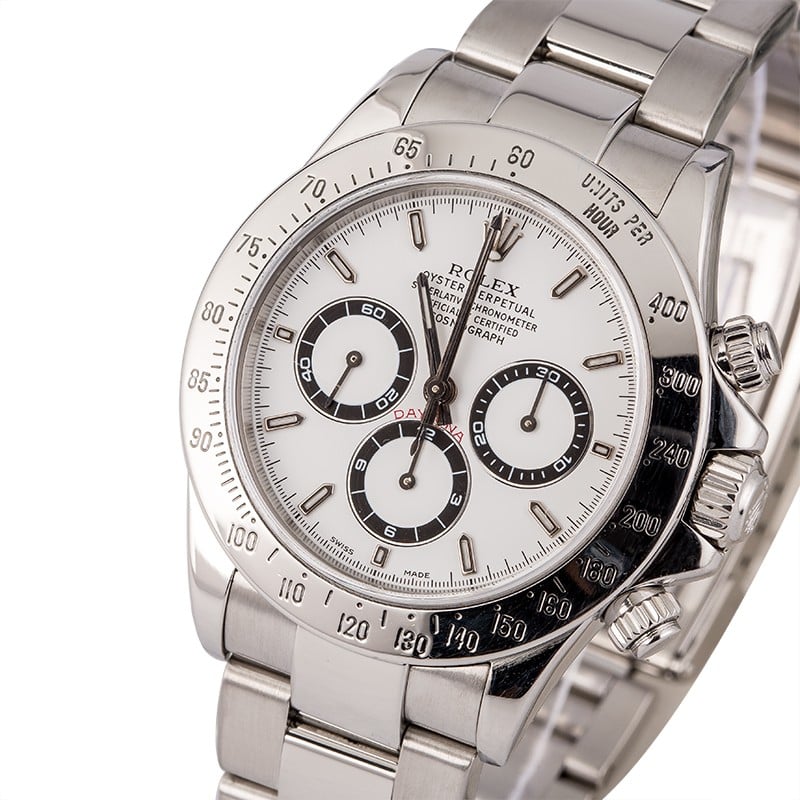 1988 was a milestone year for Rolex chronographs, as it was the year that Rolex introduced the very first self-winding Daytona. Powered by the Caliber 4030, which was based on the Zenith El-Primero movement (heavily modified by Rolex), this family of Daytona watches is commonly referred to as the “Zenith Daytona” among collectors. This generation of Daytona watches remained in production for 12 years until it was discontinued in 2000.

The Daytona ref. 16520 was the stainless steel version of the brand’s first generation of automatic chronographs and right out of the gate, it was a smash hit. Proudly modern in design, the Oyster case of this Daytona 16520 grew to a contemporary 40mm in size, included crown guards for the first time, and was fitted with a sapphire crystal rather than acrylic ones. 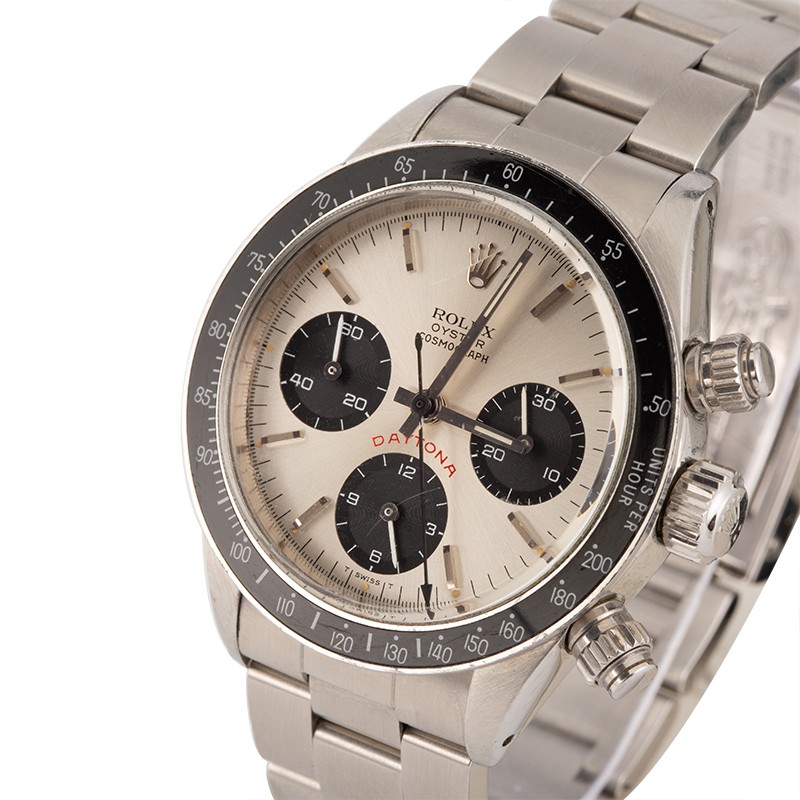 Along with the reference 6265, Rolex also introduced the ref. 6263 Daytona during the 1970s; however it was fitted with a black acrylic bezel instead of a metal one. Just like its full metal counterpart, the ref. 6263 included screw-down chronograph pushers on its case to help prevent moisture intrusion. As a result, the Daytona 6263 saw an increased depth rating, and included the “Oyster” designation on its dial.

This ref. 6263 Daytona runs on the Caliber 727, which is based on the manually-wound Valjoux 72 movement. In fact, the ref. 6263 and the ref. 6265 were the first Rolex references to bring together the Oyster case and the higher beat (21,600bph) Caliber 727 movement. Rolex continued to produce the Daytona 6263 until 1988, when the entire manually-wound Daytona collection was shelved to make way for the new generation Daytona watches with automatic movements. 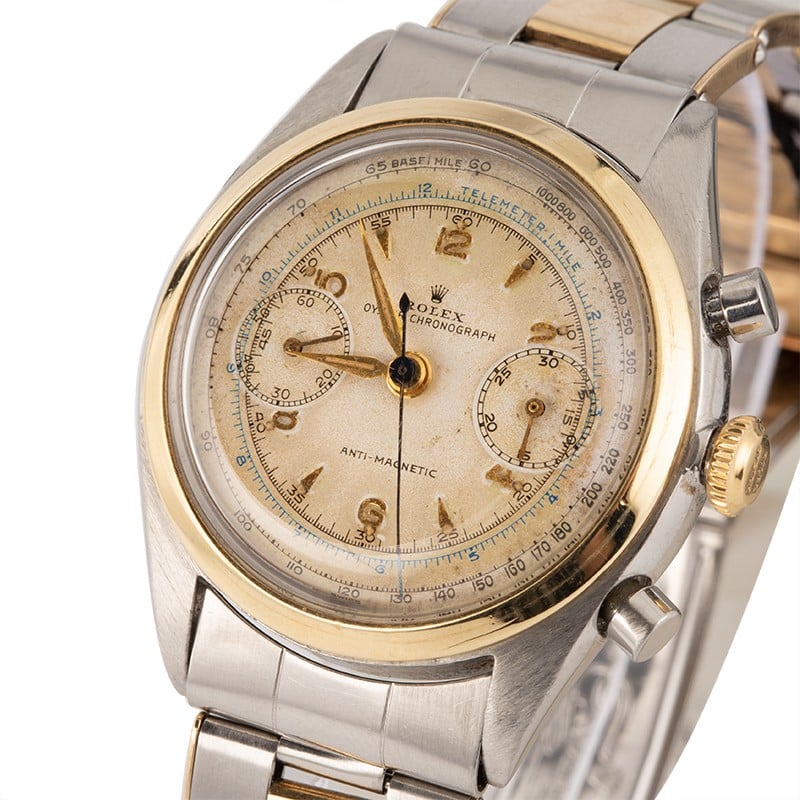 During the Second World War, Rolex launched what is considered to be the first Oyster Chronograph, the ref. 4500, which was later joined by the ref. 6232 and the ref. 3668. These three particular models only had two subsidiary dials, absent of the 12-hour counter that can be found on contemporary Daytona references. Additionally, these early Oyster Chronograph watches had screw-down rather than snap-on casebacks like their predecessors.

Due to the war, the Rolex Oyster Chronograph ref. 4500 experienced poor sales and was only produced for a short period of time before being discontinued. This particular example features a two-tone case and bracelet design, with stainless steel pushers and a gold winding crown.