The Rolex Padellone and Two other Vintage Beauties up for Auction

It’s finally spring, which for the watch world means the start of auction season. The leading auction houses around the world are gearing up for their timepiece sales in New York, Geneva, and Hong Kong. Antiquroum will be hosting their “Important Modern and Vintage Timepieces” auction in New York City on April 20, 2016, with a presentation of over 250 timepieces. Among the lots are a few standout Rolex pieces including a Padellone and two Pre-Daytona chronos, all from the 1950s. Here’s a closer look at these vintage classics. 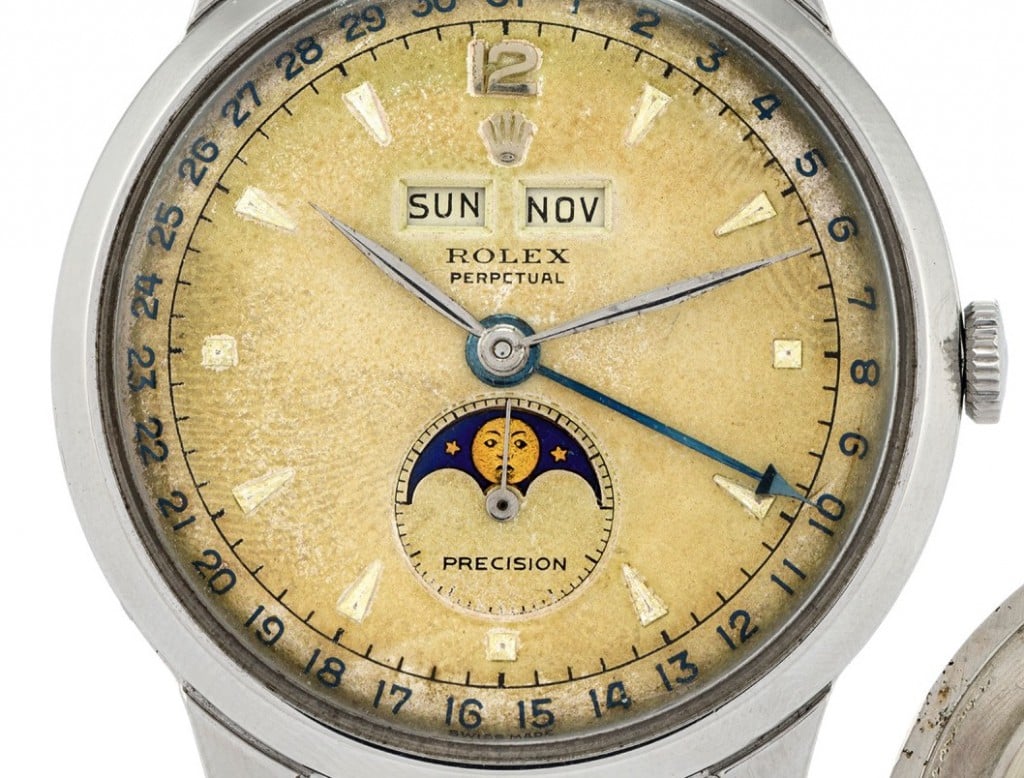 Rolex 8171 “Padellone” will be at Anitquorum up for auction. We encourage our readers to take part. (Image courtesy of Antiquorum)

The Rolex ref. 8171 is one of only two references the brand ever made that combined both a triple calendar and a moon phase indicator. Manufactured in 1950, this 38mm stainless steel, self-winding, antimagnetic watch was nicknamed the “Padellone”, which is Italian for frying pan, due to what was considered a hefty size for the era. This stunning vintage luxury watch was quite the anomaly for its unique features. The day of the week and month windows sit right below the Rolex crown at 12 o’clock while the days of the month are indicated via blue Arabic numerals on the outer track of the dial. This particular ref. 8171 is expected to fetch between $50,000 – $70,000 during the sale. 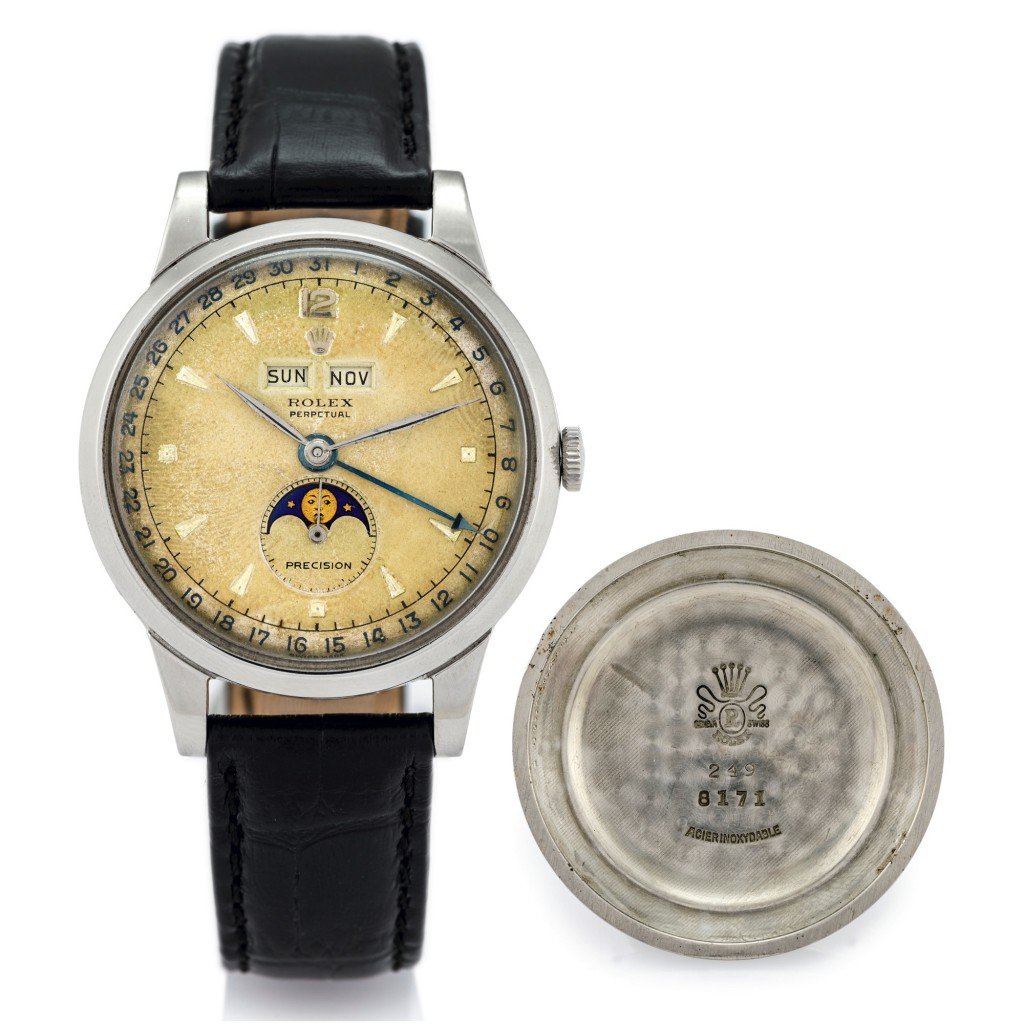 Rolex’s love affair with the world of automobile racing began in the mid-1930s and it’s a relationship that not only has endured over the decades but flourished with the brand naming one of its flagship collections after the capital of racing. Belonging to a family of watches collectively known as “Pre-Daytona” chronographs, the Oyster Chronograph ref. 6034 is an incredibly cool vintage sports watch. It features a very sporty dial with three sub-dials, a red telemeter scale, a blue tachometer scale, and steel hour markers and hands. Within the 36mm steel case is the Caliber 72 manual-wound mechanical movement with 17 jewels. Antiquorum is expecting the hammer to come down anywhere between $18,000 to $24,000 for this particular Oyster Chronograph 6034. 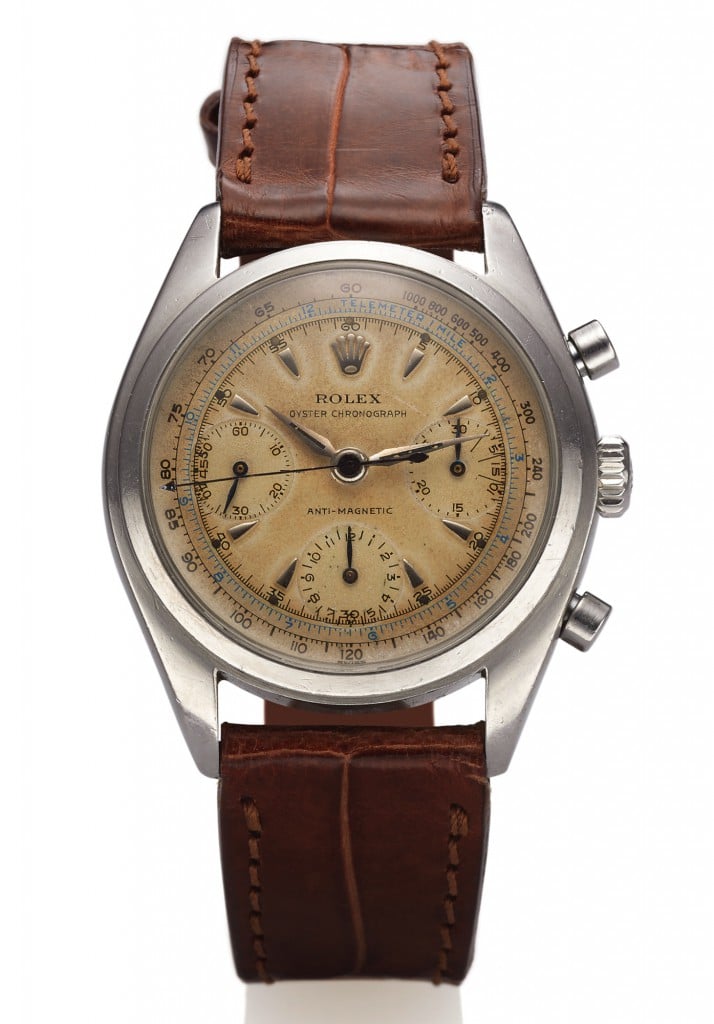 Another precursor to the now famed Rolex Daytona chronograph, the Rolex Oyster Chronograph 6234 replaced the ref. 6034 and was in production from 1955 until the very early 1960s. Its dial also featured the trio of subsidiary dials at 3, 6, and 9 o’clock as well as the telemeter and tachometer scales in red and blue respectively. Also worth nothing is the “ANTI-MAGNETIC” label featured prominently on the dial. The 36mm steel case, with its pusher buttons to start, stop, and reset the chronograph function, houses the Caliber 72 manual-wound mechanical movement with 17 jewels. This particular Oyster Chronograph 6234 is being sold with its original box and papers and has a pre-sale estimate of $15,000 to $20,000. 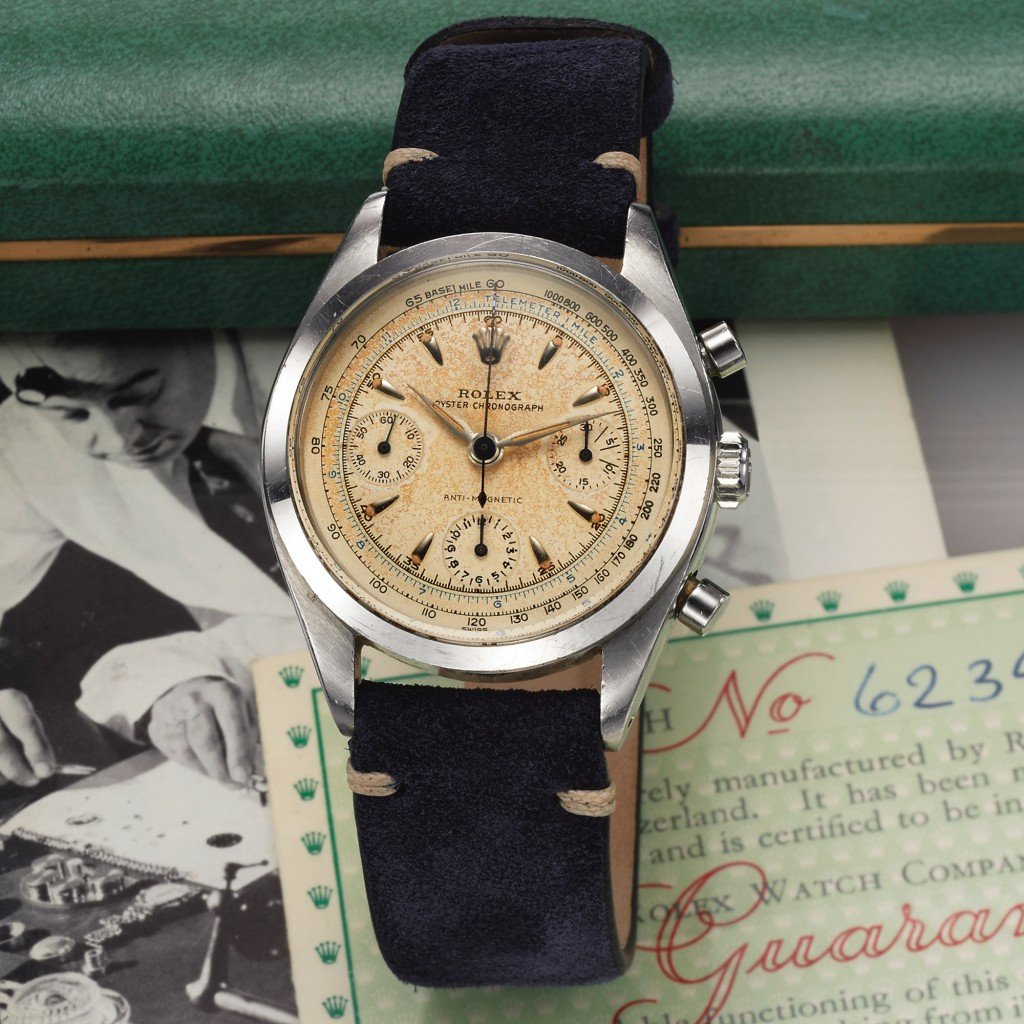