This Sunday was a big day for Omega watches ambassador and professional golfer, Collin Morikawa, who won his first Major title at the PGA Championship. At just 23 years old, Morikawa is the youngest player ever to break 65 in the final round of a major victory, making it a major event when he hoisted the famous Wanamaker Trophy at TPC Harding Park in San Francisco, California. 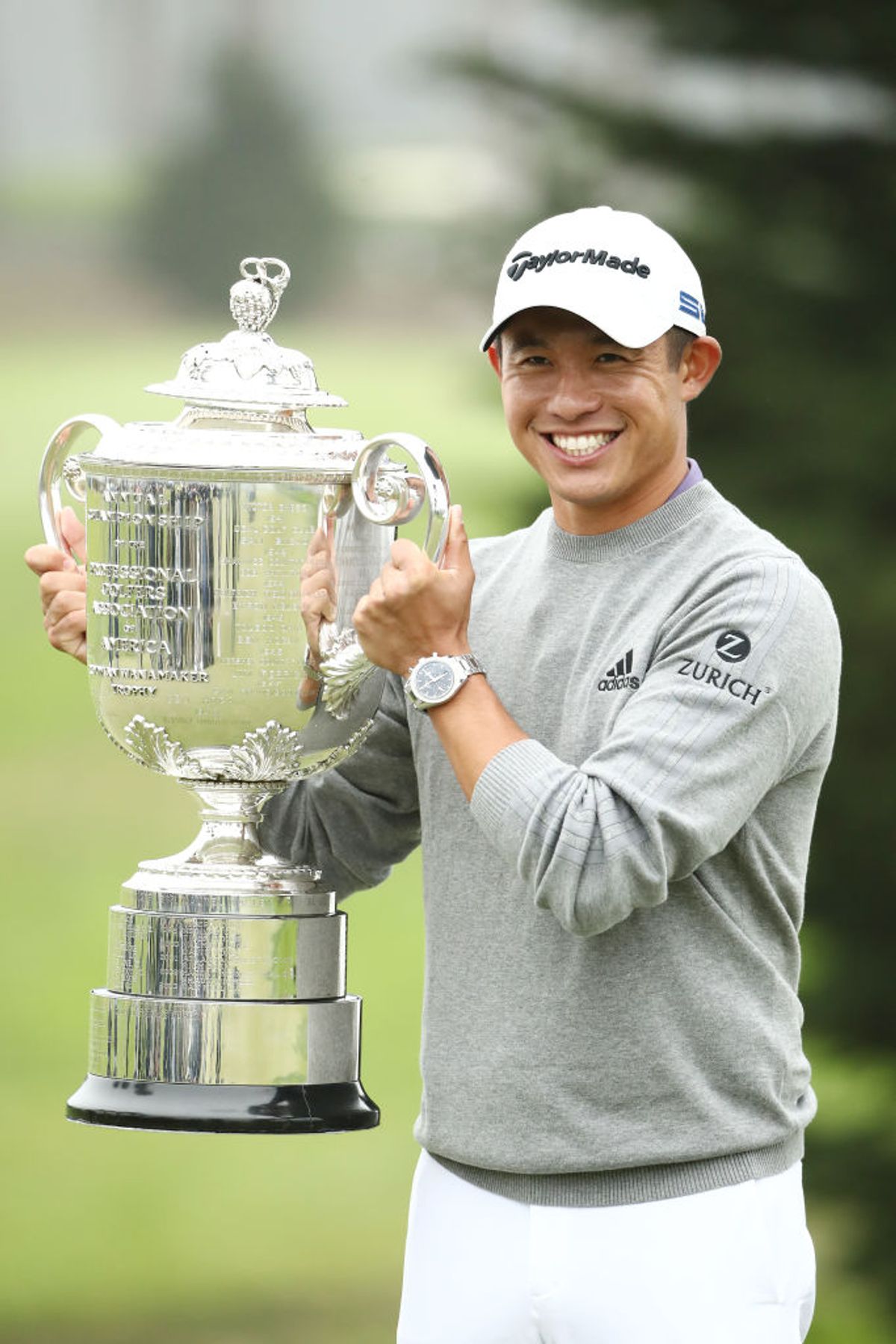 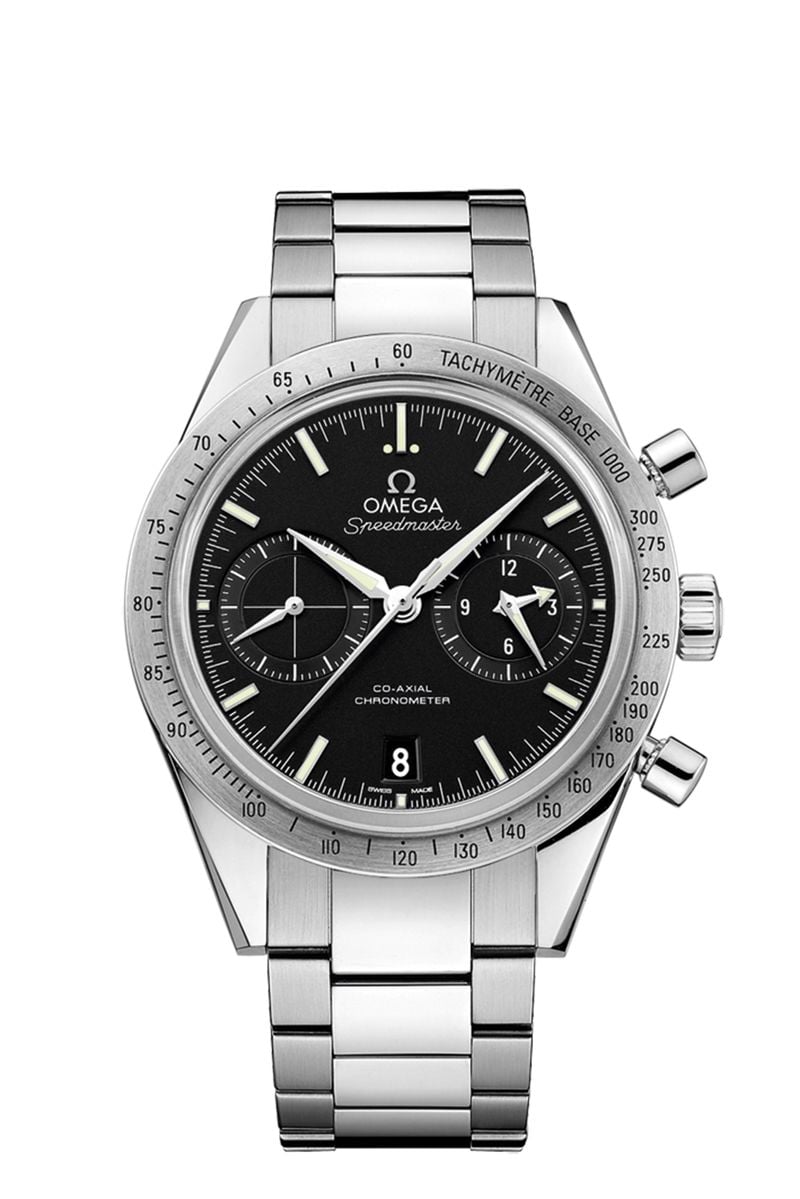 Click here to learn the difference between the classic Omega Speedmaster and the Speedmaster ‘57.

As a pro golfer and an Omega brand ambassador, Collin Morikawa likely has access to virtually any Omega watch he wants, so it comes as no surprise that he was spotted wearing one during the PGA Championship awards ceremony. Specifically, Morikawa was wearing an Omega Speedmaster ‘57 Co-Axial Chronograph ref. 331.10.42.51.01.001 when he held up the Wanamaker Trophy on Sunday.

Collin Morikawa is a more recent addition to Omega’s lineup of professional golf stars; however he is already on his way to becoming a household name. He joins other legendary names on Omega’s roster of golfers such as Sergio Garcia, Tommy Fleetwood, and Rory McIlroy, who won the PGA Championship in 2014. 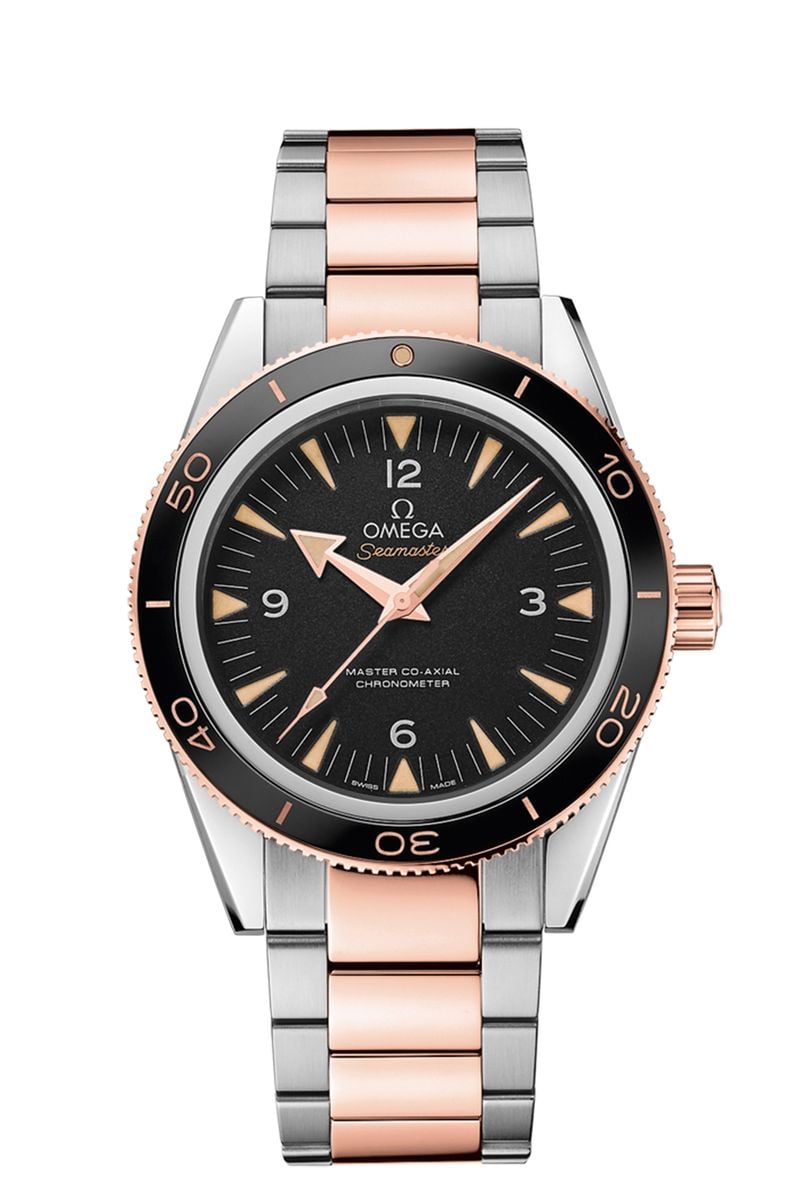 Click here to learn the difference between the Omega Seamaster 300 and the Seamaster Diver 300M.

Although Collin Morikawa was wearing a stainless steel Omega Speedmaster ‘57 during the PGA Championship awards ceremony, he also took home another Omega watch as part of his winnings from the event. A stainless steel and 18k Sedna red gold Omega Seamaster 300 ref. 233.20.41.21.01.001 was presented to Morikawa at the ceremony, and since this watch commemorates his first Major victory, it will likely be one that will remain a part of his collection for a long time to come.

Just like the Speedmaster ‘57 that was spotted on Collin Morikawa’s wrist when he held up the Wanamaker Trophy, the Omega Seamaster 300 draws its design inspiration from the very first Seamaster model launched in 1957. Additionally, just like the Speedmaster ‘57, the Omega Seamaster 300 is a thoroughly modern timepiece and features contemporary materials and one of the brand’s high-tech Co-Axial movements. 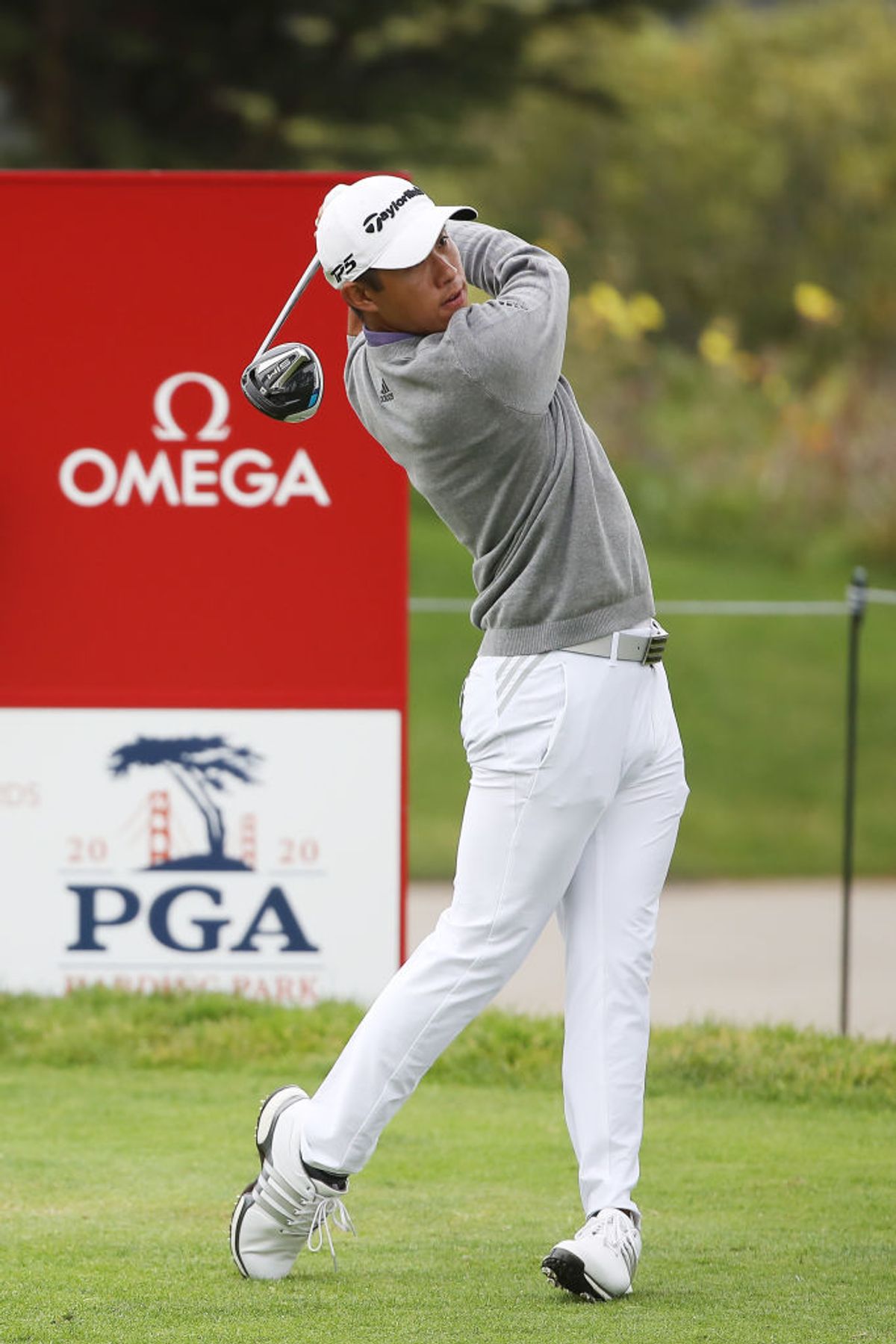 While Omega’s relationship with the Olympic Games is easily the brand’s longest-running and most well-known partnership with the world of sports, the historic Swiss watch manufacturer also has a strong relationship with golf and supports many of the sport’s biggest competitions, organizations, and players.

In addition to sponsoring some of the biggest names and tournaments on the professional golf circuit, Omega also offers a range of Aqua Terra watches that are inspired by the sport of golf. Featuring 41mm stainless steel cases and dials with the collection’s signature horizontal teak pattern, Omega Seamaster Aqua Terra “Golf” watches include bright pops of either green or orange and pay tribute to the sport, often paired with matching NATO straps in a complimentary color. Powered by Omega’s Master Chronometer Cal. 8900 movement, Omega Aqua Terra “Golf” watches are entirely antimagnetic and also boast 150 meters of water resistance.

Furthermore, alongside the standard Aqua Terra “Golf” models, the brand also produces a highly-advanced version known as the Omega Aqua Terra Ultra Light that is designed specifically for use while playing active sports. Featuring a case constructed from Gamma Titanium, a specially-designed movement that is both incredibly light and durable, and a telescoping winding crown that can be pushed inside the case to prevent it from accidentally getting caught or receiving impacts.

At just 23 years, six months and three days, Collin Morikawa is one of the youngest professional golfers to win a Major title in the history of the sport. Morikawa joins legendary household names such as Jack Nicklaus, Tiger Woods, and Rory McIlroy (who were all 23 when they won their first Major titles), making him one of the four youngest players to win in the past 74 years. Given how much Collin Morikawa has already accomplished at such a young age, it is highly likely that we will be seeing more of him on the winner’s podium and he will undoubtedly be wearing an Omega watch when he holds up his next trophy.

* All images courtesy of OMEGA. 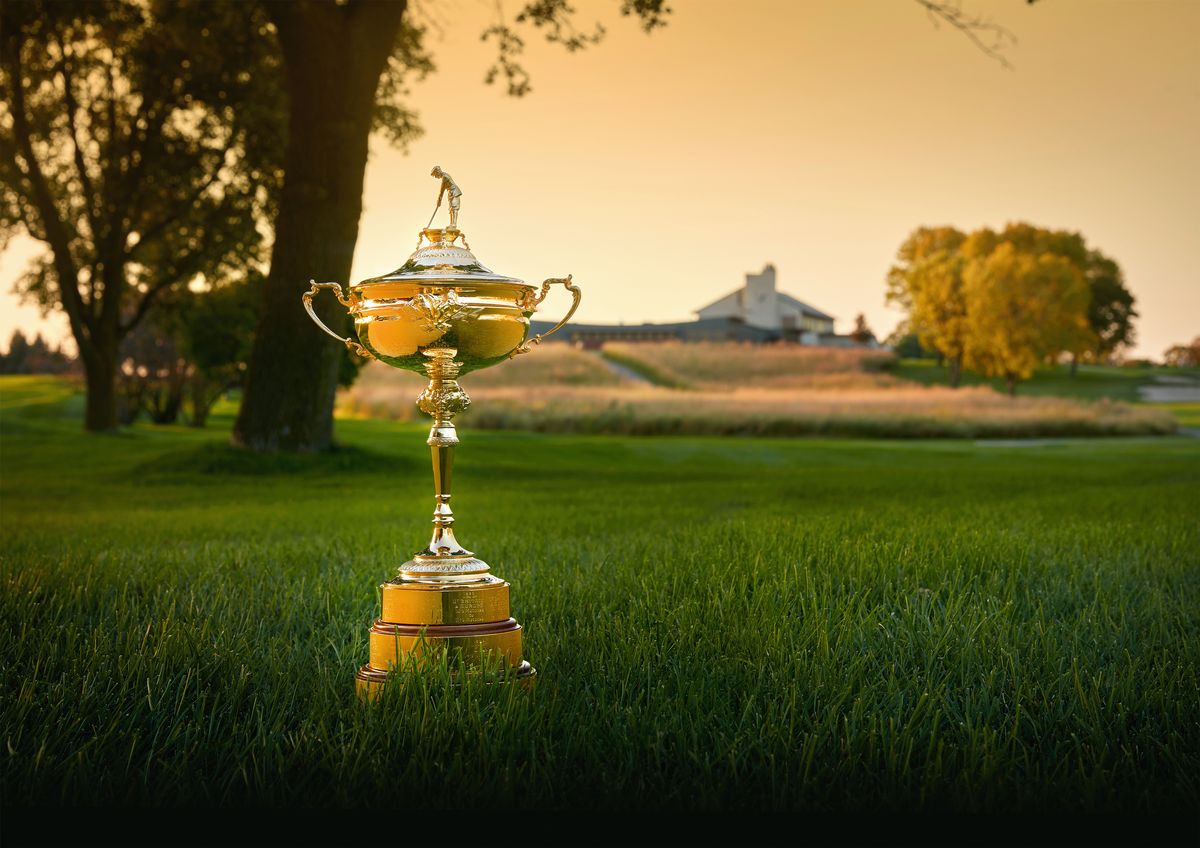