Exactly 50 years ago today, Omega received the Silver Snoopy Award from NASA for the Speedmaster’s crucial and life-saving role in the Apollo 13 mission. To celebrate the occasion, the historic Swiss watch manufacturer has announced the Omega Speedmaster “Silver Snoopy Award” 50th Anniversary, which brings everyone’s favorite cartoon beagle to a new – and non-limited edition of the iconic Moonwatch.

This is not the first Silver Snoopy edition of the Omega Speedmaster, but many collectors are calling it the best and most interesting one to date. Alongside a striking blue and silver color profile and the inclusion of the beloved cartoon dog, the new Snoopy Speedy also features a unique animated display on its caseback that is linked to the watch’s internal movement (more on this below). 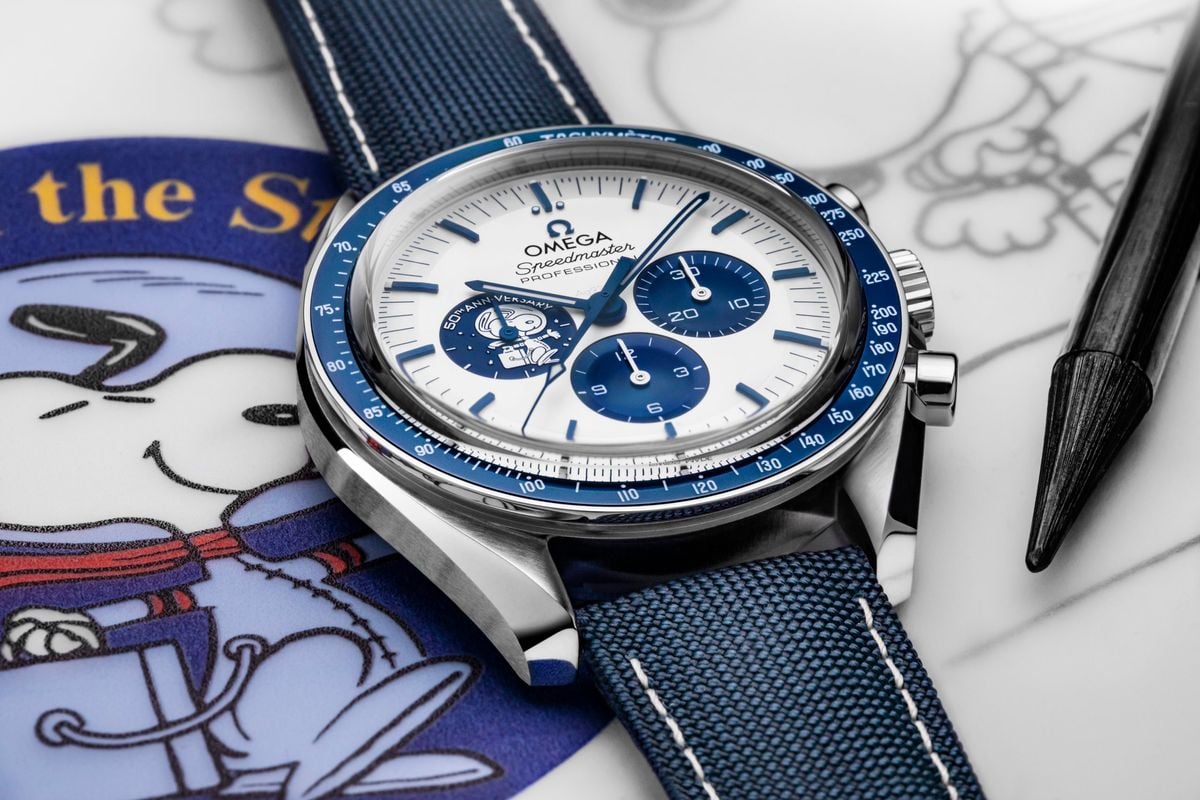 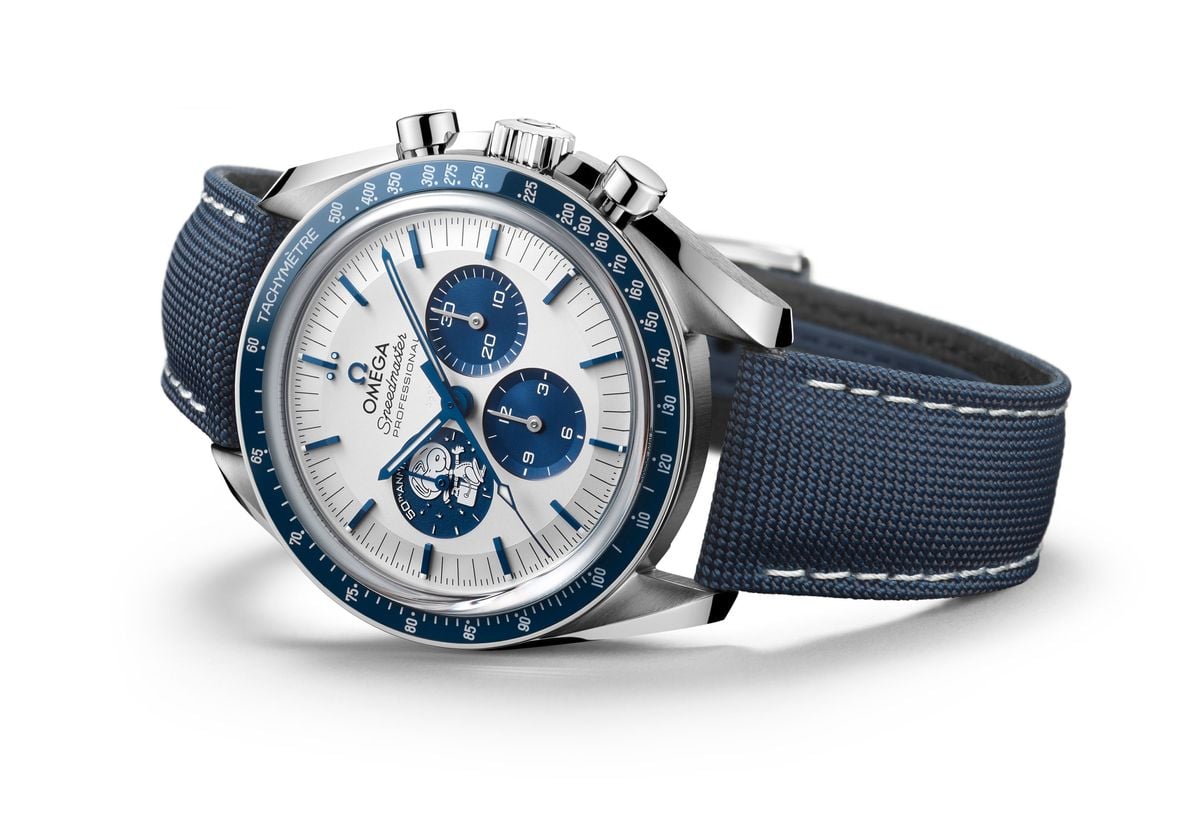 Why is Snoopy on the Omega Speedmaster?

It may seem somewhat random for Snoopy – a cartoon dog from the comic series created by Charles M. Schulz to be on the dial of one of the world’s most famous luxury chronograph watches; however the association between the Omega Speedmaster and Snoopy is one that actually has NASA to thank for its origins.

On October 5th, 1970, Omega was presented with NASA’s Silver Snoopy Award in recognition of the brand’s unique contributions to space exploration, as well as the Speedmaster’s vital role during the rescue of Apollo 13. During the mission, an explosion inside one of the ship’s oxygen tanks damaged the ship’s systems, forcing the astronauts to use their NASA-issued Omega Speedmaster watches to time a crucial 14-second rocket burn to bring their projected entry flight path angle back within safe limits.

What does Snoopy Have to do with NASA?

“NASA has shared a proud association with Charles M. Schulz and his American icon Snoopy since Apollo missions began in the 1960s. Schulz created comic strips depicting Snoopy on the Moon, capturing public excitement about America’s achievements in space. In May 1969, Apollo 10 astronauts traveled to the Moon for a final checkout before lunar landings on later missions. Because the mission required the lunar module to skim the Moon’s surface to within 50,000 feet and “snoop around” scouting the Apollo 11 landing site, the crew named the lunar module Snoopy. The command module was named Charlie Brown, Snoopy’s loyal owner.” 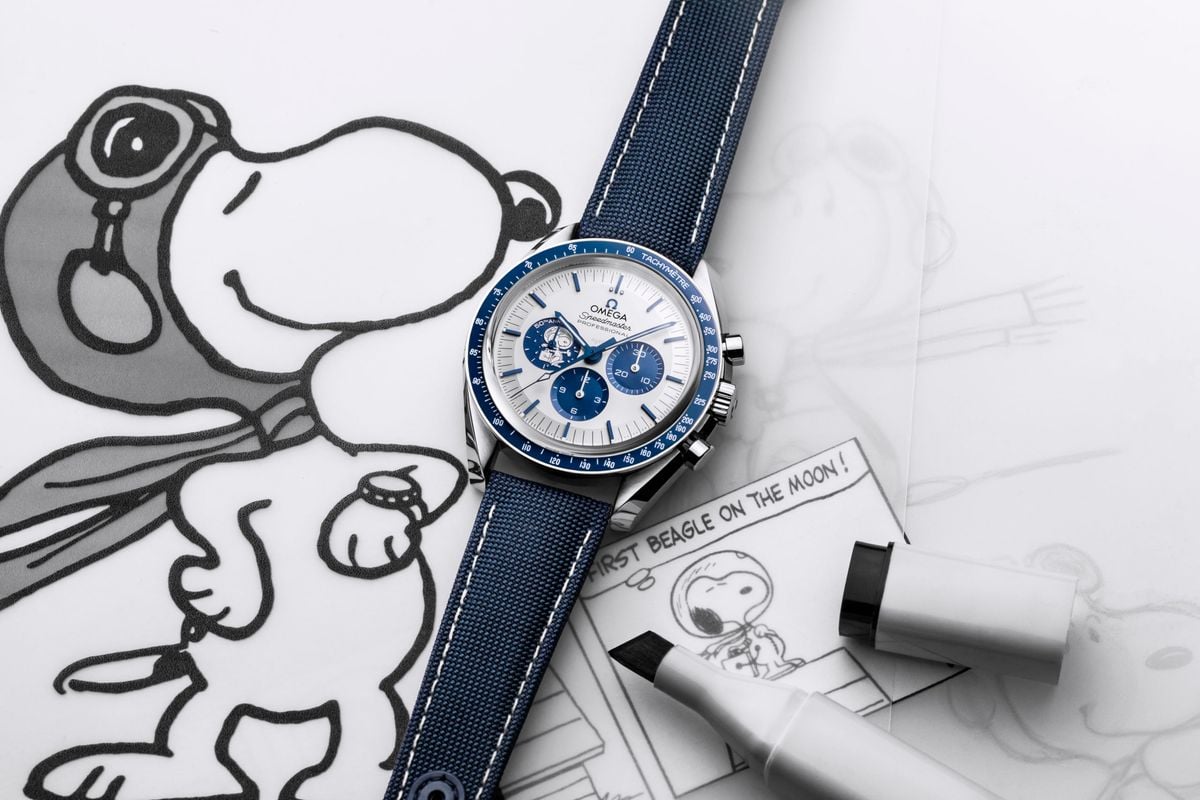 The new Omega Speedmaster “Silver Snoopy Award” 50th Anniversary watch is a significant departure from the classic NASA-certified Moonwatch. Although it features a 42mm stainless steel case with twisted lugs and integrated crown-guards – just like the standard Omega Moonwatch, quite literally everything else about the new 50th Anniversary Snoopy Speedy is completely different, and makes for an incredibly special and intriguing timepiece.

The overall color profile of the watch is blue and silver, with a dial crafted from sterling silver (engraved with Ag925) with blue registers – basically a blue panda dial. Hour markers and hands appear in the classic Moonwatch style; however, the indices are applied rather than printed on the dial surface. Additionally, both the hour markers and hands are given a blue PVD finish to match the other blue accents on the watch.

A cartoon of Snoopy wearing a spacesuit appears as an embossed sterling silver medallion on the blue sub-dial at 9 o’clock. While Snoopy has appeared in a number of different styles on Omega’s previous Snoopy-edition Speedmaster watches, the Snoopy cartoon on the new Omega Speedmaster “Silver Snoopy Award” 50th Anniversary is rendered in the exact same style as the silver pin that NASA astronauts give to recipients of the prestigious award.

Matching the blue sub-dials is a blue ceramic bezel (ZrO2) that frames the silver dial and AR-coated sapphire crystal. The bezel’s obligatory tachymeter scale is rendered in white enamel and features the iconic “Dot over Ninety” (DON) style that is characteristic of vintage Omega Speedmaster watches.

Completing the watch and matching the other blue accents is a blue nylon fabric strap. Another nice yet subtle detail here is that the inner lining of the strap is embossed with the flight trajectory of the Apollo 13 mission, further connecting this watch to the life-saving role the Speedmaster played in earning Omega the Silver Snoopy Award a half-century ago. 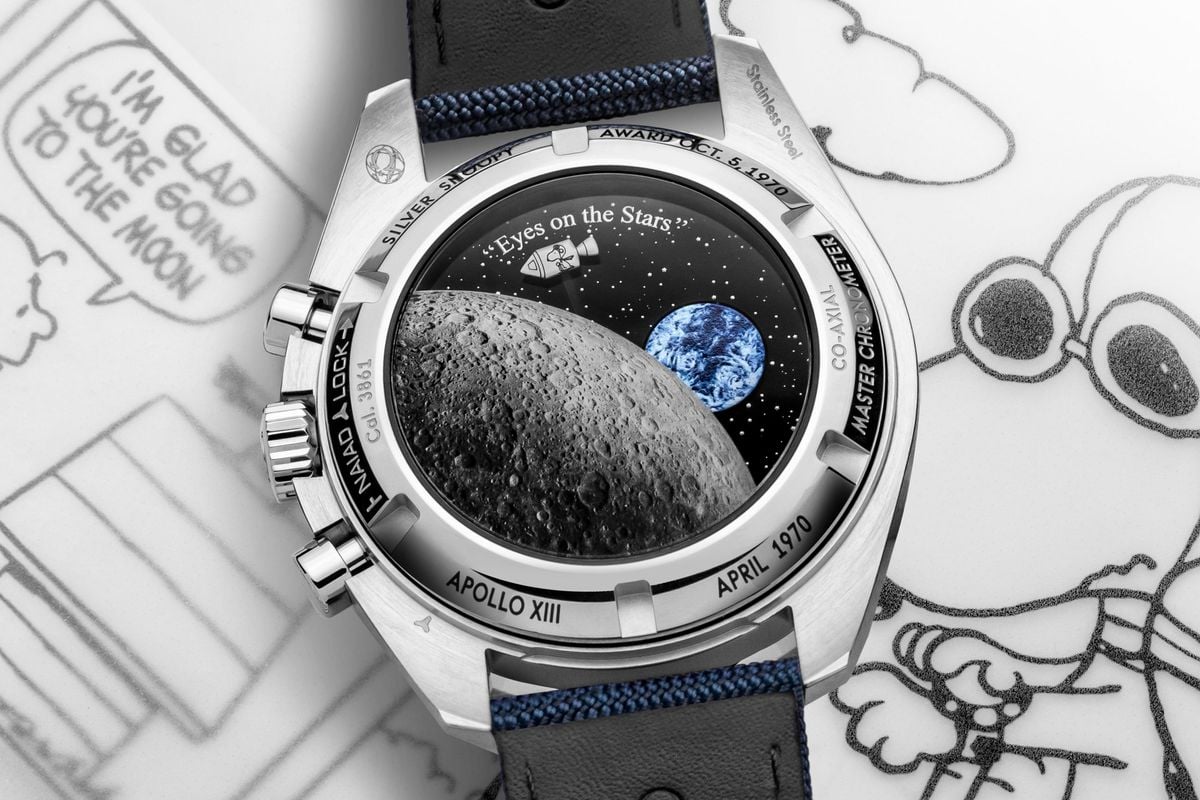 Powering the Omega Speedmaster “Silver Snoopy Award” 50th Anniversary is the brand’s Co-Axial Master Chronometer Caliber 3861 movement. While some collectors are sad that the new watch will not be featuring the revived Caliber 321 movement, the move for Omega not to include it in this watch simply makes sense.

Given that Omega’s production of the Cal. 321 is incredibly limited by nature, it would be a stretch for the brand to start including it in an additional model  – especially one that is not a limited edition – on top of the new “Ed White” Speedmaster and the Platinum Moonwatch. Furthermore, the movement in the Omega Speedmaster “Silver Snoopy Award” 50th Anniversary needs to also power the watch’s animated caseback (hang in there, we will be getting to all that shortly) and modifying the iconic Caliber 321 would only detract from its inherent appeal among purist collectors.

The Caliber 3861 movement is a manual-winding chronograph movement, fitted with Omega’s Co-Axial escapement with a free-sprung balance and a silicon balance spring. Offering a 50-hour power reserve, the Cal. 3861 is a METAS- certified Master Chronometer, which means that it promises a timekeeping accuracy of less than 0/+5 seconds per day, along with being resistant to magnetic fields up to 15,000 gauss. 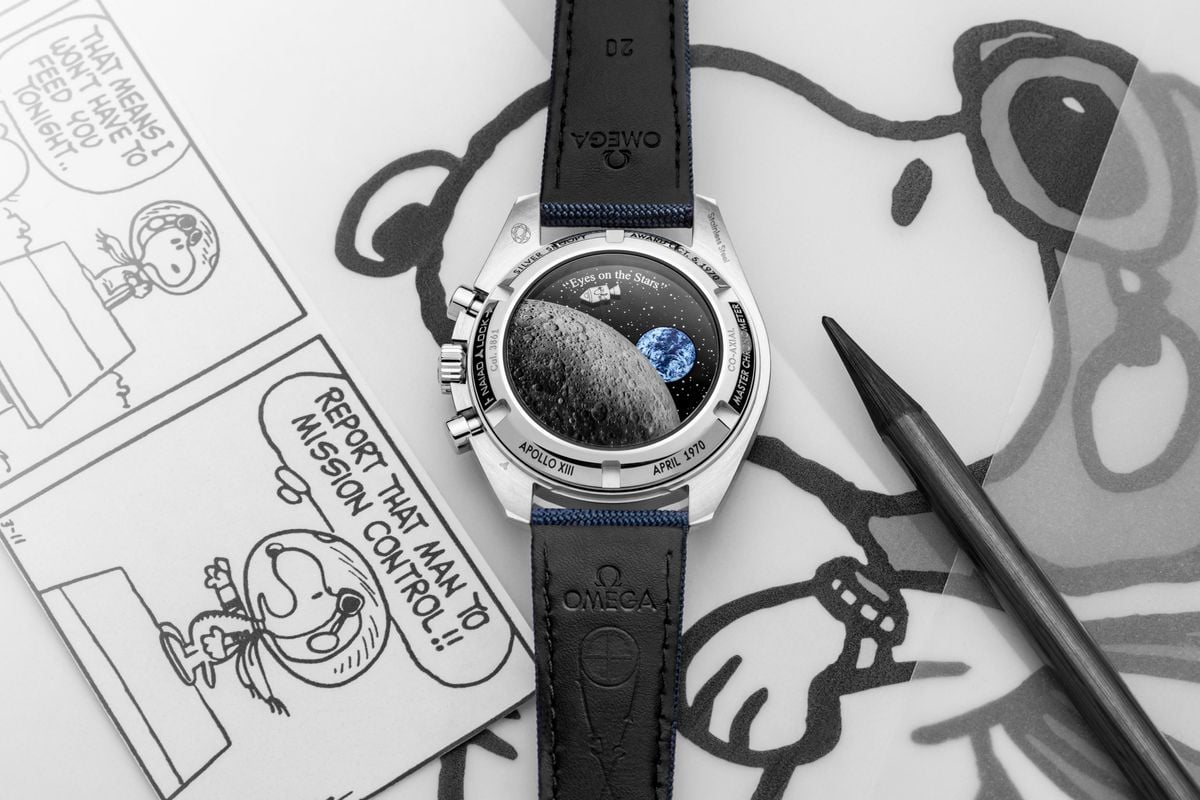 The bright blue and silver color profile is stunning, and it certainly represents an aesthetic departure from the classic all-black Moonwatch. However, despite the numerous details and features that make the Omega Speedmaster “Silver Snoopy Award” 50th Anniversary unique, it is the animated caseback of the watch that is its true party piece.

Rather than being fitted with a traditional sapphire exhibition caseback, or one with a special Snoopy-themed engraving, the case-back on the Omega Speedmaster “Silver Snoopy Award” 50th Anniversary watch features a truly unique, animated caseback. Calling it an animated caseback may be slightly confusing as it is not really something that is part of our general watch-related vernacular; however, it is really the only term that properly comes close to describing the caseback on the 50th Anniversary Silver Snoopy Speedmaster, because it actually features a number of moving components.

Like a standard display caseback, the one found on the 50th Anniversary Silver Snoopy Speedy consists of a metal outer ring and a circular sapphire center section. However, the best way to describe the reverse side of the new watch is that it has an entire secondary dial – just not one used for time-telling purposes.

Part of the underside of the crystal is decorated with a pattern of the lunar surface using a unique micro-structured metallization process. Below that, completely obscuring the view of the movement is surface decorated like a star-filled sky. The difference in depth between the moon etching on the underside of the crystal, and the night sky below it gives the appearance that the moon is floating, but it also provides space for the animated components to move.

Against the star-filled sky is a disc that depicts the Earth (as seen from the lunar surface), and this disc is connected to the backside of the running seconds gear so that it rotates as the watch runs. Additionally, when you start the chronograph, a hidden hand activates, and at the tip of the hand is a cartoon of Snoopy riding a rocket. As the chronograph runs, Snoopy appears from behind the moon etching on the crystal, and after 14 seconds, he floats over the Earth disc before disappearing again behind the lunar surface of the crystal (see video below).

As this type of animated caseback would be impossible with the standard screw-on variety, the caseback on the Omega Speedmaster “Silver Snoopy Award” 50th Anniversary watch features the brand’s NAIAD LOCK system, which also guarantees that the caseback engravings will always be in their correct and upright position.

Like most modern Omega models, the packaging of the Omega Speedmaster “Silver Snoopy Award” 50th Anniversary watch is rather impressive. Included with the watch is a blue and white display box packed with Silver Snoopy and Speedmaster goodies, such as a soft case, microfiber cleaning cloth, loupe, and all necessary certification cards and brochures (including Omega’s 5-year factory warranty).

The new 50th Anniversary Silver Snoopy Speedmaster is accompanied by an official retail price of $9,600 and it will be available in stores and Omega boutiques starting at the end of October 2020.

*All Images courtesy of OMEGA. 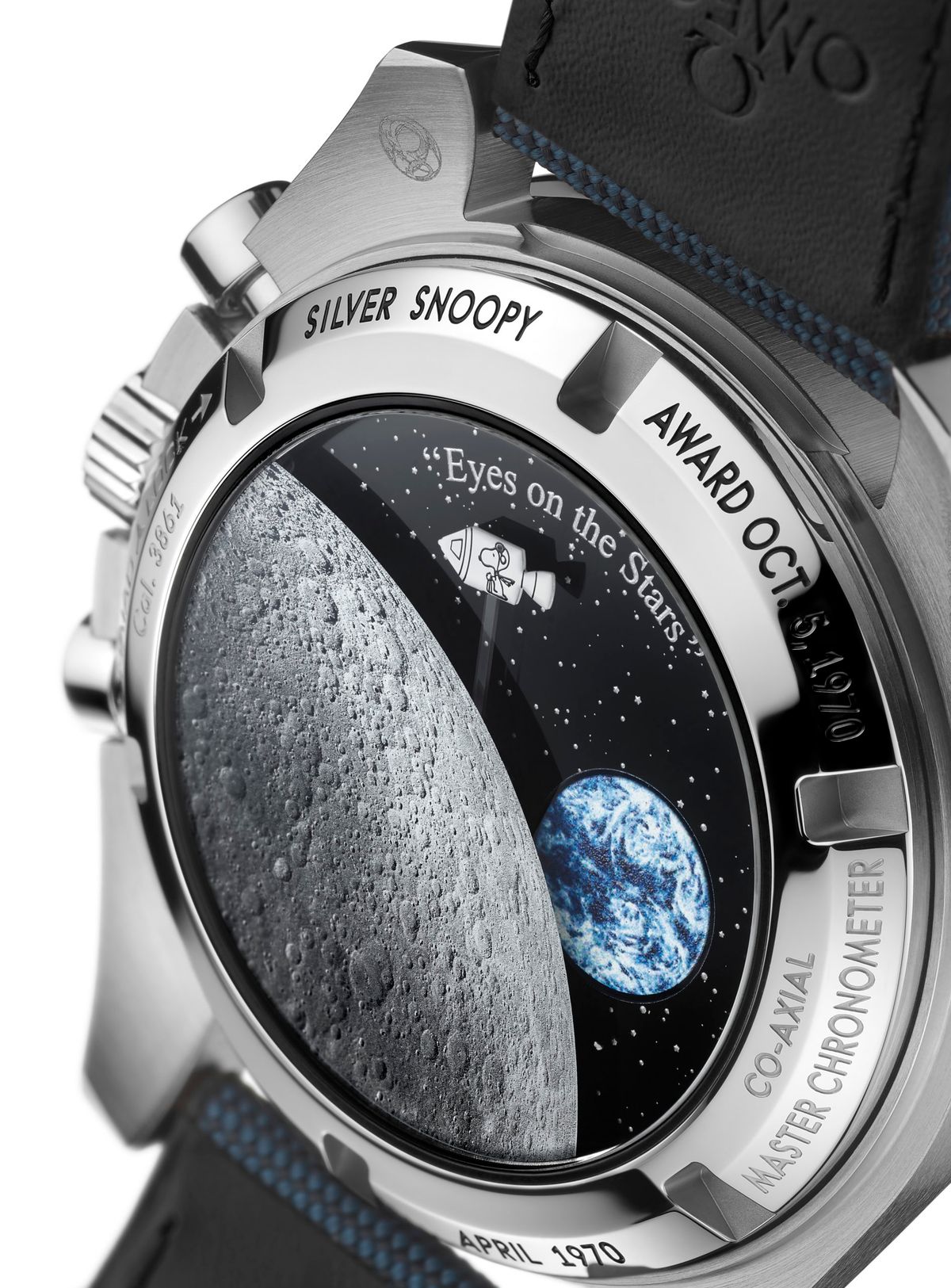