Swiss watchmaker, Longines, which traces its history back to 1832, has enjoyed a long and storied history based on the principles of tradition, elegance, and performance. Today, the company offers an immense catalog of watch styles, ranging from dressy to casual to sporty. Longines is generally classified as a mid-luxury brand, which means that when you buy Longines watches, you’re getting a lot of value for a reasonable price. Longines has been focused on adding even more value to its watches with interesting movements or functions, striking colors, different materials, and thoughtful size additions – which of course makes the watch enthusiast crowd happy!

One particular area of the brand’s catalog that has gained a great deal of attention in recent years is the Longines Heritage range. As the name suggests, Longines Heritage watches are modern reissues of historically important pieces from Longines’ vast archive. While Longines has been releasing contemporary versions of vintage models since at least the 1980s, the company has doubled down over the last decade or so to satisfy the demand for these types of watches in the market. Between the vintage pieces in the Longines Museum in Saint-Imier, Switzerland and the company’s extensive and well-documented historical archives, Longines has plenty to draw from.

As mentioned, Longines’ current catalog is a broad one, which can be overwhelming to comb through if you don’t know exactly what you’re looking for. Plus, the Heritage watches by Longines aren’t all housed together in one collection. So, we’ve put together a handy Longines Heritage buying guide to cover all the current production models.

Click here for our Ultimate Buying Guide on Longines watches. 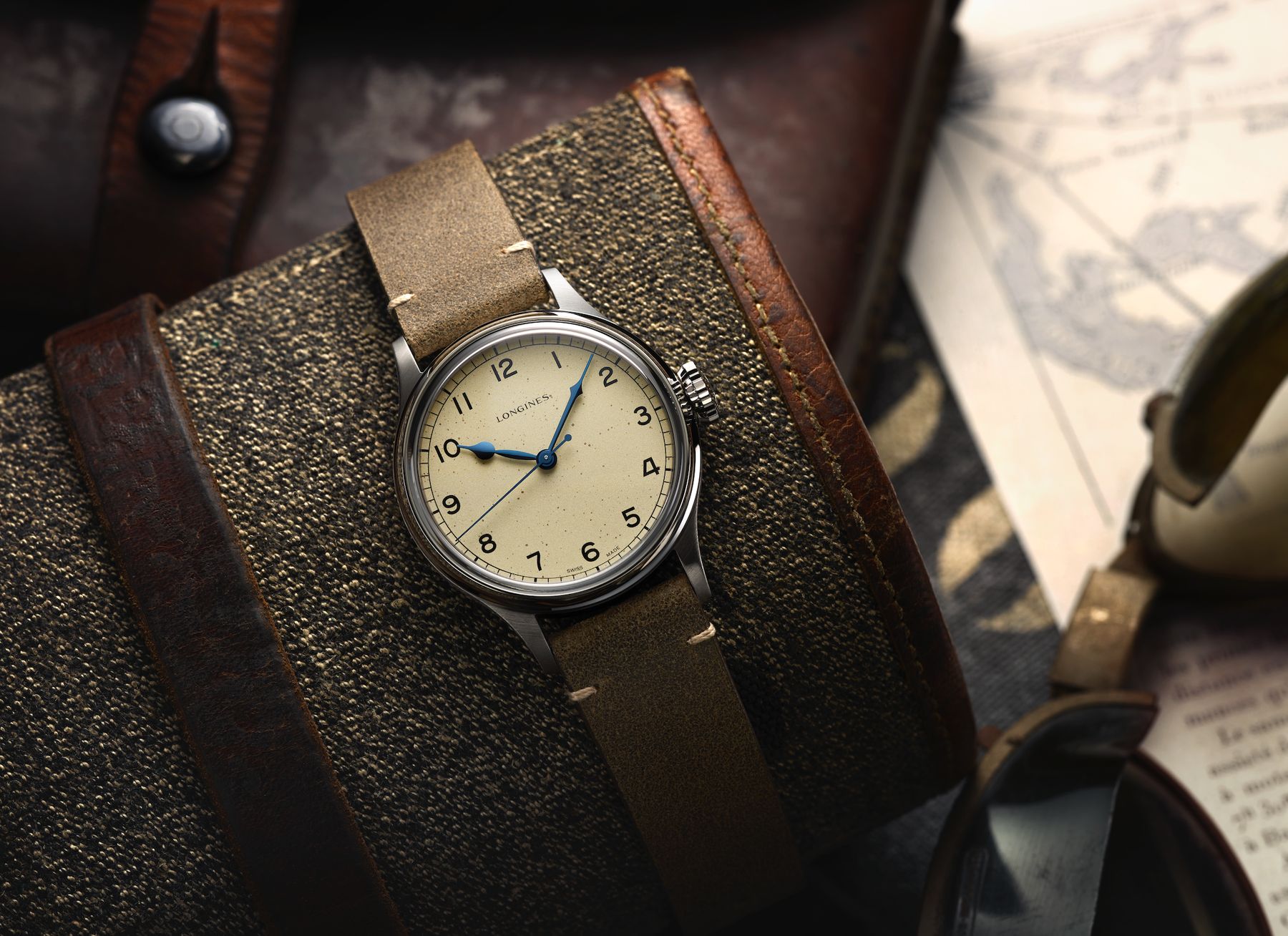 About the Longines Heritage Range

The Longines Heritage watches are not housed in one single collection, but instead, you can find them peppered throughout the brand’s catalog. This is because Longines first segments its watch collection into Classic and Sport series, then each of those segments is further divided into sub-collections – and revival watches can belong to both those main groups.

Currently, Longines has three dedicated Heritage collections: Heritage Classic, Heritage Avigation, and Heritage Military. These are the three lines that we’ll be exploring in this Longines Heritage buying guide. 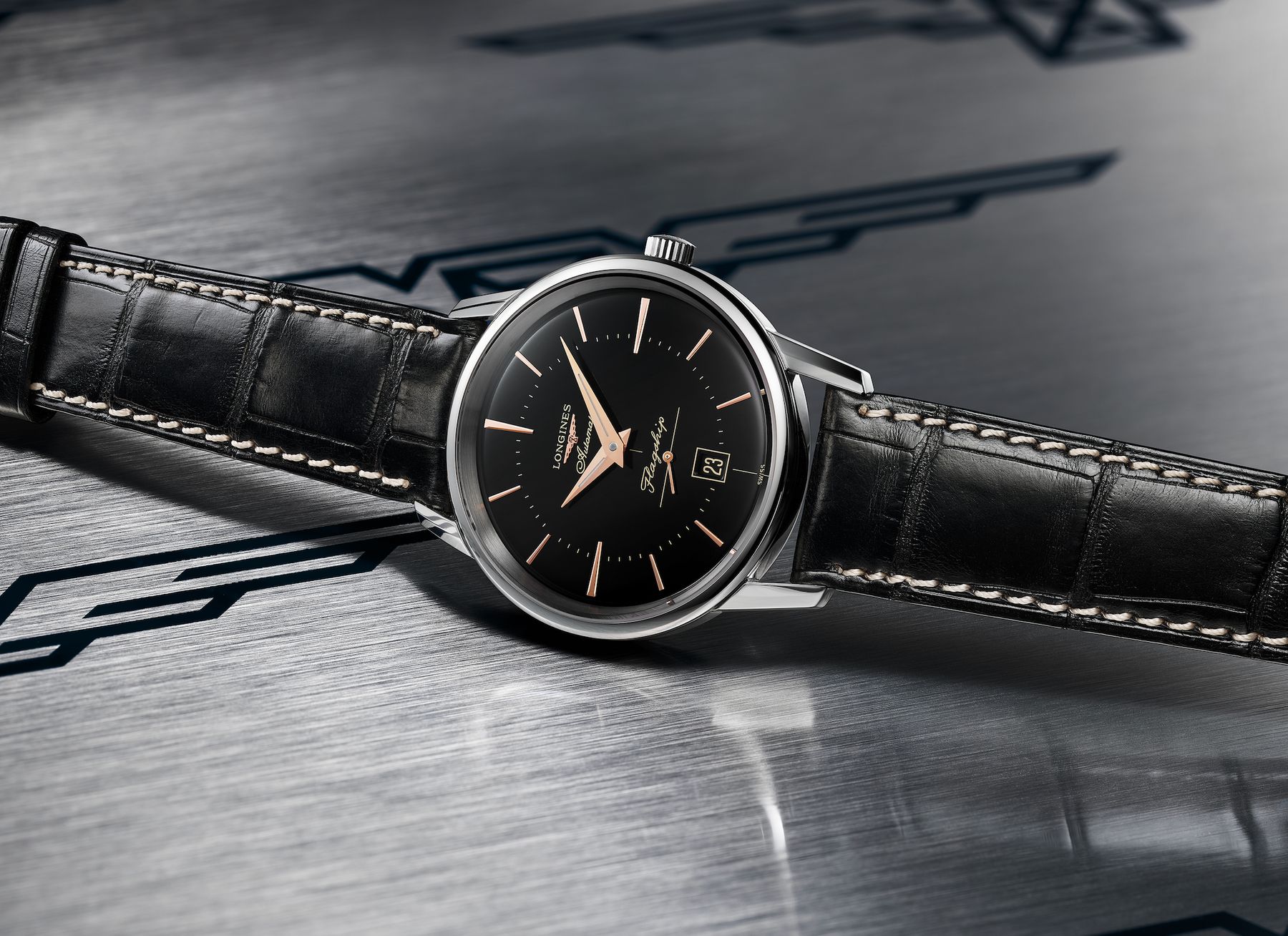 The Heritage Classic collection is home to several different vintage-inspired Longines watches, mostly drawing from the brand’s timepieces from the early to mid-20th Century.

The Longines Heritage Classic watches are handsome three-hander timepieces that sport 38.5mm stainless steel round cases, smooth steel bezels, and automatic movements. The dials feature a pair of hands for the hours and minutes while the running seconds are displayed in a sub-dial at 6 o’clock. The Longines Heritage Classic watches are offered with the choice of a 1930-style sector dial or a 1940-style tuxedo dial.

The Longines Heritage Classic Chronograph has a similar dial style to the Heritage Classic Tuxedo but with added chronograph requirements such as a pair of counters at the center and a tachymeter scale around the periphery. The watch includes a 40mm steel case, which is topped with a beautifully domed sapphire crystal and houses an automatic movement inside.

The original vintage Longines Silver Arrow debuted in 1956, named after the famous Mercedes-Benz racing cars. The watch may have taken its name from an automobile but its official symbol was a supersonic plane – which remains on the caseback of the 38.5mm steel case of the modern version. The understated self-winding watch features a silver opaline dial with striated indexes, lance-shaped hands, and the Silver Arrow name.

Longines launched the Flagship collection back in 1957. The current-production Heritage Flagship watches remain faithful to the designs of the early models with traits such as domed dials, applied and faceted trapezoid indexes, dauphine-shaped hands, and a running seconds indicator and date window above 6 o’clock. Available with either a black dial with rose gold-plated details or a silver dial with yellow gold-plated details, the 38.5mm Longines Heritage watches benefit from modern updates like sapphire crystals and automatic movements.

Made in honor of the original Conquest watch that debuted in 1954, the Longines Heritage Conquest again mixes appealing vintage design touches with important modern updates. The watch features a 40mm stainless steel case – significantly larger than the original 35mm – along with a date window at 12 o’clock and a self-winding movement inside. The silver sunray dial includes golden hands that point to multi-faceted applied markers, which mimic those on the 1954 models. The “Conquest” name is inscribed on the dials in the original typeface and the caseback is furnished with the gold and enamel medallion similar to those on vintage models. 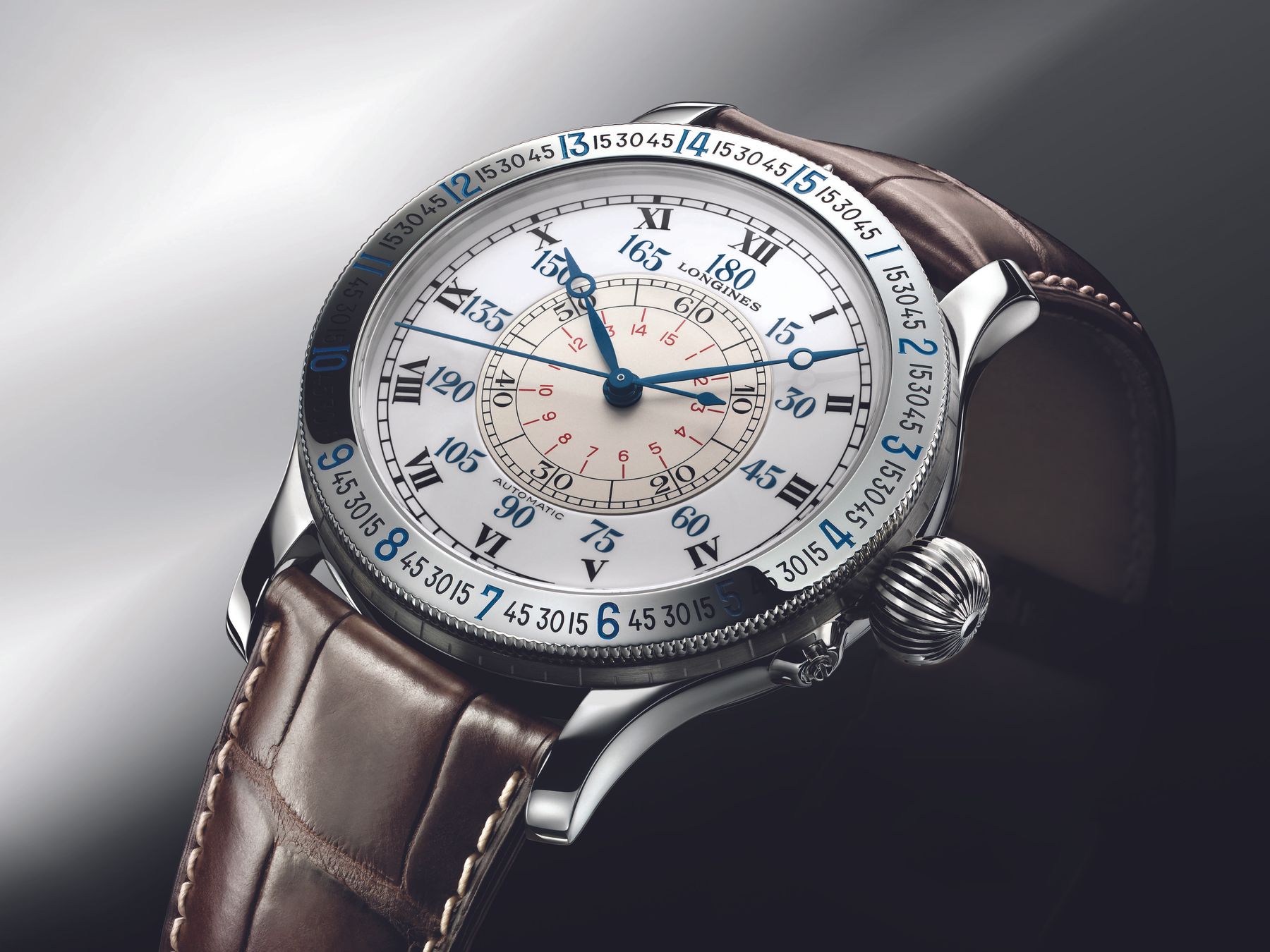 Longines has an impressive history of making pilot watches, starting from the earliest days of aviation. Aviation legends such as Charles Lindbergh, Howard Hughs, and Amelia Earhart relied on Longines watches and navigation instruments. The Heritage Avigation (a combination of the words “aviation” and “navigation”) serves to highlight historical Longines aviator watches.

The Avigation BigEye was not conceived from a drawing from the company’s archives but rather, it was inspired by a 1930s piece that Longines purchased from a collector to join the brand’s museum. The Avigation BigEye features a 41mm case, large Arabic numerals, three counters on the dial, a pair of pushers flanking the winding crown, and an automatic chronograph movement powering it. The first version, which was in stainless steel with a black dial, won the Revival award at the 2017 Grand Prix de l’Horlogerie de Genève (GPHG). Longines has since expanded the offering with an even sportier titanium version with a striking blue dial.

Based on a set of design standards set out by the U.S. Army in the 1930s, the Longines Avigation Type A-7’s most distinctive feature is its tilted alignment. The 41mm steel watch is an automatic mono-pusher chronograph, and the pusher is positioned on the top right side of the case. The angled dial was designed to be worn on the inside of the wrist so that it would be aligned with the aircraft’s instruments – and the pilot could read it without letting go of the controls.

The Lindbergh Hour Angle is what kicked off the entire Longines Heritage range back in 1987. The company decided to make a commemorative version of the Longines watch designed by Charles Lindbergh and Captain Weems to celebrate the 60th anniversary of the pilot’s historic solo nonstop flight across the Atlantic Ocean. The 1987 version of the Lindbergh Hour Angle was such a success that it paved the way for all the vintage Longines re-issues that have filled the Heritage collection thus far.

The current-production Longines Lindbergh Hour Angle retains the very large 47.5mm steel case of the original, as well as Captain Weems’ inventive design whereby the internal rotating dial could synchronize the seconds hand with a radio time signal and the rotating bezel could adjust to daily variations of the equation of time. 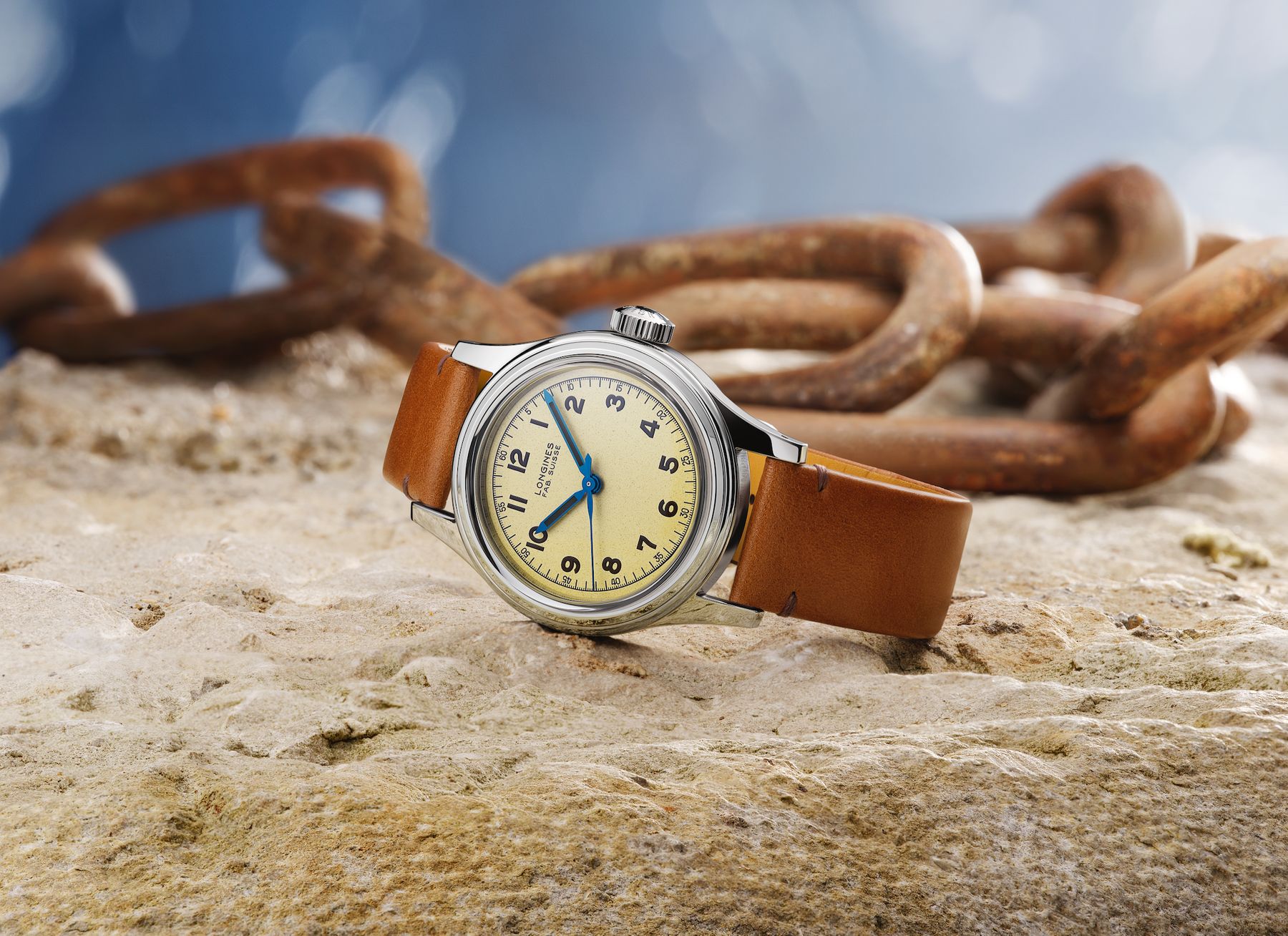 Like several other Swiss watchmakers in the early 20th Century, Longines played a big role in supplying watches for various military outfits. The Heritage Military Collection is home to reissues of these vintage mil-spec watches.

The Longines Heritage Military watch is based upon a 1940s watch that was designed for the British Royal Air Force during World War II. The 38.5mm steel case features an off-white dial made to look aged, complete with hand-sprayed tiny black droplets, which makes each piece slightly different. The trio of blue hands on the dial point to Arabic numerals and are driven by an automatic movement.

On the other hand, the Longines Heritage Military Marine Nationale draws inspiration from watches supplied to French Navy after World War II. While the modern reissue is bigger than the original ref. 5774 (now sized at 38.5mm) and runs on an automatic movement instead of a hand-wound one, the design between old and new remains very similar. The watch even includes the “Fab Suisse” inscription on the creamy beige dial, which is also home to blued steel hands. 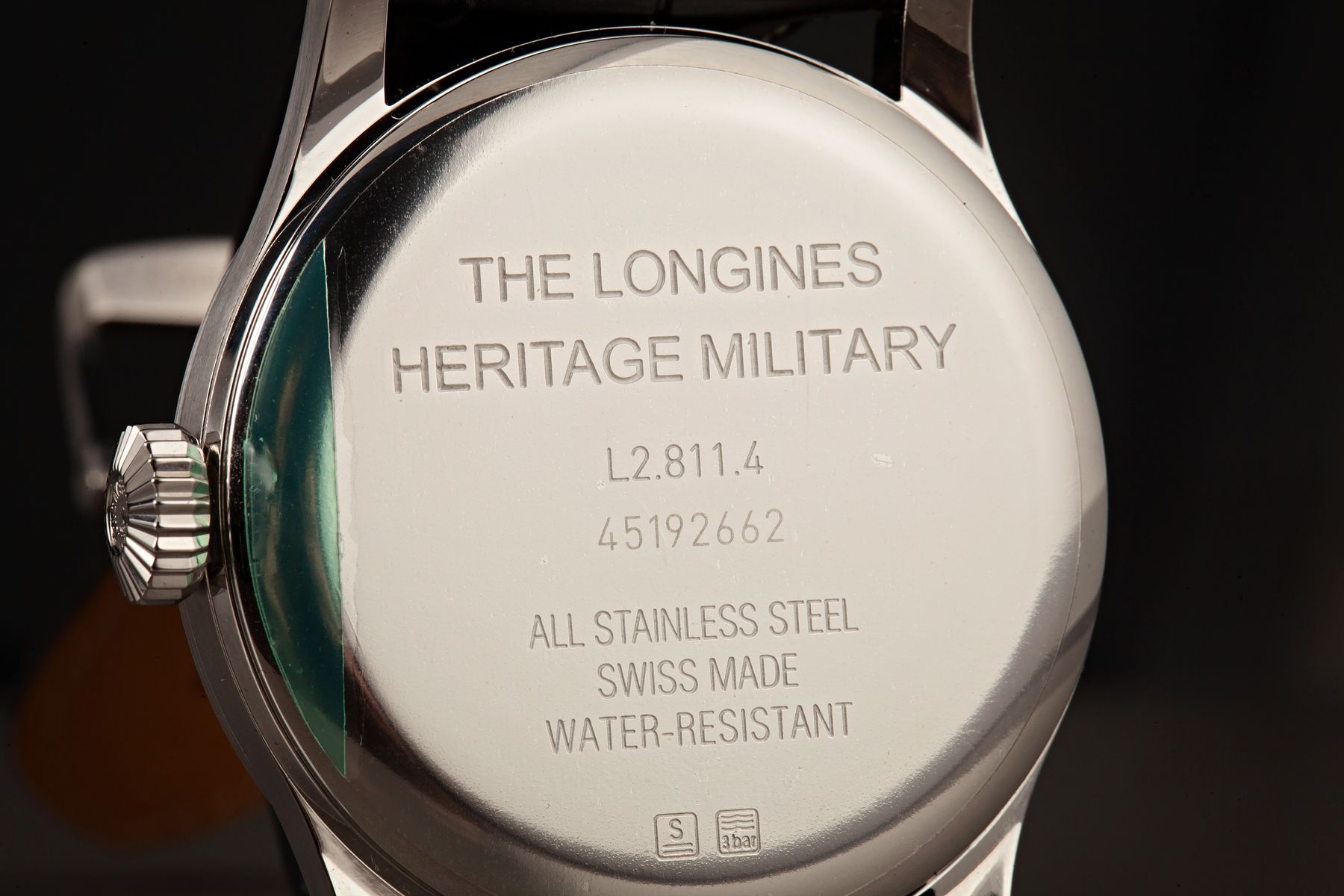 While many brands have now joined in with the vintage reissue trend, it’s important to remember that Longines was one of the first to fully embrace it. Plus, Longines is also one of the best when it comes to reviving archival watches.

The Longines Heritage range is a popular one with watch enthusiasts because the brand has successfully bridged that gap between the appeal of old-school style and modern expectations. Additionally, the value-driven prices of Longines Heritage pieces only serve to make these watches even more attractive.

What the Longines Heritage line offers is a way for buyers to experience vintage-like watches without the challenges one can face with old watches. Modern touches like robust automatic movements, scratch-resistant sapphire crystals, bright Super-LumiNova, and better case and bracelet materials are important updates that we can all appreciate. But most importantly, these enhancements certainly don’t take away from the vintage aesthetics that make these Longines Heritage pieces so appealing. 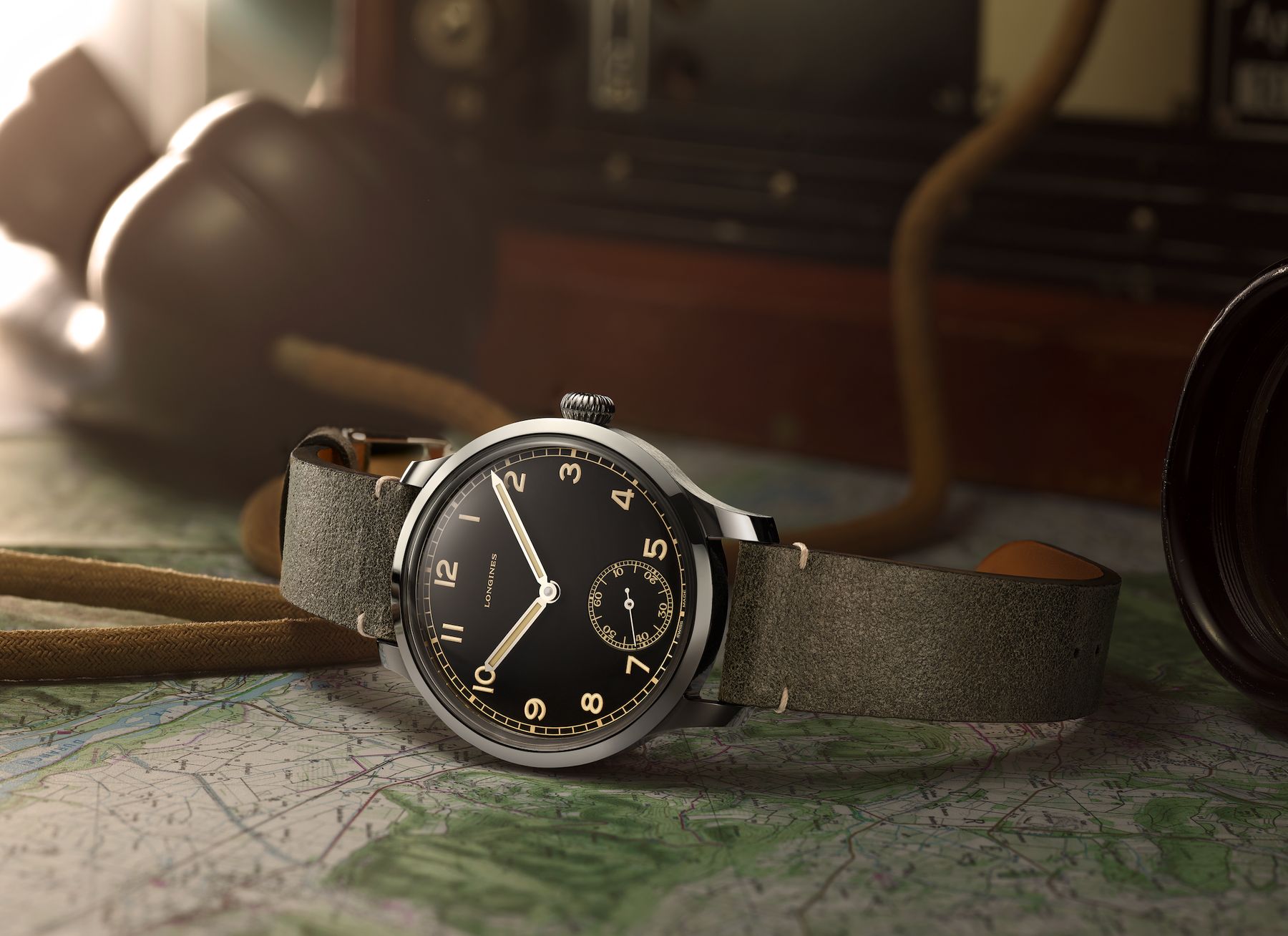