Those new to the world of watch collecting can often find themselves overwhelmed by the sheer amount of choice the industry offers. Especially for men, there is a bevy of high-quality brands, across a wide variety of price points, and each one seems to have a bewildering number of different models in their portfolio. You can have men’s luxury watches designed to do nothing more than look good while telling you the time, as well as ones built to serve specific purposes, whether you want to go diving, record race laps, keep track of another time zone, etc.

It can all get a bit much, so we have put together a list of six of the very top manufacturers and chosen an ideal starting point for each – all of these men’s luxury watches can stand alone as ‘the one good watch’ or together will form an awesome collection. 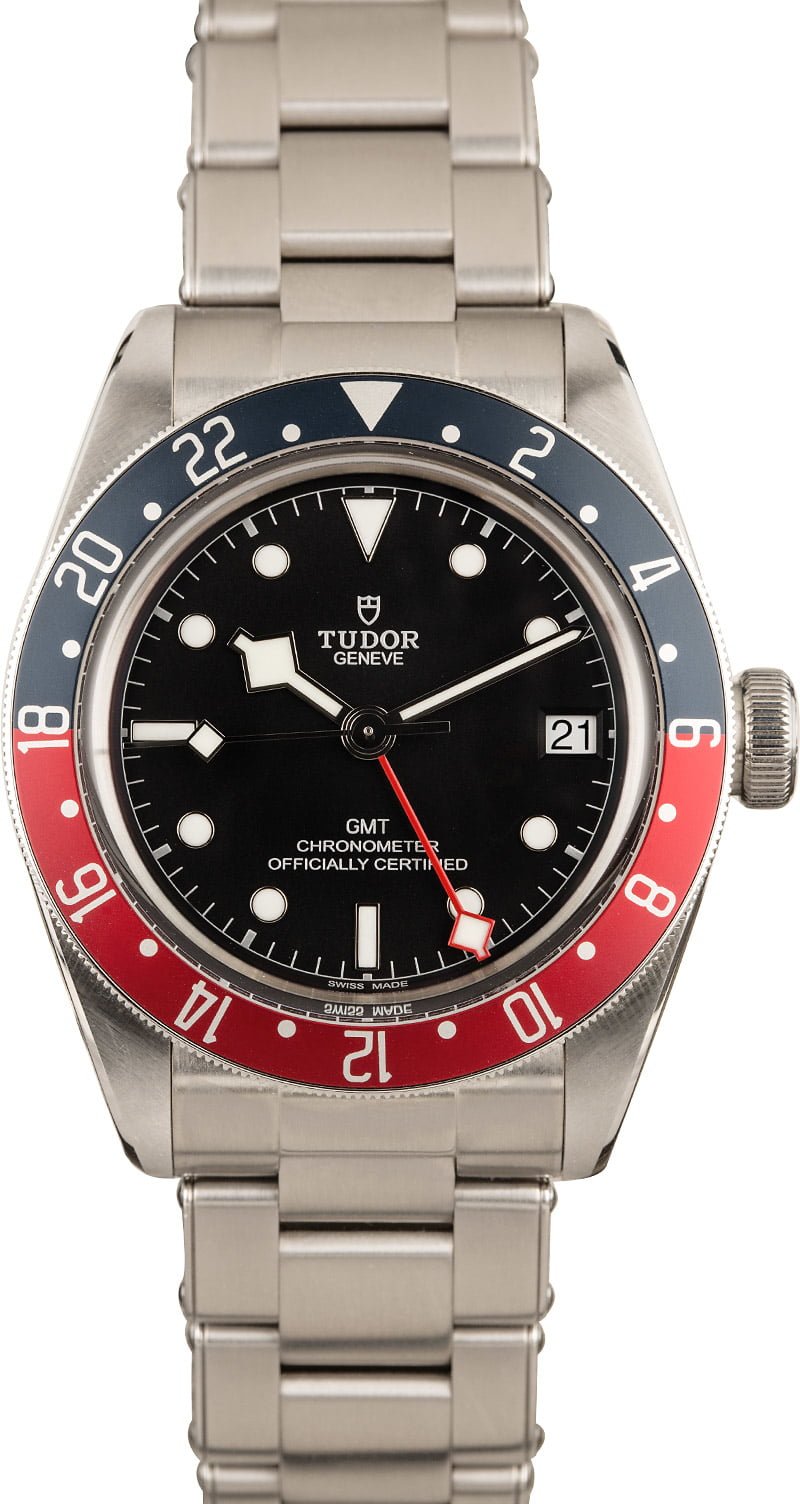 More than any other collection, it is Tudor’s Black Bay series which has dragged the brand out of the massive shadow of their illustrious parent company, Rolex. Once seen as the brand for those who couldn’t afford the ‘real thing’ (sometimes called “the poor man’s Rolex”), Tudor is now very much settled in with its own identity, and it has done so by drawing from past glories.

The Tudor Black Bay GMT was launched at Baselworld in 2018 and almost stole the limelight from Rolex’s relaunch of an all-time classic of their own, a stainless steel GMT-Master with a Pepsi bezel. Tudor’s GMT watch embraces the same blue and red color scheme but also adopts a real vintage-inspired aesthetic, which has made it a hugely successful addition to their extensive catalog and one of the most popular men’s luxury watches currently on the market.

A 41mm steel case with a domed crystal and an oversized, unprotected crown hits all the right nostalgic notes, and an in-house movement (the Caliber MT5652) leaves it a cut above a generic ETA-powered alternative. A stunning inclusion from a highly impressive brand, the Tudor Black Bay GMT deserves a place in any collection of luxury watches. 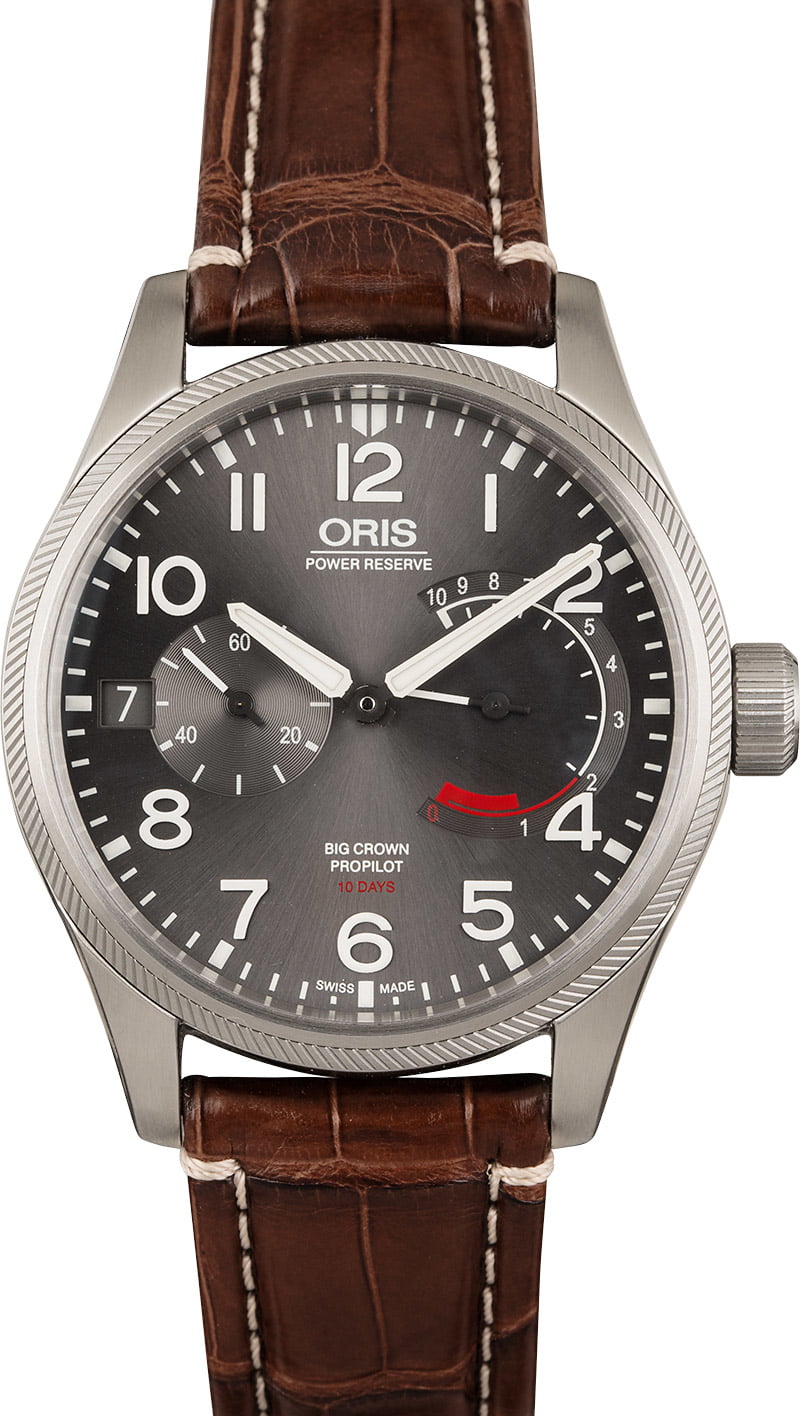 We have a real soft spot for Oris here at Bob’s Watches. The brand has a remarkably diverse assortment of men’s luxury watches on offer, and its products represent some of the best values for the money within the entire industry. Possibly best known for their dive watches these days, with the success of both their Aquis and vintage-inspired Sixty-Five collections, our choice here takes us back to the roots of the company and belongs to their aviation series.

The original Big Crown ProPilot was released in 1938, during flying’s first true golden age. Many of the elements essential in a pilot’s watch are present in this latest piece; at 44mm, it is a fairly large timepiece, and together with dark dials and high-contrast bright white handsets, it offers an especially legible display. The crown measures 8mm, making it is easier to grip while wearing gloves, and the big, bold Arabic numeral indexes are swamped in Super-LumiNova.

Best of all, the movement is something very special. Another homegrown effort, the Caliber 111 is a manually-wound mechanism offering an incredible 10-day autonomy, complete with its non-linear power reserve indicator on the dial, alongside a small-seconds counter. One of the first movements that Oris has produced themselves after a 35-year lay-off, it adds a significant value proposition to a watch already offering some of the most bang for your buck in the game. Overall, the Oris Big Crown ProPilot Caliber 111 is a handsomely rugged model well worth your consideration. 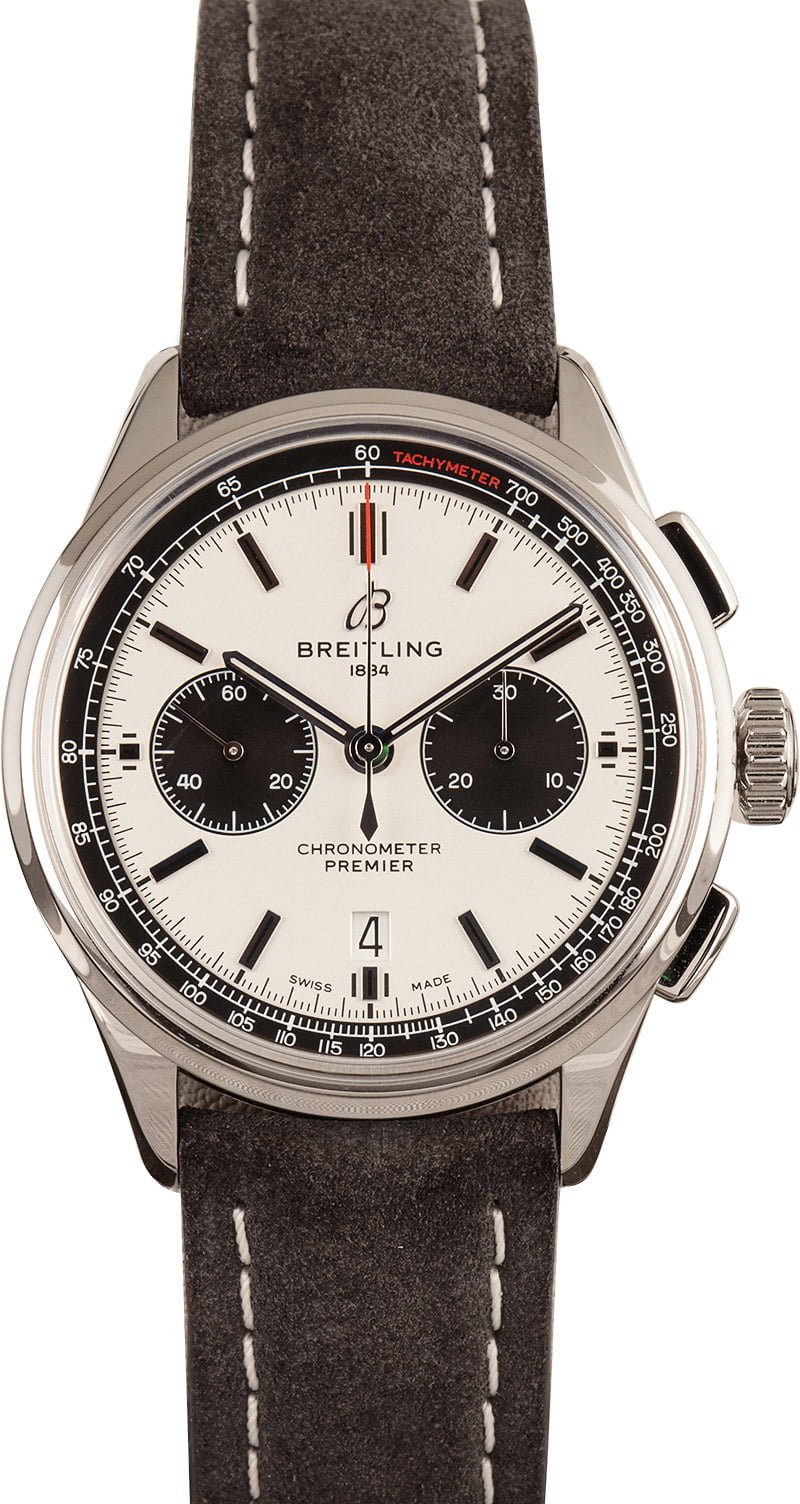 Swiss watchmaker Breitling has been going through a major upheaval in the last couple of years or so, ever since recently-installed CEO, Georges Kern made it is his mission to reinvent the brand. There have been a host of fascinating and noteworthy models released, some continuing along the company’s new direction for state-of-the-art wearable tech, but others from pretty much the opposite end of the spectrum – vintage-inspired and smartly elegant models that favor tasteful restraint over Breitling’s typical hyper-masculine design language.

The Breitling Premier B01 is such a watch, a 42mm chronograph that takes its design cues from the 1940s originals, but one with a level of finishing and versatility that is truly remarkable. The curved lugs and low profile case keep the piece beautifully balanced on the wrist, while the multi-stepped polished bezel adds a subtle and welcome design flourish. Inside resides the company’s first in-house chronograph movement, the COSC-certified Cal. B01, which is considered to be one of the finest of its type produced in recent years.

Available in 18k red gold, it is the stainless steel models that offer the most all-around versatility. Dial colors of blue and Bentley green are definite eye-catchers, but the black and white panda is a particular favorite, a wonderful retro throwback that really captures the essence of Breitling itself. A superb timepiece from a manufacturer in great form, the Breitling Premier B01 chronograph is a fantastic option among the various men’s luxury watches currently available. 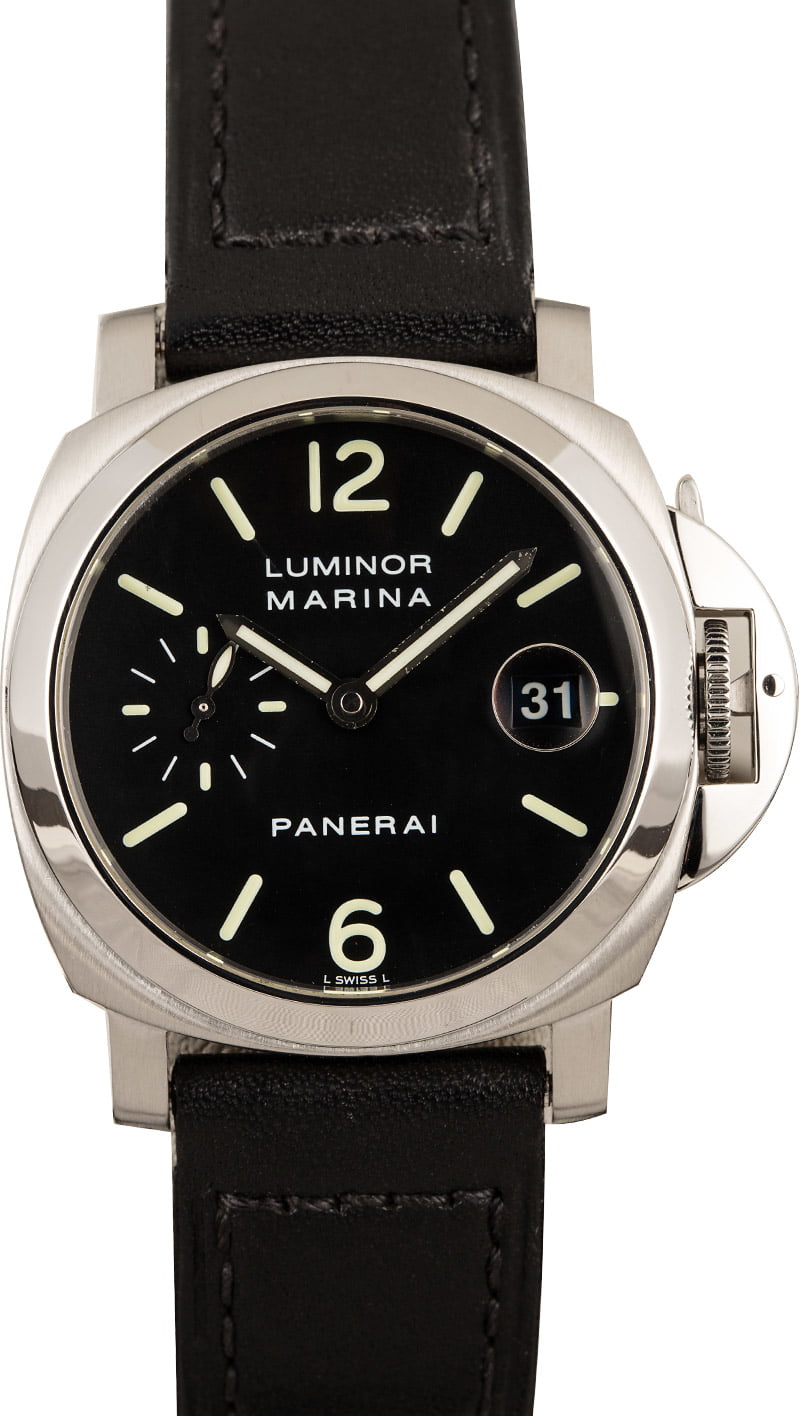 One of the most instantly recognizable outlines in horology, the Panerai Luminor was only opened up for sale to the general public in 1993, after decades of being a purely military-issue watch. With its squat, cushion-shaped case and iconic crown guard system, the Luminor is most certainly a model designed for action, and is a direct descendant of the pieces created for the underwater commandos of the Italian Royal Navy.

Earlier versions wore extremely large, in sizes ranging from 44mm to 47mm, but more recently, Panerai has brought the dimensions of its signature watch down to far more manageable proportions, including this one, the 40mm PAM048. It is now the ideal choice for anyone who has always loved the aesthetic of the Panerai Luminor but lacked the Sylvester Stallone-like forearms to carry off the larger variants

Inside the robust stainless steel case resides the Panerai OP III movement, which beats at 28,800vph and offers users a 50-hour reserve. The OP III is based on an ETA 7750 but has the chronograph components removed, which allows Panerai to keep the running seconds sub-dial at 9 o’clock. Upfront, the black ‘sausage dial’ features raised hour markers and includes both running seconds sub-dial and a date display, complete with an internal magnifying lens on the underside of the crystal. Just about as masculine as a watch can be, and extremely capable with its 300m water resistance, the Panerai Luminor Marina is something of a legend in the business and ranks among the most distinctive men’s luxury watches ever made. 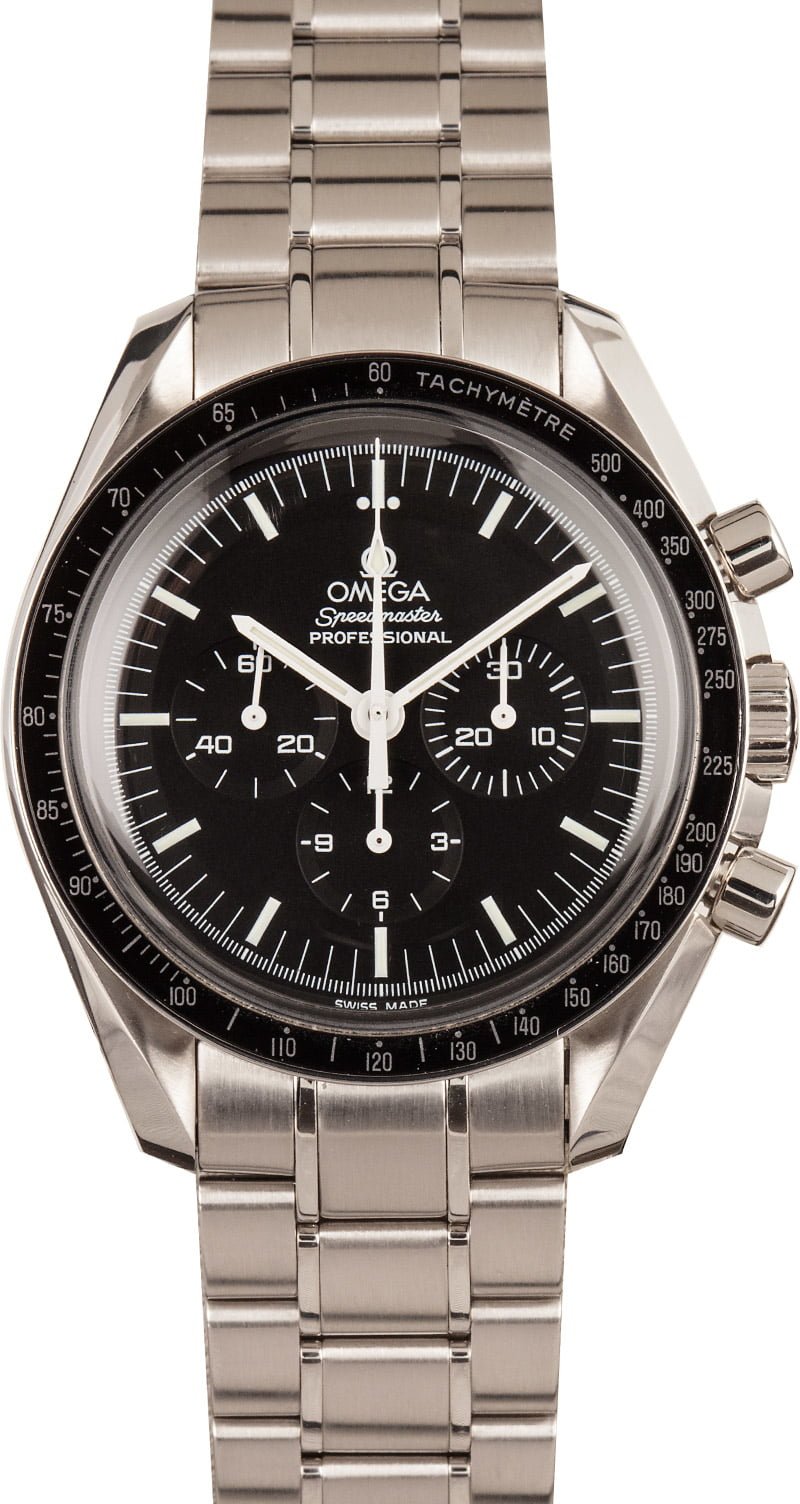 The Omega Speedmaster is undeniably one of the world’s truly legendary models, the first watch to be flight-qualified by NASA and also the first worn on the moon. The original Speedmaster chronograph model was released as one-third of a trio of purpose-built watches in 1957, along with the inaugural Seamaster and Railmaster, together making up what is known as the Professional Collection.

From there, the Speedmaster has diversified into a plethora of different types, but there has long been a Moonwatch, so named after experiencing the lunar surface for itself, worn by Buzz Aldrin. The current version is an almost entirely faithful recreation of that historic piece, the famously asymmetrical 42mm steel case housing a black dial with high contrast white detailing and the traditional tri-compax register layout. You can even have a version with the period-correct Hesalite crystal over the top.

The Omega Speedmaster was the first watch to move the tachymeter scale onto the bezel rather than being printed around the edge of the dial, and the classic thin black bezel is present and correct on many of the versions that Omega still produces today. Inside, the manually-wound caliber 1861 is a direct descendant of the original movements that accompanied astronauts to the moon. Quite conceivably the most revered mechanical chronograph of all time (with the possible exception of the Rolex Daytona), and easily one of the most recognizable men’s luxury watches ever produced, the Omega Speedmaster Professional Moonwatch marries timeless styling with a heritage that will never be matched.

So far, we have covered watches that will provide exceptional service on land (Tudor and Breitling), sea (Panerai), air (Oris), and even in space (Omega). However, if you wanted a model that you could effortlessly wear every day, in any situation, and one that will continue to perform long enough to be passed down to a the next generation, a Rolex Datejust has to head up the list.

A revolution when it was originally launched in 1945, it was the first self-winding, waterproof wristwatch ever made to display a date function. Over the years, its aesthetics have barely changed, but its movements and materials have stayed on the very cutting edge of what is possible. Today the Datejust is offered in a total of five different sizes and with enough variety in metal, bezel type, dial color, and bracelet style to appeal to anyone’s tastes. The underlying architecture may be simplicity itself, but the sheer number of different connotations in which it is offered makes it one of the most chameleonic men’s luxury watches on the market.

For many fans of the brand, the Datejust is the absolute heart of Rolex, even more so than some of the other big names such as the Submariner, GMT-Master, or Daytona. Perhaps the most accomplished all-rounder currently available, it can be quietly understated or unreservedly grandstanding, along with absolutely everything in between. A faultless blend of classic looks and contemporary technology, the Rolex Datejust might be the only watch you ever need.