In the 1950s, Rolex debuted the Milgauss as a watch dedicated to the scientific community. Named for its ability to withstand 1,000 gauss, the antimagnetic Rolex Milgauss watches were part of the brand’s catalog for three decades until they were discontinued in 1988. However, Rolex revived the Milgauss in 2007, combining vintage design details like the lightning bolt seconds hand and modern considerations like a larger case and updated movement.

Within the modern Milgauss lineup, was one reference that featured a green sapphire crystal, also known as glace verte in French or ‘GV’ for short. Up until a few years ago, Rolex offered Milgauss watches with either a colorless sapphire crystal or a green one. Yet, if we take a closer look at the current Rolex catalog, it’s apparent that all non-GV models have been discontinued. Let’s examine further. 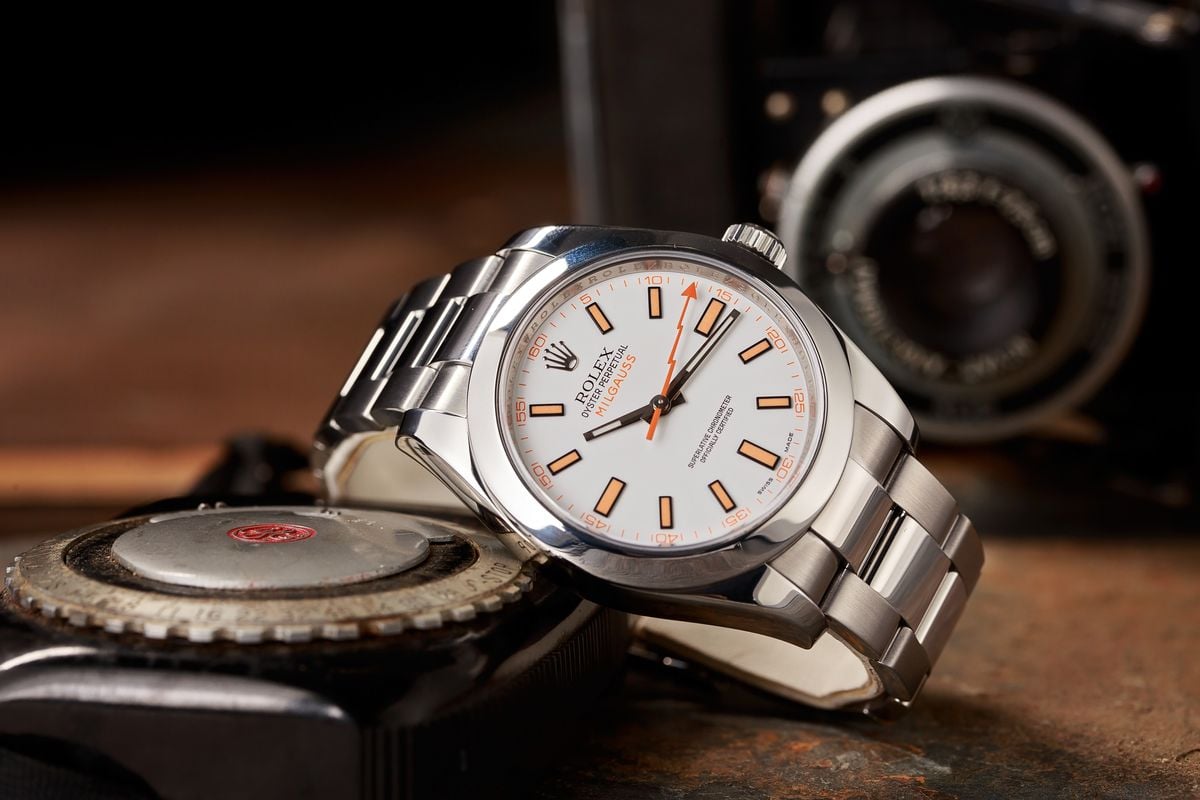 The Rolex Milgauss that made its debut in 2007 was the ref. 116400. The watch featured a 40mm stainless steel Oyster case fitted with a stainless steel Oyster bracelet. To achieve its magnetic resistance of 1,000 gauss, the modern Milgauss includes a ferromagnetic alloy shield inside the case to protect the automatic movement powering the watch.

The Milgauss’s movement is the Caliber 3131, which is also equipped with antimagnetic components such as Rolex’s proprietary blue Parachrom hairspring and a paramagnetic escape wheel. The Cal. 3131 provides users with up to 48 hours of power reserve when fully wound, and like all modern Rolex movements, it is chronometer certified. 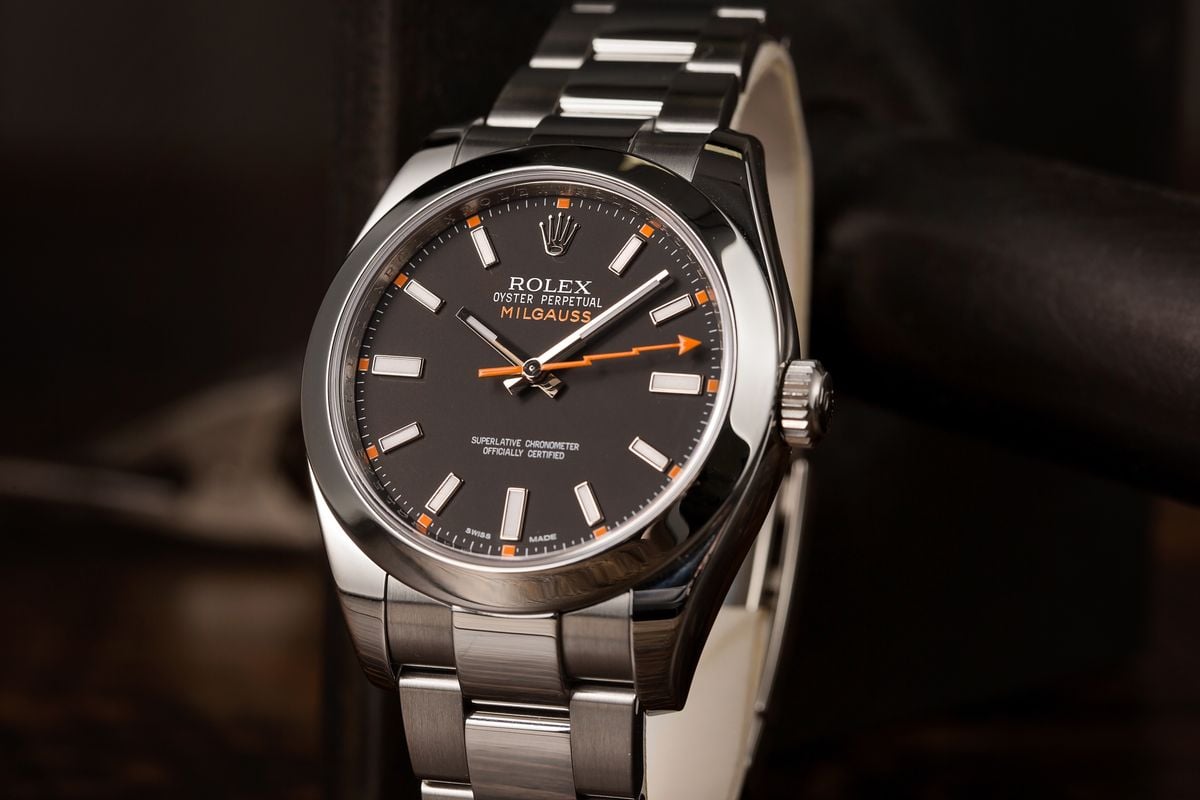 The dials of the new Milgauss included a seconds hand designed to look like a lightning bolt as a nod to the original model from the ‘50s. However, this time around, Rolex finished it bright orange to match other orange details on the dial. The straight hour and minute hands, along with the baton-style hour markers are all coated with lume for maximum visibility in the dark.

Interestingly, the early Milgauss ref. 116400 models included a combination of green glowing Super-LumiNova and blue glowing Chromalight luminescence, which made for a multi-colored display in the dark. Additionally like all Milgauss references ever made, the ref. 116400 is a time-only model, as the solid dial with no date or day windows allows for the maximum amount of magnetic resistance. 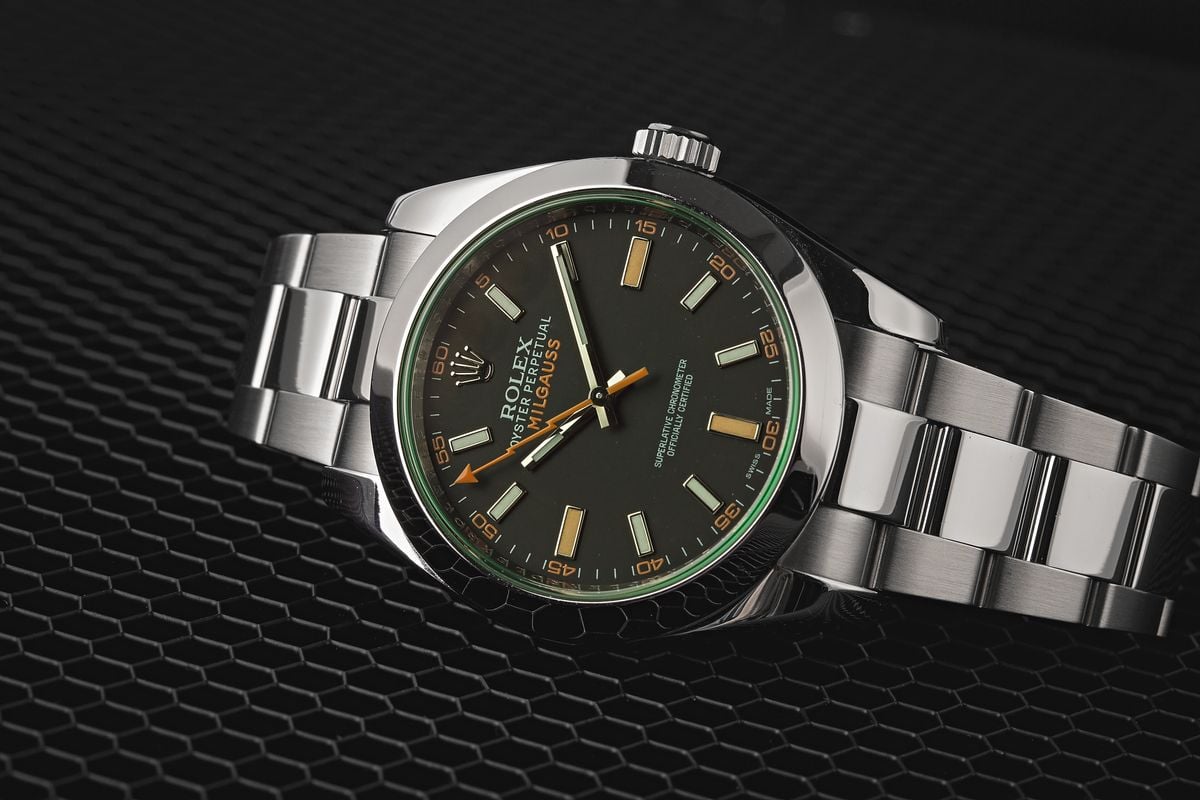 When it was introduced, the modern Milgauss came in three variations. There was a white dial version and a black dial version, both protected by traditional colorless sapphire crystals. The lume on black dial was the standard, white-colored, green-glowing variety; however the lume on the white dial version glowed blue in the dark but appeared orange in the light, further adding to its orange accents.

There was also a black dial version topped with a green sapphire crystal – the ref. 116400GV. Unlike the black dial found in the model with the clear crystal, this one featured the same blue-glowing, orange lume from the white dial model for the 3,6, and 9 hour makers, making for a dial that glowed two different colors. The ‘Glace Verte‘ model was designated as the Anniversary Milgauss and according to Rolex, the green-tinted sapphire crystal is so arduous and time-consuming to make that the company did not see the need to patent it. The green sapphire crystal is truly a unique design touch and makes the Milgauss GV look like its glowing at the edges.

In 2014, Rolex added yet another dial color to the Milgauss lineup and called it Z-Blue. The electric blue dial included the same orange lighting hand and orange details; however all of the lume was now Rolex’s blue-glowing Chromalight. Additionally, the new Z-Blue Milgauss came exclusively fitted with the green sapphire crystal from the anniversary-edition model. 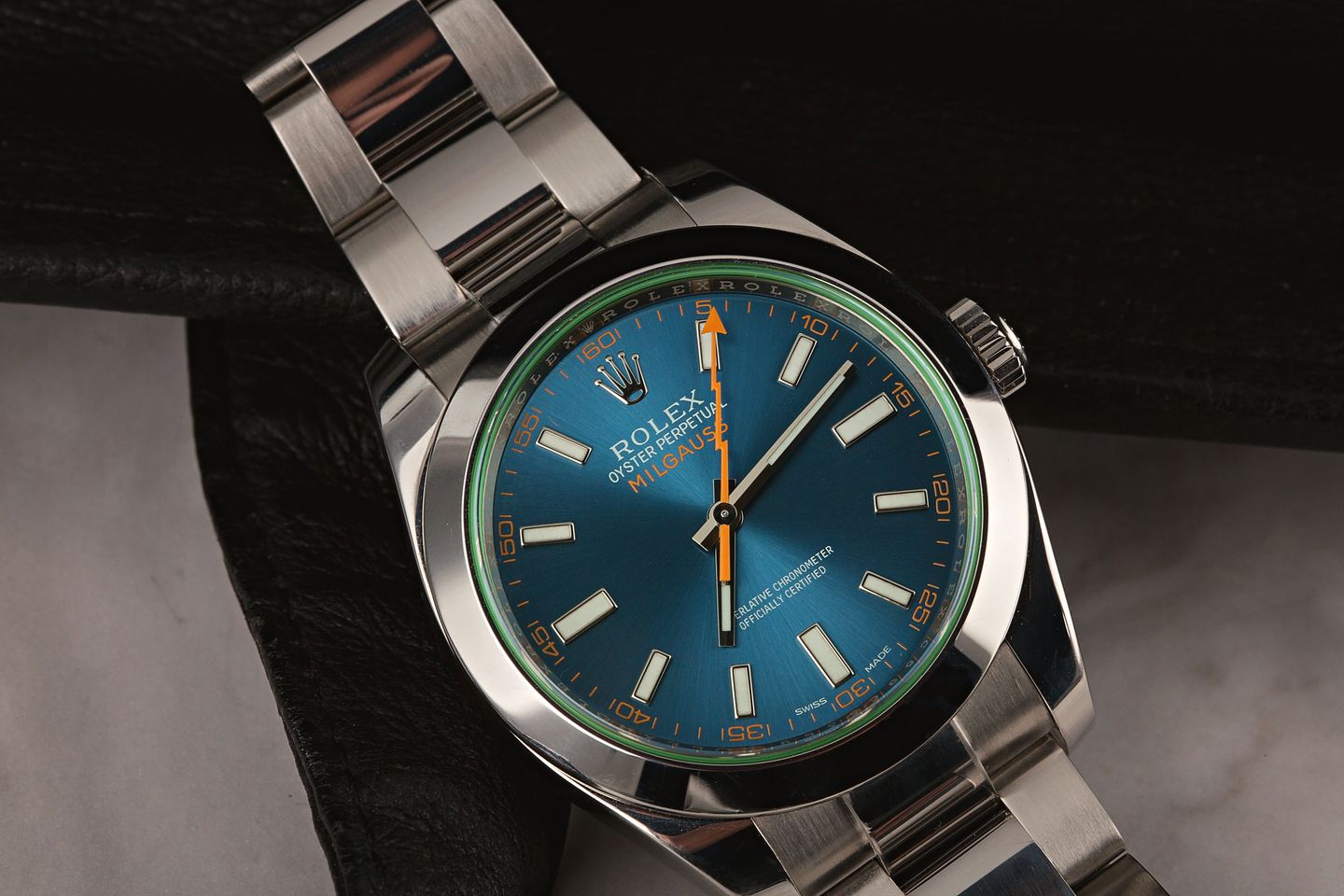 The Discontinuation of the Non-GV Milgauss 116400

The black dial version of the non-GV Milgauss was discontinued around 2013, meaning that this particular edition was only in production for about six years – quite a short time for a modern Rolex watch. The Milgauss with a black dial and clear sapphire was discontinued not long before the Z-Blue dial appeared the following year at Baselworld, so it could be said that the Z-blue dial replaced the second black dial option. 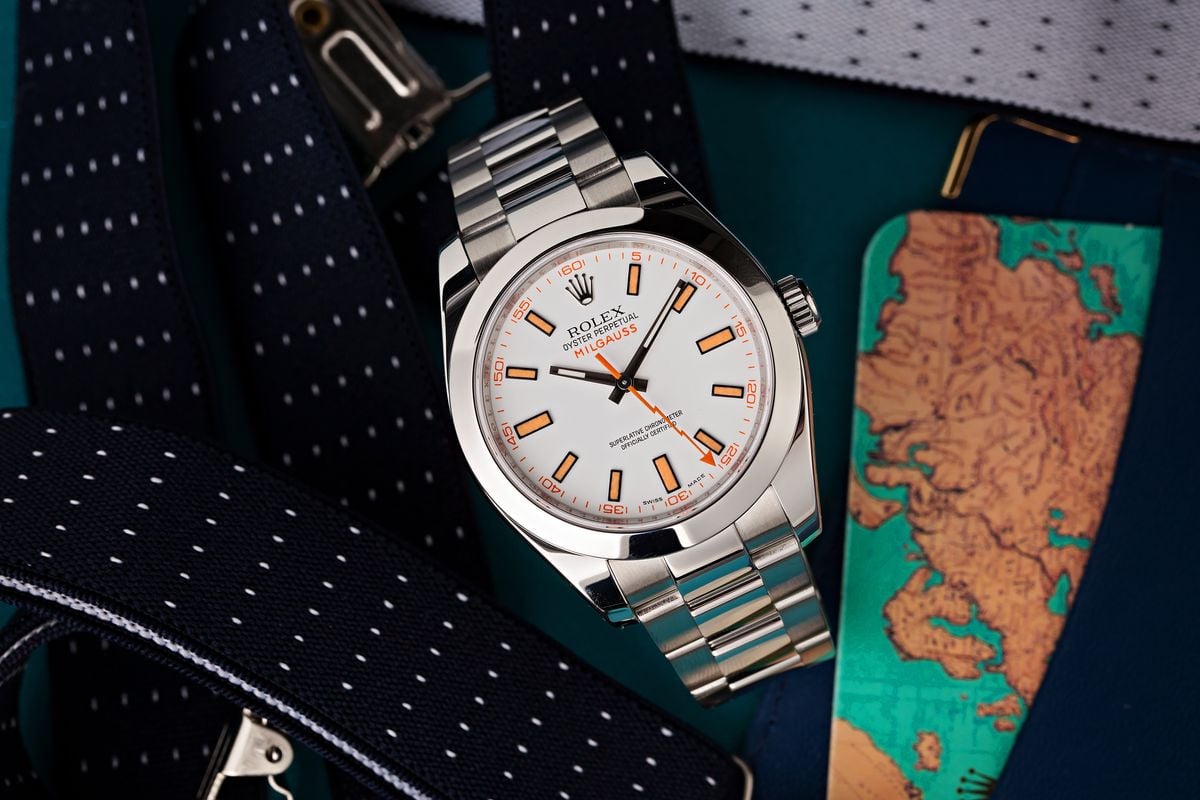 As of today, Rolex only offers the Milgauss with a green sapphire crystal – the Milgauss 116400GV with a black dial or a Z-Blue dial, both priced $8,300 at retail. Of course, for all those who prefer the modern Milgauss with a traditional colorless sapphire crystal, they are still readily available on the secondary market, and can even often be found for slightly less than examples with the newer  Z-Blue dials – at least at this point in time.

What are your thoughts about the revived Rolex Milgauss watch? Do you prefer it with a green crystal or without? Which version would you choose? Let us know in the comments below. 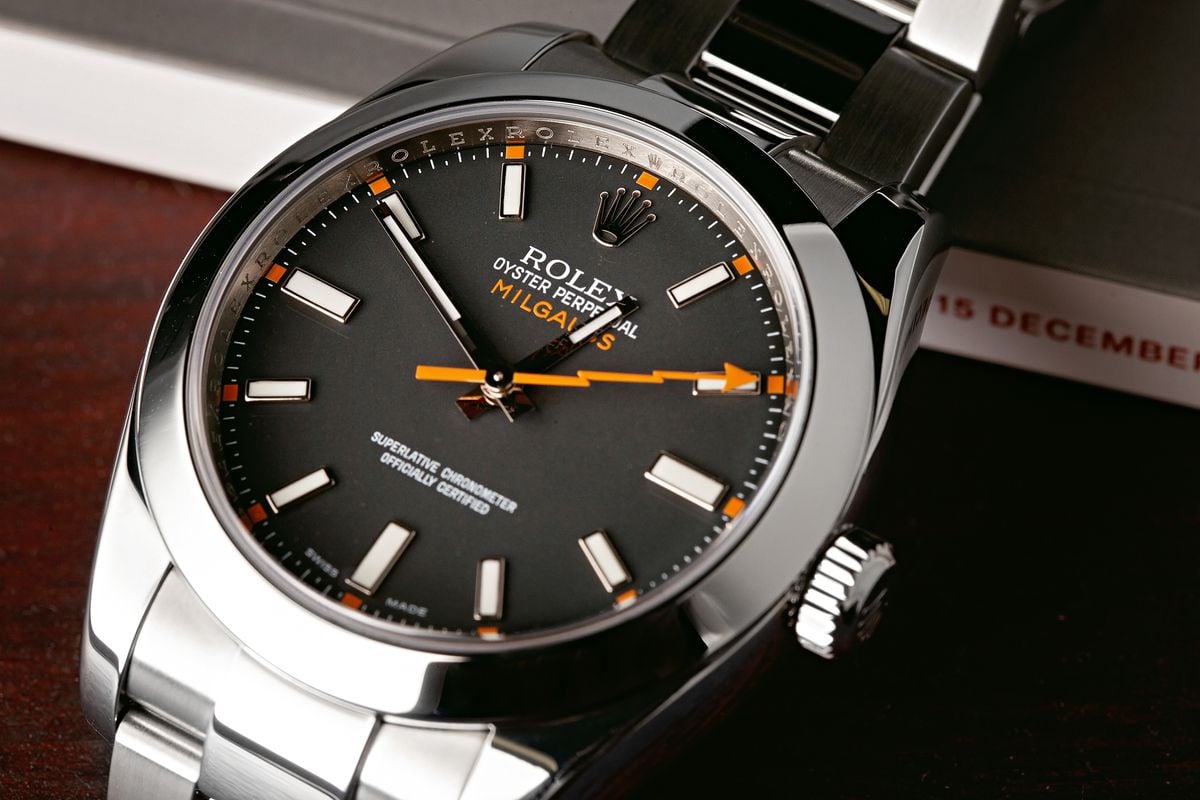