Join Us for Watch Madness!

It’s March and we’re mad about Rolex watches, so join us for Bob’s Watches first-ever Watch Madness event! We’re pitting 16 modern Rolex watches against 16 vintage Rolex watches and it’s up to you to vote on Instagram to decide which watches will move forward to the next round. 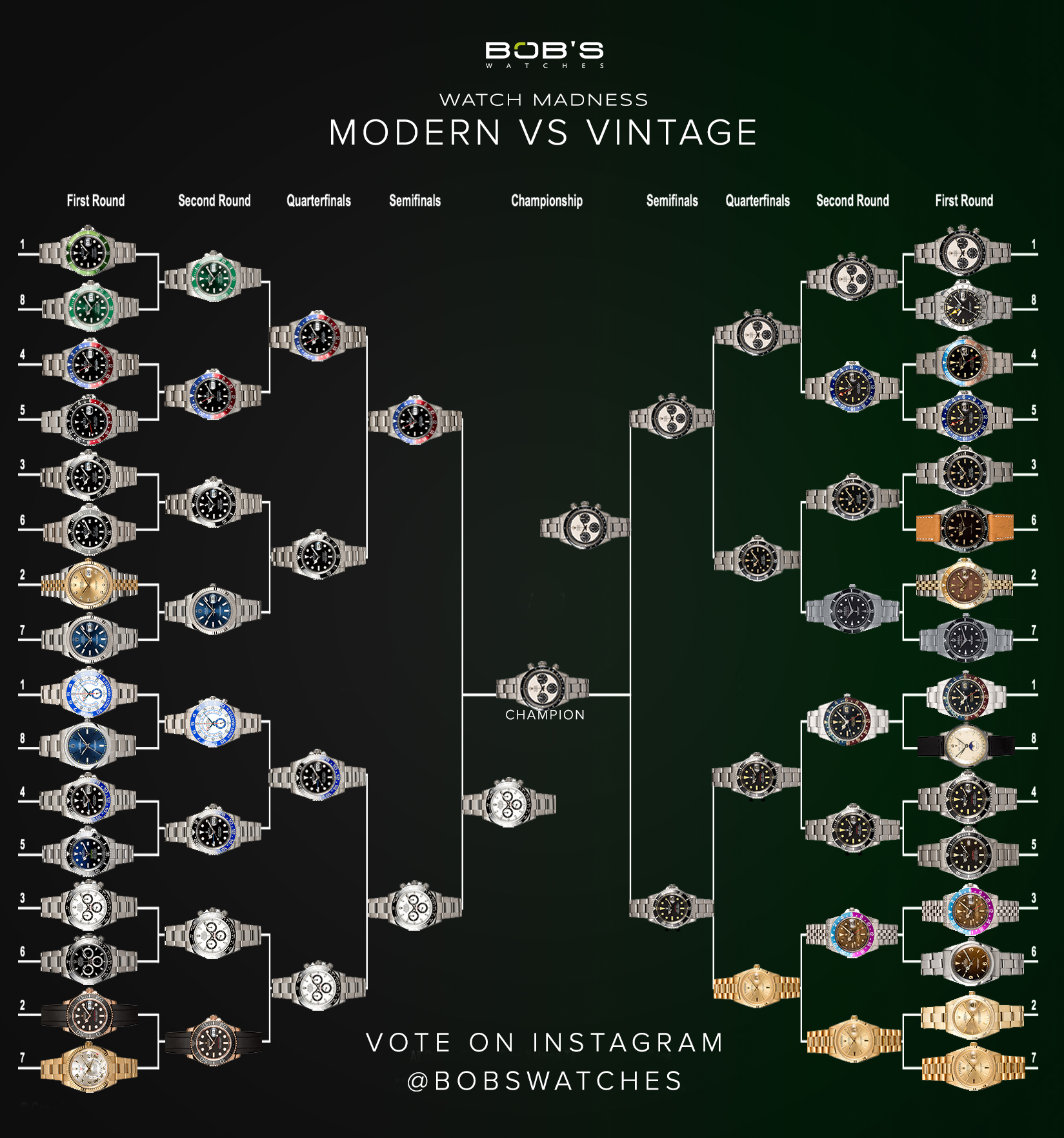 With 32 watches on the bracket, be sure to submit your vote on our Instagram Story @bobswatches. A printable version of this bracket is provided at the bottom of the page. The Paul Newman won. Details at the bottom.

Our first polling will happen on Tuesday, March 13th.

Without further ado, here are the 32 fantastic Rolex watch contenders:

Which Rolex watches do you think will make it to the Sweet Sixteen, Elite Eight, and Final Four? And which reference will come out on top to win the Watch Madness tournament? It’s up to you to decide!

Follow us on Instagram at @bobswatches to cast your votes in our story. Also, don’t forget to reference this blog page for updated results on the watch competition.

Which Rolex will be crowned the King of the Crown? Will it be the vintage Daytona ref. 6263 Paul Newman? Or perhaps the GMT-Master ref. 1675 Pepsi? Or maybe the new Daytona ref. 116500 Panda?

Pick your favorites, join in on the voting, and we’ll announce the winning watch at the end of the month. May the best Rolex win.

Get the printable version of the bracket here.

On Tuesday, March 13, 2018, there were two matches. Here are the results of the modern and vintage bracket. 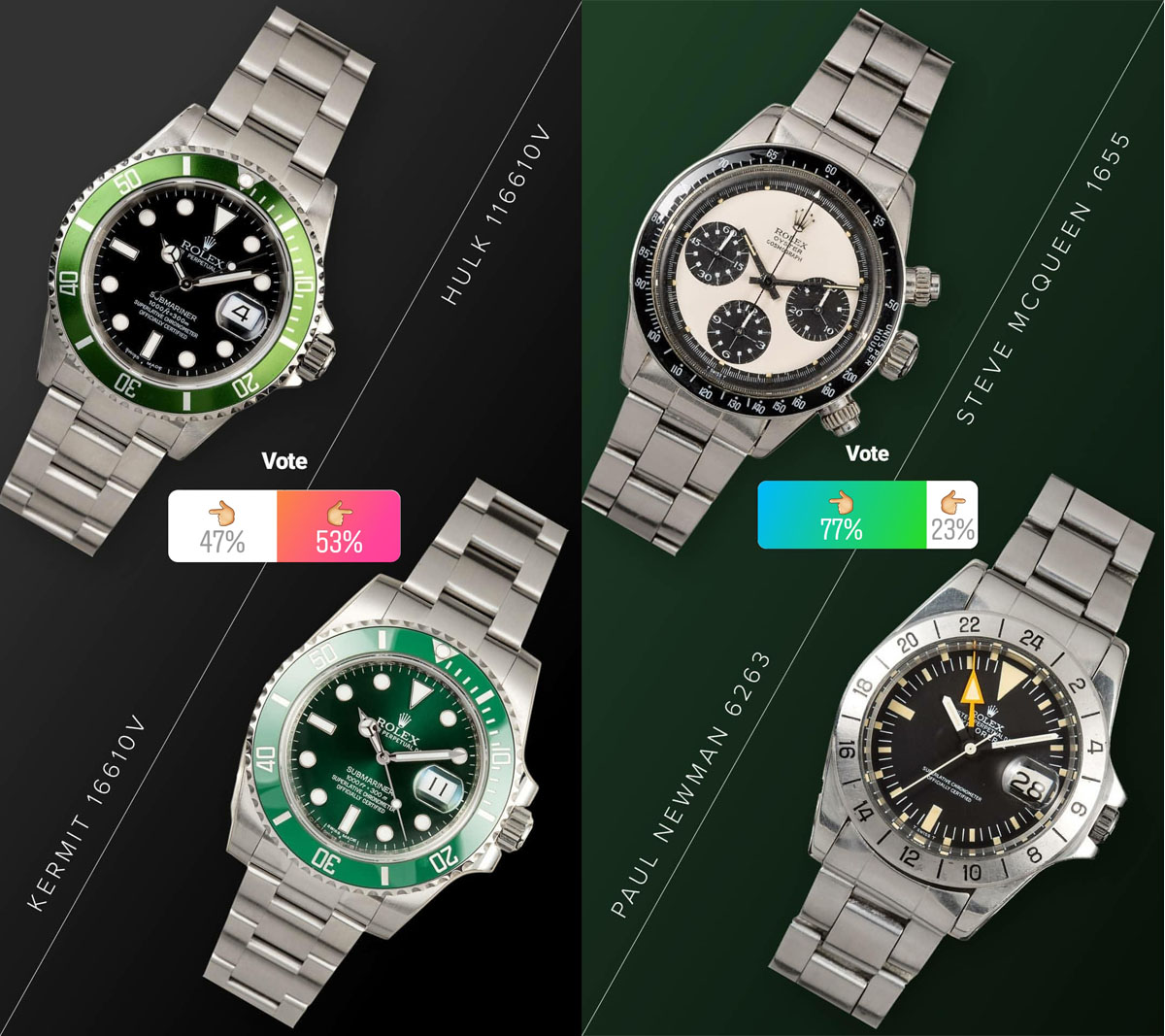 The Kermit vs the Hulk and the Paul Newman vs the Steve McQueen.

On Wednesday, March 14, we had another matchup on the modern and vintage bracket. 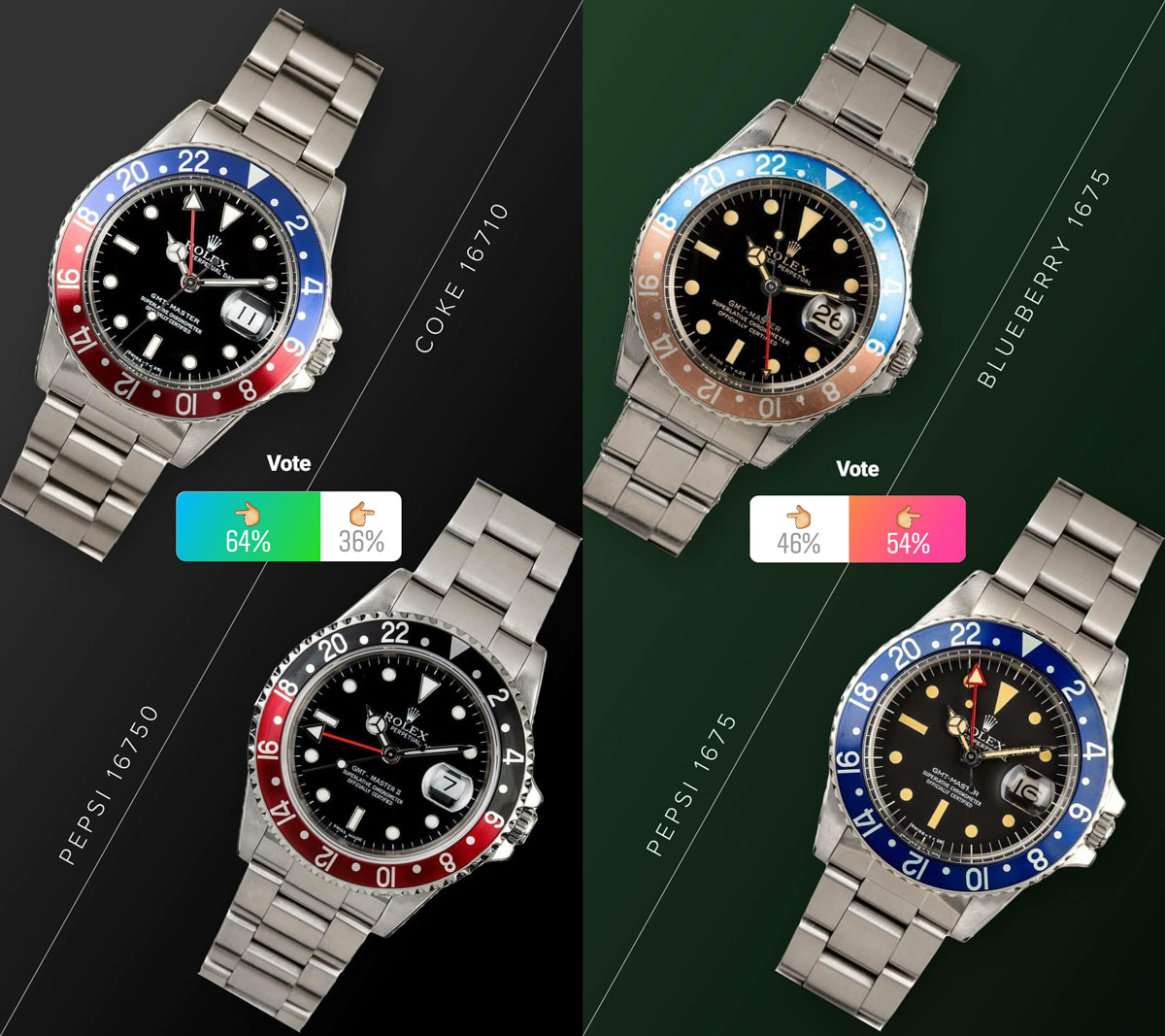 On Thursday, March 15th, we saw a clear pattern with these models. People love the classic Submariner. 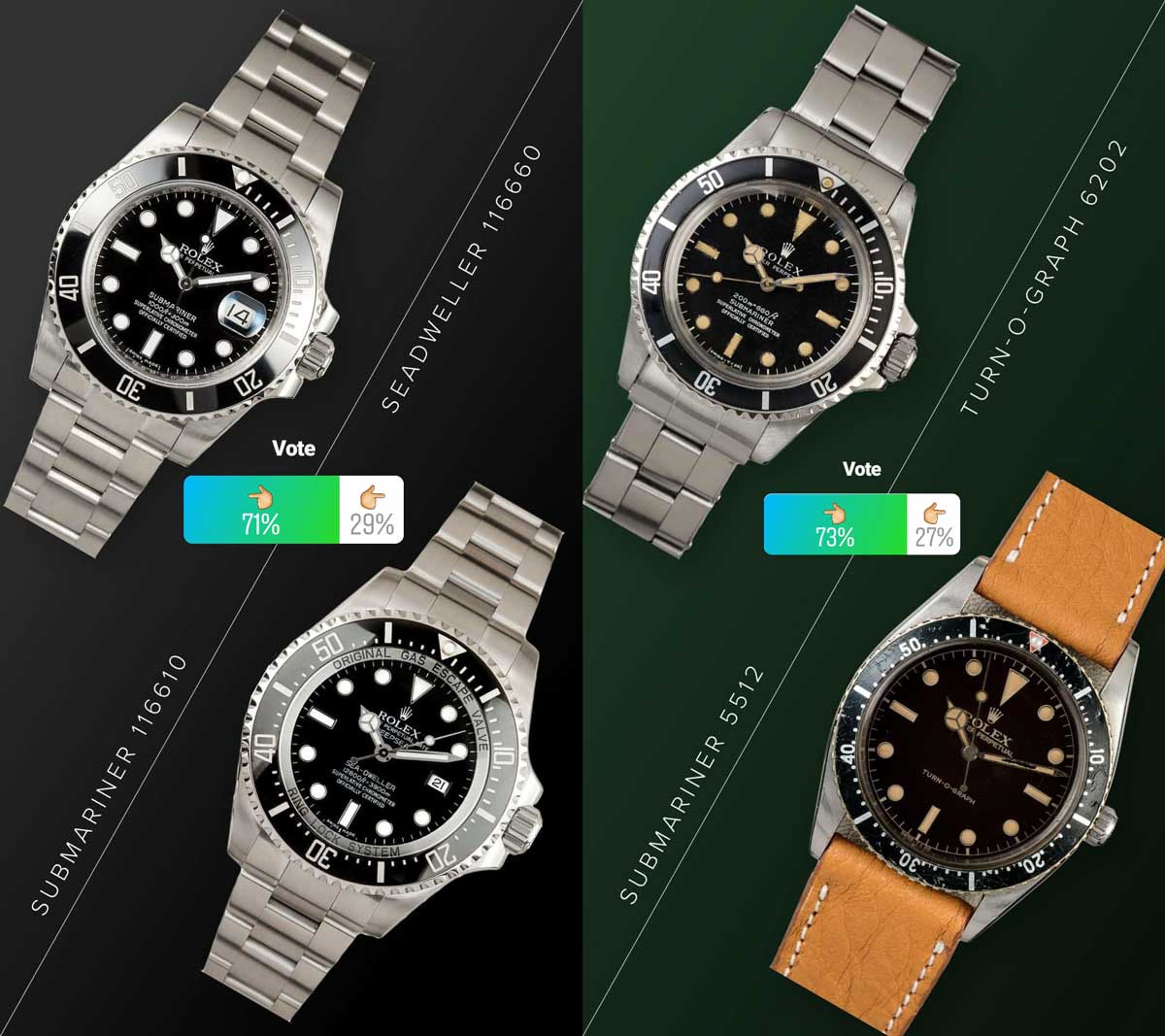 Friday, March 16th we look at the battle of the Datejusts and two vintage watches that people love.

GMT-Master “Root Beer” vs Milgauss 6541: The Root Beer lost with 930 votes while the Milgauss received 1040 votes. 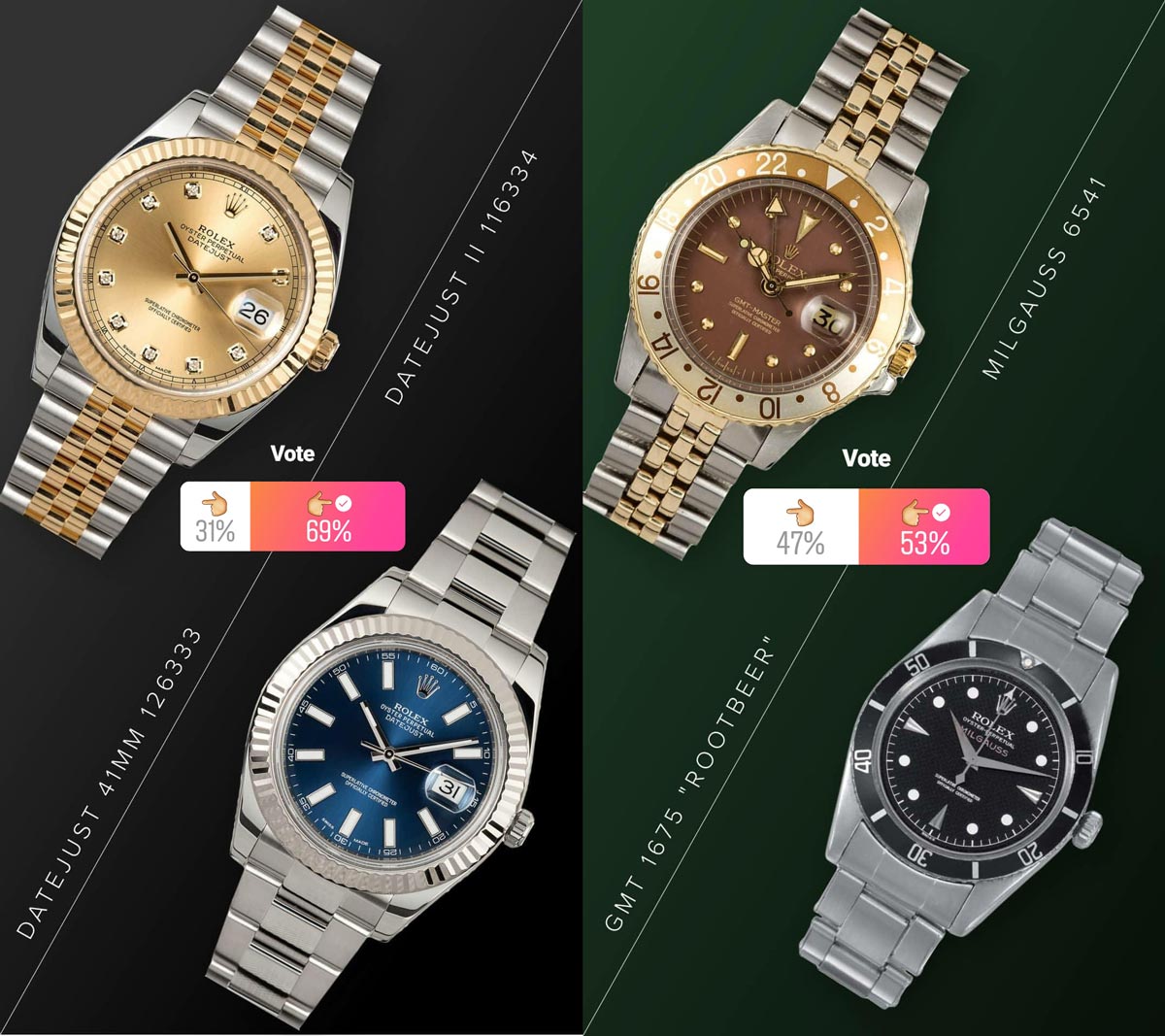 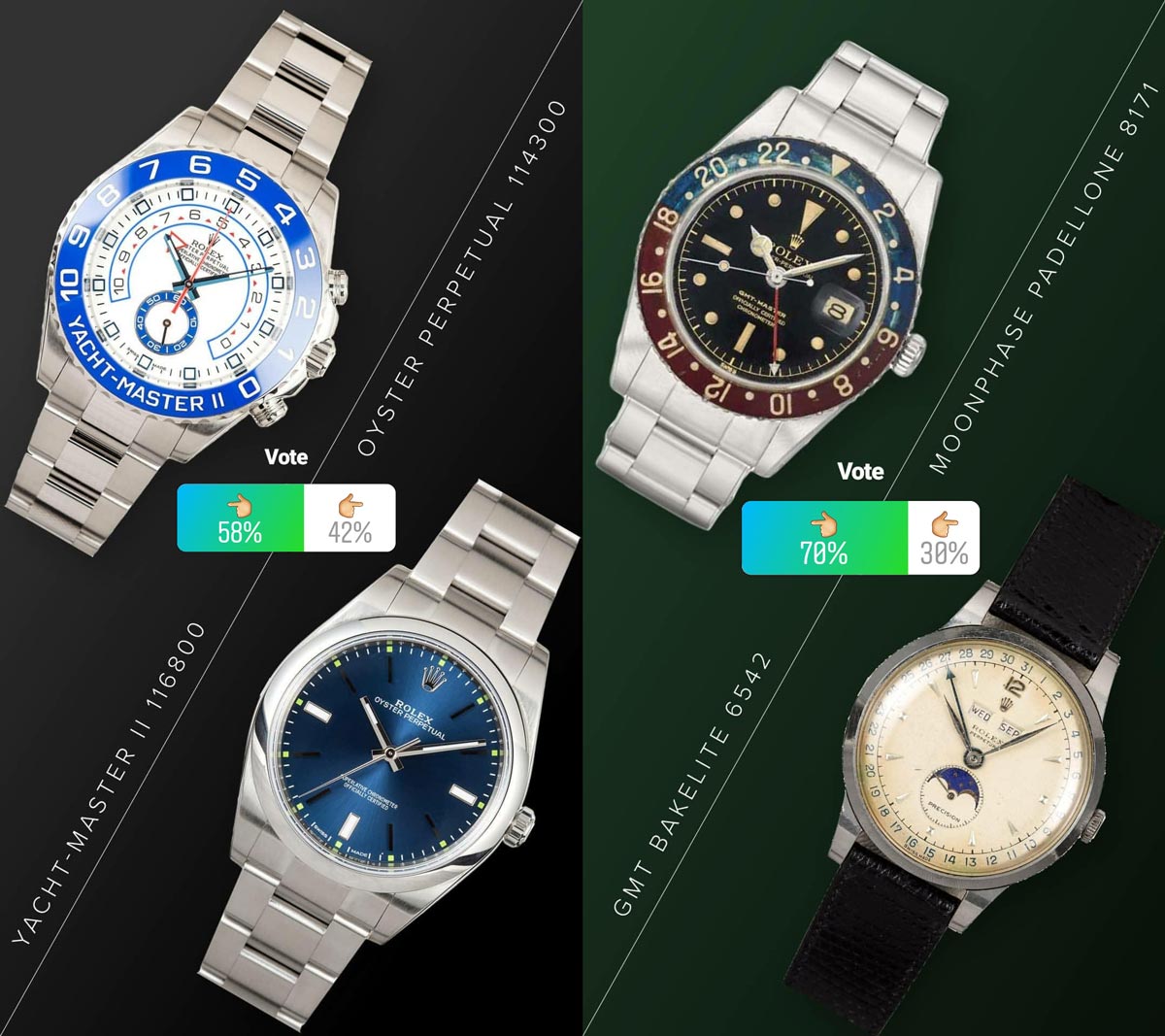 Tuesday, March 20, 2018, was a great matchup. One bracket won by a landslide and the other was nail-bitingly close.

James Cameron vs the Batman: The James Cameron took the loss. It only received 820 votes out of 2466 (33%) while the Batman won with a staggering 1646 votes.

The Red Submariner vs the Double Red Sea-Dweller: This was our closest matchup yet. Out of 1740 votes, the Red Sub took the win with 950 votes to 913. Our closest yet. 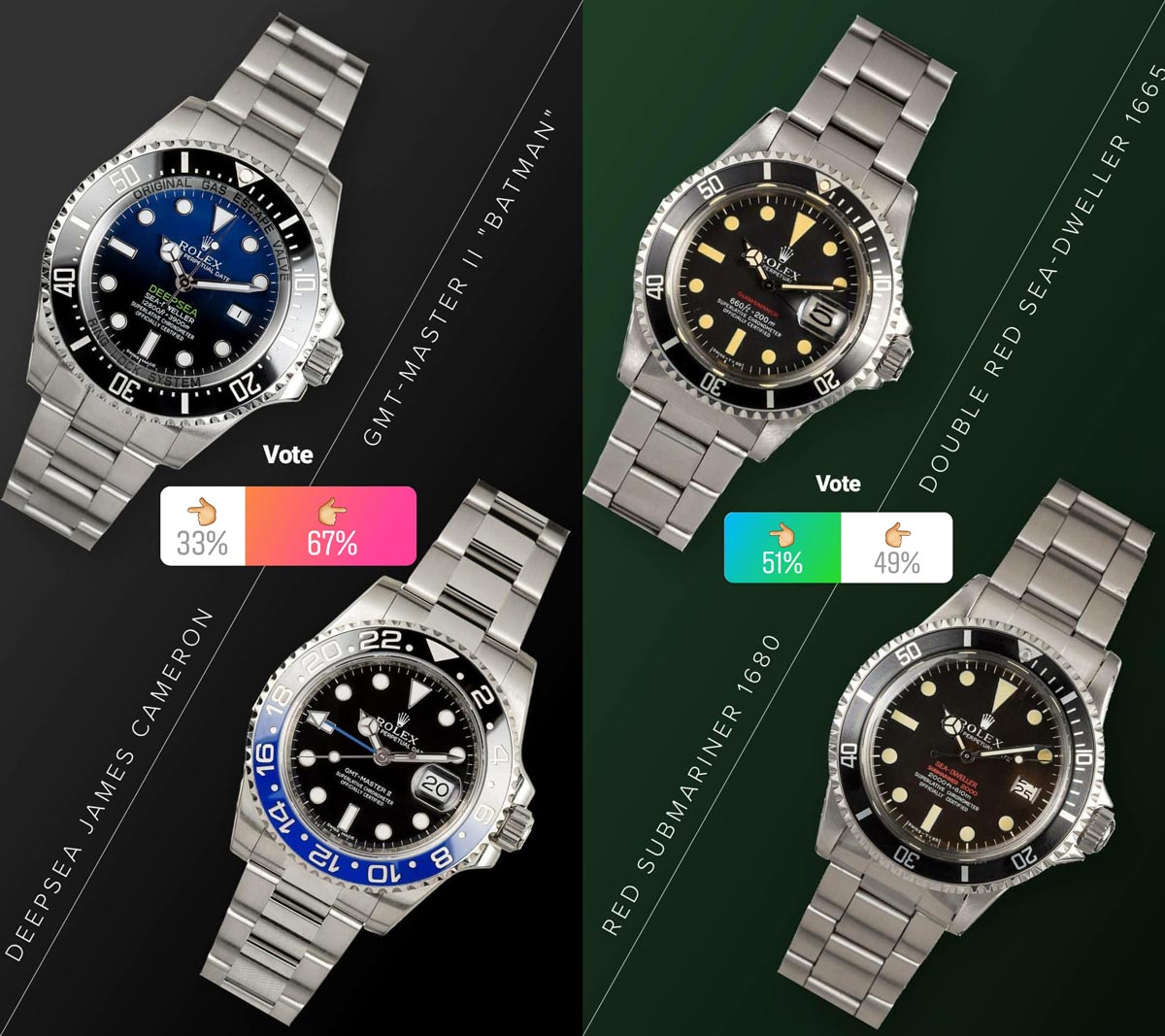 Wednesday, March 21, 2018, was a battle of a pair of Daytonas and tropical watches. 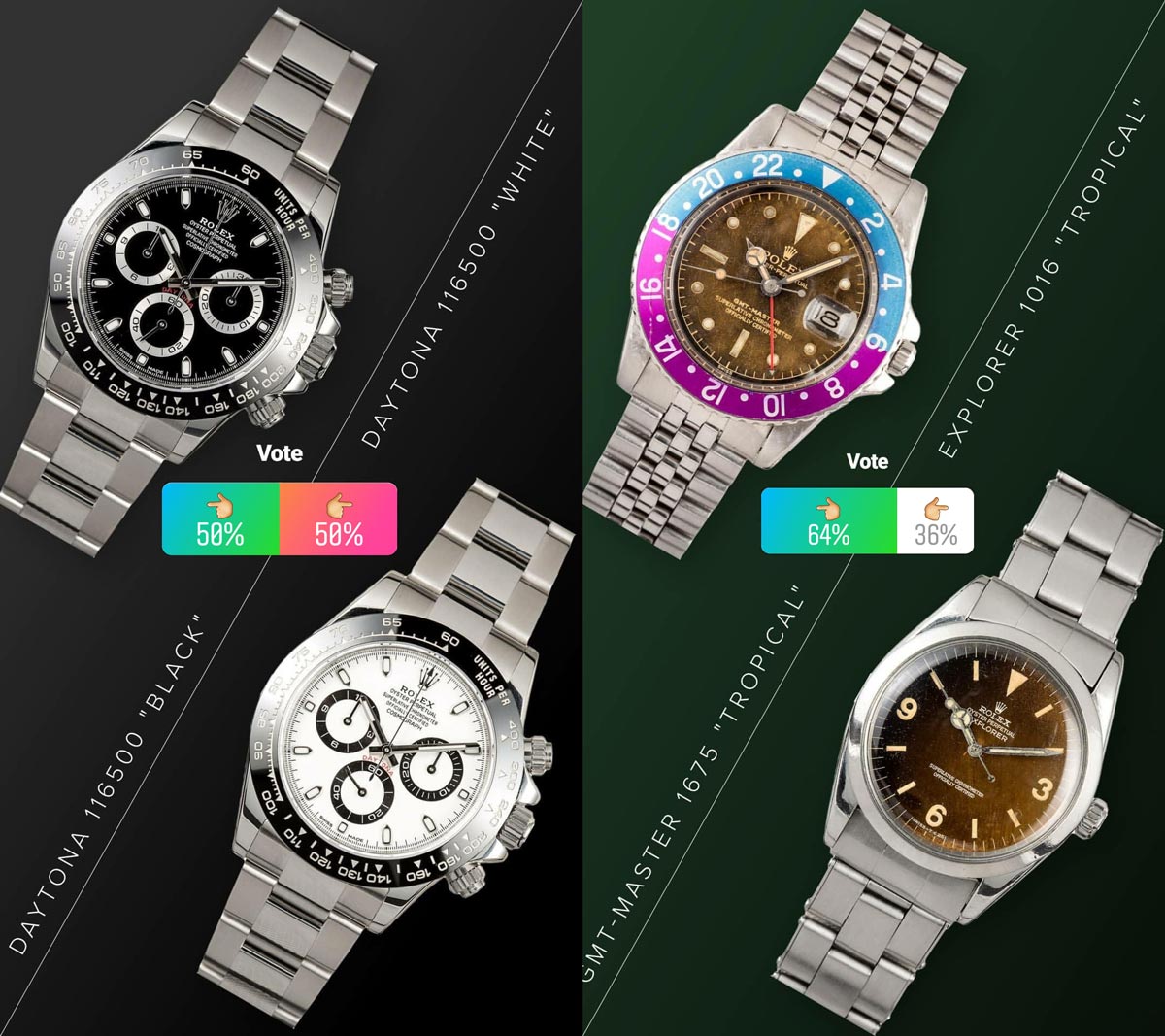 Thursday, March 22, 2018, we got to see the dress watches and two of the newest models face off. 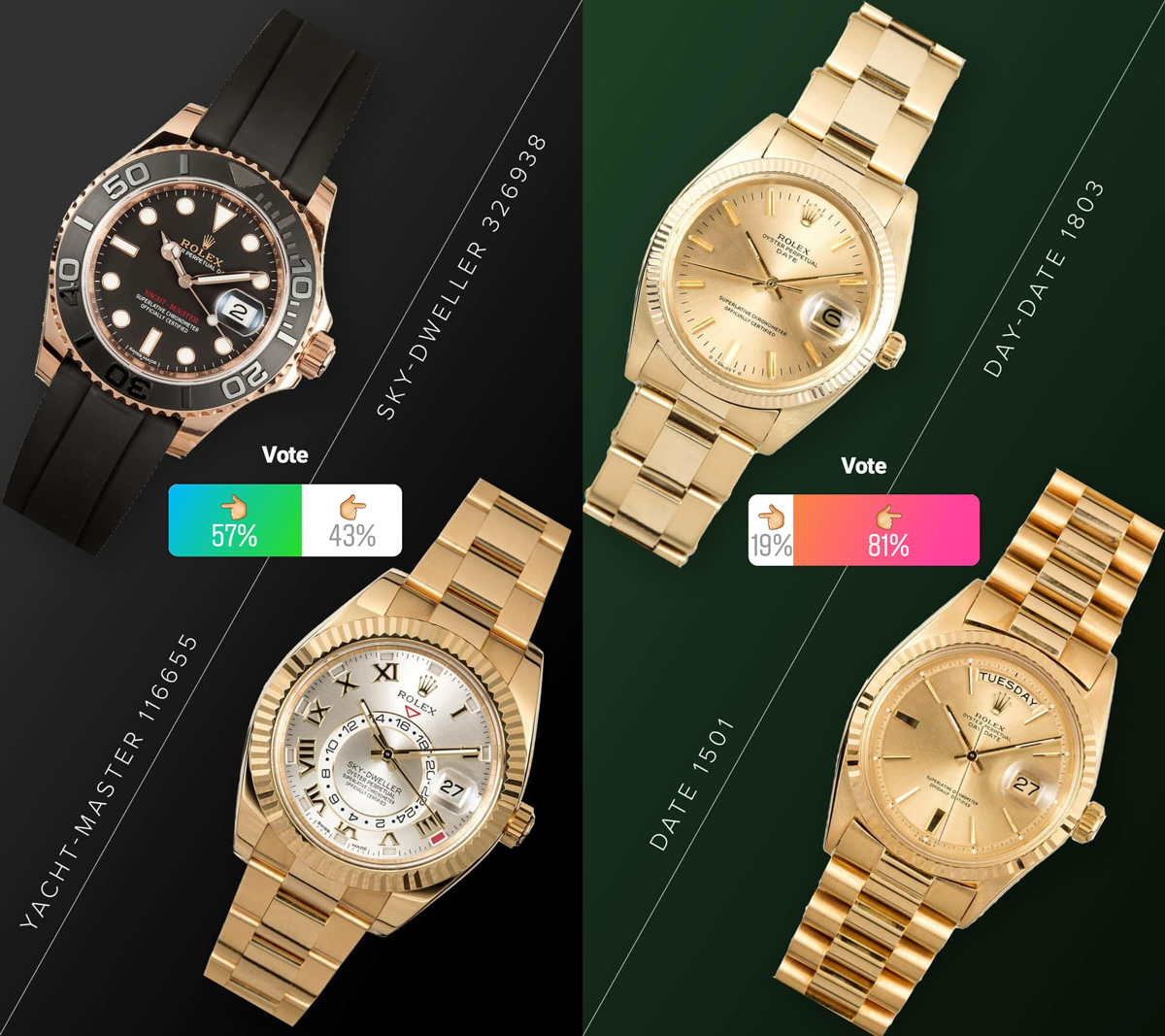 With only a single fight this Friday on March 23, 2018, there was a clear winner. 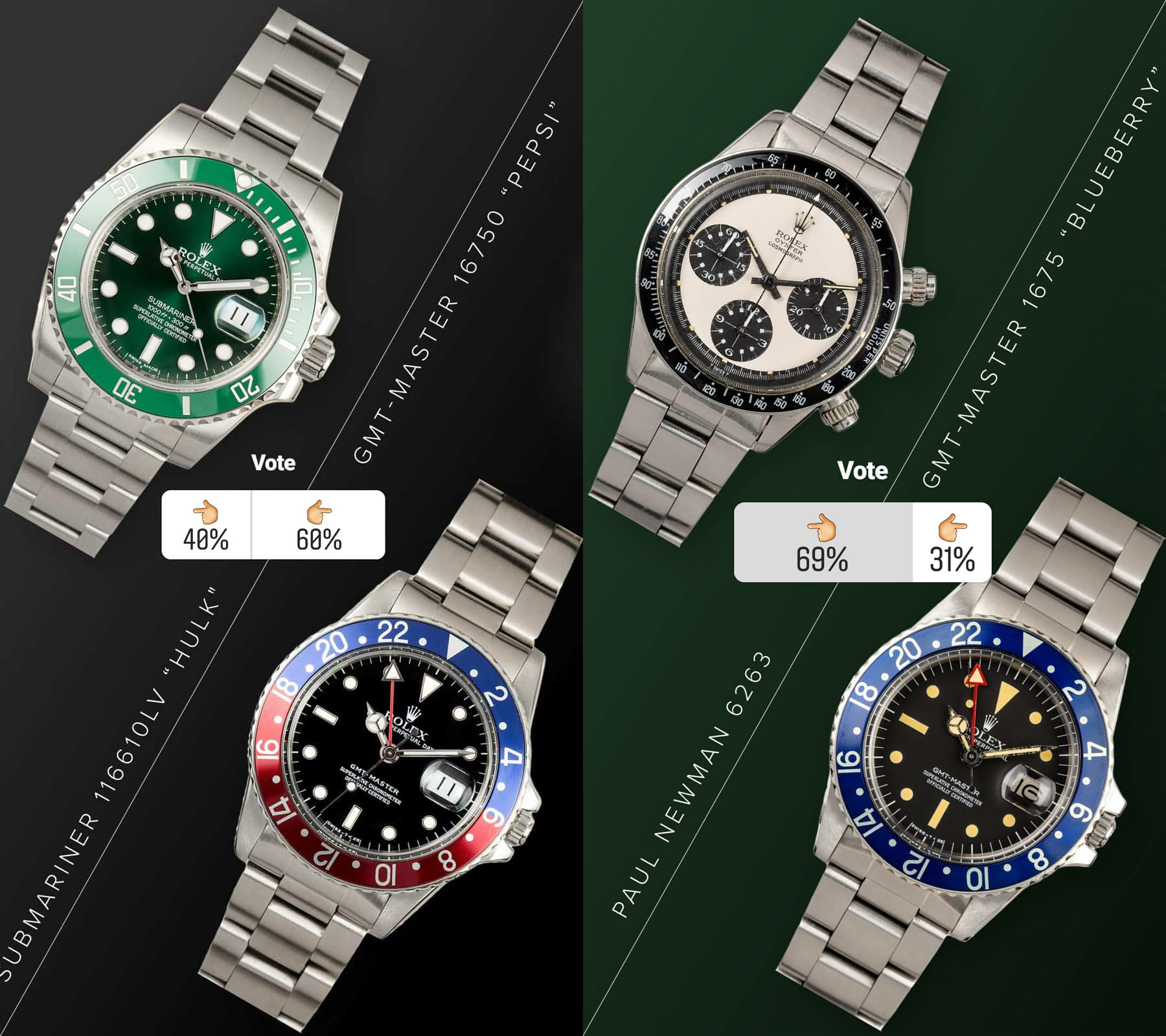 The Pepsi and the Paul Newman were the winners of the poll.

After our quick pause with Baselworld coverage, we return to Watch Madness. 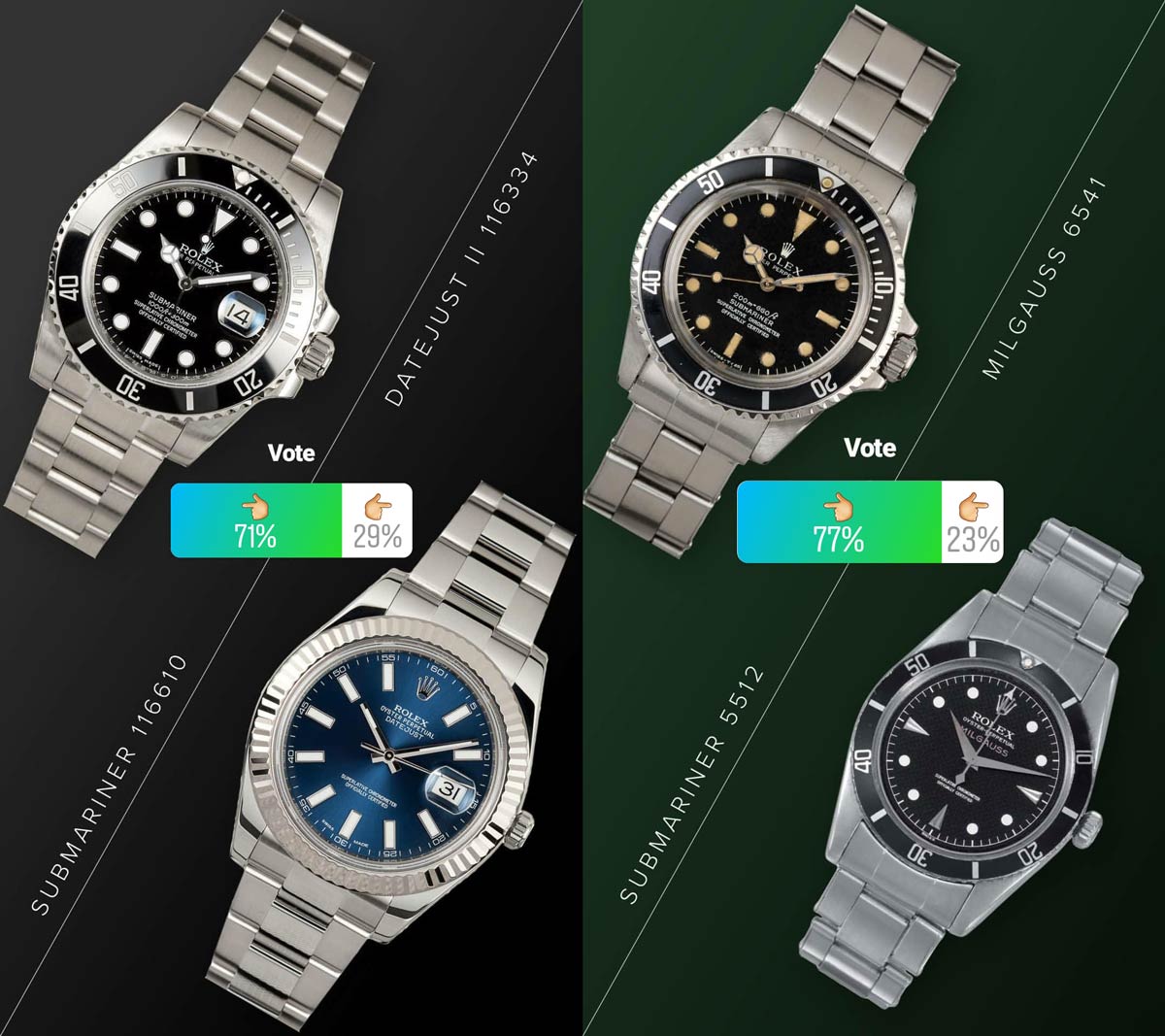 We had a back to back matchup yesterday with two stunning matchups.

The Red Submariner 1680 vs GMT-Master “Bakelite”: While both of these watches are iconic, the Red Sub walks away with the W getting 1395 while the GMT received 1316 votes. 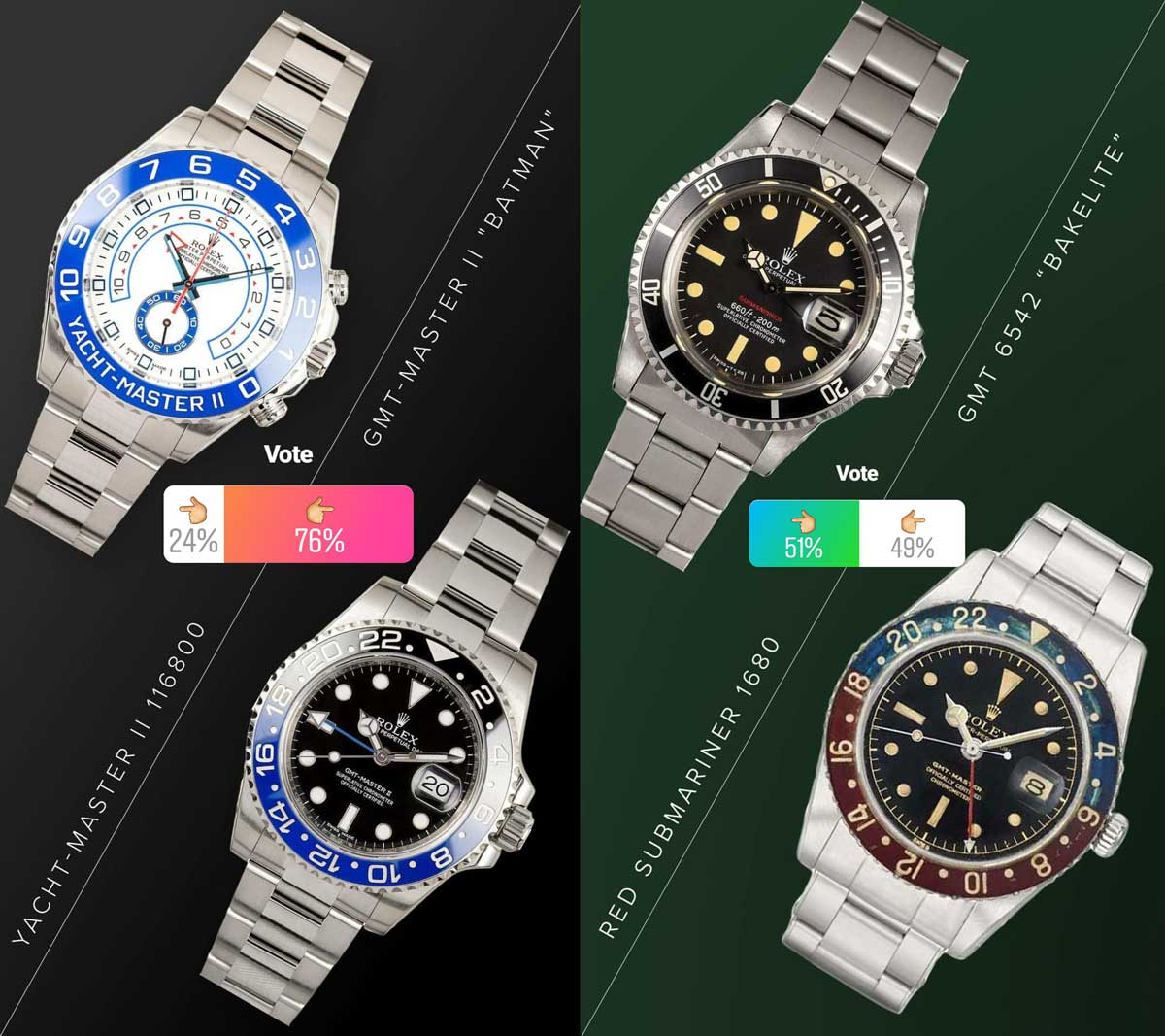 The Batman won with 76% votes and the Red Submariner won by just a hair at 51%.

Another Watch Madness line up: 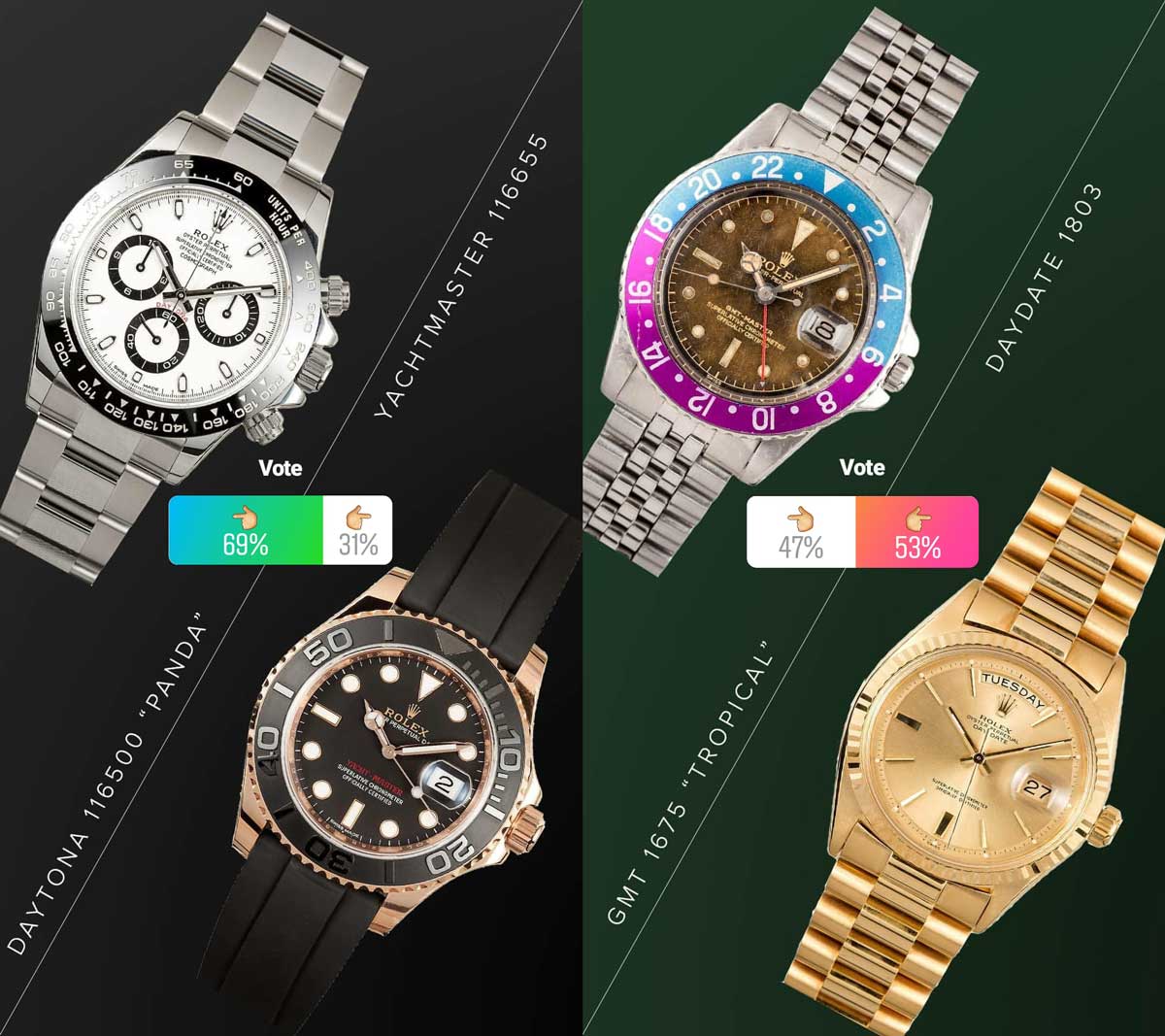 The Ceramic Daytona was expected to win, and the Day-Date took us by surprise.

The results are in with our Elite Eight!

The Vintage Submariner 5512 vs Daytona “Paul Newman”: The Paul Newman easily took this round taking home 2003 votes while the vintage Sub only received 883. 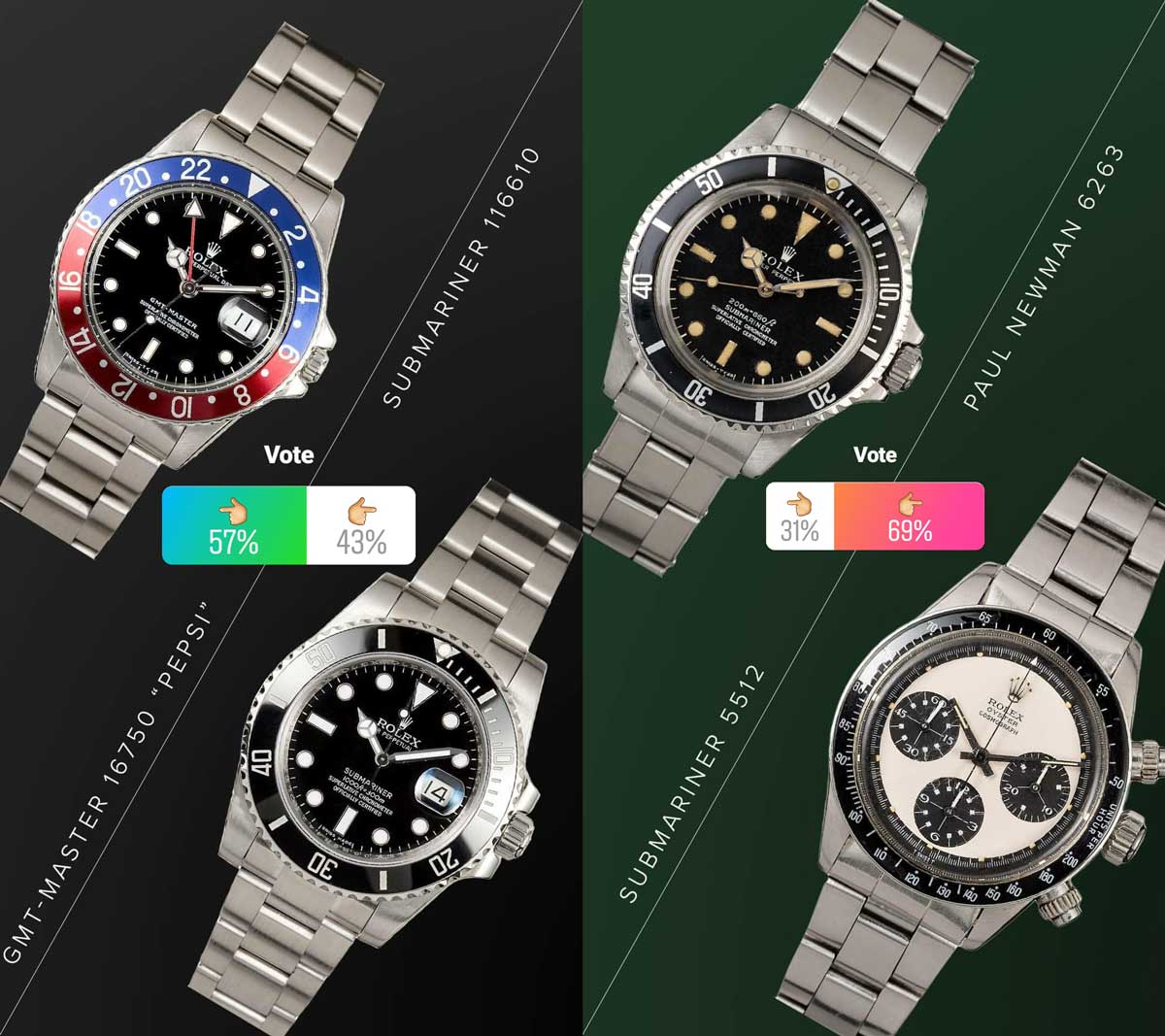 On the same day, we had another match up. 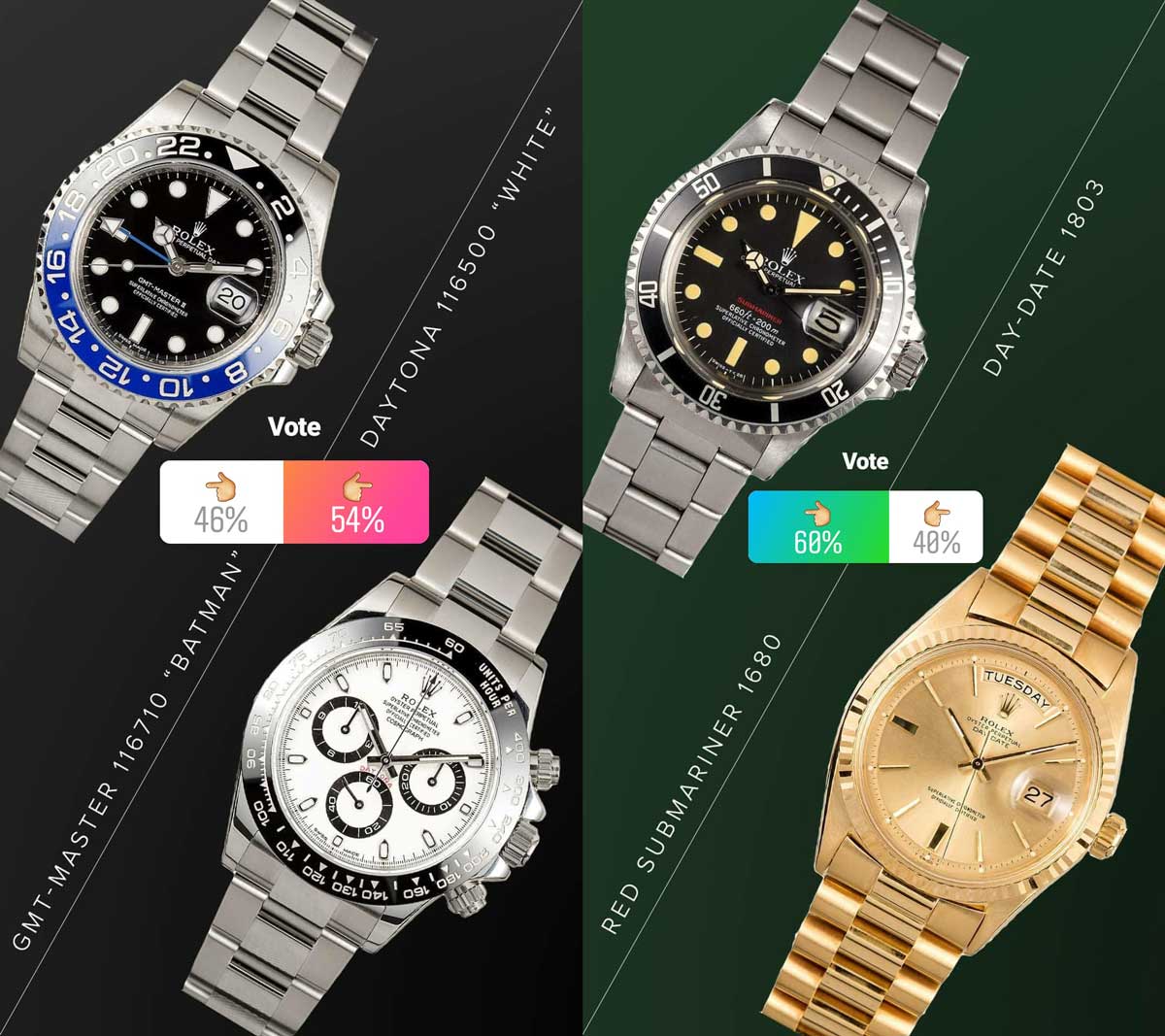 Last Friday, we paired up our final four! We are very excited to see the results of the championship game. 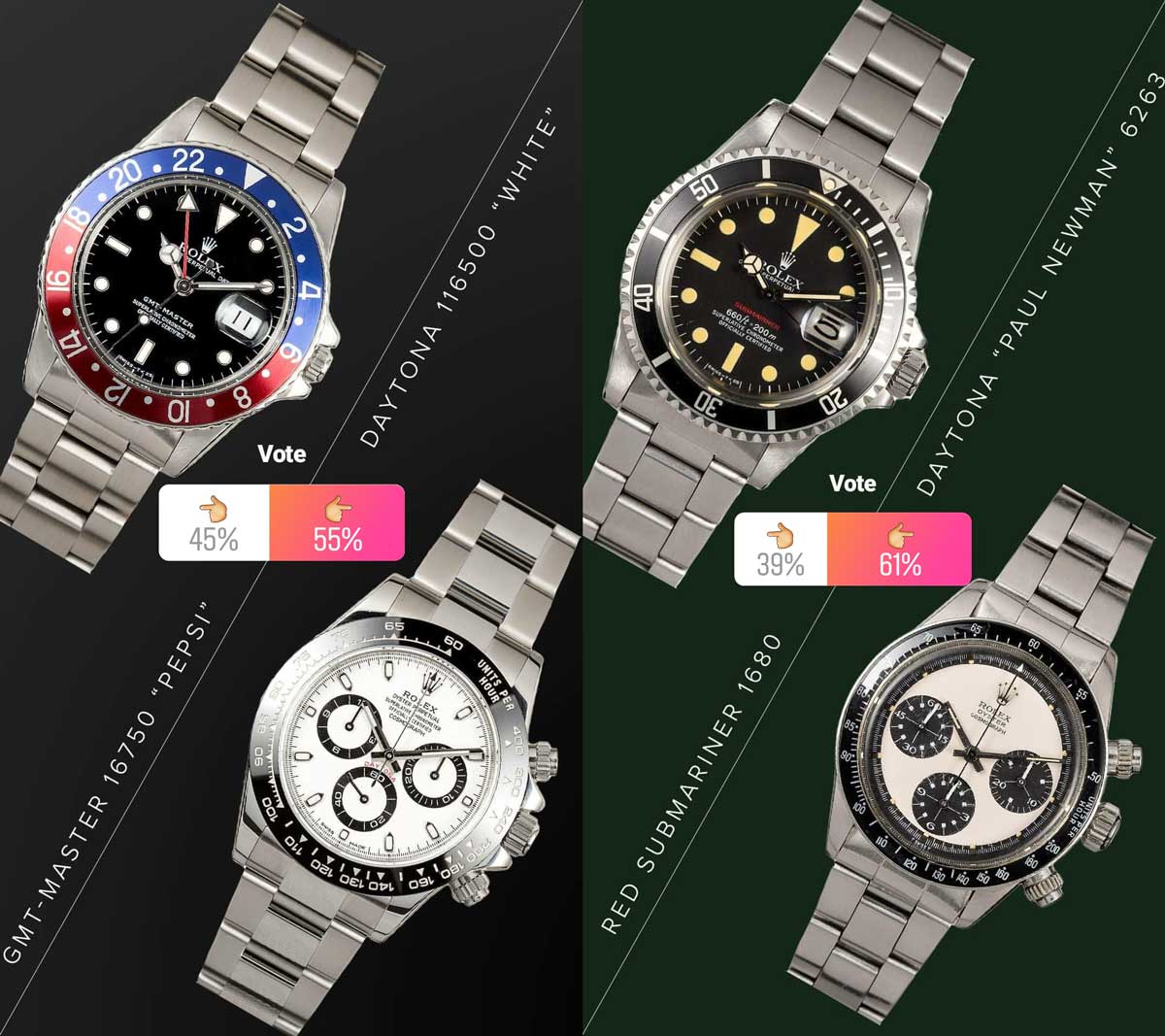 The Ceramic Daytona and the Paul Newman will be the finalists on Monday, April 9th, 2018. 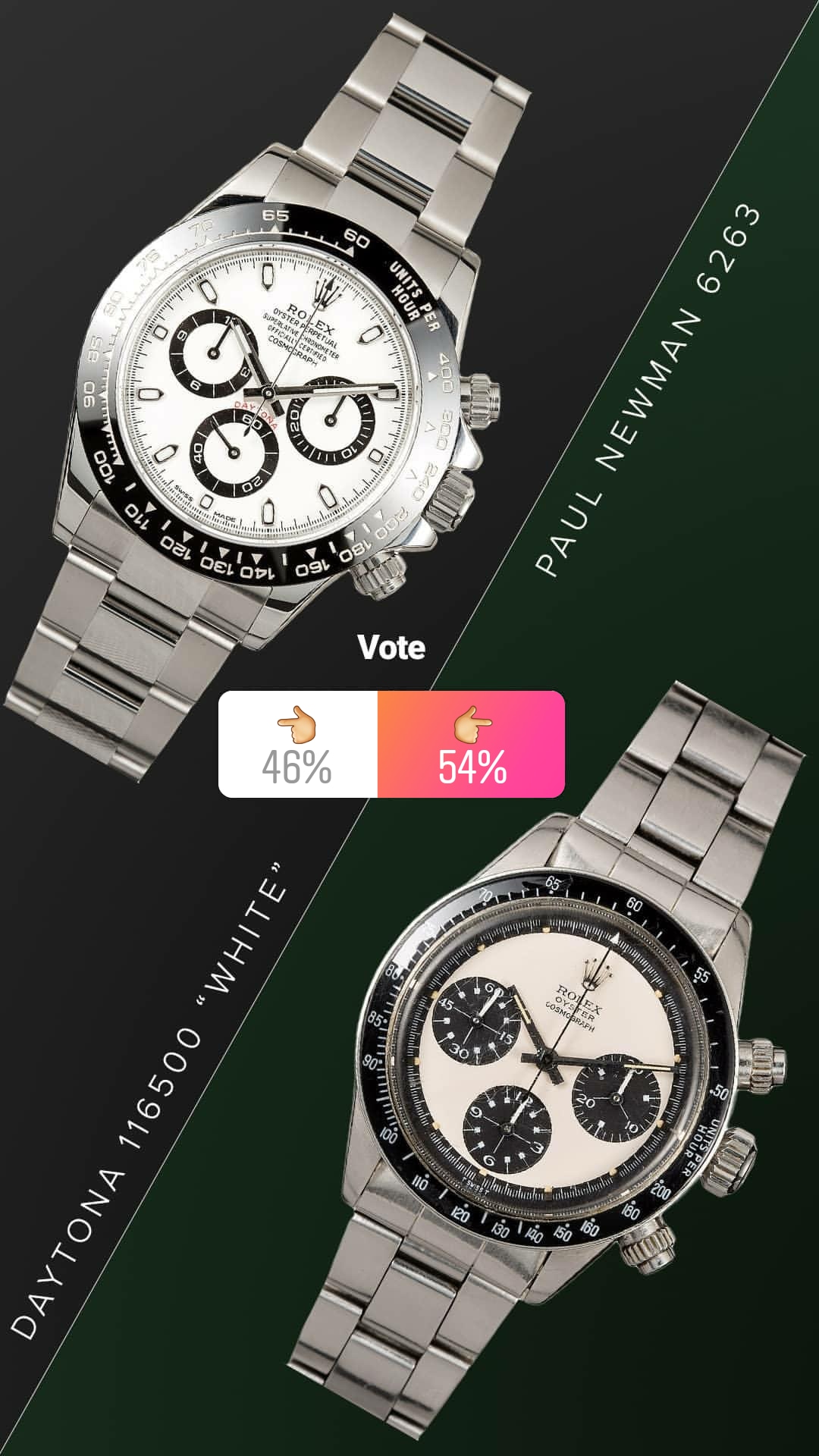 Thank you to everyone who participated in our Watch Madness bracket! In total, we’ve received more than 77,000 votes.