It was a simple word from Phil Mickelson, but one that perfectly conveyed his feelings.

As Englishmen Justin Rose was claiming his first big victory, Phil was trying to describe how it feels to come second for the sixth time. 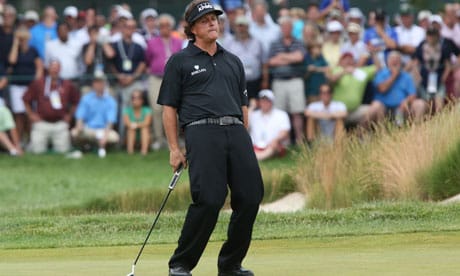 “This is tough to swallow after coming so close. This was my best chance of them all because I was playing well. I had a golf course that I really liked, that I could play aggressively on a number of holes, and it felt like this was as good an opportunity to ask for – and to not do it, it hurts.”

Despite having the best shot of the day, Mickelson tied with Jason Day for second, finishing three over par. Justin Rose finished just two strokes ahead.

“It’s never easy, final round of the US Open and you’ve got guys in front of you kind of dictating what you have to do. When I made that eagle on 10 it allowed me to relax a little bit because it moved me back to even par for the tournament, which is a score you gotta figure is gonna be right around where the winning score is. I felt like I was patient throughout the day.”

Mickelson’s US Open record speaks for itself. He’s played a total of 23 Opens, and came second in 1999, 2002, 2004, 2006 and 2009: a record that means he achieves second place once every four attempts. Not bad: but it seems the main prize is proving slightly more elusive. Despite such a lose, Phil Mickelson’s tough mentality will surely bear some fruit at his next event.

It’s a barrier Mickelson will have to overcome to join Rolex’s champions. The luxury watch-maker has been right behind some of golf’s best players as they battled the fairways, roughs, bunkers and greens.