By this point, you already know the drill – Episode 5 of our Watch in the Box video series is out now!

Each week, countless packages get shipped to our Newport Beach headquarters from all around the globe, and inside each one is a different luxury watch. Join us for Episode 5 of our Watch in the Box video series, where we pull aside one of the random incoming boxes and open it up on camera, so that you can join in for the big reveal. 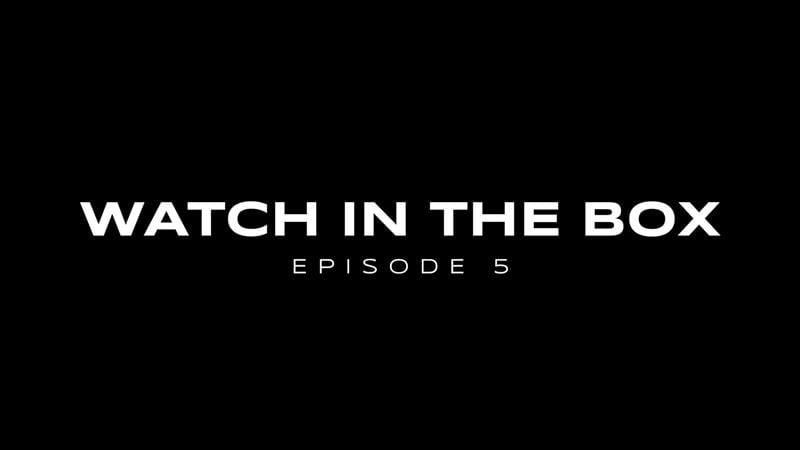 Watch in the Box: Episode 5

If you are not already familiar with our Watch in the Box video series, be sure to visit our YouTube page, where you can watch all of the previous episodes and get caught up before watching the latest installment below. Additionally, please be sure like our videos and subscribe to our YouTube channel, so that you can stay up-to-date on all of the latest Watch In the Box episodes and other new video content.

Here at Bob’s Watches, we receive thousands of pre-owned watches from all over the world. From vintage to new-model watches, we never know what exactly will be in each box. Join us for Episode 5 of our series as we discover…what’s in the box?

In this installment of our Watch in the Box video series, we unbox a 6-digit anniversary Rolex GMT-Master II ref. 116710 with a ceramic bezel insert. The ref. 116710 is the first instance of a ceramic “Cerachrom” bezel on a stainless steel Rolex watch, making it a highly coveted timepiece among many Rolex collectors. While the ref. 116710 isn’t an official anniversary Rolex, it was released about 50 years after the original GMT Master hit the market in the 1950s and features small flourishes of green on its dial and 24-hour hand, earning it the nickname the “Anniversary GMT” in the watch community.

The GMT Master was developed during the dawn of transatlantic flight, just as the Pan American Company began to offer flights from New York to Paris. The airline turned to Rolex to develop a reliable, dual-time watch for their pilots to use to track multiple time zones, and the brand’s iconic pilot’s watch was born.

The original model was equipped with a 24-hour bezel and a dedicated 24-hour hand on the dial. The idea was that the wearer could track local time on the bezel while keeping home time on the dial. In the 1980s, Rolex released the GMT Master II, which received a new movement with an independently adjustable local hour hand. This upgrade meant that the hour hand could now be set without disturbing the home time, allowing the wearer to read a second-time zone on the dial and a third by rotating the bezel.

The GMT Master II has seen numerous upgrades over the past several decades, with the ref. 116710 is among the most notable. The case maintains a traditional 40mm diameter but now features a new design with larger crown guards and wider lugs, earning it the nickname “Super Case” among collectors.

The redesigned case also received an anti-reflective Cyclops lens on its sapphire crystal over the date, a new bezel that operates on 24 clicks instead of 120, an engraved inner bezel, and a next-generation chronometer-certified Caliber 3186 movement. The ref. 116710 also wears on a newer bracelet with polished center links and a completely redesigned Oysterlock safety clasp.
The example that we have here today displays the time on an upgraded “Maxi” dial, which features larger hour markers and wider hands filled with long-lasting Superluminova plots. The dial is paired with an all-black ceramic bezel insert with contrasting 24-hour graduations finished in platinum PVD. Additionally, the ref. 116710 was the last GMT Master II produced with an all-black ceramic bezel. Newer references offered by Rolex feature a bi-colored, black and blue “Batman” or red and blue “Pepsi” variant, making this now-discontinued example a popular choice among collectors who seek a sharp, versatile sports watch.

A Rolex GMT Master II Ref 116710 in excellent condition can command a price of around $11k on the pre-owned market.

Previous Article The Top 3 Things to Look for When Buying a Rolex as an Investment
Next Article Should You Ever Customize Your Rolex?