One of the biggest, and most welcome, surprises of this year’s Baselworld is the arrival of Tudor’s first GMT watch. Adding to the already comprehensive Black Bay series, the Rolex subsidiary’s introduction into the world of the dual time zone pays a very respectful homage to the model that started it all. Let’s explore the Tudor watches available to the public.

While the parent company might have shown up at the door with three new versions of the Rolex GMT-Master II, including the much-anticipated return of a steel Pepsi example, it’s Tudor’s vintage throwback styling that is stealing many of the headlines. 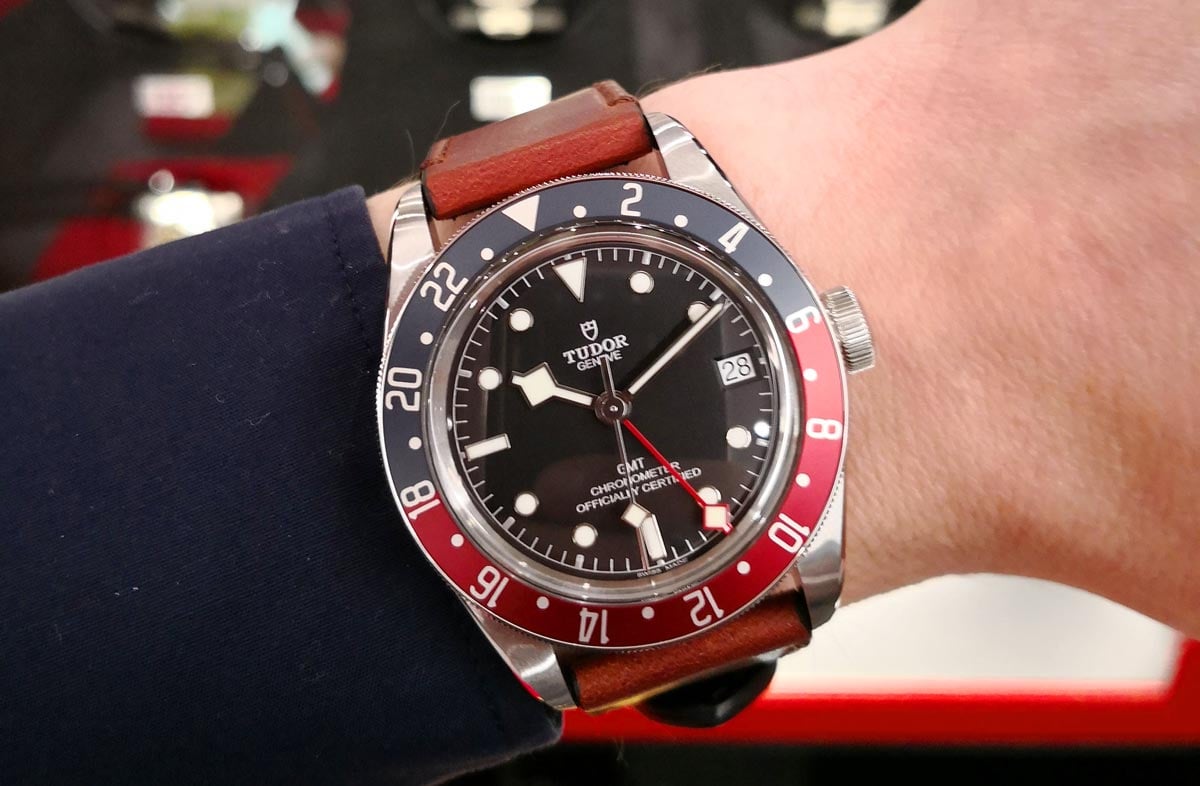 The Tudor Black Bay GMT made a lot of people talk.

Through some engineering skullduggery, the GMT manages to keep the same 41mm dimensions as the majority of the Black Bay range, even with the additional complication. That brings it in as a little bigger, and a couple of mils thicker, than the GMT-Master II—not at all a bad thing, but something you will definitely notice on the wrist. You can possibly consider this the “Fat Lady” of Tudor. In keeping with most of Tudor’s output, and only adding to the real retro vibe, the case does without guards for its oversize crown.

The dial too, with its matte finish and gilt printing, is a beautiful period detail, and the hands retain Tudor’s well-established snowflake motif. The theme also carries over on to the extra long, red GMT hand, overlapping the dial’s chapter ring.

But it is the bezel, of course, that has delighted most of the visitors to Baselworld 2018. Clearly, a Pepsi color scheme, although you won’t find the word in any of the official literature, the rotating two-tone surround hasn’t tried to compete with the glistening Cerachrom of the Rolex, but has instead kept to a more subdued, toned-down aesthetic. Described as blue and burgundy rather than red, the aluminum insert changes shades in differing light, in a way ceramic doesn’t. 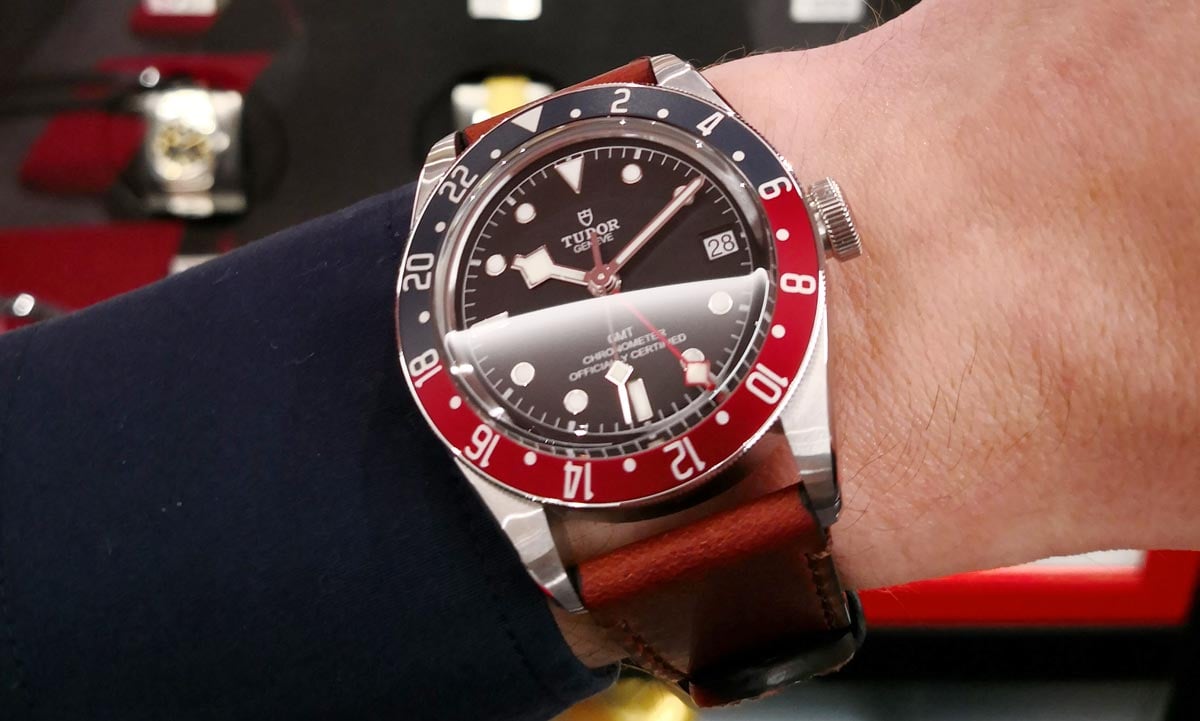 The Tudor Black Bay GMT on the wrist is a beautiful watch with indicators pointing to its inspiration.

Until very recently, one of the main differences between Tudor and Rolex, and the biggest reason for their fairly significant price gulfs was the use of in-house movements. Rolex have been producing their own calibers for decades, but it wasn’t until 2015 that Tudor stopped buying in purpose-built mechanisms from ETA for their models and became, at least somewhat, self-sufficient.

The Tudor manufacture Cal. MT5652 inside the Black Bay GMT is a COSC certified automatic movement, with a 28,800bph frequency and hugely impressive 70-hour power reserve. Making it a true ‘travel time’ watch, the two hour hands can be set independently, using the module taken from Rolex’s own Cal. 3185, the previous generation movement from the GMT-Master II. It also manages to pack in a hacking feature and a date function, which is set via the ‘jumping’ 12-hour hand. It is a major step up for the brand, even utilizing a silicon balance spring—it is not, however, one of Rolex’s patented Syloxi components. 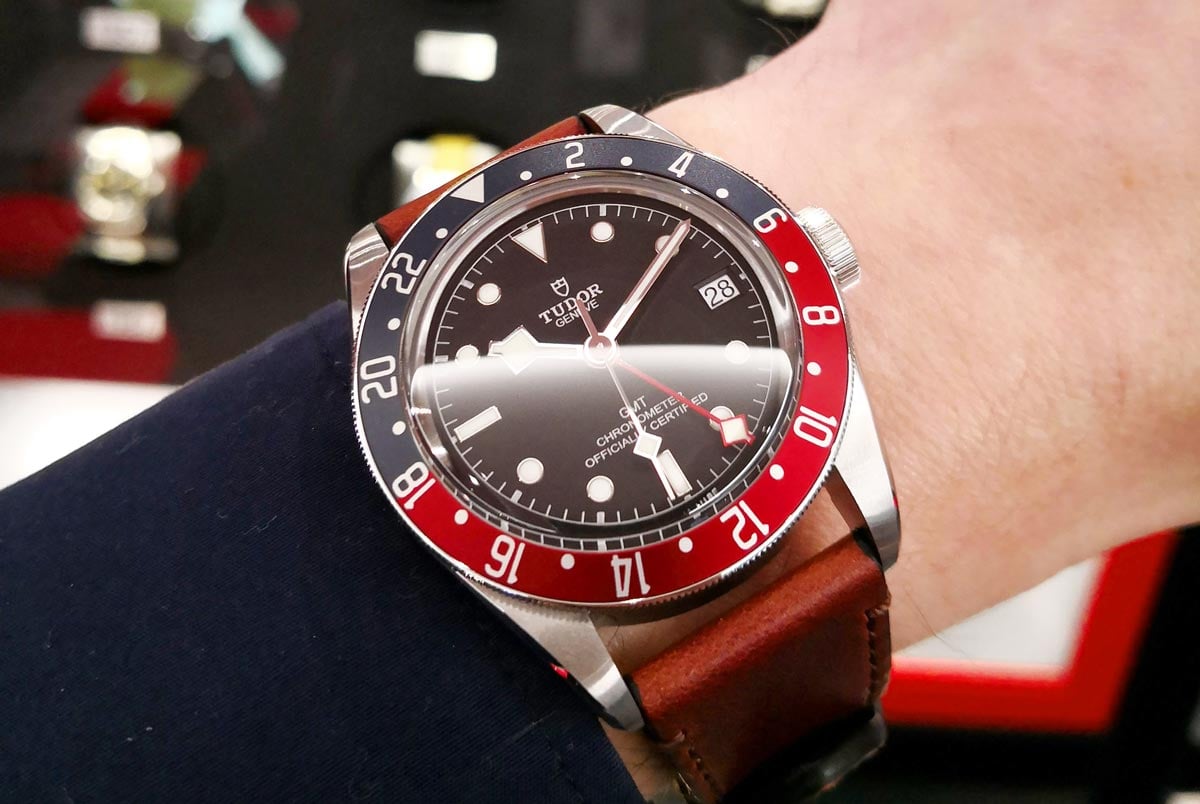 What are your thoughts on the Tudor Black Bay GMT? Comment Below.

The Tudor Black Bay GMT is available on a choice of three bracelets. There is ‘Terra di Siena’ brown leather strap with a folding clasp, a black fabric strap with a burgundy stripe, and a polished and satin, three-link, riveted steel bracelet. Interestingly, the more rough and ready nature of the watch tends to lend itself better to the pair of non-metal bands rather than the sportiness of the Oyster-esque example.

2018 has been very much the year of the GMT at Baselworld, and few would argue that it was high time Tudor threw its hat into the ring. What they have come up with is a perfect tribute to some of the most grail-like references from the past, updated with cutting-edge technology—and it is a blend that is sure to attract a wide and appreciative audience.

By adopting their own in-house calibers, the gap between Tudor and Rolex is getting narrower, in everything but price. At 3,700 CHF on a steel bracelet, the Black Bay GMT is less than half the cost of the new steel GMT-Master II.

While it may use 316L steel rather than the typical Rolex’s 904L, this robust travel companion represents superb value for money, with a quiet, restrained look that suits any occasion.