Rolex makes very calculated moves, slowly evolving each of its watch collections and always moving forward with its designs. However its sister company, Tudor is the more bold and daring among the two brands, and frequently produces vintage-inspired heritage pieces, or colorful and slightly unconventional designs. For Baselworld 2019, Tudor is looking to a strange and dimly lit corner of its history with the release of the new Black Bay P01. 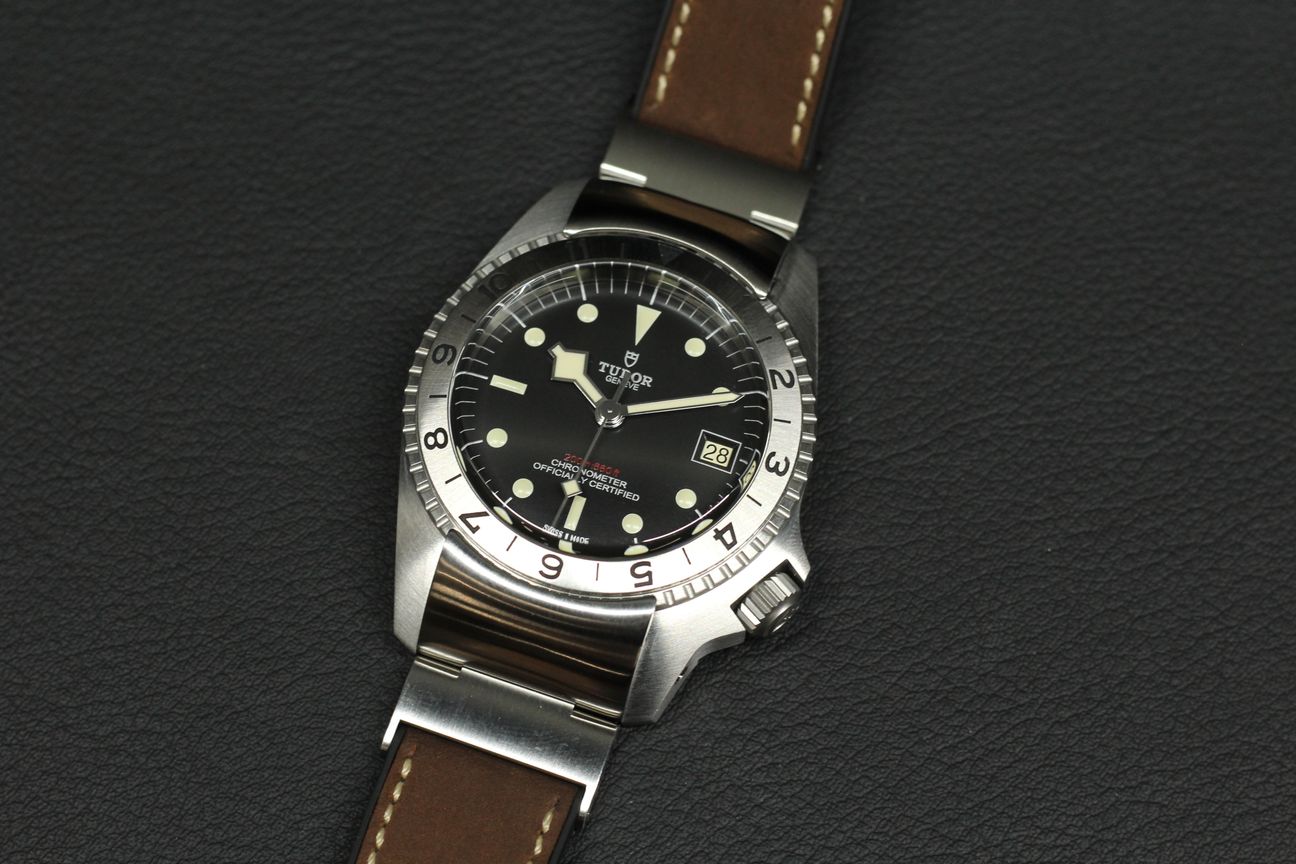 The Tudor Black Bay P01 is inspired by a prototype from the 1960s that was presented to the military.

The watch itself is a significant aesthetic departure from the normal Black Bay case shape. With a 4 o’clock crown and sweeping integrated crown guards, the new Tudor Black Bay P01 looks almost like a modified Seiko SKX007; however the design is actually based on a prototype that was developed during the late 1960s, and presented to the U.S. Navy. 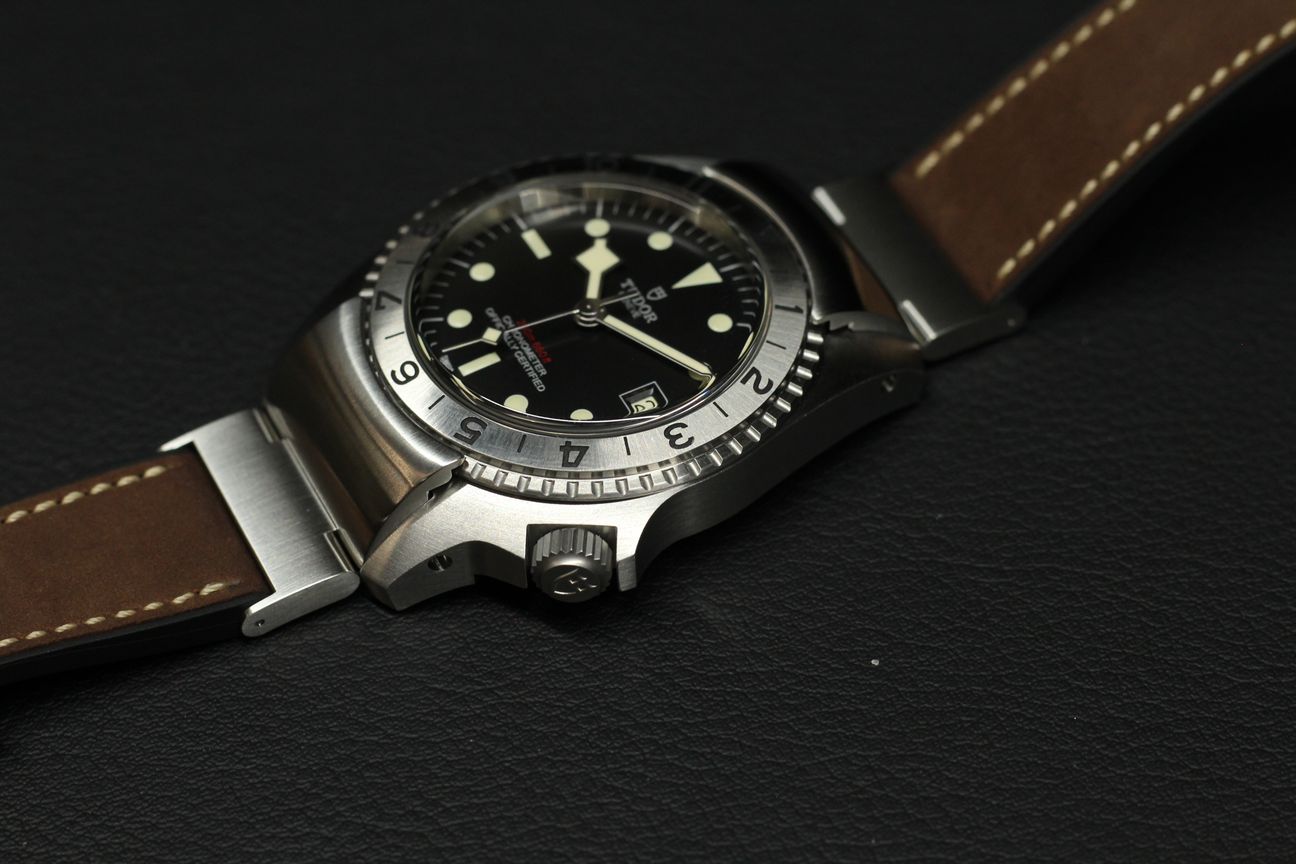 The matte dial with painted luminous triangle hour marker that was teased in the weeks leading up to the show was the dial from Black Bay P01.

“In 1967, TUDOR, who had been supplying the US Navy with divers’ watches since the late 1950s, began development of a new watch needed to meet a set of specifications required by the American government and incorporated the results of the latest research carried out by the brand’s engineers. This resulted in the production of prototypes, as well as a patent for a hitherto unseen function. The ambitious project, which carried the code name “Commando”, never came to fruition. In 2019, the TUDOR Black Bay P01 model – which stands for prototype 1 – is inspired by a prototype developed as part of this study and kept in the brand’s archives, only to have its unique aesthetic brought to life 50 years later. The Black Bay P01 reflects the exploratory nature of the project, a cross between a divers’ watch and a sailing watch.” 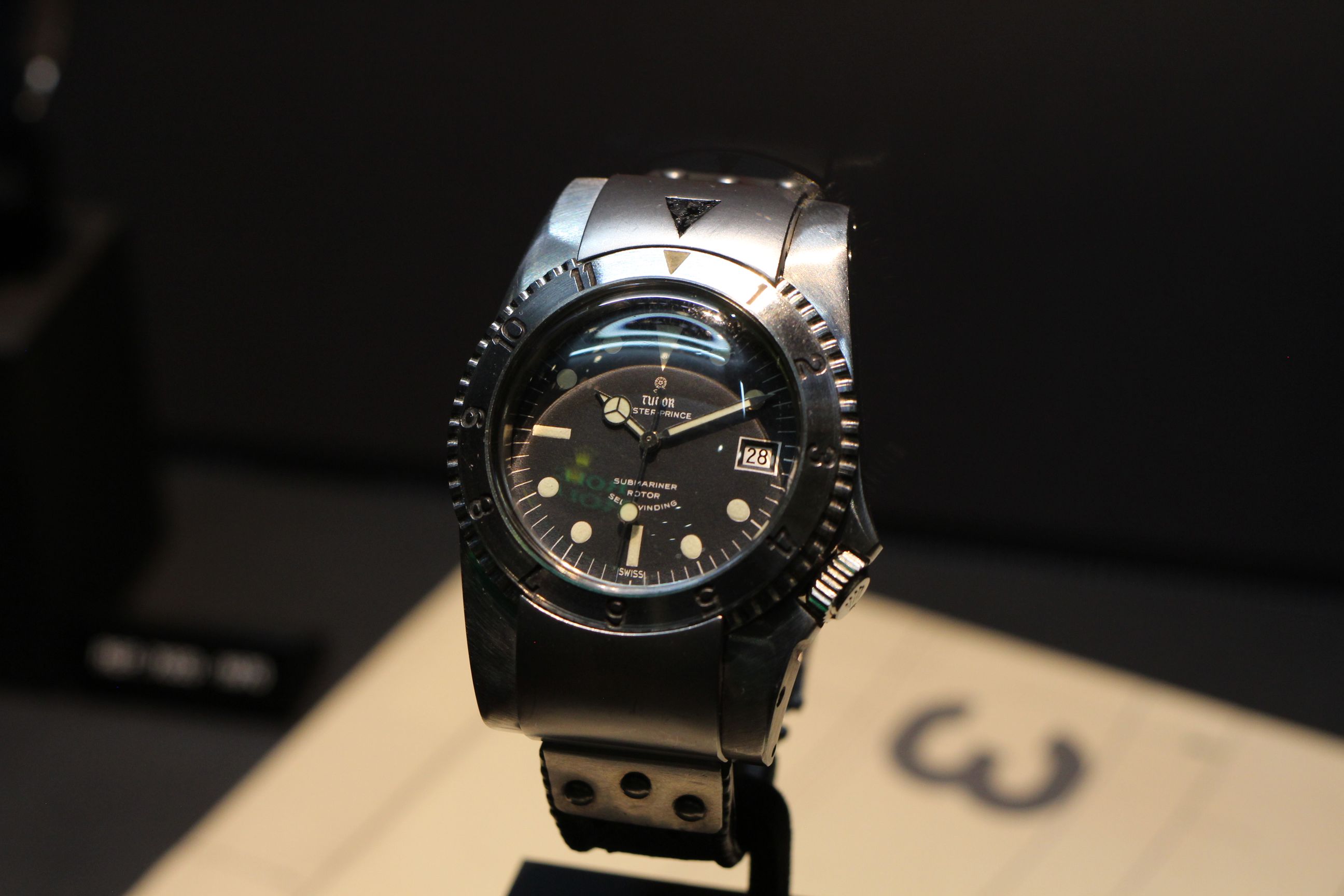 An example of the original prototype from the 1960s.

The 42mm case of the Tudor Black Bay P01 is fitted with a steel 12-hour bezel (bi-directional) and a domed sapphire crystal. However, the most unique feature of the watch (by far) is its hinged end-link, bezel locking system that is located on either side between the lugs. The locking mechanism consists of hinged claw-like pieces – one on either side of the lugs (Tudor is calling them ‘mobile end-links’) – that clamp down onto the fluted rim of the bezel and secure it in place.

The Tudor Black Bay P01 is fitted with a domed, matte black dial with painted (rather than applied) luminescent hour markers – something that was teased on Tudor’s Instagram in the weeks leading up to the show. Additionally, like the original 1960s prototype, the Black Bay P01 features a date window (without a Cyclops) at the 3 o’clock location; however whereas the original had a dial with entirely white text, the new P01 has its depth rating in red. Like other watches in Tudor’s Black Bay collection, the P01 is fitted with the brand’s signature, “snowflake hands” – however the original 1960s prototype featured Mercedes-style hands like those found on later-era Tudor sports watches.

The ‘mobile end-link’ design adds a significant amount of bulk and perceived lug-to-lug length to the Black Bay P01; and due to its structure, Tudor is only offering the watch (at this time) on an integrated hybrid rubber/leather strap with a folding clasp and safety latch. Keeping with the tool-watch theme of the piece, all of the surfaces on the Tudor Black Bay P01 – from its case to its clasp – have been given a satin-brushed brushed finish. Pricing is set to be $3,950. 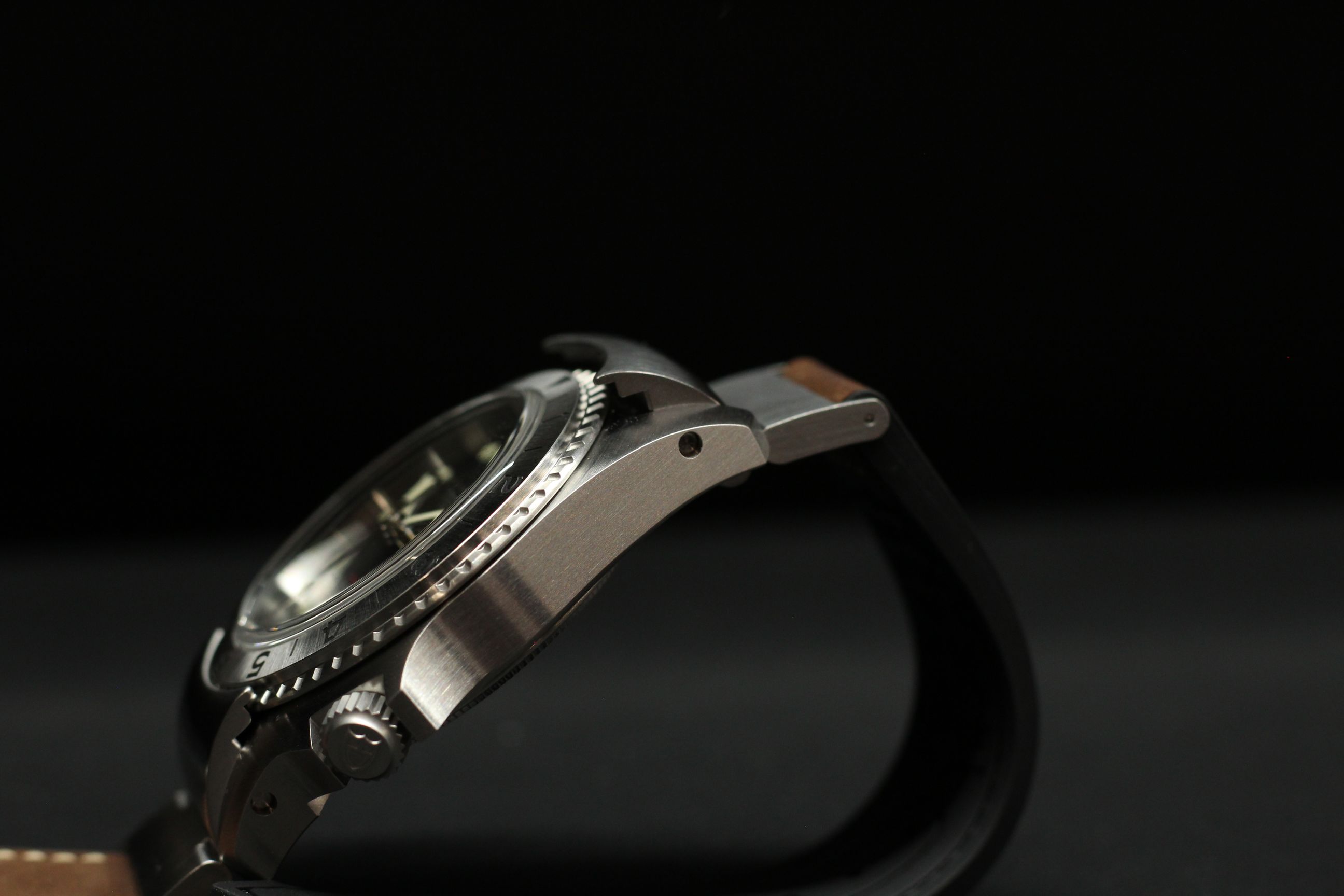 The unique bezel locking mechanism adds a significant amount of bulk to overall appearance of the watch. 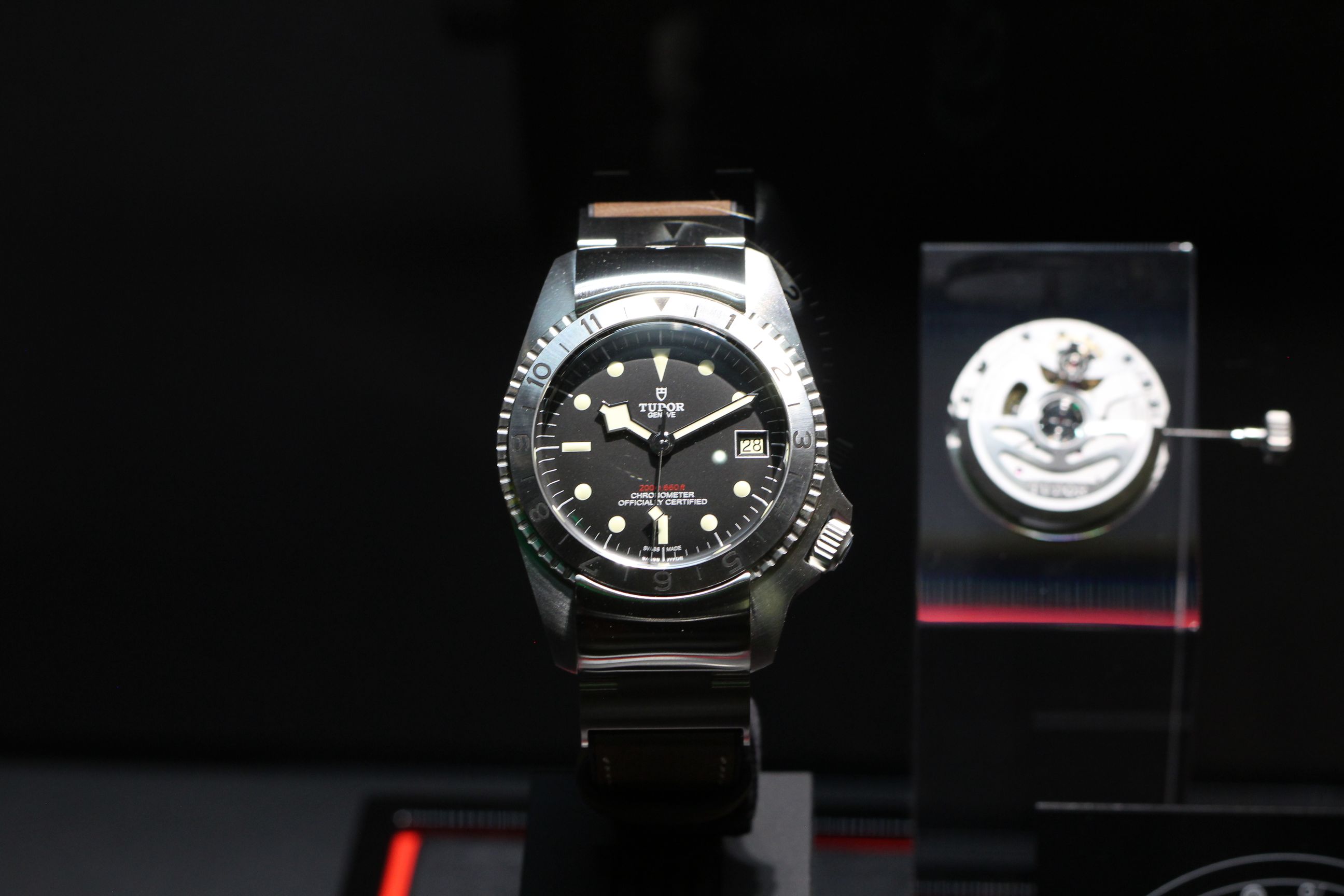 Would you wear the new Tudor Black Bay P01?