Speed and “extreme machines” have always been a big influence on Bell & Ross, the cult watch brand founded in Paris in 1992 that has been steering course towards more horologically significant watches since opening its own manufacture in La Chaux-de-Fonds, Switzerland in 1992. In recent years the brand, which pays homage to fighter jet instrumentation, has been creating concept cars and motorbikes alongside watch collections echoing the speed, style, and beauty of these machines. 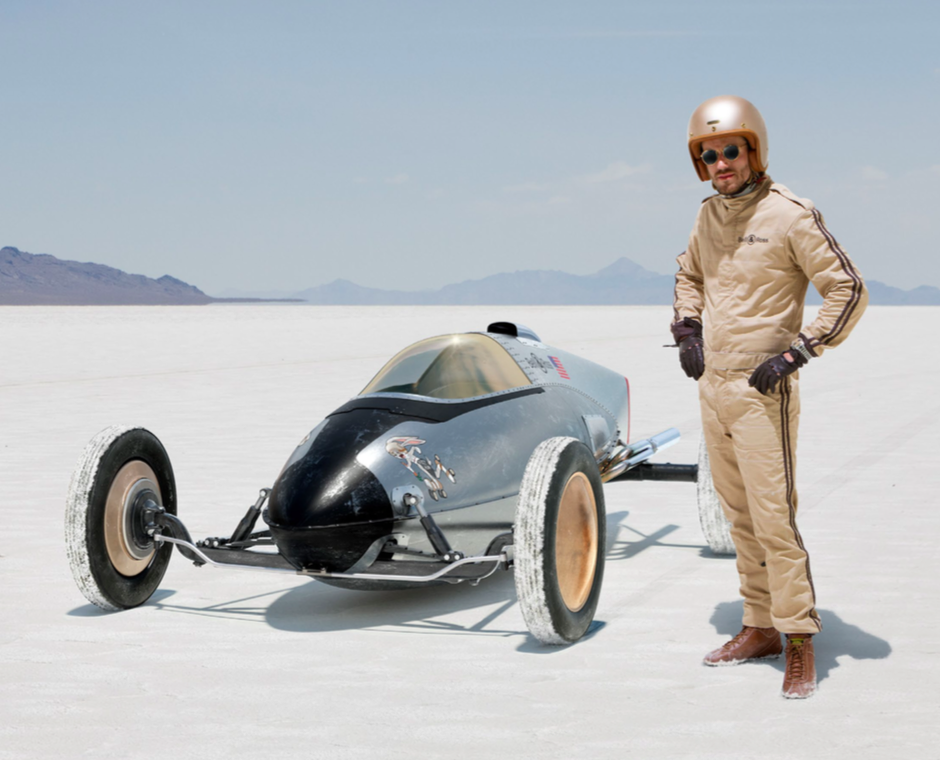 In 2014 they debuted the B-Rocket, a retro-styled streamlined motorbike evoking those built to break land speed records at the Bonneville Salt Flats. In 2016 they created the Aero GT aircraft-inspired supercar concept with a more modern “stealth fighter” vibe. And this year they’re gunning the engines on something called a Bellytanker, based on the Bonneville race cars fashioned from aircraft fuel tanks that set speed records in the 1940s. Now, let’s move on to the watches by Bell and Ross. 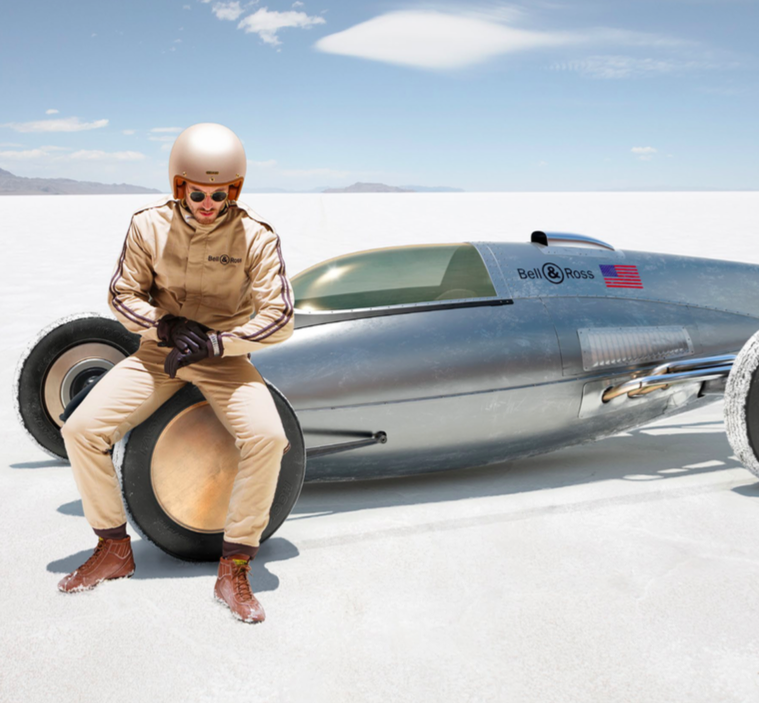 With such an aerodynamic vehicle, breaking the record should come easily. (Credit: Bell and Ross)

The Bellytanker watches “combine both aeronautical influences and numerous nods to the watchmaking world”, as Bell & Ross puts it. The bodywork – essentially part of an airplane that’s been re-purposed with four wheels – equates to the case of a watch. The glass covering the cockpit is the watch’s crystal. Copper detailing is a nod to the decoration on certain 1940s-era timepieces. And you can take it where you will from there. The first watch in the new Bellytanker Collection is the BR-V1 92, a classic round-dialed piece with an offset date window that is otherwise aimed at pleasing purists. The thin, flat brushed steel case clocks in at 38.5 mm. The solid case back features an engraved image of the Bellytanker, while the “ultra-curved” sapphire crystal brings to mind the glass covering an airplane cockpit. The metallic copper dial is echoed on the race car’s wheel rims. And the aircraft-shaped counterweight on the seconds’ hand is one of Bell & Ross’ new signature details. 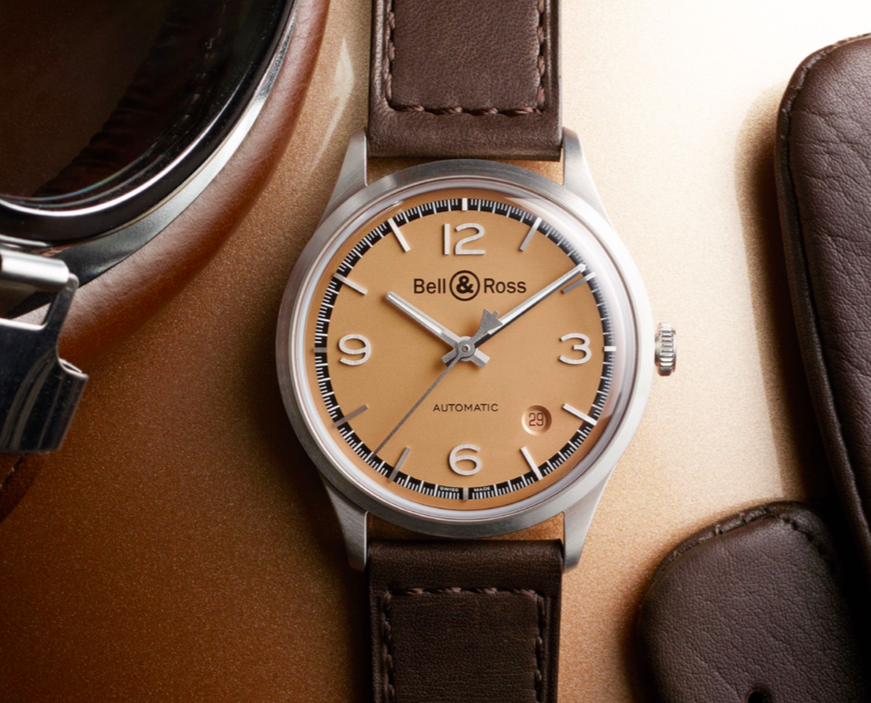 The look on this watch is that of a classic watch from a vintage (1940’s) era. (Credit: Bell and Ross)

The BR-V2 94 meanwhile is the real closer. A chronograph version of the BR-V1, it obviously stakes stylistic cues from vintage Daytona and Speedmaster models but with a distinctive Bell & Ross edge and a nod to the famed P-51 Mustang fighter. Available on either a brown leather strap or stainless steel bracelet, the case size is better suited to men of style at 41 mm, while the sapphire case back reveals the chronograph movement. The bezel features a classic tachymeter scale. And the “panda” dial with its contrasting black subdials is a real winner. The black of the minute track evokes the “stealth” paintwork on the Bellytanker’s nose. And the metal skeleton hands are filled with Superluminova for visibility in all conditions. Both are being produced in a limited edition of 500 pieces, and the BR-V2 94 at least is destined to become coveted by collectors. 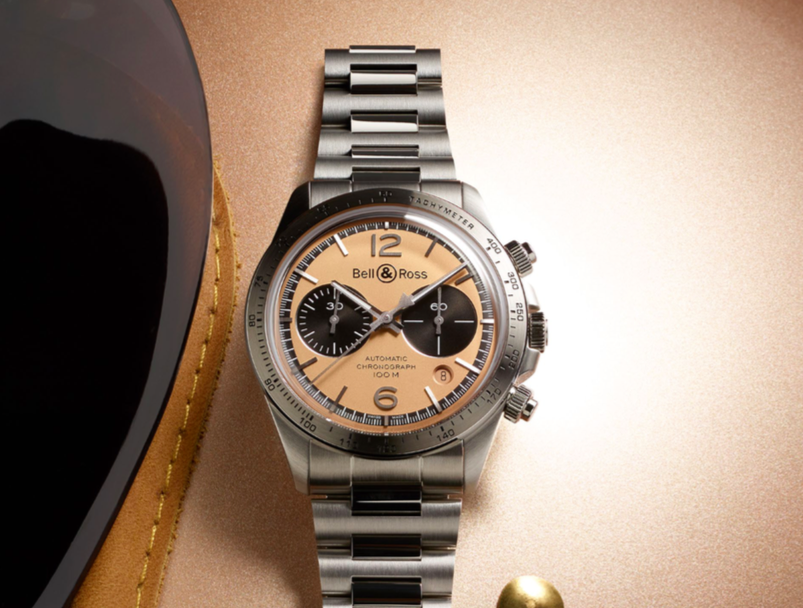 There is a chronograph version of the watch. (Credit: Bell and Ross)

See the collection of Bell & Ross watches from Baselworld 2017.