For 2020, Breguet takes its ultra-thin tourbillon reference and dresses it up with a striking blue enamel dial. This latest addition to the lineup of classically-styled Breguet watches is the Classique Tourbillon Extra-Plat Automatique 5367PT in platinum with a blue “Grand Feu” enamel dial. 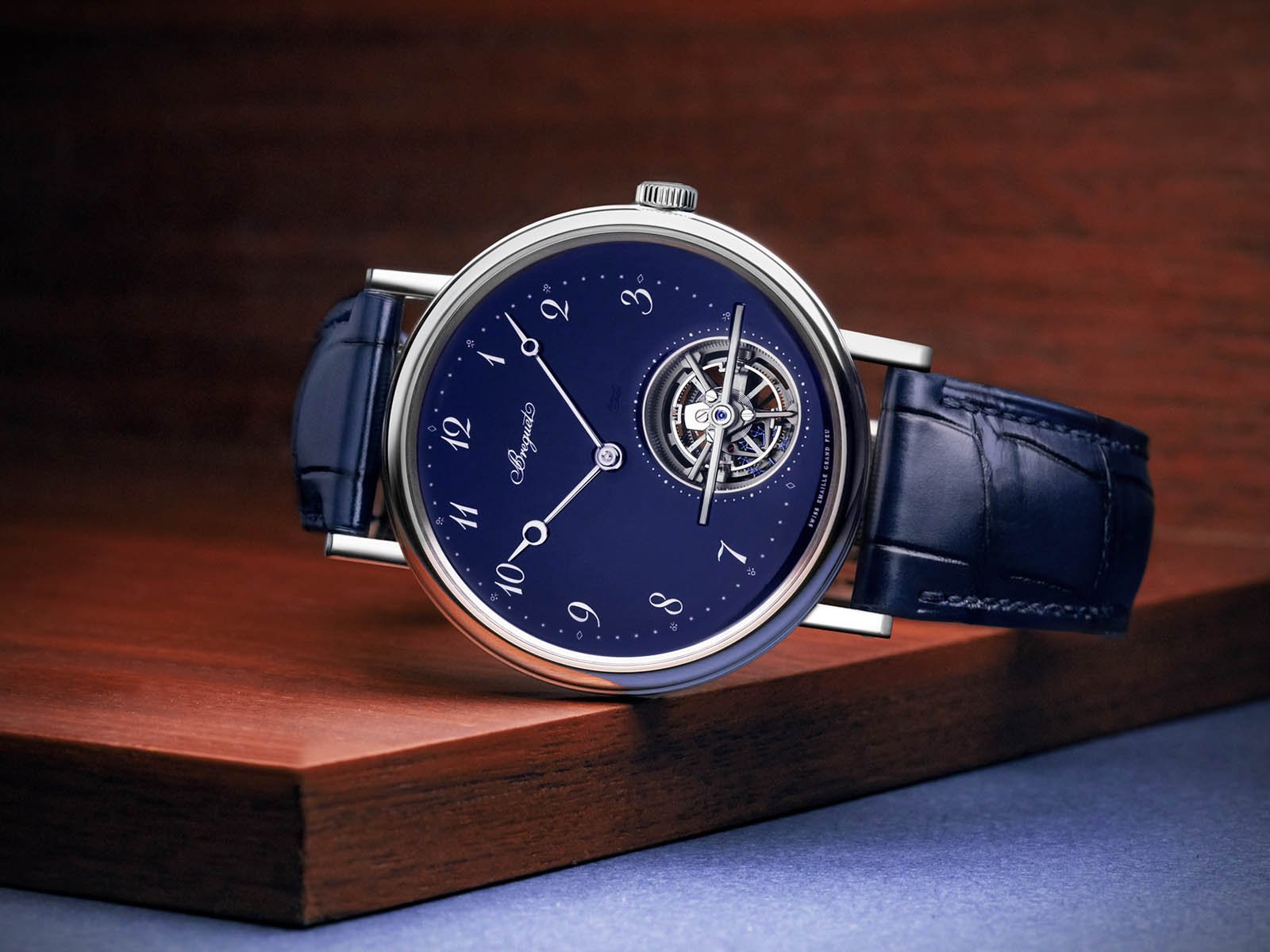 Breguet introduced the Classique Tourbillon Extra-Plat Automatique ref. 5367 in 2017. While similar to the ref. 5377, which debuted in 2013 as the thinnest automatic tourbillon in production, the ref. 5367 offers a more understated approach by replacing the guilloché dial with an enamel one and removing the power reserve indicator. 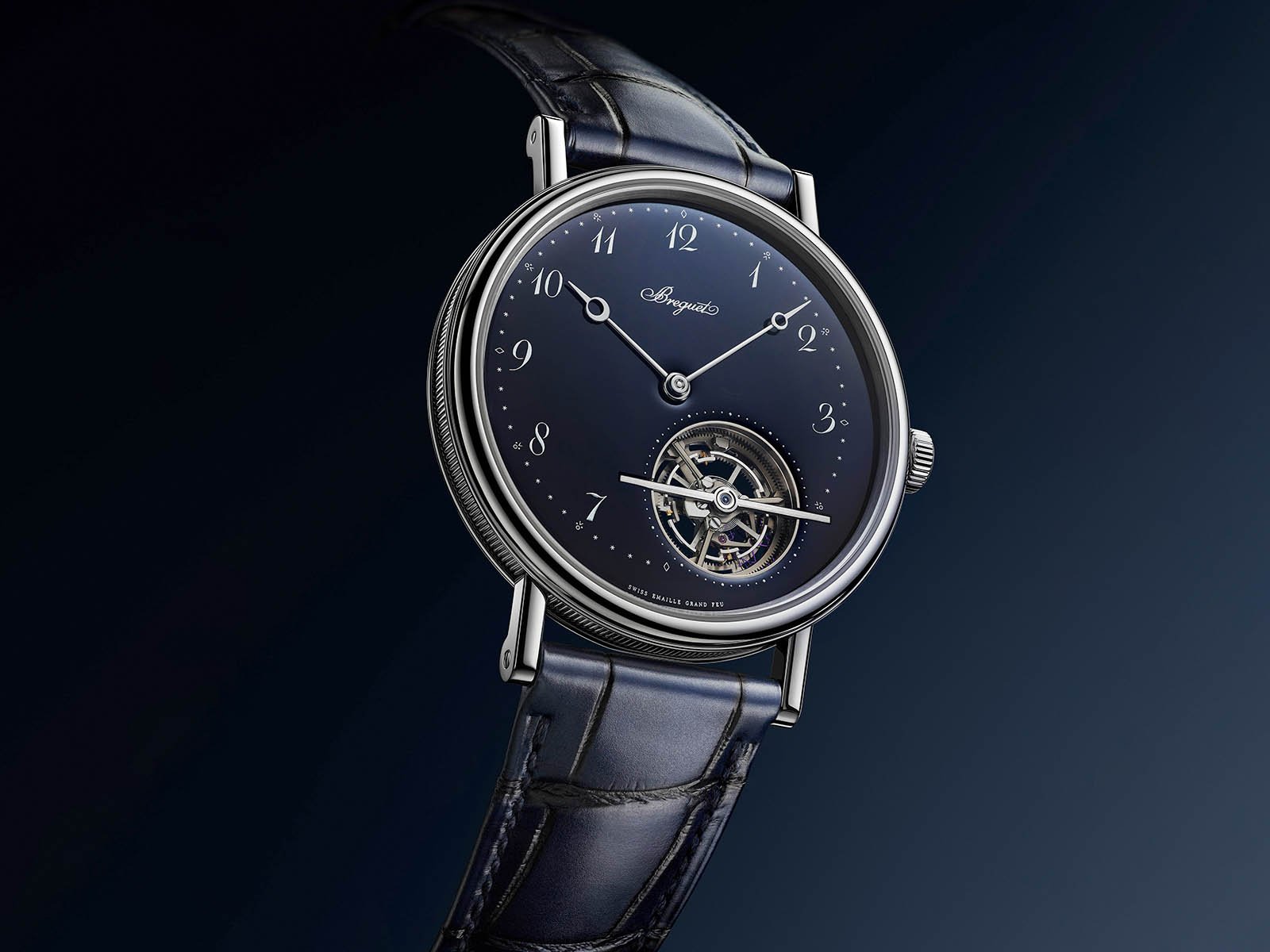 The new reference 5367PT dons a 41mm platinum case that measures a mere 7.45mm thick, complete with the fluted caseband and welded lugs that are characteristic of the Classique collection. To achieve this remarkable thinness for a tourbillon watch, Breguet has designed the 3mm Caliber 581 to have a peripheral rotor, which winds the mainspring via a peripherally-mounted oscillating weight fitted along the outer edge of the movement.

Most automatic watches have their rotors mounted in the center of their movements, meaning that at any given point in time, roughly half the movement is covered by the rotor and is not visible. With the rotor placed around the periphery of the movement on the Classique Tourbillon Extra-Plat Automatique 5367PT, the stunning architecture and decoration of the caliber can be admired entirely unobstructed through the sapphire caseback. 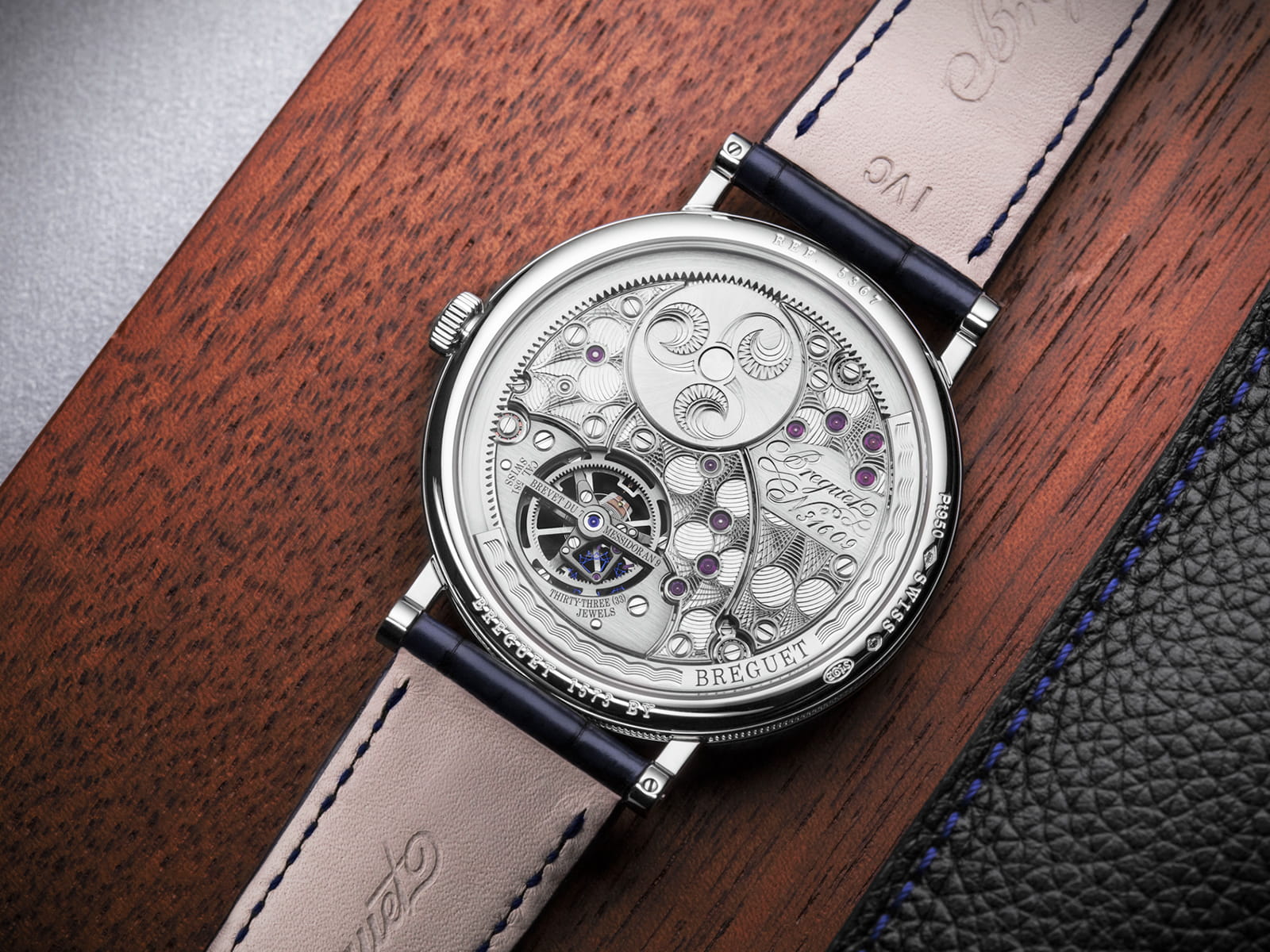 Like previous versions of the ref. 5367, the new Breguet Classique Tourbillon Extra-Plat Automatique also features a Grand Feu enamel dial, but one that is finished blue instead of white. Grand Feu (which is French for “big fire”) refers to the high temperatures needed to make the dial. Multiple layers of blue enamel are applied to the gold dial with each layer fired up in a furnace at more than 1,470 degrees Fahrenheit. The dial is then hand-polished until the surface gives off just the right sheen. Making Grand Feu enamel dials is a rare craft that only a few watch brands can accomplish in-house. 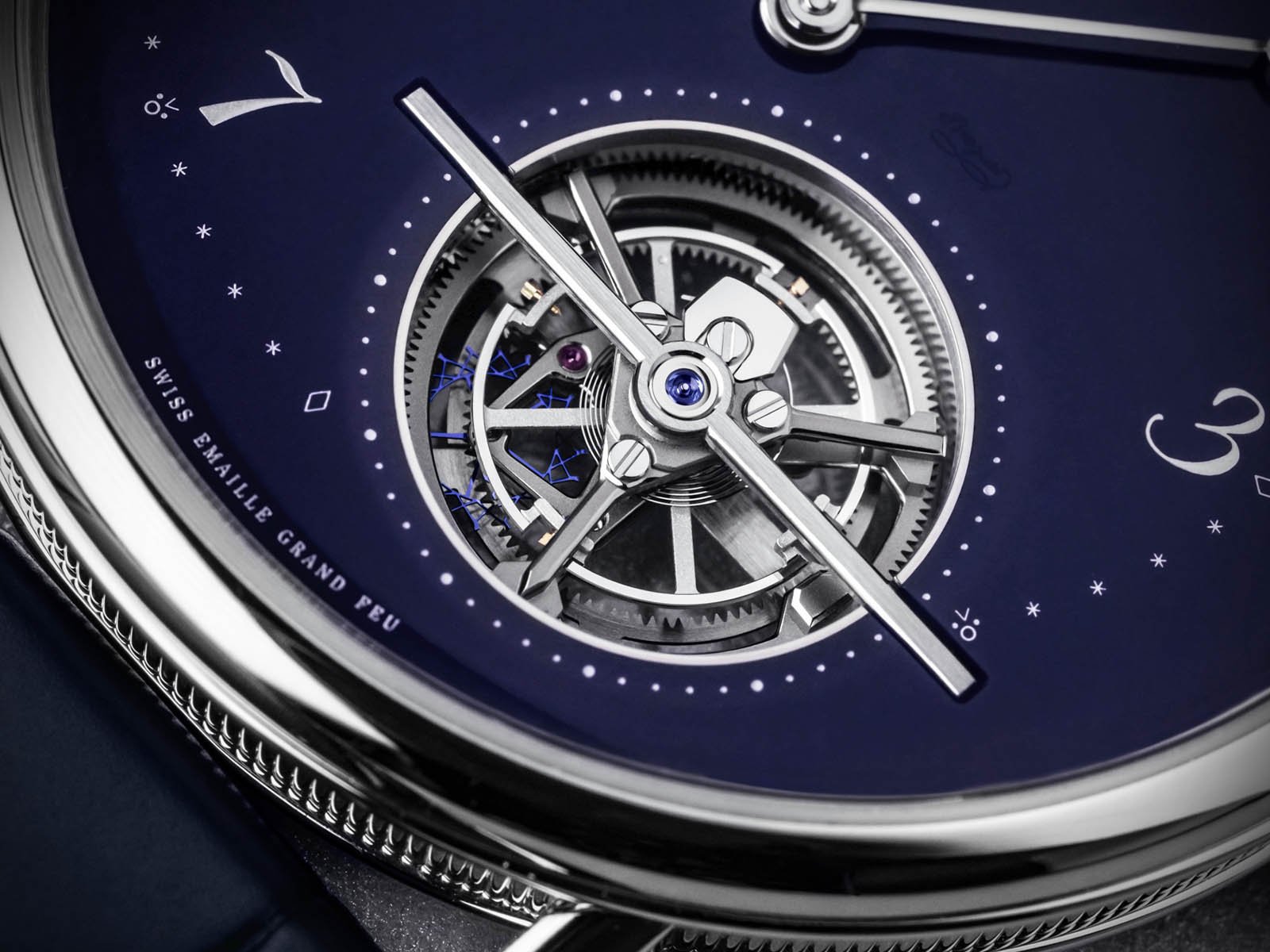 The beautiful blue enamel background serves as the perfect contrast to the silvered gold Breguet numerals applied to the dial and the open-tipped Breguet hands. The time display is placed slightly off-centered to make room for the tourbillon mechanism. Located in between 4 and 6 o’clock, the tourbillon is housed in a titanium carriage with a balance spring that oscillates at 4 Hz – a high frequency for a tourbillon balance spring.

Finally, carrying on the blue and white metal colorway of the watch, the new Classique Tourbillon Extra-Plat Automatique 5367PT is fitted with a blue alligator strap with a platinum triple folding clasp. Although it is not a limited edition, Breguet has opted to reserve the blue dial version of the Classique Tourbillon Extra-Plat Automatique as a boutique exclusive.

*All images courtesy of Breguet 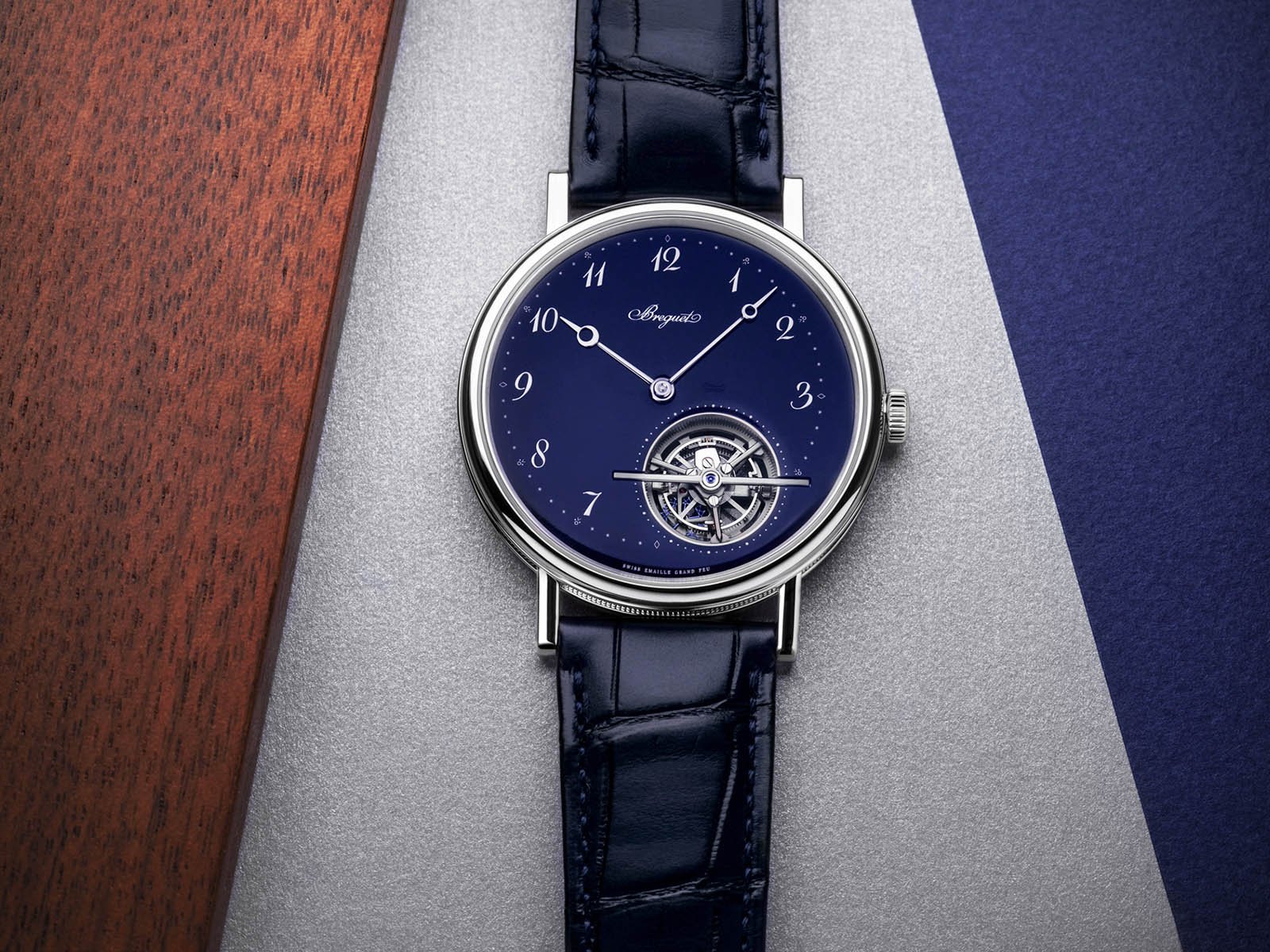