We can only imagine that the CEOs of other luxury watch brands are wondering if Breitling can actually kick-start a trend with its new conservation-oriented timepieces. On May 10th, the Swiss powerhouse known for its aviation-inspired watches launched their latest limited-edition chronograph in Bali, which commemorates the brand’s partnership with Ocean Conservancy. 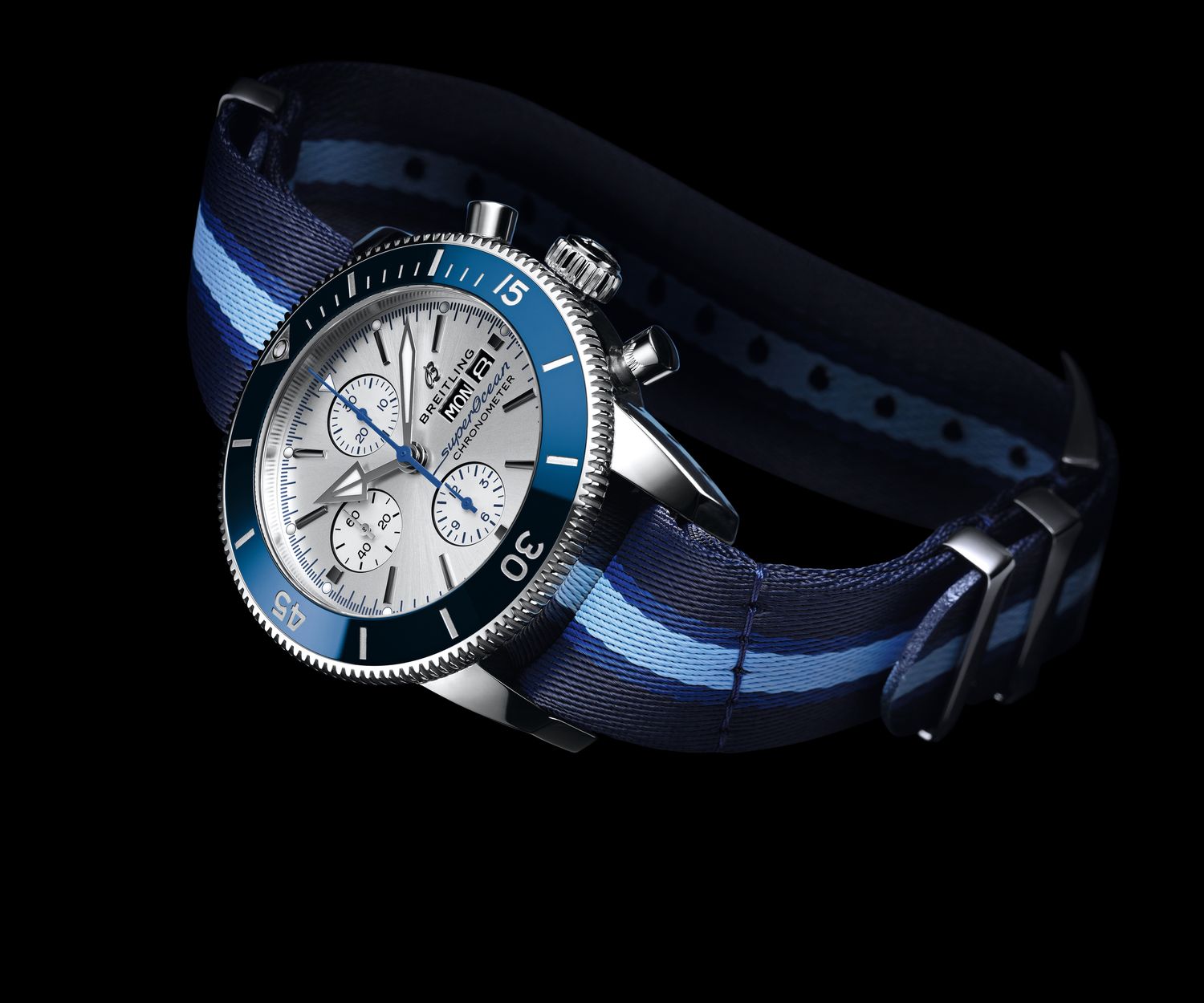 The latest addition to the Superocean collection commemorates the Breitling’s partnership with Ocean Conservancy. (Image: Breitling)

The nonprofit environmental advocacy group “helps formulate ocean policy at the federal and state government levels based on peer-reviewed science” to tackle threats to ocean wildlife and ecosystems. A worthy cause if not one that we immediately associate with watches costing tens of thousands of dollars. Of course there’s a celebrity name involved as well: Kelly Slater, winner of 11 world surfing championships and the key member of Breitling’s Surfer Squad.

The Surfer Squad, which also includes Australians, Sally Fitzgibbons and Stephanie Gilmore, is part of Breitling’s campaign to “celebrate the collective spirit of squads united in pursuit of their mission.” In addition to the Surfers Squad, there is the Cinema Squad (featuring Brad Pitt and Charlize Theron), the Explorer Squad and the Jet Squad. 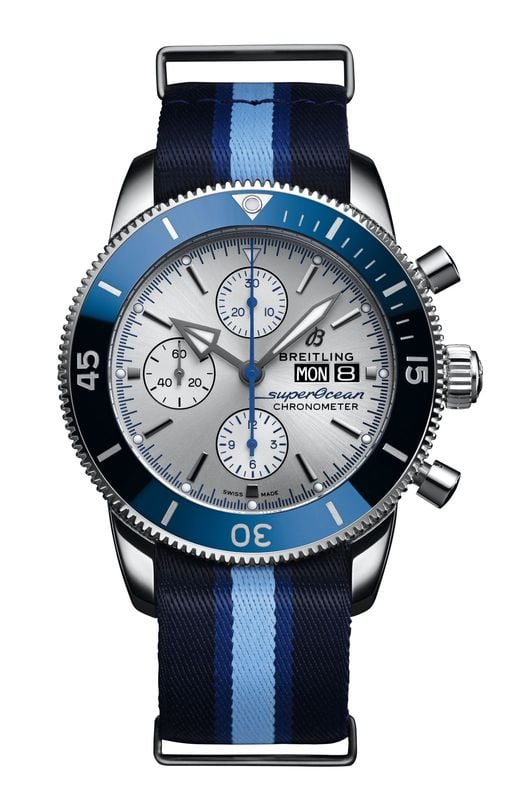 In Bali, Breitling organized its guests as well as local volunteers in a beach cleanup initiative. “I always say – and I believe that I can speak on behalf of the entire Surfers Squad – that beaches are, in effect, our offices,” Slater said at the event. “What we have seen here and on beaches and in oceans around the world is shocking, and I would like to thank Breitling and Ocean Conservancy for their shared fight against plastic pollution. Everyone can contribute to a cleaner environment – for ourselves and for future generations.” 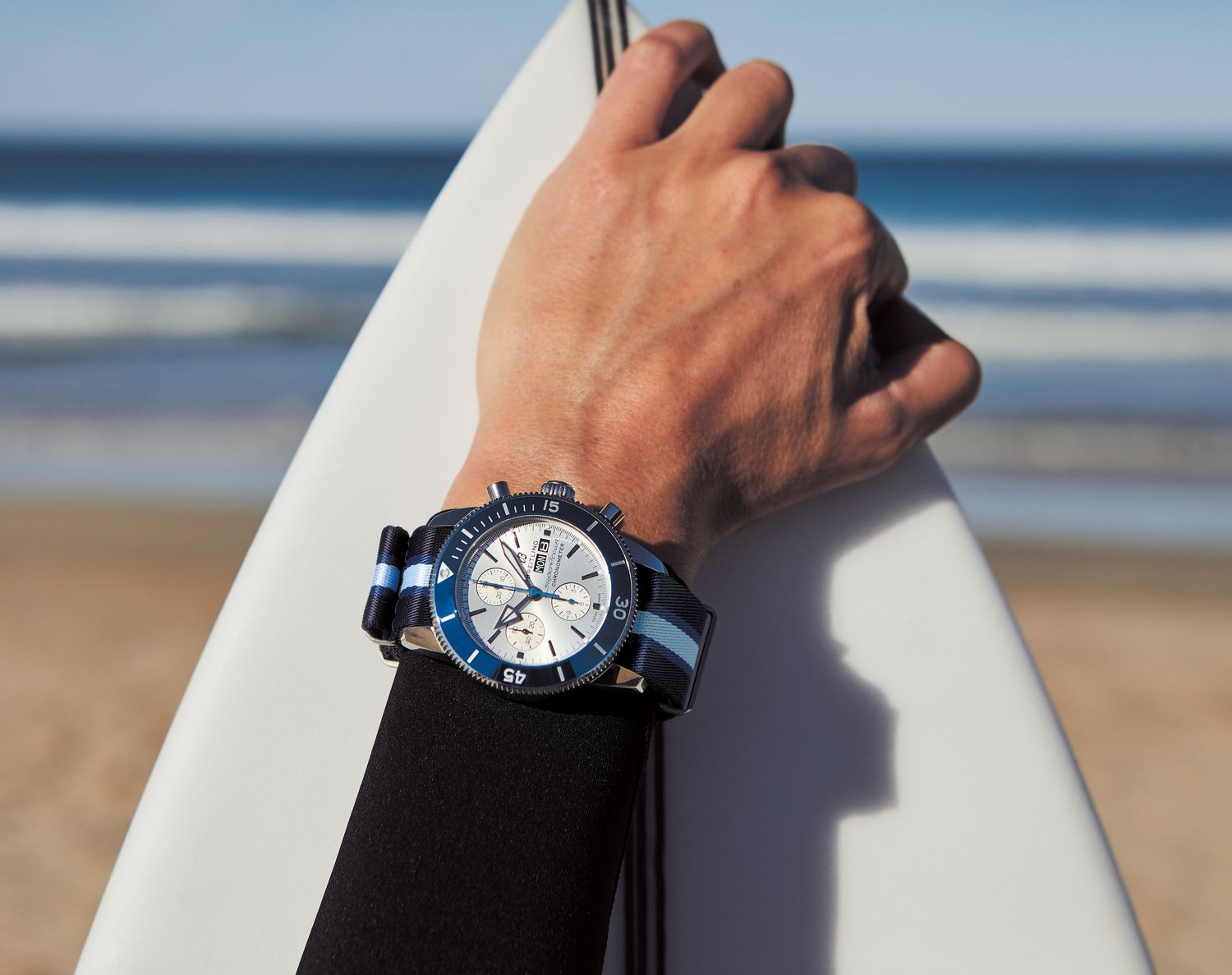 The included NATO straps are made from ECONYL yarn, an innovative material constructed from repurposed nylon waste. (Image: Breitling)

As for the 44mm watch itself, limited to just 1,000 pieces, it’s most distinctive features are a caseback that is engraved with the Ocean Conservancy logo and the limited edition number, and a pair of NATO straps made of ECONYL yarn, an innovative material repurposed from nylon waste, “one source of which is fishing nets from oceans around the world,” Breitling notes.

The unidirectional rotating bezel is a standard Superocean feature, but the dot at 2 o’clock as well as the minute and hour hands are coated with Super-LumiNova that emits a blue light instead of the usual green. In keeping with the same theme, there are also blue accents and a blue central second hand, in addition to tone-on-tone sub-dials with blue accents. Lastly, like its siblings in the Superocean Heritage collection, the new Ocean Conservancy Limited Edition is powered by Breitling’s self-winding Caliber 13 movement, offering users a 48-hour power reserve. 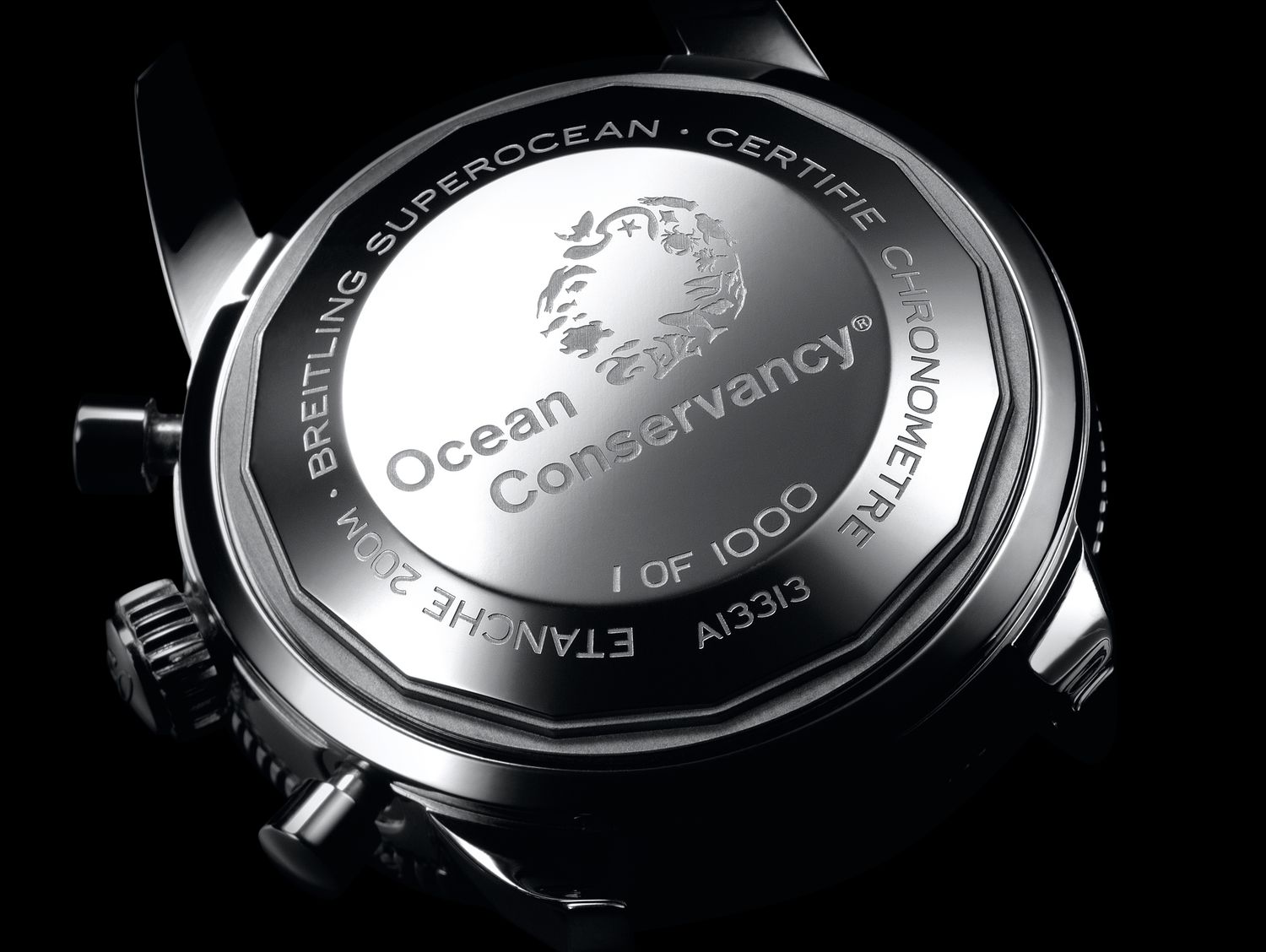 The caseback is engraved with the Ocean Conservancy logo and the limited edition number for the watch. (Image: Breitling)