Denoted first and foremost by its classical styling and baton indices, the Reverso Tribute collection has been growing steadily in recent years, but this latest platinum-cased edition of 50 pieces is about as charming as they come. Slightly resembling the rectangular charm of the Rolex Cellini Prince, the new Reverso Tribute Tourbillon Duoface, a new model from Jaeger LeCoultre is a taking a slight deviation from their previous releases. 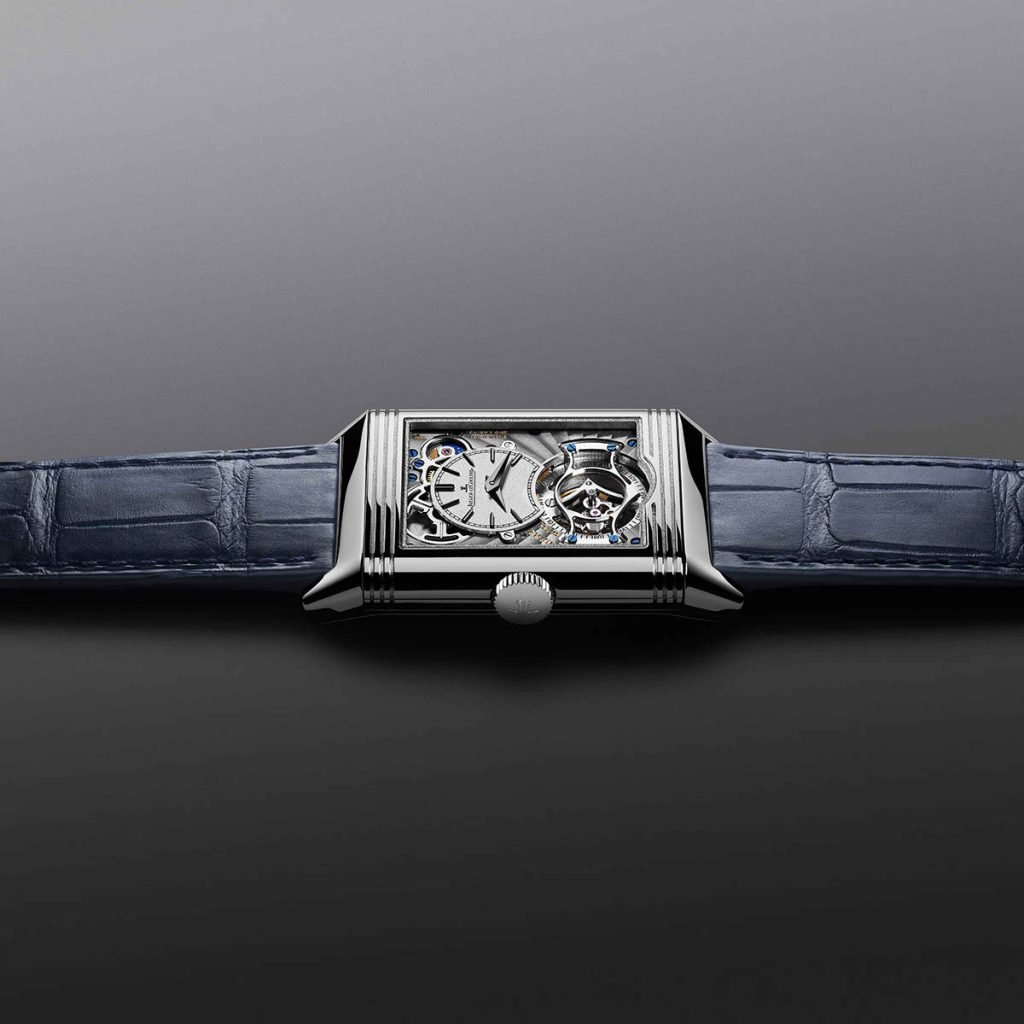 Its design discretely marries the sunburst blue hue of the Reverso Tribute small seconds, with the high watchmaking elegance of the Reverso Tribute Gyrotourbillon in a single package, all while maintaining a sticker price that’s at least a touch more approachable than the behemoth Gyro—$123,000, to be precise. These Duoface models in particular deliver impressive versatility as rather than a steel back, its wearer has the ability to alternate between two distinct dials, both of which whose time can be set independently of one another. 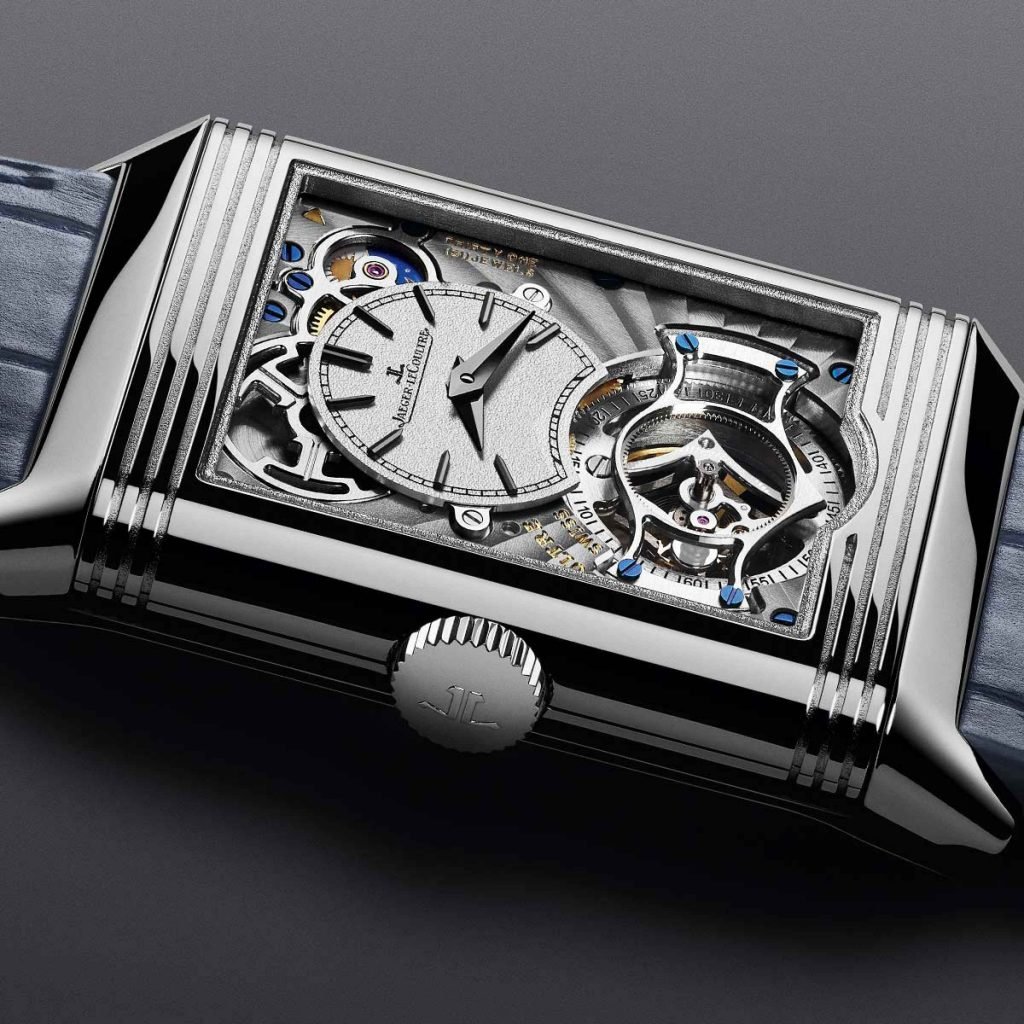 Jaeger‑LeCoultre is taking a new step in terms of mechanical and aesthetic expertise. (Credit: Jaeger-LeCoultre)

Powered by the new JLC caliber 847, the hand-wound unit is tastefully compact, measuring a modest 27.4mm wide, 9.15mm thick, and only 45.5mm lug-to-lug. Surprisingly this is smaller than the balance of the Reverso Tribute line, and smaller than pretty much any Duoface models in the collection as well. I’ve long been partial to the more conservatively sized Reverso models, and frankly I think sizing this new release the way they did was a smart move. The Reverso was never meant to be a large and ostentatious watch, and anyone who’s ever tried on one of the oversized Reverso Squadra models will attest that bigger is most certainly not better in this case. 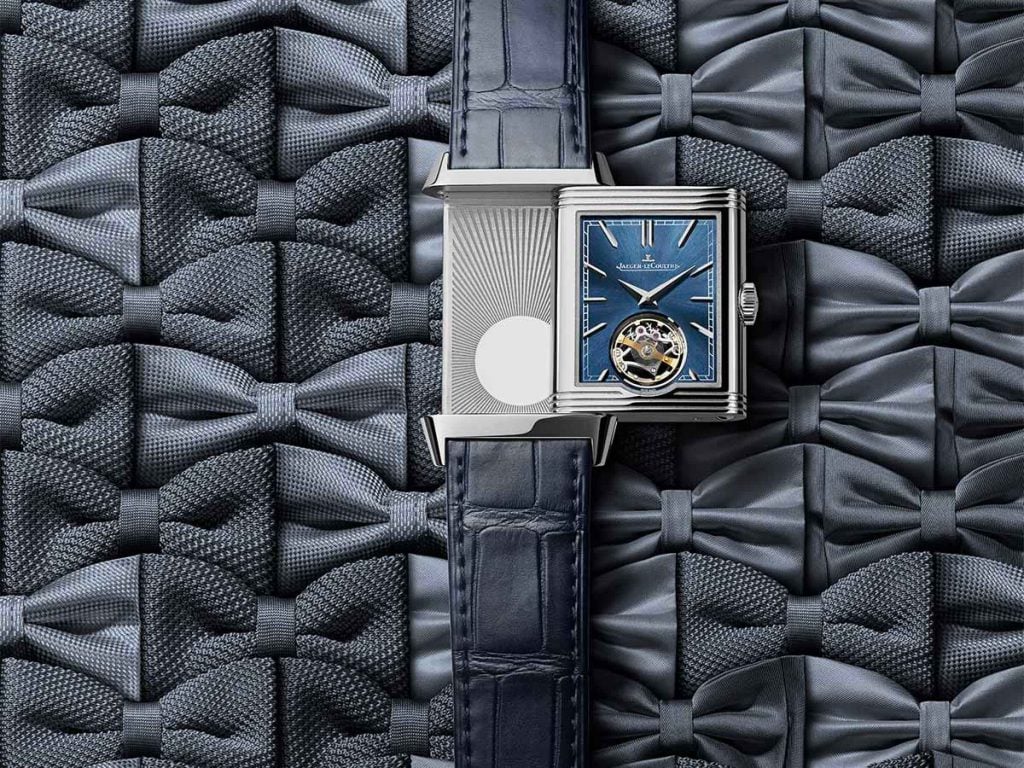 While the more traditional blue dial of this new release has plenty of appeal, the attention to detail of its opposing side is nothing shy of exceptional.  A silver grained dial, Geneva striping radiating from the opening of its exposed tourbillon, and its cleverly designed tourbillon bridge are all finished to a standard that has long been expected from JLC. Any kind of partially openworked watch ends up coming off as at least a little flashy, however I suspect that in these compact dimensions the Reverso Tribute Tourbillon Duoface will manage to fly a little under the radar. With 46 Reverso models already in the catalog, it’s not like the collection was short on options these days, especially considering JLC had recently trimmed this down from somewhere north of 80+. That said, when they come to the table with something as sleek as this I’m not going to complain.