Since it was first introduced in 1957, the Omega Speedmaster has primarily been a sports watch. Purpose-built for the race track, the brand’s legendary chronograph quickly became the go-to watch for space exploration and cemented its reputation as the official timepiece of astronauts when it became the first watch worn on the surface of the moon.

However, a new model has just joined the Speedmaster lineup, and while could certainly still be considered a tool watch and arguably offers even more functionality than the NASA-certified Speedmaster, it takes the classic blueprint of the brand’s chronograph and reimages it in an entirely more refined and vintage-inspired fashion. Enter the Omega Speedmaster Chronoscope. 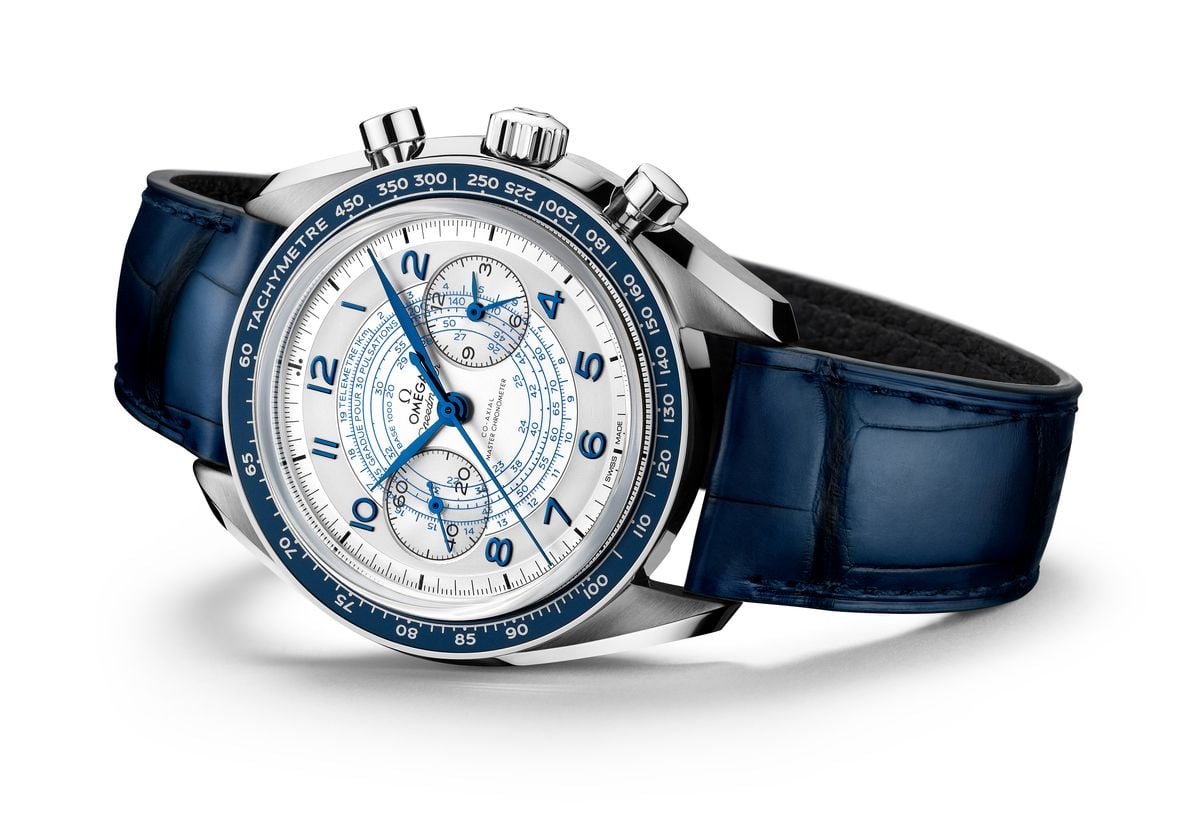 About The New Omega Speedmaster Chronoscope

For many collectors and enthusiasts, the Omega Speedmaster will always be considered the Moonwatch, but the brand’s history of creating chronograph watches dates back significantly further than the moon landing. Instead of looking to the Speedy’s own archives for design inspiration, the new Speedmaster Chronoscope takes its design cues from some of the brand’s older chronograph models from the 1930s and 1940s that pre-date the creation of the Speedmaster.

The name Chronoscope blends the two traditional Greek words, “chronos” (meaning time) and “scope” (meaning to observe). It should also be noted that this is not the first time that Omega has used the Chronoscope name for a watch model, and you will even find photos of Buzz Aldrin wearing an older De Ville Chronoscope watch. As Omega defines it, a Chronoscope is a “device used to accurately determine the duration of a phenomenon” – and in that capacity, the new Omega Speedmaster Chronoscope certainly delivers. 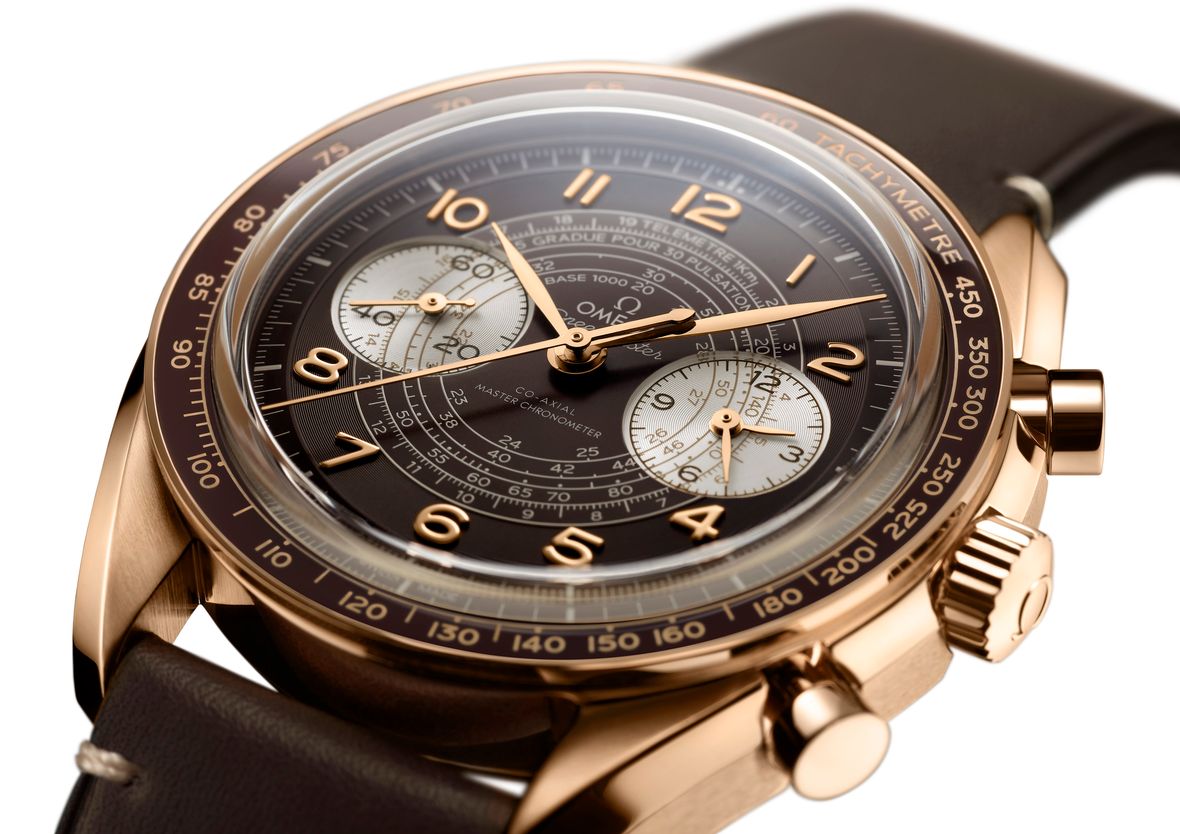 While the standard Omega Speedmaster pairs a chronograph complication with an external bezel that has a tachymeter scale, the new Speedmaster Chronoscope builds upon its design by adding both telemeter and pulsometer scales in a “spiral” track pattern at the center of its dial.

A tachymeter is used for measuring average speed based on distance, and this means that the new Omega Speedmaster Chronoscope can tell you how fast you are going, based on how far you have traveled – just like the standard Speedmaster. However, in addition to its standard tachymeter bezel, the Omega Chronoscope also has a secondary scale printed along the interior of its dial, which allows you to use this functionality for a wider range of speeds. Additionally, since the tachymeter scale measures the average travel time between two specific points, it makes no difference whether your journey is in miles or kilometers.

A telemeter can measure the distance between a specific event and the observer, based on the speed of sound. The event must be first visible and then audible (think of a lightning strike, which is then followed by the sound of thunder), and the telemeter works by measuring the duration between the visual and auditory observations of the event. By using the chronograph in conjunction with the telemeter scale printed on the interior of the dial, the Omega Chronoscope can tell you exactly how far you are from the observable event. 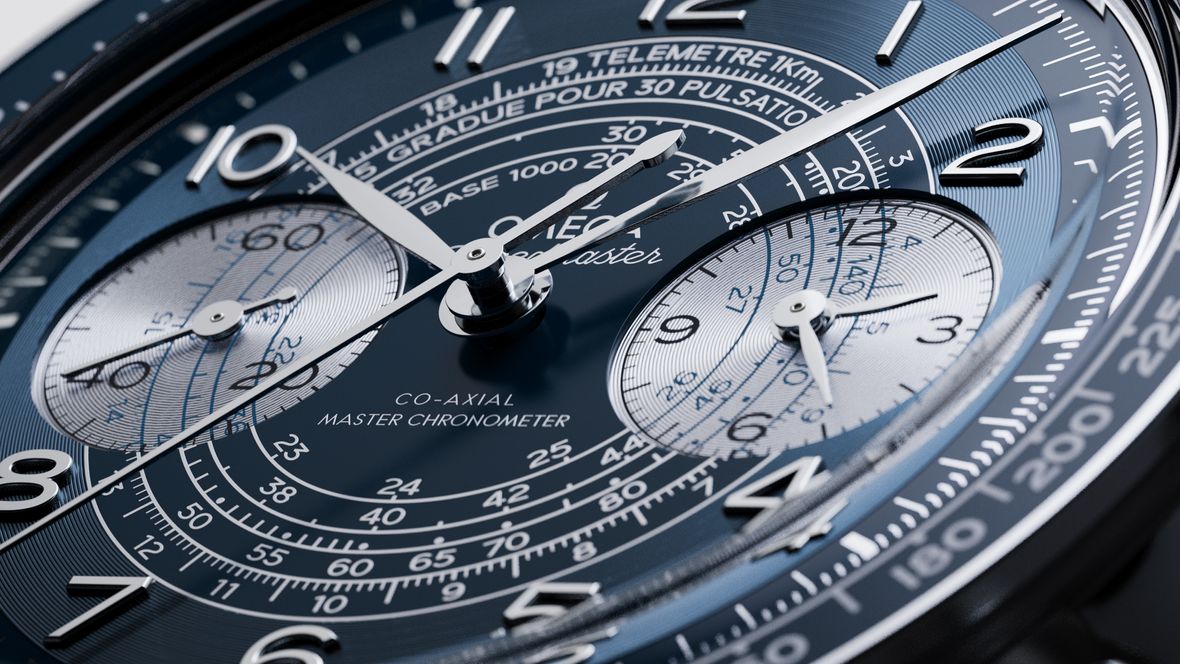 A pulsometer is a specialized scale that is used for taking the measurement of a human’s heart rate. Long before there were smartwatches and digital devices to calculate a patient’s pulse, doctors would use watches with pulsometer scales to measure a person’s heartbeat. The pulsometer on the new Omega Chronoscope follows a ‘Base 30’ scale, which means that all you need to do to measure a pulse is start the chronograph, count 30 heartbeats, and then reference the pulsometer scale on the interior of the Chronoscope’s dial.

Powering the new Speedmaster Chronoscope is the Omega Co-Axial Master Chronometer Caliber 9908 movement. Just like many of Omega’s modern self-winding Speedmaster watches, the new Chronoscope models feature a column-wheel controlled chronograph with a two-register layout, along with dual mainspring barrels and a silicon balance spring. However, just like the traditional Moonwatch, the Cal. 9908 is a manual-wind movement.

What this means is that the new Omega Speedmaster Chronoscope can be quite a bit thinner than its automatic-winding counterparts and measures just 12.8mm thick. However, despite its thinner profile, the Caliber 9908 movement retains the same 60-hour power reserve and hour hand adjustment functionality, which lets you jump the hour hand forward or backward in one-hour increments by pulling the winding crown out to the first position.

The METAS-certified Cal. 9908 movement sits on full display below a sapphire case-back and features a relatively closed structure with the majority of its visual presence occupied by a large upper bridge. With that in mind, Omega has decorated the movement quite nicely with Geneva waves that radiate out from the balance wheel, rather than the center of the movement (a first for Omega). 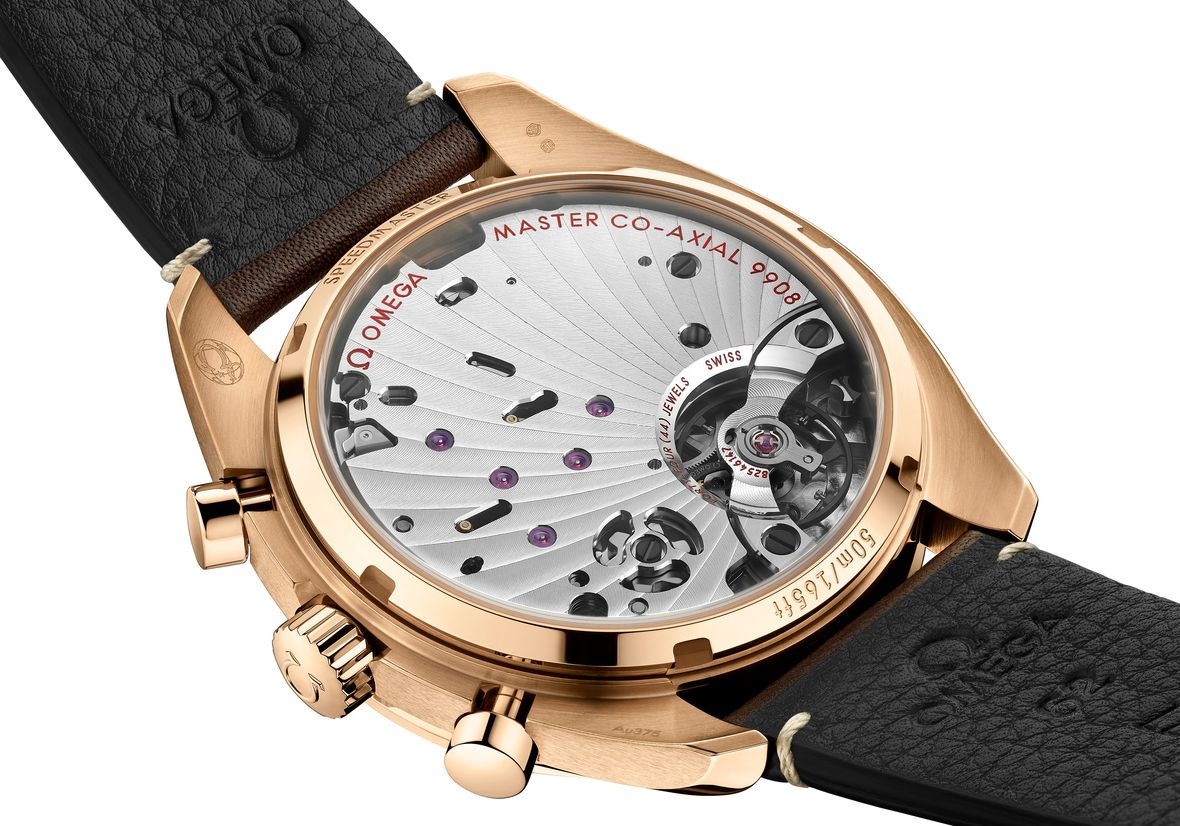 For its launch, Omega is offering the new 43mm Speedmaster Chronoscope in a total of 7 models spread across two different metal combinations.

There are a total of six new stainless steel Omega Speedmaster Chronoscope watches. Two models feature silvery dials with blued hands, two models have blue dials with rhodium-plated hands, and two models are fitted with “Panda” dials that have silvery surfaces with black subdials and blackened hands. Regardless of their color differences, all of the dial variations feature Arabic numerals and leaf-shaped hands.

All of the stainless steel models feature anodized aluminum bezel inserts atop their 43mm cases in either blue or black. Additionally, buyers will have their choice of either a matching stainless steel bracelet (which measures 21mm at the lugs and tapers to 16mm at the clasp) or a leather strap in either black, brown, or blue that has small perforations that reveal its red rubber interior. 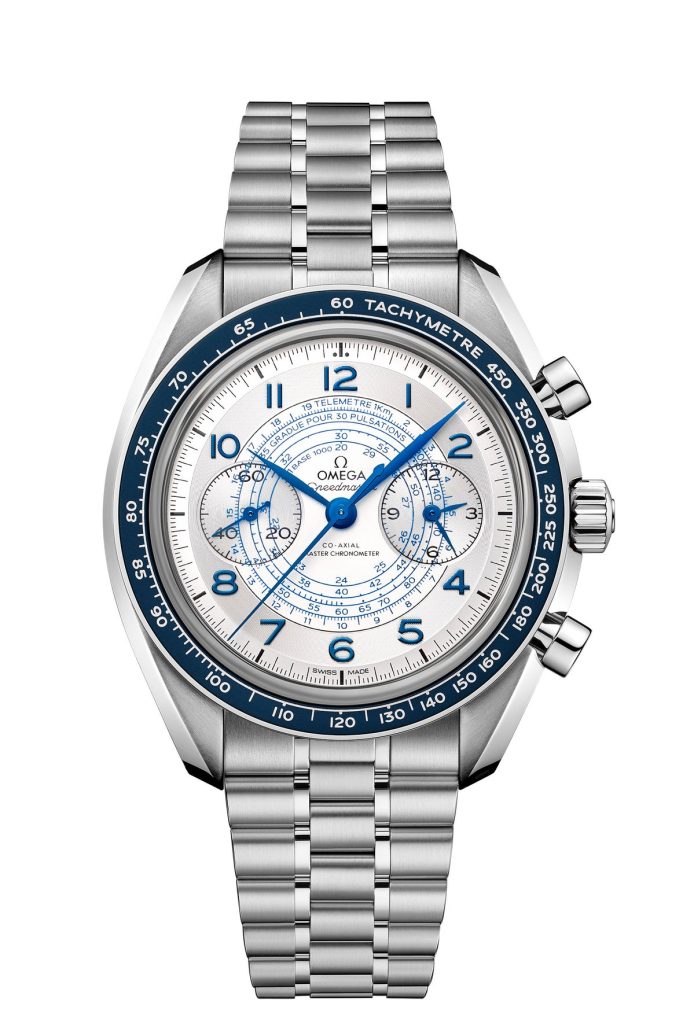 Along with the six stainless steel Speedmaster Chronoscope models is one piece in Omega’s own Bronze Gold alloy. Consisting of 37.5% gold along with other elements such as palladium and silver, Bronze Gold is a metal exclusive to Omega and it offers a beautiful soft pink with corrosion resistance.

The Bronze Gold edition of the new Omega Speedmaster Chronoscope is fitted with an oxidized bronze dial with a special patina finish and opaline silvery sub-dials. Additionally, unlike the six stainless steel Chronoscope models, the bezel insert on the Bronze Gold edition is made from brown ceramic with its tachymeter scale in “vintage” enamel (also a first for Omega), and it is exclusively offered on a brown leather strap with a matching Bronze Gold buckle.

The new Omega Chronoscope watches represent an entirely new side of the Speedmaster collection and they create a connection between the iconic Moonwatch and the brand’s early chronographs. Whether it was intended for racing or space exploration, the Omega Speedmaster has always been a relatively sporty watch; however, the new Chronoscope models reimagine the blueprint of the Speedmaster in a highly refined and vintage-inspired overall package. 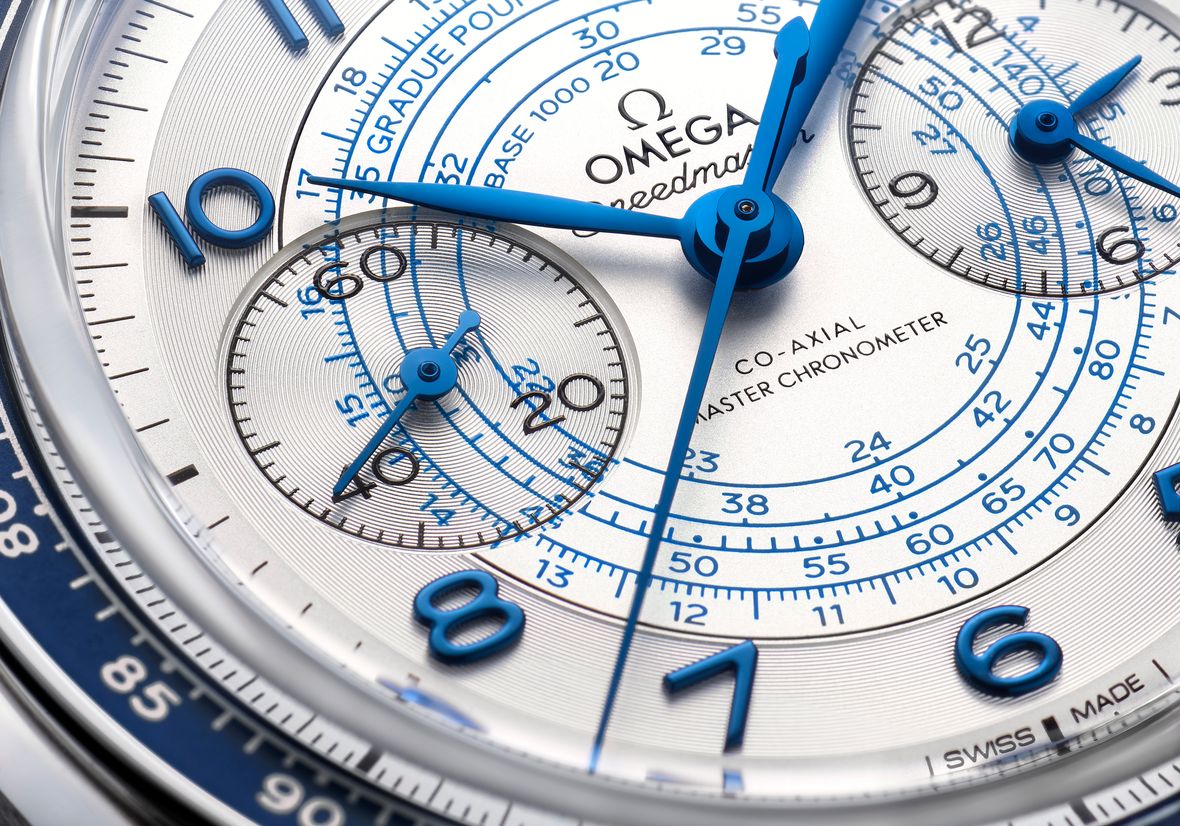