Despite some forceful pushback from staunch Panerai enthusiasts about the Luminor Due’s reduced water resistance rating, the brand is moving full force with its collection of slimmed-down and dressed up models. Panerai recently announced six new Luminor Due models, along with a new movement, to round out the lineup. 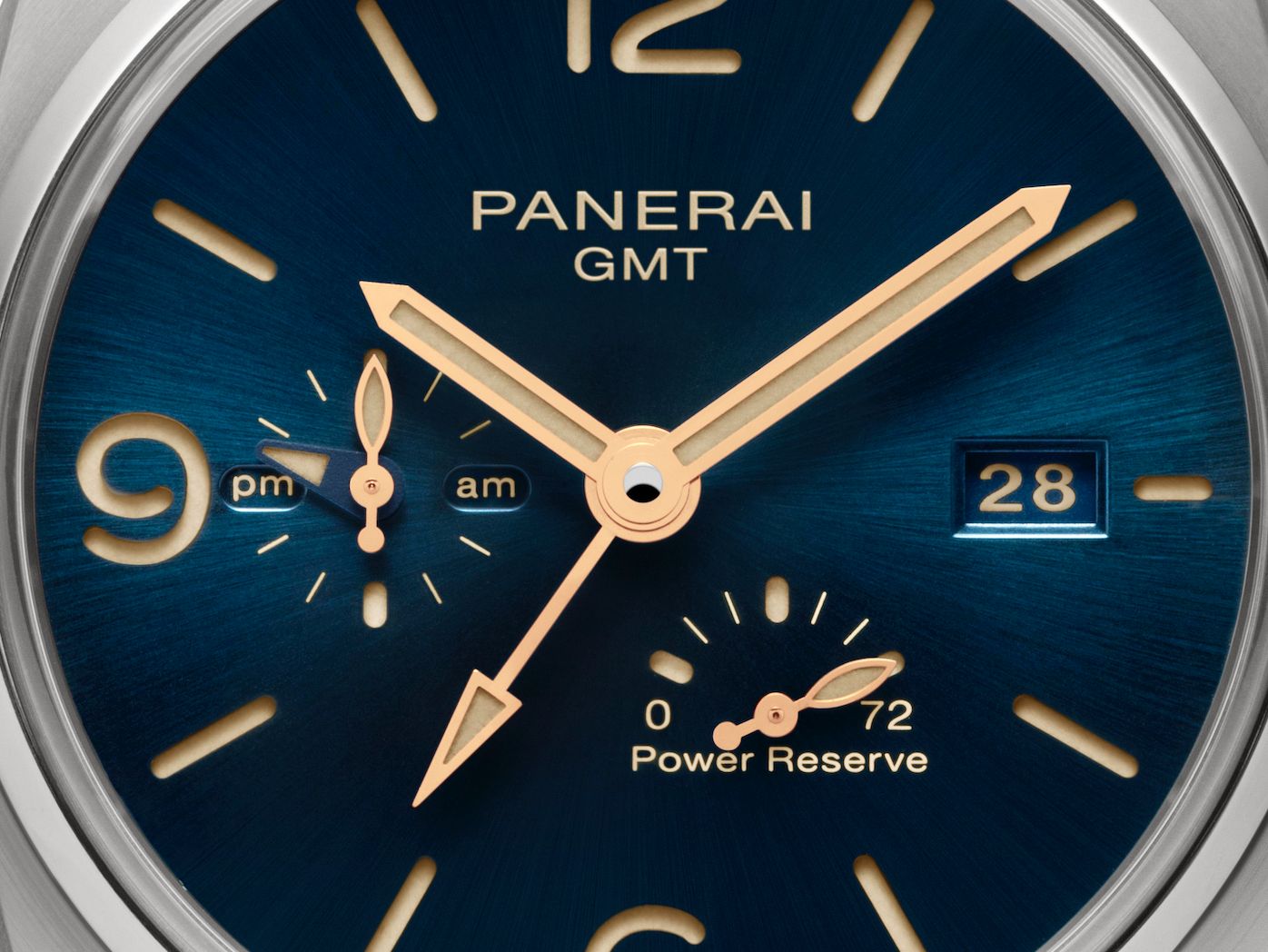 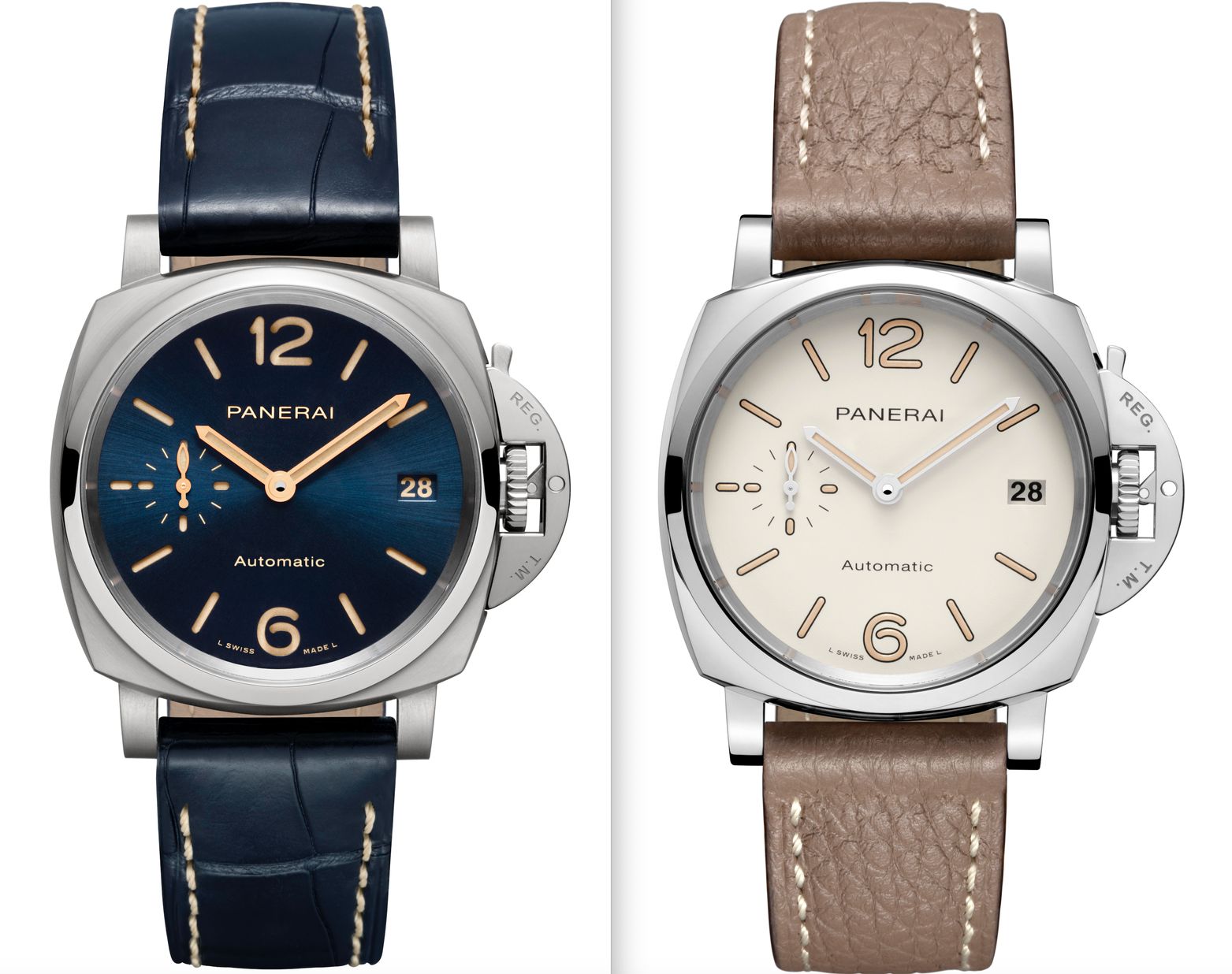 Just three years in and the Luminor Due collection already welcomes a new movement in the form of in-house Caliber P.900. Measuring a slender 4.2mm in profile, the automatic Caliber P.900 is one of Panerai’s thinnest movements to date.

The new movement supplies the watches with a 72-hour power reserve and offers center hour and minute hands, a running seconds sub-dial, and a date window. While it has not been officially announced, it would not be surprising if the manufacture Caliber P.900 will eventually replace the current Caliber OP XXXIV – a Richemont “group movement” – across all time/date Panerai Luminor Due models. 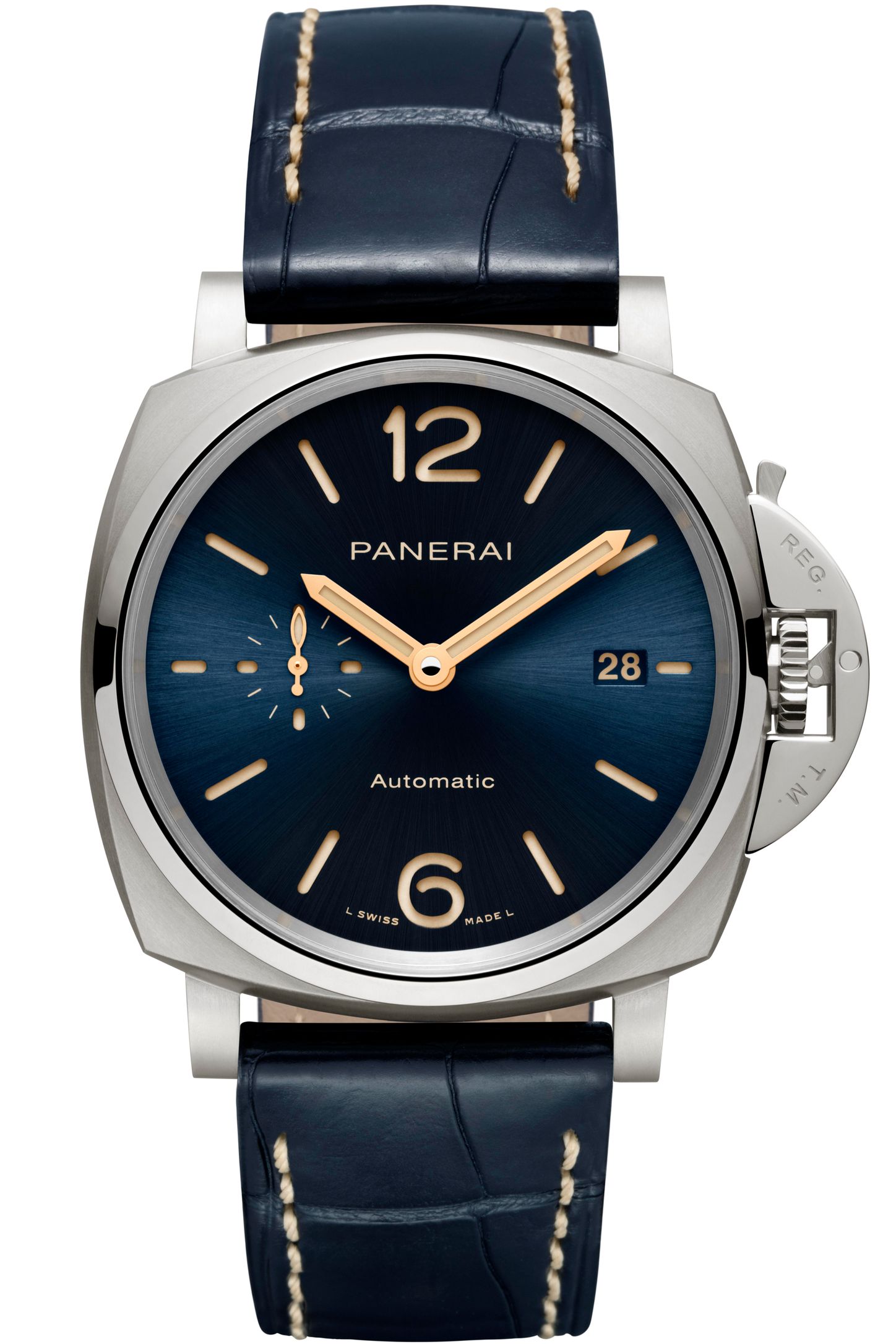 PAM00926 has a 38mm case while PAM00927 features a 42mm one. The pair includes the popular Panerai “sandwich dial” construction with recessed indices filled with beige colored Super-LumiNova that emits a green glow. The watches are fitted with titanium casebacks to protect the new Caliber P.900 inside, and like all Luminor Due models, water-resistance tops out at 30 meters. 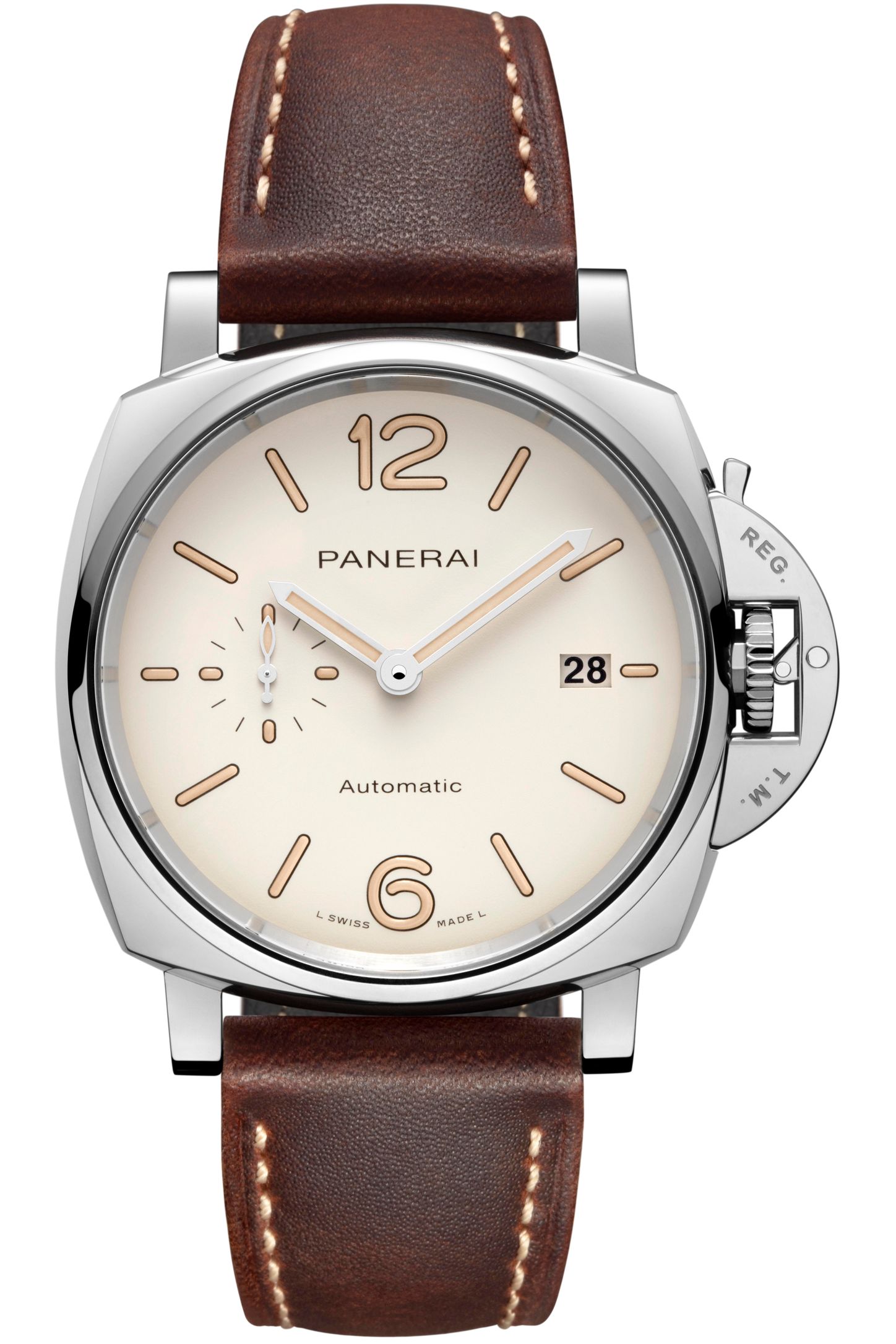 Next, we turn our attention to the new Panerai Luminor Due PAM01043 and PAM01046 models with polished stainless steel cases and white dials. Although the dials feature the same time/running seconds/date layout as the previously mentioned titanium models, rather than the sandwich dial, PAM01043 and PAM01046 have the so-called “sausage dial” that is characterized by painted luminous indexes that protrude above the dial surface. The beige colored Super-LumiNova indexes are further emphasized by black outlines.

The 38mm PAM01043 comes fitted with a taupe leather strap while the 42mm PAM01046 comes with a dark brown leather strap. However, since all six of these new Panerai Luminor Due models feature the practical quick-release system, strap switching is as easy as Uno, Due, Tre. A solid stainless steel caseback sits above the Caliber P.900 encased inside.

The New Panerai Luminor Due GMT 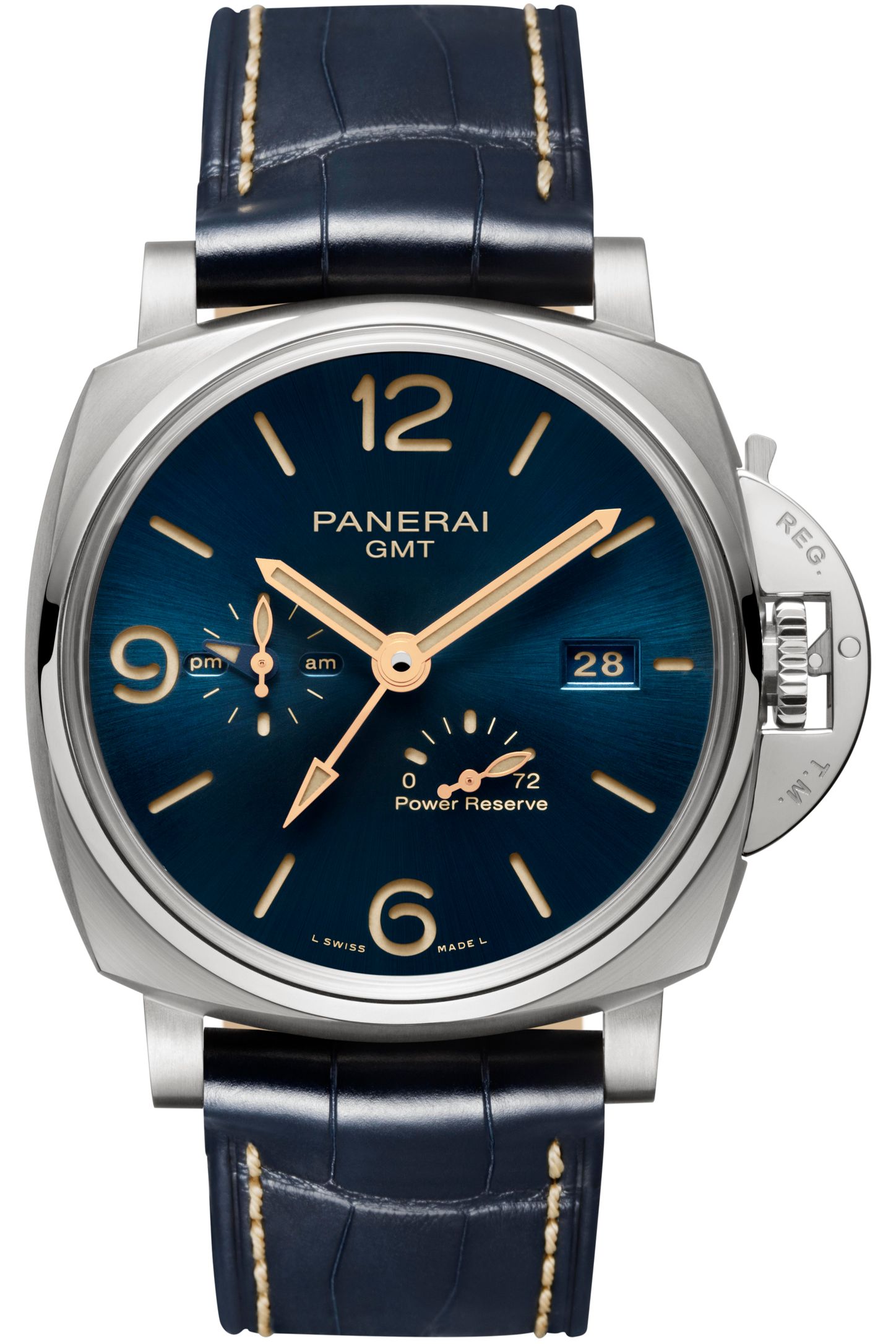 Coming in at 45mm in diameter, the PAM00964 in is not only bigger than the rest of the new Panerai Luminor Due models, but also more complicated. As its name suggests, the Panerai Luminor Due GMT is a dual time edition furnished with a 24-hour hand. Furthermore, the blue sunburst dial is also home to an A.M./P.M. indicator, a power reserve display, and a date window.

To power all these complications, Panerai equipped the PAM00964 with the in-house automatic Caliber P.4002, visible via a sapphire caseback. To retain its slim profile, Caliber P.4002 has an off-center micro-rotor while still able to provide the watch with 72 hours of power at full charge. Despite its large size, the new Panerai Luminor Due GMT PAM00964 is lightweight thanks to its titanium case construction.

The New Panerai Luminor Due Goldtech 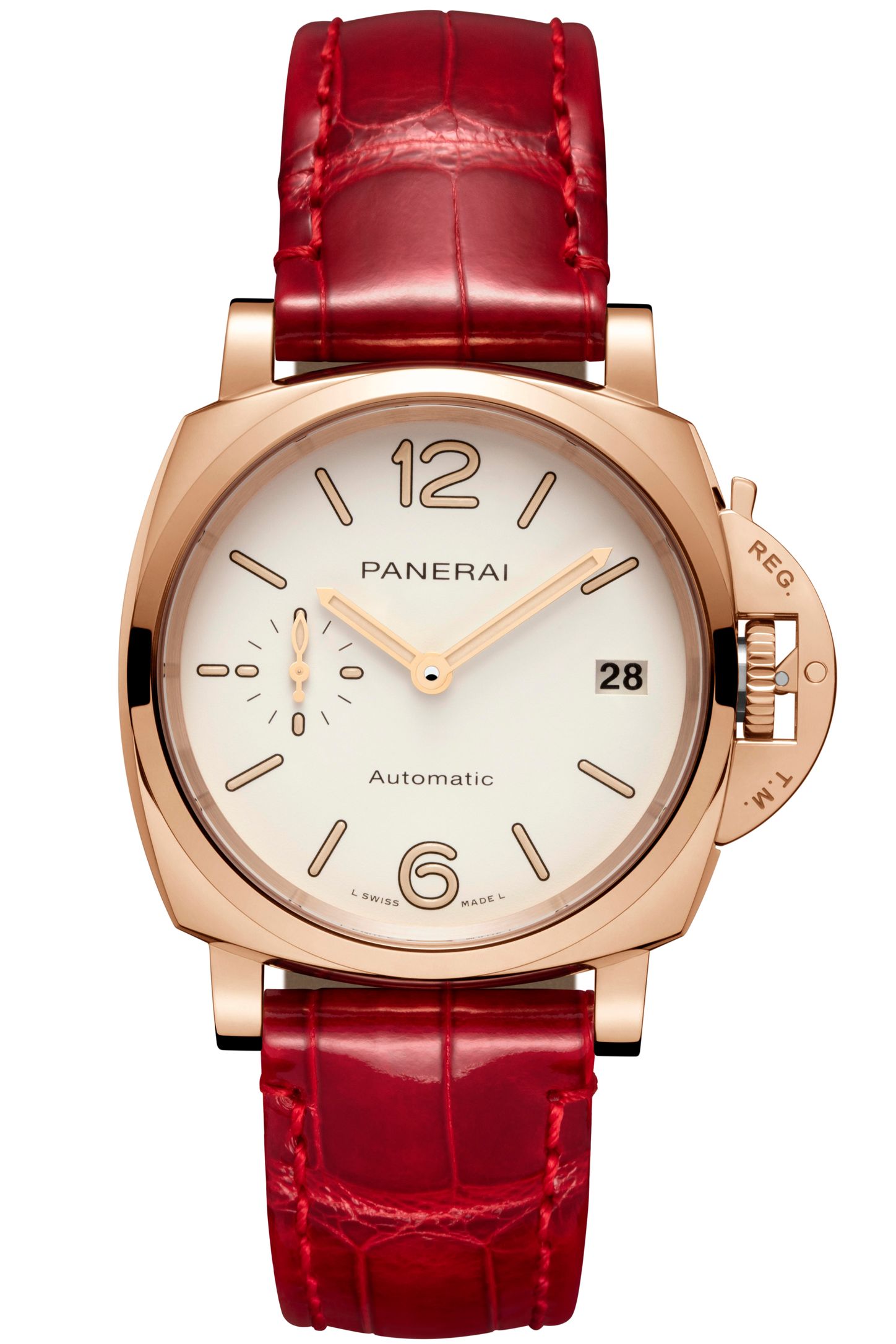 A luxurious and feminine take on the Luminor Due model, the PAM01045 flaunts a 38mm case fashioned from Goldtech – Panerai’s proprietary 18k red gold alloy that is mixed with touches of copper to achieve a warm hue and small amounts of platinum for better resistance to tarnishing.

Contrasting with the gold case is the same white dial with painted beige Super-LumiNova like the steel models detailed above, but with gold hands instead. Furthermore, rather than a solid caseback, the Goldtech Luminor Due includes a sapphire window for a view of Caliber P.900. Finishing off the look of the PAM01045 is a striking red leather strap.

It’s evident that the Luminor Due is now one of Panerai’s core collections, sitting proudly alongside the Luminor, Radiomir, and Submersible. And although it doesn’t boast the same dive-ready water resistance as other Panerai watches, that shouldn’t be much of an issue since the Luminor Due is clearly more soirée than submarine.

*All images courtesy of Officine Panerai