Not to be outdone by the likes of Omega and the #speedytuesday initiatives, Panerai is jumping on the internet bandwagon. Panerai came with a new e-commerce micro-edition of its legendary Luminor Submersible. Limited to 100 examples of the watch, Panerai’s very first foray into special e-commerce pieces will be available at $7,200 each. The Luminor Submersible Automatic Acciaio – 44mm (PAM00731) will be available exclusively at Panerai.com. 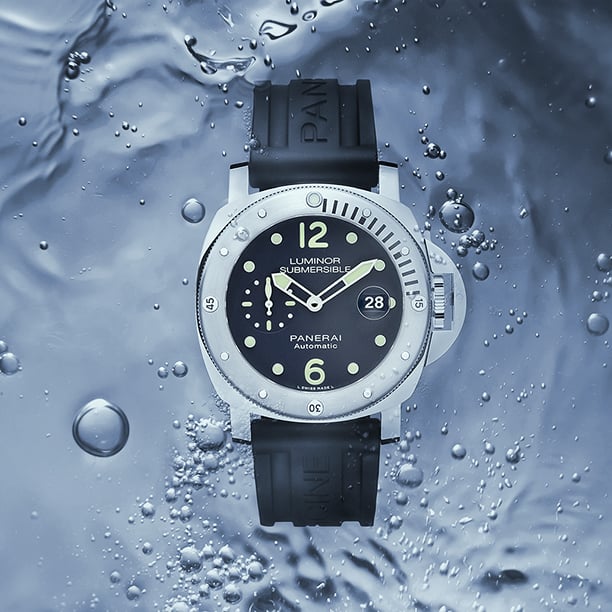 The Micro-Version of the legendary watch still comes out to a 44mm case size. (Credit: Panerai)

The professional diver’s watch by Panerai is water-resistant to a depth of 300 meters (about 1,000 ft.), with a 44 mm Luminor case made of AISI 316L stainless steel and a unidirectional rotating bezel for calculating the time of immersion. The bezel distinguishes the Luminor Submersible from every other Luminor and is a point of contention with Panerai collectors – you either love it or hate it. 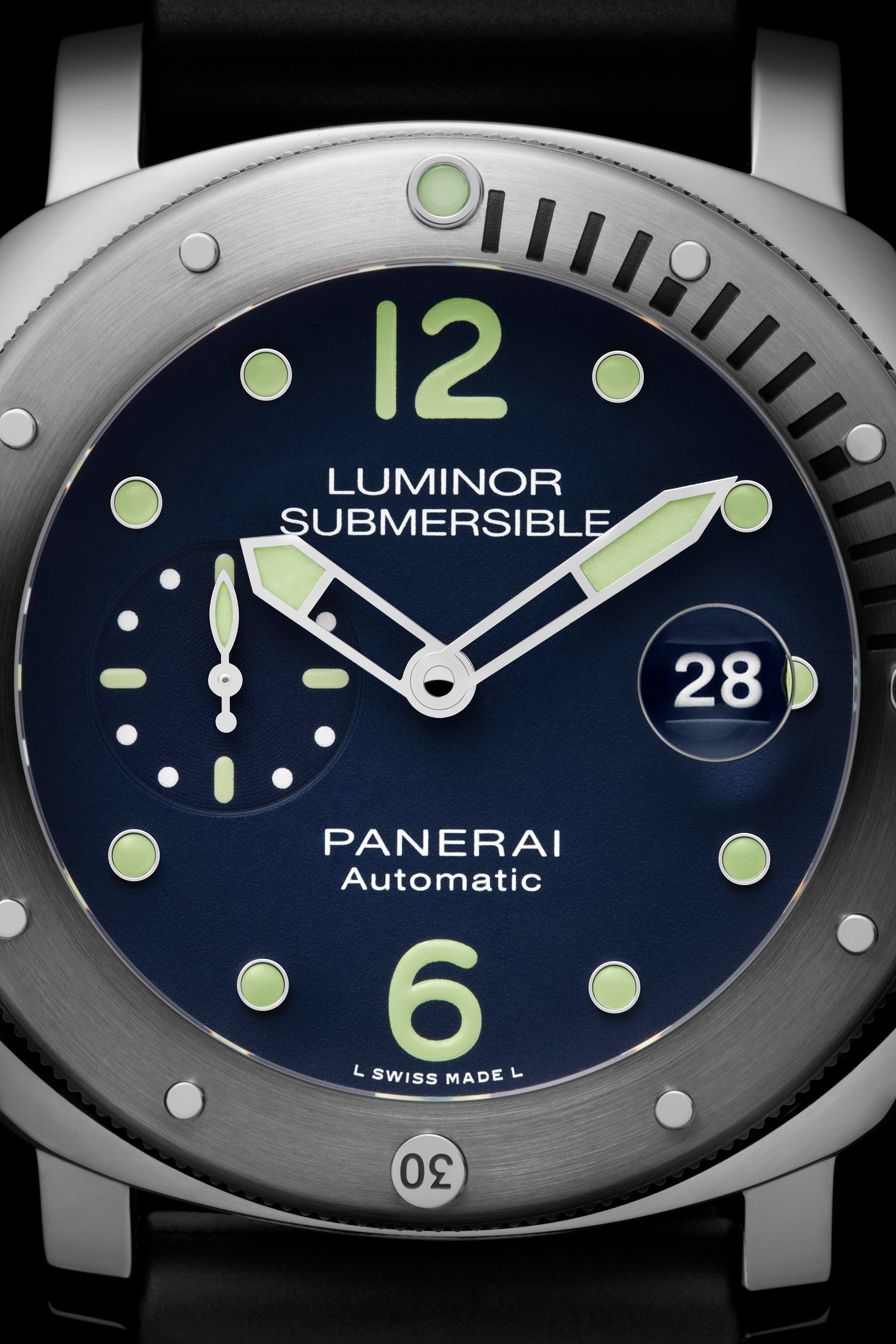 A Few Details About the Panerai Luminor Submersible

The classic Panerai black rubber dive strap can be easily switched out for the leather strap which comes with the watch. The dial of the watch is an intense blue, with the date beneath the lens at 3 o’clock and the small seconds dial at 9 o’clock. Green Super- LumiNova on the markers and hands readings possible under all lighting conditions and under water like the very legible California Panerai Radiomir PAM448. The watch is powered by the OP XXX automatic calibre, developed by Panerai’s world-class watchmaking Manufacture in Neuchâtel, with a power reserve of 50 hours. The Luminor Submersible has an interesting history; the design originated with an order for watches from the Egyptian navy in the early 1950s. It featured an enlarged case, 8-day movement and a rotating bezel with reference markers. 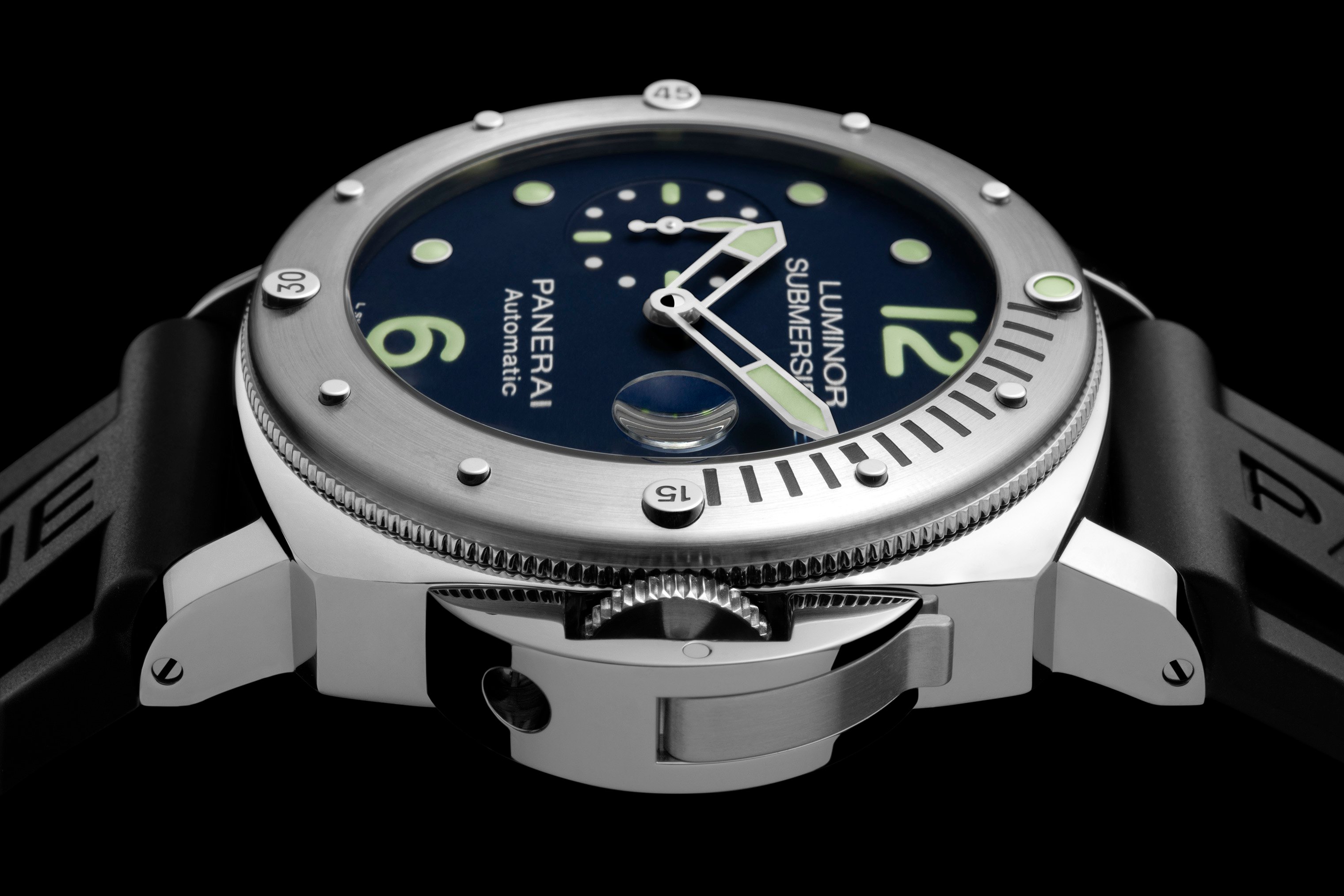 The now iconic model would later become known as the L’Egiziano. In 2015 Christie’s auctioned an original example manufactured in 1956 for $149,000. The watch was an astounding 58mm in size, the largest Panerai ever produced, and featured a new Angelus movement which Panerai then employed in other designs. Only about 50 pieces were ever produced. It was also a Lumnor Submersible that first caught the eye of Sylvester Stallone in the 1990s. The brand became famous after he bought it and wore it in an action flick. Panerai has made Submersibles in gold and titanium, but the steel version is considered the one to be used for actual diving. What do you plan to do with your Panerai?