Perhaps to remind us that they do indeed make highly-functional dive watches, and not just fashionable luxury timepieces that are inspired by vintage dive watches, Panerai has declared 2019 to be the year of the Submersible (note the exclusion of the once accompanying “Luminor” label that was previously part of the collection’s name). If you have been thinking about buying a Panerai Submersible, but have not found the right one just yet, then this year’s new releases may very well be for you. There’s plenty to unpack here, so let’s jump right into some of the new Panerai Submersible releases of SIHH 2019. 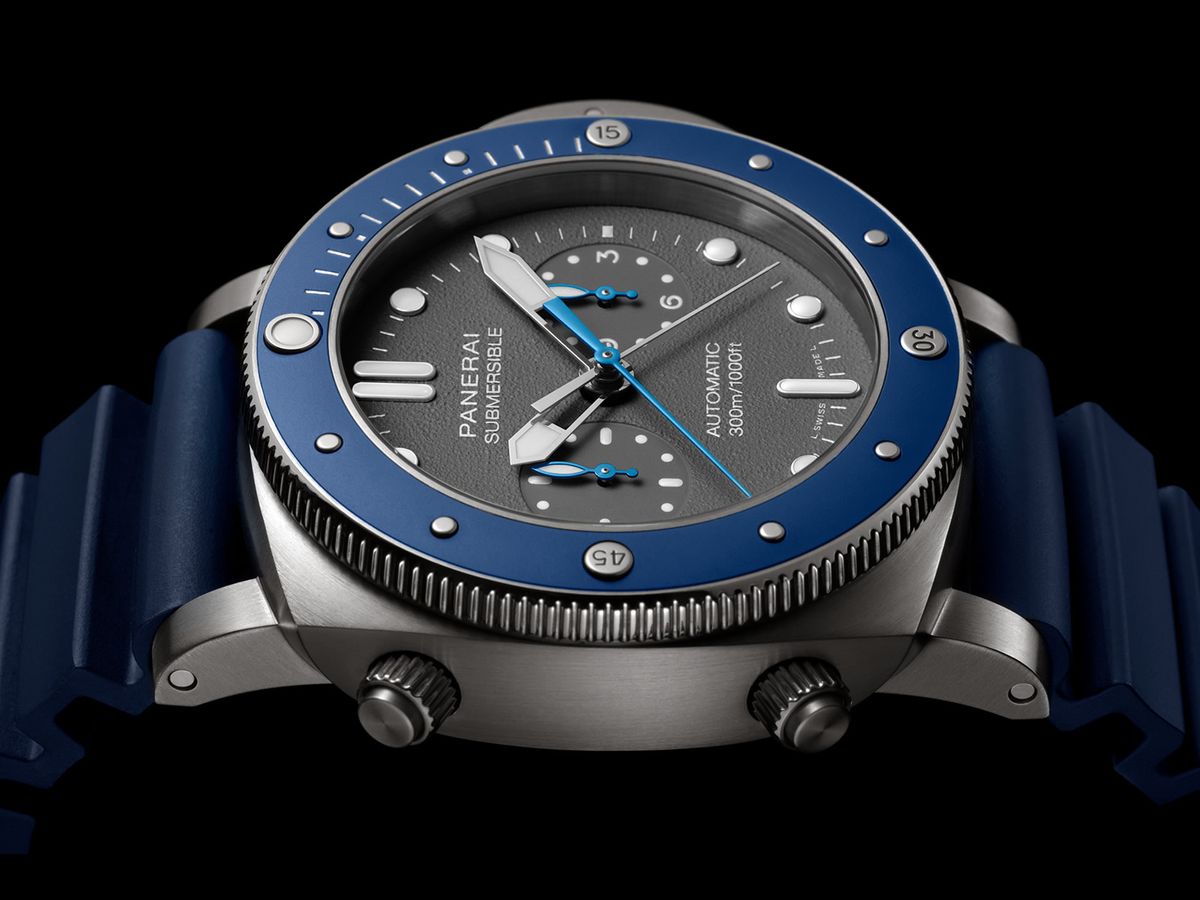 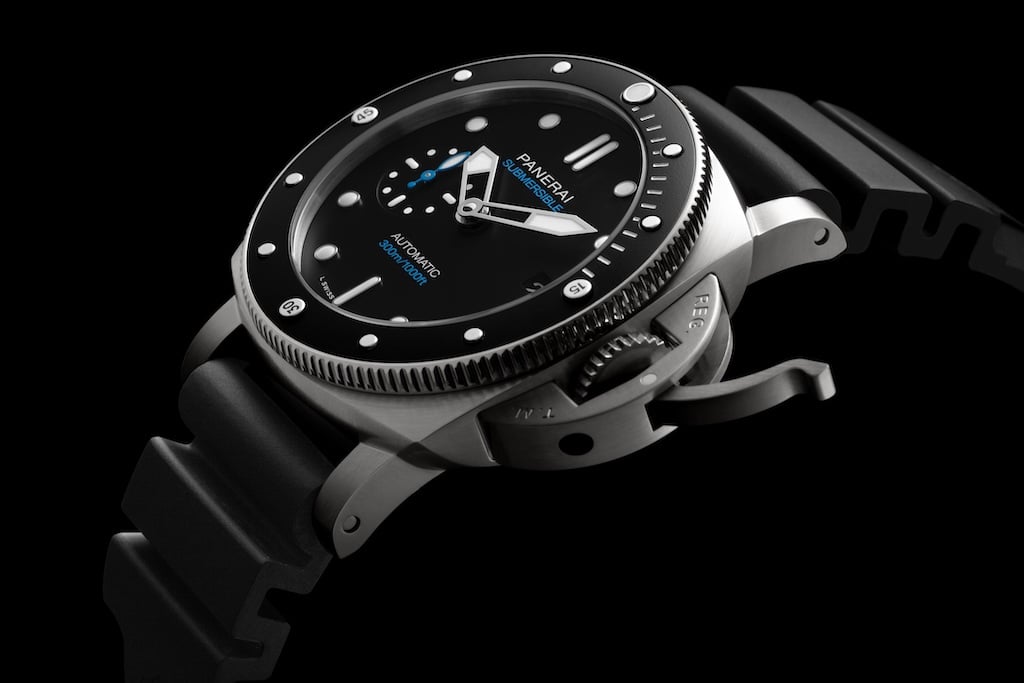 The first batch of new Panerai models comes in the form of the Submersible 42. With a 42mm stainless steel case, this is the size that will fit most wrists – even with Panerai’s trademark bridge-style crown guard protruding from its case. There are two versions to choose from: PAM00683 – which has a black ceramic bezel, black dial, and black rubber strap; and PAM00959 – which gets fitted with a blue ceramic bezel, gray dial, and a blue rubber strap. 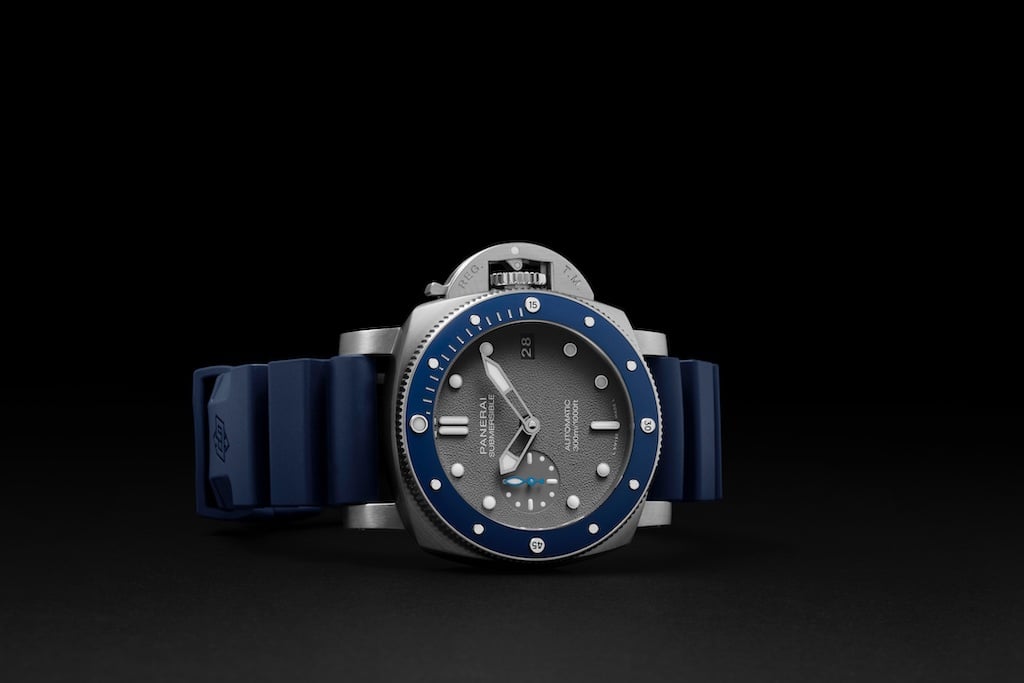 On these watches we see the characteristic oversized hour and minute hands, along with a constant seconds indicator at 9 o’clock, and date window at the 3 o’clock location. Naturally, as dive watches, there’s plenty of lume on their dials and hands to aid with underwater visibility, and they have both been given a 300-meter water resistance rating. Powered by the automatic Caliber OP XXXIV, the new Panerai Submersible 42 watches offer users a 70-hour power reserve. 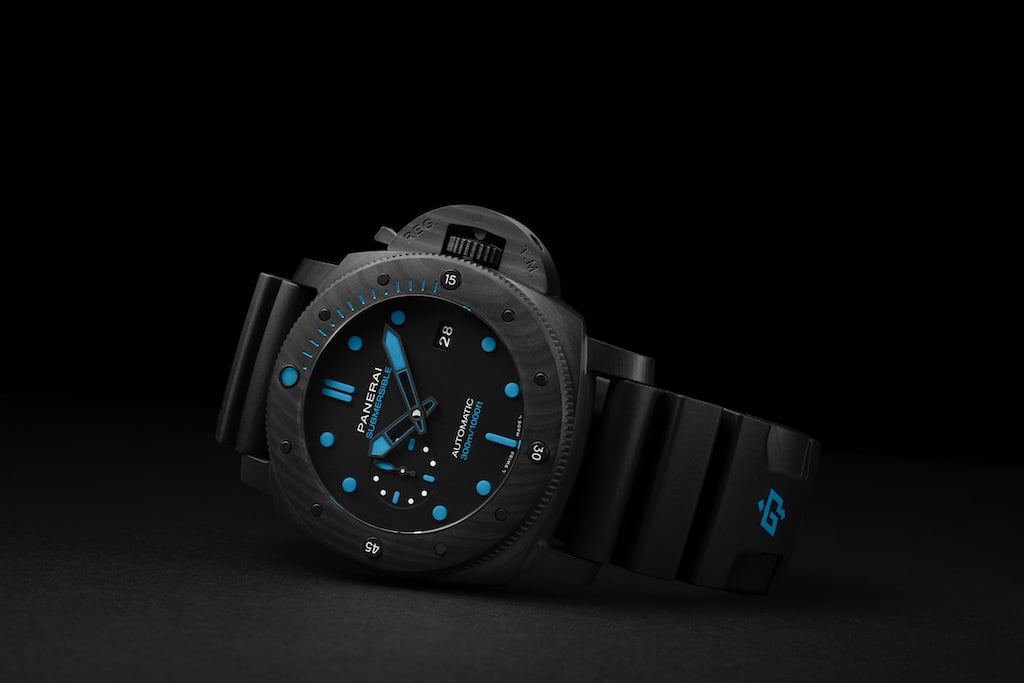 Next in line are two new Submersible Carbotech watches. Launched in 2015, Carbotech is Panerai’s proprietary carbon fiber based material that not only flaunts a distinct pattern throughout its black surface, but also has the benefits of being ultra-lightweight, shock resistant, and anti-corrosive. 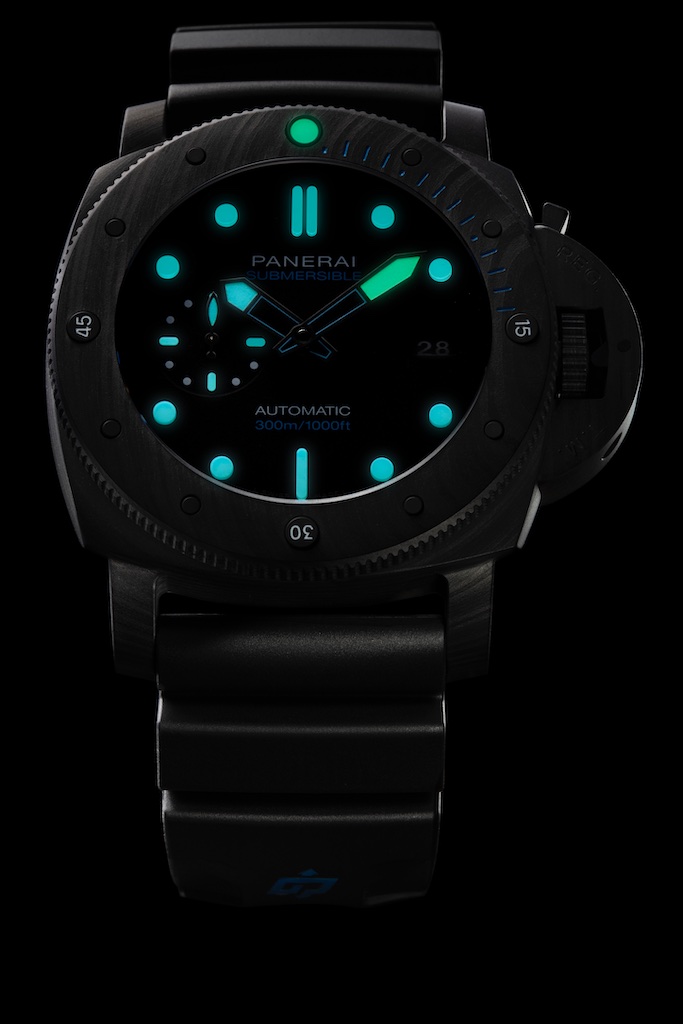 The duo of Submersible Carbotech watches includes PAM00960 with a 42mm case, and PAM01616, which has a 47mm case. While both versions have a similar visual aesthetic and offer identical functionality, the two watches run on different movements. PAM01616 is fitted with the in-house Caliber P. 9010 movement, while the smaller PAM00960 receives Panerai’s Caliber OP XXXIV movement. Despite their different names and sizes, both movements are self-winding, and offer users a 72-hour power reserve. 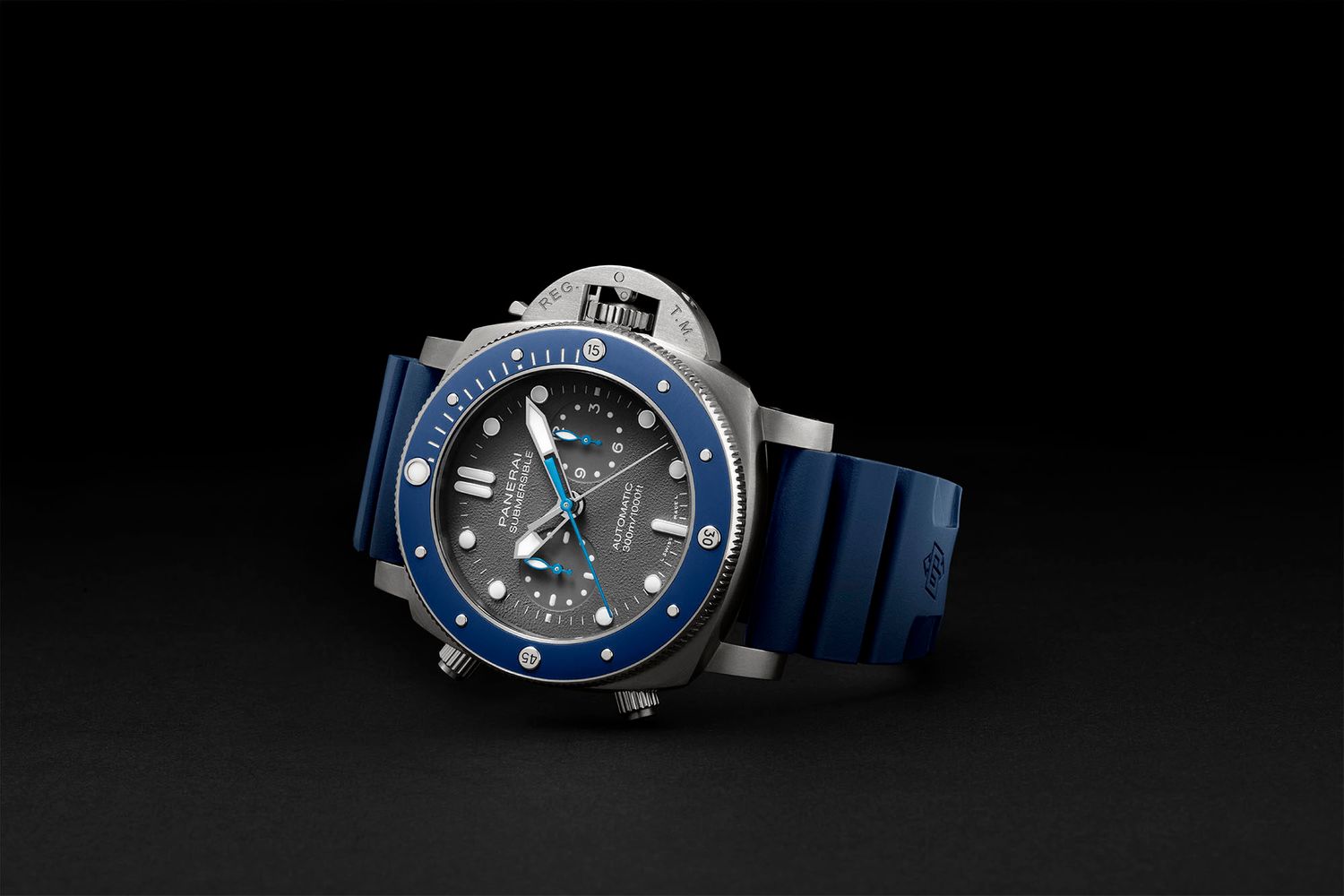 We’ve all seen the inspirational Instagram captions that encourage us to spend our money on experiences rather than things. The good news is that Panerai is now offering exclusive experiences with the purchase of select watches presented at SIHH 2019. Take the limited-edition Panerai Submersible Chrono Guillaume Néry Edition PAM00983 for example, which offers 15 buyers the opportunity to dive in the ocean among whales with French freediving champion, Guillaume Néry. The watch itself sports a 47mm black DLC-coated titanium case, a black ceramic bezel, and a greenish blue dial that is slightly reminiscent of seawater. 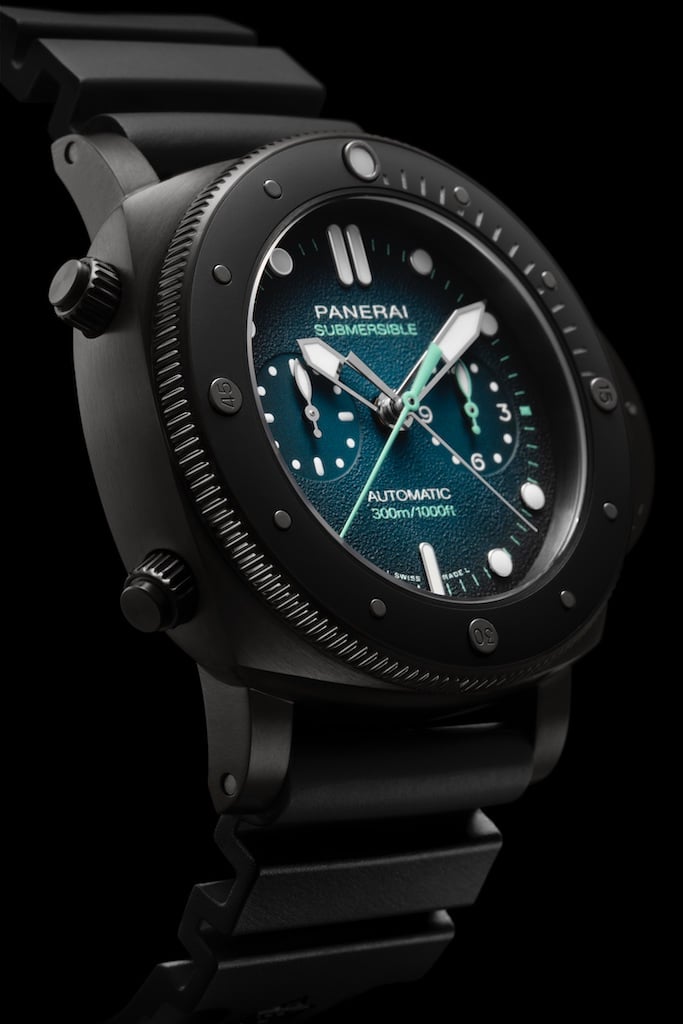 If you’d rather forgo the diving experience but still want the watch, then there’s the Submersible Chrono Guillaume Néry Edition PAM00982, which has a 47mm titanium case, blue ceramic bezel, and a gray dial. Both editions run on the in-house Caliber P.9100 automatic flyback chronograph movement and boast a 72 hour power reserve. 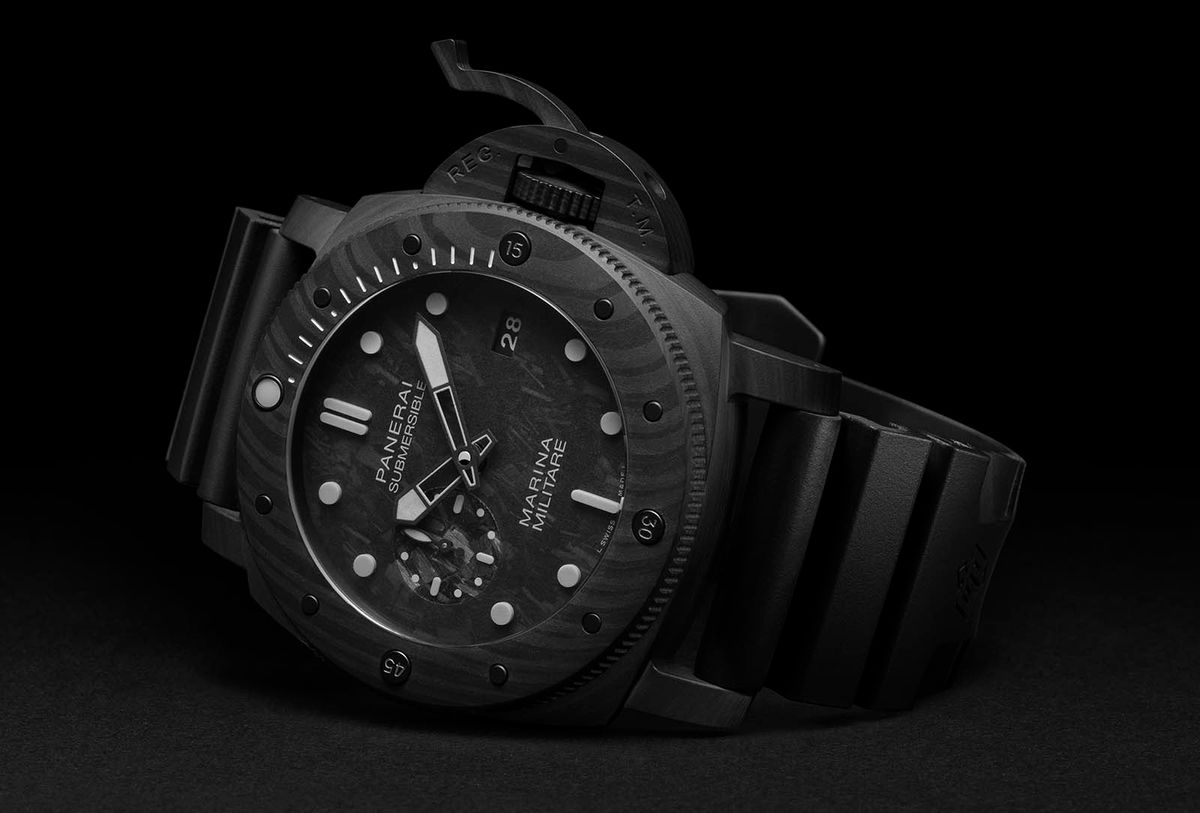 If an exclusive diving experience is not of interest to you, and you’d rather have the opportunity to take part in two days of training with the Commandos of the Italian Navy (COMSUBIN), then Panerai can make that happen too – with the purchase of the Submersible Carbotech Marina Militare PAM00961. Limited to just 33 pieces, the PAM00961 features a 47mm Carbotech case, a Carbotech-pattern dial with green accents, and a matching green rubber strap. 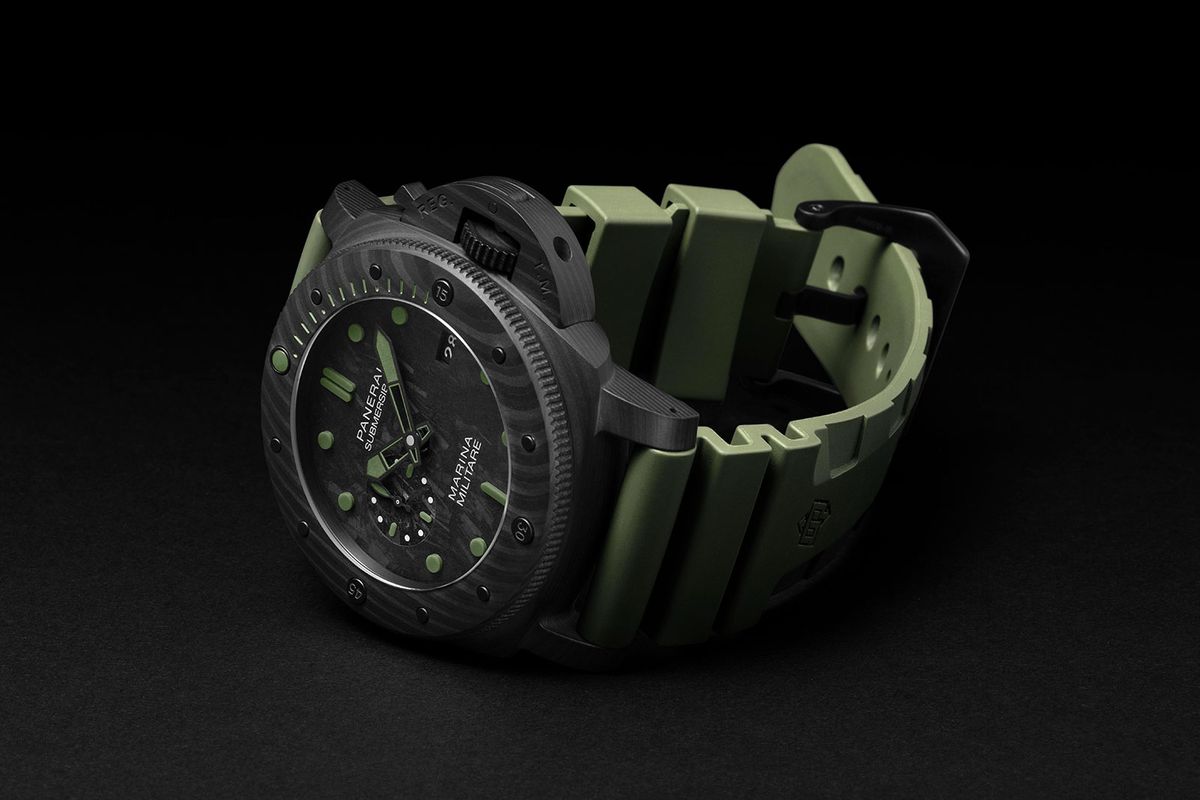 The standard version of the Submersible Carbotech Marina Militare – which does not include the two-day stint in the Italian Navy – is the PAM00979, and it features a 47mm Carbotech case, a Carbotech-pattern dial with white details, and a black rubber strap. Both editions run on the in-house Caliber P. 9010 movement, and offer users a 72-hour power reserve. Not that Panerai would ever let us forget it, but these new Marina Militare watches are intended to highlight the company’s past as an official supplier to the Italian Royal Navy. 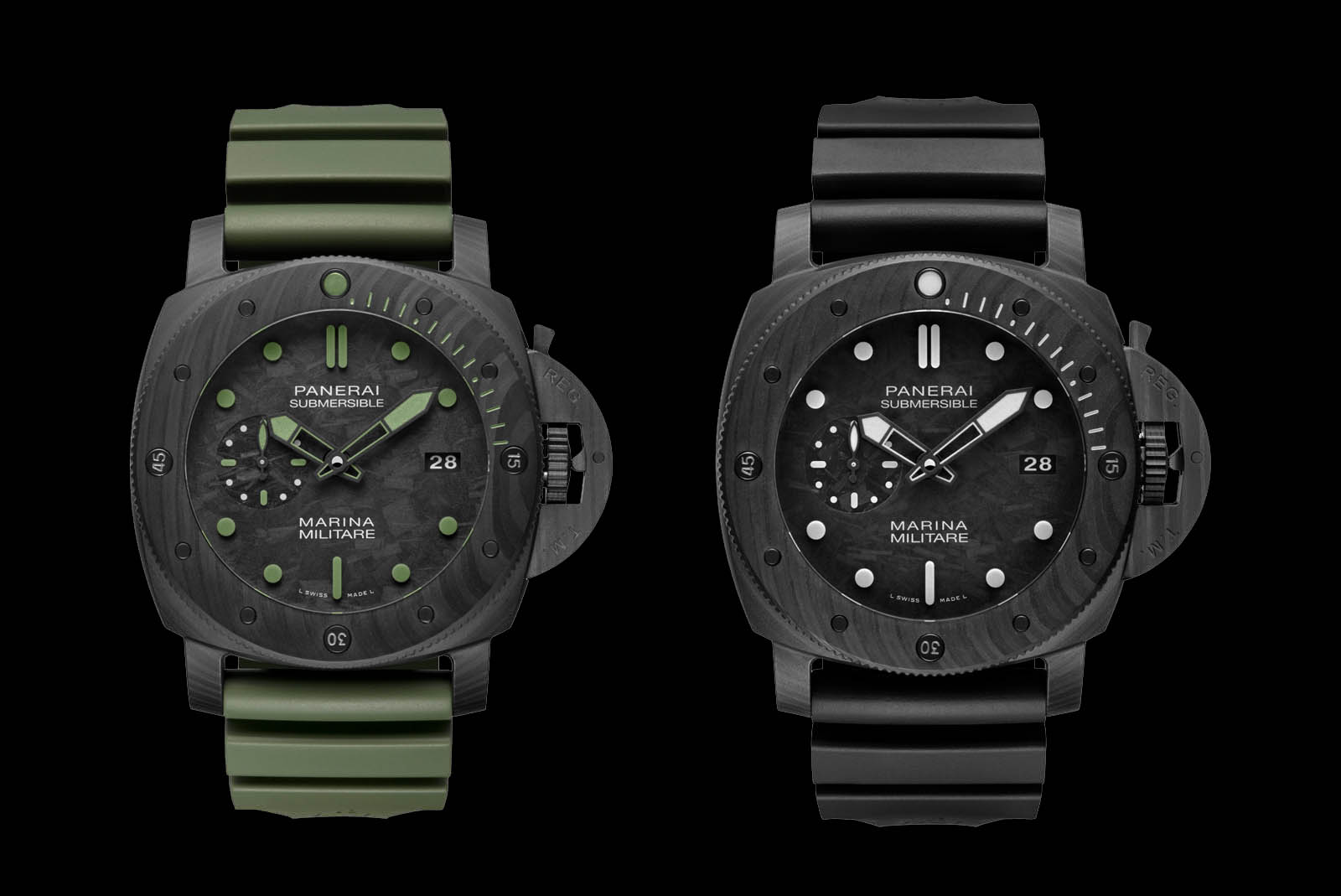 The green version of the Panerai Submersible Carbotech Marina Militare comes with a two-day training course with the Italian Navy (Image: Panerai).