Reliability and precision are values associated directly with Omega watches. The company, founded in 1848, sponsors a number of sports, not to mention becoming the Official Timekeeper for the Olympics in 1932 and the first watch worn on the moon in 1969. From space to the big blue, Omega has been manufacturing wristwatches to the highest watchmaking standards within the industry, creating styles that are coveted the world over by aspiring brands. The Omega Speedmaster collection is home to a number of different sub-categories, each one with its own style. However, regardless of the specific model or configuration, the Speedmaster deserves a spot in every connoisseur’s watch box.

Building any collection takes a certain amount of patience and there’s no right or wrong answer in how to gradually grow one – just like there are no hard and fast rules regarding how many different styles of watches a man should own. The various different styles of the Omega Speedmaster demonstrate the collection’s adaptability and the brand’s diverse approach to watchmaking. Here is a quick and handy style guide that highlights the key features for a few of the most noteworthy Speedmaster sub-collections. 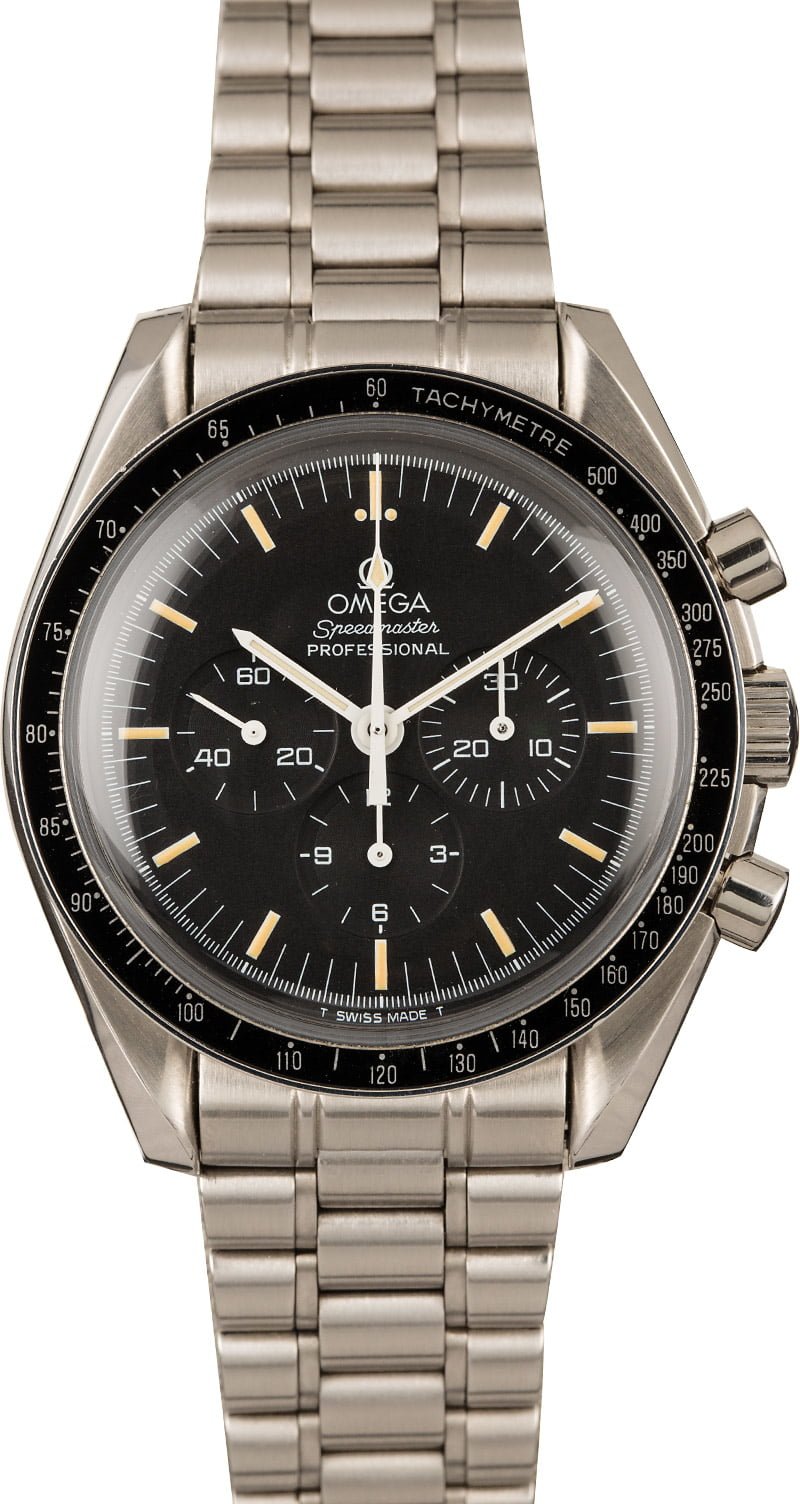 The Omega Speedmaster was the first watch to ever land on the moon, yet this achievement does not define the watch entirely. In fact, before its trip to outer space, the models from this iconic collection were geared more towards the needs of professional racing drivers, hence there is still an Omega Speedmaster Racing watch collection devoted to Omega’s long-standing relationship with the motorsports industry. The Speedmaster Professional Moonwatch collection now includes quartz watches, manual chronographs, analog displays, limited edition timepieces, digital displays and cutting edge Master Co-Axial automatic chronometers.

The famous Omega Speedmaster Professional Moonwatch features a 42mm stainless steel case, housing a manual-winding integrated chronograph movement at its center. Its style is perfectly tailored towards those with a taste for vintage watches since the modern examples produced by Omega are incredibly close to the original models created almost 50 years ago. Still to this day, Omega produces a timepiece that is flight-qualified by NASA for spaceflight and EVA. High contrast white hands stand out against a matte black dial, protected underneath a domed Hesalite crystal.

Designed to be highly legible, the style of the Omega Speedmaster Professional Moonwatch is defined by a black tachymeter scale on the bezel and luminous coated accents on the dial that enhance legibility in dark situations. A 30-minute recorder, 12-hour counter and small running seconds scale occupy the sub-dials of this iconic timepiece. Finishing the watch off is a supple leather strap for pairing with formal wear or a stainless steel bracelet for matching with more casual attire. 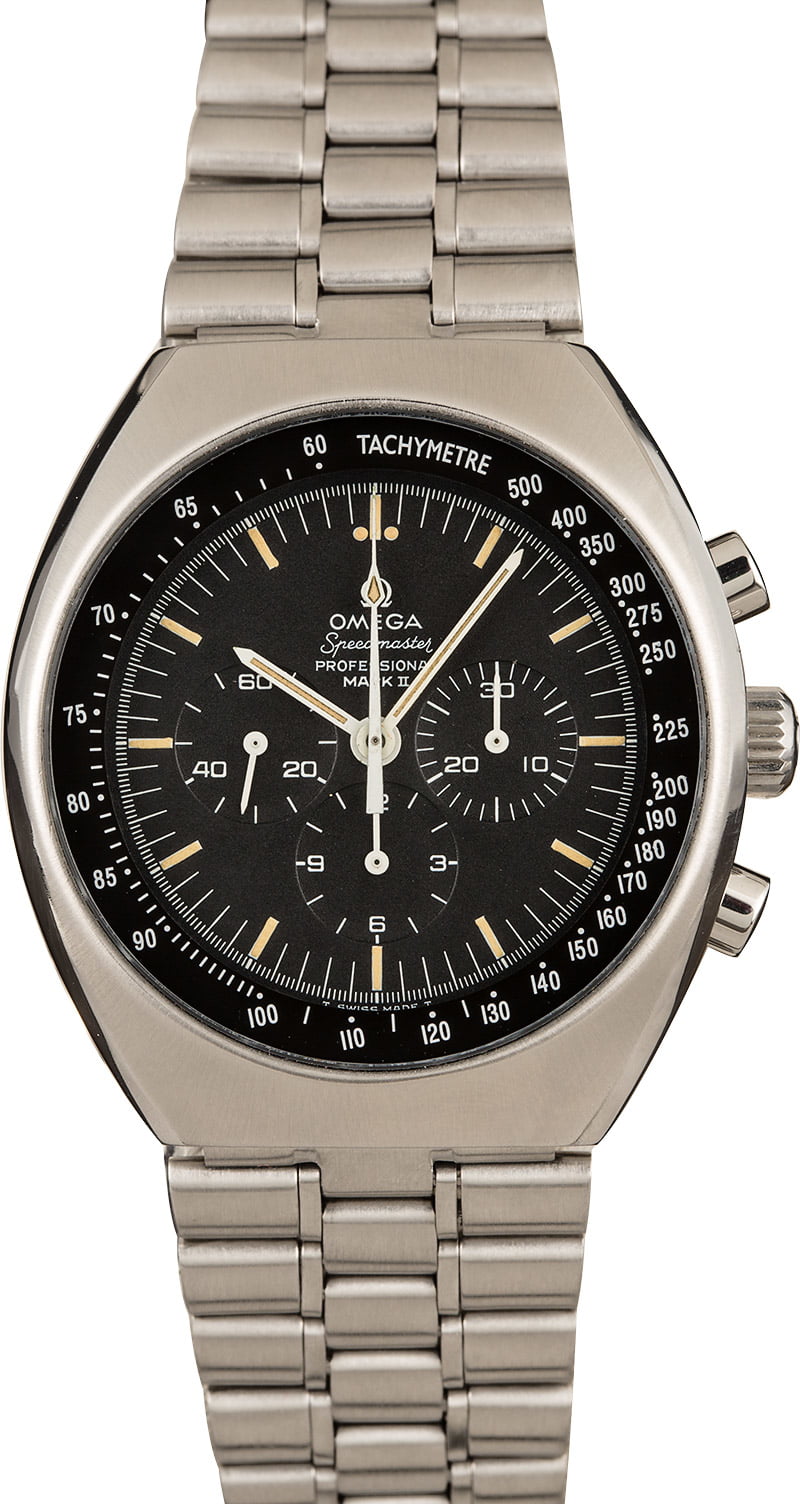 Characterized by its barrel-shaped case, the Omega Speedmaster MKII brought something innovative and eye-catching to the Speedmaster collection in 1969. This time the tachymeter scale was integrated into the underside of a flat crystal, rather than being positioned on the external bezel. Over the years, the Speedmaster MKII has grown in size. Its 41.75mm width expanded to 42.4mm after the 1970s. Carrying generally similar styling to the archetypal Speedmaster look, modern versions of the MKII run on an updated automatic winding, Co-Axial chronograph caliber that features a date complication at 6 o’clock.

A mixture of brushed finishes and polished accents are incorporated into the bracelet design of the Omega Speedmaster MKII. The barrel-shaped case is very emblematic of the 1970s, offering a unique take on the classic Speedmaster design language, albeit with an elegant edge that will allow it to be worn with professional and relaxed attire alike. Since the Speedmaster MKII has existed in both modern and vintage forms, examples can be found with different movements, case sizes, dial layouts, and colorways, making it an excellent version of the Speedmaster to collect. 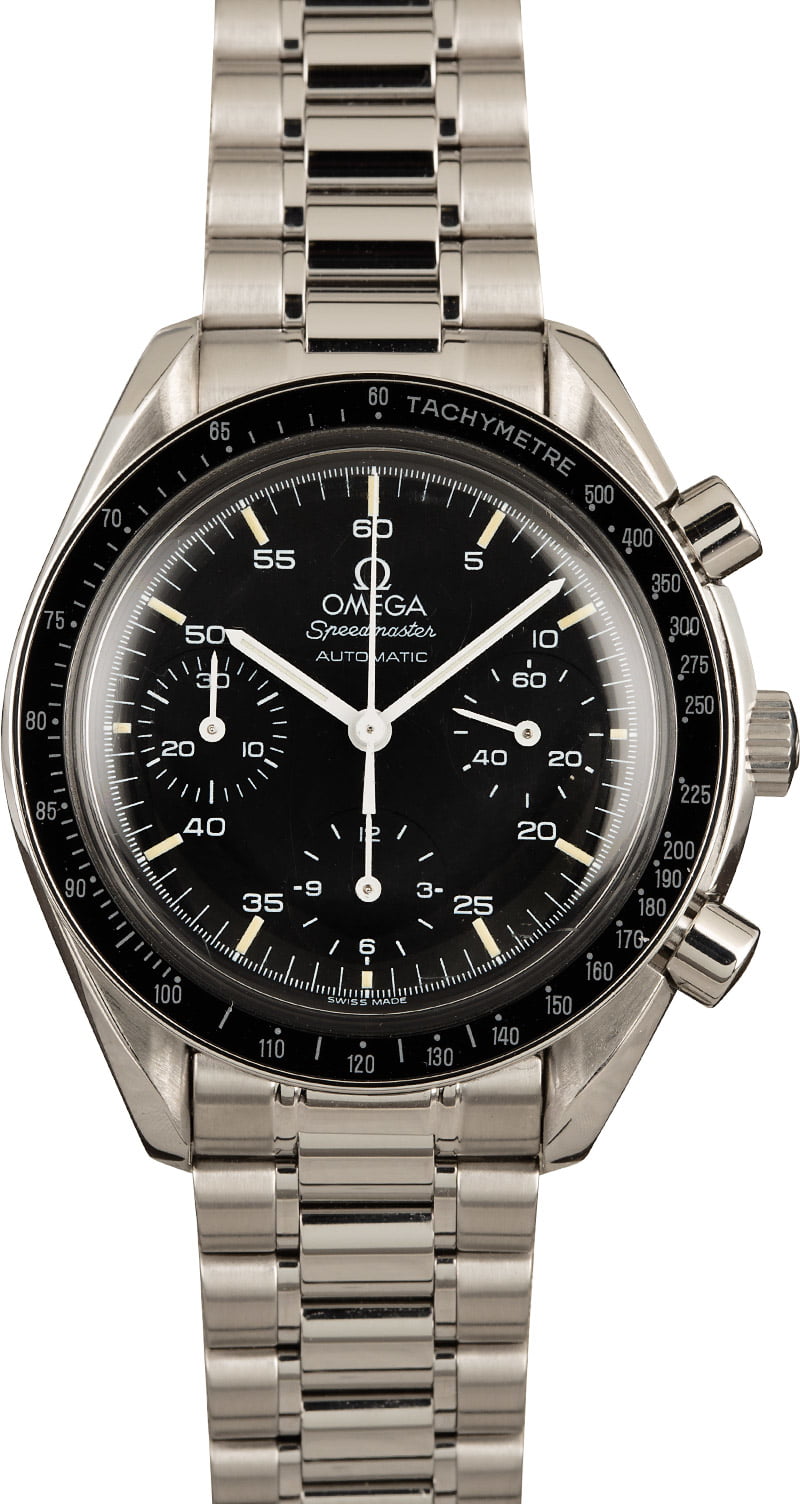 Generally speaking, the Omega Speedmaster Reduced is more affordable than most other Speedmaster models. At 39mm, the case of the watch is 3mm smaller than other Speedmaster watches, making it ideal for men with slender wrists and for ladies who like the sporty, robust look of the iconic Moonwatch. The Omega Speedmaster Reduced is powered by the Caliber 3220, a self-winding modular chr0onograph movement based on the ETA 2892. One of the defining characteristics of Speedmaster Reduced models is the placement of their sub-dials, which sit closer to the edge of the dial due to the watch having a more compact case design. The model first launched in 1988, it offered those with smaller wrists a chance to enjoy the functionality and sleek look of the Speedmaster in a more manageable and modest size.

The Omega Speedmaster Reduced was produced for roughly two decades and was available in solid yellow gold, stainless steel or a bi-color version in steel and gold. Bracelets and leather straps complete these timepieces, along with various dial colors and functions that include a moonphase, a date, a triple calendar, and even a perpetual calendar. With that in mind, the most common versions of the Speedmaster Reduced are those that adhere most closely to the design of the full-size Speedmaster Moonwatch, with no date, a black dial, and a black tachymeter bezel. 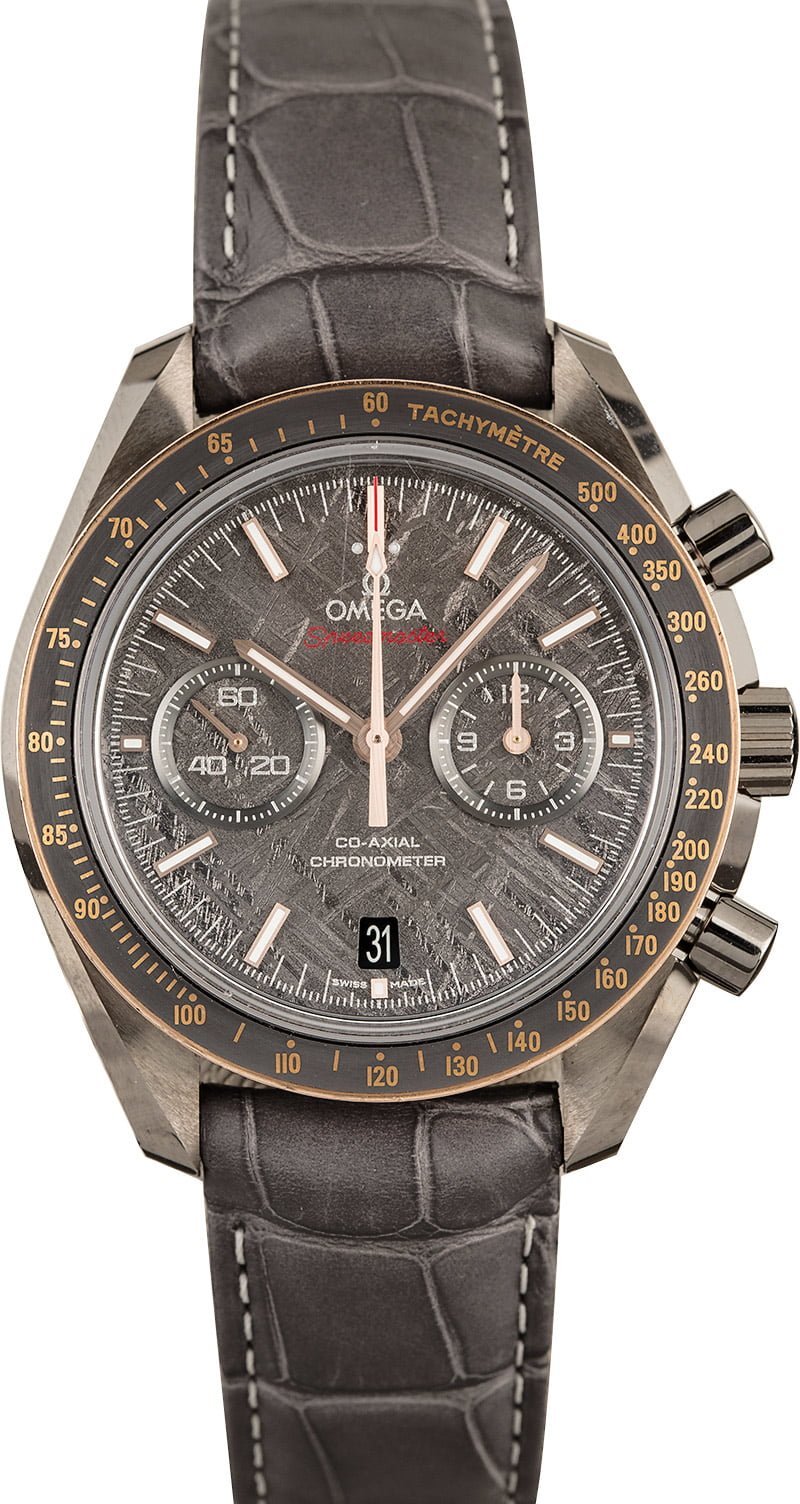 Omega Speedmaster Co-Axial Chronograph watches are slightly larger than the classic Speedmaster Professional Moonwatch, boasting a confident 44.25mm diameter as opposed to the standard 42mm. They’re also available in a number of different materials like titanium, solid gold, and colored ceramic. These models are powered by modern, self-winding movements that feature Omega’s signature Co-Axial escapement that operates via a system of three pallets that separate the locking function from the impulse. An increasing number of Omega watches now feature the Co-Axial escapement, and it is said that its design makes the movement far less reliant on lubrication that traditional Swiss-lever escapements.

Due to the use of Omega’s modern in-house Co-Axial chronograph movements, the displays of these watches feature two sub-dials at 3 and 9 o’clock, and both the hours and minutes for the chronograph are recorded by two separate hands mounted within the 9 o’clock sub-dial, while the register at 3 o’clock serves as a running seconds indicator. While the classic Speedmaster Professional boasts a traditional 3-register dial layout, a date window takes the place of the third register on the new Co-Axial chronograph Speedmaster watches.

Those who love the distinct design codes of the Speedmaster Professional Moonwatch can enjoy largely the same sporty aesthetics of the original model, with the addition of Omega’s improved cutting-edge technology. Despite a slight difference in the size and dial layout of the modern Co-Axial Speedmaster, its functionality as a sophisticated chronograph is in no way compromised by the various changes and updates. Unlike many other Speedmaster models, Omega chose to place their in-house Co-Axial movement on full display through a sapphire caseback. Additionally, while the classic Speedmaster Professional Moonwatch is available with the option of either sapphire or Hesalite for the crystal, all Co-Axial Speedmaster watches are fitted with sapphire crystals, making their appearance more in-line with their modern movements.