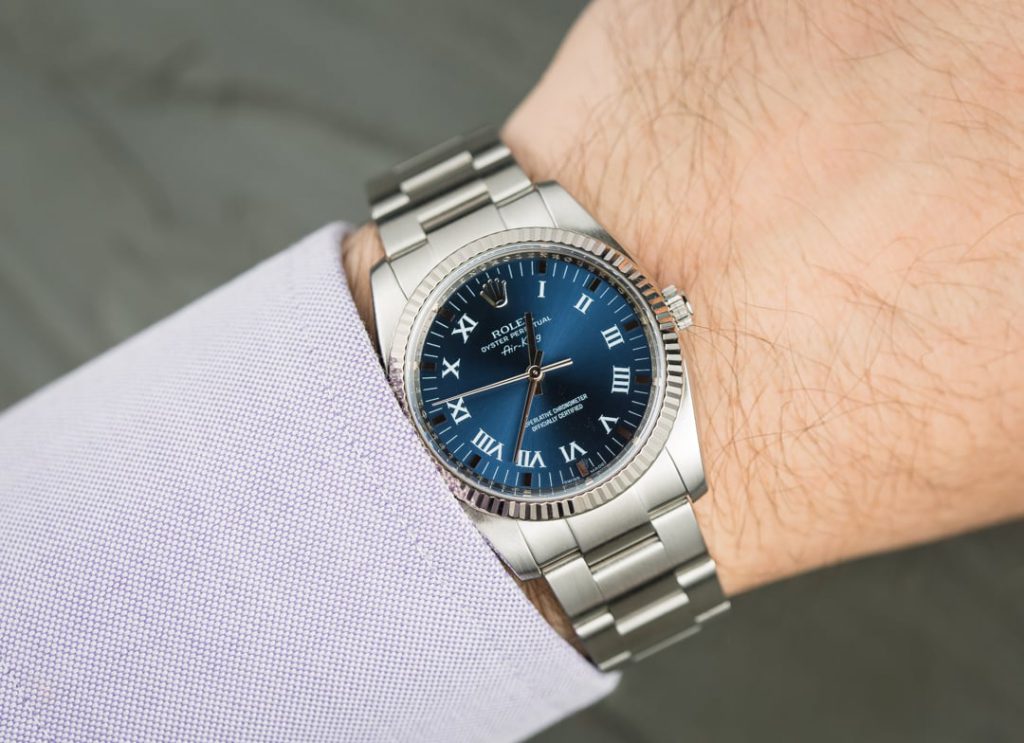 The first Rolex Air-King watch was presented in 1945 in honor of British Royal Air Force (RAF) pilots during WWII. It’s a Rolex watch collection that has enjoyed a long history with a number different models launched over the years. In fact, it’s actually one of Rolex’s oldest collections that’s still in production today. Here are four quick facts about the now discontinued Rolex Air-King ref. 114234 that you may not know. 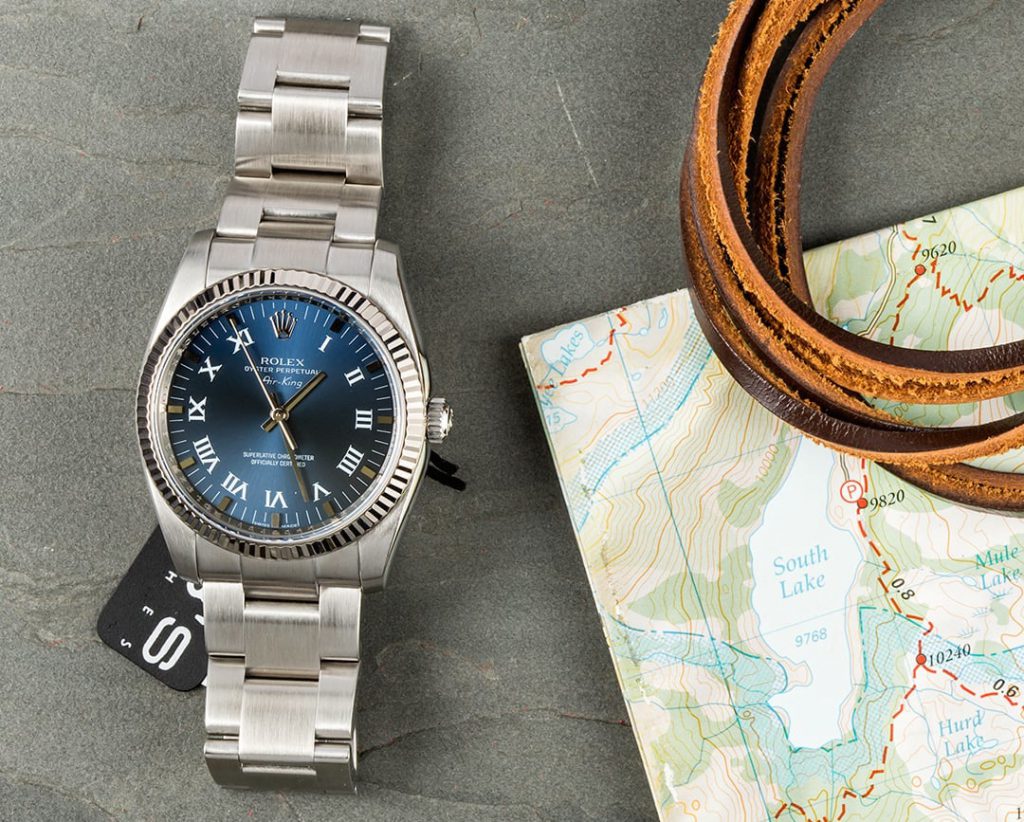 At Baselworld 2007, Rolex unveiled three new Air-King models: ref. 114200, ref. 114210, and the ref. 114234. Therefore, these six-digit models replaced the preceding 14000 series and although they retained the same 34mm size, the cases were thicker and the overall look slightly bulkier. New dial options were also offered and this particular ref. 114234 sports a distinct blue dial with white Roman numerals and “doorstop” style indexes. Furthermore, because this is a newer model that’s less than ten years old, the ref. 114234 includes the engraved “ROLEX ROLEX ROLEX” rehaut as an anti-counterfeit measure. 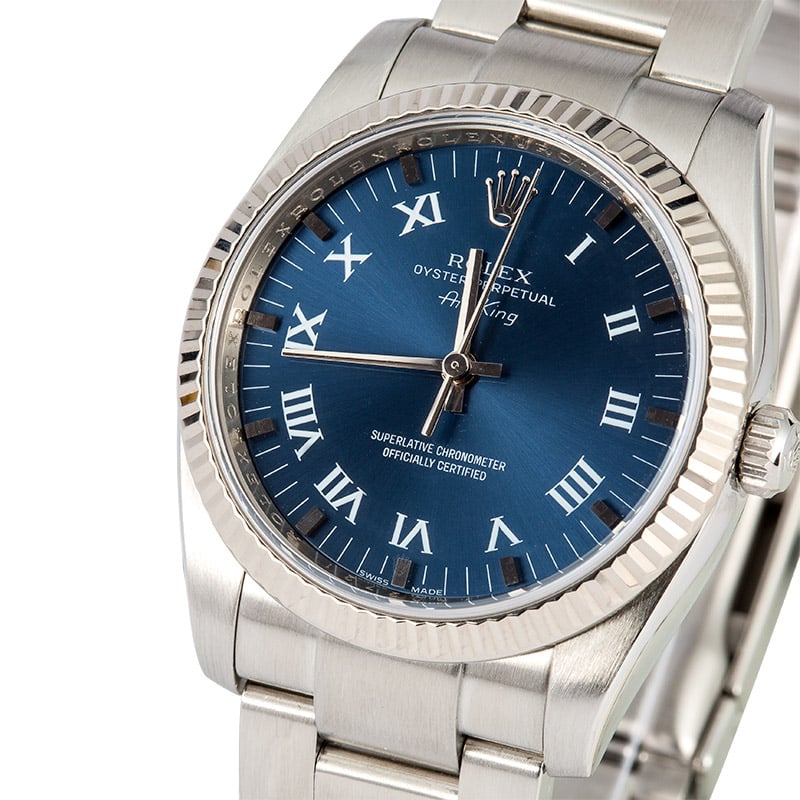 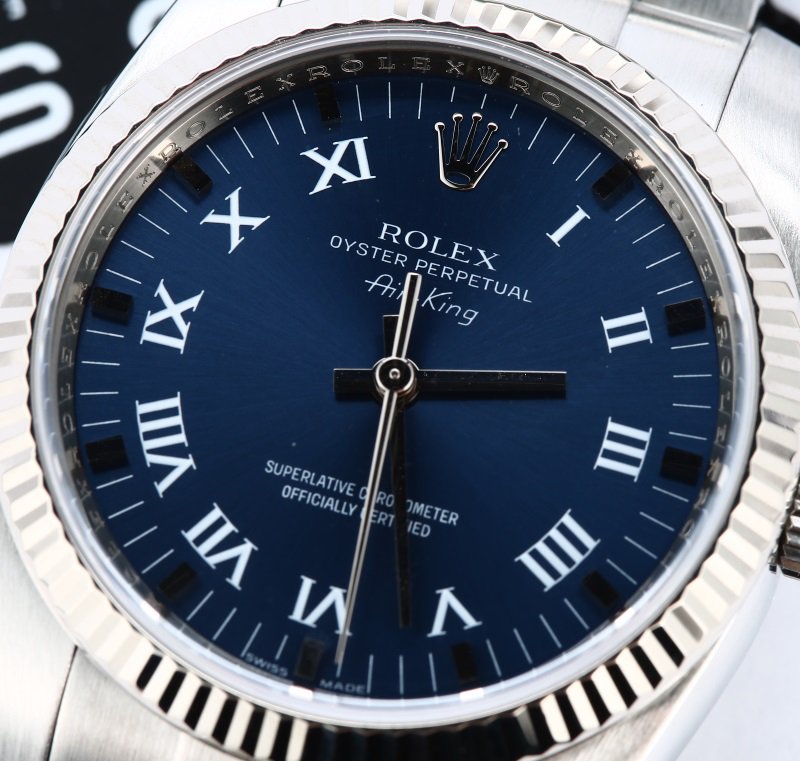 The Rolex Air-King ref. 114234 is a two-tone Rolesor model crafted in stainless steel and white gold. The stainless steel Oyster case of this Air-King is topped with a fluted 18k white gold bezel. Subsequently, the addition of the precious metal and the ornate fluted design adds a dressier touch to this particular Air-King. Since this is the only Air-King with a white gold bezel, it’s a unique member of the Air-King family. 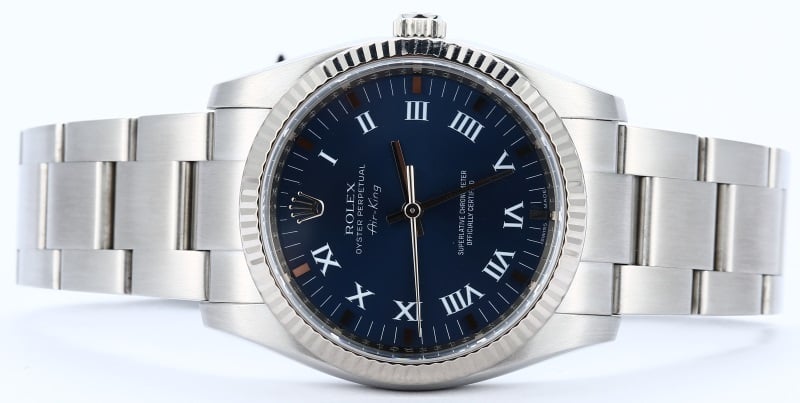 When launched in 2007, all of the then-new Air-King 14000 series models were officially certified by COSC, unlike the other Air-King watches that came before them. Consequently, the “Superlative Chronometer Officially Certified” label is placed prominently on the dial. Powering the ref. 114234 is the proprietary Rolex Caliber 3130 automatic mechanical movement. Because this is a time-only Rolex watch, the caliber drives the trio of center hands with no other functions. The winding crown is outfitted with the Twinlock system, therefore the Air-King is waterproof to 330 feet (100 meters). Plus, the scratchproof sapphire crystal and fluted caseback also add to the water resistance of the famed Oyster case.