Bronze has been a niche offering in the watch industry for quite some time now – remember the first Panerai Bronzo in 2011? However as time goes on, the case metal continues to grab more and more attention. At the forefront of this push into the mainstream is Oris. Their Carl Brashear limited edition diver from 2016 and the chronograph version from the following year were both huge hits that sold out fairly quickly; and since then, the brand has continued to add other bronze pieces to the catalog. This latest model – the 80th Anniversary Oris Pointer Date – is arguably the best looking and most versatile to date, and the best part is that it’s being serially produced rather than being a limited edition.

Unlike the first bronze Oris Pointer Date, the 80th Anniversary version will be a standard production model, rather than a limited-edition release (Image: Oris).

If this piece already seems oddly familiar to you, here’s why. At Baselworld in 2018, Oris unveiled a similar watch in bronze, though with a few key differences. Its dial is significantly more of a pastel hue when compared to this darker forest green – a shade much closer to the green dialed Divers Sixty-Five model in the current Oris catalog. The previous version also does not use the contrasting red tip for its pointer date hand, though this is much more of a subtle detail overall. Realistically, the biggest shift between the two models is case size – so much so that the shift in dimensions is enough to take the watch from being a complete deal-breaker to an appealing option for many collectors in the room.

The first Pointer Date in bronze measures only 36mm, which is fine if you’re coming from a vintage collecting background, but it can seem rather small for those accustomed to the majority of contemporary watches out there. This new version bumps things up to 40mm, landing in a perfect sweet spot for a wide range of tastes and wrist sizes. 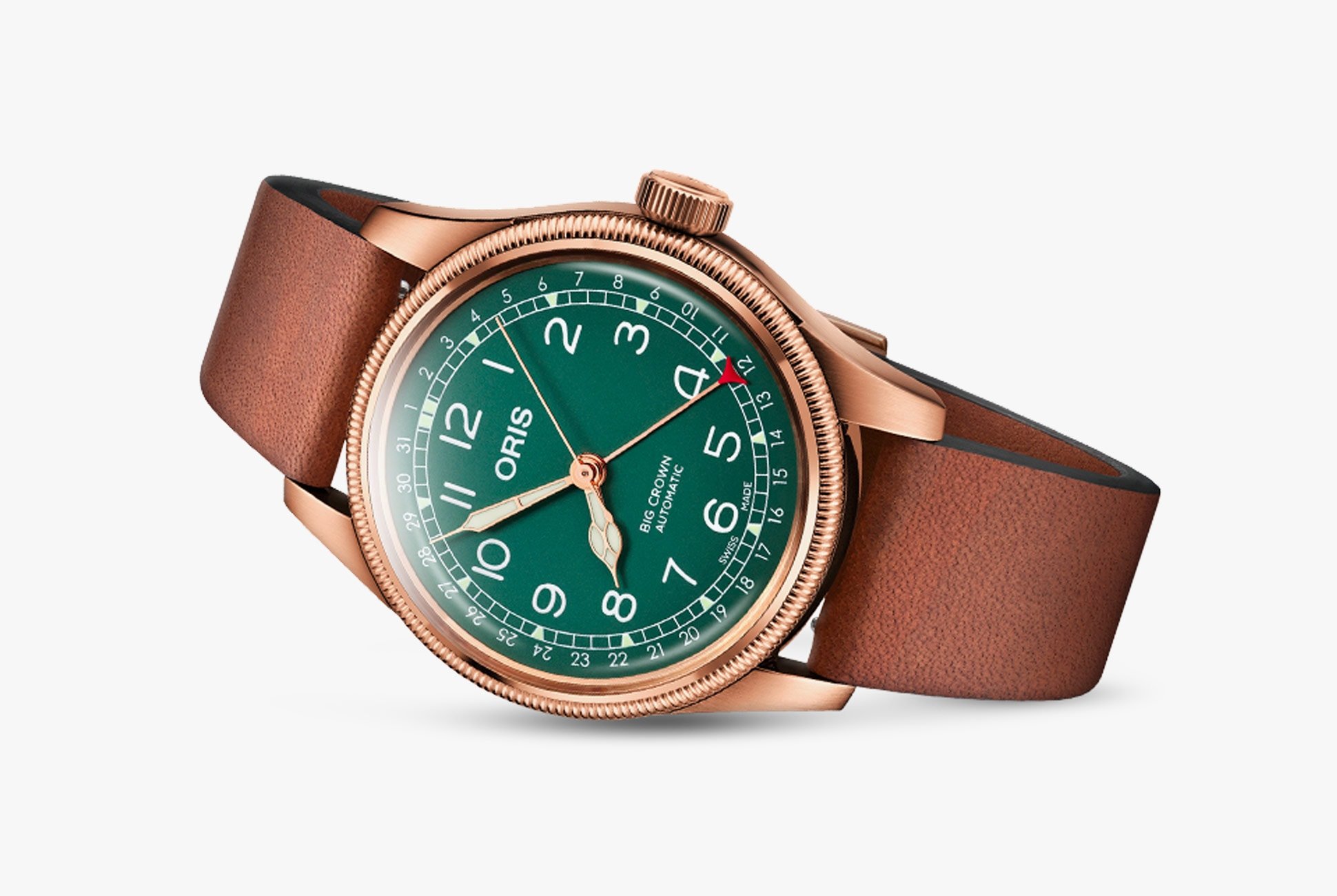 The 80th Anniversary Oris Pointer Date has seen an increase in size from 36mm to 40mm (Image: Oris).

Powering the new version of the Pointer Date is the Oris Caliber 754, which they’ve been using for quite some time in other Pointer Date models. It’s based on the Sellita SW200-1, which Oris uses a fair bit throughout its model range, as it is a tried-and-true utilitarian caliber that seldom has issues. The additional instantaneously jumping pointer date indication makes no impact on its power reserve, remaining at a somewhat modest 38-hours when fully wound. The automatic caliber features little in the way of decoration other than the trademark red-colored Oris winding rotor.

Now the great thing about bronze (and something that has hooked many watch enthusiasts over the years) is patina. Bronze is one of those metals that will develop all sorts of personality over time, and depending on the climate you live in, it can end up looking completely different from its siblings. A watch living in hot and dry Arizona will patina vastly differently than one living in the cold and damp Northeast. 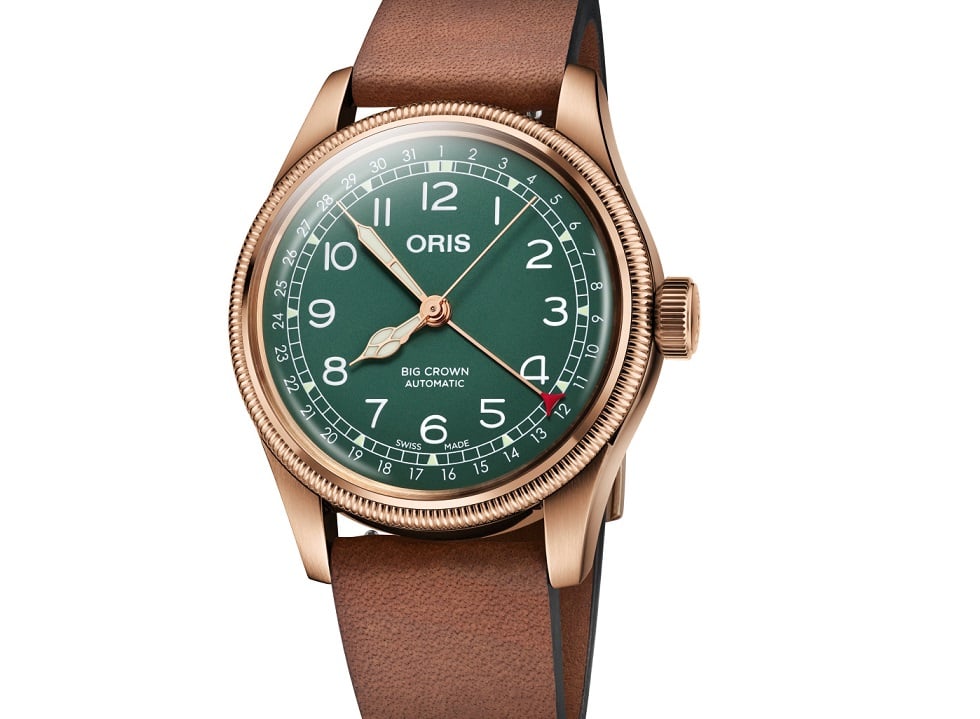 Due to the properties of bronze as a metal, the case of the 80th Anniversary Oris Pointer Date will develop a unique patina over time (Image: Oris).

What’s more, tricks like vinegar fuming, liver of sulfur, and others allow owners of bronze watches to play with this patina process on their own should they choose. It’s a lot like one of those “choose your own adventure” books, except in this case there’s no wrong answer that leads you to death. Want to keep it pristine and polished? Go for it. Want to make it look like it was found in a sunken ship? Totally doable.

The fact that this piece comes in a comfortable daily-wear size and is understated enough to match with a bit of everything means that it will have ample opportunity to be exposed to the elements and start its natural shift in a hurry. 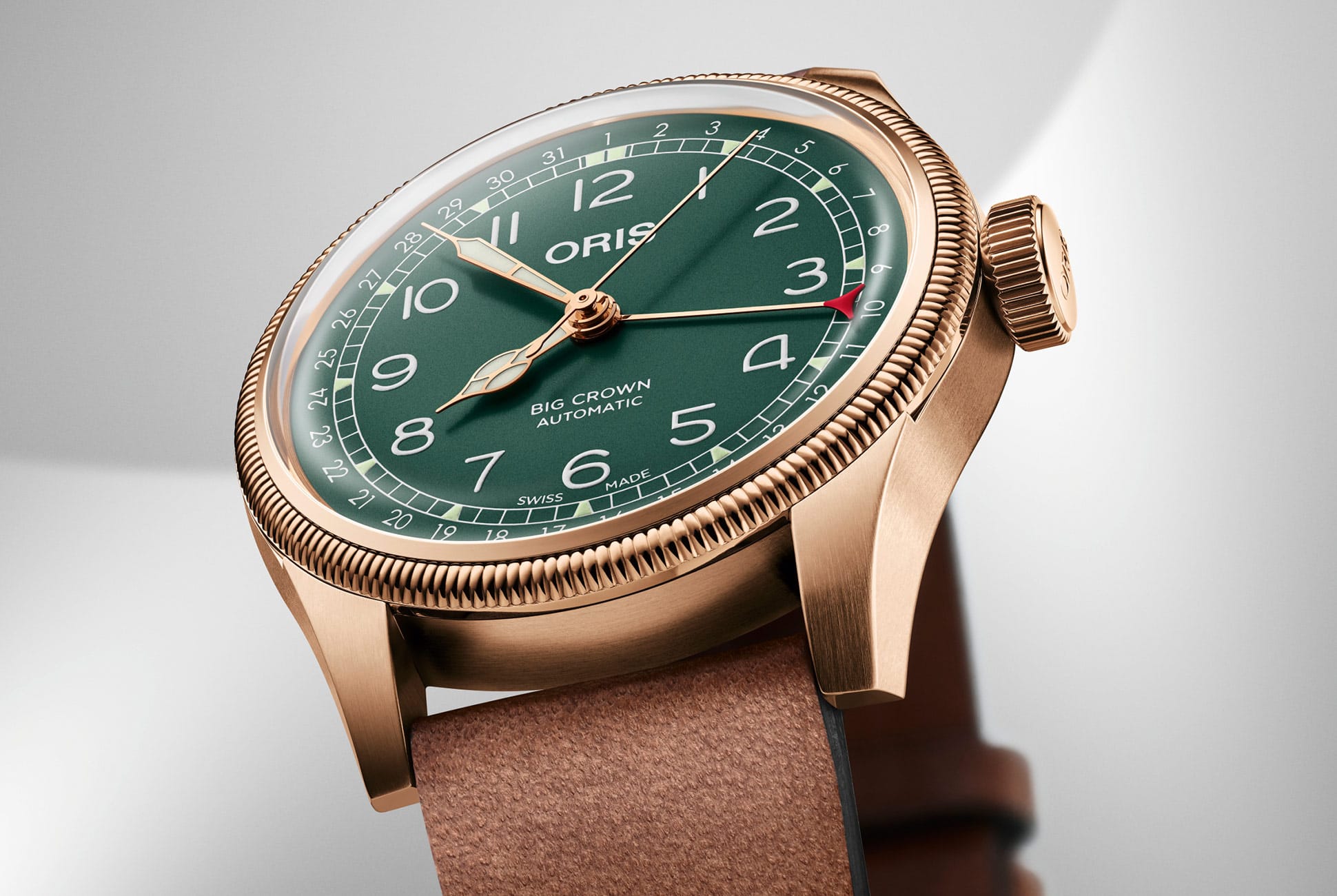 In addition to a larger case size and slightly different dial color, the 80th Anniversary Oris Pointer Date has been given a touch of red on the tip of its pointer date hand (Image: Oris).