Where It All Began: At Daytona with the Rolex 116509 White Gold Daytona

The first official appearance of the word “Daytona” appeared on the dial of a Rolex “Cosmograph” chronograph in 1965, going on to become one of the most coveted and legendary sports watches ever produced. The name came of course from the equally fabled Daytona racetrack, which like the watch itself, evolved over the  years. Originally opened as the Daytona Beach Road Course way back in 1902, it became world famous as the site where 15 world land speed records were set, including one by Sir Malcolm Campbell, one of the very first Rolex ambassadors. 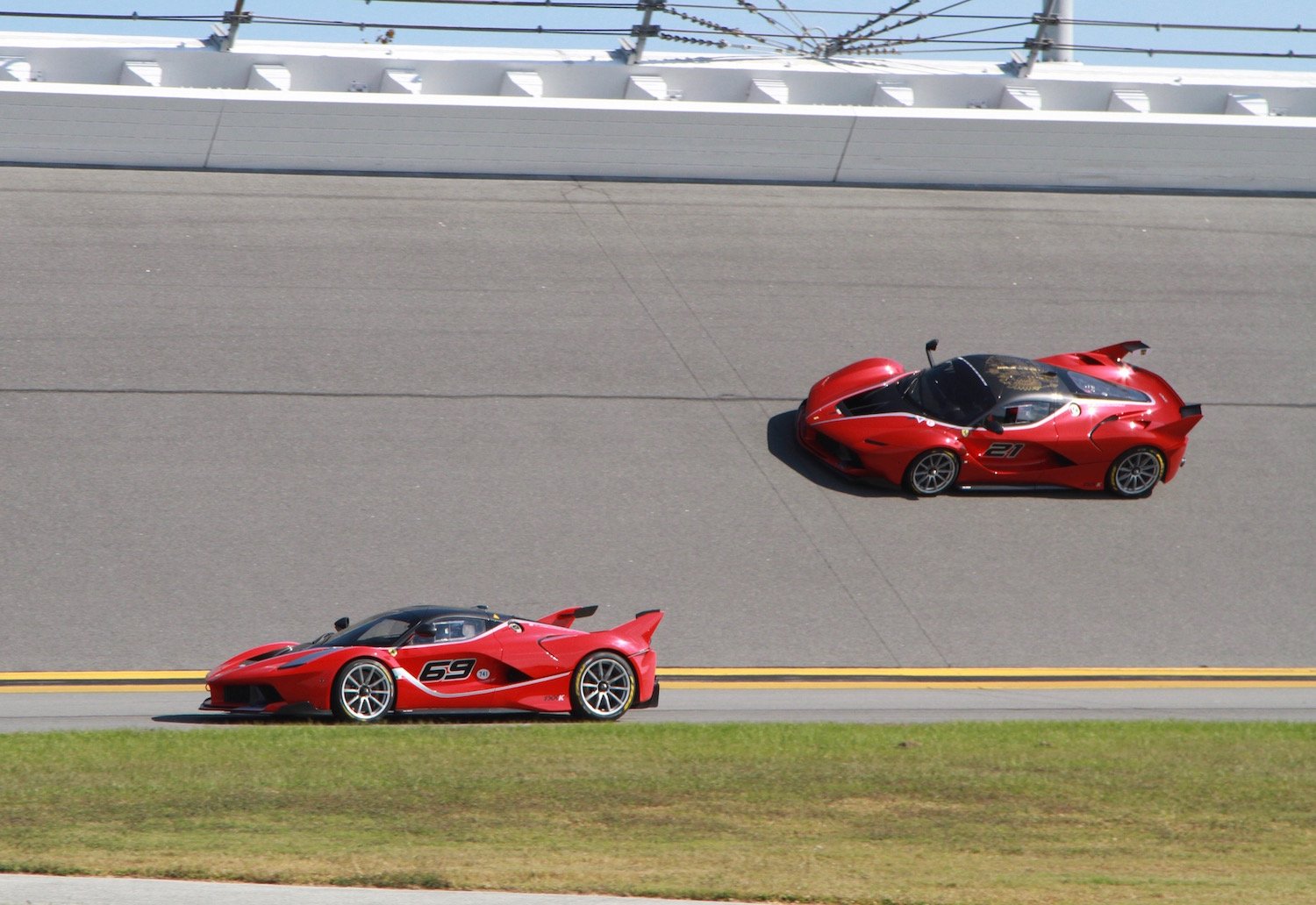 On February 19, 1928 Campbell achieved a new world record of 206.956 mph in his Blue Bird at Daytona, the event which eventually led to Rolex using the name on its dials nearly 40 years later, at which point the iconic Swiss watch brand’s ties to the world of racing at Daytona and elsewhere were already the stuff of legend. These days Rolex sponsors the ultimate endurance race, officially known as the Rolex 24 at Daytona (since 1991), at the track, which is now called the Daytona International Speedway. 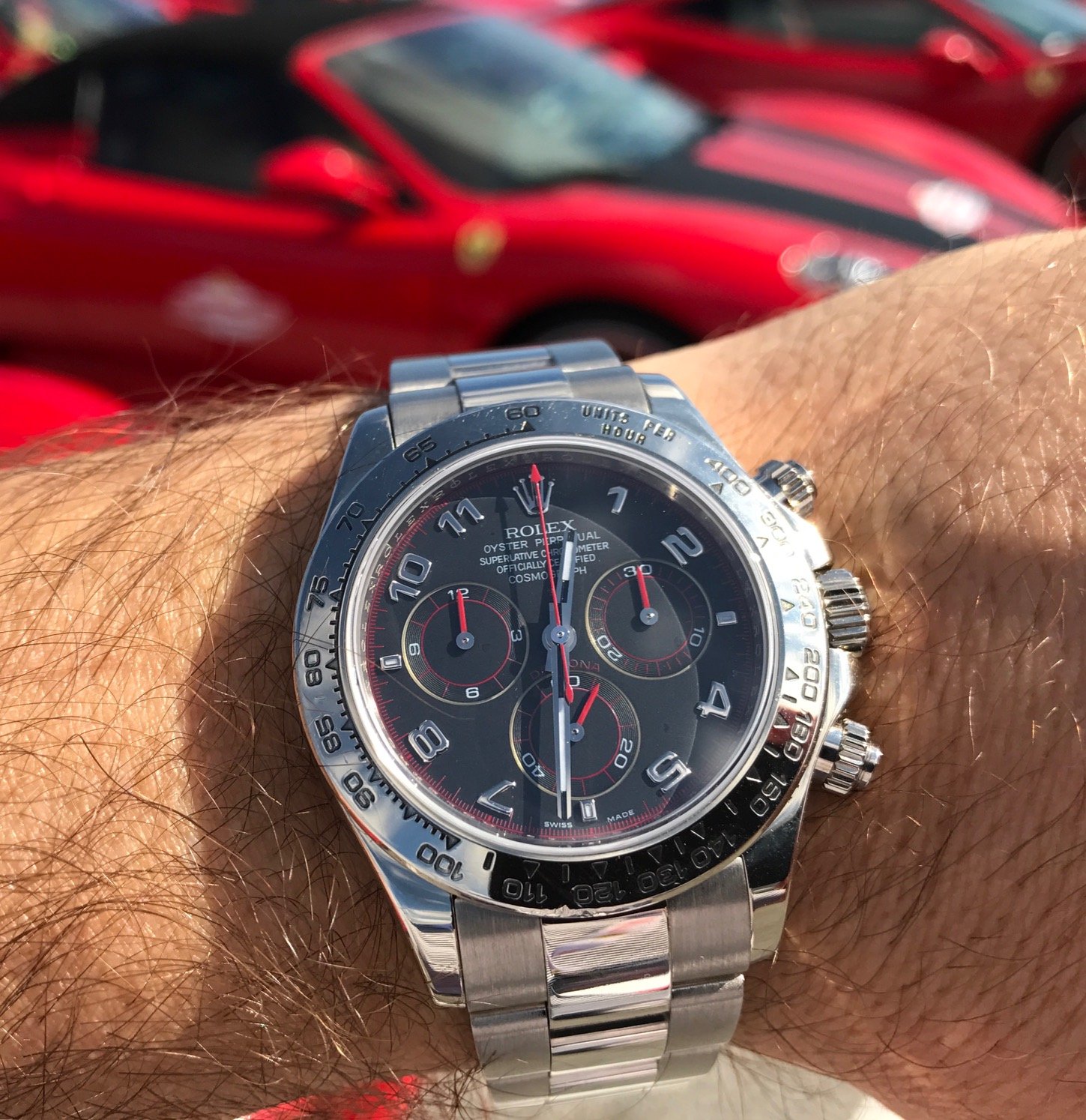 Paul Newman, an early adopter of Rolex’s Daytona model, perhaps pulled off the ultimate feat when he raced a Ferrari Daytona in the 1977 24 Hours of Daytona Race while wearing a Rolex Daytona. And while we may never replicate that feat we came pretty close recently during the Ferrari World Championship Finals. For the prestigious event at the Daytona International Speedway, Ferrari corse cliente (customer racing) clients from all over the world convene at the celebrated track to compete with some of the fastest cars on the planet. These include retired F1 cars, FXX and FXXK track cars based on the famed Ferrari Enzo, 599XX and 458 Challenge Evo race cars, 488 GTBs, and even a couple LaFerraris for good measure. 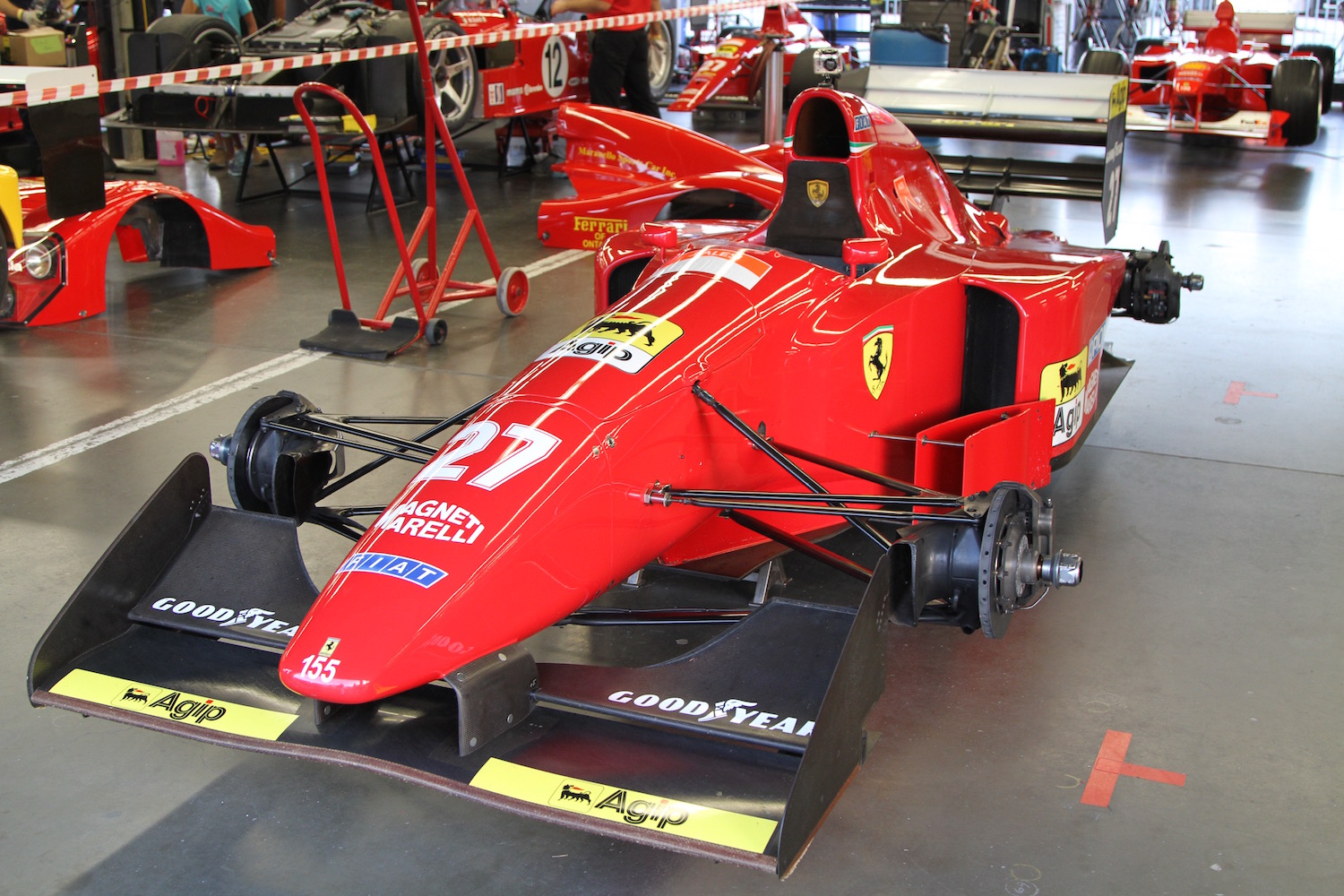 This is not your average Ferrari, it is made to speed down the track.

This year’s event brought the F1 Clienti cars to Daytona for the first time, and Ferrari had its star F1 drivers Kimi Räikkönen and Sebastian Vettel along. Obviously we had to wear a Rolex Daytona for the occasion, though selecting the exact model was no easy task. Finally given that these were for the most part modern Ferraris we decided on a reference from the current era, though beyond the basic stainless steel that has long been (among other things) the watch given to winning Rolex 24 drivers. Hence we selected the rare Ref. 116509 in 18k white gold, with its Ferrari red markings indicating that it’s no ordinary Daytona. 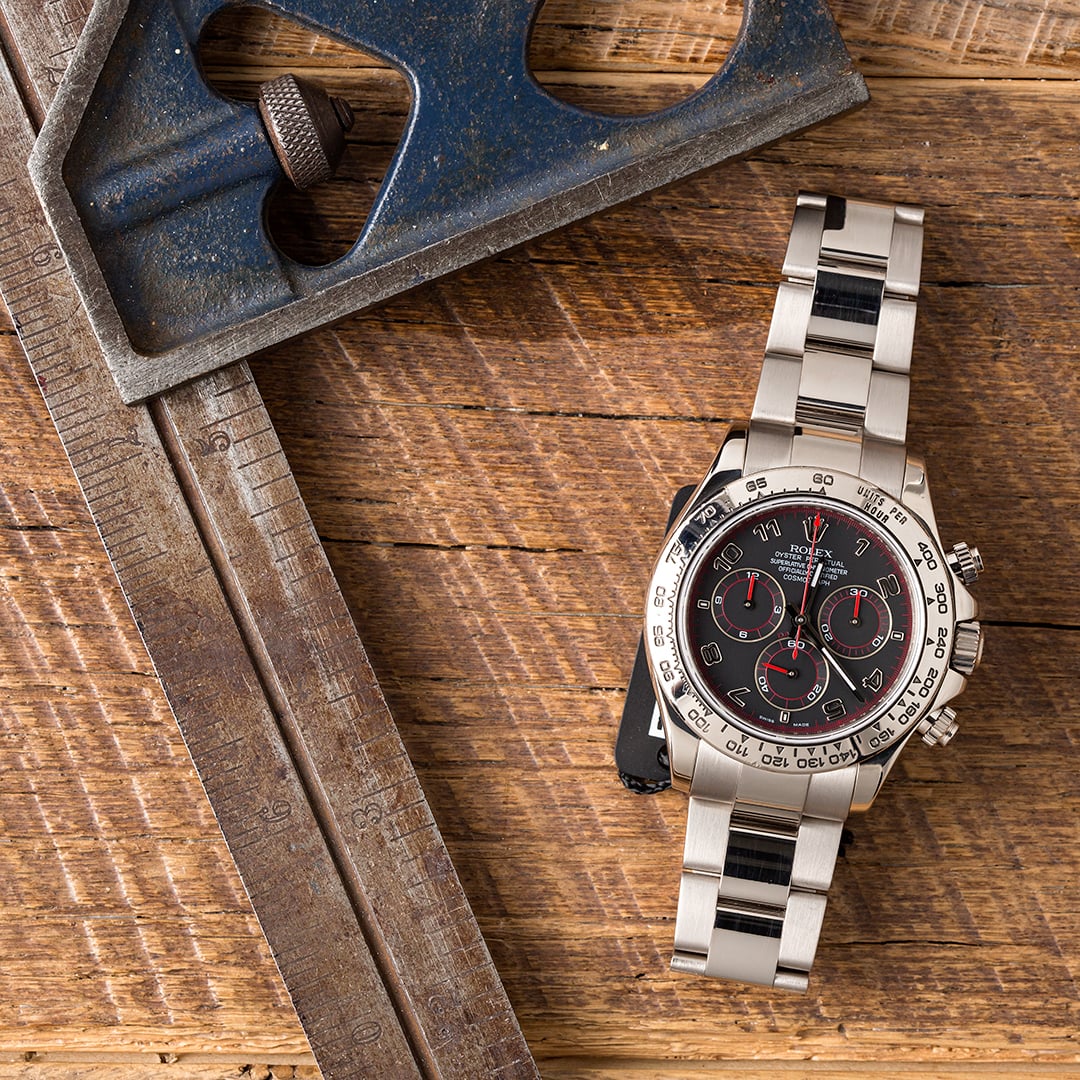 Rolex Daytona 116509 in white gold is a watch that will easily turn head.

At 40mm the watch is somewhat subtle by current standards, though the gold is both heavier and softer than steel. Something of a cognoscenti’s Daytona, it’s not as instantly recognizable as the classic modern steel models, mainly because the sub-dials are the same matte black as the main dial. We’d venture to say that while few may recognize it as the coveted white gold model, it’s the few who matter. The 116509 is also distinguished by its silver Arabic numerals which give it a rakish, appropriately racy feel. 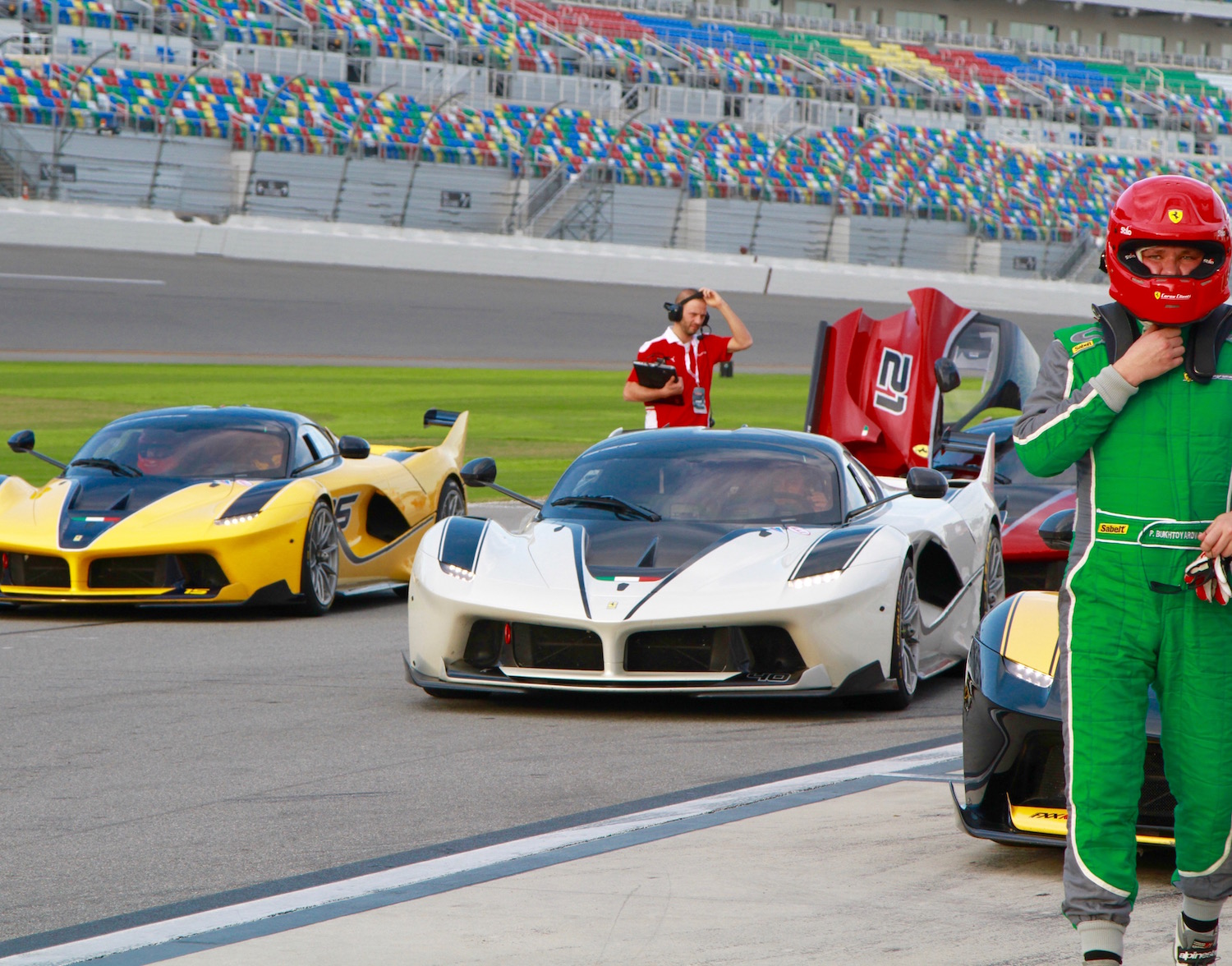 The Daytona 116509 is a watch that was given to the winners of this event.

You’re unlikely to spot someone else wearing a 116509, which is of course a large part of the appeal. Granted we did see a kindred spirit in Ferrari’s VIP hospitality pavilion at the race, which also included one of the largest Ferrari gatherings in the world (nearly 1,000 cars), but that’s a target rich environment, to say the least. The 116509 was the subject of many sidelong and envious glances, its stealthy appearance lending it a darker edge; the car at Daytona it resembled most was injured Ferrari racing legend Michael Schumacher’s own menacing FXX in triple black with red accents. We wouldn’t be surprised if Schumacher, who continues to make progress recovering at home in Switzerland, has a 116509 on his bedside table. And that he feels better just looking at it. What an event the Daytona Beach Road Course is.