In the second installment of our 5 Key Vintage Rolex Sports Models series, we take a detailed look at the highly successful GMT-Master ref. 1675

The second reference to join the GMT-Master family—following the inaugural GMT-Master ref. 6542—the GMT-Master ref. 1675 made its debut in 1959. As the latest model of Rolex’s pilot watches, it boasted several modifications over its predecessor including crown guards and the “Superlative Chronometer Officially Certified” label on the dial. 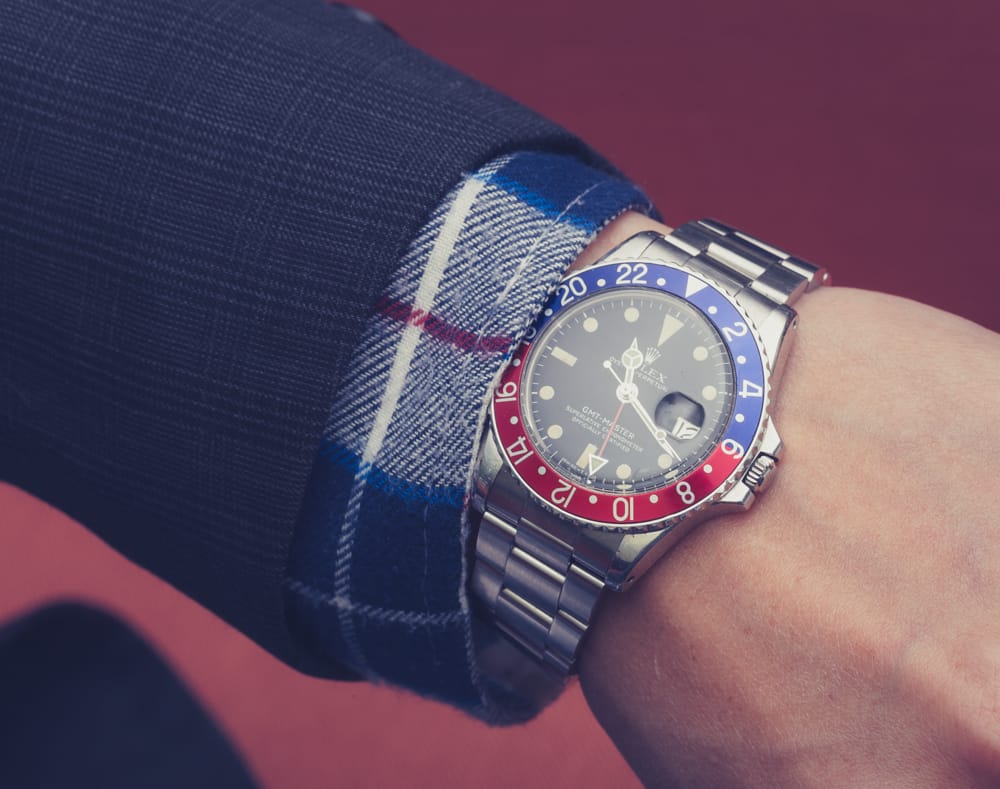 Furthermore, the ref. 1675 had a very long production run until 1980, so the model underwent several adjustments during the course of its history. Early models of the GMT-Master 1675 were powered by Caliber 1565, while later versions had the Caliber 1575. Worth noting is that in 1971, the hacking function was introduced to the Caliber 1575 where the seconds hand comes to a halt when the crown is pulled out, therefore, allowing for more precise time setting.

While the red and blue “Pepsi” dial is iconic to the stainless steel ref. 1675, Rolex did introduce the all black bezel version in the early 1970s. There’s also the more elusive “Blueberry” GMT-Master with a solid blue bezel, which is ultra rare and thus, highly coveted. 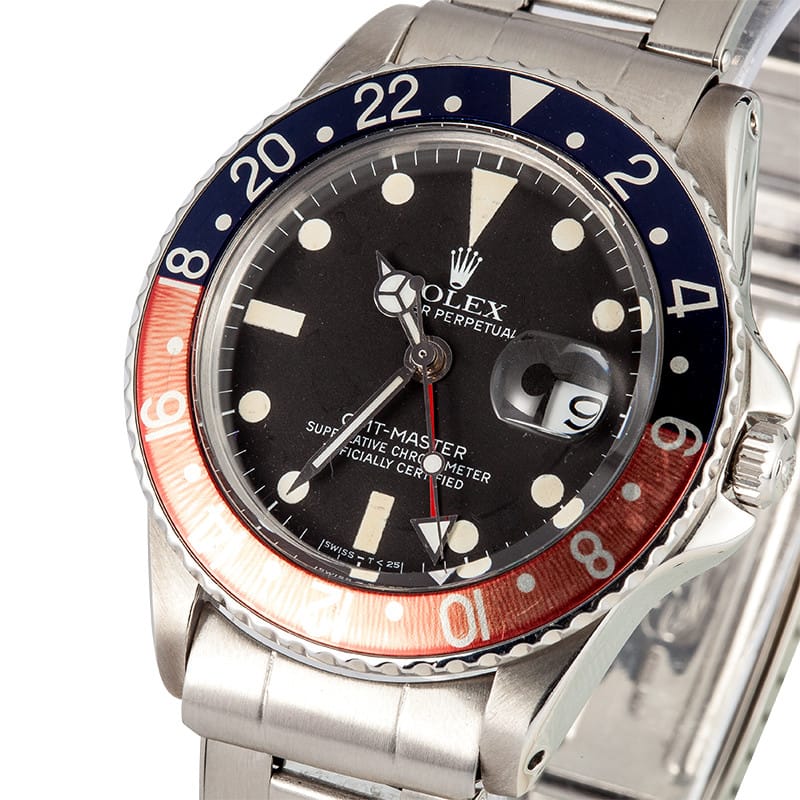 Especially noteworthy on a vintage GMT-Master ref. 1675 is the progression of the crown guards. The first versions of the crown guards were pointy and as a result gained the nickname “El Cornino” for its resemblance to horns. The pointy version, also known as PCG (pointed crown guard) was eventually replaced in the mid-1960s.

Since the horn-style crown guard versions of the ref. 1675 had a very short production run, they are rare and accordingly, very much in demand by vintage Rolex collectors. 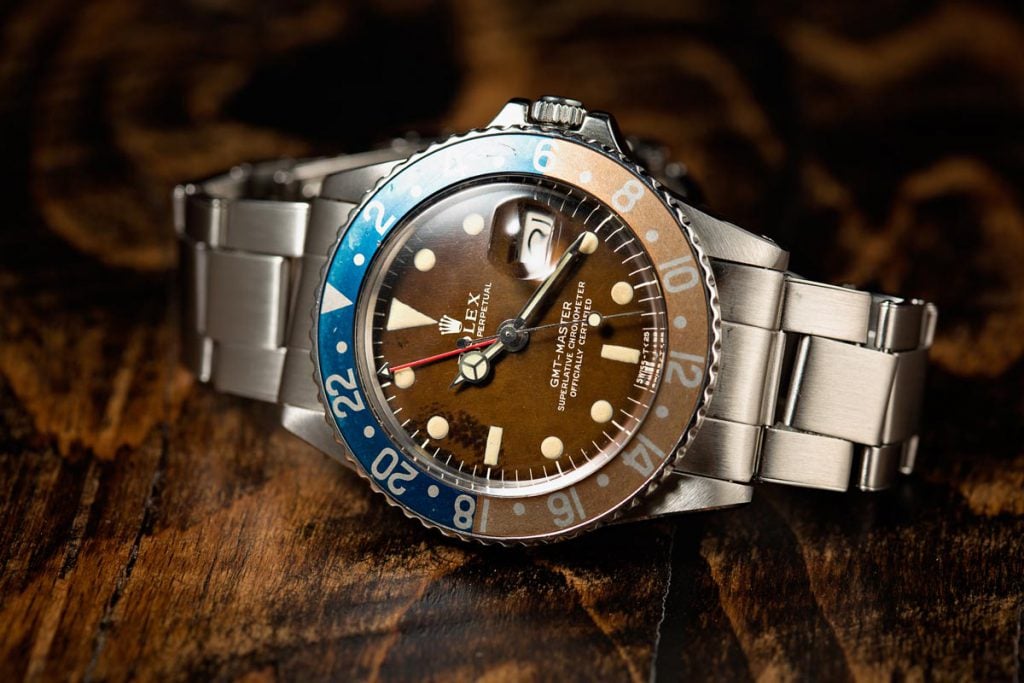 The Rolex GMT Master 1675 with a tropical dial

Over the 21 years of production, the GMT-hand of the ref. 1675 also underwent some changes. Up until the mid-1960s, the earliest versions of the GMT-Master ref. 1675 had a smaller triangle-tipped GMT-hand on the black glossy dial. They were then replaced with a larger triangle-tipped GMT-hand on later models with black matte dials. Of course, the purpose of the GMT-hand is to indicate an additional time zone to the center hands by pointing to the 24-hour marked bezel. Therefore, a larger GMT-hand was done to increase legibility.

The vintage GMT-Master 1675 had a choice of a stainless steel Jubilee bracelet or a stainless steel Oyster bracelet. In fact, it was the first Rolex sports watch that had the bracelet choice. However, there are plenty of collectors today that have switched out the steel bracelets for leather bands or NATO straps for a more personalized look.

Luxurious Versions of the GMT-Master ref. 1675 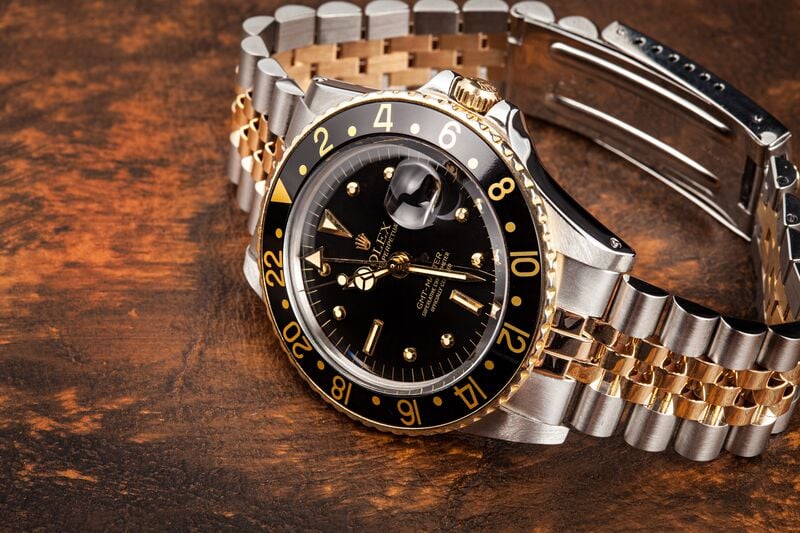 GMT-Master ref. 1675/3 with a black dial and a beautiful jubilee bracelet.

Because of its long production run, the GMT-Master ref. 1675 is not only an iconic vintage Rolex, but also one that is relatively easy to add to one’s collection. Whether opting for early 1960s versions or more modern late 1970s or early 1980 models, tough steel options or more luxurious gold materials, collectors are presented with many variants for their choice of the GMT-Master 1675.