To say the Rolex Daytona reference 116500LN was long overdue when it finally broke cover in 2016 would be an understatement. Its predecessor the Daytona 16520 had been in production since the year 2000, but Cerachrom ceramic bezels from Rolex first hit the market in 2005, and from that very day enthusiasts began speculating that (and begging for) a ceramic bezel Daytona was in the works. It took a long 11-year wait, but the 116500LN finally arrived, fueling one of the longest product waitlists in Rolex history as the new ceramic Daytonas started trickling into the marketplace. Even now these gems remain in very high demand, commanding a modest premium over their $12,900 retail price. Of course its new bezel plays a big role, but there are a number of other minor updates that also play into the new Daytona’s mass appeal.

The Rolex Daytona 116500LN made a big splash at Baselworld

From the moment the 116500LN first hit the stage at Baselworld, You couldn’t make it 20 feet through the halls without hearing someone muttering something about the new ceramic bezel Daytona. Both white and black dial variants feature a black Cerachrom ceramic bezel with an  etched Tachymeter scale, as has been present throughout the history of the model. This simple change makes a huge impact to the aesthetic of the watch when compared to the previous 16520, both by adding a contrasting color to the case, as well as by making the bezel far more reflective than it has ever been. If the goal was to make the Daytona stand out more when on wrist, mission accomplished.

The new material doesn’t only impact the new Daytona visually either. One of the major advancements with Cerachrom ceramic bezels comes down to the material’s strength and longevity. Near impervious to scratching or fading, Rolex’s goal with the material when it launched was to rid its bezels was primarily to avoid the UV fading that came with the aluminum bezel inserts of decades past. Many enthusiasts and collectors, myself included, have a soft spot for the aged look that comes with a faded bezel insert, but we can still appreciate the value in having a watch that stays looking shiny and new for decades on end.

Cool as it is, there are still some pitfalls that come with the Cerachrom switch. Though scratch resistant, ceramic is anything but bulletproof. Should you be the type to wear your watch at all times, given the right hit it it still possible to crack or shatter ceramic with the right impact. Rather than being left with a dent, as you would get from a more malleable metal, this kind of damage is grounds for replacement, and given the higher manufacturing costs you’ll be looking at a steeper bill from your authorized Rolex service center to complete a replacement. This isn’t something that’s necessarily a deal breaker, but it is a factor to keep in mind. 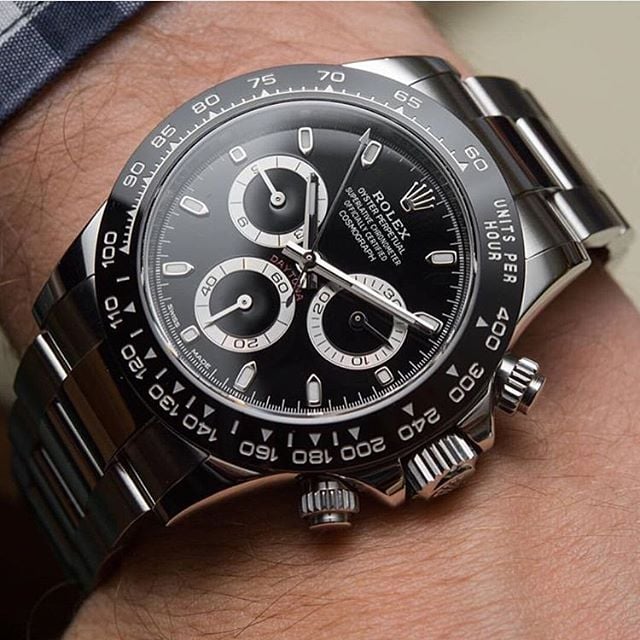 On the dial there’s very little to report in the way of changes on the 116500LN. In the case of the black dial, the only noteworthy talking points are the fact that the dial appears to be a touch more glossy than its predecessor, and that the massive five line block of text below the crown seems to have shrunk a tiny bit when compared to the 116520. Otherwise, it’s entirely business as usual, which isn’t a bad thing. The word Daytona is still printed in red, and draped across the top of the running seconds subdial at six o’clock.

Looking at the white dial, there’s one more change that to this day we’re still a little on the fence about. The minute, second, and hour tracks of its subdials have been swapped to black (previously silver) to match the black color of its ceramic bezel. This definitely adds an interesting added detail to the watch, however we can’t help but wonder how much better the white dial 116500LN would have looked if Rolex had committed to completely black subdials, reviving the old Panda chronograph look of so many iconic vintage Daytonas of years past. With the black dial the current look still works just fine, but imagine the uproar that a new Panda dial Daytona could/would have created. For now the white dial certainly isn’t a bad looking watch, and the way trends are going we wouldn’t rule out adding this design change to a future model in the years to come. 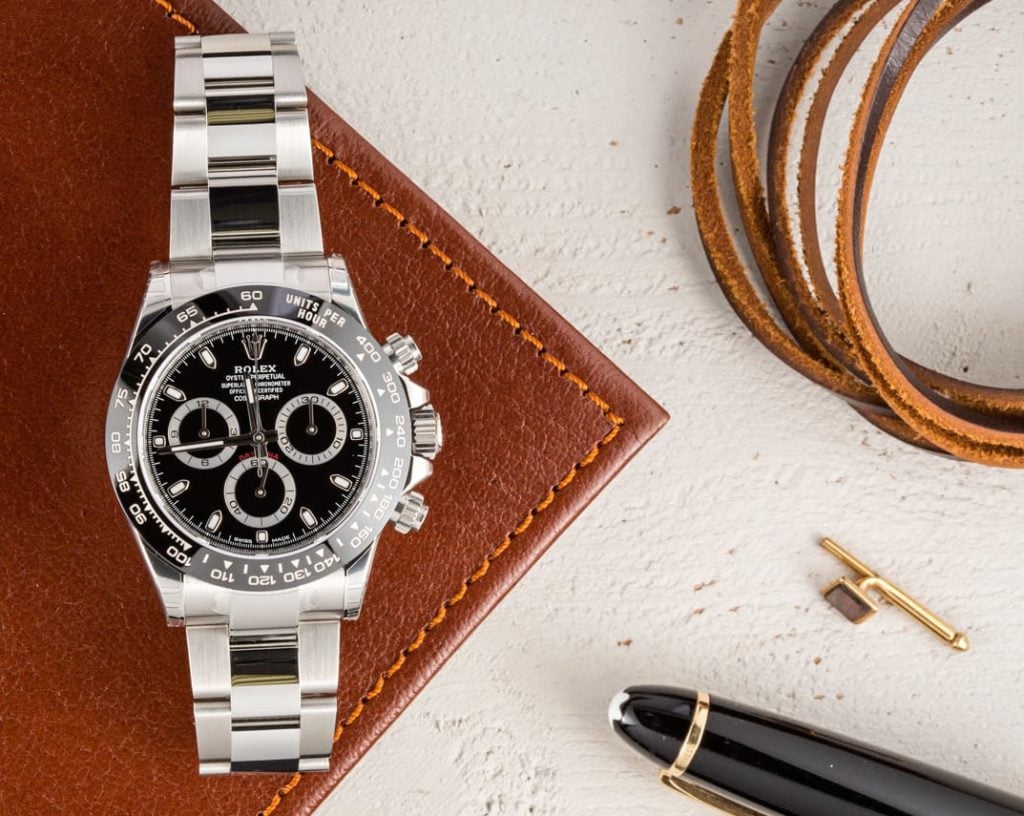 The Rolex Daytona 116500LN, thankfully, did not change its finishing or dimensions

Thankfully two of the most loved details about the Daytona remain untouched with the new release. It is still powered by the Rolex caliber 4130, which was the brand’s first fully in-house built caliber in ages when it came to market in 2000. The caliber has proven itself to be incredibly reliable, and thanks to its thoughtful design it is also much easier to service than the Zenith-based 4030 it replaced. The Daytona’s case also remains untouched in terms of dimensions and finishing, which is also a plus. 40mm across, and relatively slender, the modern Daytona is one of few chronographs that is perfectly proportioned for both large and small wrists. This detail, as well as its general wearing comfort has played a big role in the Daytona’s immense following over the years, and though a number of people have called for an increase in size over the years, we’re happy to see Rolex sticking to their guns on this front. 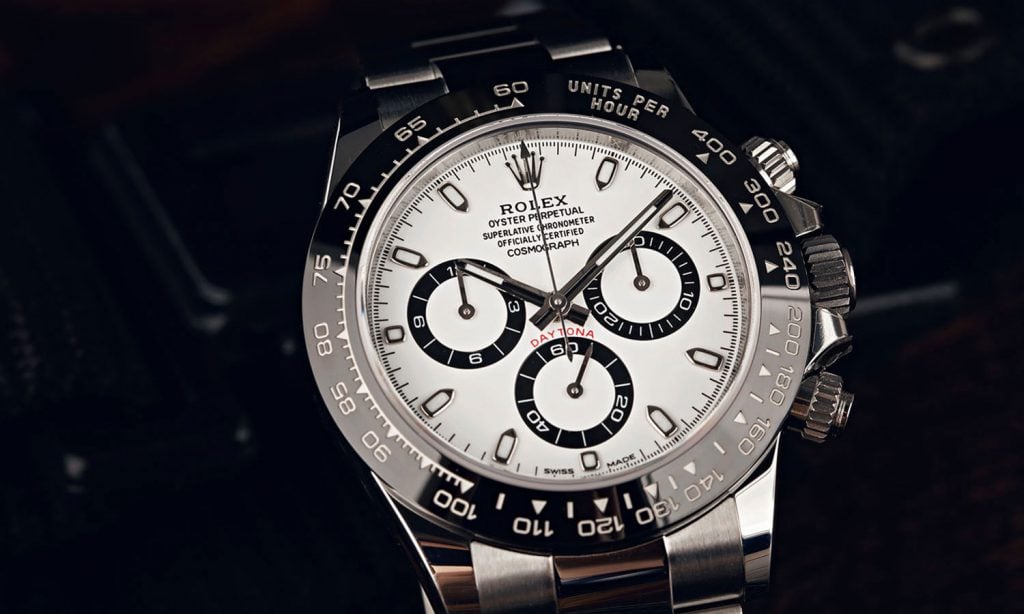