When Omega finds a name it likes, the brand sticks with it. For example, there have been models titled the ‘Seamaster’ in their collection since 1948. However, that is not to say that all the watches produced under that name have been similar. Far from it, in fact. Since those early days, the ‘Seamaster’ name has been used for everything from elegantly restrained dress pieces to great hulking slabs of steel with a dial attached. In 1993, Omega released a new iteration of the Omega Seamaster, one that would become undoubtedly the most important watch that the brand has created in the modern era, and one that sits comfortably among the most iconic in their history: the Omega Seamaster Diver 300M 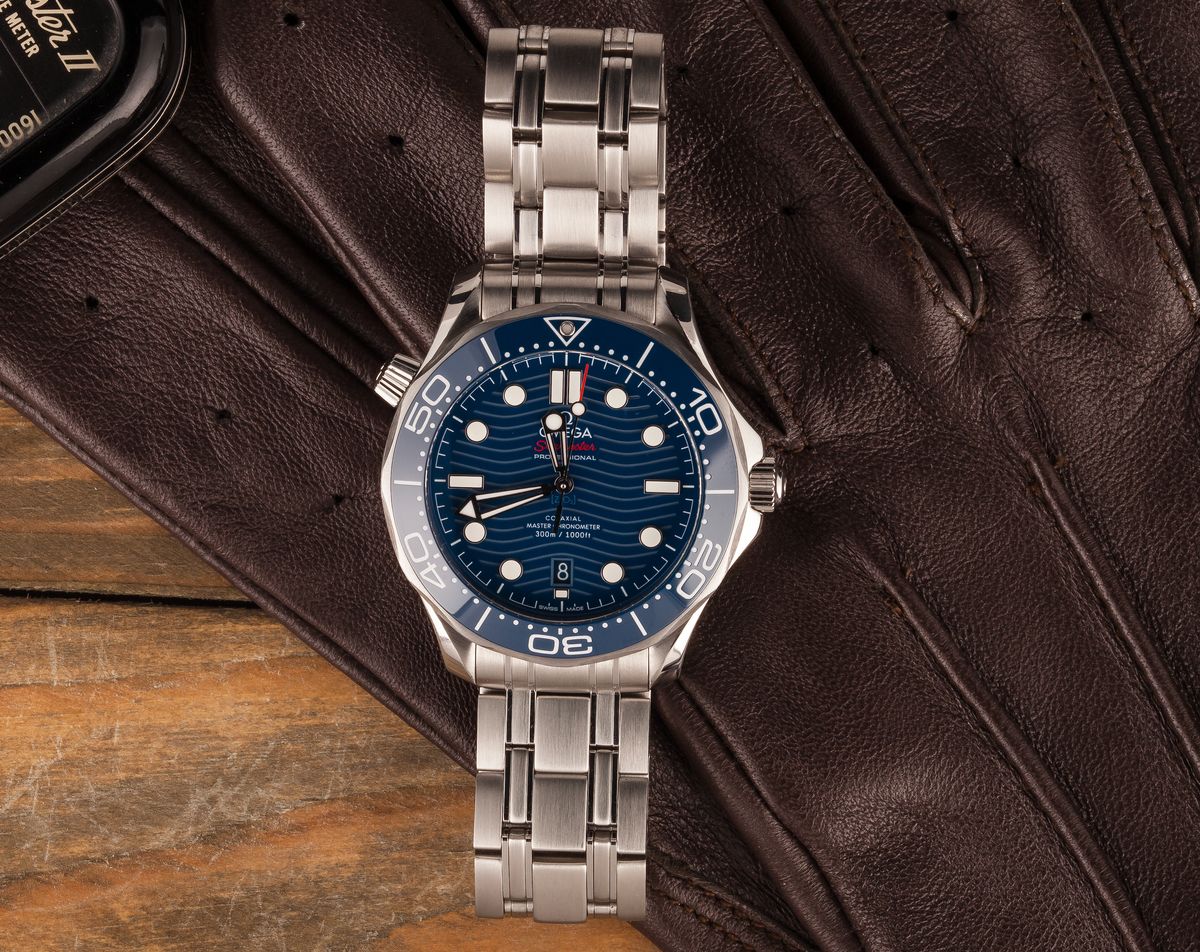 Launched in time-and-date, GMT, and chronograph variants, the Omega Seamaster Professional Diver 300M marked a fresh start for the brand and its dive watches. While the brand was well versed in producing models for commercial saturation crews, with the likes of the Seamaster 600 and 1000 PloProf watches from the 1970s, the Seamaster Diver 300M was the first watch from the company to feature a helium escape valve (which was not included on the GMT model), which appeared as an extra crown at the ten o’clock position. 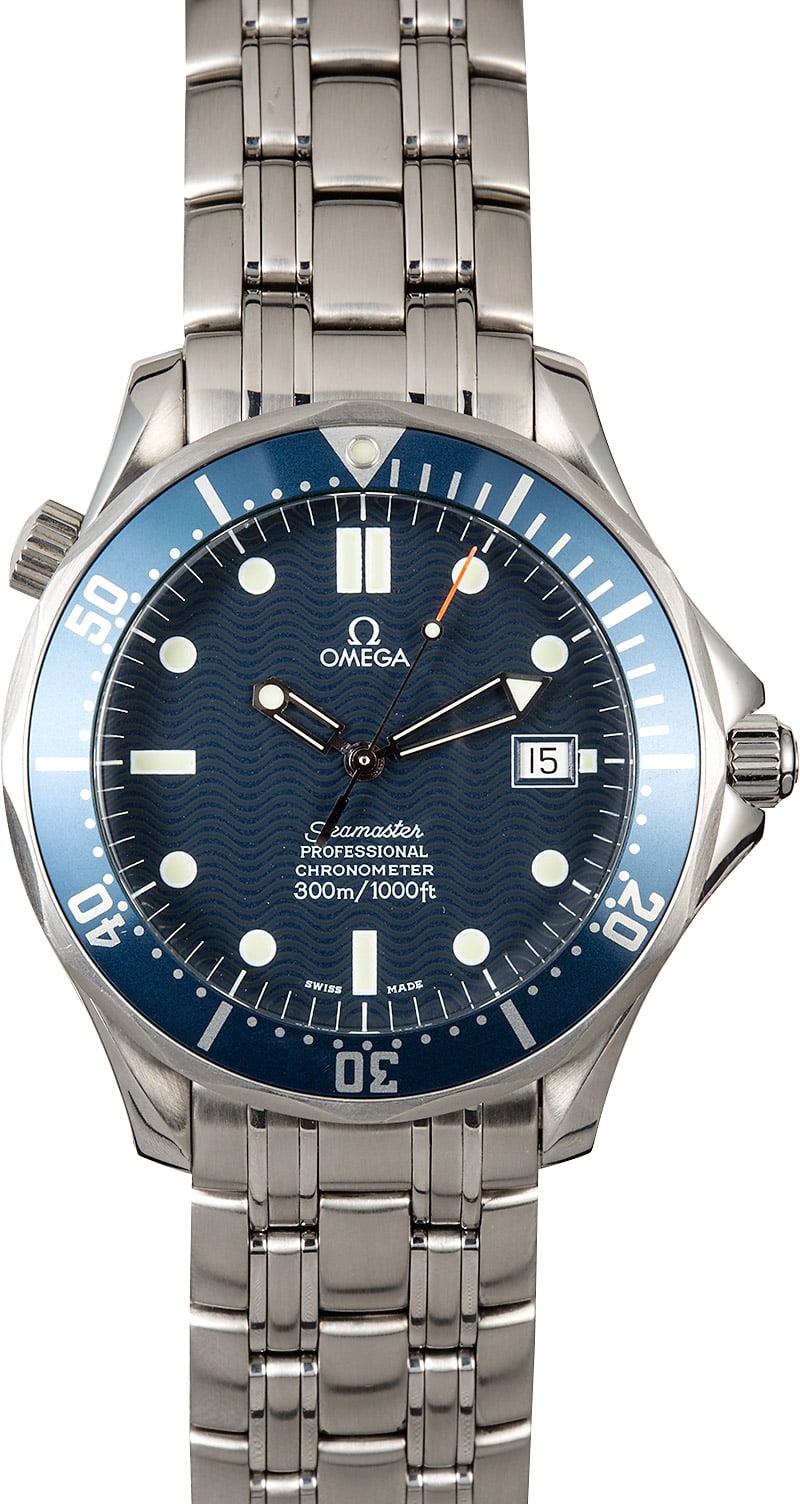 The Omega Seamster Diver 300M also borrowed the same ‘Plongeur’ style handset from those previous workhorses, although this time in a skeletonized version. It was clearly designed to live up to its ‘Professional’ tag and had plenty of pluses in its favor. Yet, for the first two years of its run, the Omega Seamster Diver 300M remained a modest seller among the various Omega watches with only around 4,500 pieces leaving the stores. However, that all changed (and in a big way) in 1995.

The James Bond franchise recruited a new face of 007 that year, by the name of Pierce Brosnan. Offering a different take on the character after all the brooding Timothy Dalton era, it was only right the world’s most famous spy should refresh his look. Before the new Bond’s debut in Goldeneye, the movie’s production designer, Lindy Hemming decided Omega’s newest creation was the perfect match for 007, furnishing him with the quartz-powered ref. 2541.80.

With a highly distinctive blue bezel and dial, along with its now-trademark wave pattern engraved in the dial’s surface, James Bond’s Omega Seamaster Diver 300M transformed the watch’s image overnight. The following year, sales reached over 50,000 units. For his next three outings (Tomorrow Never Dies, The World is Not Enough, and Die Another Day) Brosnan wore the automatic version of that first watch, the ref. 2531.80. 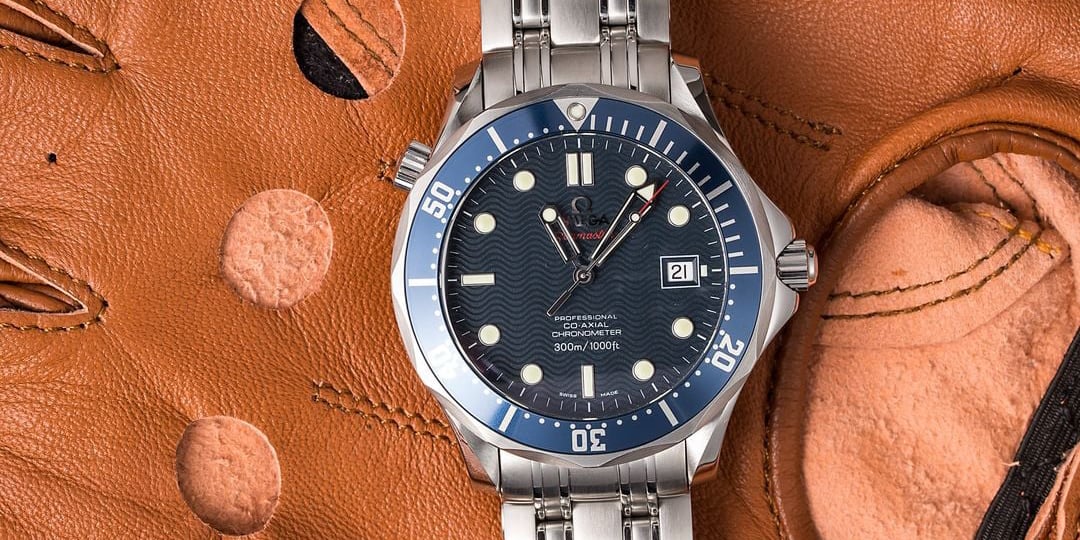 The relationship between Omega and the James Bond film franchise has been a long and extremely fruitful one, with the secret agent wearing nothing but Omega watches right up to the present day, including several generations of the Seamaster Diver 300M. The model has developed through a number of generations over the years, generally keeping its core design cues such as the scalloped bezel, the skeletonized handset, and its unique bracelet. However, the watch has been issued in a range of metals and sizes, and the movements have been systematically upgraded.

In 1998, the Omega Seamster Diver 300M got its first Co-Axial movement, the Cal. 2500. In fact, the mechanism was actually an ETA 2892, modified to feature the brand’s Co-Axial escapement – the George Daniels invention that has been described as the most significant step forward in mechanical watchmaking of the 20th century, and to which Omega has held the sole rights to its use since 1993. While other models in the brand’s collection were already being fitted with Co-Axial movements by this time, the Omega Seamaster Diver 300M lagged behind in an effort to keep the watch at its entry-level price. 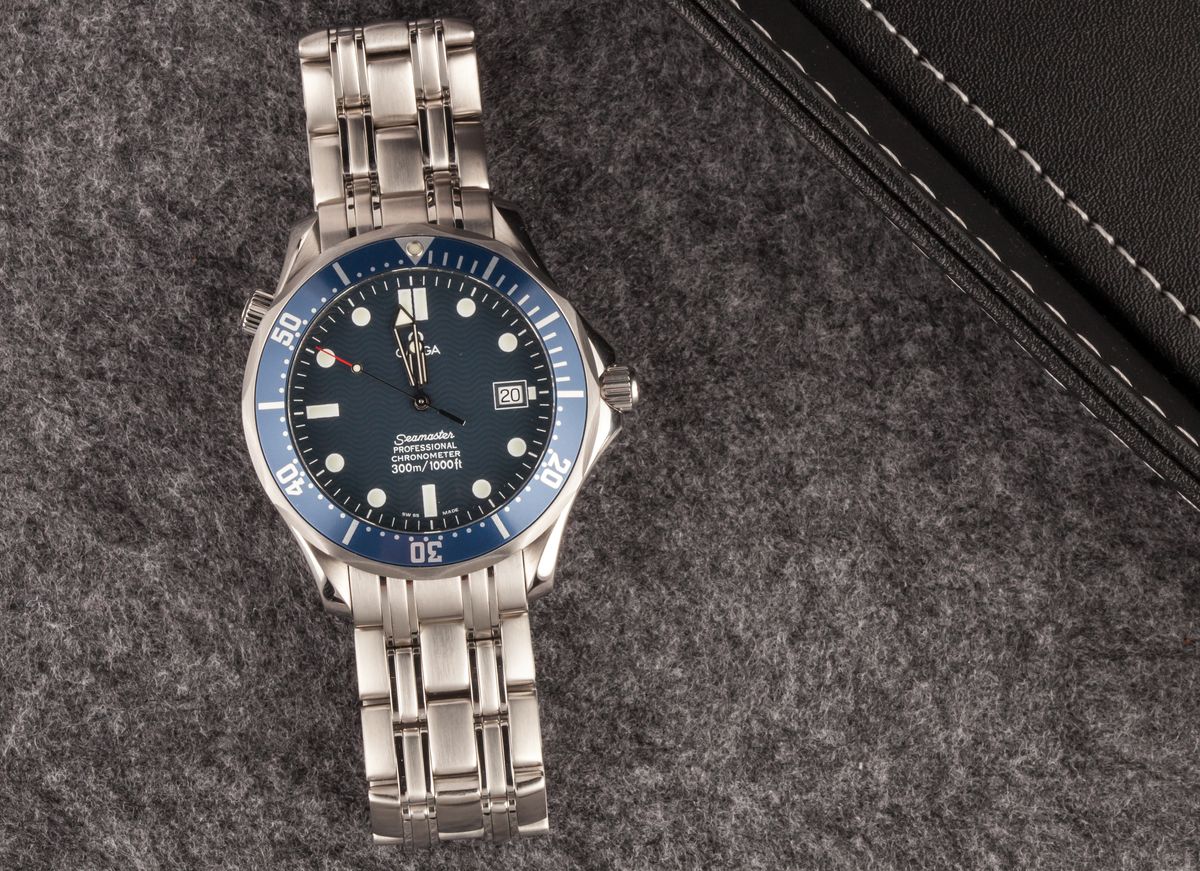 The most recent iteration of the Omega Seamaster Diver 300M was released in 2018, celebrating the 25th anniversary of the watch that has done so much towards bringing Omega back into the limelight. Now into its fourth generation, this new version has certainly been given a facelift, yet it holds on to the critical factors that made it so popular in the first place.

Originally released in 14 different models, you could take your pick from six in stainless steel and eight in two-tone steel and gold. There was also a limited edition piece, the ref. 210.60.42.20.99.001, which was restricted to 2,500 examples and featured a mixed metal construction consisting of titanium, tantalum (an extremely robust blue/grey metal), and Sedna gold. 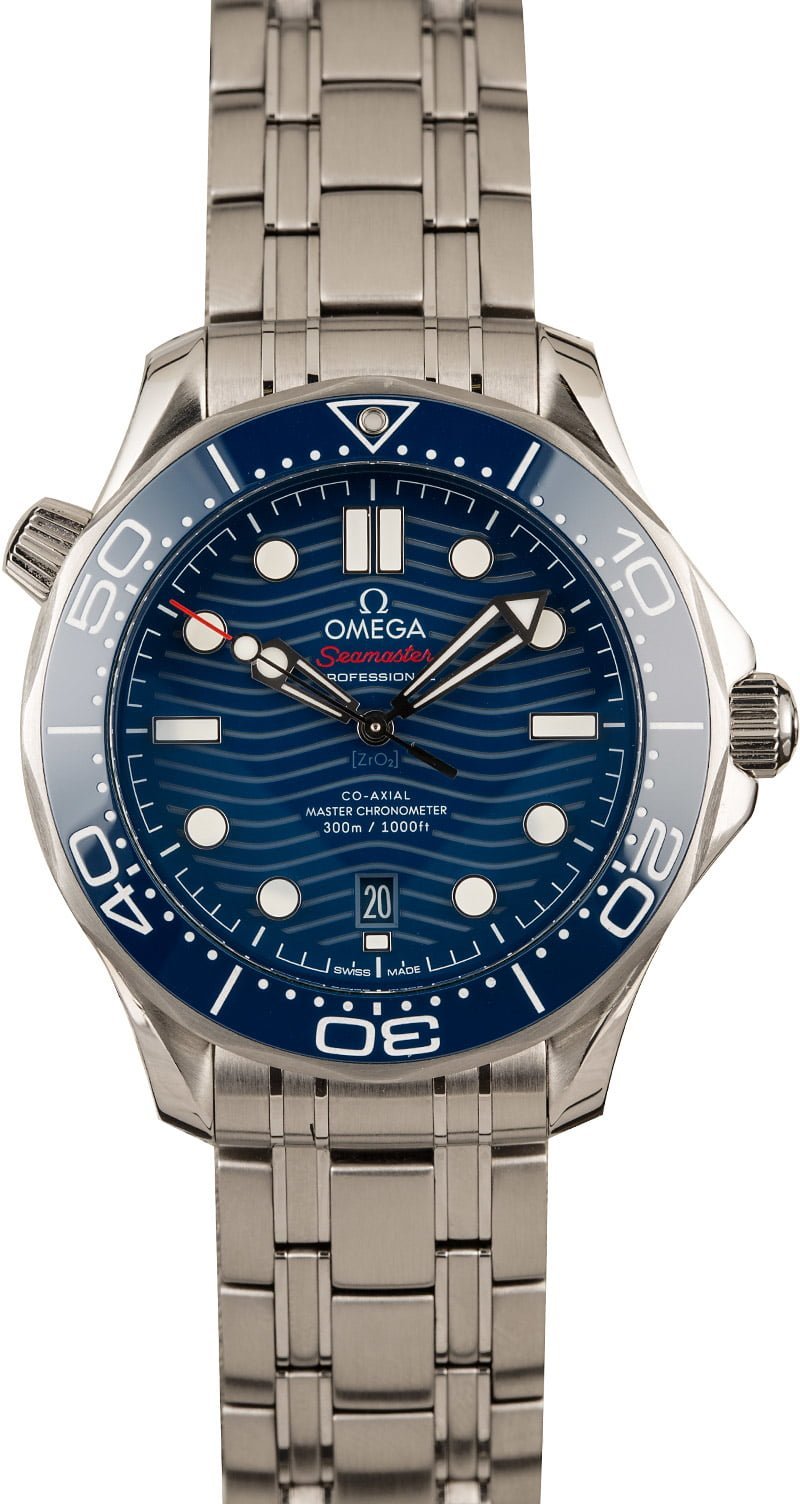 The case sizes increased slightly, up to 42mm from the previous 41mm. Additionally, the wave dial, which had been absent for a few years made a return, much to the excitement of collectors and fans of the brand. Available in either black, white, blue, or grey, the dials on this new collection are crafted from ceramic, and this time the wave pattern is laser engraved in the surface, offering a thoroughly modern take on a classic and much-charished aesthetic.

The bezels on the latest generation of Omega Seamaster Diver 300M watches are also made from ceramic, with their diving scales formed from either Ceragold (on the two-tone pieces) or white enamel. The manually-operated helium escape valve has also gone through a redesign, now conical in shape and (according to Omega) safe to operate underwater. Full marks for bravery if you attempt that!

Other subtle changes include a new style for the hands, and also the bracelet, which has long been something of a polarizing affair. Looking like a nine-link band (but in reality only five) some have accused it of dating the watch somewhat. For this latest model, the bracelet has been squared-off and flattened slightly, bringing it more up to date, and the clasp has been fitted with a diver’s extension that allows wearers to adjust the length of the bracelet by up to a 33mm. With that in mind, a rubber strap alternative is also available for those that prefer a more traditional style. 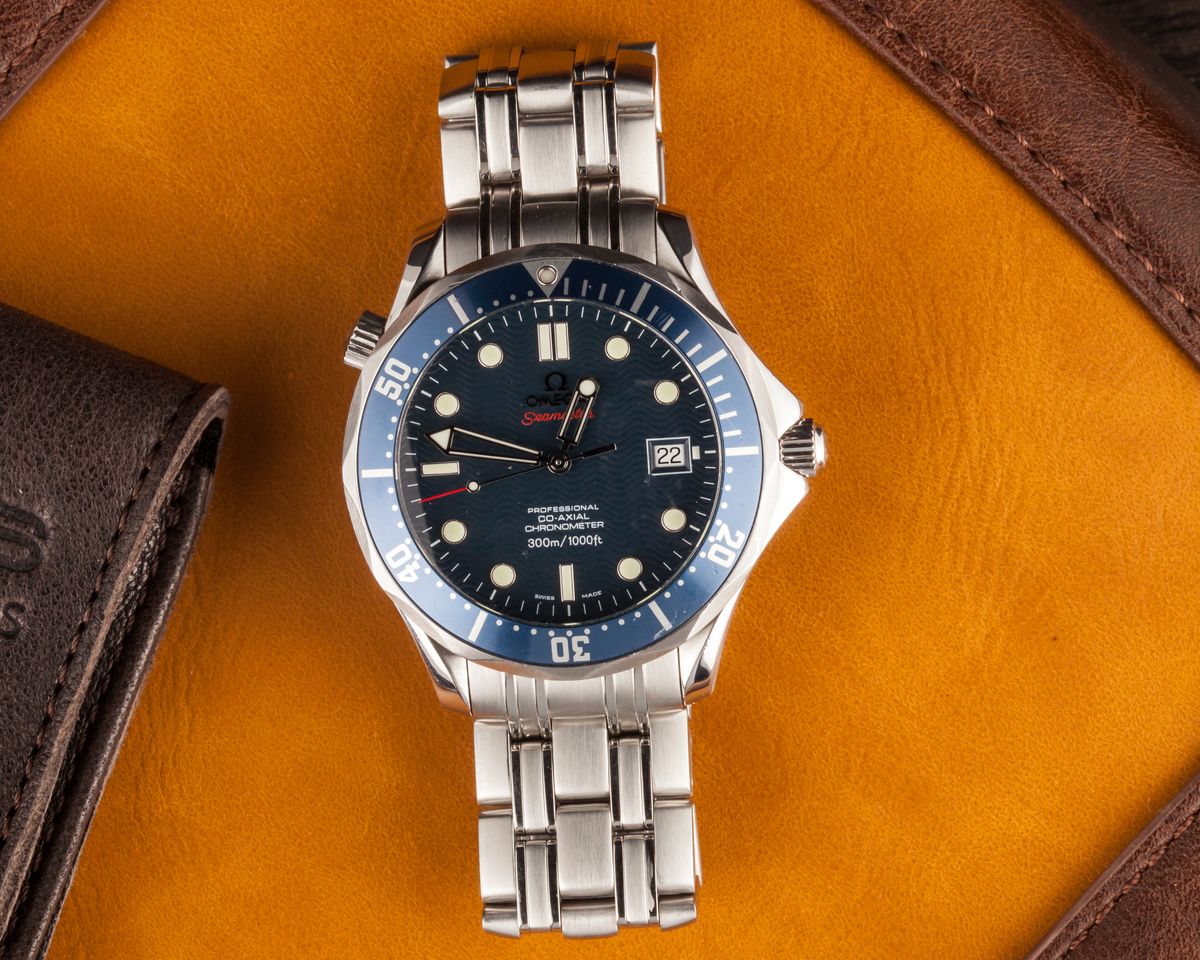 On the inside is where the biggest changes have taken place. The stainless steel and two-tone models are powered by the Omega in-house Cal. 8800, a METAS-certified (Swiss National Metrology Institute) Master Chronometer movement, featuring free-sprung balance and silicon hairspring. Impervious to magnetic fields up to 15,000 gauss, the 35-jewel movement beats at 25,200vph (which is considered the optimum frequency for the co-axial escapement) and it offers users a 55-hour reserve. Finished in Geneva waves, everything is visible through the sapphire caseback.

Two other movements have since made their way into the Omega Seamaster Diver 300M family. The titanium-tantalum model mentioned above uses the Cal. 8806 – the no-date version of the Cal. 8800, while the all-gold models introduced in 2019 (in either Sedna or yellow gold) are given the Cal. 8801 – essentially the same but with an 18K gold balance bridge and oscillating weight to add an extra touch of luxury. 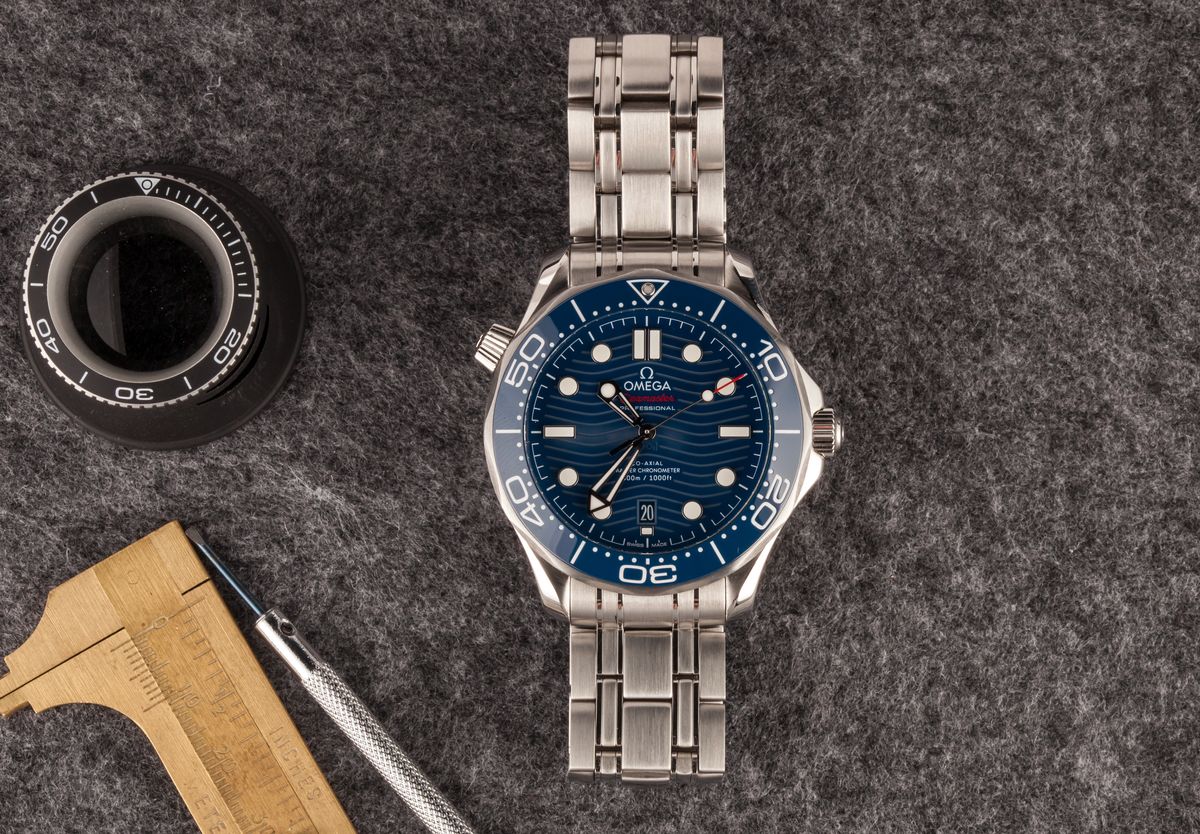 It won’t come as much of a shock that Omega has released a slew of special editions of the Seamaster Diver 300M (as well as others in the Seamaster range) over the years, mostly in tribute to their partnership with the  James Bond franchise.

The first Bond-edition Seamaster watch appeared in 2002 to celebrate the opening of Die Another Day, which also happened to coincide with the 40th anniversary of the Bond franchise. The watch featured a dial with a repeated 007 logo motif across it, as well as one applied above the six o’clock index. Limited to 10,007 pieces, it proved hugely popular with fans. The pattern has continued with each new movie debut, with either a Seamaster Diver 300M, Aqua Terra, or Planet Ocean receiving a unique Bond detail or two, such as the logo being used as the counterweight on the seconds hand on the Seamaster Planet Ocean ref. 2907.50.91. 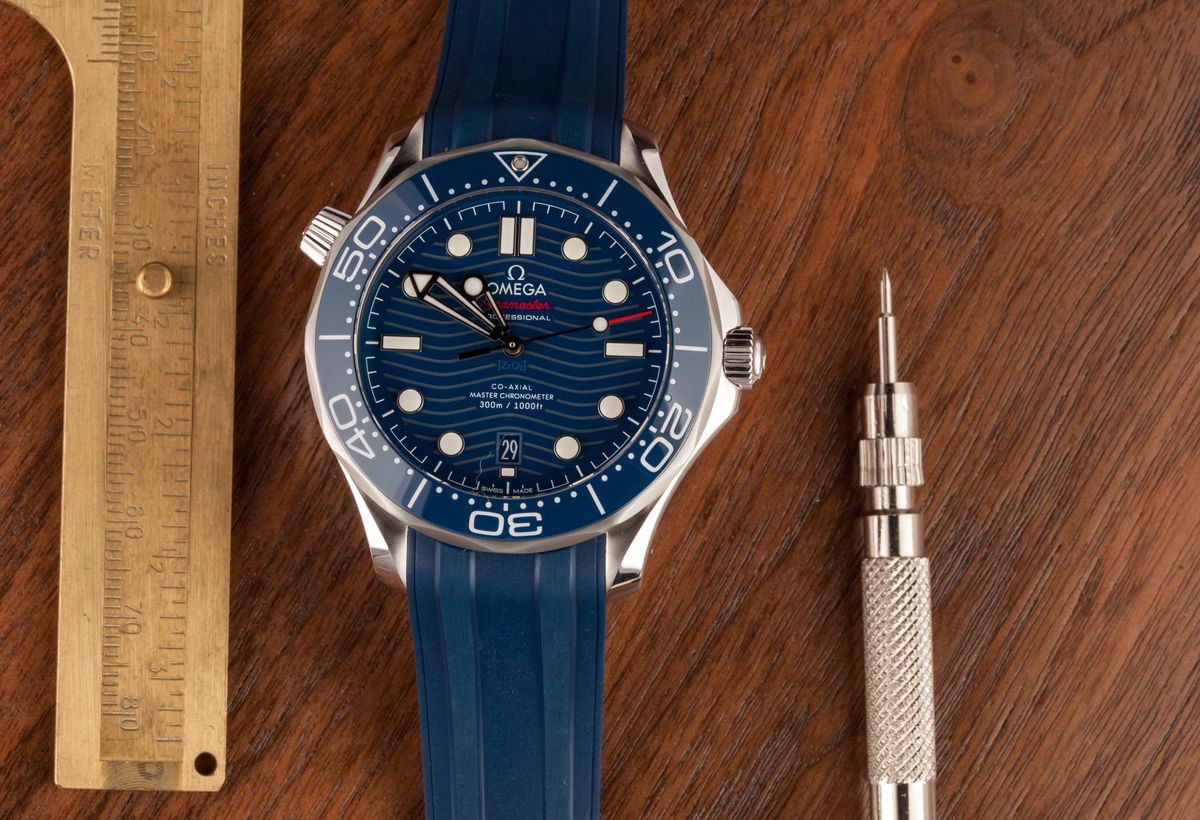 The two most recent 007 examples have been among the most admired. Last year’s timepiece to celebrate the 50th birthday of On Her Majesty’s Secret Service included a dial with spiral engravings made to look like the inside of a gun barrel, which is intended to be a tribute to the famous opening sequence used in every movie. The numbered edition was restricted to 7,007 watches.

Lastly, to accompany Bond on his latest adventure, No Time To Die (which is set to be released in November 2020), Omega has released the ref. 210.90.42.20.01.001. A beautifully realized (and non-limited) 007 edition, the latest Bond Seamaster has some intriguing vintage-inspired aesthetics, with a simulated patina on the bezel numerals and hour markers, and wrapped up in a titanium case with the option of either a NATO strap or matching titanium mesh bracelet. 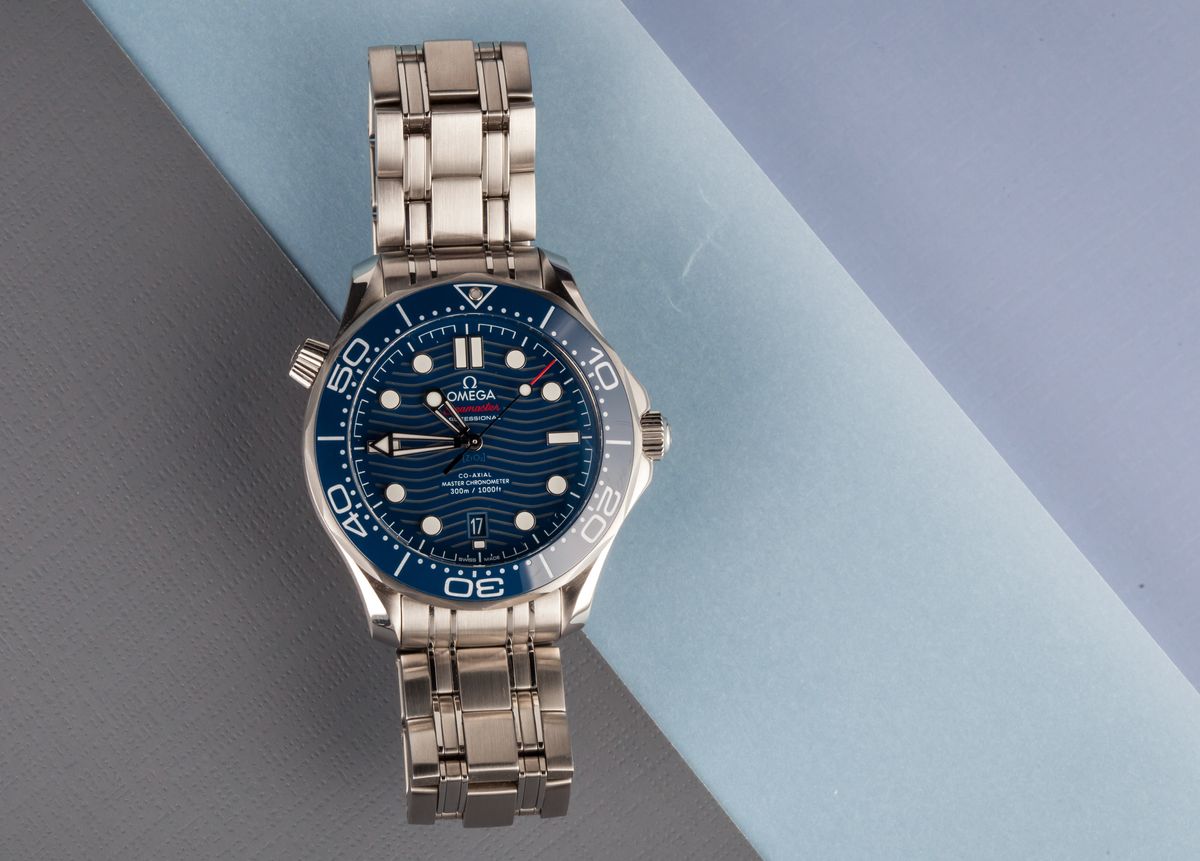 The Seamaster Diver 300M has been massively successful for Omega and continues to be among the brand’s biggest hitters. Its combination of great looks, extensive options, cutting-edge technology, and realistic pricing means that it ticks just about every box, whether you are new to the brand or an avid collector.

Best of all, it really can serve as that one good watch, never looking out of place in any situation, and easily tough enough to survive just about anything you can throw at it. There’s a reason 007 has remained such a loyal fan; the Omega Seamaster Diver 300M is simply a great watch and can effortlessly make the transition from wetsuit to three-piece suit without skipping a beat. 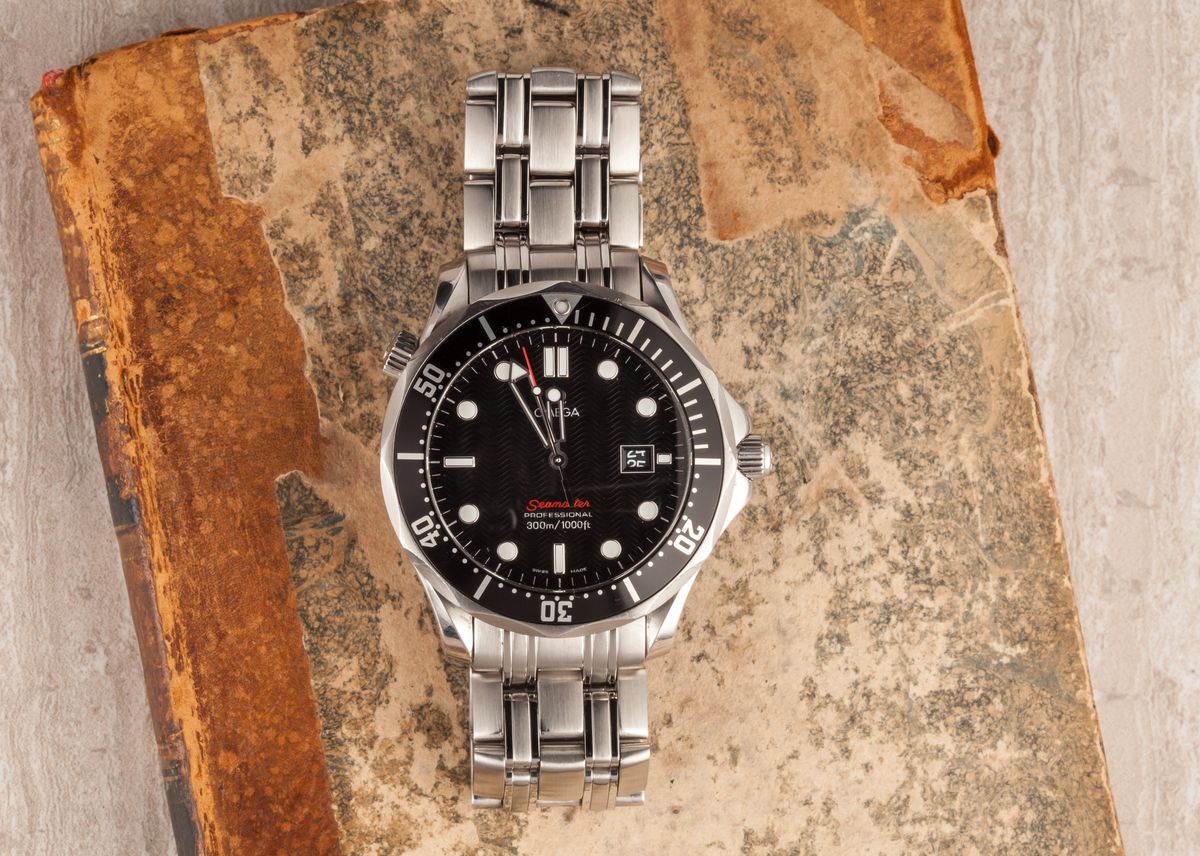