An all-new model slips out of the gates of the Rolex compound about as frequently as astrologers discover a new planet. After the 1964 launch of the Daytona, we had to wait an incredible 28 years before another one came along, in the shape of the Yacht-Master (with Rolex stretching the term ‘new’ to breaking point with what was basically a Submariner in a fancy suit).

By comparison, the next unique offering from the brand came along at a breakneck pace when, a mere 20 years later, the Sky-Dweller line debuted at Baselworld 2012.

Rolex rarely produces complicated watches but, what they introduced was one of the most sophisticatedly complex and yet functionally simple watches in their long and illustrious history. 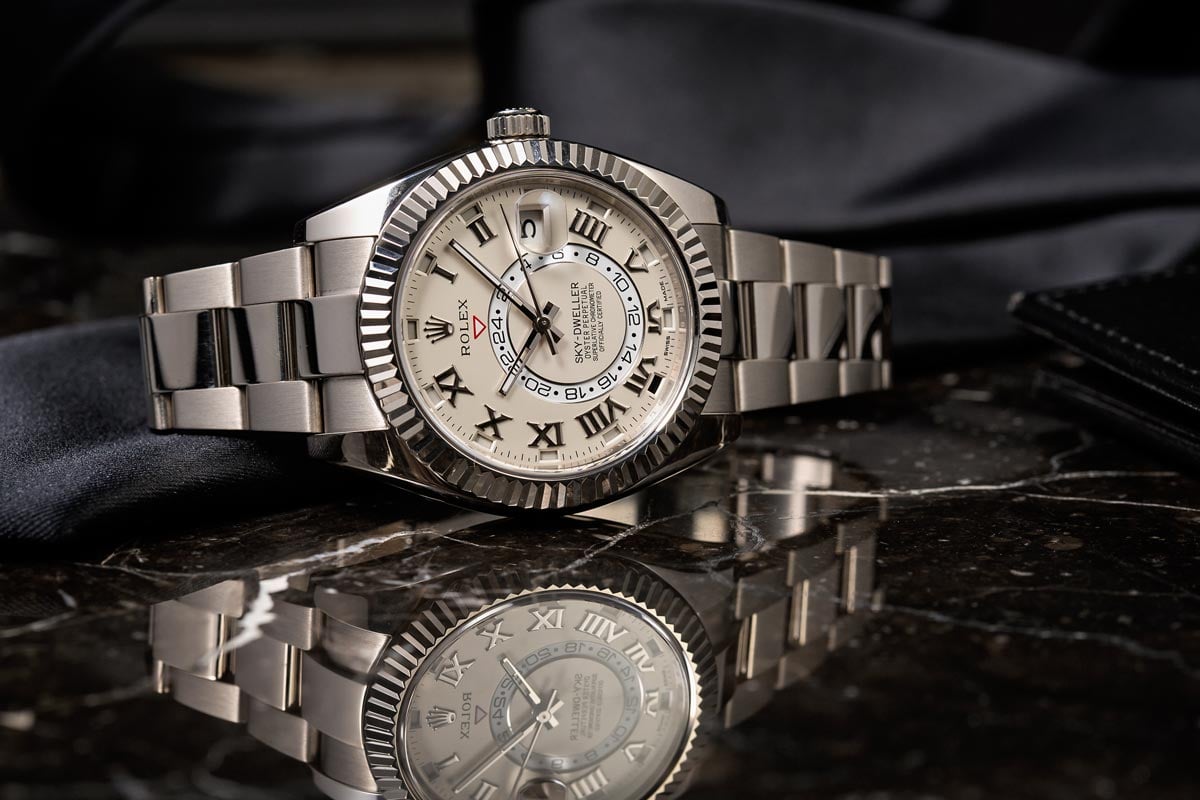 The Sky-Dweller ref. 326939 is a complex model with incredible technology inside the watch.

The look of the Sky-Dweller is revolutionary for a company that usually updates its well-tested and timeless designs at an almost glacial pace. Those three original models released in 2012, in yellow, Everose and white gold, are unlike any other timepiece in the Rolex lineup.

Described as the quintessential watch for world travelers, the combination of an annual calendar, along with the GMT indicator to track dual time zones, is designed to give globetrotters all the information they need at a glance, all with that discreetly understated Rolex flair.

To achieve it, Rolex built on the architecture and underlying technology first seen in the Yacht-Master II that appeared a few years prior. The Sky-Dweller is fitted with the second generation of the YMs innovative Ring Command Bezel, a multi-functional component integrated with the winding crown to control the watch’s various operations.

But where the Yacht-Master II had to rely on the addition of pushers to activate a number of its features, such as the on-the-fly synchronization, the Sky-Dweller’s pioneering three-position bezel does away with the need for any extra buttons, leaving the watch with more elegant, minimalistic lines.

Powering everything, inside is a brand new caliber, the 9001. With 380 separate parts, it’s the most intricate and complex movement Rolex has ever engineered and also the second most highly jeweled. It controls the first annual calendar complication from the Swiss watchmaker, known as SAROS after the Greek term for the 18 year cycle of the sun, Earth and moon. It’s a simple yet brilliantly intelligent mechanism that compensates for the months with 30 and 31 days and only requires resetting once a year, at the end of February (Blame the Romans).

Along with the staggering part count, sixty of which are utilized by the bezel alone, the Cal. 9001 is fitted with everything we’ve come to expect from a modern Rolex. COSC certified, the in-house movement features the Parachrom bleu hairspring and Paraflex shock absorption, and has a 72-hour power reserve. 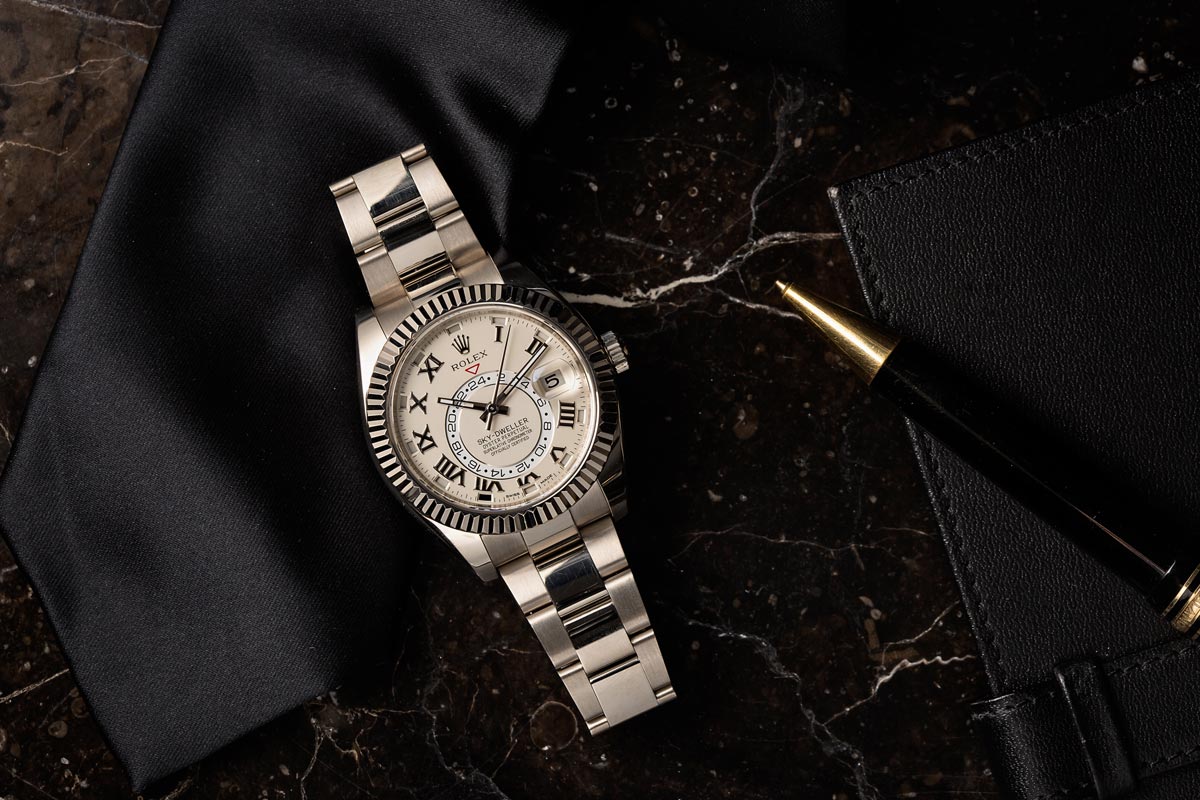 The Sky-Dweller ref. 326939 is a watch perfect for the traveling man.

While most certainly useful and definitely impressive, the thing about watches with complications is, they tend to be, well, complicated. It’s one of the reasons Rolex’s catalog is conspicuously low on models with additional functionality. As a brand, they have always stuck to doing the simple things better than anyone else, and leaving the complex gimmicks to others.

However, when they do decide to jump in, it’s with typical Rolex panache. The Sky-Dweller is an imposingly complicated timepiece, yet its operation, and its legibility, are stunning in their simplicity.

The Ring Command is, of course, the key. Each quarter turn of the fluted bezel unlocks a different action. From the start location, the first counter-clockwise position allows you to adjust the date in the three o’clock window, forwards or backwards. Another quarter turn gives you independent control over the center hour hand. And in the final position, all of the functions synch and you can set the reference time in the 24-hour GMT disk.

All this is achieved with just the winding crown, which itself only has one position. As an example of mechanical sophistication, it’s hard to beat.

The Sky-Dweller series, all housed in 42mm cases, follow the recent trend from Rolex for larger watch sizes, and with its widely spaced lugs, it feels even bigger.

Of the three precious metal references introduced in 2012, the 18k white gold ref. 326939 became the most sought after, but for many fans, any version of the watch remains an acquired taste. It’s the distinctive dial that has split the most opinion and caused the most controversy, specifically that open GMT display.

While arguably easier to read than their other dual time zone pieces, the GMT-Master II and the Explorer II, the off-center 24-hour dial is a big departure from the Rolex norm. Against the ivory satin of the 326939, the white of the sub dial is a subtle feature, adding to that variant’s more versatile appeal. Compared to the Everose and yellow gold offerings, the white gold model has a more go-with-anything aesthetic. 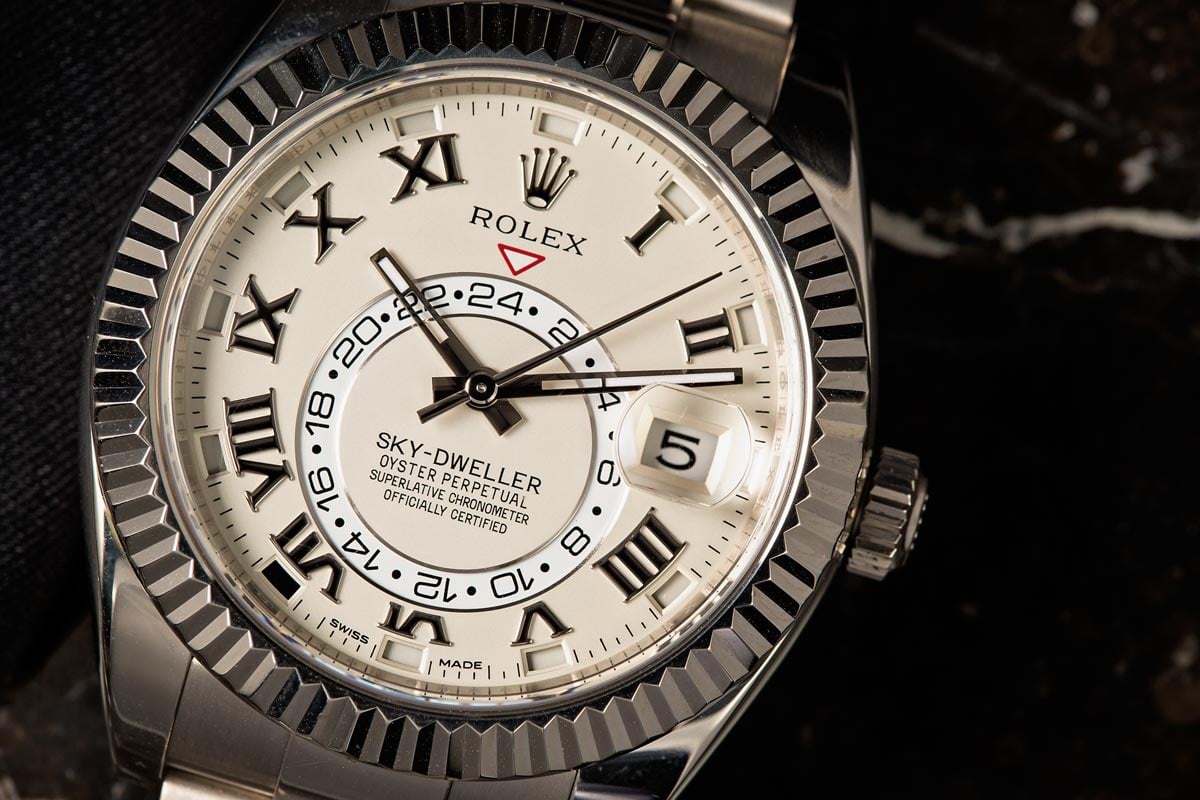 The face of the watch tells you much more than just time.

The only pop of color in the otherwise completely monochrome face is in the inverted red triangle above the disk, indicating the hour back home while you’re on your travels.

A small aperture above each of the hour markers indicates the month. Fortunately, there are as many months of the year as there are hours in the day, so on the Sky-Dweller, a black window over the 12 o’clock tells you it’s December, 1 o’clock is January, etc. The high contrast makes it supremely easy to read. The date is connected to the local time, set on the main center hands, and changes instantaneously at midnight.

On the run up to its introduction a few years ago, many of the brand faithful were deliberating over the name Sky-Dweller and trying to imagine what Rolex had up their sleeves for their first new offering in a generation. Much of the talk was of a big brother for the GMT-Master II, an aviator’s watch for serious professionals in the same mold as the Sea Dweller versus the Submariner.

What emerged instead was one of the most complicated, and most expensive, watches Rolex has ever produced, proving once and for all that it’s not worth trying to second guess the world’s biggest watchmaker.

The Sky-Dweller’s challenging design may split opinion, but its mechanical brilliance and the simplicity in its use make it the ultimate GMT.