Tudor Watches: A Closer Look at the North Flag

Let’s be honest: the North Flag has gone by the wayside the past few years. With a unique and modern design, it’s quite drastically different from the ever-popular Tudor Heritage collection that everyone is infatuated with at the moment. But, that shouldn’t make this model any less impressive and important, as it is a true standout among the various Tudor watches currently in production. So today, we’re taking a closer look at the North Flag and why you should care about this sporty timepiece. 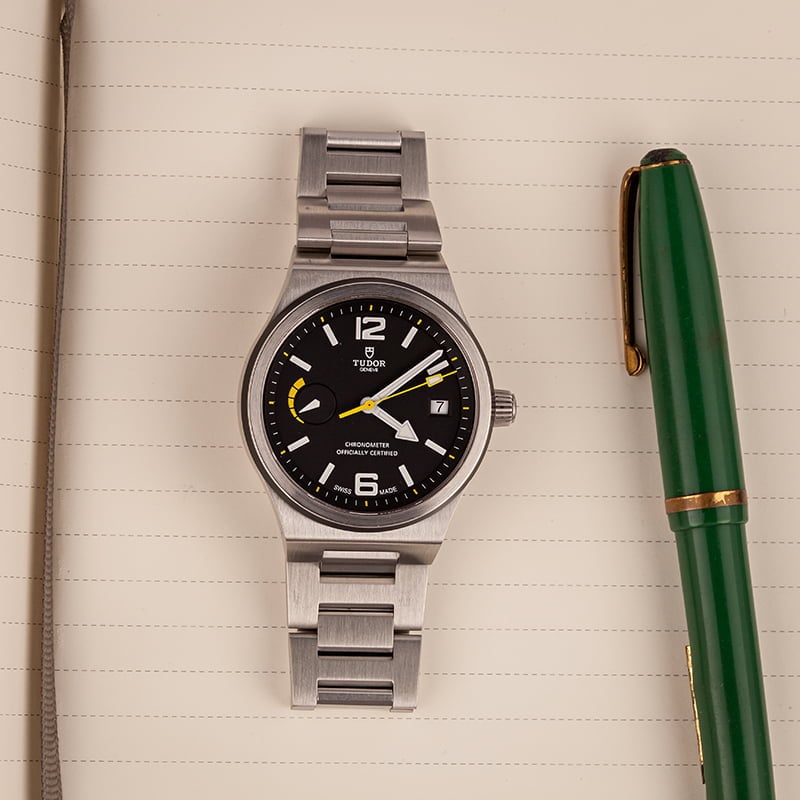 The North Flag Was a Turning Point for Tudor Watches

When the North Flag was released in 2015, it was a big deal. Not only did this watch feature impressive new features like Tudor’s first-ever in-house movement and their first exhibition caseback to show it off, but it was also the first watch in years that was an entirely new entity. The North Flag wasn’t another dive watch, it wasn’t a heritage-inspired Back Bay, and it wasn’t like any of the other Tudor watches currently available. The North Flag was something completely different.

However, as we’d later learn, despite being a thoroughly modern timepiece, the Tudor North Flag actually has its roots in Tudor’s vintage catalog – its design is directly linked to the Tudor Ranger II of the 1970s. What Tudor did – remarkably elegantly – was pull direct inspiration from their own collection while making it feel totally contemporary and fresh. And that’s something well love about Tudor watches, isn’t it? 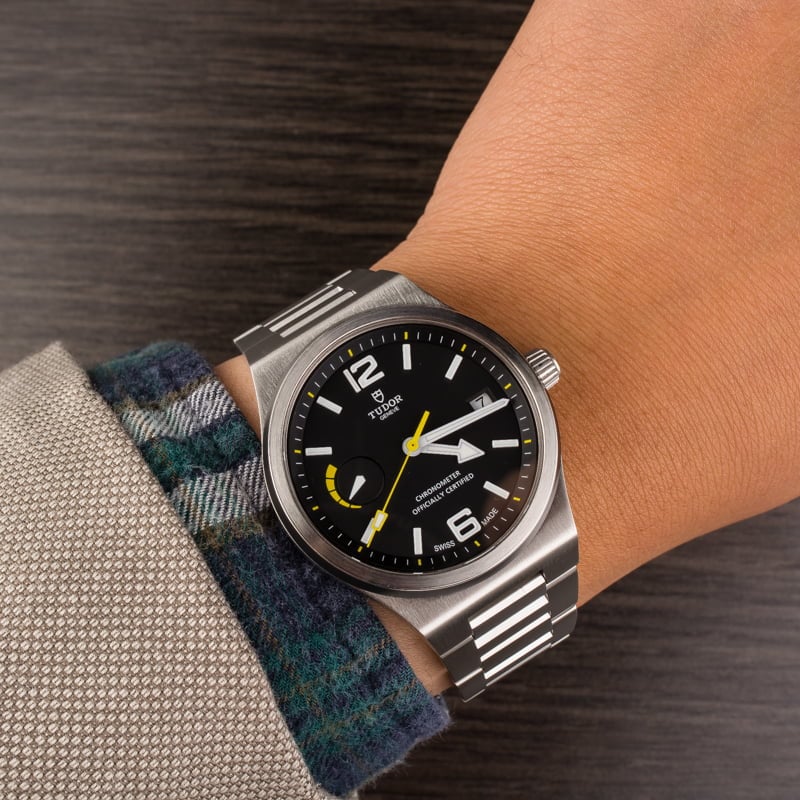 While that striking dial might be what initially attracts you to this unique Tudor model, the case of the North Flag is incredibly sophisticated. What the North Flag did was position itself as a luxury sports watch, featuring elements like amazingly clean lines – incredibly angular and almost razor-sharp around the edges. Of course, as we mentioned above, there’s also that display caseback that totally elevates the look.

The Tudor North Flag also has integrated lugs that make it feel totally unique, as well as being a callback to the distinctive 70’s shape we get from the Ranger II. No detail was spared here either, the tapered crown even getting some fine detail attention. Finally, there’s that smooth bezel which not only features clean lines in stainless steel but also a scratch-resistant and high-tech ceramic ring around the outer edge. Water-resistant to 100m, the case of the North Flag remains unmistakably modern, despite drawing inspiration from a vintage model from the 1970s. 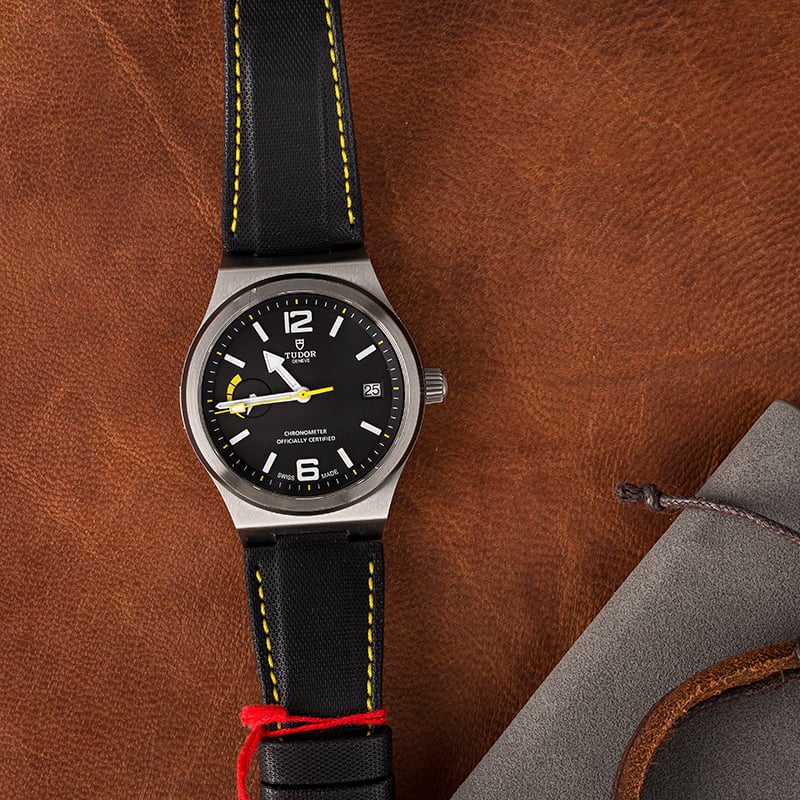 Now we’ll circle back to that dial, which is distinctly dark yet incredibly legible with a modern and minimalist feel to it. While this dial only has two Arabic numerals (at 12 and 6 o’clock) they’re purposefully large and dominate the dial. The rest of the hour markers are rectangular, also applied and coated in white lume for high-visibility in the dark. At the 3 o’clock location, you’ll see the date in a small rectangular window, and at the 9 o’clock position, there is a bright yellow power reserve indicator.

Interestingly, the power reserve works as a rotating disc, adding another element of modernity to this watch. You’ll see Tudor incorporated the punchy yellow around the dial as well, in both the minute markers above the hour markers as well as on the thin second hand with its rectangular tip. 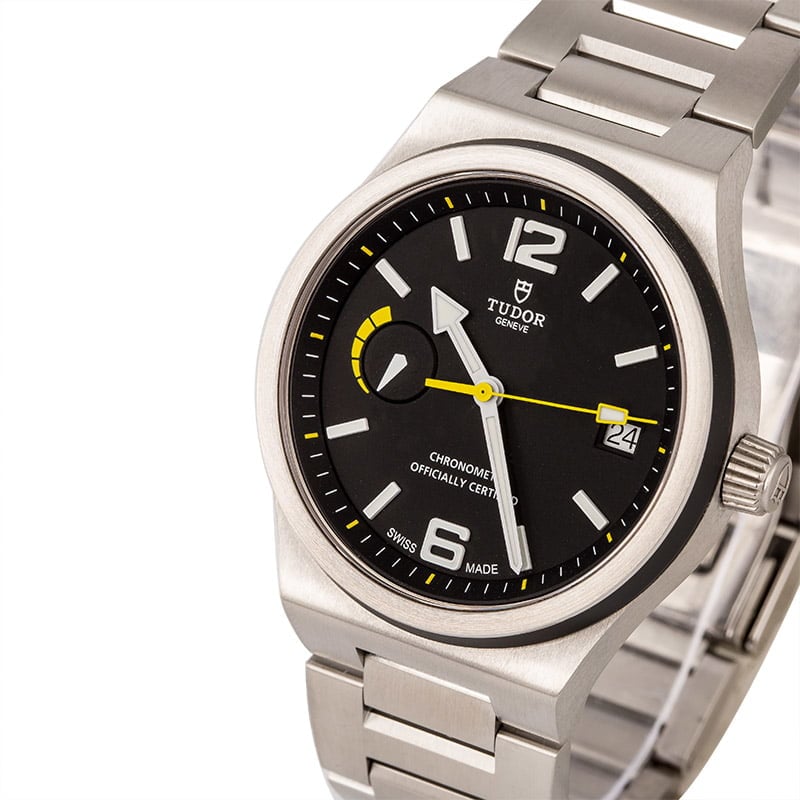 Although the design is certainly worth discussing, it is the movement inside this watch that is the real showstopper. The aesthetics are a refreshing and important decision from the Tudor brand, but the fact that they used this watch to debut their first in-house movement is just as important. The reason why this is so important is that the entire Tudor brand was originally built on third-party movements – to finally manufacture their own caliber shows a real turning point, not only in their market position but also in terms of their brand identity.

Back to the movement itself, the Calibre MT5621is quite impressive for Tudor’s first in-house design. It’s an automatic movement featuring a bidirectional winding system with an anti-magnetic silicon hairspring, 4Hz beat-rate, and variable inertia oscillator. It also boasts an impressive COSC certification and a 70-hour power reserve. Overall, the North Flag is impressive, whether you look at the uniqueness of the case and dial or the technology of its movement. We hope that next time you’re browsing Tudor watches you’ll give the North Flag a second glance, as it is easily one of the unsung heroes from the brand’s catalog, and offers tremendous value for money. 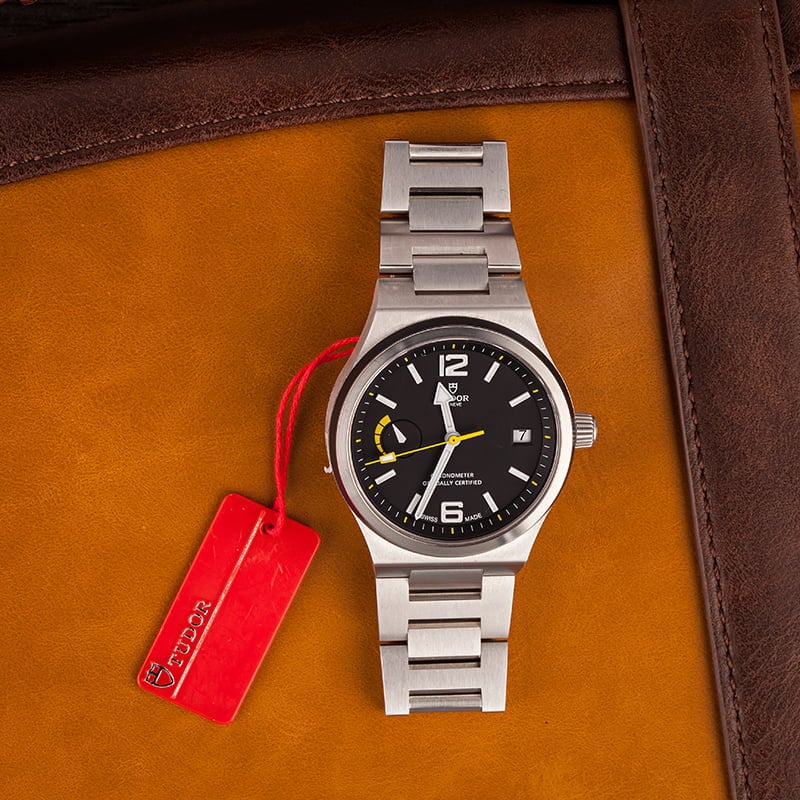