First released in 1971, the Explorer II is a sleek and rugged sports watch that offers additional functionality over the original model. One of the trademark features associated with the Explorer 2 is the 24-hour hand to display either am/pm or a second time zone, often appearing as a bright orange 4th hand. 2020 update: suggested retail prices start at $8,350. Shop all models for sale by visiting our used Rolex watches page.

This Page Contains Information About:

About the Rolex Explorer II

In 1953, Rolex unveiled the Oyster Perpetual Explorer watch to honor the achievement of Sir Edmond Hillary and Tenzig Norgay, when they became the first humans to successfully reach the summit of Mount Everest. Designed as a tough timepiece for adventurers and built to be highly resistant to extreme conditions, the original Explorer featured a durable exterior fashioned from stainless steel, a highly legible dial with luminous details, and a shock-resistant self-winding mechanical movement.

Building upon the success of the original Explorer watch, Rolex introduced the Oyster Perpetual Explorer II in 1971 as a bigger, bolder, and more complex timepiece than its predecessor. Thanks to its date complication and prominent AM/PM indicator displayed by a 24-hour hand pointing to a fixed 24-hour bezel, the Rolex Explorer II was positioned as a tool watch for speleologists, volcanologists, polar explorers and any other adventurers who spend extended periods in darkness and can't depend on the sun to tell night from day.

Whether for polar, mountaineering, or caving expeditions - or as an everyday luxury watch with fantastic durability and a highly useful set of features, the Rolex Explorer II is one of the most adventure-worthy Rolex models within the Oyster collection.

The history of the Rolex Explorer II began in 1971 with the launch of Explorer II ref. 1655 featuring a 39mm stainless steel case, a date display, a bright orange 24-hour hand, a fixed bezel with 24-hour graduations, and a stainless steel Oyster bracelet. Originally designed to help cave explorers and other individuals working in complete darkness, the arrow shaped 24-hour hand (which is coupled to the traditional 12-hour hand) serves as a prominent day/night indicator by pointing to the current hour on the 24-hour scale engraved into the fixed bezel.

Far from the simple design of the original Explorer, the Explorer II 1655 featured 24 lume plots on its dial for optimal legibility of its 24-hour scale in the dark. Many buyers criticized the first Explorer's dial, citing that it was difficult to read; however in reality, the dial of the ref. 1655 was intended to be useful both as a 12-hour dial and a 24-hour dial for use with its prominent 24-hour hand. Due to the distinct shape of its defining 24-hour hand, the Explorer II ref. 1655 was nicknamed "Freccione" - a name derived from the Italian word for "arrow."

These early Rolex Explorer II 1655 watches are nicknamed the 'Steve McQueen' Explorer models, but the famous Hollywood actor never actually wore an Explorer II in real life or in the movies. McQueen famously wore a Submariner in his personal life, and a number of other watches in various films; however no photo exists of Steve McQueen wearing an Explorer II watch. The actor's image was being used in Rolex marketing materials around the time of the Explorer II's release, and so the nickname came about; however it is believed that McQueen never once actually wore a Rolex Explorer II.

In the mid-1980s, Rolex replaced the reference 1655 with the Explorer II ref. 16550, which increased the case diameter of the Explorer II to 40mm but kept the classic Oyster bracelet. With an overall design that more closely resembled a GMT-Master II with a stainless steel bezel, the reference 16550 featured a dial layout with Mercedes-style hands and geometric-shaped hour markers (similar to most Rolex Professional Oyster watches), and a red 24-hour hand with a luminous arrow tip.

Additionally, the new Calibre 3085 movement allowed the 24-hour hand to be set independently of the 12-hour hand, turning the Rolex Explorer II into a dual time watch. By the end of the 1980s, Rolex released Explorer II ref. 16570 with the updated Calibre 3185 movement. From this point forward, the Rolex Explorer II collection possessed the same core functionality of a GMT watch, despite not having a rotating bezel.

In 2011, to celebrate the 40th anniversary of the Explorer II, Rolex introduced the larger 42mm Explorer II ref. 216570 featuring the Calibre 3187 movement with Rolex's high performance Paraflex shock absorbers. This larger Explorer II edition marked the first time that an Explorer or Explorer II watch had been offered with a case diameter above 40mm, and helped to further differentiate it from the 40mm GMT-Master II collection.

Additionally, the reference 216570 also marked the return of the bright orange 24-hour hand from the previous model, and also added a small additional splash of orange in the "Explorer II" name on the surface of the dial. Despite its vintage inspiration, the dials style remained similar to the previous generation of Explorer II watches - now with larger hands, bigger hour markers, and a splash of orange text on the dial - along with the choice of either black or white "polar" dials. 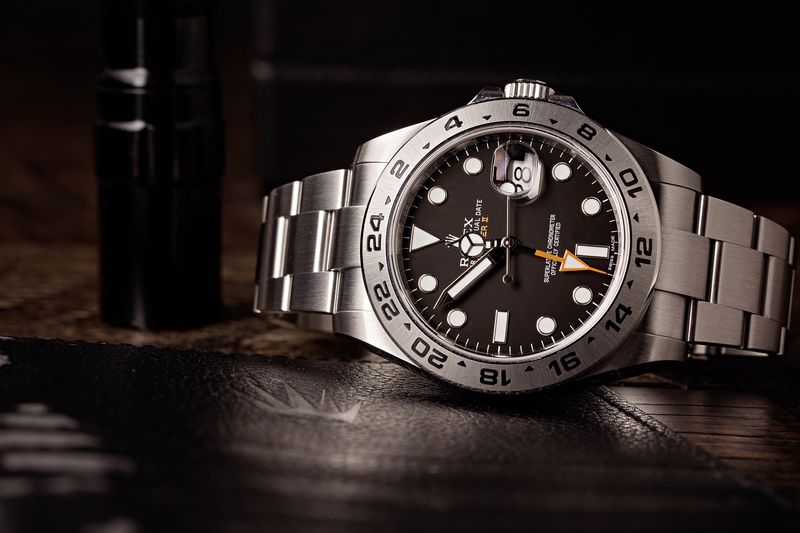 How Much Is A Rolex Explorer II?

Part of the appeal of the Rolex Explorer II is its high degree of functionality that it provides while still adhering to a relatively accessible price point compared to other Rolex Oyster Professional watches. With a rock-solid build, a date complication, and dual time functionality, the Explorer II offers a lot of practicality yet remains one of the more modestly-priced sports watches in the Rolex catalog.

Generally speaking, due to its larger size and more advanced functionality, the Explorer II is priced higher than the standard Rolex Explorer. However, the exception to this is the rare and collectible vintage Rolex Explorer references from the 1950s and 1960s, which can easily be worth tens of thousands of dollars, and are fiercely sought-after by vintage collectors.

The latest Rolex Explorer II models retail for $8,350 as of 2020, while older references can be purchased anywhere from around $6,200 to $8,500 on the secondary market. However, if we're talking about vintage ref. 1655 watches with rare dial variations, the Rolex Explorer II price range can quickly skyrocket well into the five-figure territory for well preserved examples.

From the very first Rolex Explorer models of the 1950s to the 42mm dual time Explorer II watches of today, exploration has been a part of Rolex's story for well over 80 years.

Throughout its production period, the Rolex Explorer II has grown from 39mm to 42mm in size, and has existed in a number of different references. 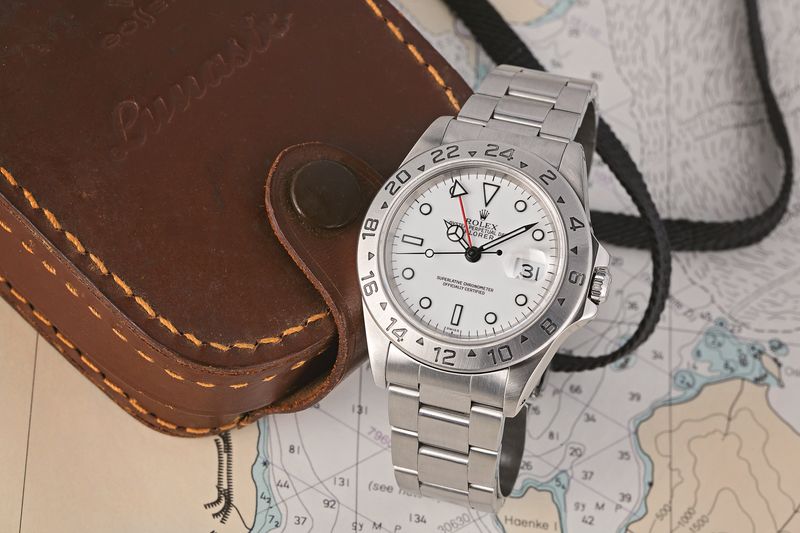 While it is not a watch specifically intended for aquatic use, the Explorer II is still guaranteed waterproof to 100 meters (330 ft). This water resistance is achieved by the use of Rolex's Twinlock winding crown, which features two sealed zones for increased protection against moisture intrusion.

While the dial of the original Rolex Explorer has remained largely unchanged, the dial of the Explorer II has changed more dramatically throughout the decades. The first iteration of the Explorer II, the reference 1655, was only available with a matte black dial and featured a prominent minute track with 24 lume plots to better correspond with its 24-hour display. Future Explorer II references offered the option of a white dial or a more traditional black dial, with the white Explorer II dials earning the "Polar" nickname due to their crisp coloring. Additionally, this second generation of Explorer II watches also brought with it a change to lume-filled geometric indexes with white gold surrounds - similar to the style of dial used on the Submariner, GMT-Master, and Sea-Dweller.

Much like other aspects of the watch, the luminescence used on the Explorer II evolved over the years, from radium to tritium (both radioactive materials), before moving onto photoluminescent materials such as LumiNova to Super-LumiNova. Today, the latest Explorer II references all use Chromalight on their hour markers and hands, which is Rolex's in-house luminescent material that emits a bright blue glow instead of green.

The Explorer II is a dual time watch with a date window, the one exception being the ref 1655, which had an AM/PM indicator as its 24-hour hand. The latest movement used to power the Explorer Ii inside the current-production reference 216470 is the Caliber 3187 that features Rolex blue Parachrom hairspring, which provides better resistance to magnetism and temperature variation, along with Rolex's new Paraflex shock absorbers for improved shock resistance and stability. Additionally, since 2015 Rolex mechanical movements boast an accuracy rating of -2/+2 seconds per day, which significantly exceeds the standards for COSC-rated chronometers.

Who Wears The Rolex Explorer 2?

While the Rolex Explorer II was originally designed for cave explorers working in total darkness, its durable, full stainless steel construction and useful feature-set have made it a popular favorite among everyone from actors and celebrities to adventurers and military personnel. 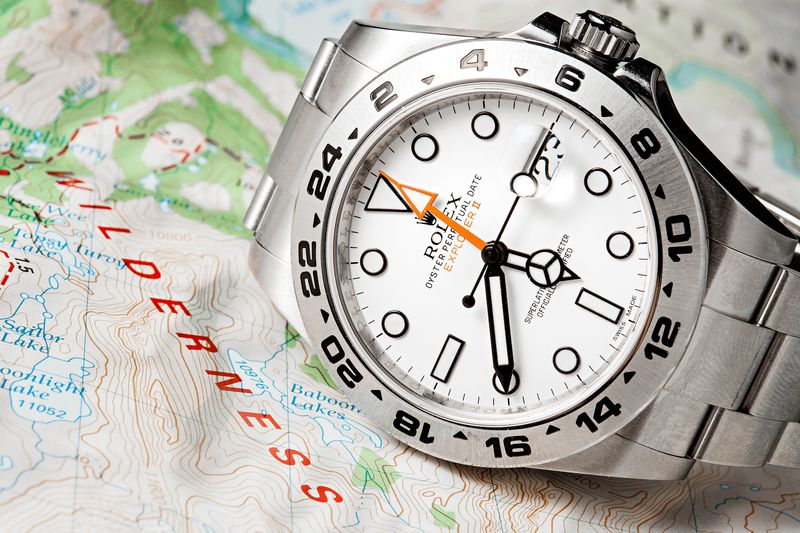 While the Rolex Explorer II may not be as popular as some of Rolex's other sports watches like the Submariner and Daytona, there are still a number of famous individuals that embrace this tool watch dedicated to exploration.

Additionally, the Explorer II 1655 is nicknamed "Steve McQueen" but there's no evidence that the famous actor ever wore one. Instead, it is believed that the nickname came about as a result of a Rolex advertising campaign that featured McQueen around the same time; however even in the advertisements, the famous Hollywood actor is not wearing actually wearing a Rolex Explorer II watch.

Many collectors refer to the Explorer 16550 as a "transitional" model because it bridges the gap between the vintage "Steve McQueen" ref. 1655 and the popular ref. 16570. Part of what makes it so important to the Explorer series is that the ref. 16550 was the first edition to feature a 40mm case and sapphire crystal. It also introduced independently adjustable hour hands to the series thanks to its Cal. 3085 movement.

However, the most notable upgrade came in the form of the dial, which replaced the stick hour markers and straight hands with the traditional baton, circle, and triangle hour markers and Mercedes-style hands configuration that we're all used to seeing today.

The reference 16550 remained in production between 1985 and 1989 before it was discontinued and replaced with the long-running reference 16570, which remained in production until 2011. Powering the 16570 was a new pair of movements, the Cal. 3185 and then later Cal. 3186. The dial featured either Tritium, LumiNova, or Super-LumiNova plots during its long production run. Additionally, the dial was produced in either white "Polar" or black, with the white version featuring unique, black-trimmed hour markers set against a striking white dial.

Will The Rolex Explorer II Go Up In Value?

When Did The Rolex Explorer II Come Out?

Is The Rolex Explorer II A GMT Watch?

How To Set A Rolex Explorer II

Is The Rolex Explorer II Waterproof? 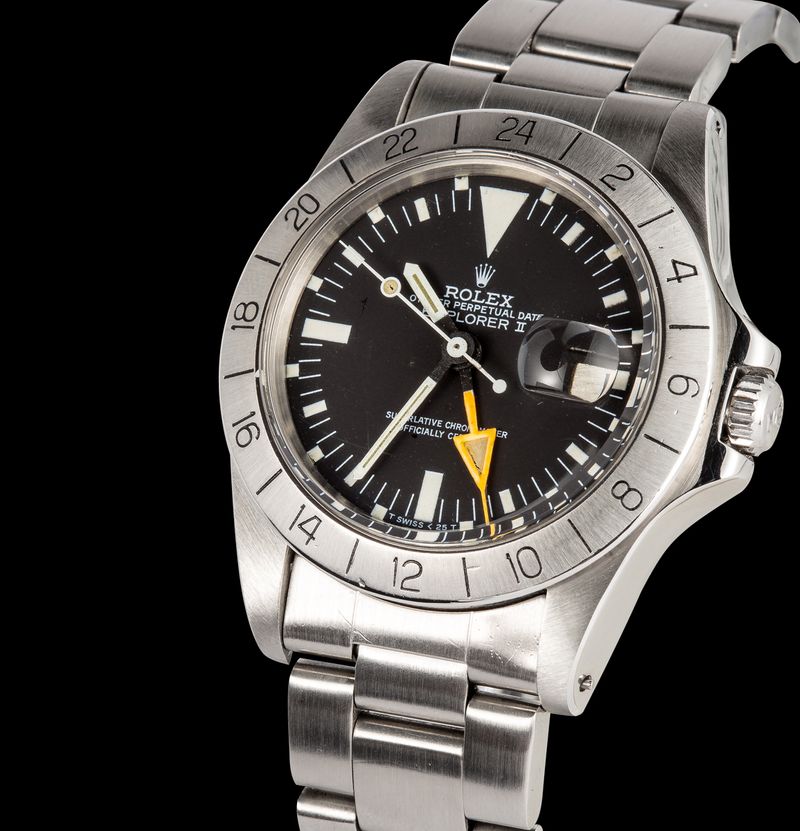