How To Use an OMEGA Speedmaster

The Omega Speedmaster is one of the world’s most iconic watches. You know all about its history because it was the first watch that went to the moon, and most collectors can spot that dial and bezel from a mile away. But when it comes to actually taking full advantage of the functionality on the Omega Speedmaster, there’s no shame in saying you just don’t know how it works. Don't worry, it's actually much easier than you think, so let’s get started!

Click here to learn more about the different types of OMEGA Speedmaster watches.

What is a tachymeter scale?

A tachymeter is used to measure both speed and distance. And on the Speedmaster, you can read the tachymeter scale on the bezel. Nope, those aren't just random numbers! In fact, they are graduated from 500 to 60 - the numbers representing either kilometers or miles, whatever units of measurement you prefer to use. 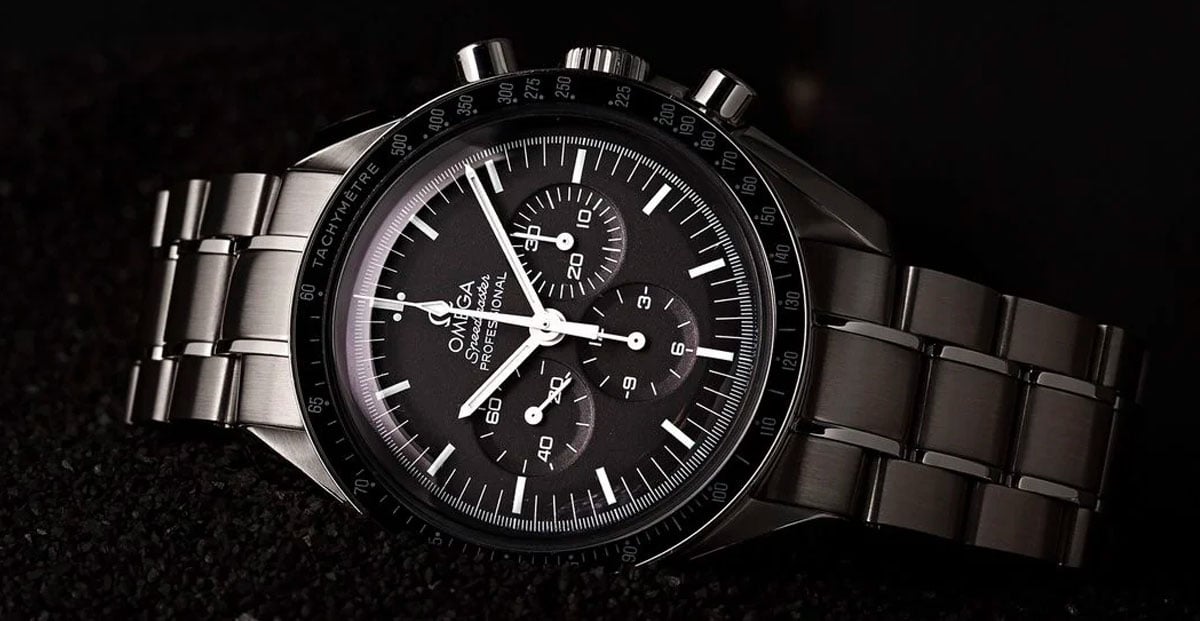 On the face of the classic Speedmaster Professional Moonwatch, you'll find three sub-dials. The first, situated at 3 o'clock is a thirty minute scale. The second, at 6 o'clock, is a twelve-hour counter. The last, over at 9 o'clock, is a running seconds indicator. The seconds hand for the chronograph - which is centrally mounted, rather than being displayed within a sub-dial - is large, pointed, and thinner than the hour and minute hands, and it gets used in conjunction with the tachymeter scale to calculate distance or speed.

While the Omega Speedmaster is famous for its use in space, the chronograph complication is also widely associated with motorsport. If you’re into that scene, the Omega Speedmaster will prove quite useful as you can use its functions to track various stats from the stands, such as the car’s average speed, distance, or lap time.

To figure out the speed, use the same steps as stated above. First, choose a point of reference on the track. As the car passes that point, activate the top pusher. When the car makes its way back to the same marker, stop the chronograph by pushing the top pusher again. The car’s speed will be displayed on the Tachymeter bezel via the central chronograph second hand. The chronograph’s stopwatch function will also be activated during this time and can also be utilized to time the race car in elapsed hours, minutes, or seconds. 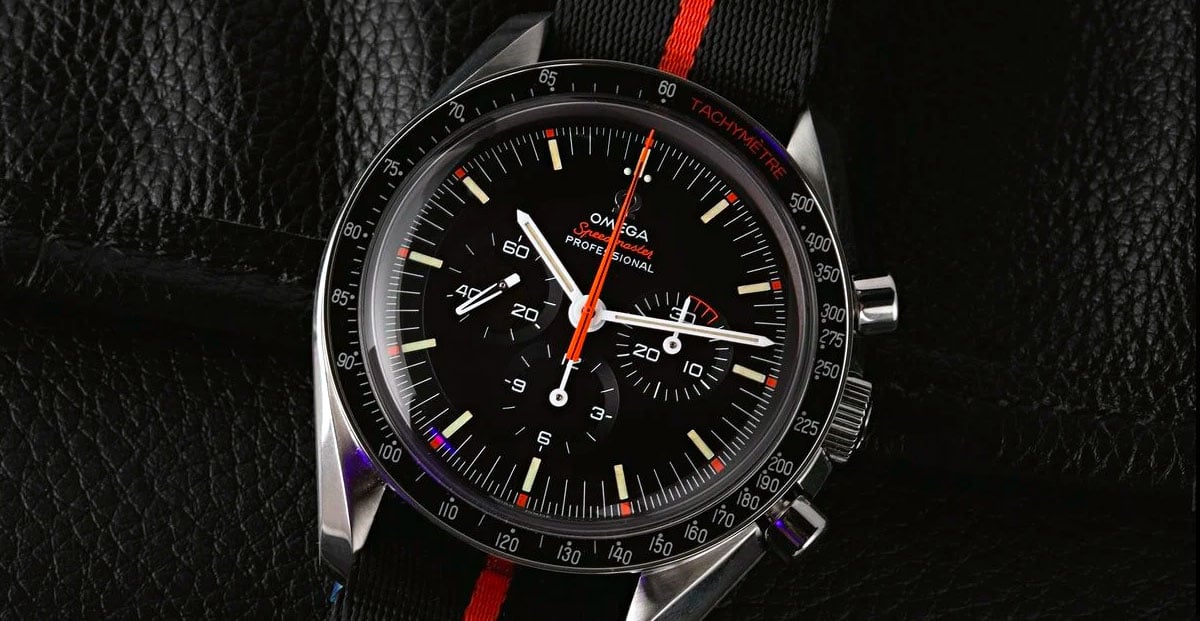 How do I use the stopwatch?

You can time something up to twelve hours with the Omega Speedmaster chronograph. All you have to do to start the timer is press the top pusher, located at two o'clock, in. This will start the seconds hand. To stop it, press the top pusher again. To reset the chronograph, press the lower pusher, located at four o'clock. This is how standard chronograph watches operate, and the same instructions can be used for operating the stopwatch feature on other watches like the Rolex Daytona. 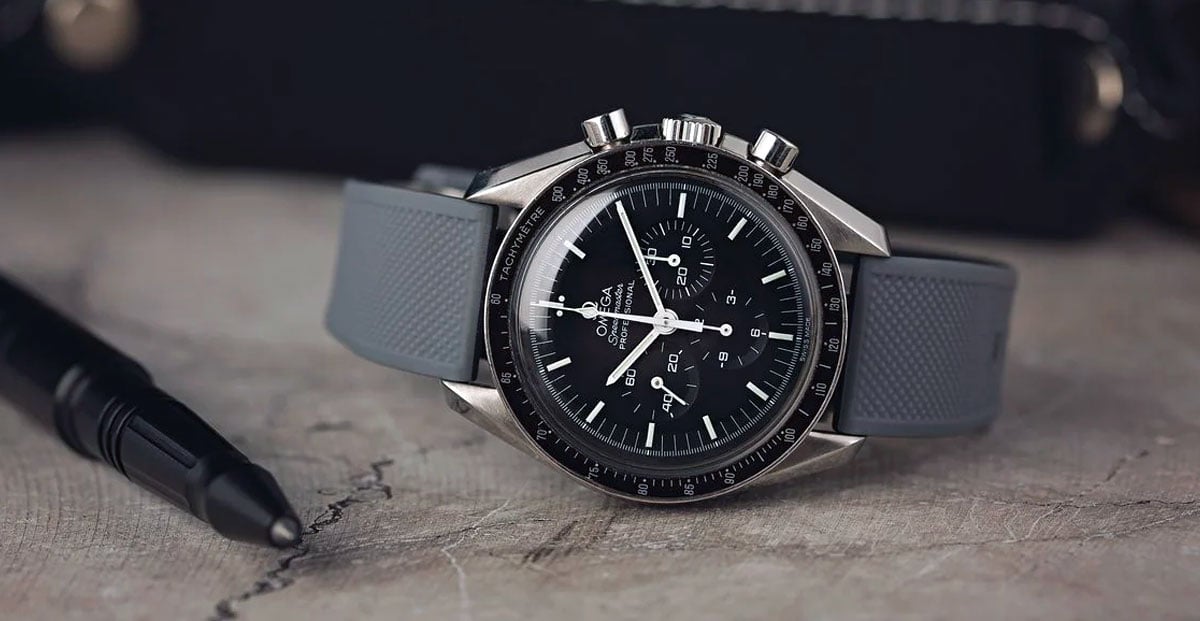 How do I figure out speed and distance with my Omega Speedmaster?

Now, the Speedmaster's tachymeter functionality is based on basic math. And if you wanted to use algebra, the equation to do so would be T=3600/t. The 'T' is the tachymeter scale value, the 't' is the elapsed time and 3600 is the number of seconds in an hour. You could use this to figure out your speed and distance. But why do that when you have a handy Speedmaster strapped to your wrist?

The first thing to do is figure out what you'll be measuring – kilometers or miles. Then, you're going to want to make sure you have an accurate representation of distance, for example, the mile markers on the highway. This is necessary so that you can accurately stop and start your watch over a mile or kilometer distance. 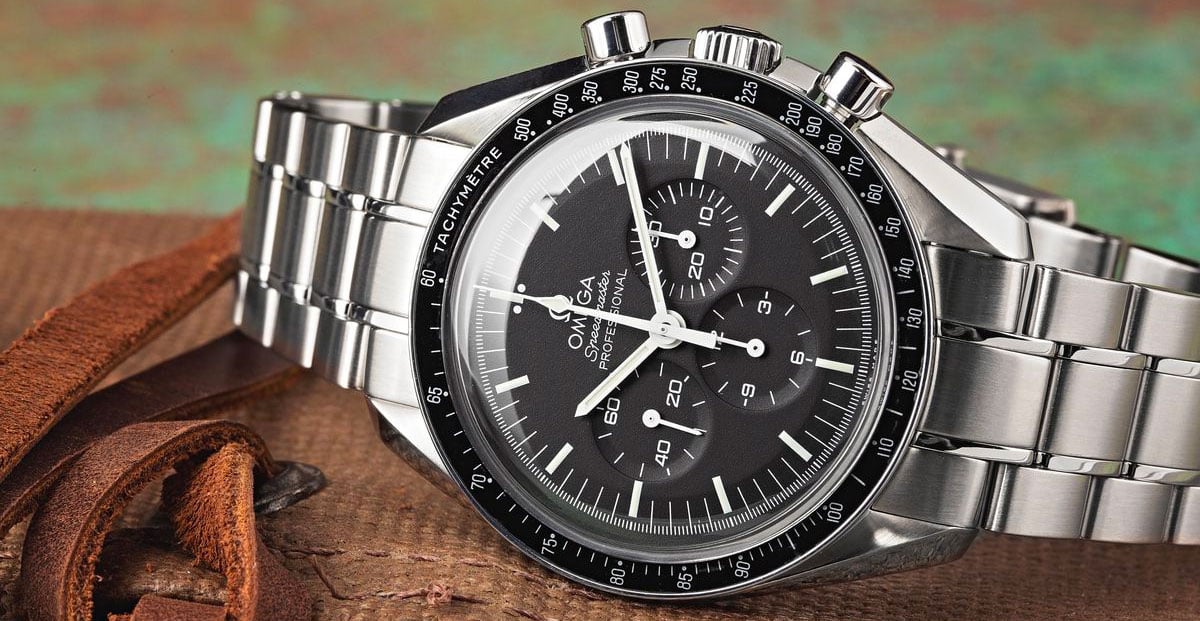 How to Time a Race Car with The Tachymeter Dial

The same technique can be applied while in your car. For example, let's say that you're on a road trip, and you’re curious about your average speed. Activate the chronograph function via the top pusher as you pass a mile marker. When you reach the next mile marker, stop the chronograph. Your speed will be displayed on the Tachymeter bezel. 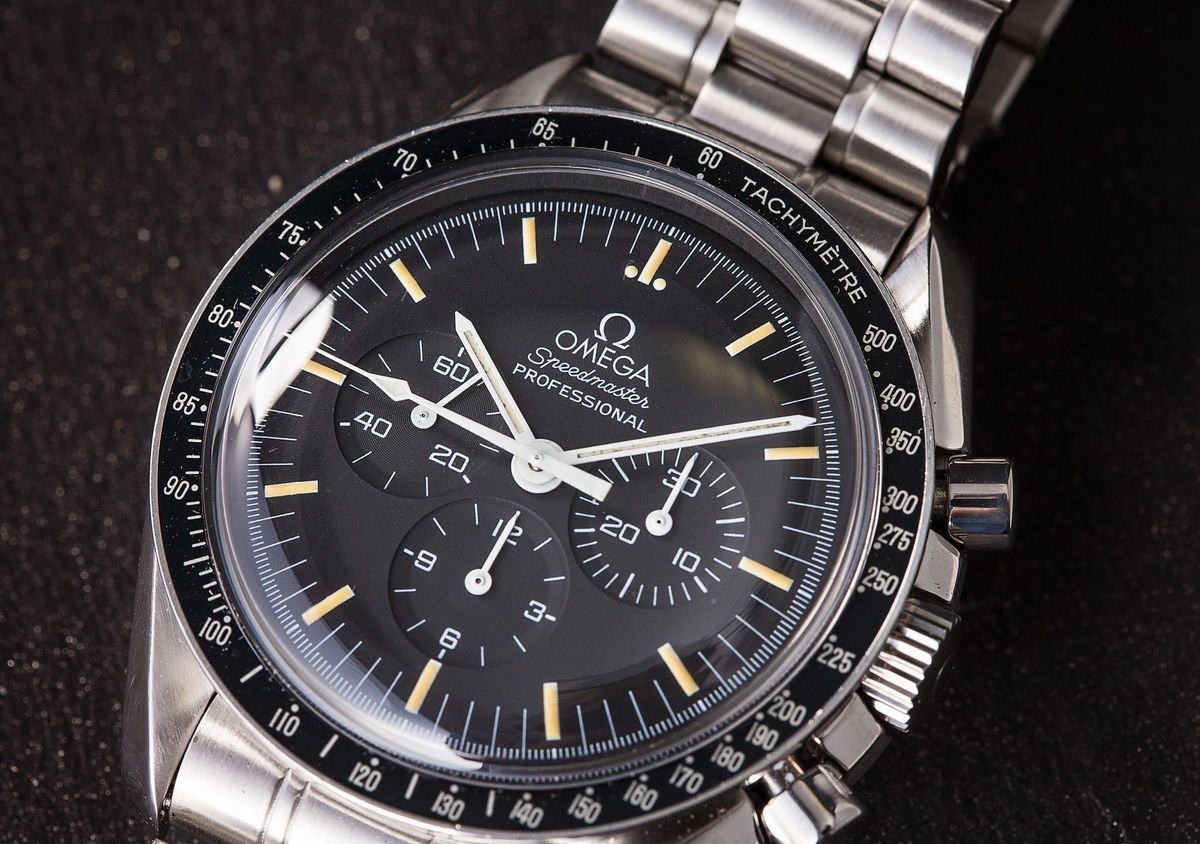 The Omega Speedmaster and the Olympics

Omega watches also have close ties with the Olympics, with the Speedmaster and its Tachymeter function proving quite useful while timing various events. However, many of the events don’t include running miles or kilometers at a time, rather meters. A different approach than explained previously is to time the race and calculate the athlete's speed in shorter distances by completing a simple equation.

For this example, we’ll say that the chronograph hand stopped at the 225-kilometer marker. That means that the runner can complete 225 200M runs within one hour. Convert the meters to kilometers to 0.2KM rather than 200M.

The Omega Speedmaster and Space Travel

The Speedmaster bested several other chronographs, including the now-iconic Daytona, to become NASA's official watch. While it was most notably the first watch on the Moon, earning it the name Moon Watch, the Speedmaster was also a vital companion during several other Apollo missions.

One of the most famous is the ill-fated Apollo 13 mission, which was immortalized in the 1995 Tom Hanks Flick "Apollo 13." During the mission, the Speedmaster played an essential role in the astronauts' survival by accurately timing a 14-second maneuver that was critical in bringing the astronauts home safely. As the story goes, the clock on the lunar model that the astronauts were occupying was broken. Instead, they used an Omega Speedmaster to time a 14-second fuel burn required to correct the aircraft's course.

As you can see, the Omega Speedmaster is easy to use if you understand its core functions. There are countless applications for the iconic chronograph, whether you’re a gold medalist training at the gym, a professional driver competing in the 24 Hours of Daytona, or taking a long road trip. We hope that this how-to guide will help you get the most out of your Speedmaster. 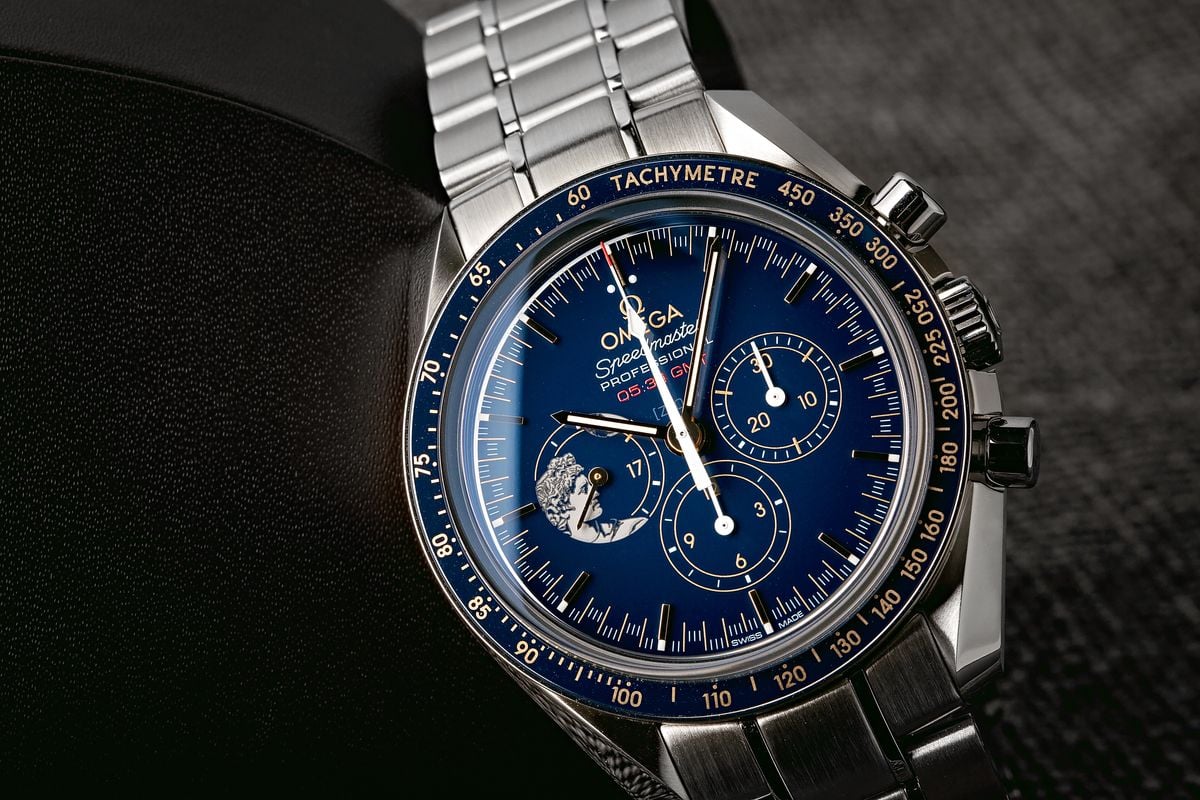