New Rolex Sky-Dweller Watches: Your Official Guide to the 2020 Collection

Easily the biggest news from the 2020 update to Rolex’s catalog is the all-new generation of Submariner watches with 41mm cases. However, while it is Rolex’s iconic collection of dive watches that has grabbed the most headlines, there are also new Rolex Sky-Dweller watches, now fitted with the brand’s signature Oysterflex bracelet.

Featuring both an annual calendar complication and a dual-timezone display, the Sky-Dweller is positioned as the ultimate luxury travel watch within Rolex’s catalog. However, ever since the last of the solid gold models with leather straps were discontinued a couple of years ago, the Oyster bracelet became the only option available for the collection. This limited the Sky-Dweller’s appeal among buyers who prefer to wear their watches on straps to metal bracelets; however with the Oysterflex now an option, Rolex’s line of luxury travel watches just expanded its appeal to a whole new segment of buyers. 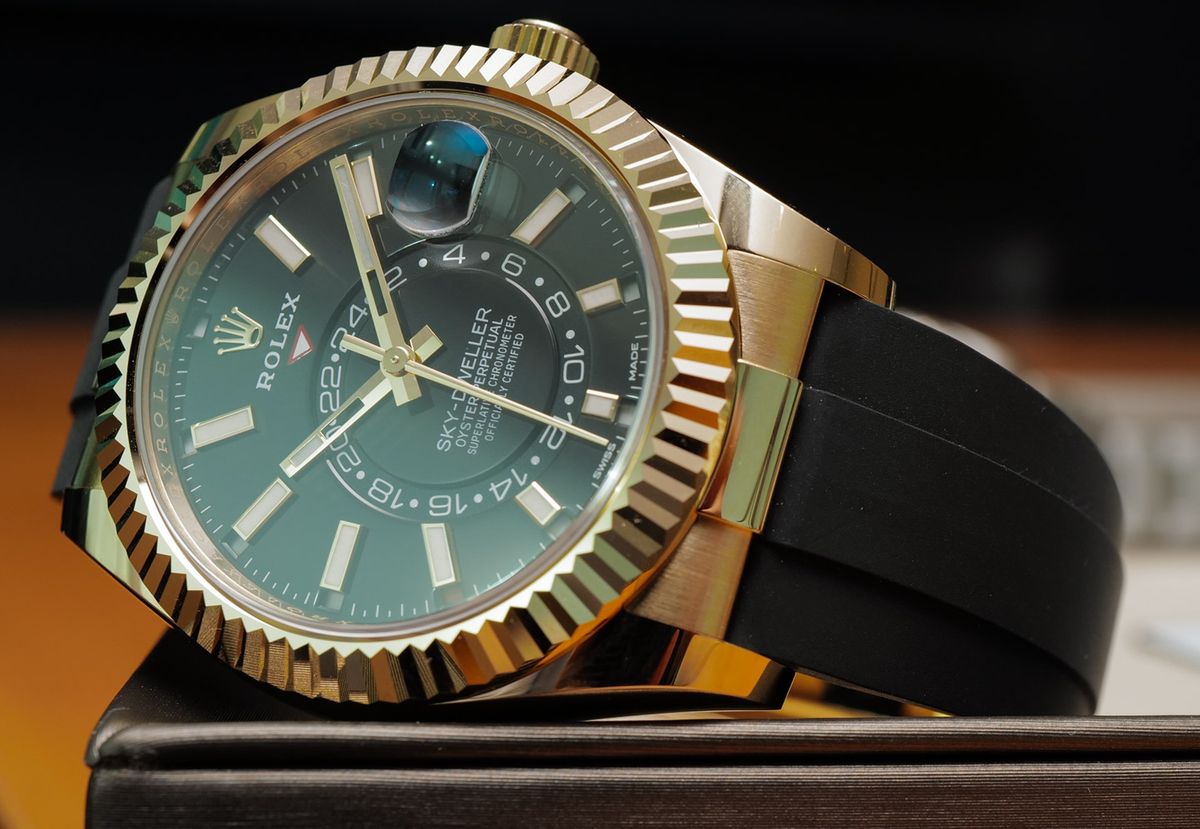 – Oysterflex Bracelet introduced to the collection

Click here to learn how to set the annual calendar on the Rolex Sky-Dweller.

Released in 2012, the Sky-Dweller is Rolex’s most recent all-new addition. It is also (by a significant margin) the most complicated piece in the brand’s contemporary lineup. Inside its 42mm case, it shoehorns in a date display, a dual timezone indicator, and the brand’s first-ever annual calendar. Despite this, the initial few years following its release were rather underwhelming. Sales were hampered by its somewhat unorthodox looks (such as the off-center GMT disc decapitating the lower hour markers) in addition to the fact it was only released in solid 18k gold and was consequently accompanied by correspondingly steep price tags.

Of the three original models, the yellow and white gold variants sat on the three-link Oyster bracelet, while the Everose piece was given a brown alligator leather strap. These models were joined in 2014 by another three, which reversed the configurations of the first series, with yellow gold and white gold models with leather straps, and Everose option on a matching Oyster bracelet.

However, they were still all-gold watches. It wouldn’t be until 2017 that the first signs of stainless steel appeared in the form of a pair of Rolesor examples. The steel/yellow gold and steel/white gold models made the Rolex Sky-Dweller significantly more accessible to a wider audience due to the lower cost, and the watch finally saw its stock begin to rise among fans. The dial was also given a restrained facelift, its Arabic numerals replaced by batons, the off-center GMT disc now in a matching color, and the main hands lengthened to make readability easier. These changes have all added up for the Rolex Sky-Dweller, and it is now a highly in-demand watch. So, what will the addition of some stylish new straps do for it? 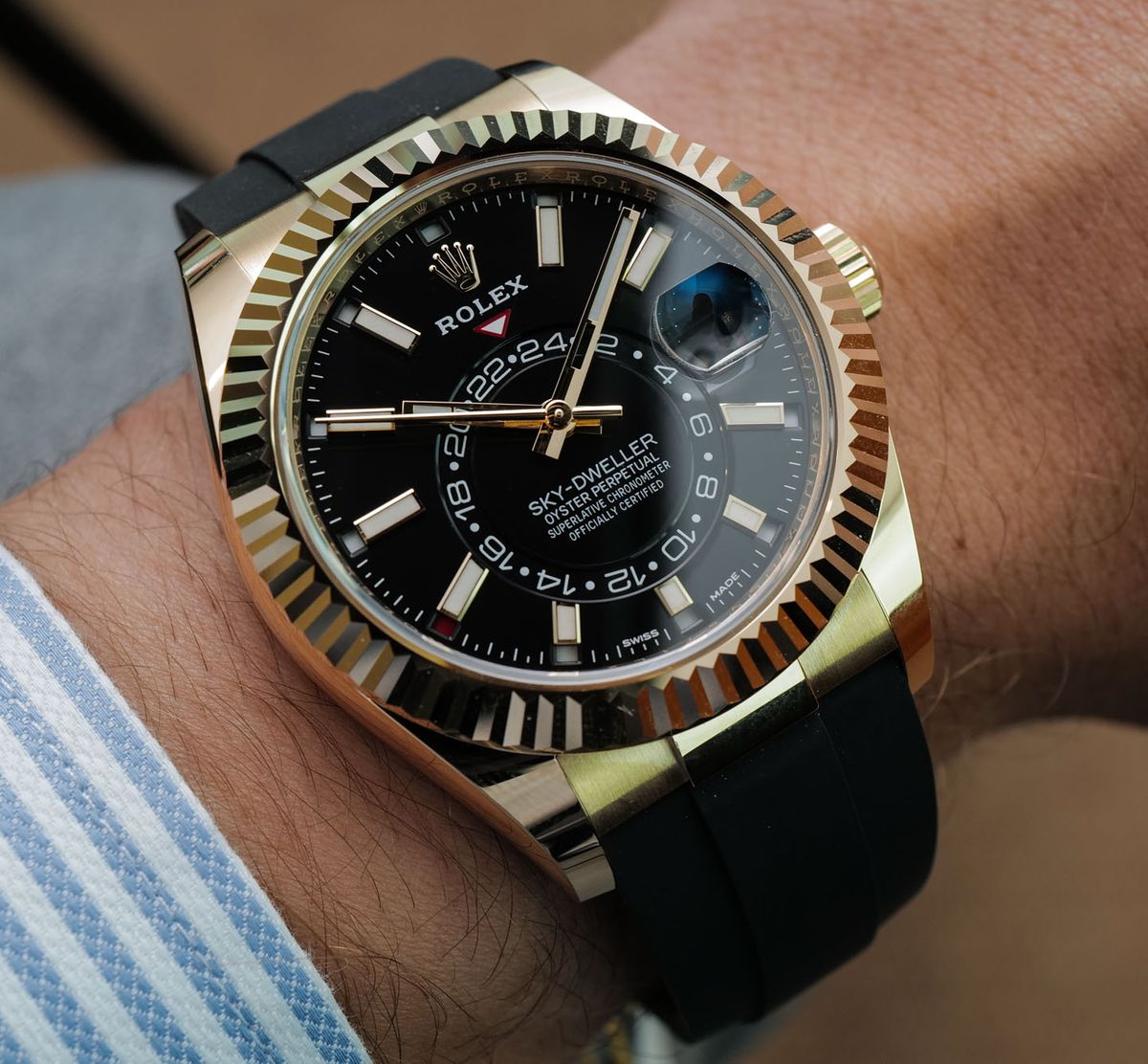 What is the Oysterflex Bracelet?

The contribution that a certain type of bracelet makes to the overall aesthetics of a watch can be easily overlooked. To many people, it is simply the way of making sure the thing doesn’t fall off your wrist. However, as anyone who has swapped out the bracelet on their watch for a leather strap will tell you, the entire personality of the piece gets changed in the process.

The Sky-Dweller is the first model from Rolex’s Classic Collection of watches to be given the brand’s Oysterflex bracelet, which at first glance, you might describe as a rubber strap. However, nothing is quite that simple when it comes to the world’s leading watchmaker.

To start with, Rolex insists that the Oysterflex be described as a bracelet rather than a strap, and when you look under the surface you see exactly why. Inside are two blades crafted from a titanium and nickel alloy, which give it supreme flexibility (as the name suggests), coupled with inherent strength. Covering that is a black hypoallergenic Elastomer (taken from ‘elastic’ and ‘polymer’), which allows the Oysterflex to mold itself to the shape of the wearer’s wrist.

That outer coating has a raised central portion on top to add a nice depth and texture, as well as longitudinal cushions on the underside that lift the Elastomer away from the skin to let air in and help keep the watch stabilized. In sort, the Oysterflex has the looks and comfort of a rubber strap and the durability of a metal bracelet. Additionally, Rolex states that the Oysterflex bracelets fitted to the new Sky-Dweller watches will be fitted with the brand’s new Glidelock extension system, meaning that its length is adjustable in 2.5mm increments, up to a total of 15mm.

The Oysterflex bracelet was first presented in 2015 when it made its debut on the recently-introduced Everose Yacht-Master (the 40mm ref. 116655 and the 37mm ref. 268655). Coupled with the new black Cerachrom bezels, it completely transformed the styling of the Yacht-Master, bringing a welcome informality and sports-forward aesthetic to the somewhat conventional luxury piece.

While it’s not the most dramatic release among the new 2020 watches from Rolex, the Sky-Dweller with an Oysterflex bracelet is certainly an eye-catcher, and it provides plenty of diversity to the collection. There are six variants available – three dial options for the yellow gold version and three for the Everose gold one.

The 18k yellow gold pieces have the choice of either white, black sunray, or champagne dials, while the Everose examples (Rolex’s name for its proprietary pink gold alloy), have white, dark rhodium, or chocolate brown dials. As previously stated, there are no Sky-Dweller watches with leather straps available anymore, but the cases of the new versions do feature similar lug hoods to those recently retired models, to give the Oysterflex a more integrated appearance with the case of the watch.

There are an additional 12  Sky-Dweller watches in the current collection that are fitted with Oyster bracelets, including the Rolesor models. Between the introduction of a predominantly stainless steel model and the implementation of the Oysterflex bracelet, it seems that Rolex is perhaps taking the Sky-Dweller collection in a more sporty direction.

What Else Has Changed?

Unlike the new Submariner which received a significant update both inside and out, the Rolex Sky-Dweller is no bigger (or smaller); it hasn’t had its case reshaped or its movement upgraded. The power is still provided by the in-house Caliber 9001 – the brand’s most component-heavy movement, consisting of 380 separate parts. Of those, 60 are used for the ingenious Ring Command Bezel system, which links the external bezel to the movement within, allowing it to act as an analog function selector for a facilitated setting process.

Using the Ring Command Bezel, the time, date, secondary timezone, and annual calendar can all be adjusted through the winding crown. An annual calendar is one that compensates for the differing number of days in the various months, meaning that the watch only has to be manually corrected once a year, on the 1st March. The annual calendar complication on the Rolex Sky-Dweller is known as SAROS, and its most unique feature is its month display. On the watch, every hour marker is topped by a small window, with each one corresponding to one of the 12 months (i.e. the aperture over the seven o’clock represents July, the eight represents August, etc.)

The window above the current month is filled with a contrasting color, which provides an easily-read display without the use of additional hands or apertures cut in the center of the dial. This system is visually simple yet mechanically complex, and it is an impressive achievement – even for Rolex. While the Sky-Dweller’s aesthetics continue to cause debate among some, no one is arguing over the brilliance of its movement. 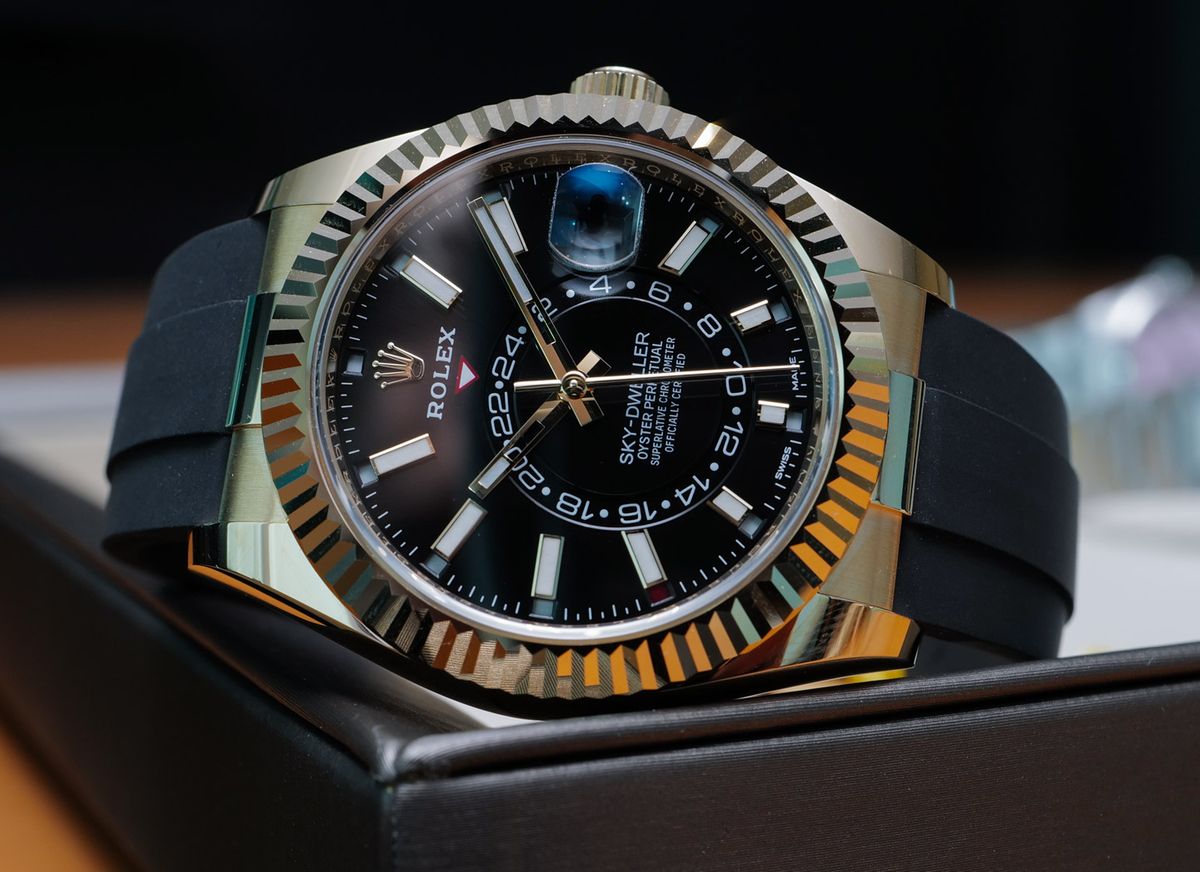 As Rolex’s most technologically advanced timepiece, the Sky-Dweller is not an inexpensive watch – especially not the solid gold ones. Retail prices for the new additions are as follows:

By comparison, below are the current retail prices for the various Rolex Sky-Dweller watches that are fitted with matching Oyster bracelets:

When Can You Buy One?

Officially, all of Rolex’s latest releases go on sale on September 2nd. However, getting your hands on one (which is not all that easy even during the best of times) is probably going to be even more difficult than usual. The temporary shutdown of manufacturing facilities earlier in the year is expected to have caused a decrease in Rolex’s overall production up to 30% or 40%. Unless your local AD is a very good friend or owes you a favor, you may have your work cut out actually locating a brand-new Sky-Dweller at retail.

Of course, the flip-side to that is that should you actually be lucky enough to buy one at retail, chances are that you will be getting yourself a decent investment. Sky-Dweller prices on the pre-owned market – particularly the White Rolesor (stainless steel) models – are increasing rapidly. Although the gold pieces rarely perform quite as well, these new models on Oysterflex bracelets could still be a highly valuable asset.

Despite a somewhat slow start, the Rolex Sky-Dweller has grown in acceptance and these new additions are likely only going to help. The watch’s functions are both useful and unique (at least within Rolex’s catalog) and the jet-black Oysterflex bracelet adds a nice sophisticated yet relaxed flavor to the collection. It also provides a great contrast against the radiance of the cases, and the dial choice is an intelligent one. The little red GMT triangle in each is just enough of a pop of color to keep the whole thing elevated.

All of that being said, there were undeniably some collectors hoping for a more noteworthy change to the collection. However, 2022 is the 10th anniversary of the Sky-Dweller and we know Rolex enjoys a good birthday celebration, so maybe something bigger is on the horizon!

*All images courtesy of aBlogtoWatch

2 Responses to “New Rolex Sky-Dweller Watches: Your Official Guide to the 2020 Collection”