Of course, when you think of Breitling, the first thing that likely comes to mind are aviation watches. But what many people don’t realize (or fail to recognize) is that Breitling was also an early pioneer in the category of dive watches. The Superocean, first released back in 1957, made its appearance around in the golden era of dive watches, around the same time that Rolex released the Submariner and Omega introduced the Seamaster. While the Submariner holds the title of being the first watch to be water-resistant to 100 meters, the Breitling Superocean doubled down on water resistance, promising a depth rating of up to 200m.

As the story goes, this watch was initially produced for the military but quickly gained popularity amongst serious divers, enthusiasts and watch collectors alike. The truth is, the Superocean came at just the right time – when the public began their love affair with these tool watches and the market was already hot. Nonetheless, it cemented the Breitling Superocean amongst the best dive watches on the planet. So, whether you’re a diver or just a fan of Breitling watches, having one of these in your collection is always a welcome presence. The Superocean is available with a variety of case sizes, styles, and complications, so in this buying guide, we are going to break down the collection, so that you can get your hands on the Breitling Superocean model that suits you best. 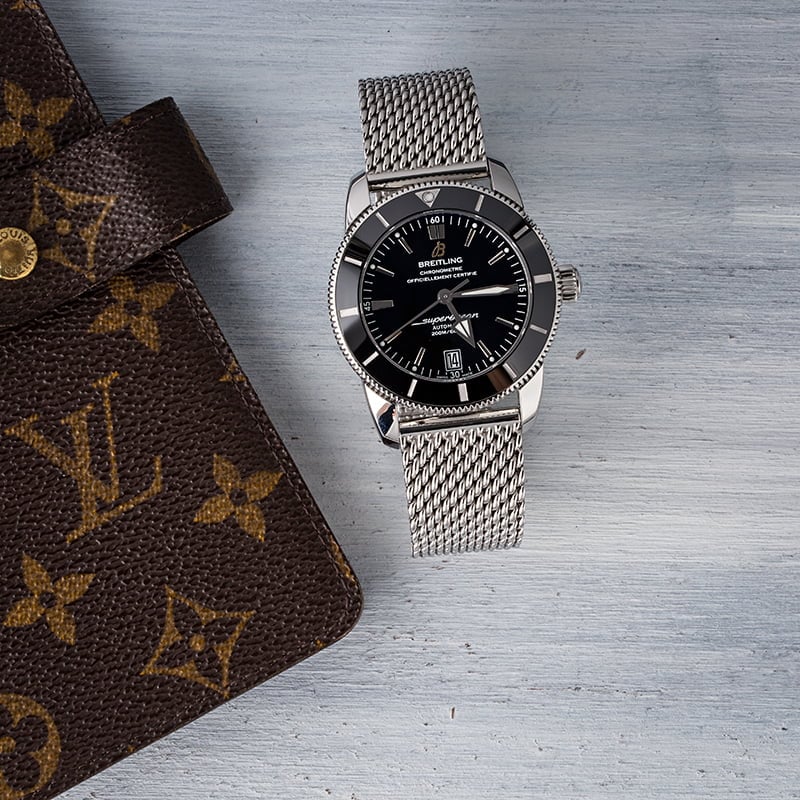 There are three distinct generations of the Breitling Superocean, the first the 38mm 1004 and the 807. The Superocean 1004 featured an automatic B125 movement with 3 hands where the 807 was, uniquely, a chronograph featuring a manual winding Venus 175. A lot sets these apart from the crowd, the first being that incredibly atypical concave bezel. A lot of vintage watch collectors — dive enthusiasts or not — also adore these watches for their long triangular, pointed hour markers. The lugs, while distinctive, are incredibly elegant and popular. 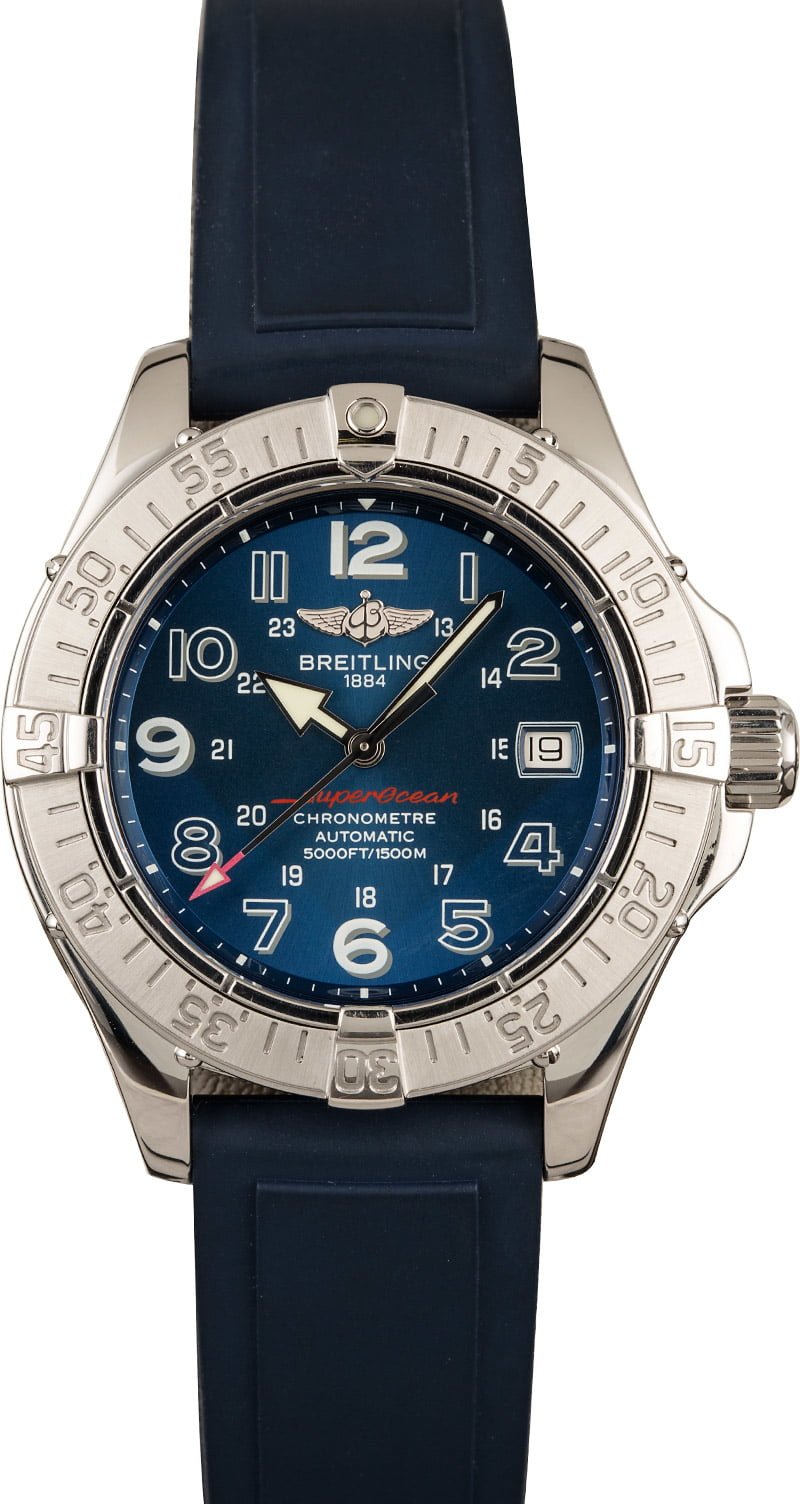 In 1964 both models were scratched for the larger 42mm Superocean 2005 which featured the famous ‘slow motion’ functionality thanks to a chronograph movement and a stark, readable black and white face. It’s also important to note that while this watch officially came out in 1964, there are examples with cases made as early as 1961 — meaning Breitling probably started building this watch out a few years before actually releasing it. But what made this watch so different was that ‘slow motion’ chronograph which actually tracks the elapsed minutes instead of seconds and is read via the lume-coated center hand with a diamond at the top. You’ll always notice the 2005 by its dual bezel, the inner white bezel (showcasing the minutes counted up in tens) and the black bezel. There’s also that iconic indicator at six o’clock which tells the wearer if the chronograph is in motion. Black means no, yellow yes, and black with a yellow dot is paused. Totally innovative.

Finally, there was the Superocean 2005 Execution 2 in 1971. But like its predecessor, it has cases dating back further, some as early as 1965. And while the Execution 2 kept the larger elements the same — like the case, ‘slow motion’ chronograph functionality and the dual bezel approach, the face got a bold upgrade. That means you’ll always be able to recognize the Execution 2 by the chunky square hour markers with shorter, equally chunky hands as well as a sweep seconds subdial over at nine o’clock. There’s also an edition of the Execution 2 that features a yachting bezel. 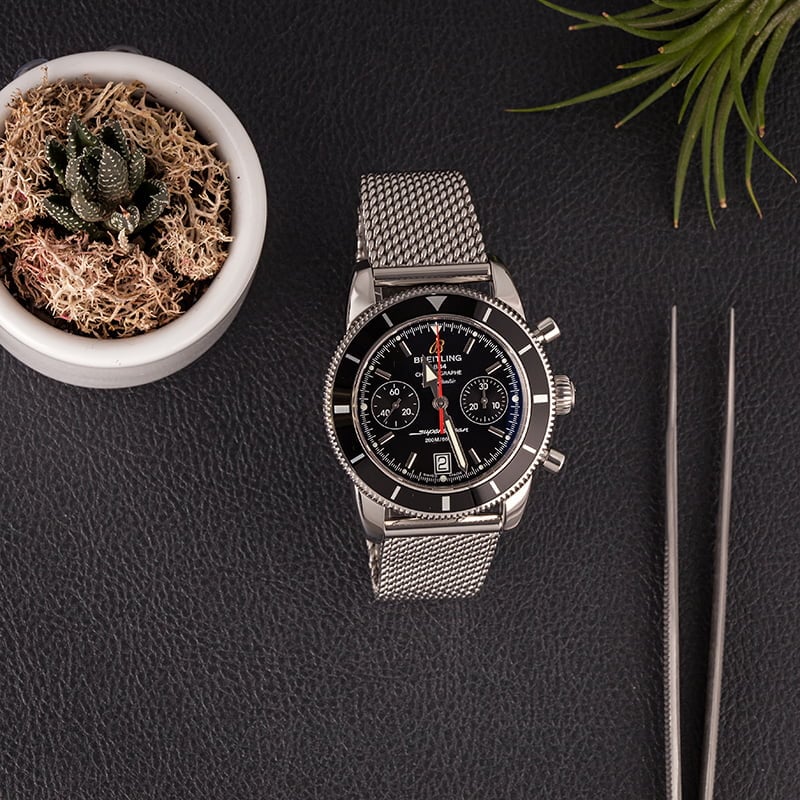 In more recent history, in 2007 the Superocean celebrated 60 years. With that milestone came the Heritage collection, a tribute to the first every Superocean. The watch featured old school details like the old Breitling logo and a braided steel bracelet. But, it was also updated to a larger 38mm as well as 46mm with a range of colors. You could also opt for a leather or rubber bracelet, too. 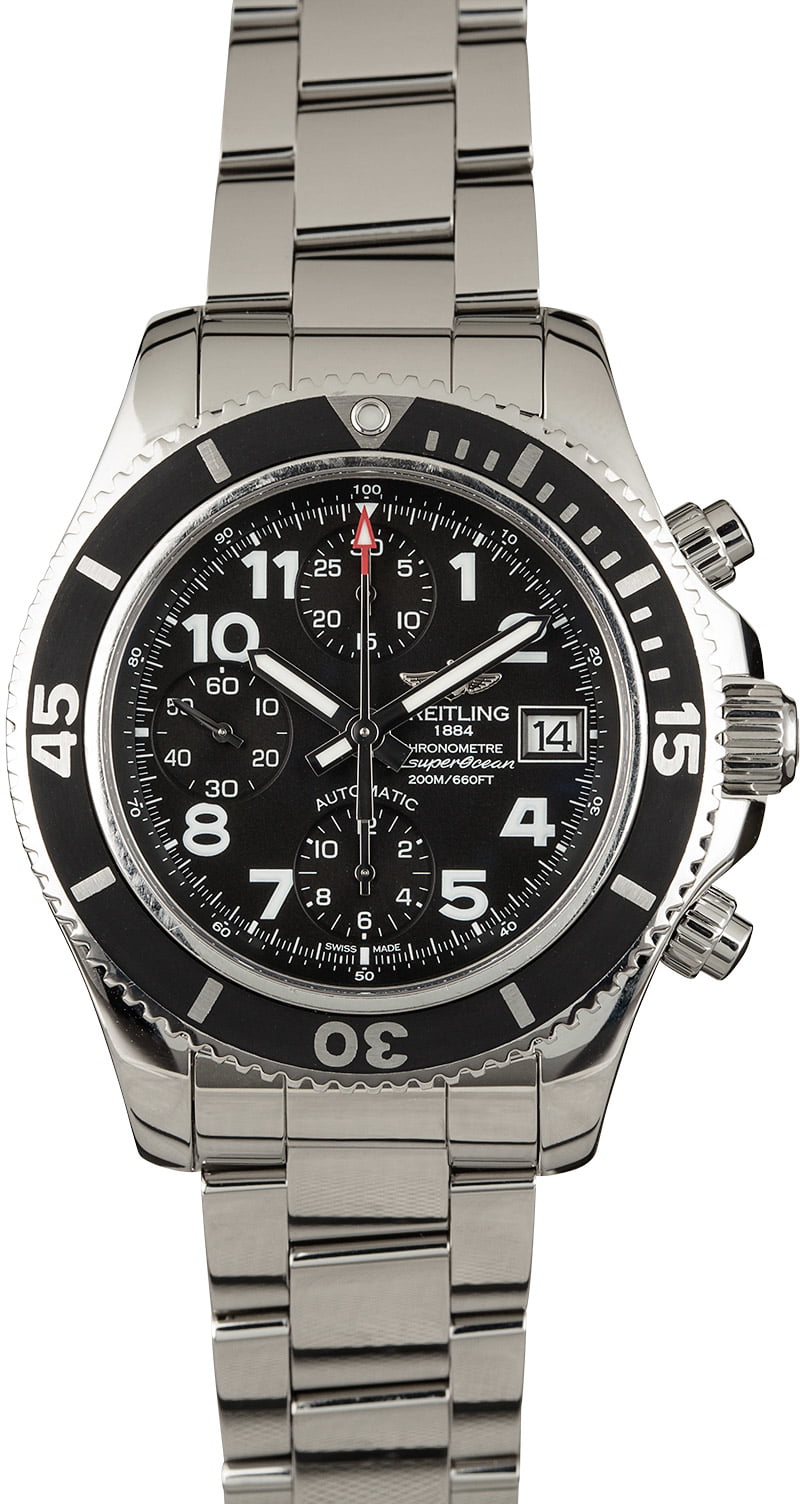 In 2017 the Superocean collection got its latest upgrade, featuring an array of dial and bezel colors, bands, collaborations and variations for just about every collector. Generally, though, a few key elements define the modern collection. The first is the dial, which no matter the color or collaboration, features those iconic Arabic numerals at 12, 3, 6 and 9 with (much smaller and less pointy today) triangular hour markers in between that nod to the earliest Superocean. The hands have been thinned down, and the center hand is incredibly slim with a triangular point that’s always colored for easy readability. You’ll find the latest Superocean in 36mm, 42mm, 44mm, 46mm — all stainless steel. They also all feature automatic movements, the B17 which boasts 28 jewels and a 38-hour power reserve.

The newest models are also incredibly innovative, some with the ability to withstand depths of 2,000 meters and helium valves to withstand the pressure. With such an enduring legacy built on innovation, new and vintage models hold great value and fanfare amongst collectors. So, shop on! 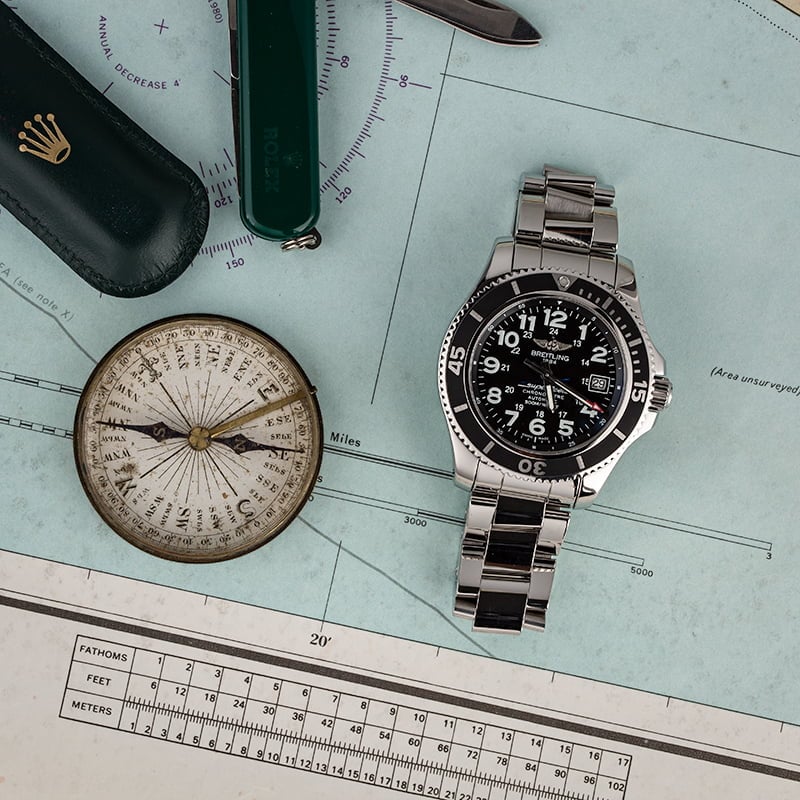