Breitling Watches: The Most Popular Models

Swiss watchmaker Breitling is in the middle of a reinvention stage at the moment, one that is producing a slew of fascinating and impressive models. A new CEO, in the shape of Georges Kern, took over the helm in 2017, and he has instigated a dramatic shakeup of the 136-year-old brand. Breitling watches are best known for their ultra-masculine and extremely technical designs; however, Breitling has set about simplifying its output to appeal to a wider, less niche audience.

The portfolio now spans 10 collections, encompassing watches intended for land, air, and sea. Additionally, beyond jumping feet first into the state-of-the-art arena of wearable tech, Breitling has also embraced its own heritage with a series of vintage-inspired pieces. It has all signaled a successful turnaround in the company’s fortunes, producing the sort of robustly stylish watches that can be worn every day and in a broad range of circumstances. Below we pick out three of Breitling’s most popular models. 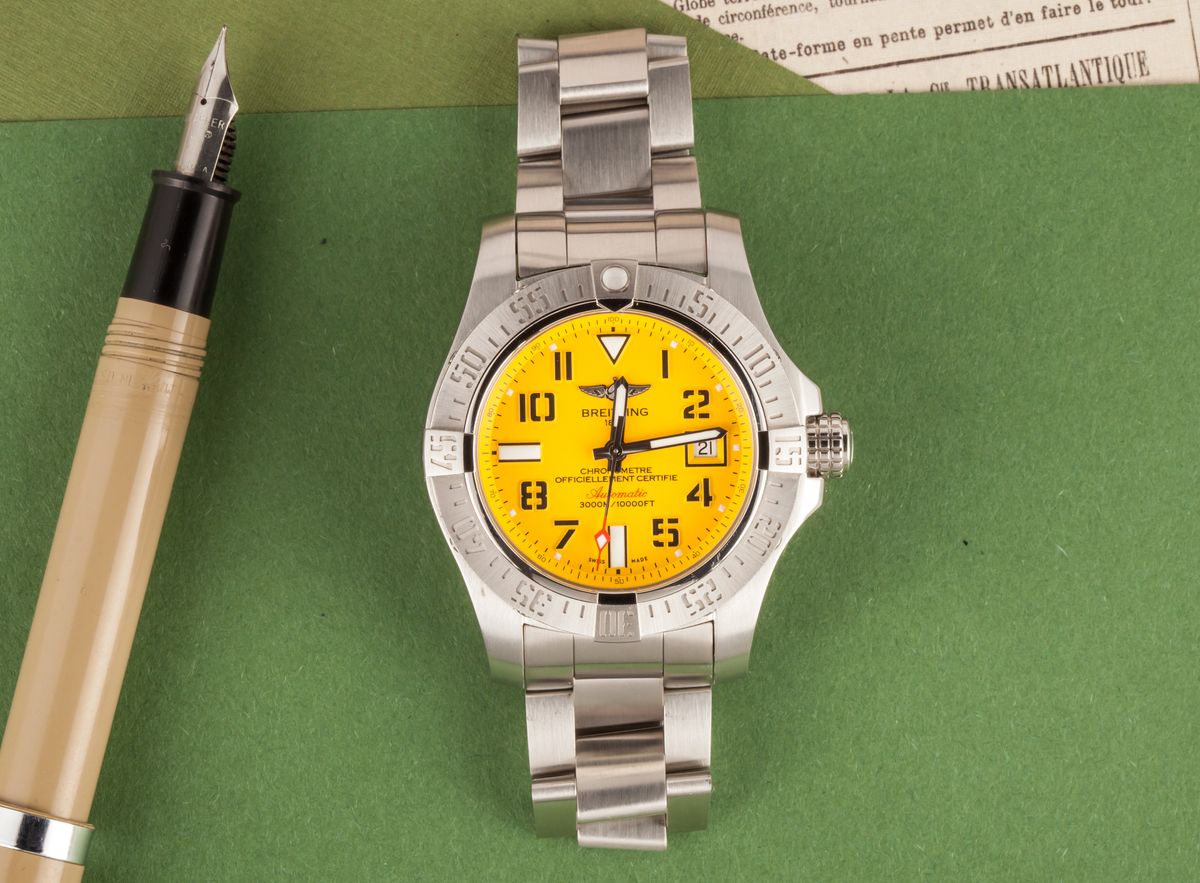 What are the most popular Breitling watches? 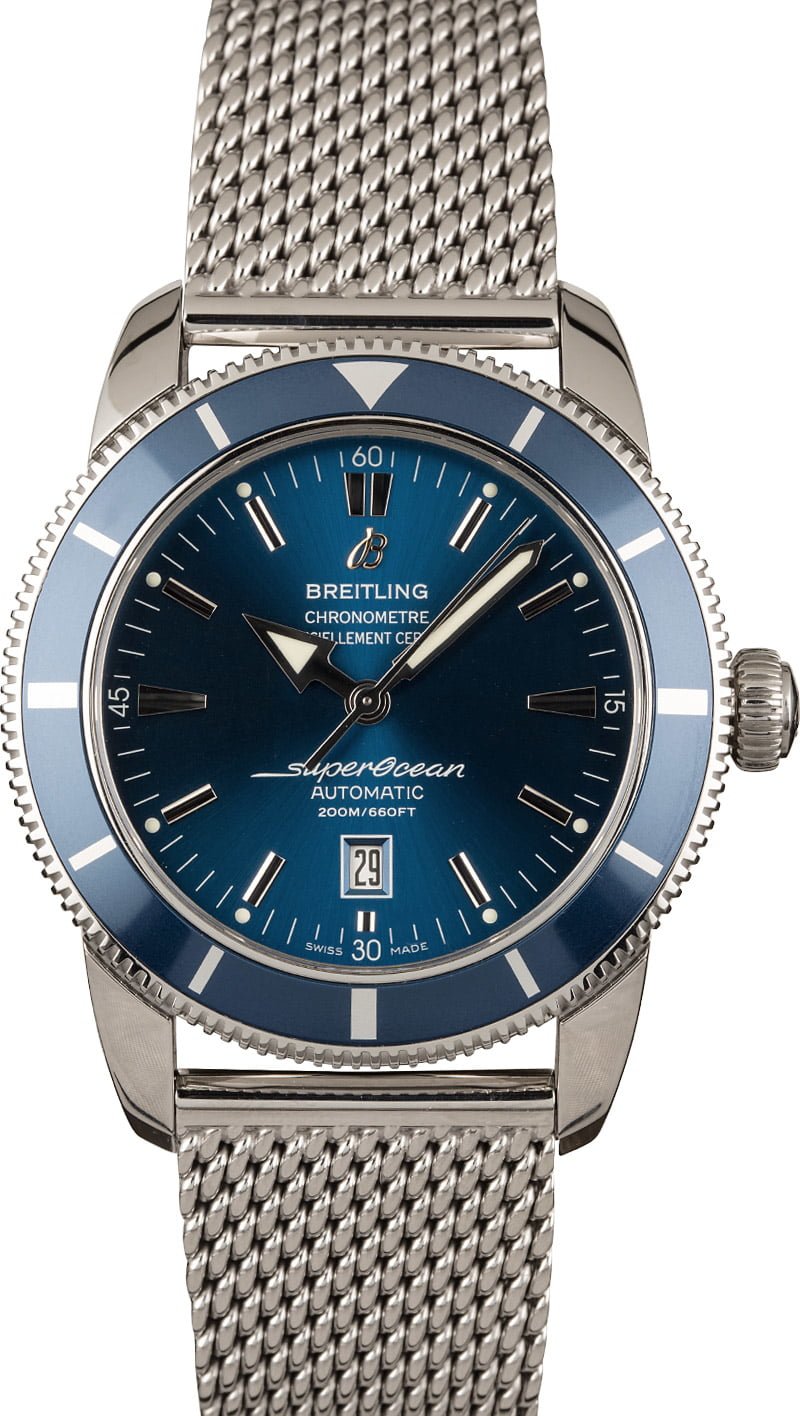 The debut Breitling Superocean was released in 1957 and represented the brand’s first dive watch after decades concentrating mainly on aviation models. With a water resistance of 200m it was even more robust than the equivalents from Rolex and Omega at the time, and this range of Breitling watches has continued to be developed, with today’s Superocean models capable of reaching depths of up to 1,000m.

However, on the 50th anniversary of the original in 2007, Breitling emerged with the Superocean Heritage, a collection with its aesthetics taken directly from the inaugural series, combined with the best of modern technology. Issued in a number of guises, customers could take their pick from simple three-handers or chronographs in a host of different colors. The Superocean became one the best-selling Breitling watches and was updated again in 2017 with the Superocean Heritage II, which added 46mm models to go along with the 42mm and 44mm examples.

The visual differences between the two generations are minimal, with the newer range making use of a super hard, unscratchable ceramic for the bezel insert in place of the former aluminum, along with a subtle redesign of the handset. The bigger changes are on the inside, with the former models powered by ETA-based movements while the latter use a mix of homegrown calibers (the Breitling B01 in the most recent chronograph editions) as well as the B20, derived from Tudor’s excellent MT5612 for the time and date pieces.

Metal options also vary; the majority of the Superocean models are in stainless steel, with a handful of 18k red gold pieces available as well. Overall, both Superocean Heritage iterations are superbly handsome, elegant dive watches, and can often be found at some very attractive price points. 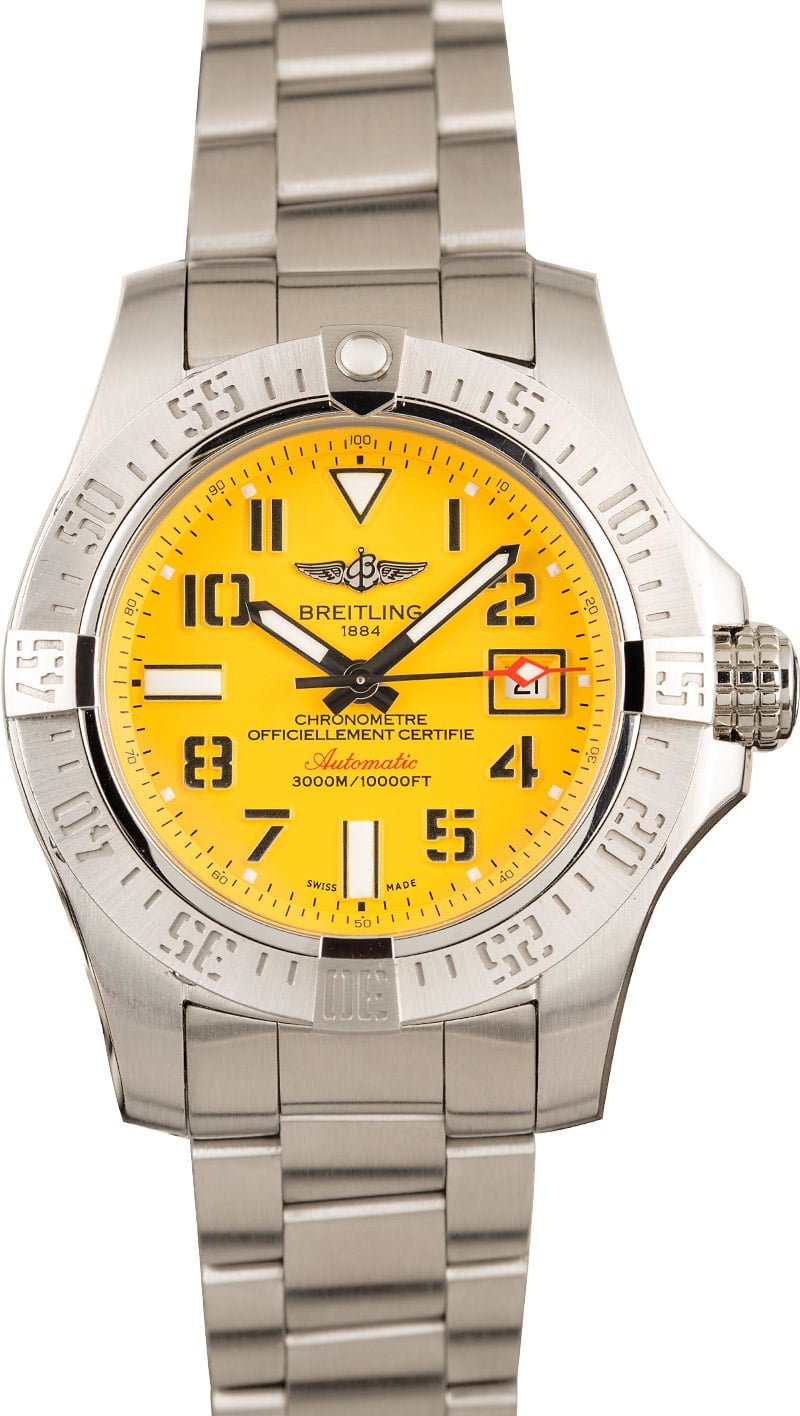 Not expected to ever make a list of small and understated Breitling watches, the Avenger II Seawolf is an utter leviathan of a timepiece. Sporting a steel case measuring 45mm in diameter and with a height of 18.4mm, it is not going to be slipping under many shirt sleeves. Even so, its cleverly angled lugs mean that it hugs the wrist securely despite its bulk. However, its incredible water resistance of 3,000m tells you that it was clearly designed for another type of role completely.

The Breitling Avenger II Seawolf is stocked full of professional dive watch features: the grenade-style crown is thick and easy to turn even while wearing gloves, there is a Helium escape valve in the side of the case at the nine o’clock, and the bezel – fixed in place by a total of eight visible screws – is unidirectional and has hash marks the whole way round, rather than for just the first 15 minutes like many other divers. That bezel also features Breitling’s trademark rider tabs at the four cardinal points, first introduced on the latter-day Chronomat, making manipulating the bezel easier underwater.

On the dial, huge applied hour markers, either Arabic numerals or batons, keep it all extremely readable, with the hour and minute hands swamped with lume and a splash of bright red on the tip of the seconds hand for improved legibility. Power comes from the Breitling B17 – a reworking of the ETA 2824, quite possibly the most widely used third-party movement of them all. The B17 is used in a number of Breitling watches and offers a proven track record of reliability and precision. A wholly dependable workhorse, it beats at 28,800vph and offers a 38-hour reserve.

The Avenger II Seawolf is available in three colors: yellow, grey and black – or, to give them their proper titles: Cobra, Tungsten, and Volcano. This is the kind of watch we are more familiar with from Breitling: big, bold, and built like a tank. An enormous and massively capable watch, there is little else out there offering so much capability for the money. 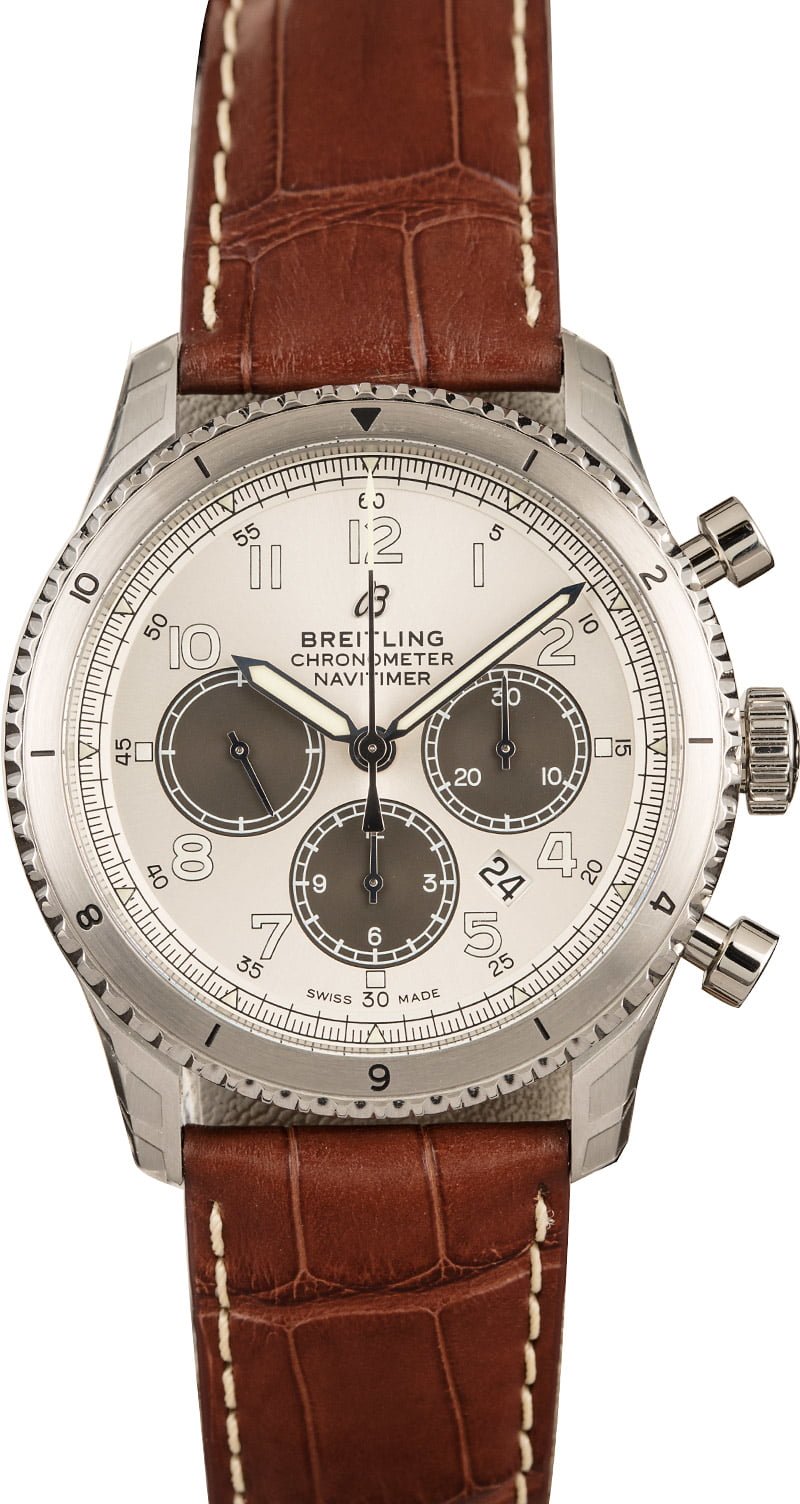 Probably the most recognizable of all Breitling watches – both past and present – is the Navitimer: the iconic pilot’s watch complete with a slide rule bezel designed to be an analog flight computer for mid-flight calculations. The Breitling Navitimer is something of a legend in both watch and aviation circles, so when Georges Kern’s first new release upon taking over as CEO carried the ‘Navitimer 8’ title but omitted the famous surround, it caused some confusion. In fact, it caused so much confusion that it was eventually renamed, as the Aviator 8. Branding complexities aside, the Navitimer/Aviator 8 is the perfect illustration of where Breitling is headed.

The brand’s association with the world of flying is well known and goes back more than 80-years, and their contribution to pioneering the chronograph wristwatch dates back even further. Those two areas of expertise are combined here, with the Aviator 8 featuring a beautifully retro aesthetic complete with the traditional tri-compax arrangement of sub-dials for the chronograph. At 43mm, it is another large piece – as a pilot’s model should be – and legibility is again prized with clean, clear dials and easily discernible indexes.

Inside, Breitling’s own B01 runs the show, an automatic ratchet-wheel chronograph movement with a vertical clutch and more than 70-hours of power reserve. It drives the 30-minute and 12-hour counters, as well as the running seconds dial and the stopwatch itself. Finishing it off is a small date window that pops up between the four and five o’clock markers.

As before, it is issued in a range of colors, with the steel pieces given a choice of black, grey, or blue dials, while the 18k red gold example comes with a bronze-colored face. All versions are impressively versatile, with a definite air of formality behind them. With its blend of vintage nostalgia, coupled with the prestige of an in-house engine, the Aviator 8 B01 Chronograph is a superb offering and an exciting step forward from Breitling.

3 Responses to “Breitling Watches: The Most Popular Models”