As the story goes, Hans Wilsdorf received word that British Royal Air Force pilots preferred their personally-purchased Rolex watches over their military-issued timepieces. Honored by their devotion to the Rolex brand, Wilsdorf set out to develop a set of watches to honor the pilots. The result was the Air Series, which included a dumber of short-lived models including the Air-Giant, Air-Tiger, Air-Lion, and most notably, the Rolex Air-King.

Today, the Rolex Air-King is the only watch from that series that still remains in production. However, it has undergone, perhaps, one of the most dramatic evolutions of any other model in the Rolex catalog. 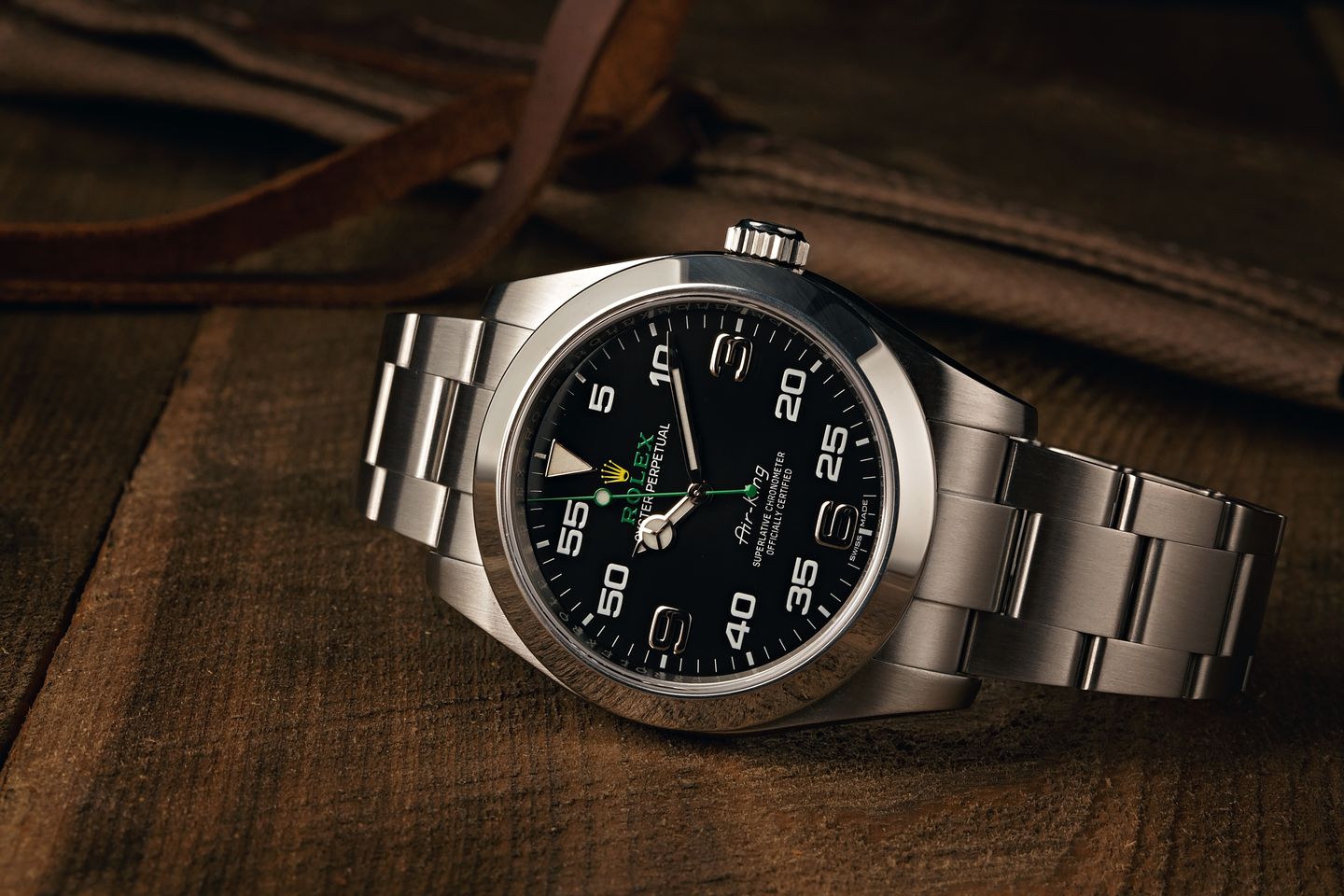 The Rolex Air-King originally entered the market as the ref. 4925 with a manually-wound movement and a 34mm case. Several other references quickly followed, which were all discontinued and finally replaced in 1958 with the ref. 5500 powered by the Cal. 1520/1530 movement, officially marking the beginning of the Air-King as we know it today.

The collection would see another significant upgrade to the movement with the ref. 14000/14000M series, which utilizes the Cal. 3000 and then later the modified Cal. 3130 movement, which with the arrival of the ref. 114200 would finally grant the watch COSC Chronometer-certification status.

The ref. 5500 is one of the most iconic editions of the Air-King. Some might even argue that it is the quintessential vintage entry-level Rolex. It’s even a fixture on many notable collector’s wrists such as A-list celebrity Ryan Gosling.

As previously mentioned, the ref. 5500 Air-King was powered by the self-winding Cal. 1520 and 1530 movements, and really marked the start of the Rolex Air-King as a cohesive collection. It also features a design that characterized the line for decades with a 34mm Oyster case in stainless steel, a matching smooth bezel, and a time-only dial.

The next significant change to the Air-King collection wouldn’t come until around the late 1980s with the addition of ref. 14000. This version brought with it a higher-beat Cal. 3000 movement and a sapphire crystal. While it maintained a similar 34mm diameter and time-only movement as the ref. 5500, the ref. 14000 exudes a slightly more contemporary aesthetic due to its modern sapphire crystal and a wide variety of different and more more modern  dial styles.

About a decade later, the ref. 14000 was upgraded to the cal. 3130 Perpetual movement with a full balance bridge, larger balance wheel, and Breguet overcoil. This upgrade was signified as “modified” with an “M” at the end of the reference number. This brought the Air-King up to date as far as its movement; however, it still lacked chronometer certification.

The 6-digit Air-King made its debut in the mid-2000s with the ref. 114200. This edition runs on the same Cal. 3130 movement as its ref. 14000M predecessor, only now the movement came COSC Chronometer-rated, promising a higher degree of accuracy.

The most significant differences between the two references lie in the slight nuances of the ref. 114200’s overall design. The case remains 34mm in diameter, only now it’s flanked by slightly thicker and high-polished lugs. The dial also exudes modern Rolex design with the additional ‘Superlative Chronometer Officially Certified’ text on the lower half of its dial, replacing the ‘Precision’ or ‘Super Precision’ that can be found on all previous generations. Lastly the bracelet was upgraded to feature completely solid links and a redesigned machined clasp. 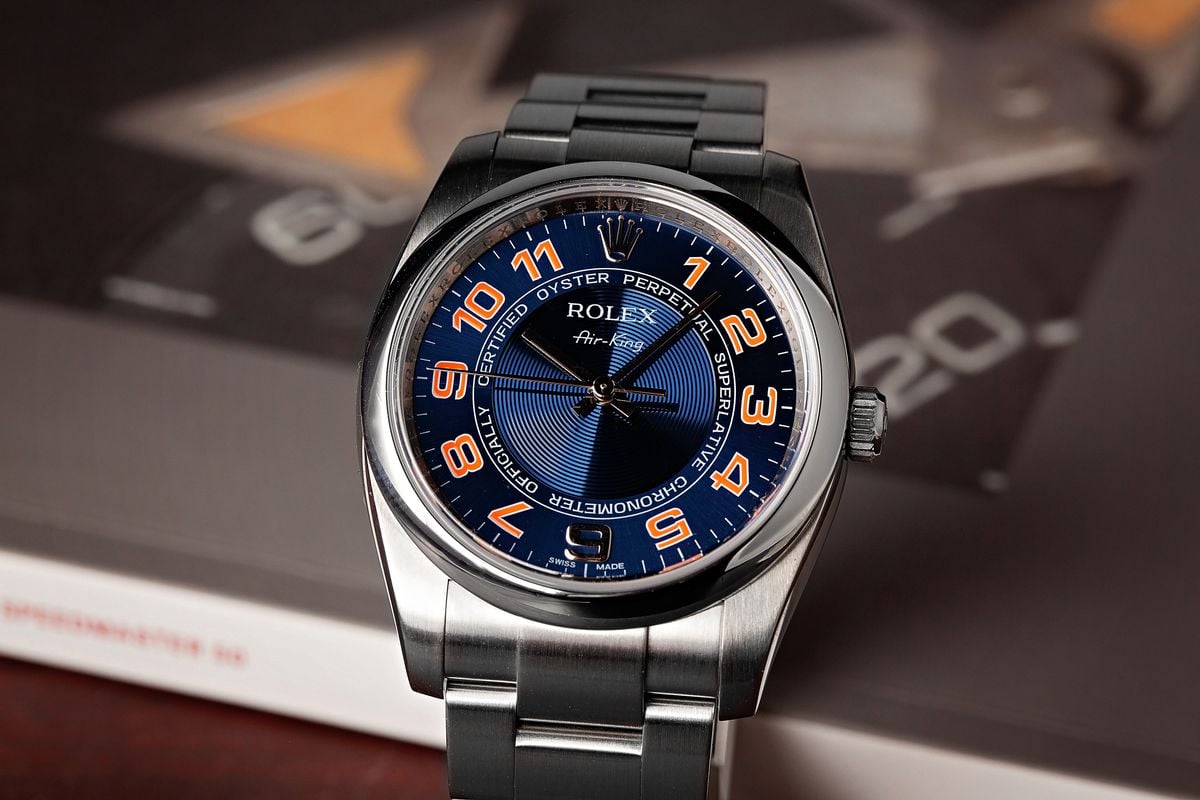 The Air-King took on a brand-new form when the ref. 116900 was introduced at Baselworld 2016 after a brief discontinuation in 2014. Its new 40mm case was borrowed from the Milgauss, and even included the same antimagnetic inner shield. The ref. 116900 asl0 received the new-style bracelet with solid links and an Oysterclasp with an innovative, tool-free 5mm Easylink extension system. 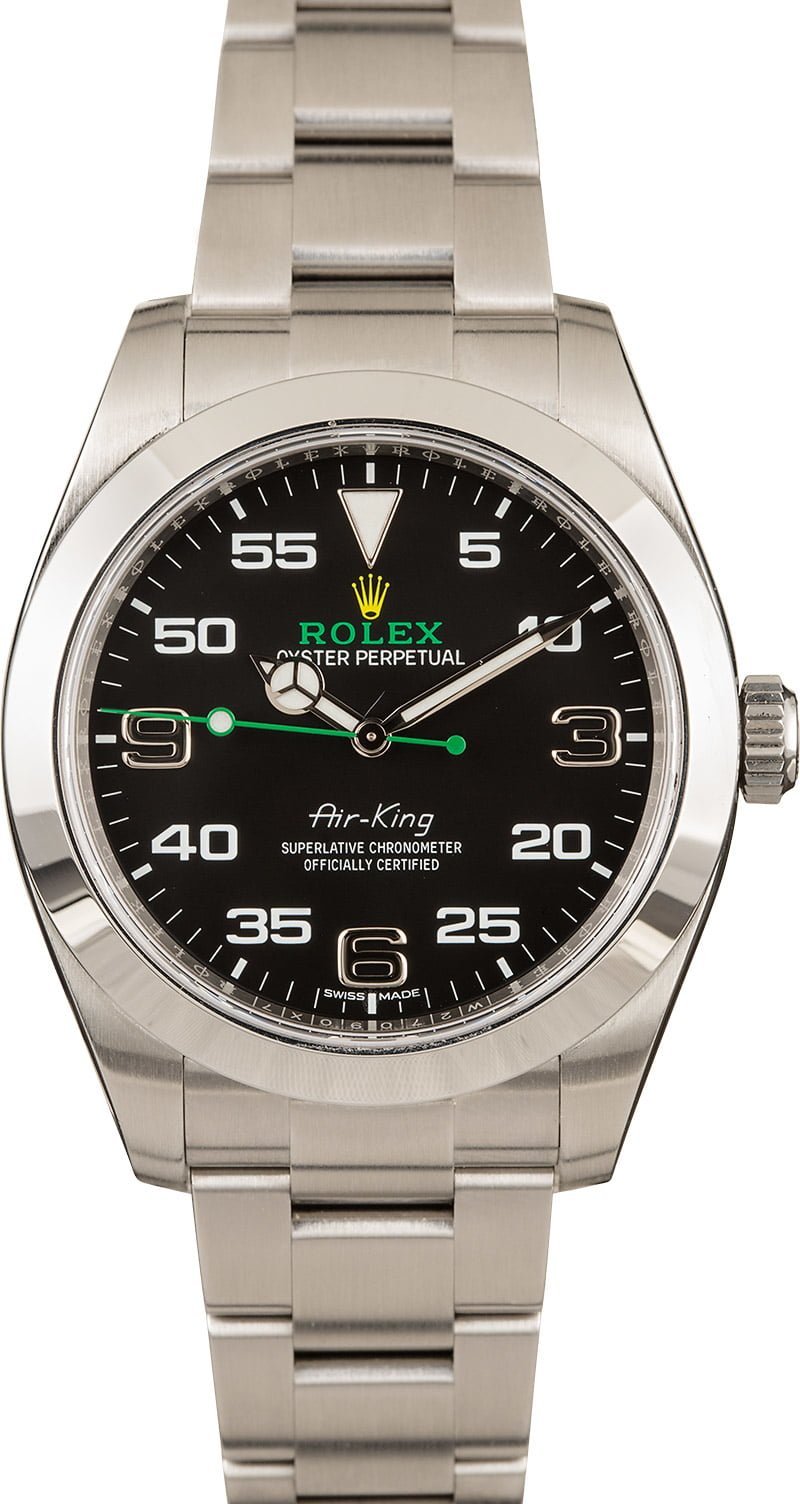 The ref. 116900 also received the Cal. 3131 Perpetual movement, which it also borrowed from the Milgauss, further increasing its antimagnetic capabilities. The most noticeable upgrade, however, is the dial, which now features white 5-minute Arabic hour markers, 18k white gold Arabic hour markers at the 3, 6, and 9 o’clock positions, and a luminous inverted triangle at 12 o’clock.

Matching luminous Mercedes hands complete the display with a bright green and gold Rolex logo and matching green seconds hand. The Air-King logo is still present in its same historic font, only now it sits on the lower half of the dial. The overall design of the current Air-King dial was based on the cockpit instruments created by Rolex for the Bloodhound Super Sonic Car. 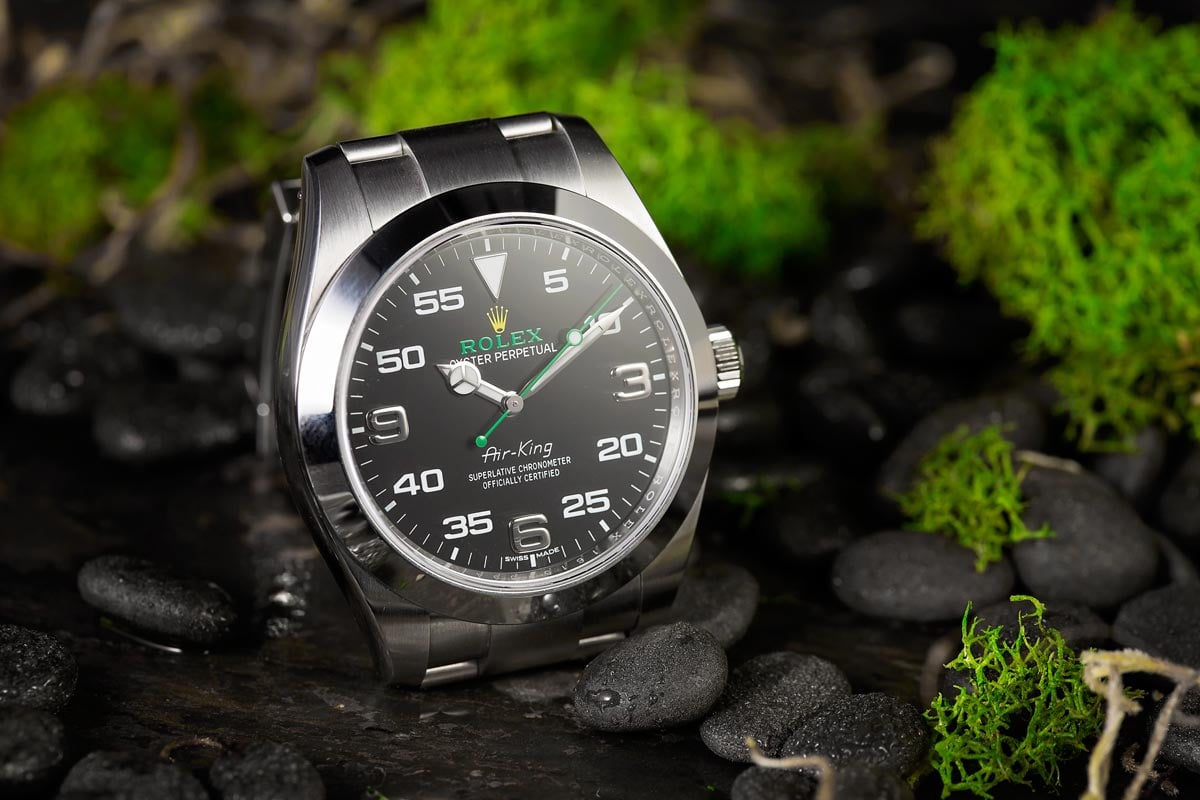 Side-by-side, there are many differences between the 40mm and 34mm Air-King pilot’s watch. The most obvious lies in the size of the case and the design of the dial. The ref. 116900 more closely resembles a traditional sports watch, while the 34mm editions resemble a classic Rolex dress watch.

Both versions run on a time-only movement; however, since the new ref. 116900 borrows its case and movement from the Milgauss collection, it offers the same legendary antimagnetic capabilities of Rolex’s famed scientist’s watch. Additionally, the black dial and Mercedes-style hands on the current ref. 116900 give the watch a much more sporty appearance than all previous Rolex Air-King watches. 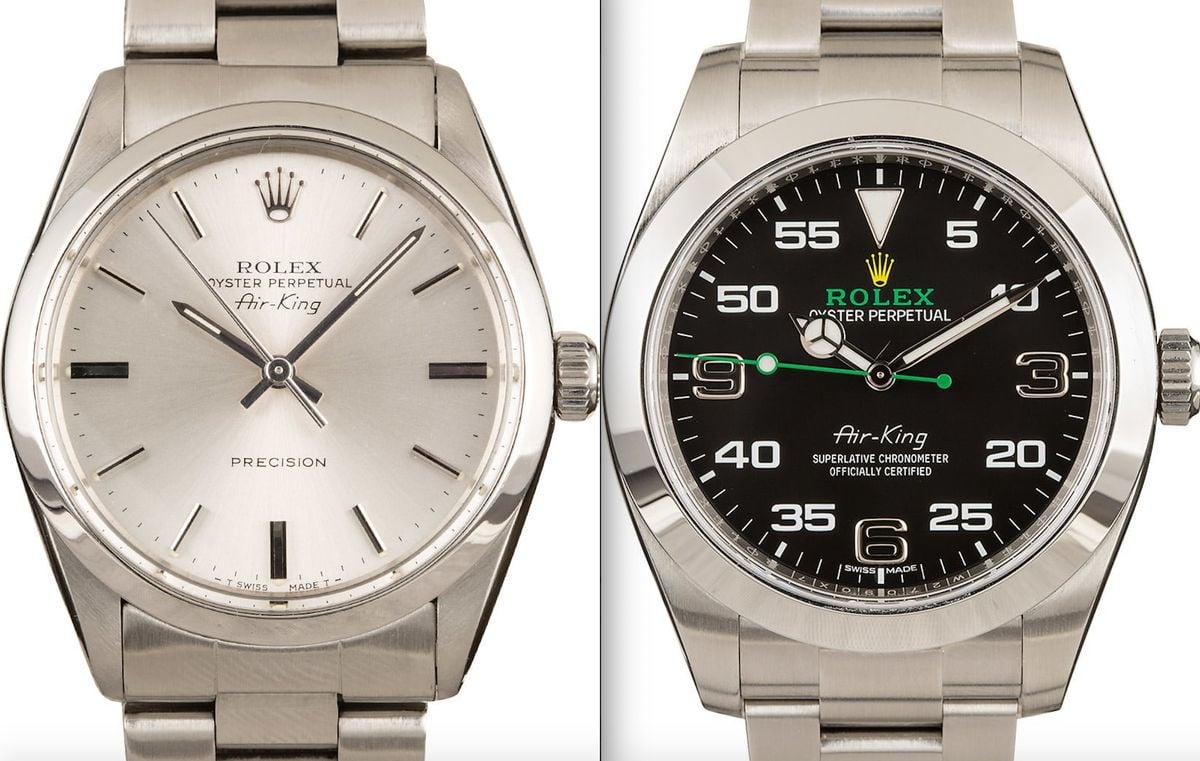 All editions of the Rolex Air-King are quite reasonable investments with the ref. 116900 retailing for $6,450. However, despite its reasonable price, the current global extreme demand for stainless steel Rolex sports watches has resulted in a shortage of Air-King at many retail locations.

Rolex Air-King Prices are even more affordable on the secondary market, with older ref. 5500 watches being among the most affordable vintage Rolex watches available, making the Air-King a desirable choice in all of its many forms. 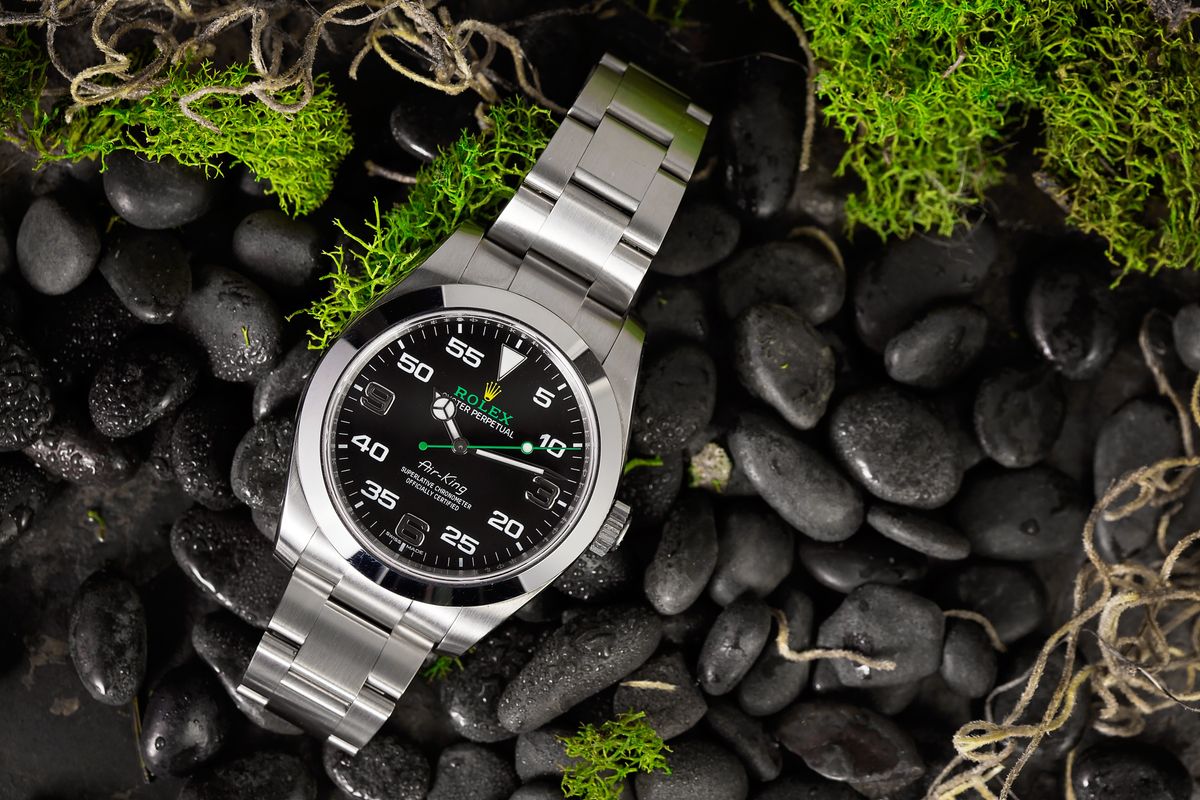