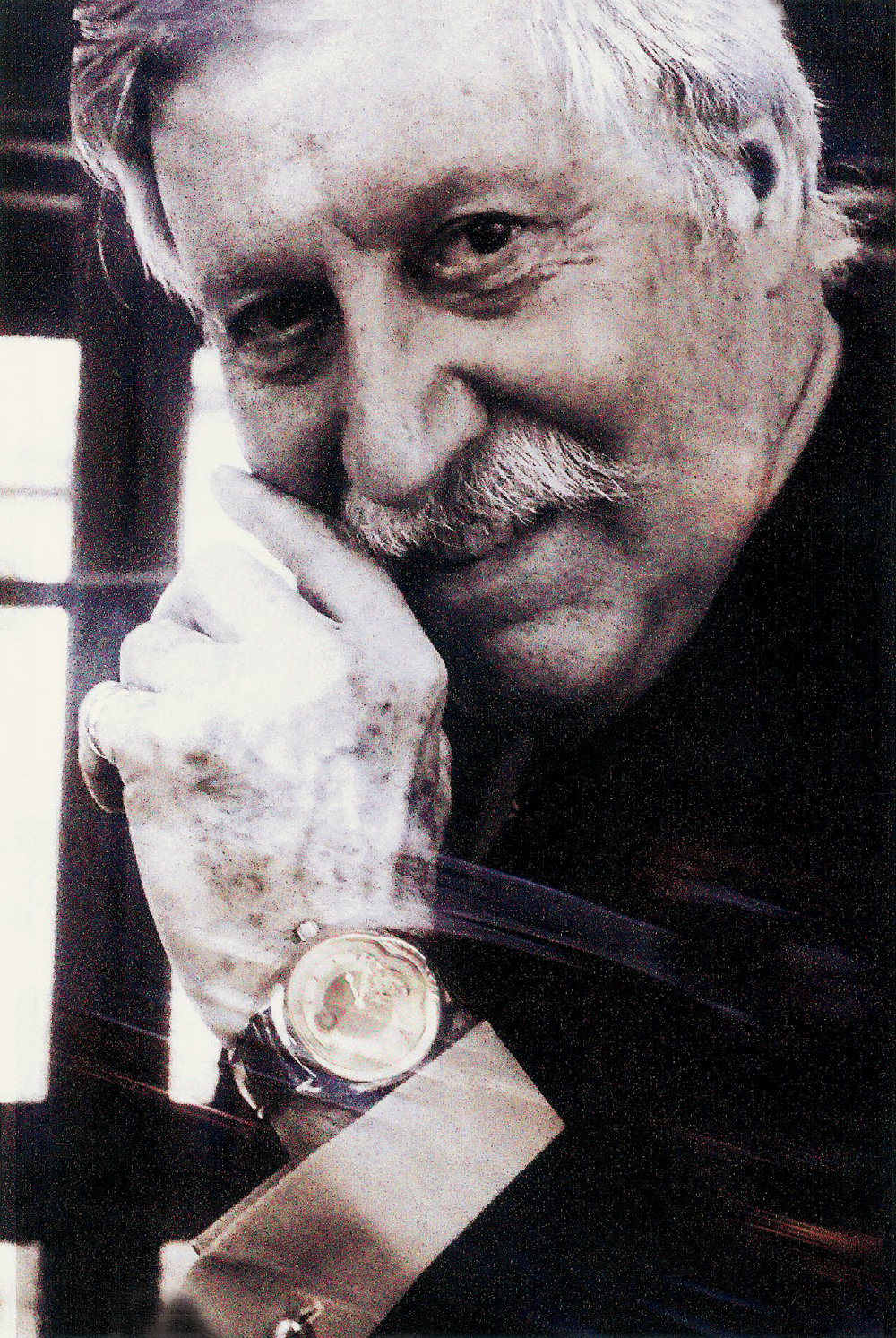 The legendary Gérald Genta poses with one of his watches. He inspired the Bulgari Octo.

The Bulgari Octo is, without doubt, a cult timepiece – in spite of its maker, which most collectors dismiss as more of a jewelry than a watch brand. The Octo transcends this trope thanks to its impeccable lineage; it was designed by the legendary Gérald Genta, the Swiss genius who was also responsible for horological icons like the Omega Constellation (1959), Audemars Piguet Royal Oak (1970), IWC Ingenieur (1976), Patek Philippe Nautilus (1976) and Cartier Pasha de Cartier (1985). The Octo, which shares much of its DNA with the Royal Oak. It was originally produced under Genta’s own name before he sold his company to Bulgari in 1999. This gave their fledgling watch business instant credibility. 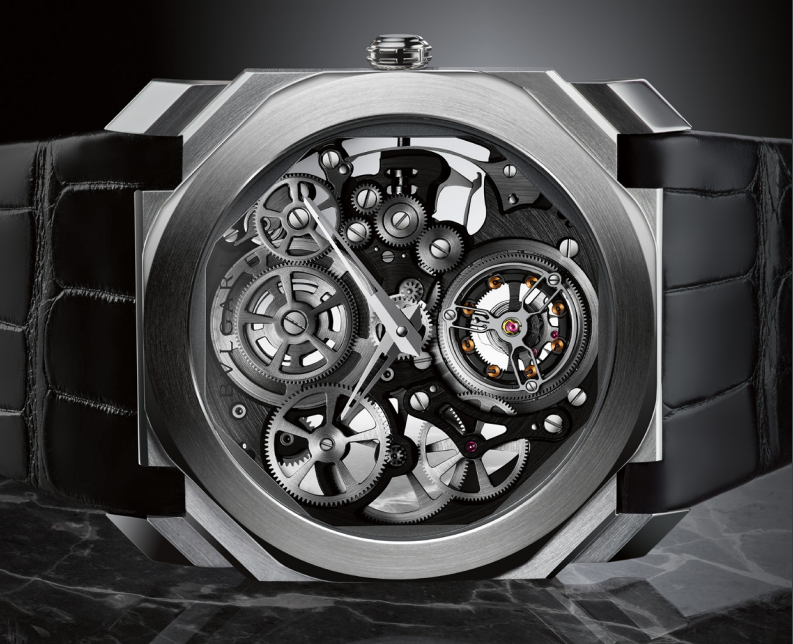 Bulgari is a skeleton watch inspired by the legendary Gérald Genta.

Following Genta’s death in 2011, the Rome-based firm has continued to honor his legacy with versions of the Octo that remain true to their creator. At the Golden Globes the success of the venture could be seen on the wrists of Colin Farrell and Jeff Bridges. Both of whom were sporting Ottos with their tuxedos. And now in the run-up to BaselWorld Bulgari, which declares that “watchmaking is a temple dedicated to worshipping a passion for beauty” with the Octo as its “main pillar”, has unveiled two precious “powerful reinterpretations” of the iconic watch. The most impressive new offering is a skeletonised interpretation of the top-drawer Octo Finissimo Tourbillon, which Bulgari says is the world’s slimmest tourbillon. 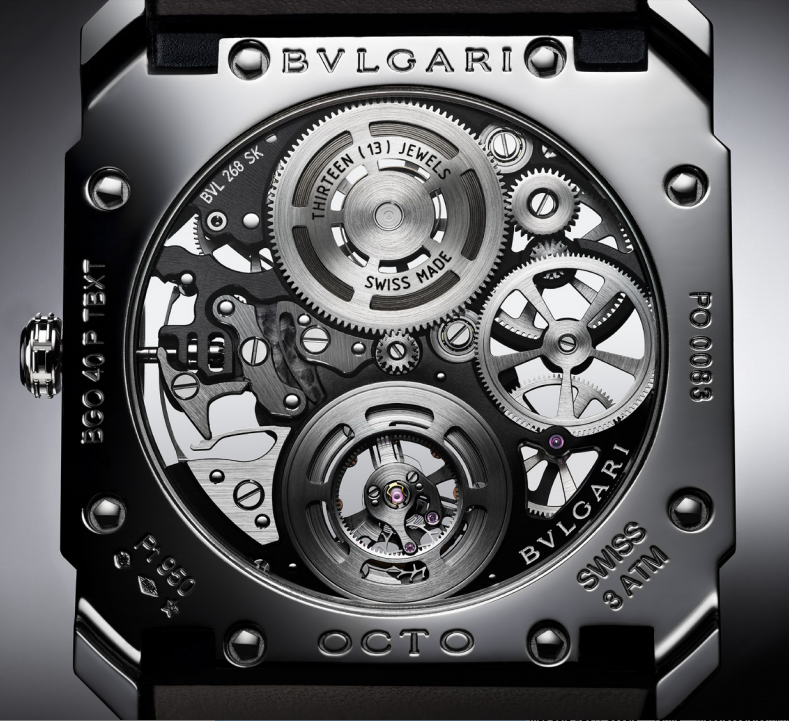 The back of the Bulgari Octo, notice all the small and fine details of the watch.

The tourbillon is, as Bulgari notes, “the most delicate and coveted of horological complications.” Created to compensate for the effects of gravity on the running of a watch. The Bulgari Manufacture’s BVL 268 Finissimo calibre, which holds the world record for the slimmest tourbillon movement, powers the Octo Finissimo Tourbillon Skeleton with its beautiful inner workings on view inside the 110-facet case with its perfectly balanced proportions. Bulgari now calls the Octo an outstanding example of Italian design and draws parallels to Leonardo Da Vinci. We’re sure Genta wouldn’t mind – as long as they don’t forget him altogether. 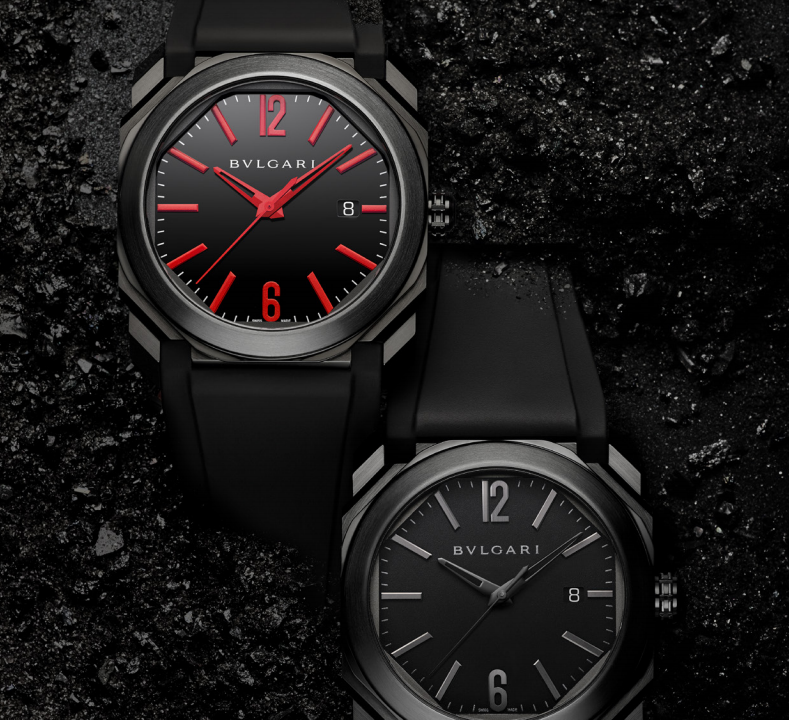 The slimmest tourbillion was created by the legendary Gérald Genta.

Bulgari’s second and third new Octo watches are stealthy versions of the Octo Ultranero. The watch is presented in all-black or with red contrasting hands and hour-markers. The “powerfully structured” cases boast a black D.L.C. (Diamond Like Carbon) treatment which aims to be “equally at home in an atmosphere of urban elegance as it is in life’s more sporting moments.” The masculine timepiece is “complex yet it seems very simple, [and] geometrical but not at all inflexible. It is elegant while always maintaining a certain relaxed aura that is the spice of life.” The result is a watch that is “both iconic and very much out of the ordinary.” As time goes on the Octo cult is bound to increase in strength and numbers. Are you ready to sign on…?