The Vacheron Constantin Overseas has been a bit of a hot topic over the last couple of years, ever since the initial unveiling of its redesign in 2016. New in-house calibers, a refreshed overall design, and a very clever quick-change strap system were all part of the equation, and aside from a few gripes over the chronograph and the displacement of date indication from a dual disc configuration at 12 o’clock to a much more conventional (and a bit boring) single disc display at 4:30, the updated line has been very well received. For 2018, the brand has updated another pair of models from the Vacheron Constantin collection, most notably the Overseas Dual Time, whose dial layout (as you can see here) has been significantly altered when compared to its predecessor. Having spent a few weeks with this new gem on the wrist, we’re going to dive into a more in-depth examination of this crisp new model. 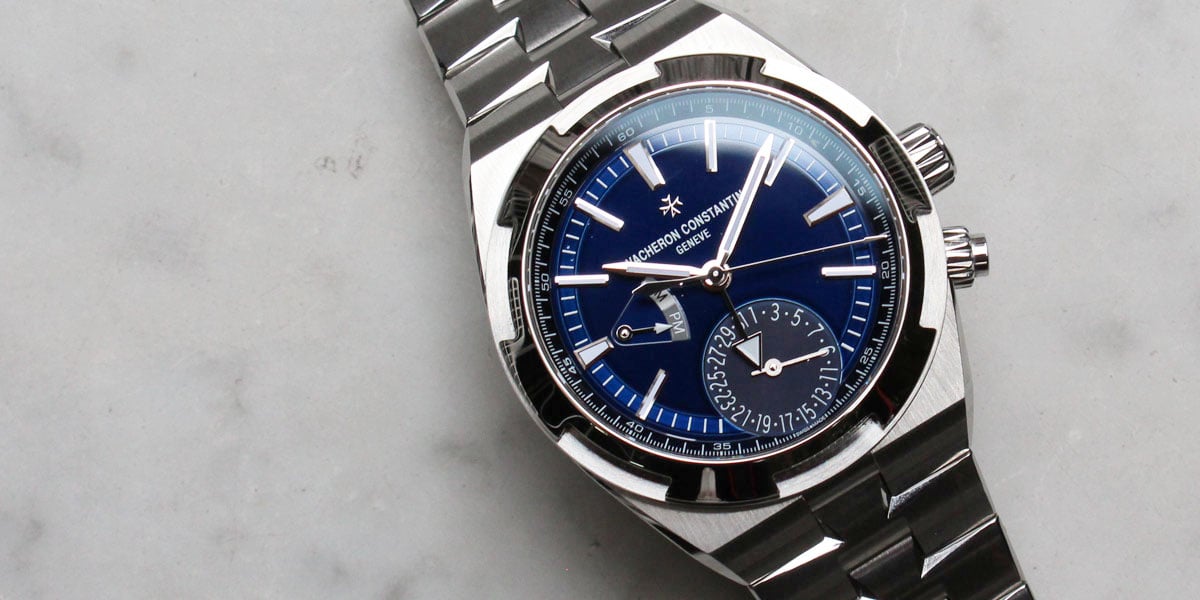 Here is an over of the Vacheron Constantin Overseas Dual Time.

Right out of the gates, there’s a lot to love about the new design of the Overseas, especially in this configuration. Its vibrant blue hue, the same one that garnered significant praise in the initial launch, is just as pleasing to the eye as ever. Though debated by some, it still ranks as one of our favorite blue dials on the market right now. Though more complicated, the Dual Time’s case diameter matches that of the simple 3-hand automatic version, coming in at 41mm (and 12.8mm thick). Having spent some time recently with the chronograph and world timer variants, the more compact case size is instantly notable, though it certainly isn’t shy on the wrist. 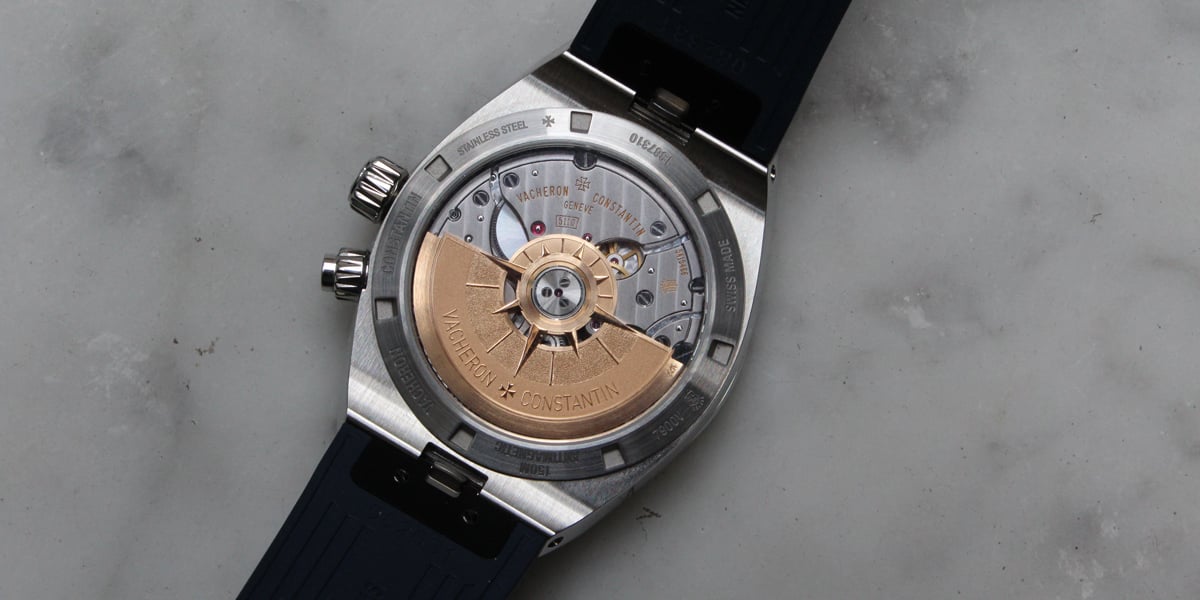 Focusing in on its dial, the best way to describe the update would have to be “similar but oh so different.” The most practical changes are simple. Its second timezone is now displayed via a central hand rather than on its 6 o’clock subdial, and its AM/PM display is now more prominently displayed at 9 o’clock using a pointer hand. For the sake of clarity, the hand stays static on either AM or PM until 12:45, then migrating to the line between indications at 12:00, and completing its sweep to its new position by 30 minutes past the hour. This new indication takes the place of the power reserve indication from the prior model, which is now no longer displayed. Generally speaking, we aren’t too fussed about having a power reserve indication on a self-winding watch, so we don’t feel that the new Dual Time is at any sort of deficit on account of the change. If anything the previous model always appeared a bit busy or cluttered, whereas this new design cleans things up a significant amount. Also a matter of personal taste, Vacheron has opted for a glossy sunbrushed dial rather than the hobnail-esque texture seen before. That texture certainly was one of the more endearing traits of the past Overseas, and its removal no doubt helped Vacheron cut a little production cost. That said, the new dial is still quite impressive in the metal, and does not feel as though it “cheapens” the watch in the least. 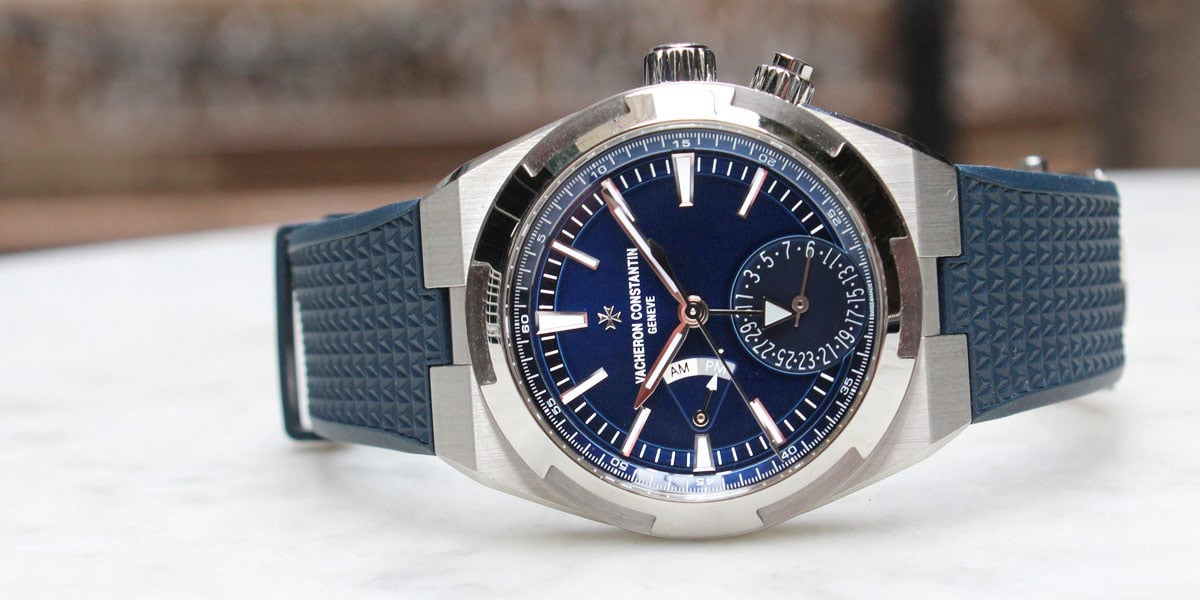 The Vacheron Constantin Overseas Dual Time has a sunburst dial which compliments the complexity.

The general operation of the Vacheron Constantin Overseas Dual time is straightforward, though not without its quirks. A three-position crown handles quick-set of local time, as well as standard time setting, while its screw-down pusher at four o’clock handles rapid-fire setting of its date. On one of my first outings with the Dual Time I crossed paths with a fellow enthusiast wearing the Patek Philippe Aquanaut Travel Time, who quickly raised a very important point in the category. Though certainly more complex to execute, the biggest practical selling feature of the Patek is its push-button local time setting. Having to unscrew and turn the crown to quick-set on the Vacheron is by no means rocket science, but the fact that the piece has a push-button as part of its design already, this would have been a logical place to quickly add to its practical appeal. Considering its screw-down crown and quick-change rubber strap, the Overseas line is meant to travel, and there’s no doubt this kind of caliber modification would only help the brand win over even more fans looking for the ultimate luxury sports watch. 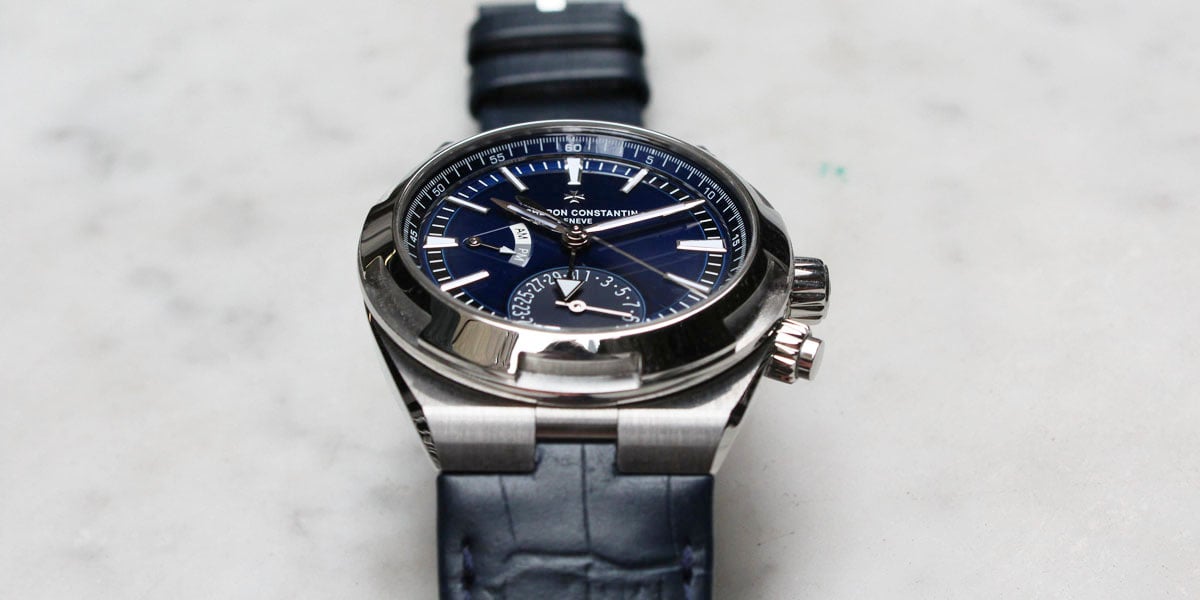 The Vacheron Constantin Overseas Dual Time is a gorgeous watch.

On the topic of straps, this is simply a category where VC blows just about everyone out of the water. The quick-change system (one that allows for fairly idiot-proof strap changes in a matter of seconds) is one of the better examples in the category. Personally, I still find myself most partial to either the rubber strap or the bracelet, owners of the new Overseas are not forced to choose. All three strap combinations (bracelet, rubber, and leather) come with the watch at no additional cost, and moving its deployant clasp between the two straps is equally painless. If anything, the action of its deployant takes a bit of getting used to for a pair of reasons. First, the pivot point used for removal can be a bit unnerving the first few times you put the watch on, and you may have a mild heart attack as you feel it rotate while slipping the watch on your wrist. Don’t worry, this is totally normal, and something you’ll get used to quickly. Second,the first half of its butterfly closure does not snap in with the same firmness as most deployant clasps, and requires a touch more fussing, especially if you’re trying to tuck the tail of the strap into its keepers as you’re closing it up. Again, don’t let this be a deterrent, as the whole thing becomes quite second-nature before long. 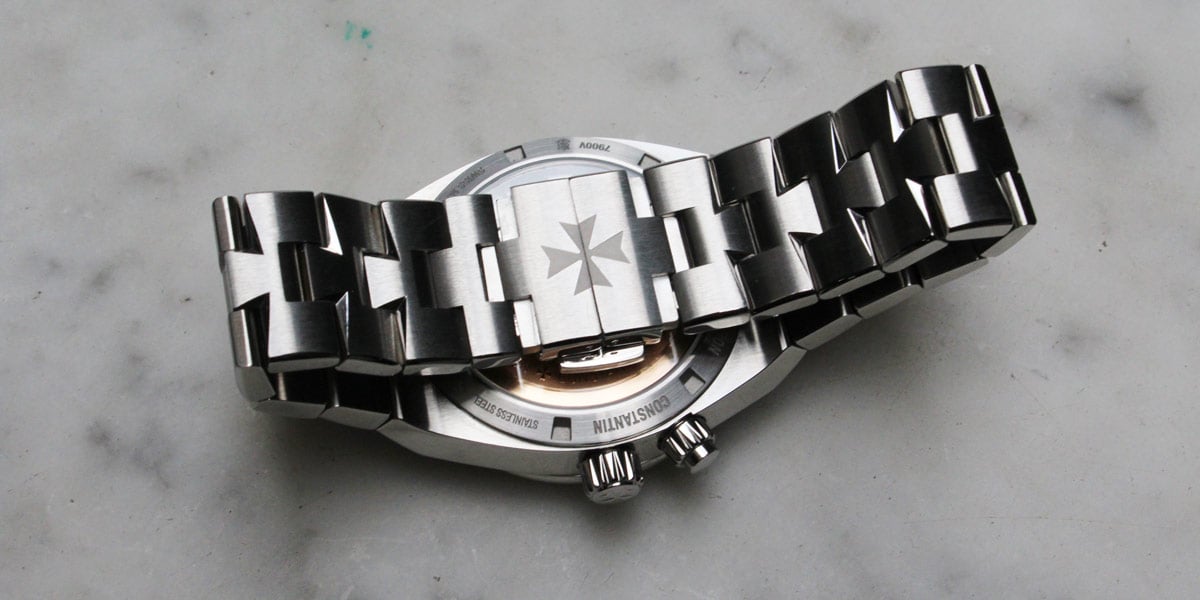 The bracelet on the Vacheron Constantin Overseas Dual Time very different from your typical Rolex bracelet.

Minor gripes aside, the Overseas Dual Time is a very solid update from VC that’s worthy of your consideration. When talking mainstream luxury brands there aren’t a lot of direct parallels to be had. Priced at $24,700 in steel, the Dual Time is still a significant bargain when compared to the previously mentioned Aquanaut Travel Time, whose sticker price comes in more than $10k north of the VC. On the flip side, those not ready to level up the the fantastic finishing of this piece could still be satisfied by the Rolex Sky-Dweller that launched in steel last year for $14,400.