Considered by many to be the most prestigious sailing event in the world, the America’s Cup has a rich history that dates all the way back to 1851. Omega’s role as Official Timekeeper of the race first started in 2000 and over the years, the brand has released a number of different America’s Cup edition watches to celebrate the partnership. The latest commemorative edition is based on the Omega Seamaster Diver 300M Chronograph and includes a number of America’s Cup-themed design elements, along with several functions and features specifically designed for the world of yacht racing. 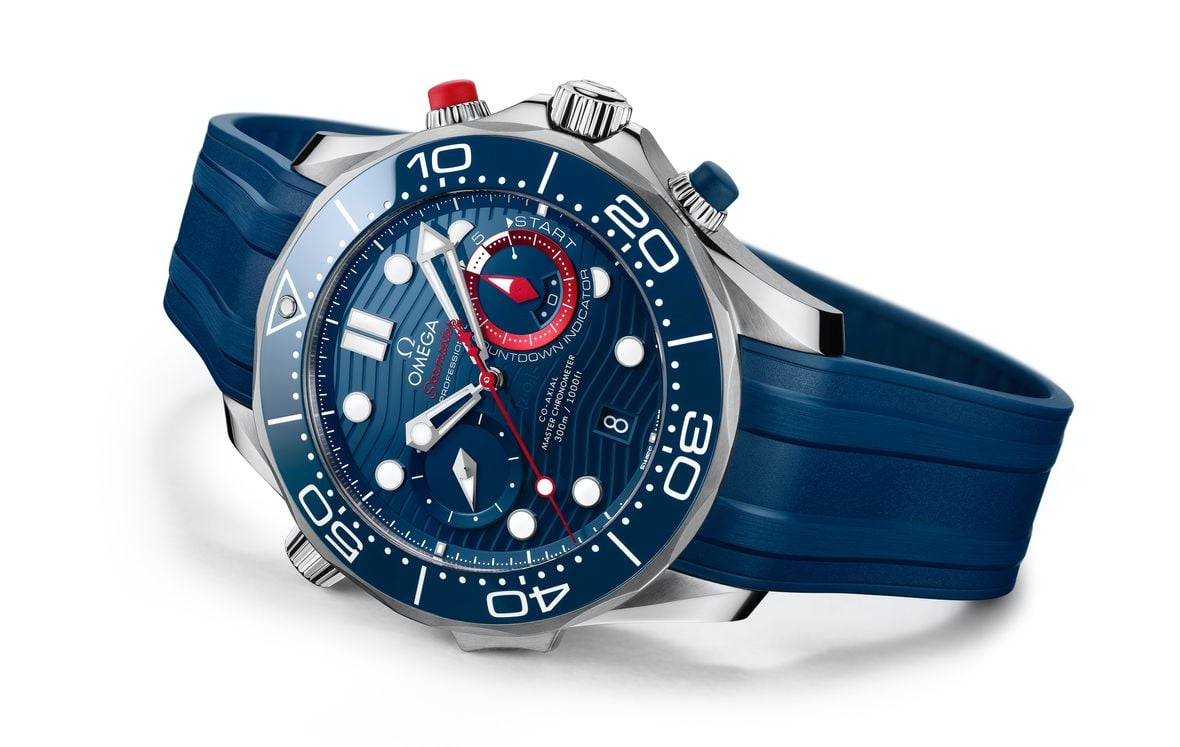 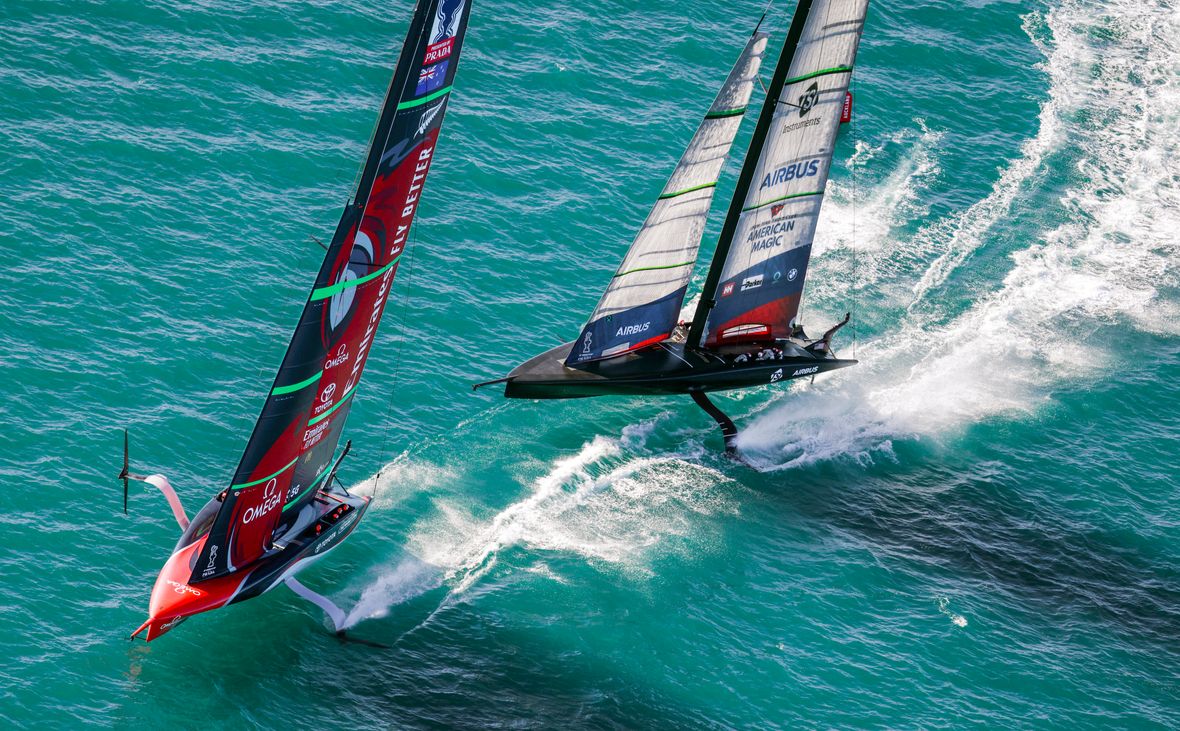 The 36th edition of the America’s Cup yacht race is set to take place from the 6th to the 21st of March in the Waitematā Harbour of Auckland, New Zealand between Emirates Team New Zealand and Luna Rossa Prada Pirelli of Italy. The two teams are once again facing each other, a full 21 years after their first matchup in 2000, which was the first time that Omega served as the Official Timekeeper of this prestigious sailing event.

This will be the third time that Omega has been the Official Timekeeper of the America’s Cup, with the previous two instances being in 2000 and 2003. Additionally, Omega has a long-standing partnership with Emirates Team New Zealand – a relationship that first began alongside legendary sailor Sir Peter Blake in 1995, and the brand has also produced a number of special edition watches that celebrate the partnership.

The America’s Cup (sometimes referred to as the Auld Mug) is awarded to the winner of the match races between two competing yachts – with one known as the defender, represented by the yacht club that currently holds the America’s Cup and the second, known as the challenger, represented by the club that is challenging for the title. As the Royal New Zealand Yacht Squadron won the proceeding 35th America’s Cup in 2017, they will be the defending club (along with being the ones that organize the 36th America’s Cup match itself), while the Circolo della Vela Sicilia will be the challenging club.

The new Omega Seamaster Diver 300M America’s Cup Chronograph is based upon the current generation of Seamaster chronographs and is powered by the brand’s Co-Axial Caliber 9900 movement, which boasts Master Chronometer certification and an accompanying antimagnetic rating of up to 15,000 gauss. While the overall aesthetic very closely follows that of the existing collection, there are a number of features that are unique to the watch and specifically designed for the world of yacht racing.

The 44mm stainless steel case is fitted with a unidirectional rotating bezel furnished with a blue ceramic insert with a white enamel 60-minute timing scale that matches its blue ceramic dial. Like other current-production Seamaster Diver 300M watches, the ceramic dial is laser engraved with the collection’s signature wave pattern design, and the watch includes a manually operated helium escape valve located on the side of the case near the 10 o’clock position. 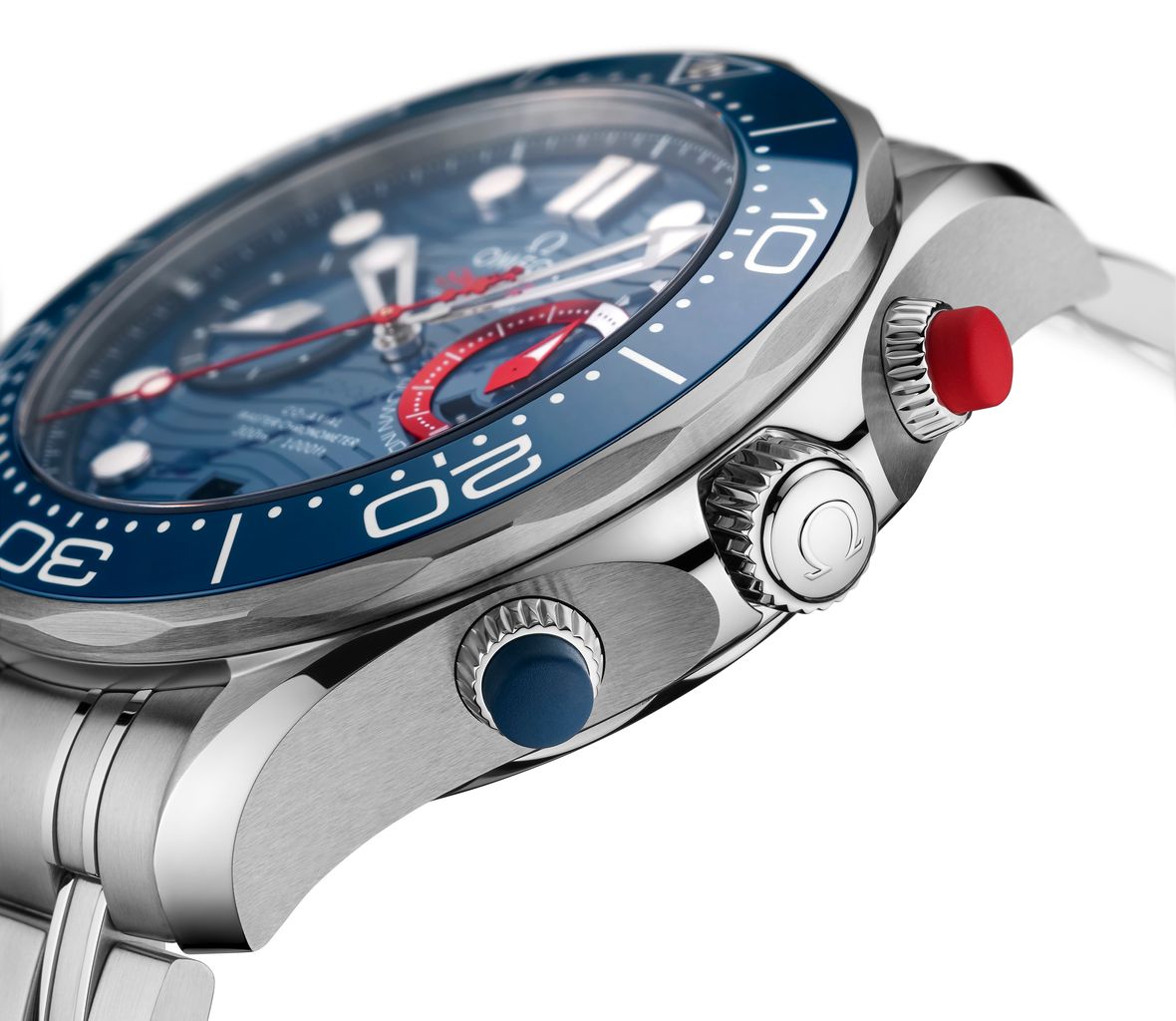 In place of the standard chronograph counter at the 3 o’clock position, the new Omega Seamaster Diver 300M America’s Cup Chronograph features a unique regatta countdown indicator ring in red anodized aluminum. As to not sacrifice the greater chronograph functionality of the watch, the register also includes a rotating hour disc underneath the sub-dial to maximize the at-a-glance legibility of the countdown display.

Completing the dial of the watch are luminous hour markers with a window for the date display at the 6 o’clock location. Continuing with the aesthetic established by the regatta countdown indicator ring are a red anodized aluminum chronograph minute hand and a rhodium-plated running seconds hand that are inspired by the shape of a boat hull. The central seconds chronograph hand, which also appears in red anodized aluminum, features the outline of the America’s Cup trophy on its counterweight, creating a cohesive overall appearance that sacrifices nothing in regards to legibility or performance. 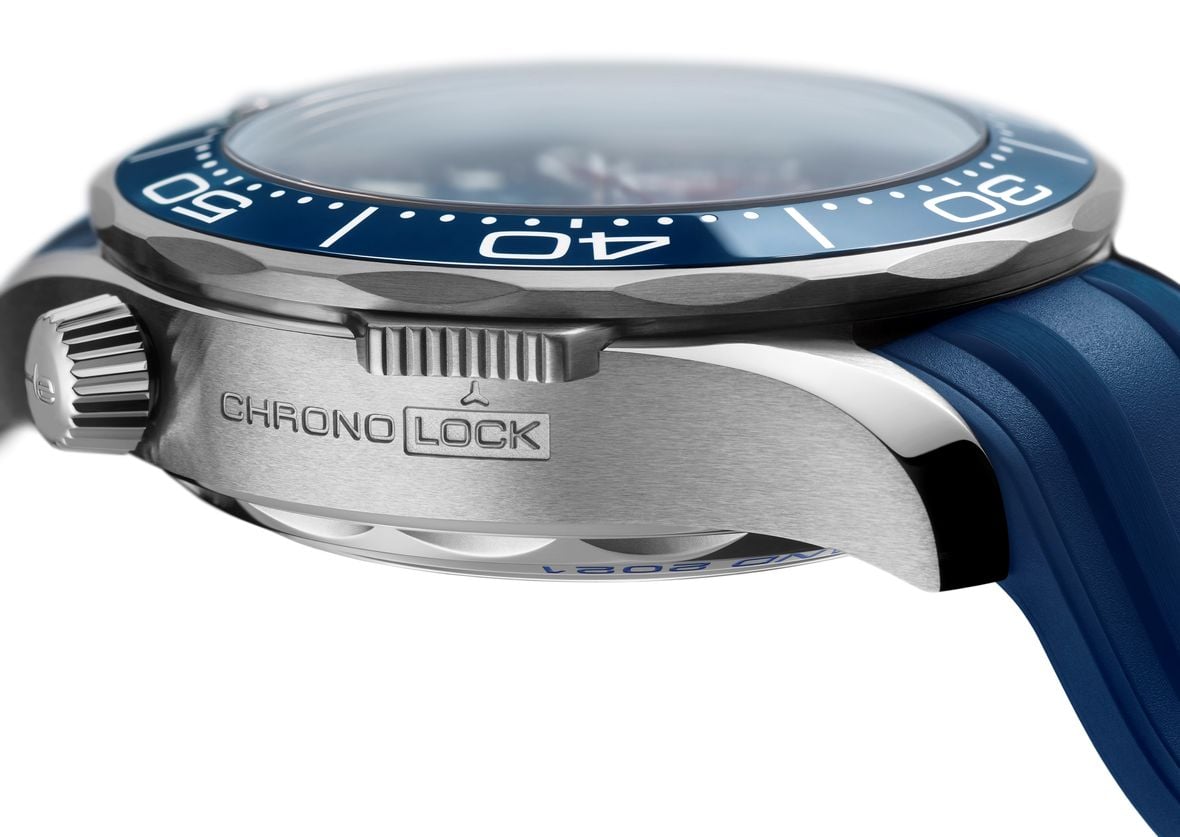 The chronograph and accompanying countdown indicator ring are activated by soft-touch rubber pushers that are ergonomically designed to offer maximum response and grip during the extreme and often wet conditions present during a regatta. Color-coded with the start/stop pusher in red and the reset pusher in blue, the rubberized chronograph pushers continue with the blue and red color profile established by the dial and hands.

To prevent accidental activation of the chronograph while sailing, the new Omega Seamaster Diver 300M America’s Cup Chronograph is fitted with the brand’s exclusive CHRONO LOCK system, which appears as a sliding switch positioned between the bezel and case near the 8 o’clock location that allows users to secure the chronograph features when needed, eliminating the possibility of inadvertent activation and any resulting errors in time measurement during the heat of a race.

Omega has also chosen the new Seamaster Diver 300M America’s Cup Chronograph to debut its new proprietary quick-release bracelet mounting system. Unlike certain other manufacturers’ quick-change strap systems that can only use proprietary bracelets and straps, the case and lugs of the new Omega Seamaster Diver 300M America’s Cup Chronograph are of an entirely standard design, which means that any traditional strap can be fitted to the watch with normal spring-bars should you wish to use something beyond the included options.

The watch is delivered with both a stainless steel bracelet and a blue rubber strap fitted with a stainless steel tang buckle that perfectly matches the blue ceramic dial and bezel. The included metal bracelet and rubber strap both feature a small push button positioned on the lower side near where they mount to the case. A simple push of the button retracts the ends of the built-in spring-bars to allow users to instantly swap bracelets on the fly and without the use of any tools. While this is the first watch from Omega’s lineup to feature this new quick-release bracelet mounting system, we wouldn’t be surprised to see it featured on other models in the future. 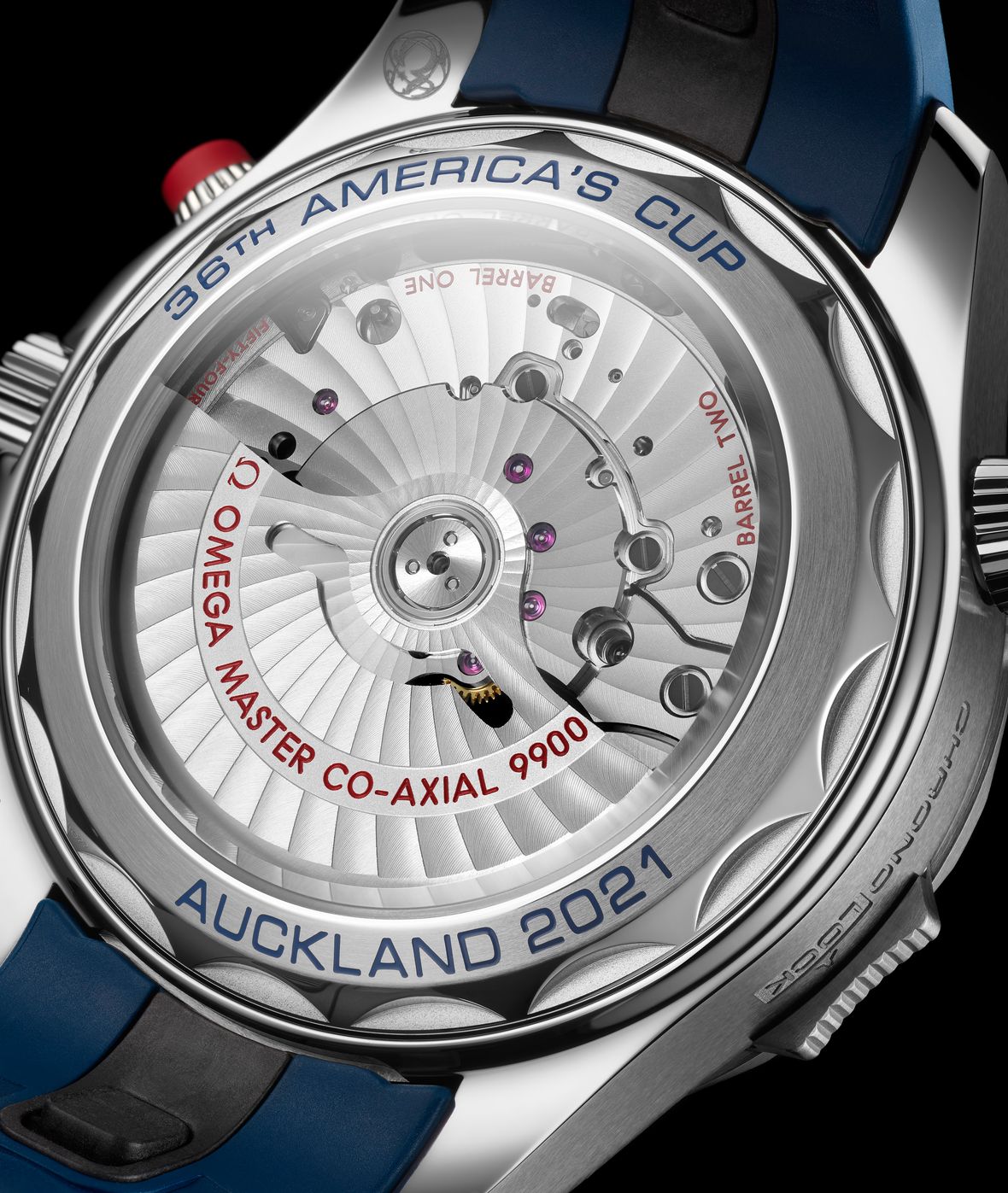 Completing the new Omega Seamaster Diver 300M America’s Cup Chronograph is a case-back that features both the event and year that it commemorates. Engraved along the perimeter of the clear sapphire display case-back are “36th America’s Cup” and “Auckland 2021” – both of which are filled with blue lacquer to match the ceramic dial and bezel.

Unlike some special release Omega watches, production of the new Seamaster Diver 300M America’s Cup Chronograph will not be strictly limited to a specific number of examples, so those interested in purchasing one will have a significantly better chance of actually being able to add one of these unique Omega regatta chronographs to their collections. With that in mind, the watch is intended to commemorate the 36th America’s Cup, so it will not be a long-standing permanent offering in Omega’s catalog, and those that do wish to purchase one should act swiftly while it is still available at a retail level.

Completing the watch is a special-edition presentation box that contains the extra blue rubber strap and all included warranty cards and accessories. Keeping with the theme of the watch, the presentation box is finished in the red and blue colors of the America’s Cup race and includes the event’s logo, further commemorating the 36th edition of this iconic sailing competition. 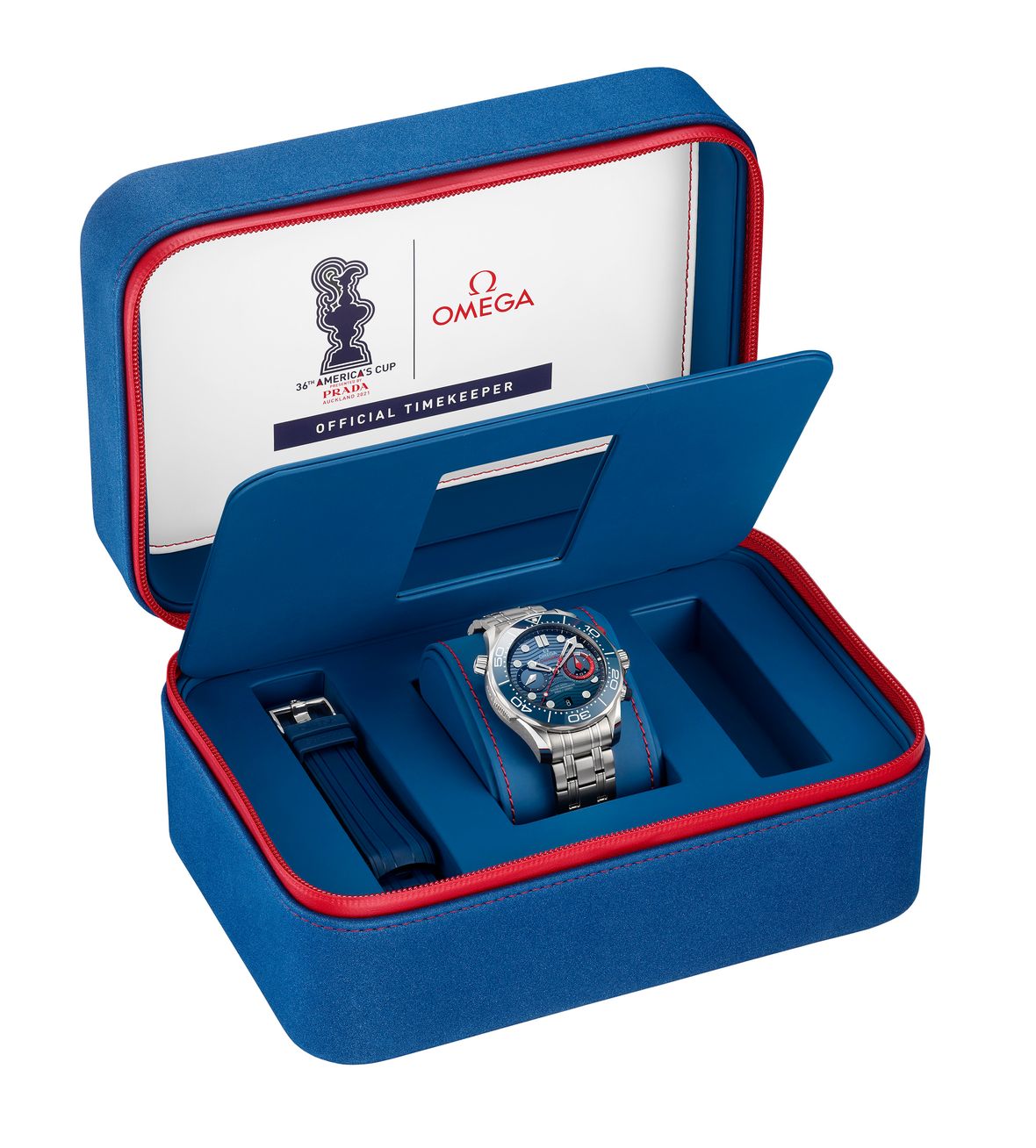 Previous Article What Is the Difference Between the Rolex Submariner and the Rolex Sea-Dweller?
Next Article Everything You Need to Know About Watch Winders