While some luxury watch brands are known for never producing collaborations or limited-edition pieces, there will reliably be at least a handful of different special-edition Omega watches launched each year. The historic Swiss watch manufacturer sometimes draws criticism from the collecting community for the number of special-edition models that it produces, but in reality, these watches only add to the diversity of its catalog and provide buyers with more options. Additionally, some of these models help promote charities and other worthwhile causes.

The latest new release from the brand is the Omega Seamaster Diver 300M Nekton Edition. A special edition of the classic Seamaster Professional Diver, the new special edition watch celebrates Omega’s partnership with Nekton, a non-profit research foundation that is committed to promoting scientific exploration and protecting the world’s oceans. 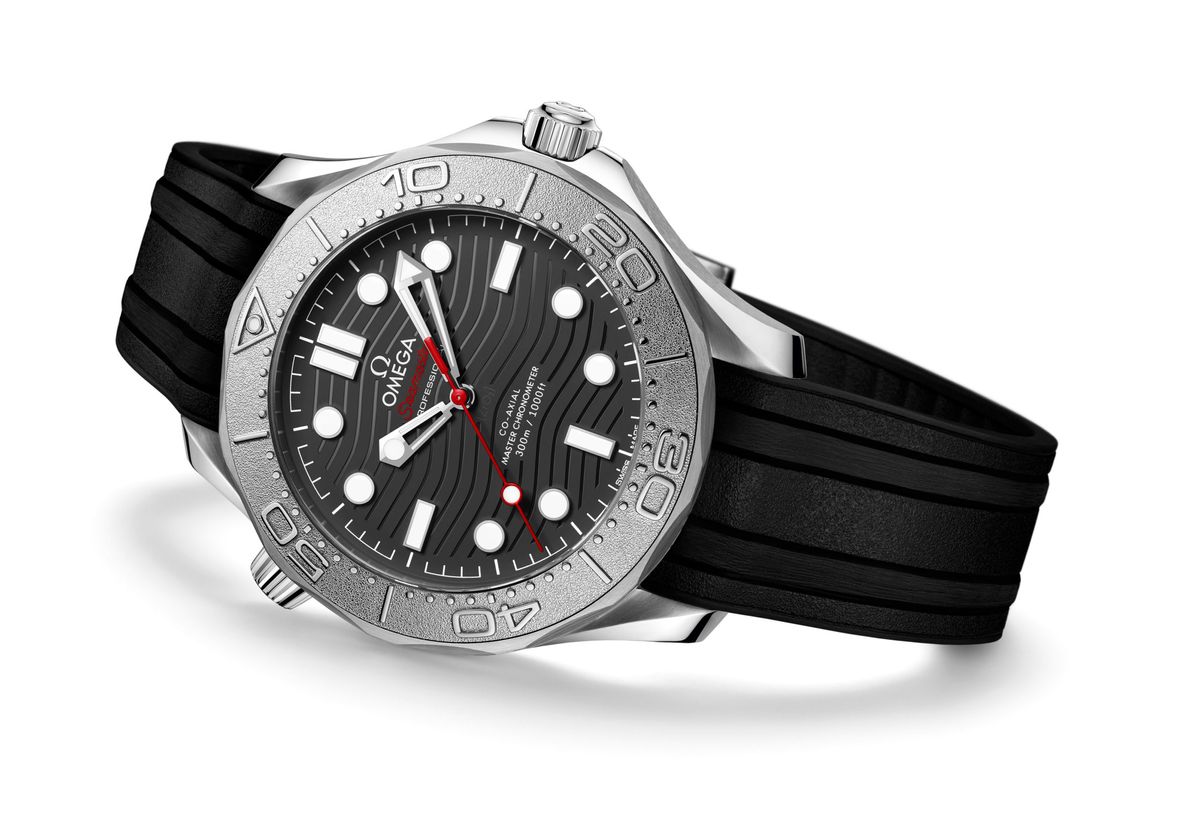 Crystal: Domed sapphire with anti-reflective treatment on both sides 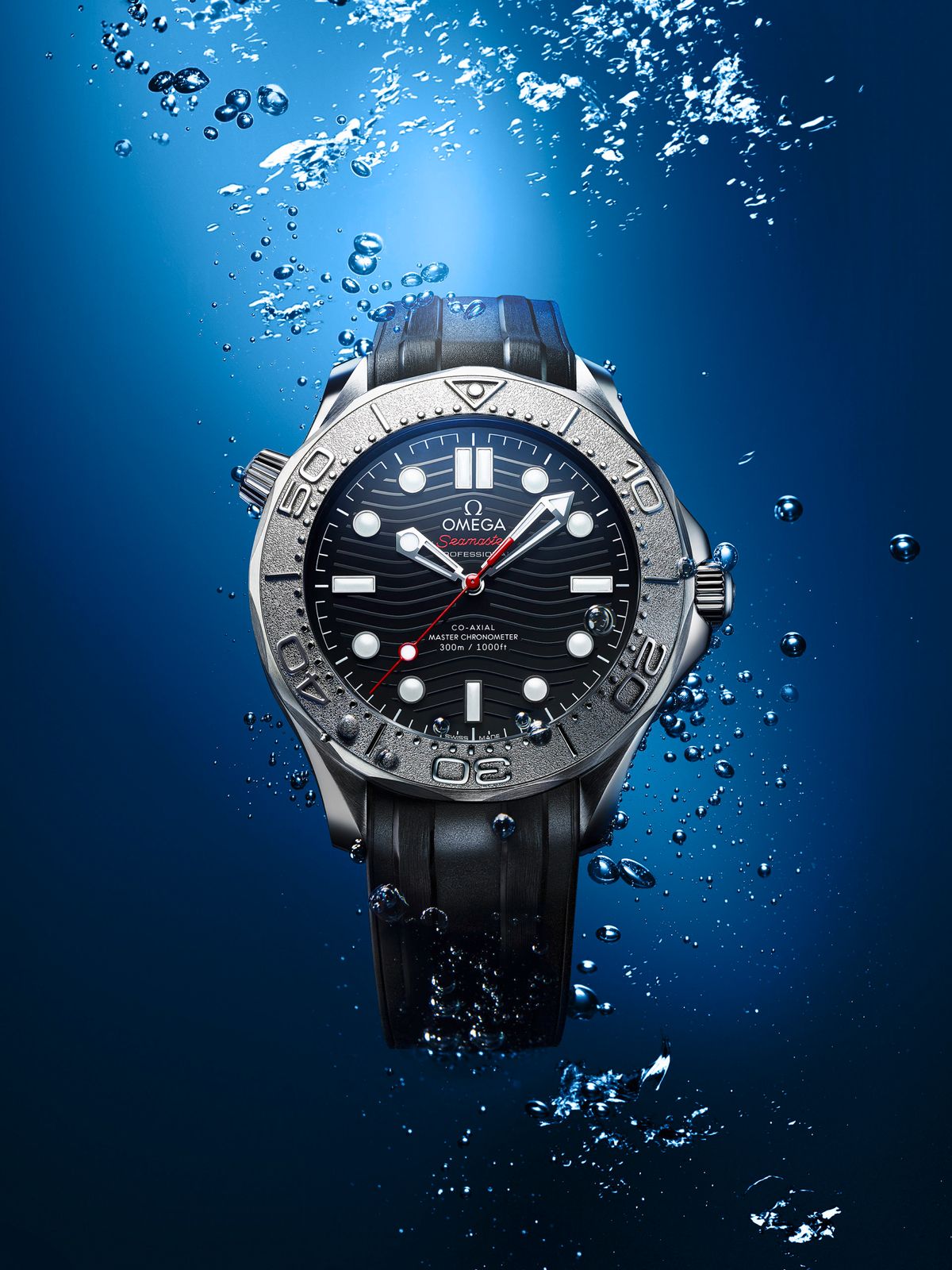 The Omega Seamaster and Nekton

Omega Seamaster watches have a long history of conquering the depths of the ocean. The very first Seamaster model debuted in 1948 to celebrate Omega’s 100-year anniversary, and the brand’s first purpose-built dive watch (the Seamaster 300) appeared in 1957 alongside the inaugural Speedmaster and Railmaster models.

Since then, the Omega Seamaster collection has expanded into a remarkably diverse collection of water-resistant timepieces, and the Omega Seamaster Planet Ocean Ultra Deep Professional holds the title of being the deepest diving watch ever created, capable of surviving the insane pressures found at 15,000 meters below the surface of the ocean.

‘Nekton’ is a zoological term describing aquatic animals that can swim against or independently of a current. However, the Nekton organization is a not-for-profit research foundation and registered UK charity that was founded in 2015 by critically-acclaimed broadcast journalist, Oliver Steeds. The organization works in collaboration with the University of Oxford with its primary focus on protecting the ocean and advancing scientific research and exploration.

Nekton’s ‘First Descent’ series of missions began in 2019 with Omega playing a strong supporting role. The primary purpose of the missions is to explore the Indian Ocean and promote conservation efforts in the area. According to the Marine Conservation Institute, only 8% of the ocean is in any kind of designated marine protected area. Nekton believes that a healthy planet is dependent on a healthy ocean and aims to increase this percentage with the global goal of 30% protection by 2030. 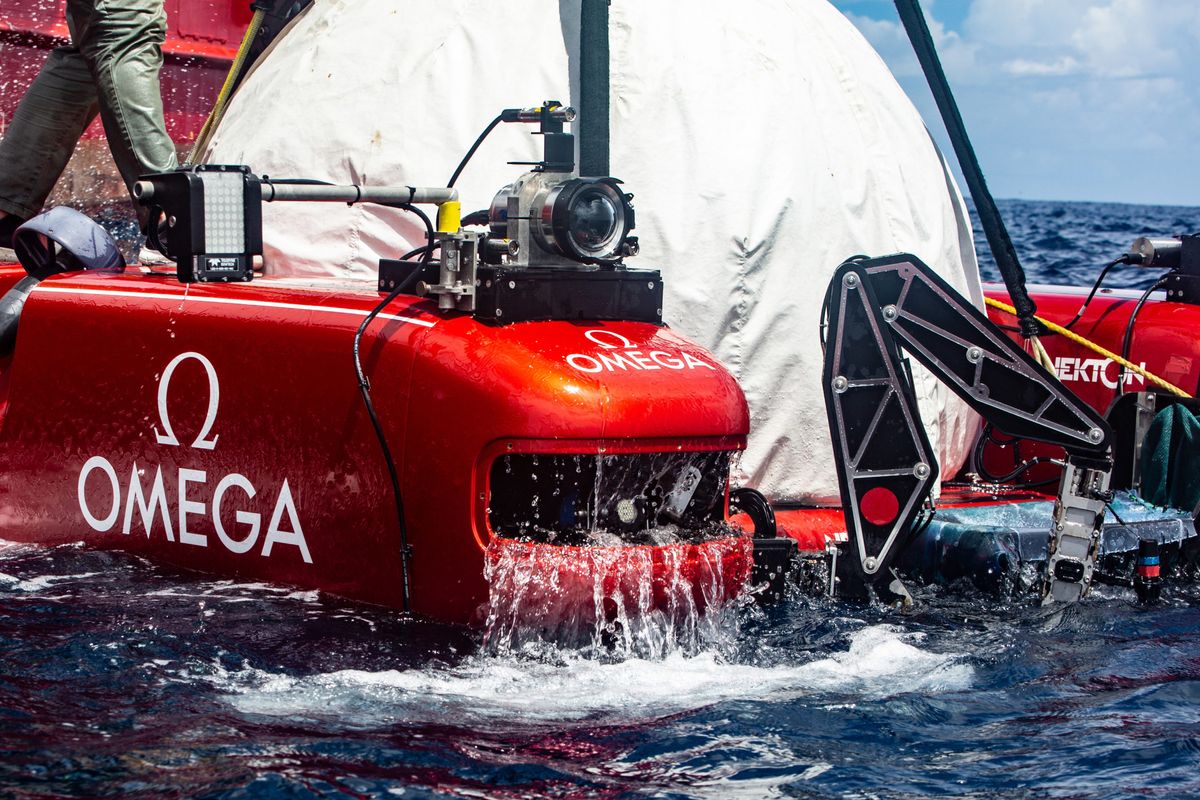 As Omega’s quintessential dive watch, the Seamaster Diver 300M is a highly appropriate model to represent the brand’s partnership Nekton. The Seamaster collection has served as the foundation for Omega’s relationship with ocean exploration and to this day, it remains the manufacturer’s go-to line of purpose-built underwater timepieces. The team at Nekton even named its research submersible “Seamaster 2” as a tribute to the boat skippered by the legendary round-the-world yachtsman Sir. Peter Blake, who was also a passionate advocate of ocean conservation and a close friend of the Omega brand.

Unlike the current version of the standard Seamaster Diver 300M by that features a date display at the 6 o’clock location, the new Omega Seamaster Diver 300M Nekton Edition is a time-only watch. Consequently, it is powered by the brand’s Master Chronometer Caliber 8806 movement (the no-date version of the Cal. 8800), which boasts a Co-Axial escapement, METAS chronometer-certification, a free-sprung balance with a silicon hairspring, and magnetic resistance in excess of 15,000 gauss.

Beyond the omission of a date display, the Omega Seamaster Diver 300M Nekton Edition is very much in-line with the rest of the models that make up the Seamaster Diver 300M collection. The 42mm stainless steel case is fitted with a unidirectional 60-minute timing bezel, a domed sapphire crystal, and a manually-operated helium escape valve at the 10 o’clock location. 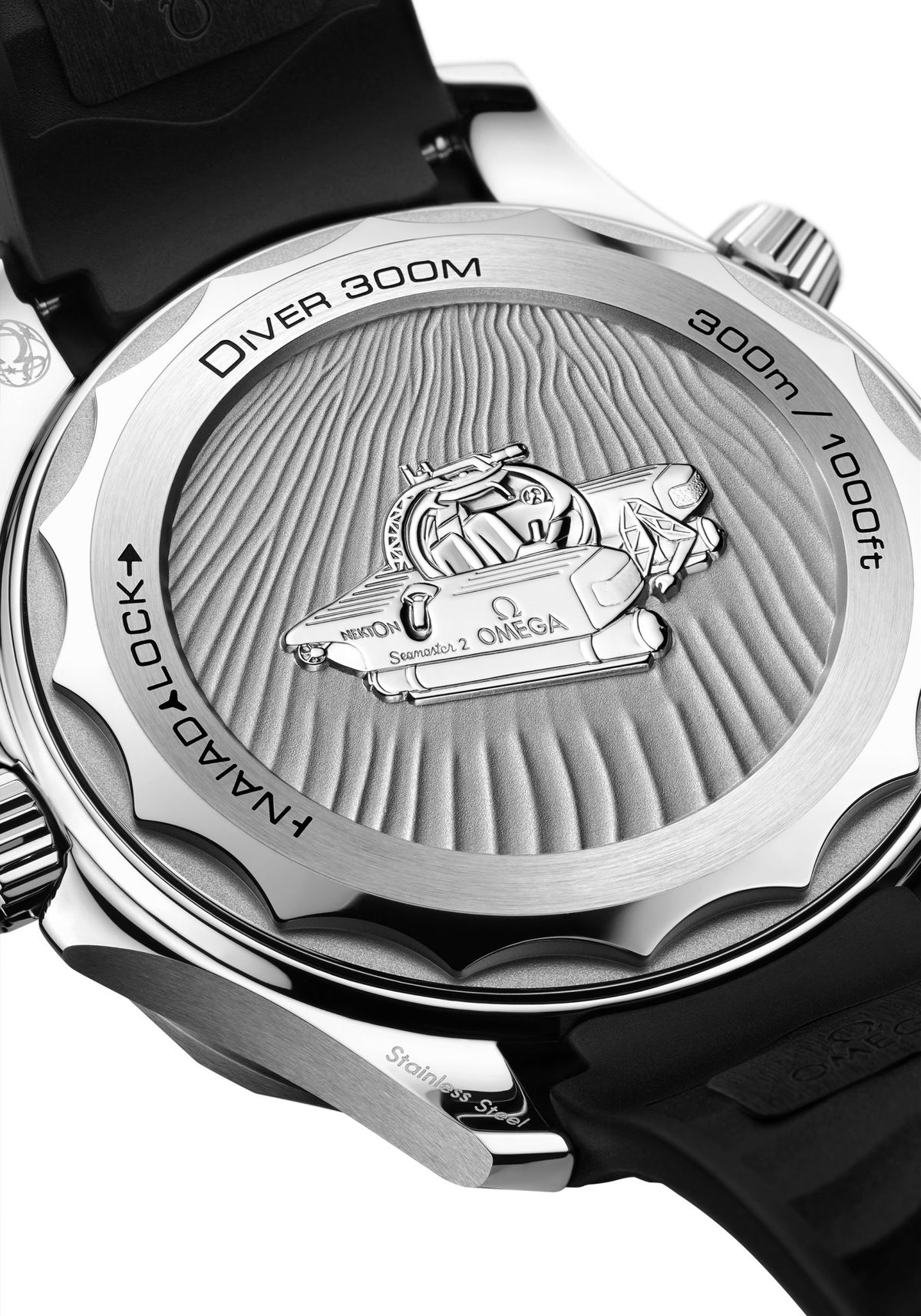 The most noteworthy differences between the classic Omega Seamaster Diver 300M and the new Nekton Edition are the bezel and case-back of the watch. Rather than being constructed from ceramic with a white enamel diving scale, the unidirectional rotating bezel on the Omega Seamaster Diver 300M Nekton Edition appears in grade 5 titanium and features a laser-ablated diving scale in positive relief.

While the standard Omega Seamaster Diver 300M features a clear sapphire display case-back, the Nekton Edition is fitted with a solid case-back that is decorated with an embossed Nekton submarine medallion. Like other case-backs fitted to modern Omega watches, the one fitted to the new Omega Seamaster Diver 300M Nekton Edition follows the brand’s Naiad Lock design, which guarantees that the text and image on the case-back will always be perfectly aligned.

With an official retail price of $5,850 for the rubber strap version and $6,150 for the stainless steel bracelet model, the Omega Seamaster Diver 300M Nekton Edition does represent a noticeable increase in price over the standard Diver 300M models. However, the new watch supports an incredibly worthwhile cause and allows buyers from all around the world to play a part in protecting the planet’s oceans, while also adding a new piece to their collections. 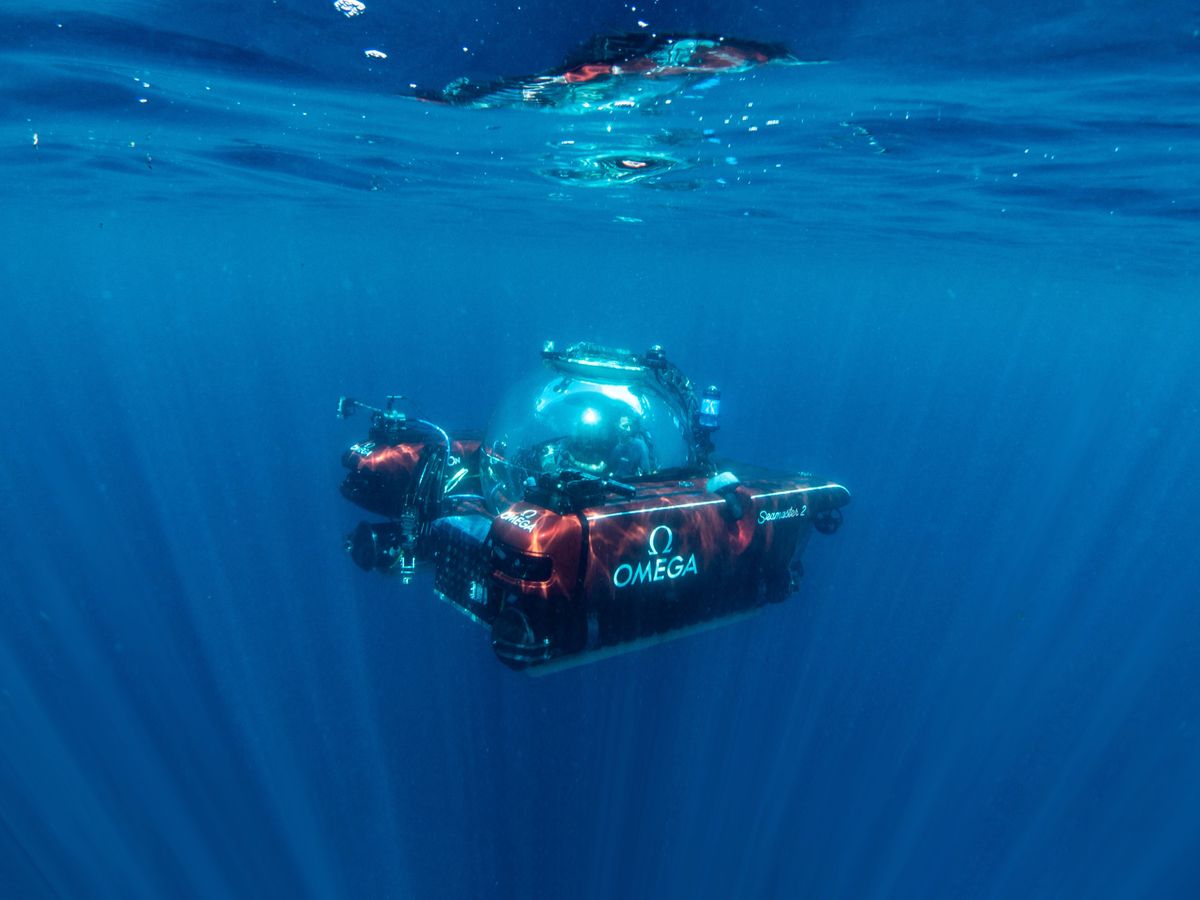