In recent years, Panerai has released a handful of watches equipped with so-called “California dials.” Characterized by a mix of Roman numerals, Arabic numbers, and geometric shapes, this dial style was actually patented by Rolex in the early 1940s. Read on to discover more about the history of Panerai California dials and the Rolex connection. 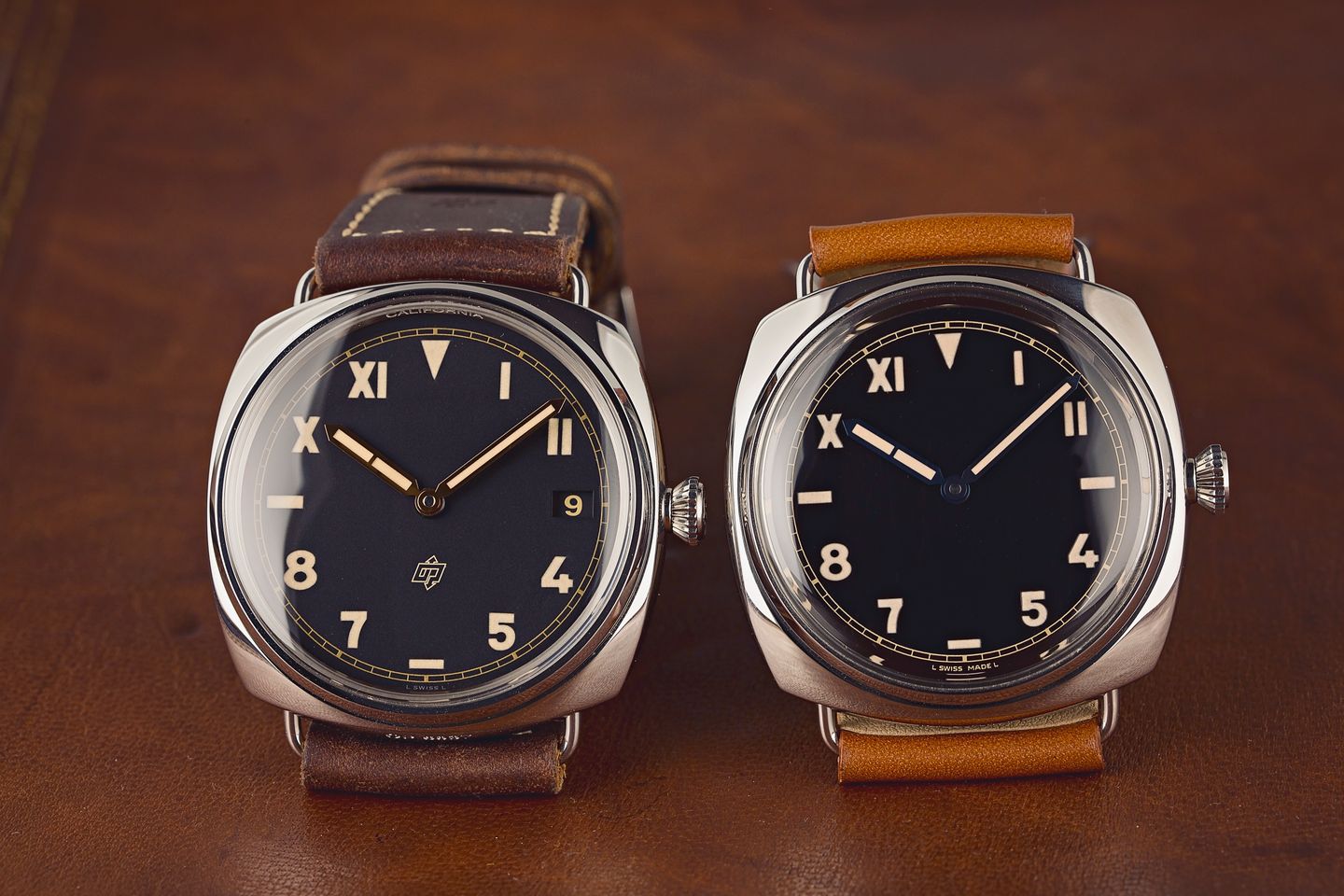 This unique style of dial is known as a “California Dial” among collectors. – but do you know why?

In 1941, Rolex filed a patent for a very specific dial design and was granted the patent (Brevet #221643) on July 15, 1942. The patent document is, of course, in French, but the first paragraph states (native French speaker here) that the patent is for the invention of a timepiece dial with hour markers made up of Roman numerals and Arabic numerals. It goes on to say that the appendix includes four examples of the dial invention.

Rolex’s original patent for the deign of the “California Dial” dates all the way back to 1941. (image: perezcope.com)

If you look at Fig.1 in the appendix, you will see that the top portion of the dial is home to Roman numerals while the bottom portion includes Arabic numerals. Accompanying these numerals are batons at 3, 6, and 9, along with the inverted triangle at 12 o’clock. The patent goes on to state that this particular arrangement will give a clear view of the hours, will be easy to create with luminous materials, and will allow easy reading of the time – especially within wristwatch cases, where the dials are relatively small. 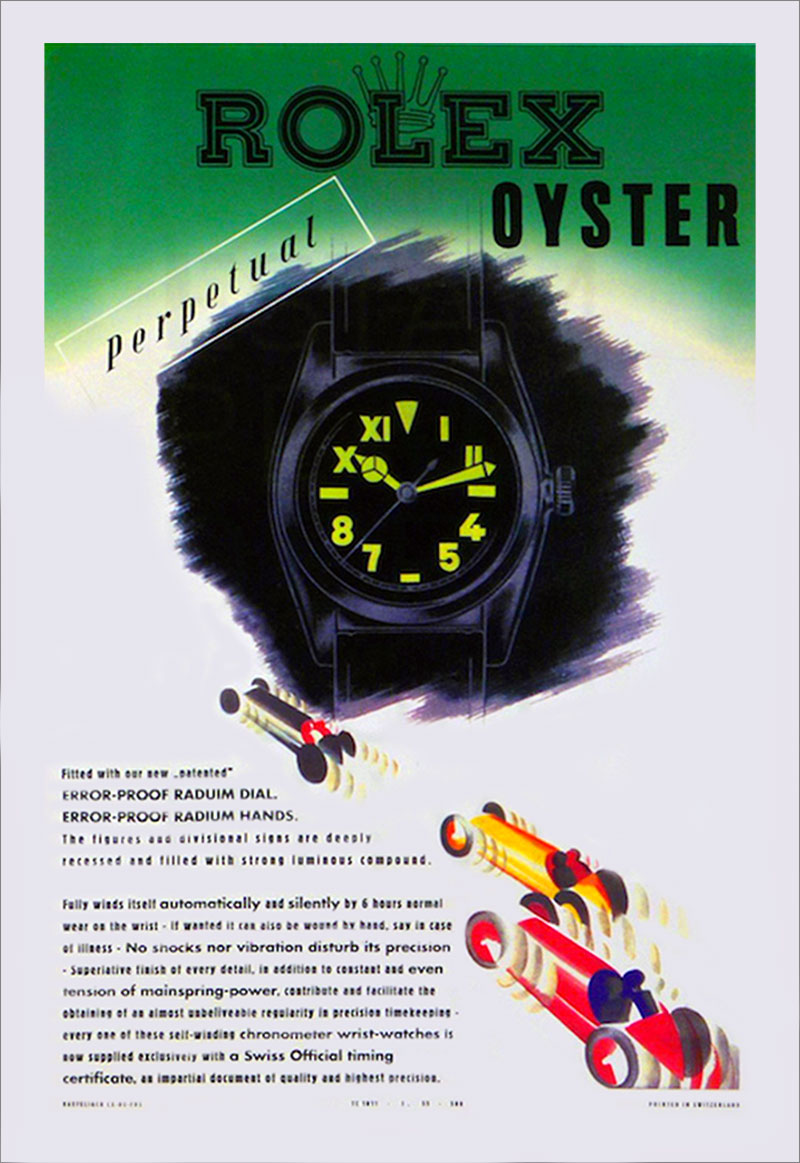 The patent does not include a specific name for the dial style, but in Rolex advertisements during that era, the copy says: “Fitted with our new patented ERROR-PROOF RADIUM DIAL. ERROR-PROOF RADIUM HANDS.” As you can see, there is no mention of the “California” dial, as this nickname only came about in the 1980s.

At the time, this style of dial was simply called an “Error-Proof Radium Dial” within Rolex’s various marketing materials. (Image: rolexmagazine.com)

According to blogger and Rolex historian Jake Ehrlich, there are several theories out there as to why this dial design picked up the “California” nickname. The most common theory revolves around the Rolex Bubble Back craze of the 1980s, when buyers (apparently quite a few from Japan) were looking for pieces with this particular dial layout. It appears that dealers based in Los Angeles were selling significant quantities of them to satisfy the demand, further helped by a local dial refinisher named Kirk Rich, who produced numerous dials with this configuration. Consequently, the “California Dial” name stuck. 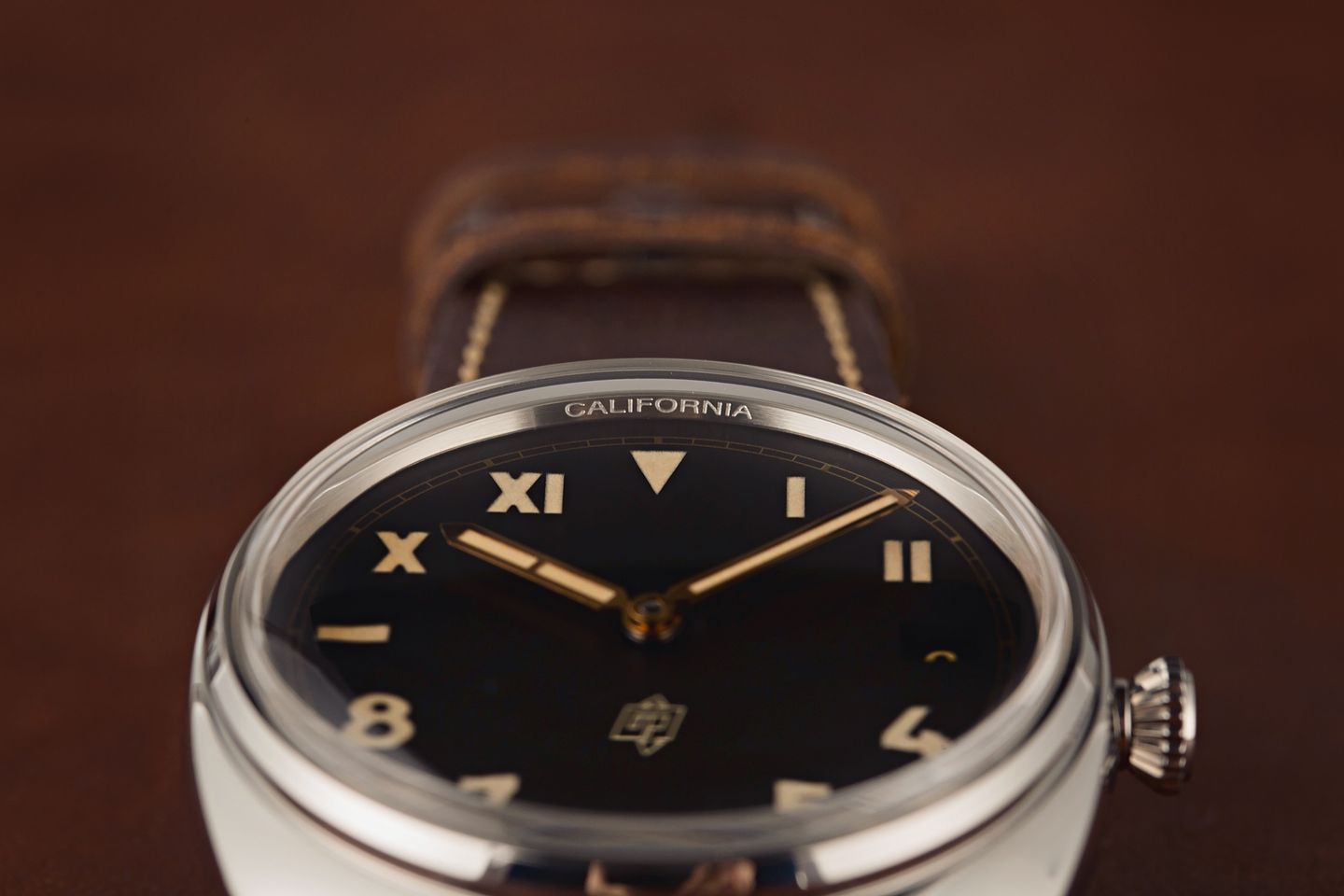 Rolex may not have ever formally recognized the “California” name, but Panerai certainly has embraced it.

Although Rolex never officially used the “California” moniker in reference to this style of dial, Panerai certainly has. The company frequently releases watches that are directly inspired by particular vintage models, and equips them with that they officially call California dials. As some of you may already know, it was primarily Rolex that supplied watches to Panerai in the mid-20th century with waterproof “Oyster” cushion-shaped cases and modified manual-would movements. 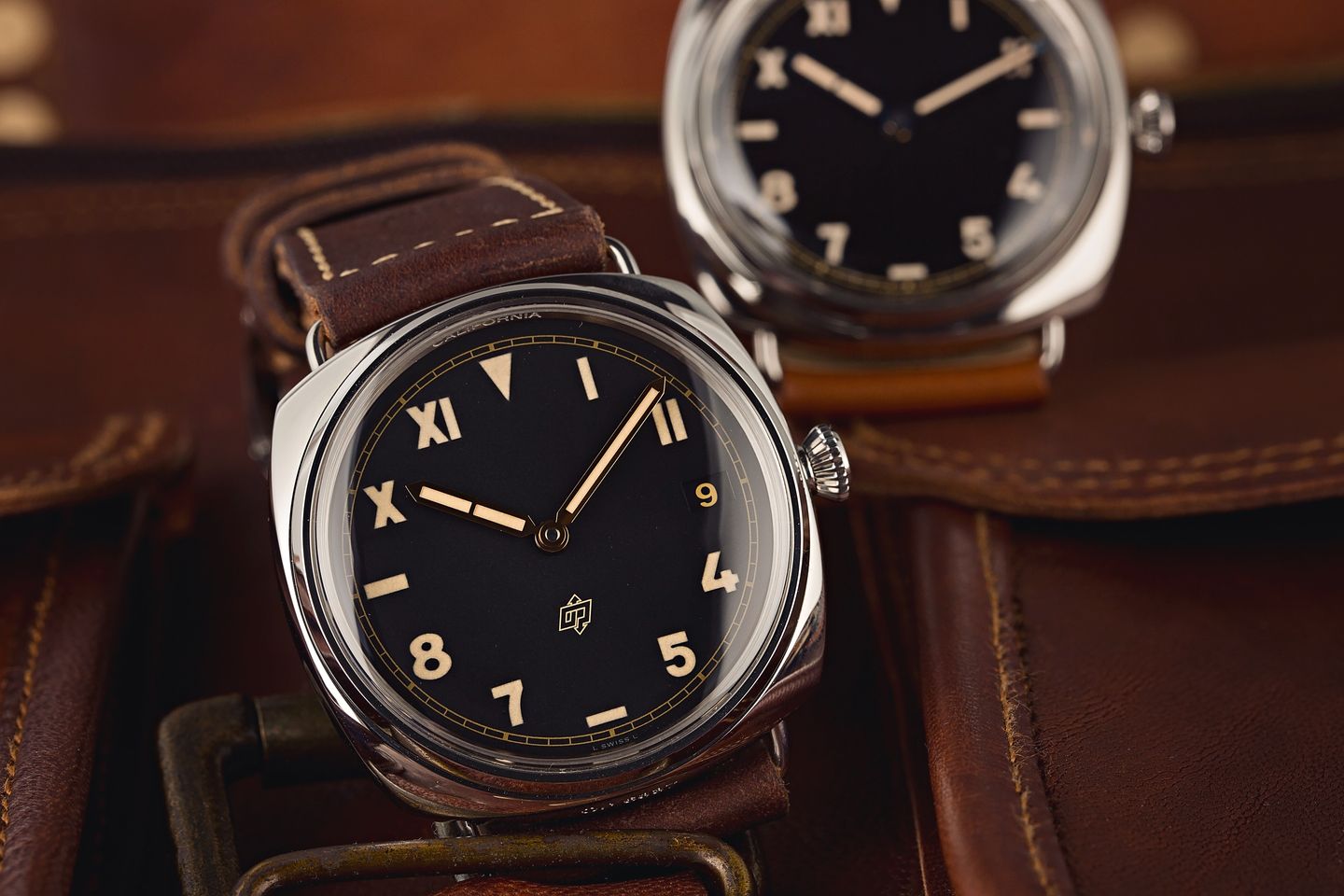 Using a mix of Roman numerals, Arabic numbers, and geometric shapes, “California Dials” offer a unique appearance, and often lend themselves to a love-it-or-hate-it kind of aesthetic.

According to Jose Pereztroika, a Panerai historian and myth-buster, Rolex supplied the (not yet named) California dials (made by Stern Frères of Patek Philippe fame) to Panerai in 1944. However, this is in direct contradiction to Panerai’s claim that their 1936 prototypes had the Roman/Arabic/geometric style dials. 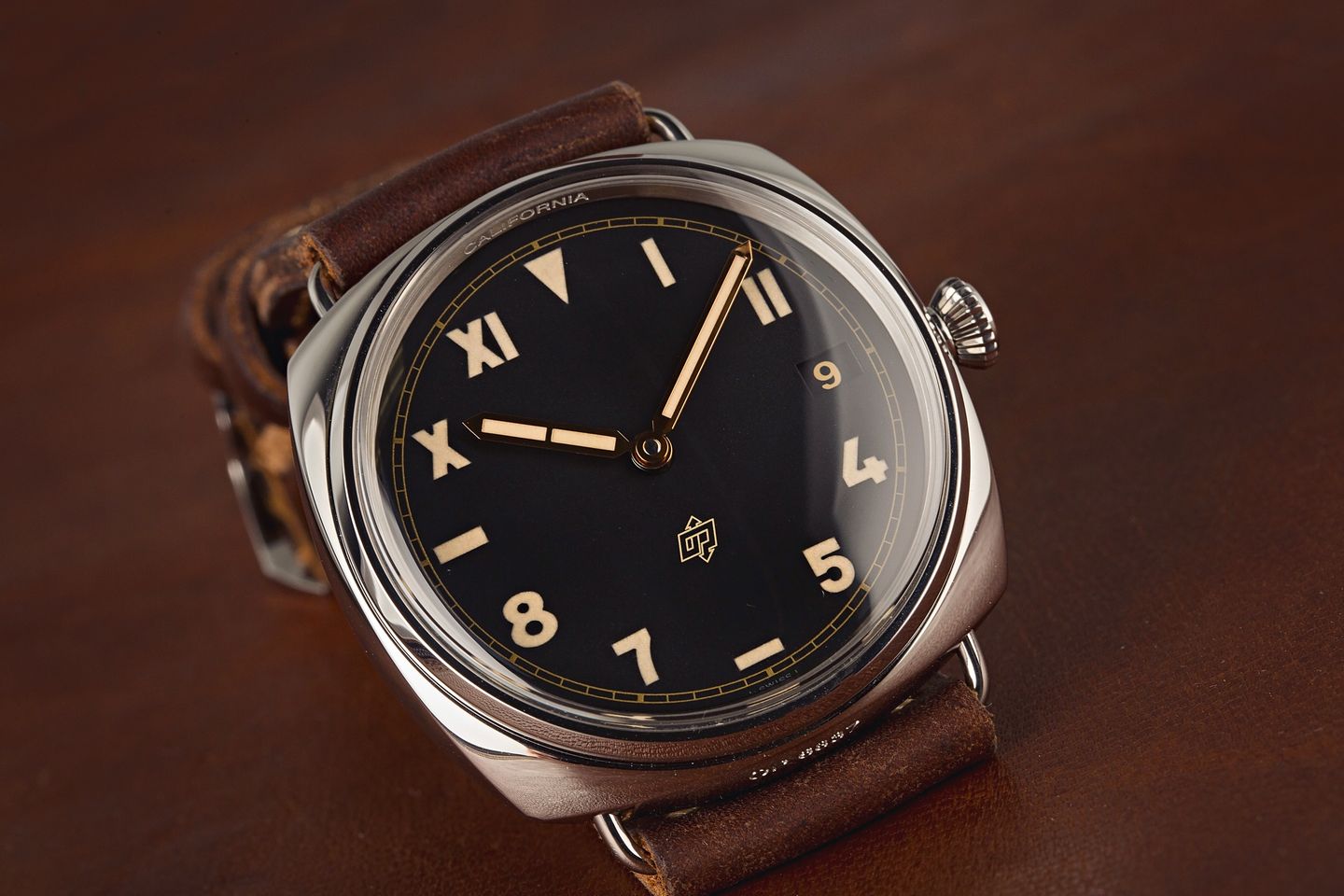 California Dials are most frequently found on Panerai’s vintage-inspired watches, like this Radiomir.

Though Rolex invented and patented the intriguing combination of Roman, Arabic, and geometric hour markers on a watch dial, I would venture to say that it is Panerai that is most associated with the California dial today. Rolex does not currently have a California dial in their current collection – you’ll have to look to vintage Rolex watches for that – while Panerai offers several to choose from. But, it is interesting to note that the luminous inverted triangle at 12 o’clock and baton indices at 6 and 9 o’clock are now standard in many Rolex sports watches like the Submariner, GMT-Master II, and Explorer II. 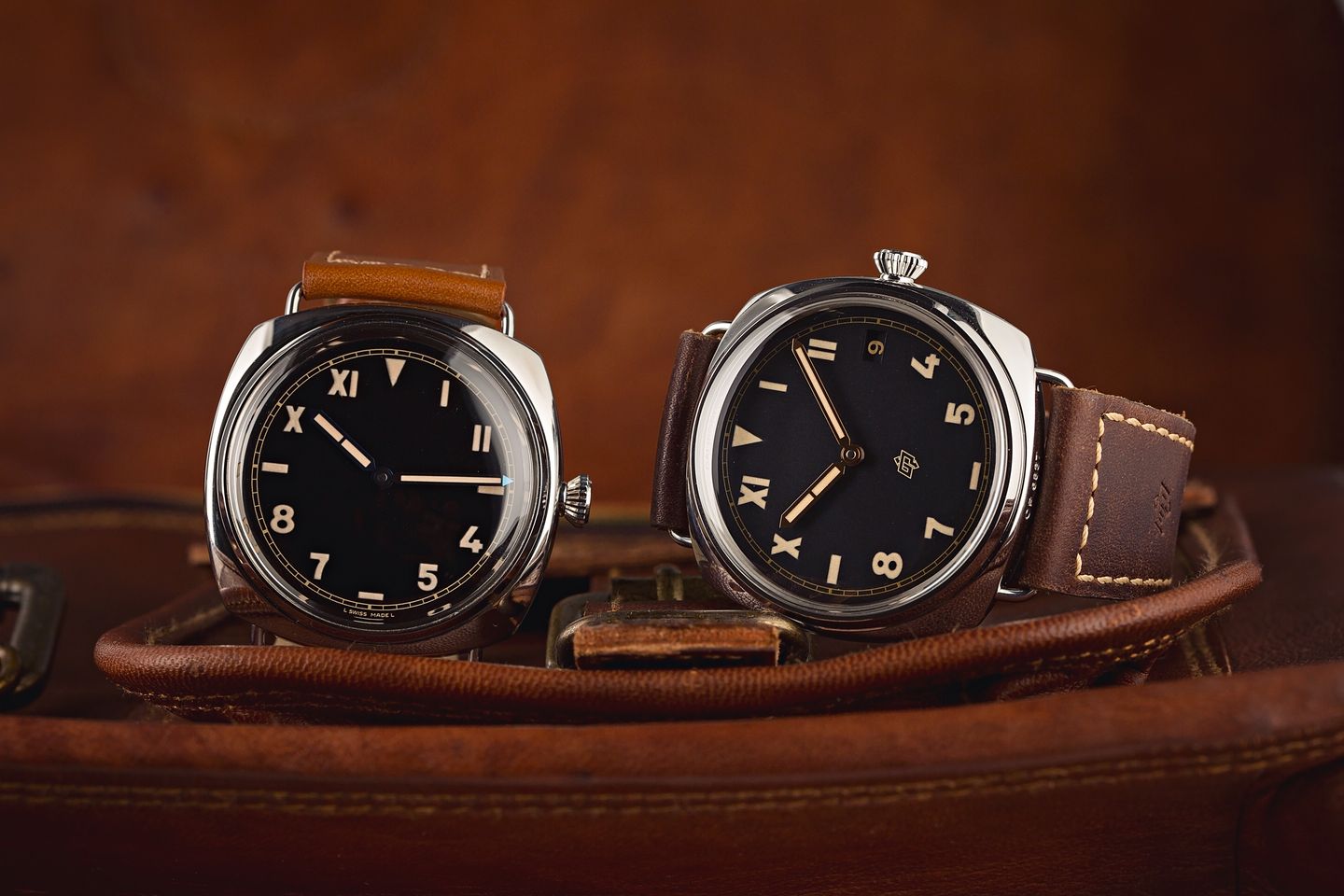 What do you think about California Dials? Tell us in the comments below.