Panerai has a very distinctive aesthetic centering around a robust yet minimalist design language, and the brand’s catalog includes countless movements, some of which are produced in-house and others that are outsourced. Additionally, Panerai watches are offered in a broad selection of metal and bracelet options. Consequently, it can be challenging to navigate the company’s extensive collection – even for the most experienced collector. If you are interested in adding one of these watches to your collection, then read on as our Panerai buying guide will help take the confusion out of shopping for your next watch.

– Founded in 1860 by Giovanni Panerai

– Produced watches for the Italian navy.

– Started selling watches to the public in 1993.

Click here to learn more about the names of Panerai watches. 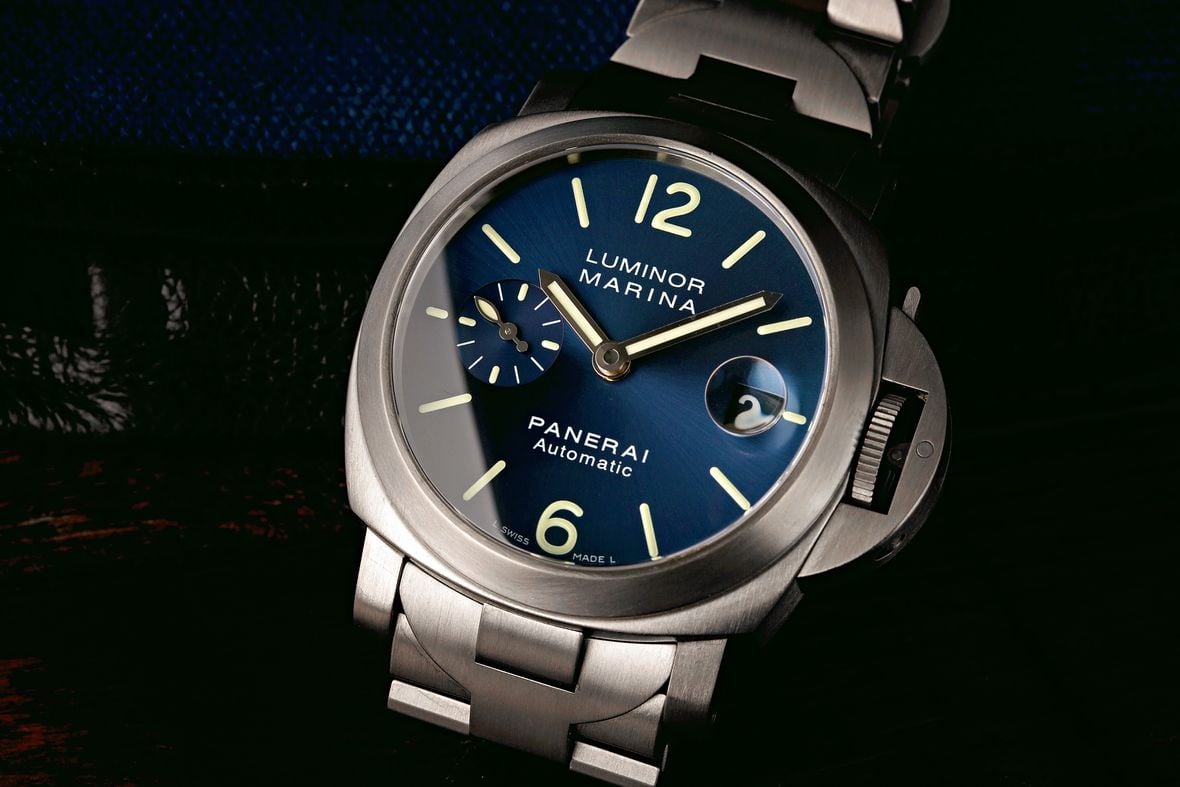 Although Panerai is currently a Swiss-made luxury brand, its history began in Italy in 1860 when founder Giovani Panerai opened his first watchmaker’s shop. Panerai initially only produces watches for various military branches, and it was not until 1993 that the brand started to sell watches to the public. Panerai’s timepieces focused primarily on offering a legible reading and a resilient case that could withstand vigorous wear in the water, and both of these traits have become hallmarks of the brand that are still present in modern Panerai watches today.

It was during the 1990s when a Panerai watch caught the eye of Hollywood actor Sylvester Stallone, who was in Italy that year filming the movie Daylight. According to legend, Stallone bought a Panerai watch and wore it in the film, bringing international visibility to the brand. Panerai’s debut on the silver screen ultimately caught the Richmond Group’s attention (formerly the Vendome Group), who bought Panerai in 1997 for a cool $1 million. The new ownership had high aspirations for Panerai, officially re-launching the brand as a luxury label in 2001. 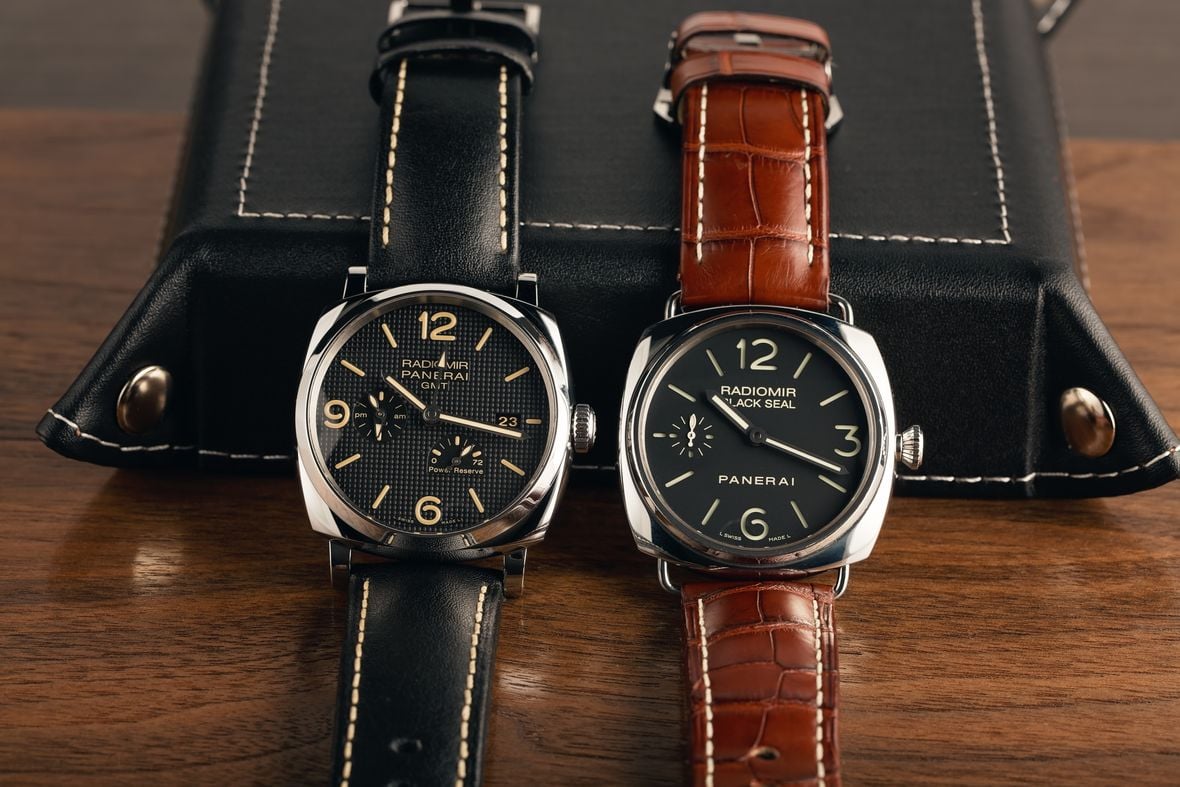 At the present time, Panerai’s catalog consists of 4 main collections: the Radiomir, Luminor, Luminor Due, and Submersible. While the brand is continuously evolving and offering new technologies, the core design of its original Italian dive watch remains. The similarities between each of these collections and the numerous models and variations that make up each one can sometimes make it difficult to distinguish between them, so let’s look at what makes each Panerai collection unique. 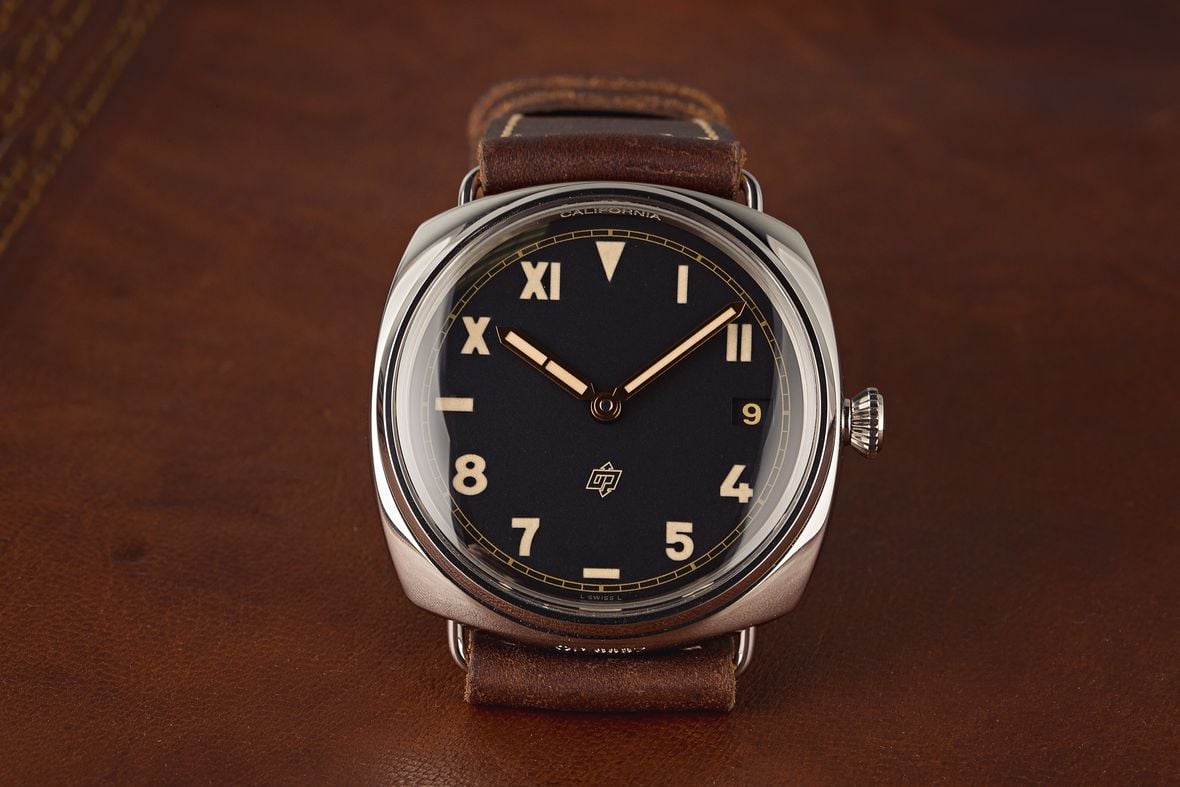 The easiest way to recognize the Radiomir is by its lack of crown guards. Without Panerai’s signature oversized crown-protecting bridge, the Radiomir takes on a somewhat more refined design that is more on par with what some might consider a dress watch, despite the model’s fierce roots as a military dive watch.

A few editions of the Panerai Radiomir are available, but all fall into either the classic Radiomir or the Radiomir 1940 range, with the prior featuring a flared crown and wire lugs, while the later is characterized by much thicker lugs and a cylindrical winding crown. The Panerai Radiomir gets its name from the radium-based luminous material that was used on the original dive watches from the 1930s, and the overall case silhouette follows the same general design. 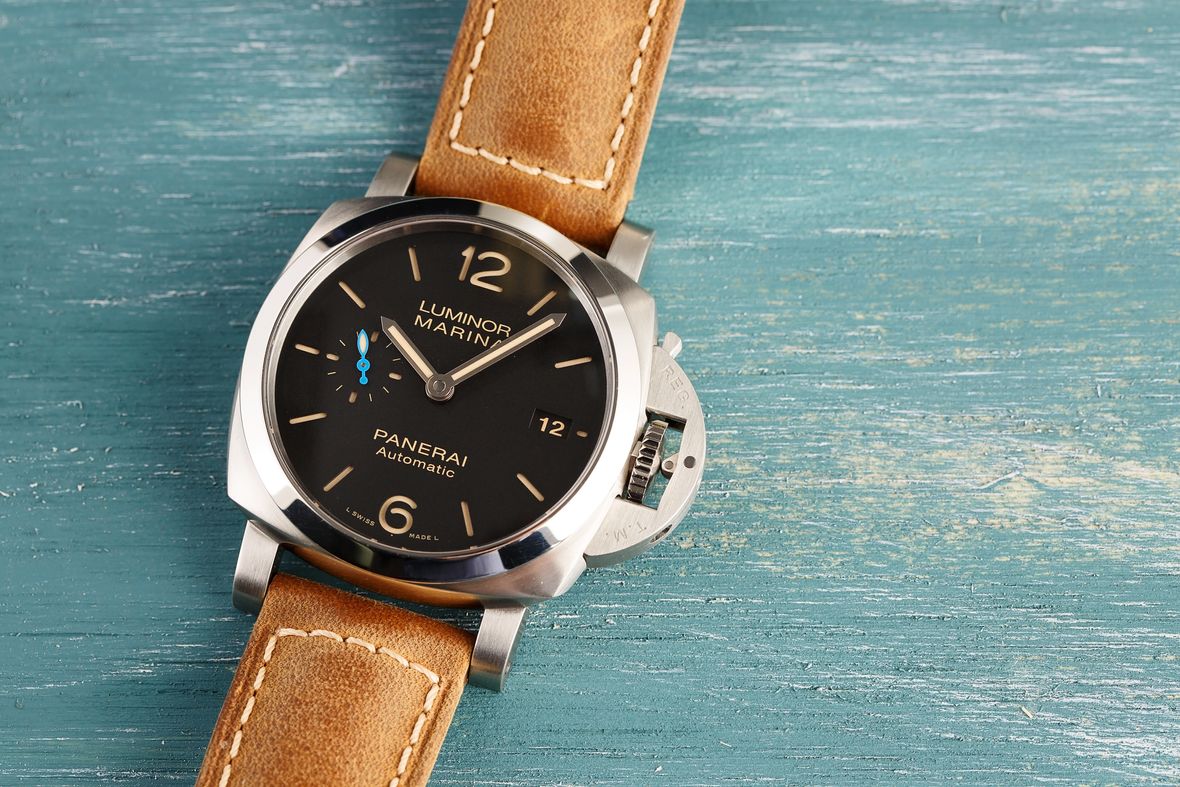 The Panerai Luminor earns its name from the Tritium-based lume that replaced the radium-based Radiomir. With that in mind, all modern Panerai watches now use a photoluminescent material rather than a radioactive one to provide their dials and hands with their glow.

Unlike the Radiomir collection, the Luminor features an oversized crown guard bridge. Similar to the Radiomir, it features Panerai’s famed cushion-shaped case, but the addition of the prominent crown guard gives this model an instantly recognizable and distinctive design. While the design for the Luminor appeared after the Radiomir, most people associate the unique aesthetic of the Luminor as being the quintessential design of a Panerai watch. 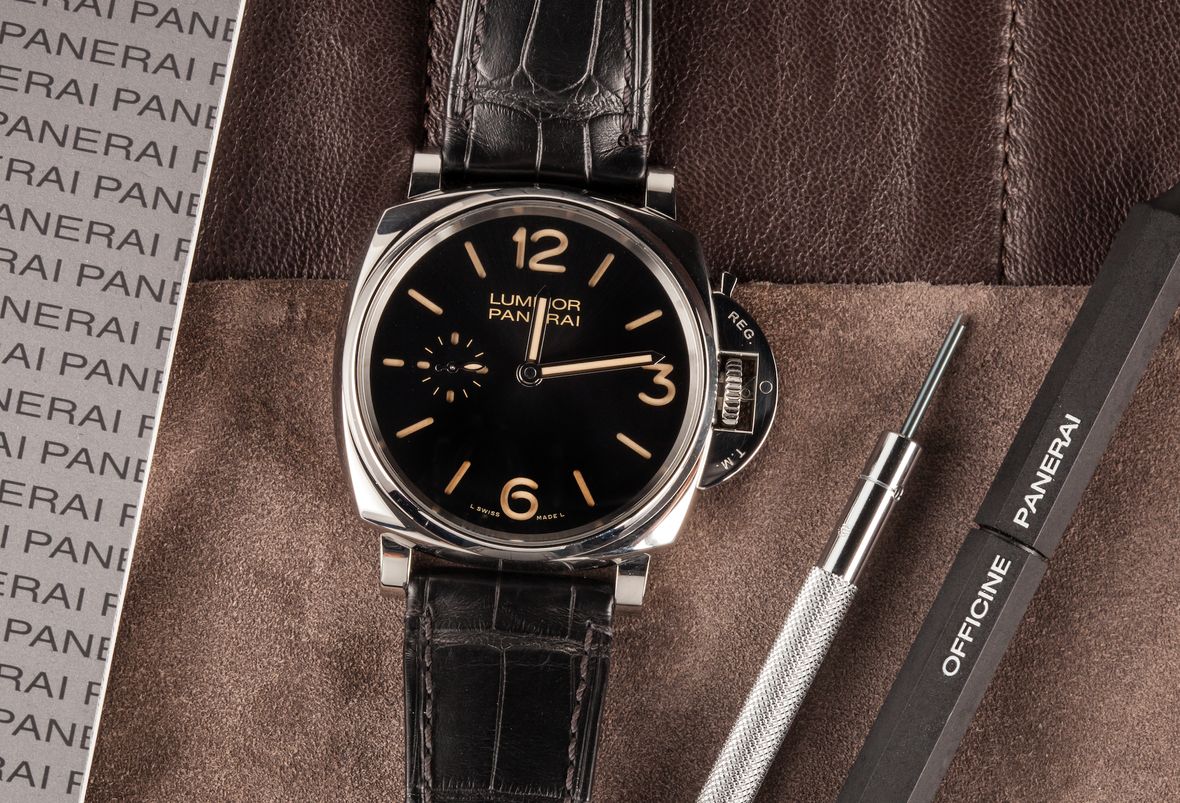 As a whole, the Panerai Luminor Due range follows very much the same aesthetic as the standard Luminor but offers thinner and smaller cases to provide users with a more refined overall look and feel. Following the same cushion-cased design and fitted with the brand’s signature crown protecting bridge, the Luminor Due is instantly recognizable as a Panerai watch.

First released in 2016, the Luminor Due line sacrifices some of the water-resistance of its siblings but gains a more refined and thinner case in the process. Measuring a highly versatile 38mm in diameter, the Luminor Due is about as close to a dress watch as you are likely to find from Panerai, and the brand even offers a number of additional softer dial colors to suit a wide range of collectors. 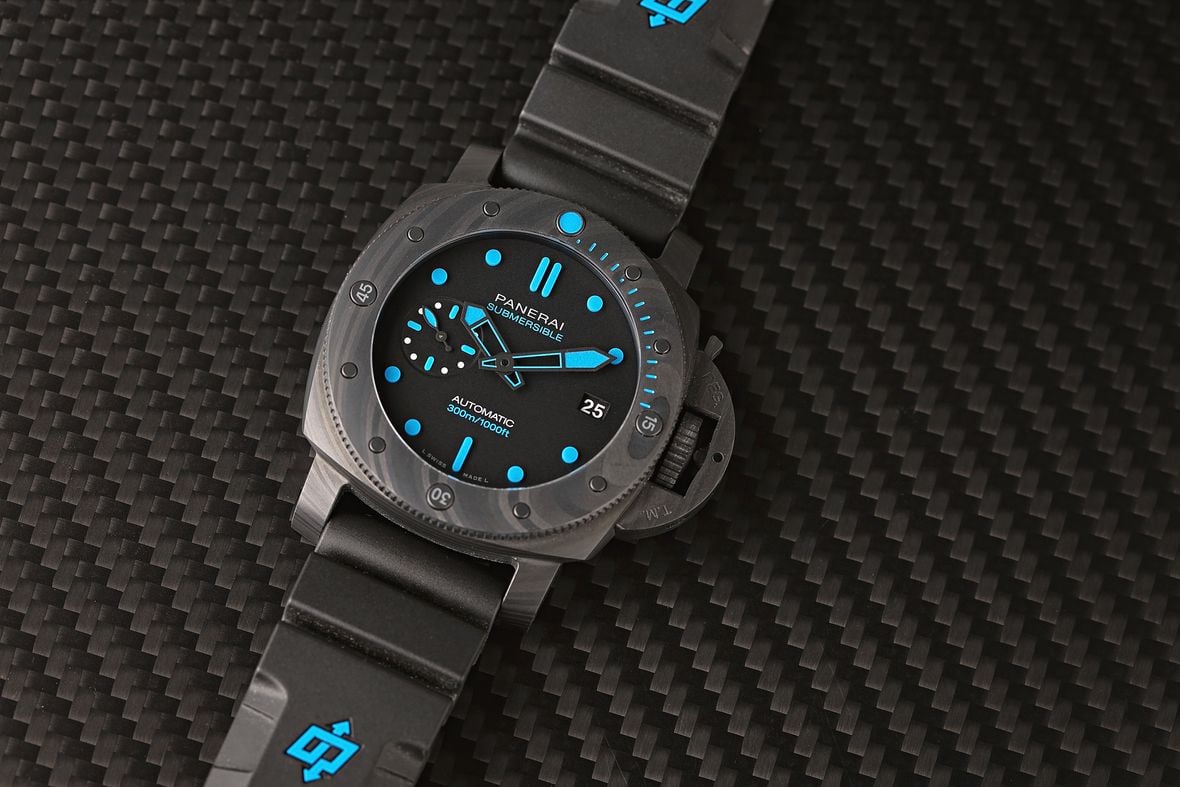 Originally part of the Luminor collection, the Panerai Submersible is the brand’s purpose-built dive watch. As you would expect from a model that previously belonged to the Luminor range, the watch features the brand’s signature cushion-shaped case and crown protecting bridge but it also includes a rotating timing bezel, just like you would expect on a proper professional dive watch.

The “Submersible” officially became its own standalone collection in 2019, but since it was previously part of the Luminor line, you will find many examples that say “Luminor Submersible” on their dials. While Panerai has deep roots as a dive watch brand, the Submersible is the only model that is technically a dive watch (by today’s standards), and all models from this range feature ample water-resistance ratings and 60-minute rotating timing bezels. 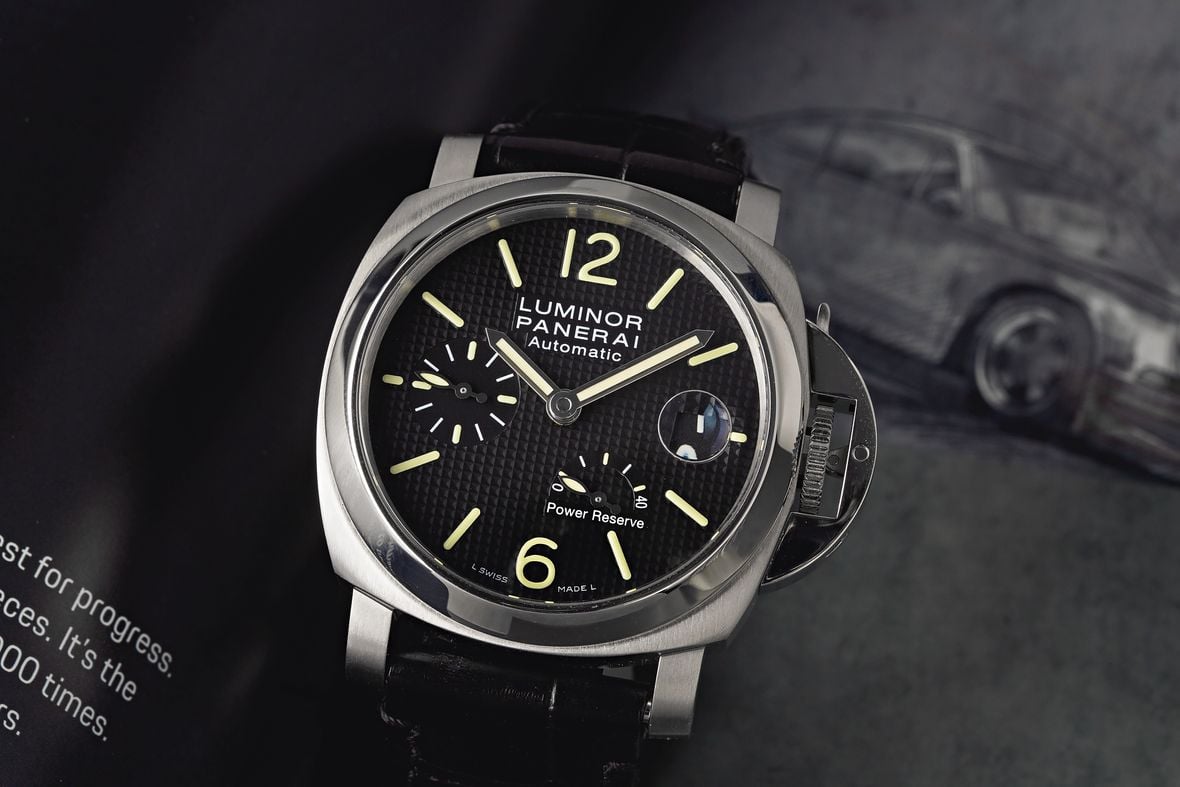 Navigating the Panerai catalog can be overwhelming for collectors and for some, beginning with the movement and going from there might be the best option. For example, do you prefer an automatic movement with a GMT function? The Caliber P.4001 and P.9012 are just a few of the handful of movements available to you. Another typical example is the classic hand-wound movement and two-hand dial. In that case, the Caliber P.6000 will do fine.

On the other hand, a watch’s appearance might speak to a collector more than the movement. While the core Panerai design ethos is the same throughout every model, there are numerous differences between the variations, such as the shape of the lugs or crown, the style of dial, and the materials used in its construction, such as stainless steel, bronze, titanium, platinum, and Carbotech (just to name a few). 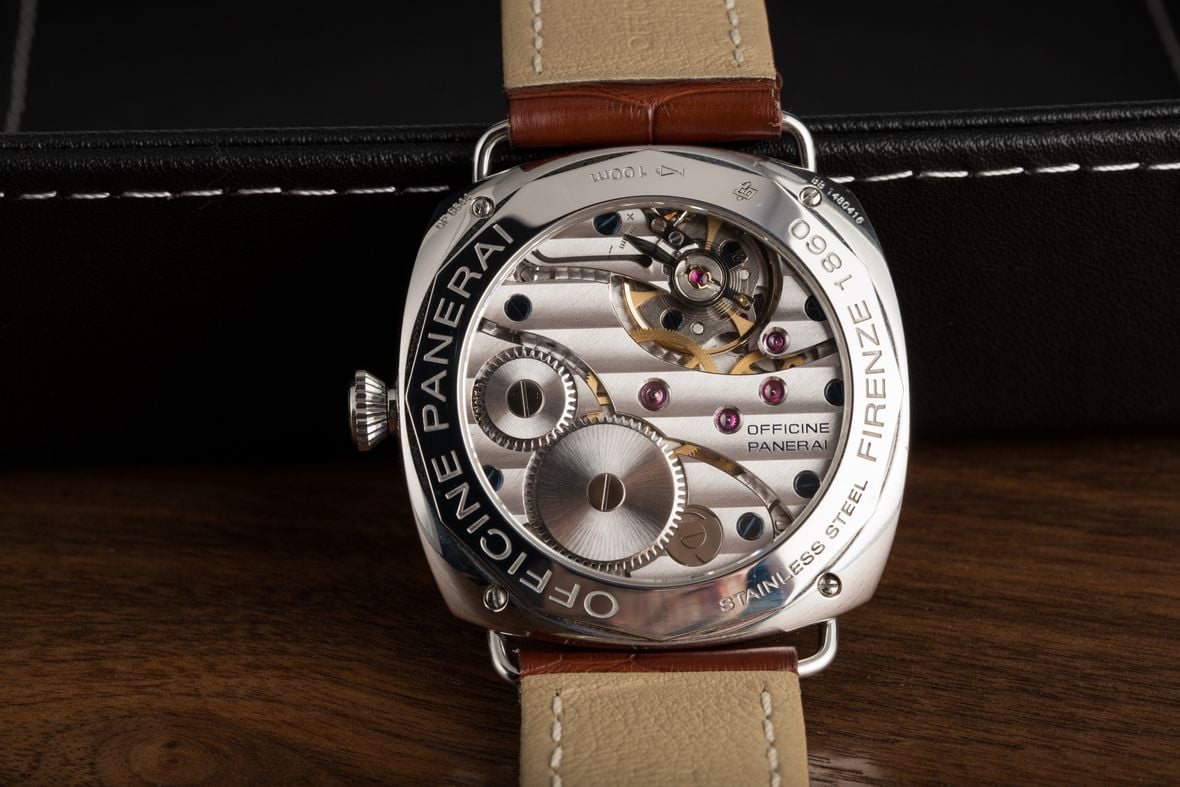 How Much is a Panerai Watch?

Many Panerai watches offer additional complications, such as a chronograph, GMT function, or power reserve indicator. Depending on the movement, materials, and specific feature set, the price for a Panerai watch can vary significantly.

At a retail level, prices for brand-new Panerai watches start out at around $5k and increase from there with the use of more complex movements and premium materials. Generally speaking, you can typically find a discount by shopping on the pre-owned market, but there are also certain Panerai models that are highly collectible and sell for far above their original retail prices on the pre-owned market.

Additionally, it’s also worth noting that excluding precious metal models and versions with additional complications, Panerai Submersible watches are typically more expensive than their standard Luminor or Radiomir siblings. Part of this is due to their more complex bezel assembly, but the higher price of Submersible watches is largely due to the fact that they have additional technologies that are responsible for their higher depth ratings. 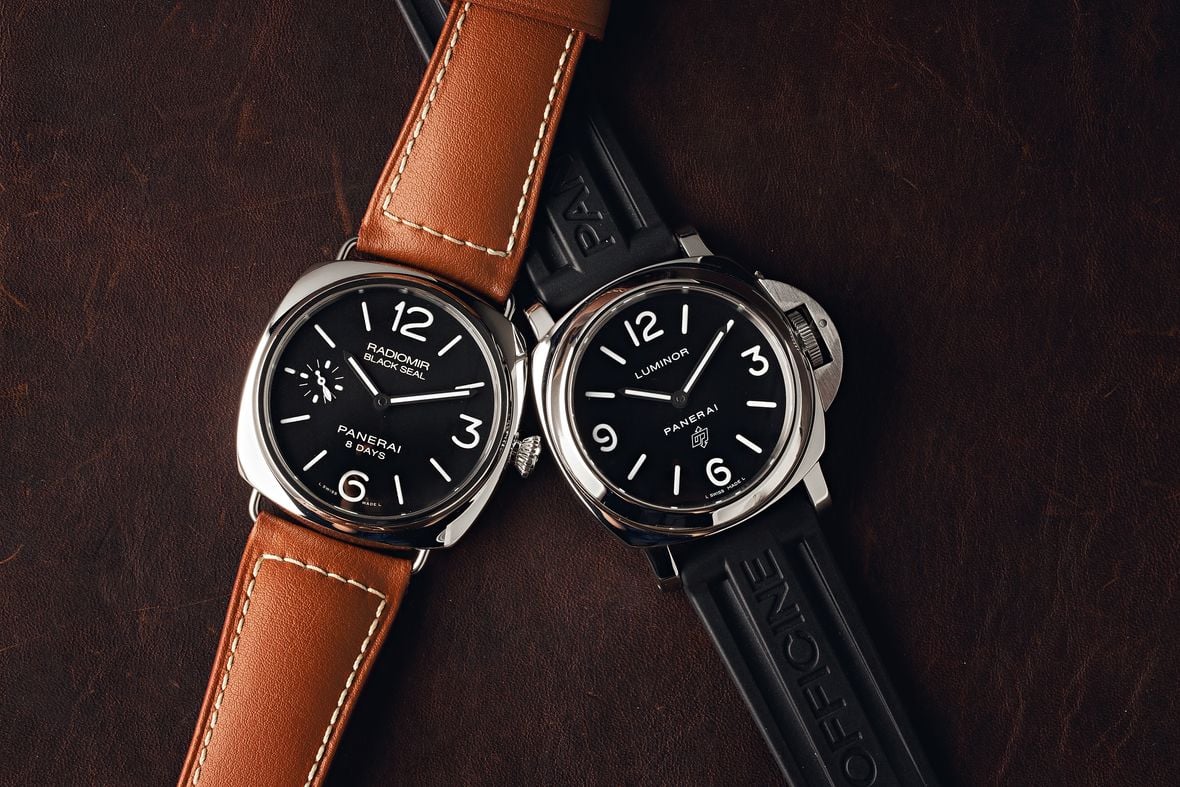 Some of Our Favorite Panerai Watches

Regardless of the specific model, all Panerai watches are crafted to the same exacting standards that are consistent with one of the world’s most famous luxury watch manufacturers. While any Panerai watch will make an excellent and worthwhile addition to any serious collection, below is a closer look at some of our favorite Panerai models. 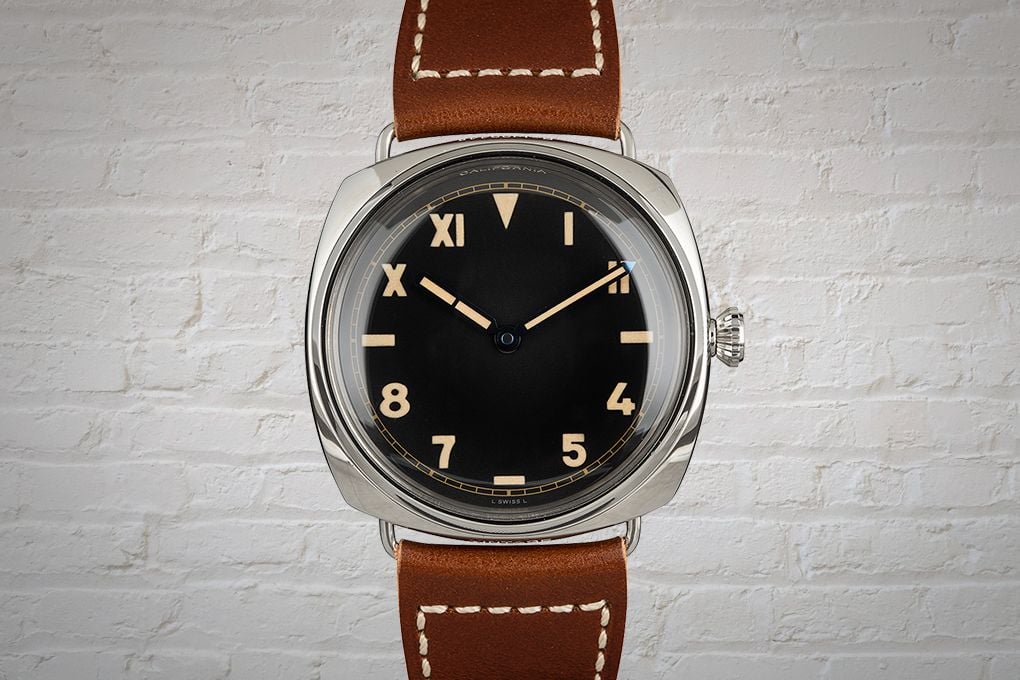 The PAM00448 is a limited edition Radiomir released in a quantity of just 750 pieces. Its retro design is directly inspired by the Panerai watches from the 1930s that were developed for the Italian Navy, complete with a Plexiglas crystal over the dial in place of sapphire. In addition to featuring a flared crown, wire lugs, and a cushion-shaped case, the PAM00448 also includes the coveted California dial distinguished by Roman numerals on the top half of the dial and Arabic numerals on the bottom. 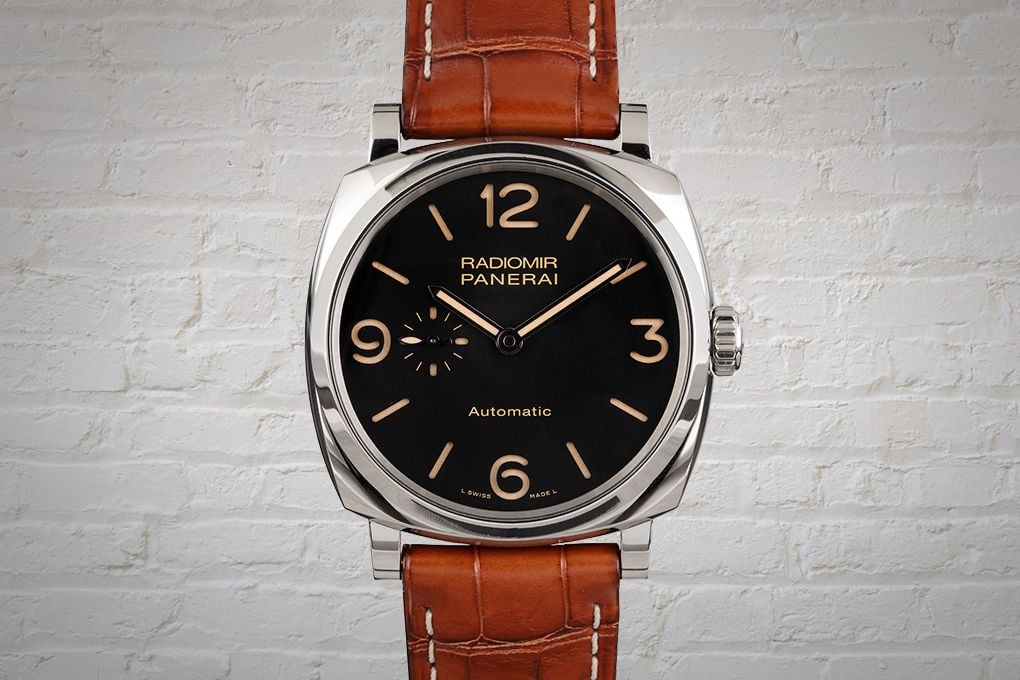 For a self-winding Panerai, the PAM572 is surprisingly sleek at just over 12mm thick. It also features the Radiomir’s signature cushion-shaped case without crown-guards. Avid collectors will also appreciate the sandwich dial, which layers a black stencil dial over a fully-luminous disc with the bottom layer glowing through the cutouts in the upper dial’s surface. In addition to showcasing impressive watchmaking prowess, the sandwich dial also creates a bright, luminous display with greater depth than a standard printed dial. Running seconds are presented next to the 9-hour marker, leaving only the hour and minute hands central on the dial – elegant simplicity at its finest. 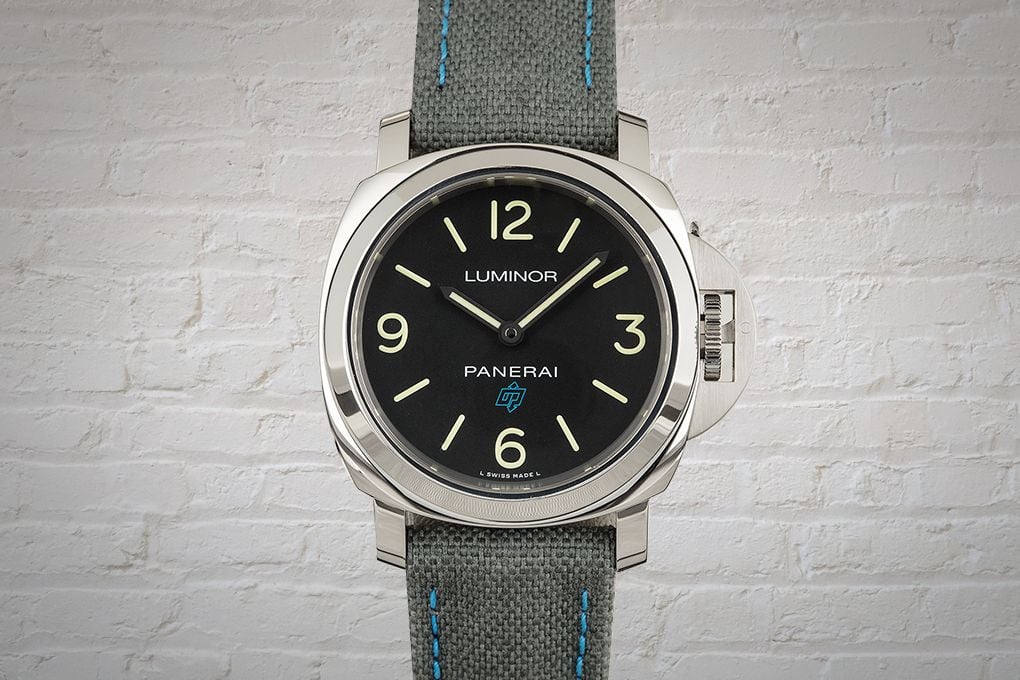 One of the most affordable Luminor offerings is the Base Logo model with a time-only dial. The essential design elements of the iconic Luminor are all there, with a cushion-shaped case, lever-activated crown guard, and bright luminous display. The model is available with either a black or white dial, a 44mm stainless steel case, a leather (PAM00773) or textile (PAM00774) strap, and a sapphire crystal. Black dial variations feature the classic dial configuration with Arabic numerals and batons, while the white dial references display the time with Arabic numerals and small dots. Powering this series is the Caliber P.6000, a manual-winding movement with a 3-day power reserve. The Cal. P.6000 marks Panerai’s transition from the ETA to in-house movements for its entry-level range. 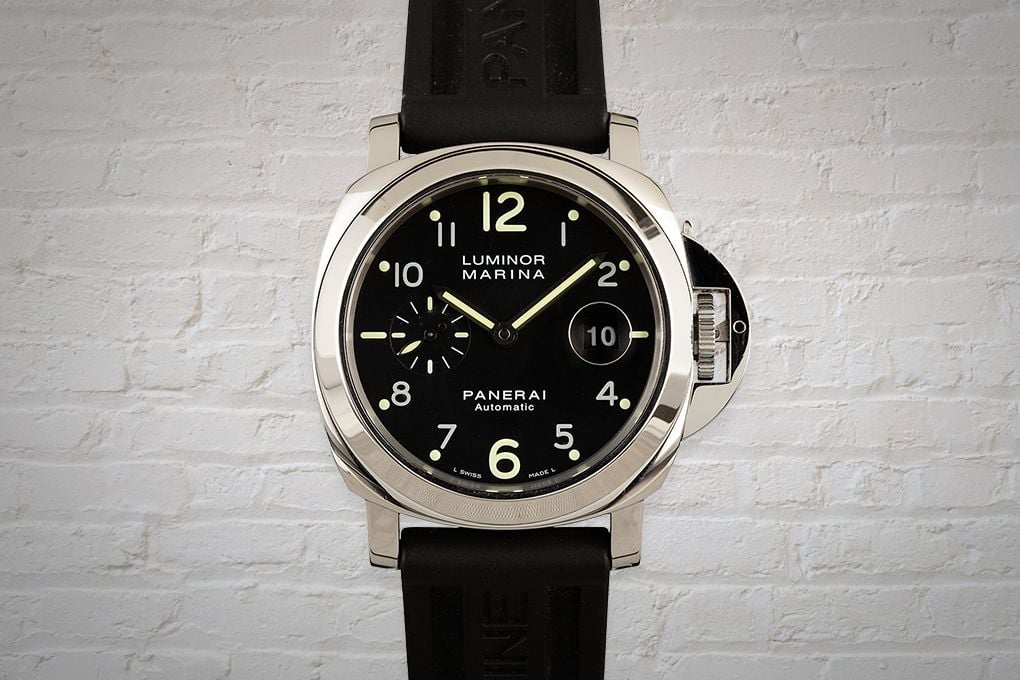 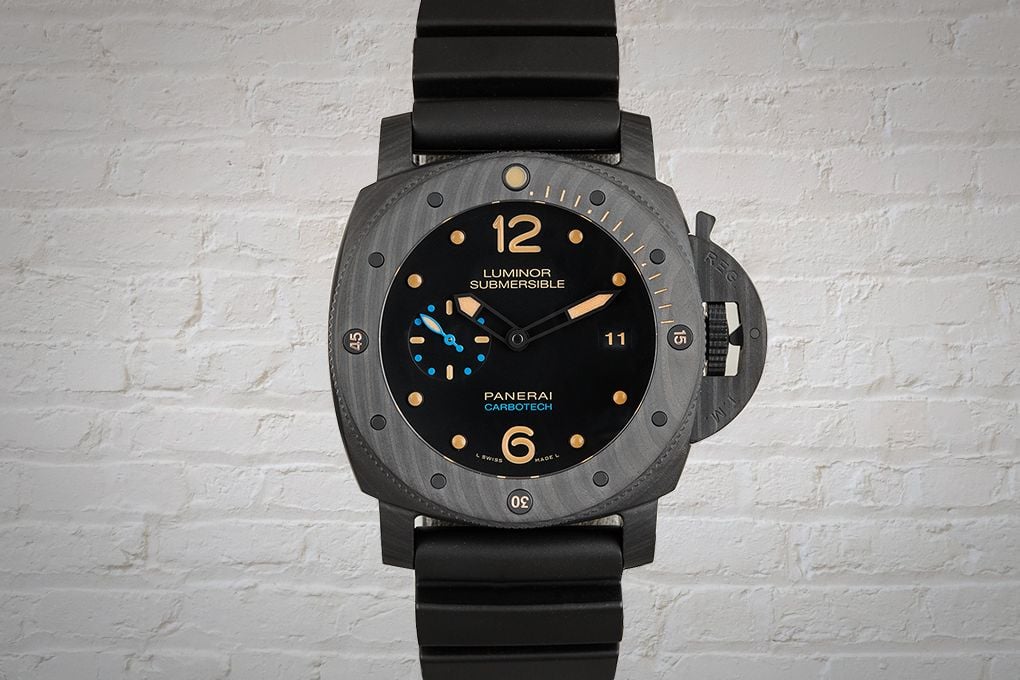 Carbotech is Panerai’s signature carbon fiber material that is praised for its unique appearance. Due to the nature of the material, no two Carbotech Submersible watches will have the same finish. It also features a striking matte black appearance, which many contemporary collectors find particularly irresistible. The Panerai Submersible is a true diver, with water-resistance up to 300 meters (1,000 feet), a unidirectional 60-minute timing bezel, and a luminous display that is easy to read while exploring murky waters. At the heart of the PAM00616 beats the Panerai Caliber P.9000 – a self-winding movement with small seconds, a date mechanism, and a 3-day power reserve.