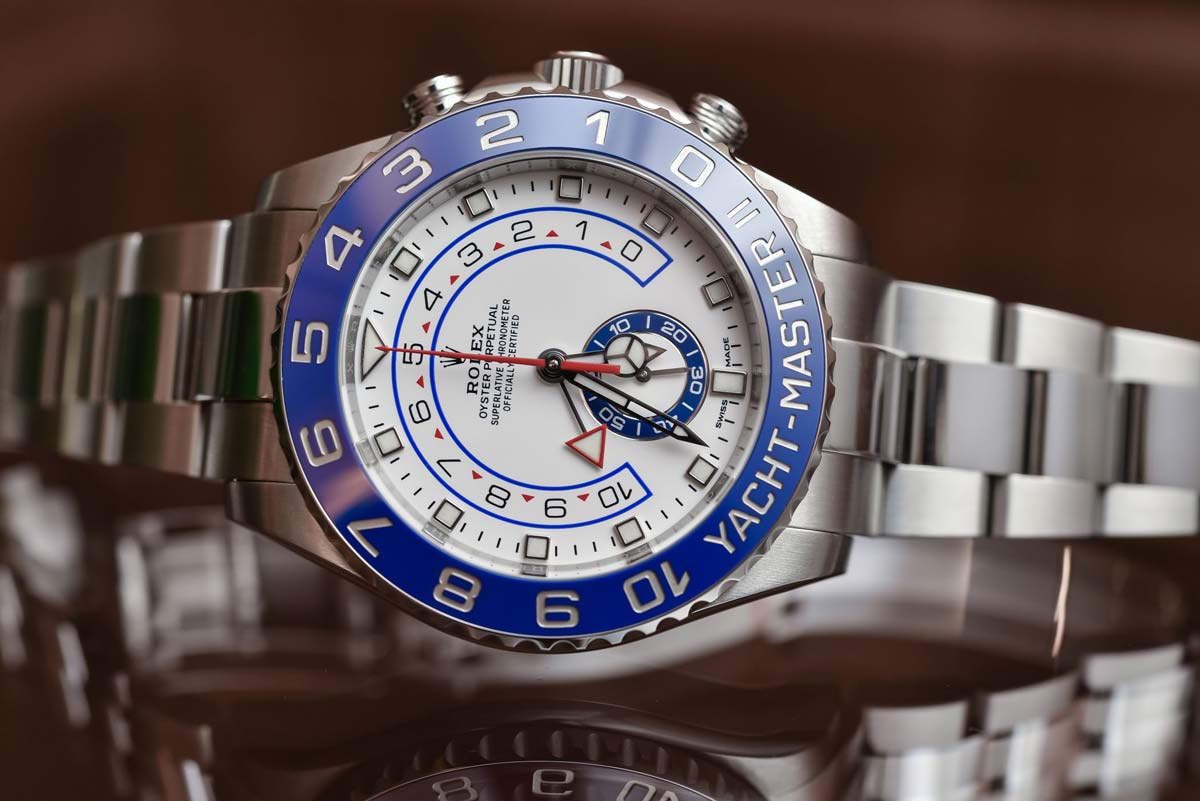 Rolex first unleashed the Cosmograph Daytona in 1963 as a chronograph dedicated to motorsports. However, as manually-wound models with 38mm cases, vintage Daytona watches are significantly different from the versions of today. It was only in 2000 that we saw the first iterations of today’s Daytona models; that is to say, 40mm watches that run on in-house automatic chronograph movements.

These editions of the Rolex Daytona carry six-digit reference numbers and are powered by the Caliber 4130. Prior to this generation, there were the five-digit Daytona models fitted with Rolex-modified, Zenith El Primero automatic movements, which were produced from 1988 until 2000. 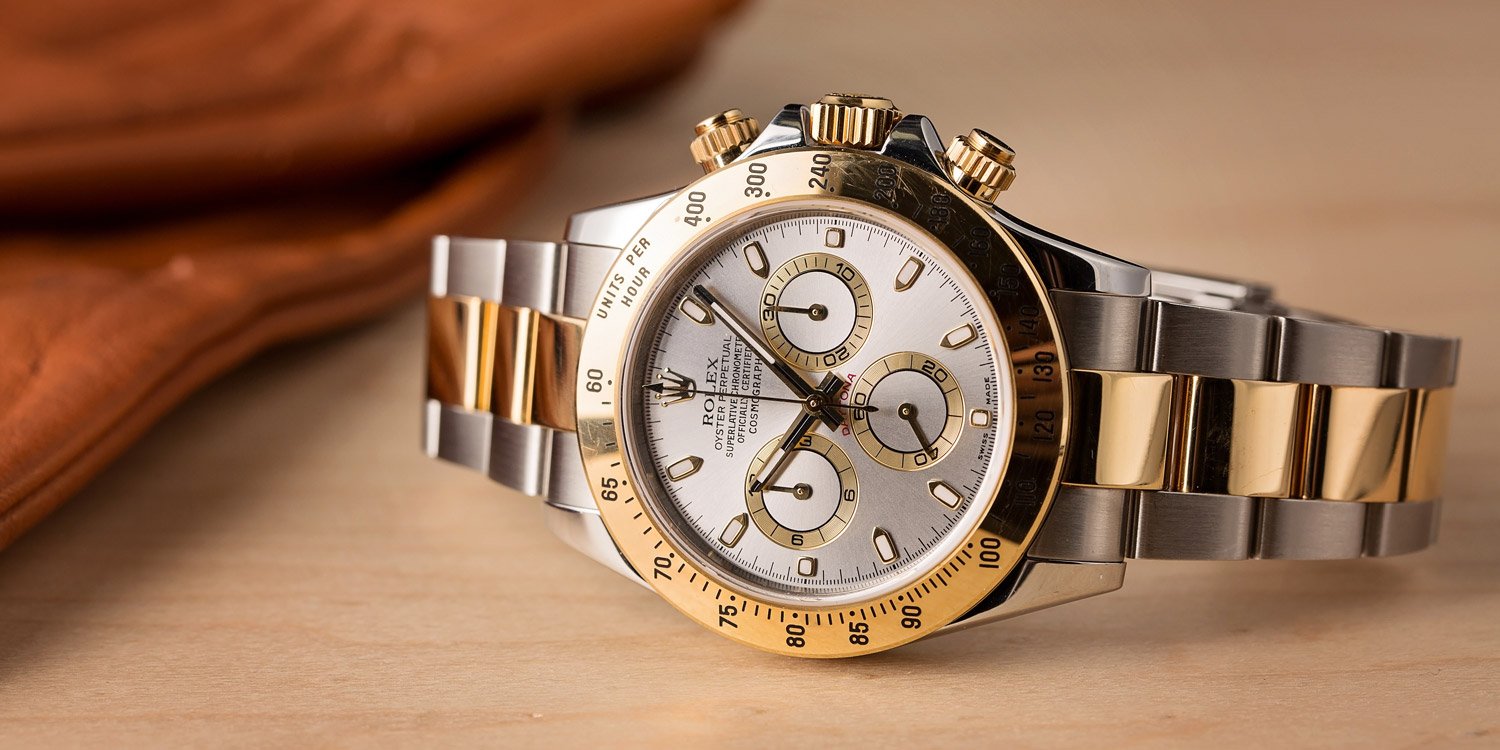 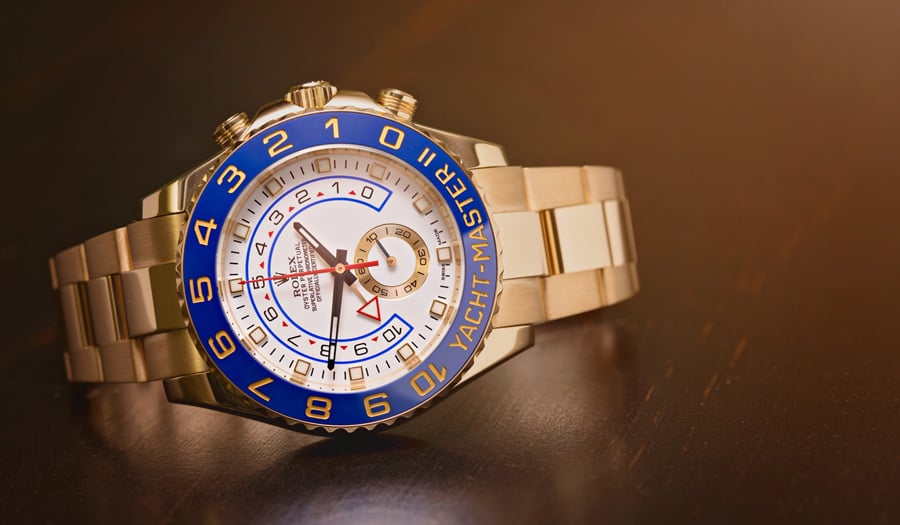 The Daytona’s 40mm case comes fitted with a pair of screw-down chronograph pushers flanking its screw-down winding crown. This is to keep any moisture out of the watch, ensuring its 100-meter water resistance. The fixed bezels of the Daytona watches – craft from either metal or Cerachrom (ceramic) – are engraved with a tachymeter scale (except for the gem-set bezel editions), while the dials house a trio of subsidiary registers.

In true Rolex fashion, there are plenty of different dial colors and index styles to choose from. Material options within the six-digit Daytona family include stainless steel, yellow gold, white gold, Everose gold, two-tone steel and yellow gold, and platinum. Most Daytona models come with metal Oyster bracelets however, there are some gold Daytona watches that are presented on black rubber Oysterflex bracelets as well. Rolex previously manufactured leather-strap versions but they are no longer in production. 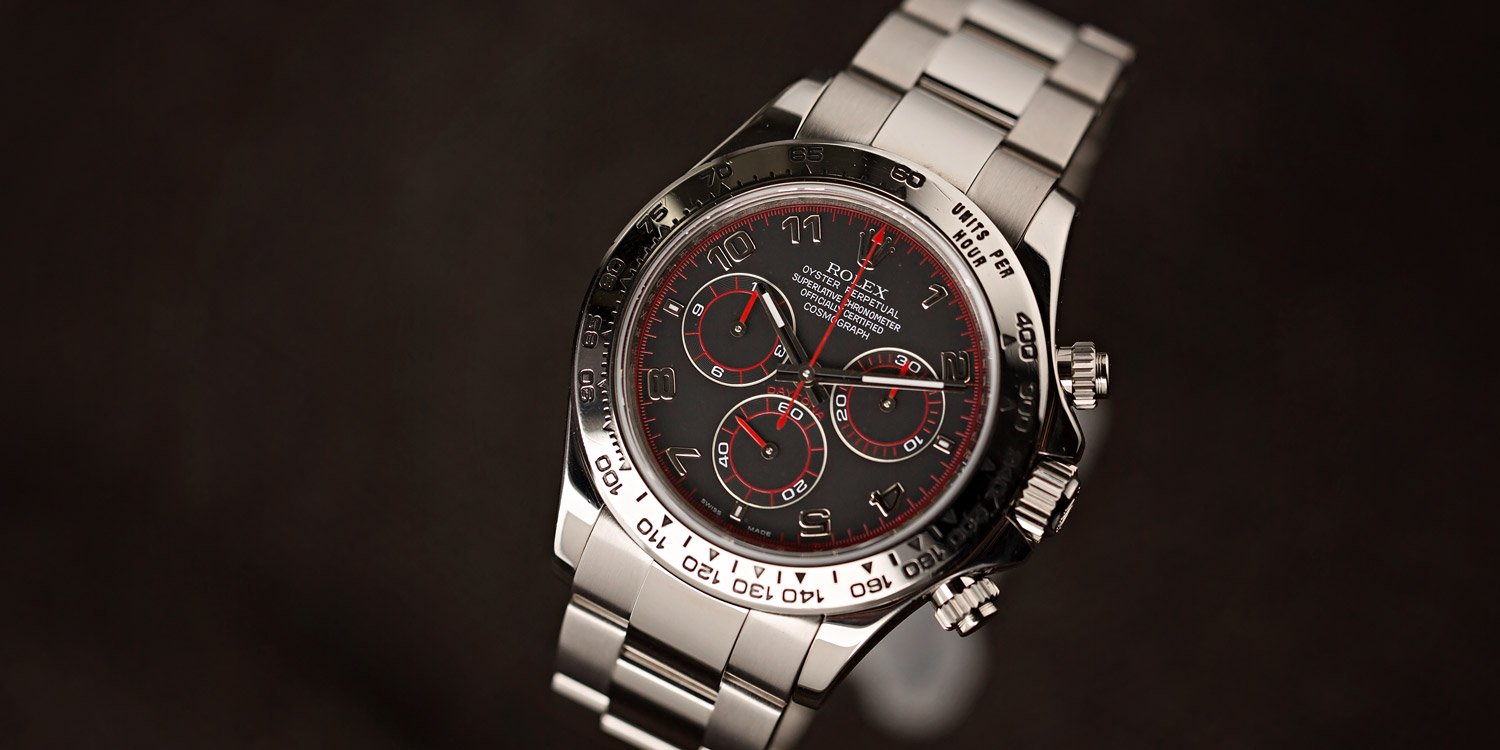 In direct contrast to the Daytona’s classic looks and restrained proportions, the Yacht-Master II is proudly big, bold, and badass. Its bezel – either in bright blue Cerachrom (ceramic) or platinum – sits on the 44mm case and is emblazoned with the “YACHT-MASTER II” name, along with numbers 1 – 10. The white dial with red and blue accents offers three distinct areas for three readings: the center hands, the 10-minute countdown display, and the running seconds sub-dial. 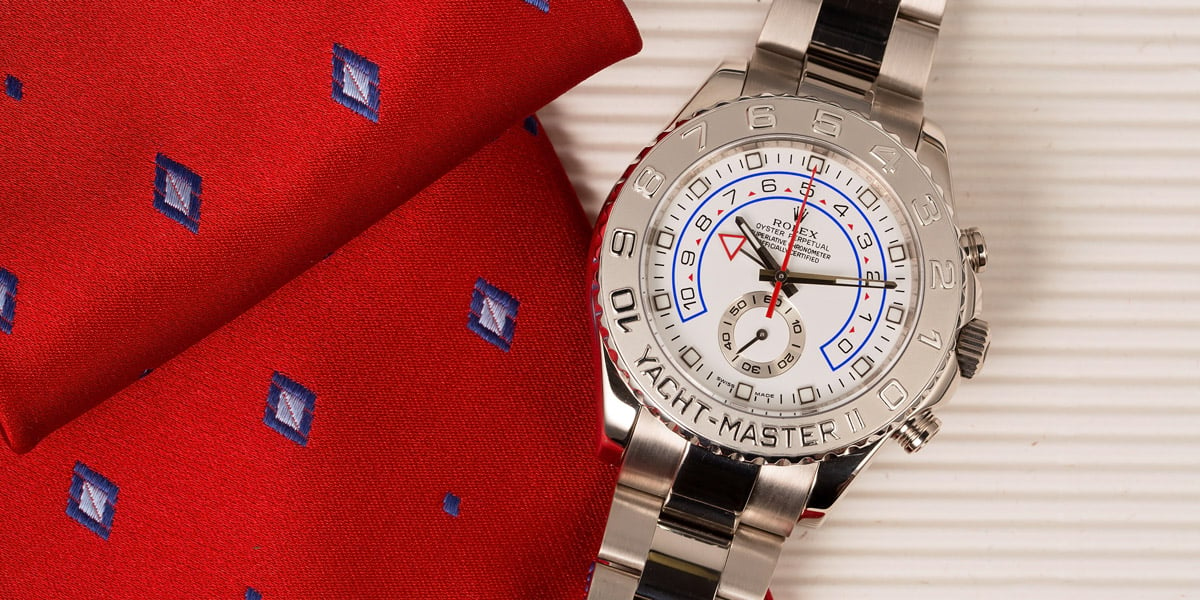 Manufactured entirely in-house, the Daytona’s Caliber 4130 has been heralded by many watch enthusiasts as one of the most reliable and robust automatic chronograph movements on the market. One of its defining features is the use of a vertical (rather than lateral) clutch to activate the chronograph. This not only permits the chronograph hand to run smoothly without any signs of “jittering,” but also allows the chronograph function to run for a long time with no influence on the Daytona’s precision. Thanks to Caliber 4130, the Daytona features a chronograph hand accurate to within 1/8 of a second, a 30-minute counter at 3, a 12-hour counter at 9, a small seconds register at 6, and a power reserve of 72 hours.

When Rolex launched the Yacht-Master II in 2007, inside the watch was the Caliber 4160, which was then upgraded to Caliber 4161 in 2013. While these in-house chronograph calibers are based on the Caliber 4130, they are much more complex in terms of functionality. Rolex maintains that the Caliber 4160/4161 was the result of over 35,000 hours of development. 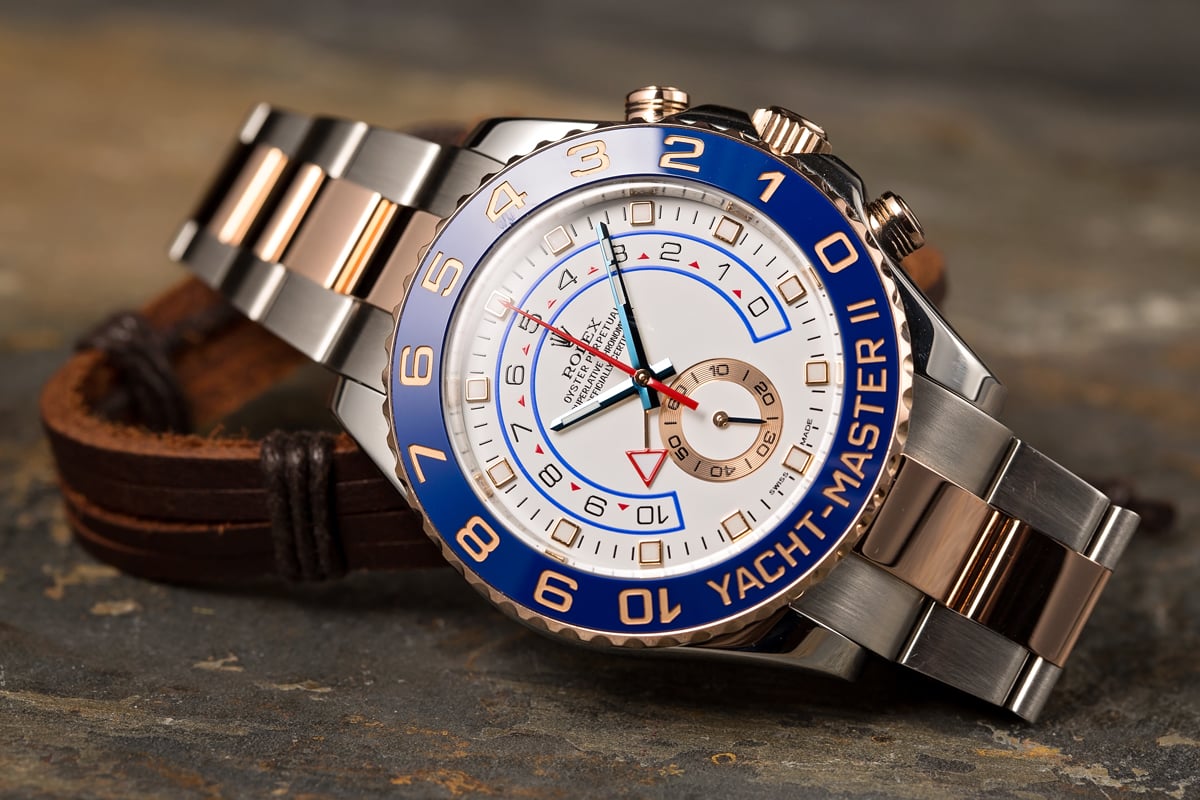 Most intriguing, the bezel on the Yacht-Master II is not just for show. Instead, turning it allows the user to flip through what functions of the watch to set. And one of these functions includes a programmable countdown timer (from 1 – 10 minutes), which also memorizes the desired setting t when you reset the timer. So, if you love a seven-minute jammy egg or a four-minute brew, then your Yacht-Master II is there for you.

The central chronograph hand also has flyback functionality, which means that you can reset it back to zero with the press of a single button while it is in motion. Additionally, just like its base caliber, the Cal. 4160/4161 also has a 72-hour power reserve.

Side-by-side, these two Rolex chronographs look nothing alike. The Daytona offers traditional chronograph styling and functionality, while the Yacht-Master II is more aggressively designed and offers a niche complication in the form of a regatta chronograph. So, which one would be your pick? 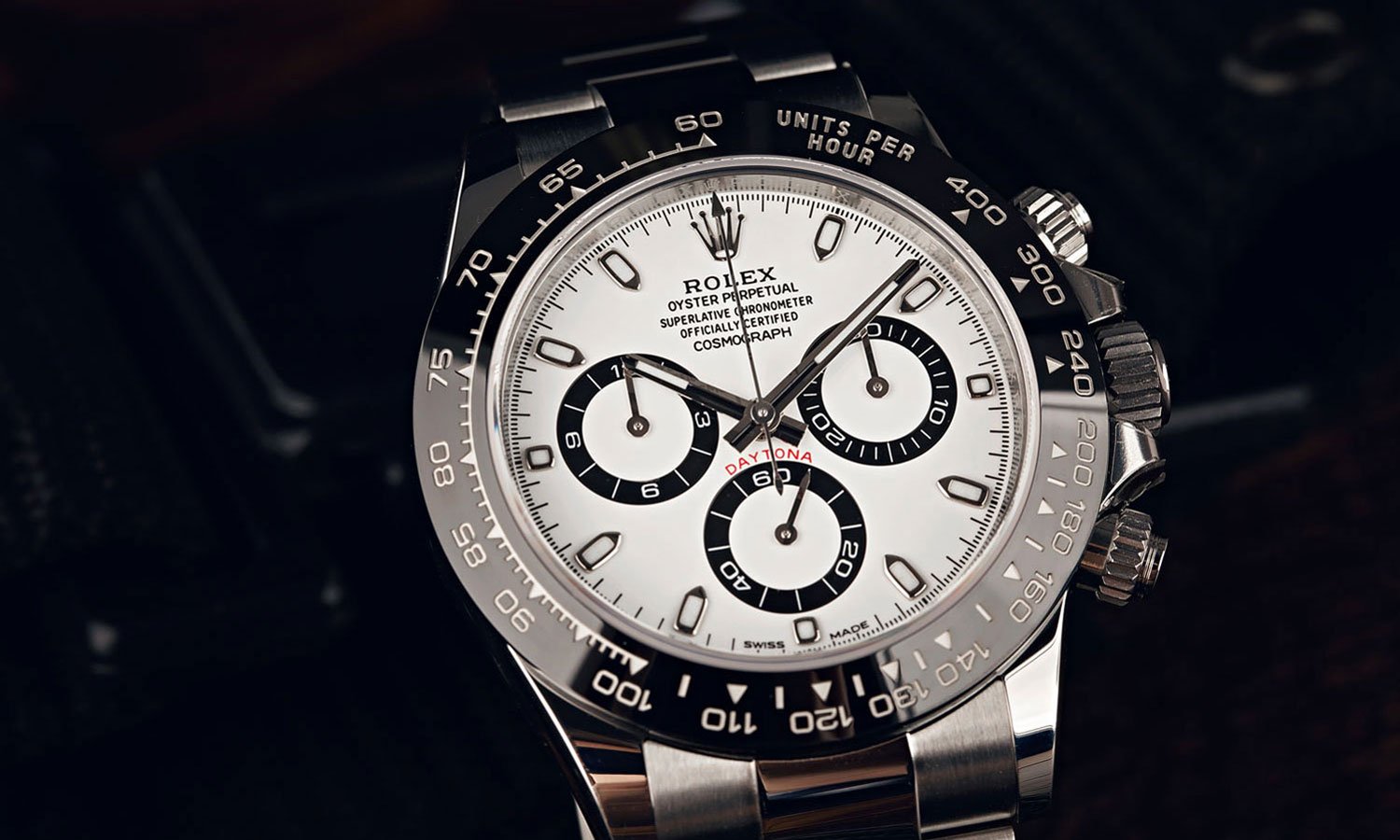