The Last of the Best? The Rolex Submariner Reference 14060

Launched in 1953 as one of the world’s very first dive watches, the Rolex Submariner is a true legend within the world of horology and easily one of the most famous watches ever created. It is often said that the Rolex Submariner is the blueprint of the modern dive watch, and the model has managed to remain in continuous production over the years, evolving from year to year as better materials and technologies become available. The evolution of the Submariner has been incremental, but the current-production model is a dramatically different watch than the version that first debuted in the 1950s. Some collectors prefer modern watches for the improved performance they offer, while others prefer vintage models due to the fact that they are closer to the original vision of the watch. However, sitting somewhere at the crossroads of vintage and modern in the Rolex Submariner reference 14060 and for many collectors, this model is known as “the last of the best.”

Although it was originally designed specifically for scuba divers, the Submariner has transcended its tool watch origins and it can now be spotted on the wrists of countless individuals all over the world, many of whom do not dive at all. Since electronic dive computers have entirely replaced mechanical watches in actual scuba diving applications, today’s owners of dive watches have more freedom to choose their timepieces based on a myriad of other factors outside how well they perform underwater. As a result of this, older Submariner models and certainly the various vintage references have all seen an enormous resurgence in popularity due to the fact that they offer unique traits that are grounded in Rolex’s rich history and that you simply will not find on any modern watches. However, the drawback here is that vintage watches can often be less durable than their modern counterparts, and so many collectors seek out a model that offers much of the same retro appeal without giving up contemporary conveniences. And among these models that toe the line between vintage and modern, the Rolex Submariner reference 14060 is easily one of the standout fan-favorites. 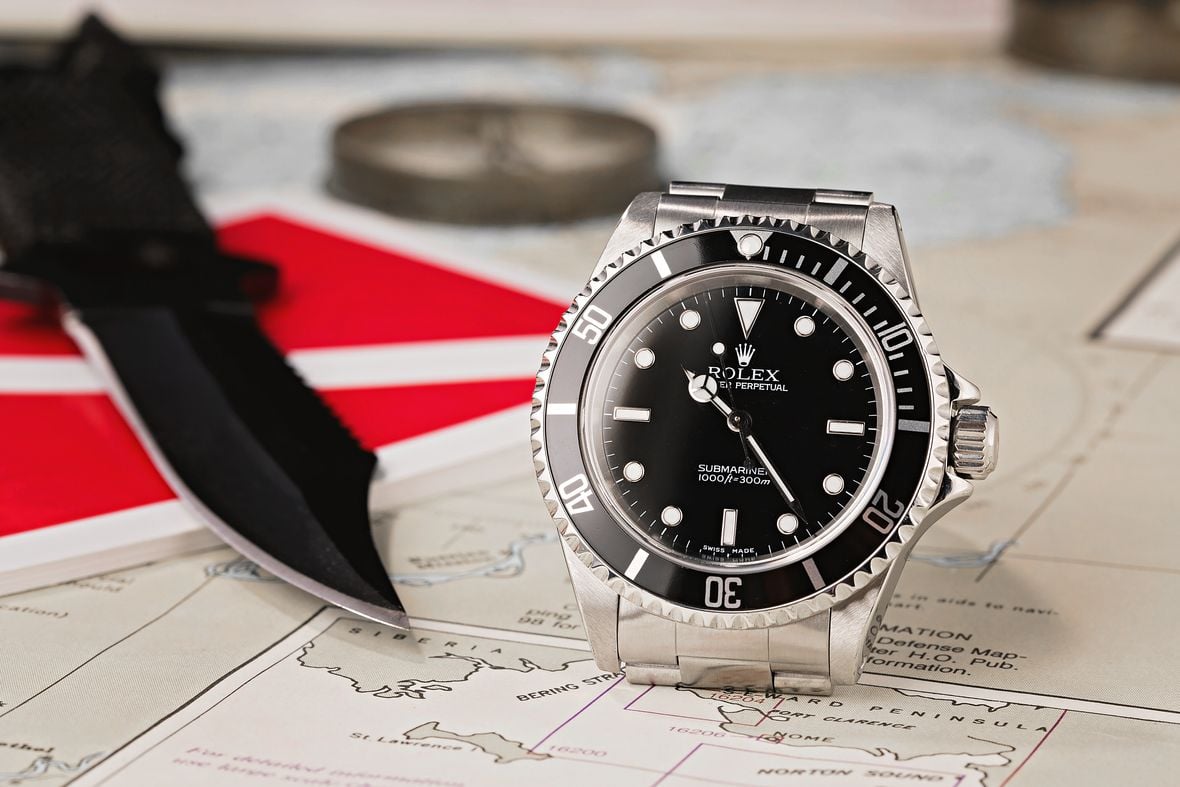 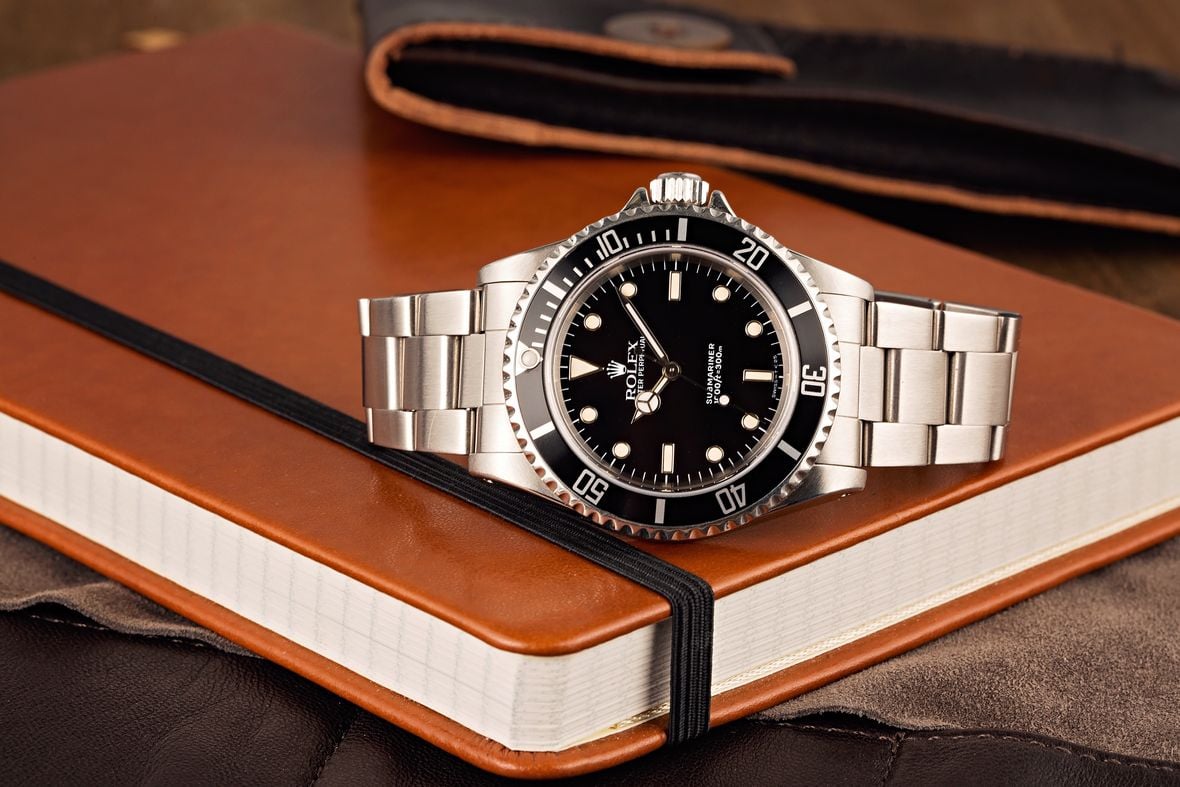 No one could argue that the contemporary Rolex Submariner is a beautifully impressive timepiece. Similarly, no one can deny that the vintage examples of the world’s favorite dive watch are the epitome of understated, purpose-built cool.

However, both modern and classic have their drawbacks. The larger 41mm case and Maxi dial of the current lineup are not to everyone’s taste, nor are the chunky Super Case models from the previous generation – the thicker lugs, crown guards, and enlarged indexes represent Rolex’s compromise for those desperate for the Submariner to grow beyond its time-honored 40mm dimensions.

The brand’s patented Cerachrom bezel, while virtually impervious to daily wear and tear, will never develop the unique patina many collectors look for in vintage models. Additionally, although Rolex slimmed down the lugs with the introduction of the current 41mm generation, the Submariner is still a decidedly modern watch and it is significantly larger than the older aluminum bezel references.

Conversely, the models from the first quarter-century or so of the Submariner’s existence are missing several features that make later references easier to live with day-to-day. Tough sapphire crystals, for example, did not replace the former plexiglass until the end of the 1970s. The rotating bezel didn’t become unidirectional until the beginning of the 1980s, and of course, the performance of modern calibers will almost always outdo those from yesteryear. Added to that is the fact a vintage anything is usually more fragile than its present-day counterpart. Therefore, perhaps the best all-around solution is a Rolex Submariner with many of the latest technologies and innovations but wrapped up in a body that is still steeped in golden age nostalgia. 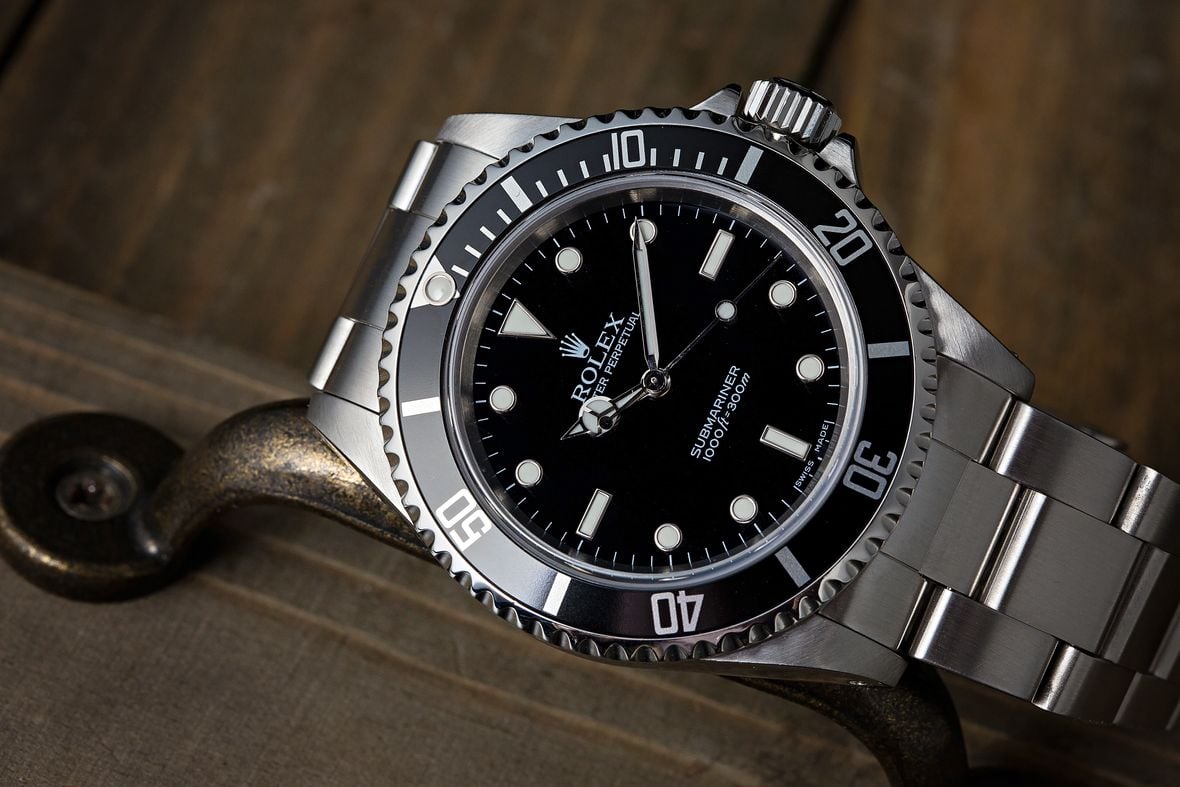 A Closer Look at the Rolex Submariner 14060

In 1990, Rolex finally got around to replacing the long-running Submariner reference 5513, a reference that started life in 1962 and one that spawned the MilSub, as well as acting as the testbed for the Helium Escape Valve, later to go on to find a permanent home on the Sea-Dweller. The model that superseded it was the Submariner ref. 14060, generally seen as the bridge between the then and now, and the last of the classic Rolex Submariner watches.

First, the traditional. Like every Submariner beloved by the purist, the ref. 14060 is a no-date model. The introduction of a date feature on the ref. 1680 from 1967 split fans down the middle, not so much for the complication itself but for the inclusion of Rolex’s Cyclops magnification lens over the three o’clock date window. It was argued, with some justification, that the new addition ruined the symmetry of the dial and detracted from its at-a-glance legibility.

Elsewhere, the bezel insert is aluminum, still especially robust but susceptible to fading when exposed to seawater or UV light, bringing with it an appearance distinctive to each specific watch. The case is the final pre-Super Case example, retaining the slender, sweeping profile over the far more brawny models of today’s catalog. Additionally, for an extra cherry on top, the reference 14060 is the last to have lug holes, and nothing turns a collector’s head quite like a case with lug holes. This means switching the original hollow link Oyster bracelet for a rubber strap or even a NATO is conspicuously easy, giving one watch several very distinct looks.

Now for the updates. The reference 14060 became the first no-date Submariner to have both a sapphire crystal and a Triplock crown, the components working together to ensure an increased water resistance rating of 300 meters (1,000 feet), which represented a 50% increase over the 200 meters offered by the reference 5513 Submariner.

Inside, the former Caliber 1520 was replaced with the Caliber 3000, bringing the watch into line with the standard Rolex balance frequency of 28,800vph. While the Cal. 3000 was certainly a more modern movement than before, it was missing a couple of features that were included as a matter of course on most other in-house Rolex movements. The most glaring omission was the Breguet overcoil, with Rolex instead opting for a flat hairspring. A customary presence in high-end mechanical timepieces for over 200 years, the overcoil ensures greater accuracy by providing a more consistent tension to the spring. With the reference 14060 positioned as the least expensive Submariner model, the absence of a Breguet overcoil could very well have simply been to keep prices down.

Regardless, the Rolex Caliber 3000 movement was engineered well enough to eventually go on to gain certification from the Official Swiss Chronometer Testing Institute, but not those ticking inside the ref. 14060. Borrowing another aesthetic from its ref. 5513 predecessor, the ref. 14060 was always a “two-liner” and never included the ‘Superlative Chronometer Officially Certified’ tag on its dial that comes from passing COSC testing. 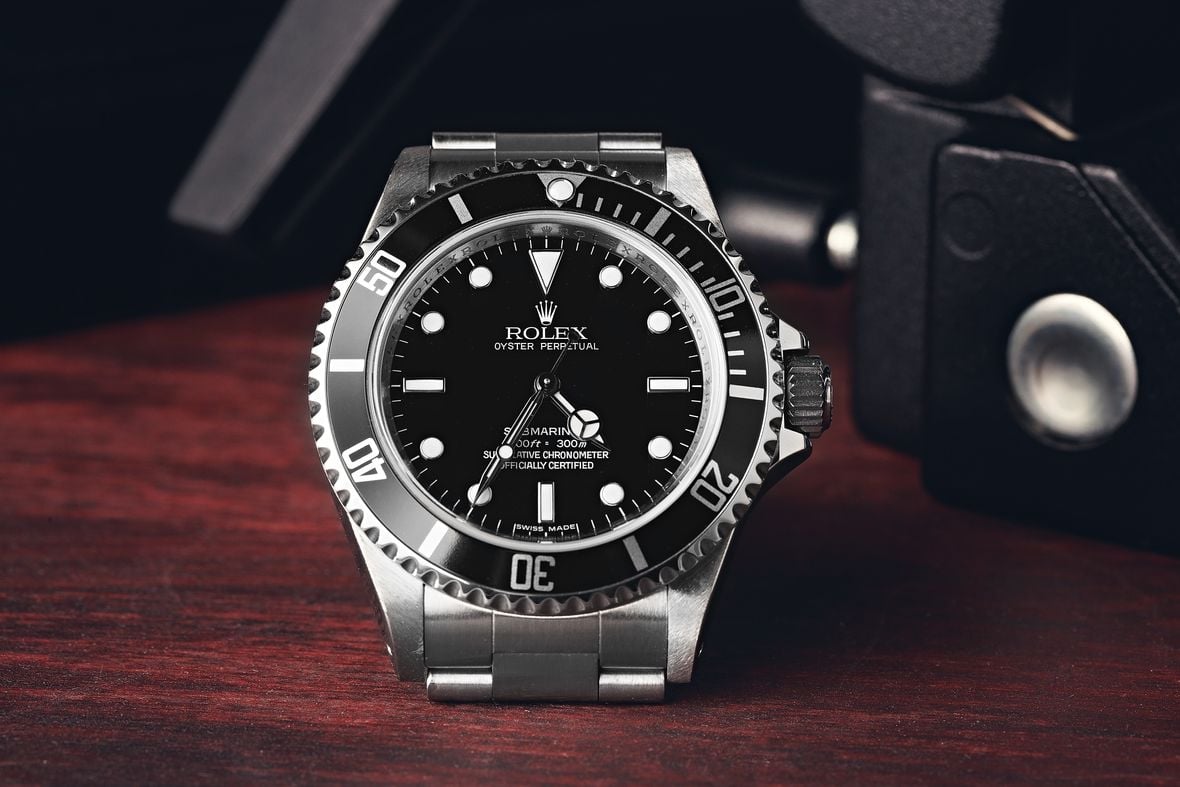 Nearly a decade later, Rolex made enough of a change to the Rolex Submariner ref. 14060 to warrant adding a suffix to its reference number, but not one big enough to merit an entirely new number altogether. The reference 14060M (with the ‘M’ standing for “modified”) was released in 1999 and fitted a revised movement, the Caliber 3130. The no-date version of the base Cal. 3135 which had been powering the Submariner Date series since 1988, the Cal. 3130 brought with it many of the elements missing from the previous iteration.

The Breguet overcoil was reinstated, a larger balance wheel fitted, and the balance cock was replaced with a full balance bridge for added stability. All told, it gave the new Caliber 3130 improved performance metrics, and its physical size – approximately 28mm diameter and 6mm in height – lent it an inherent strength; perfect for the toughest of tool watches.

Even still, the first generation of the Submariner 14060M also consisted of two-line dials, despite the updated movement. Likely due to the additional costs associated with submitting the movements for third-party testing, Rolex still seemed reluctant to submit the watch to the scrutiny of the COSC, and so the first Submariner 14060M watches were not officially qualified as chronometers.

It wasn’t until as recently as 2007 that the brand sought official chronometer-0certification for its Submariner No-Date movements, leaving collectors with the choice when purchasing a Rolex Submariner ref. 14060M of going for a formally sanctioned four-line ‘Superlative Chronometer’ version or sticking with the cleaner dial and more vintage-inspired aesthetic offered by the older two-liner variety. 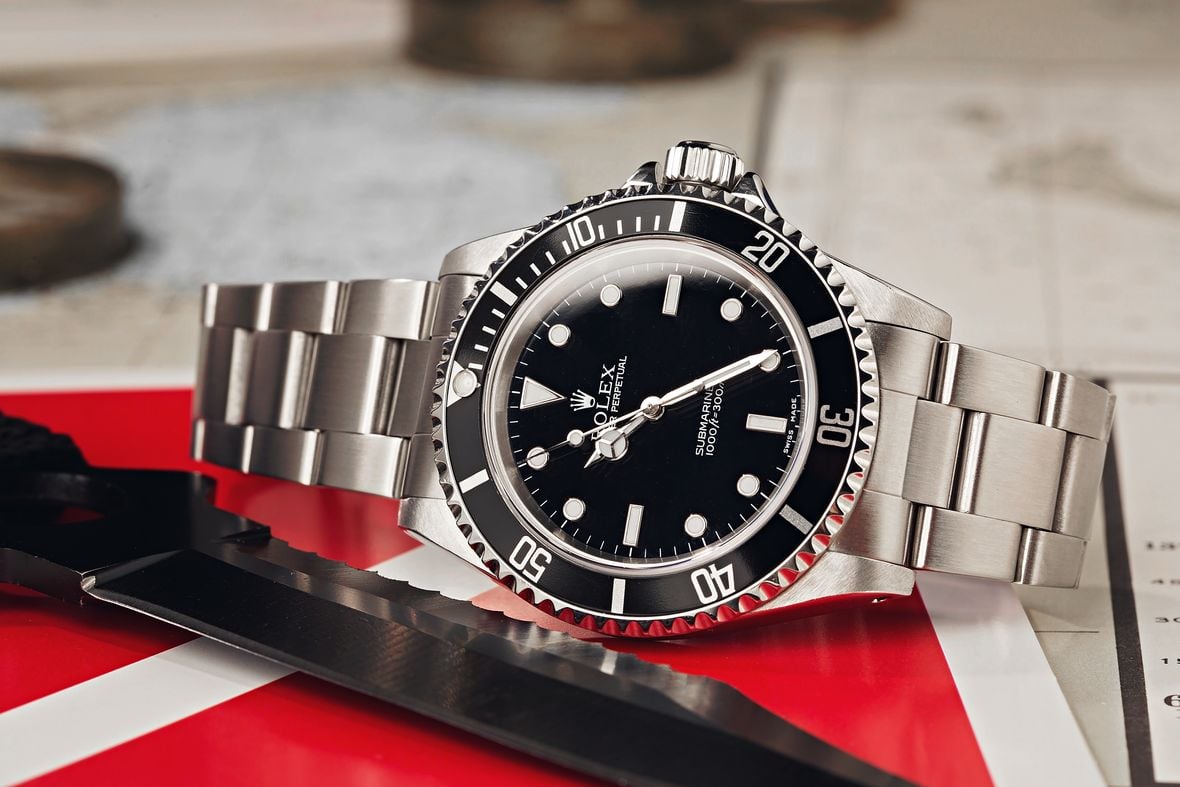 Are the ref. 14060 and the ref. 14060M the absolute best of both worlds when it comes to the Rolex Submariner? There are certainly plenty of points in their favor.

Each preserves the iconic shape of the great vintage references of the past. Each has the classic dial uncluttered by date windows and magnifying lenses, yet both also contain modern movements, with the sort of bombproof reliability upon which Rolex has long built its internationally-renowned reputation. In fact, the movement in the ref. 14060M is the same one that powered the no-date Submariner all the way up until it (along with the date-displaying Caliber 3135) was officially retired from the Submariner collection in 2020.

Coupled with that is the patina-attracting bezel, something that will continue to set each individual watch apart as time goes on, and perhaps best of all, Rolex Submariner 14060 watches are still some of the most attainable examples of Rolex’s legendary dive watch that are available on the pre-owned market today. Entry into the ‘last of the best’ club starts at around $9,500 to $11,500 and due to the model’s long production period, examples are often readily available on the pre-owned market.

With a history going back over six decades, each reference of the Rolex Submariner is a true masterpiece. As such, there is no such thing as choosing the ‘wrong’ model. But for all-around versatility, the iconic reference 14060 represents the link between old and new, and it is in a league of its own. 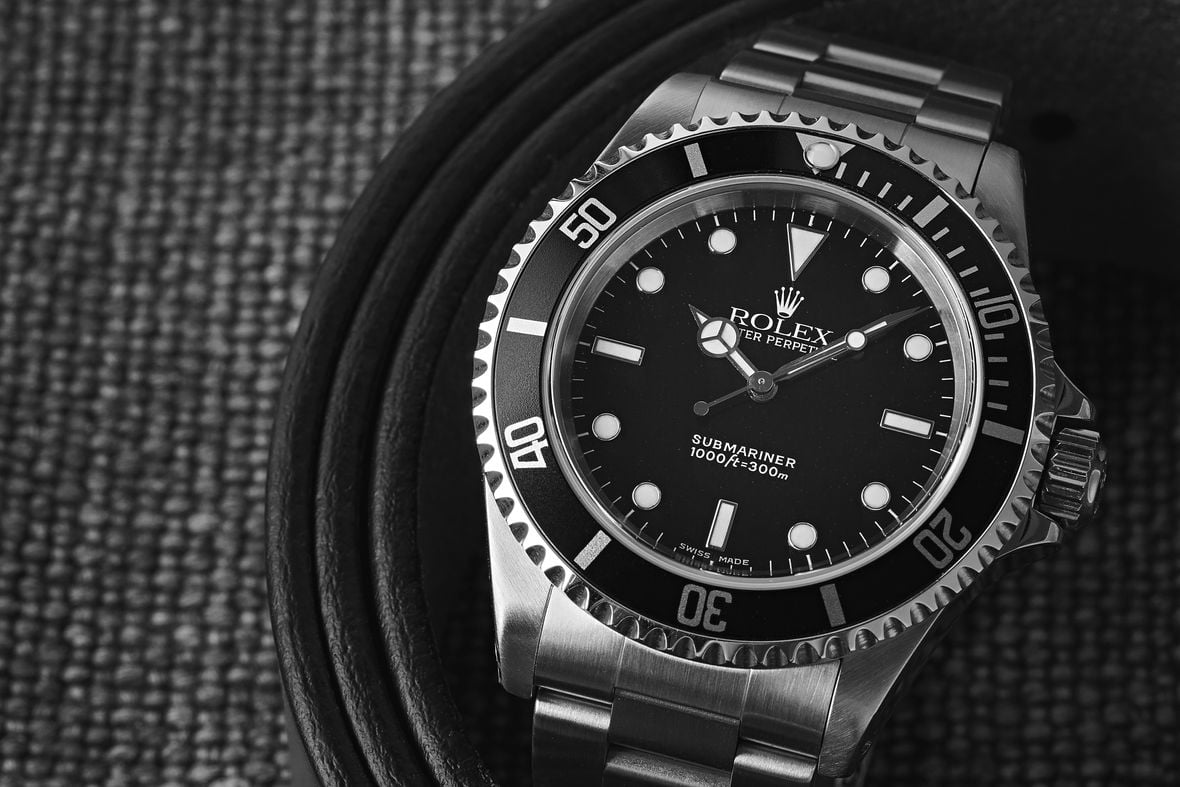 10 Responses to “The Last of the Best? The Rolex Submariner Reference 14060”