As part of our series looking at the sometimes barely noticeable design differences that exist across a single Rolex reference, we turn our attention to one of the most lusted-after pieces in all of the brand’s archives; the Rolex Sea-Dweller ref. 1665 – much better known as the Double Red Sea-Dweller (DRSD). Named for its twin lines of red dial text; ‘Sea-Dweller’ and ‘Submariner 2000’, this was the debut offering in the highly successful and influential series, the one originally built for and in conjunction with COMEX, the French saturation diving pioneers. 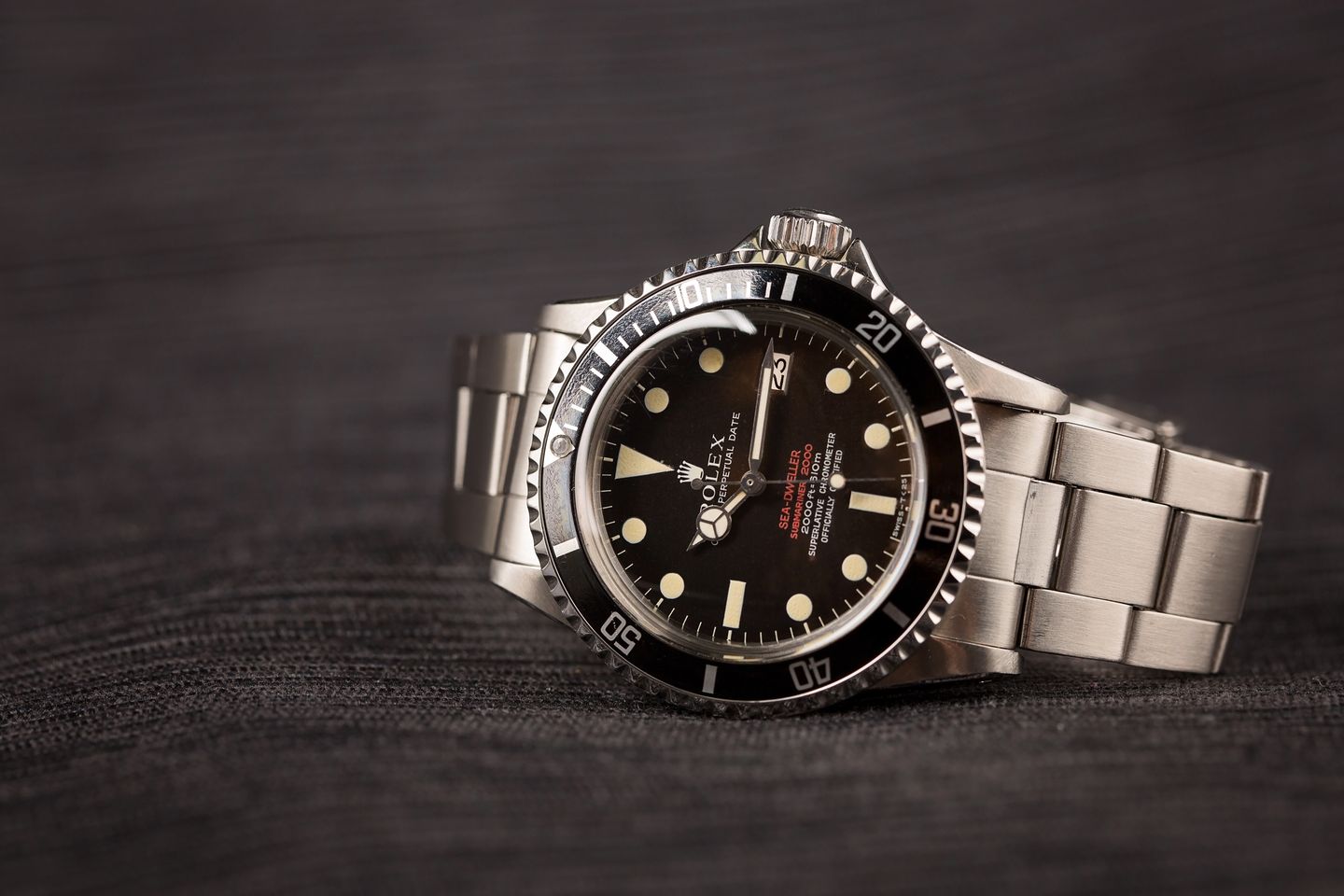 In production for 10 years, between 1967 and 1977, the DRSD took over where the Submariner left off, leaving its little brother in the relative shallows with its incredible depth rating of 2,000ft versus the Sub’s, at the time, 660ft. And it introduced the Helium Escape Valve (HEV), a revolutionary pressure release vent that allowed built up gases accumulated inside the case during extended stays underwater to seep out before they could damage the watch.

During its decade-long run, the DRSD went through four different dial versions and three different casebacks. Below, we will take a look at some of the variances between each one and the effect they have on the resale price of this all-time classic. 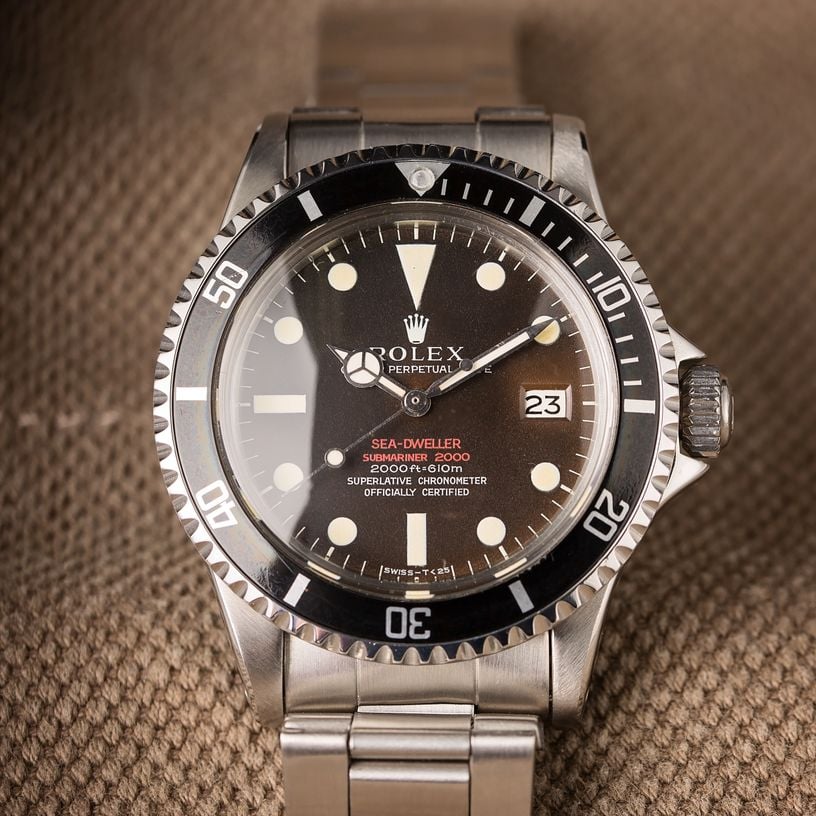 Just as a quick aside; before there was the Double Red Sea-Dweller, there was the Single Red Sea-Dweller (SRSD). These were the prototypes Rolex made to test whether their new creation could survive the environments experienced by COMEX’s crews. As such, they were never sold commercially and were instead given out to a handful of professional divers to wear on the job. Some were fitted with the HEV, others weren’t. 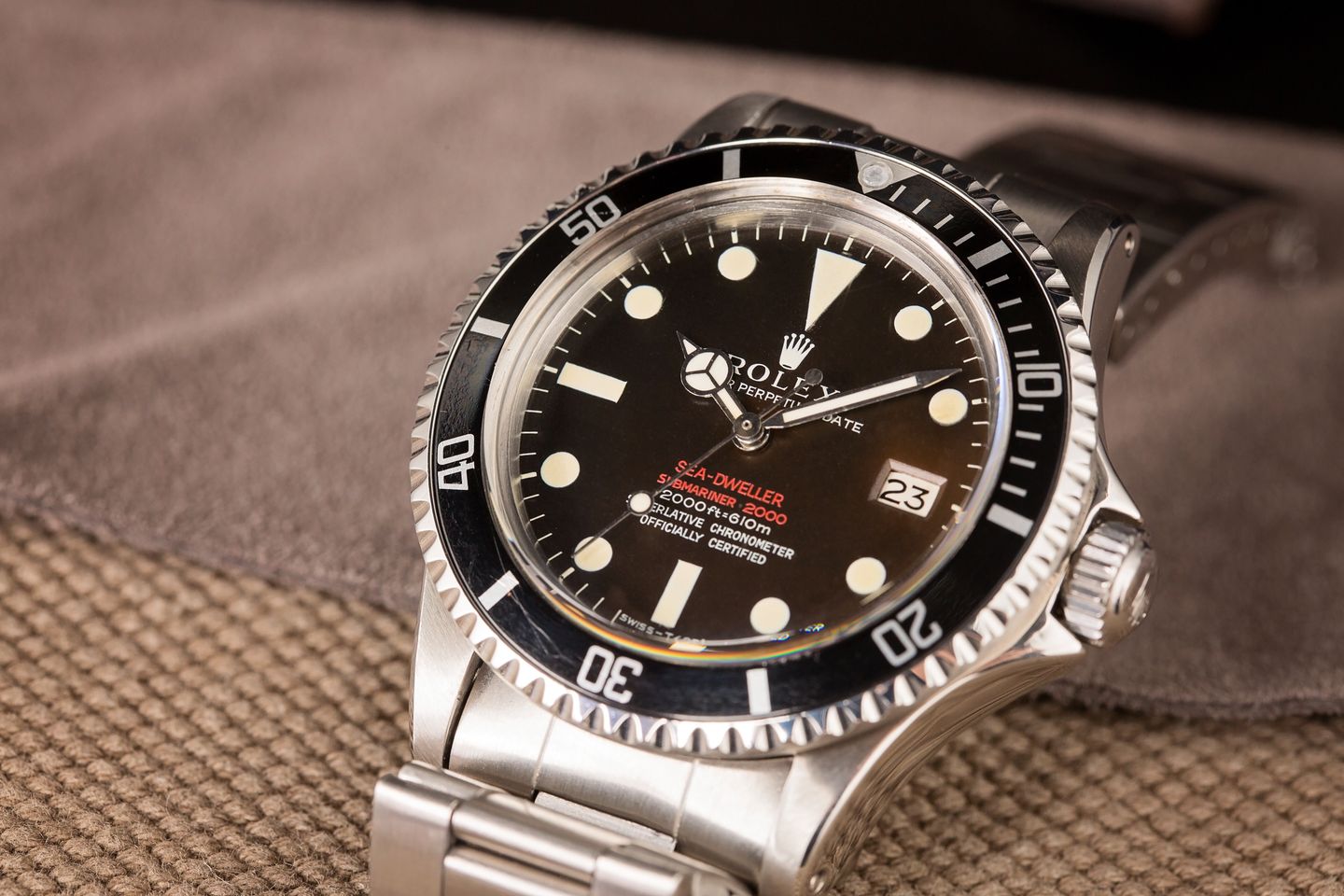 As you can probably guess only one line of text on the dial – the ‘Sea-Dweller’ title – is picked out in red with the rest in white, including the unusual depth rating of 500m, or 1,650ft. The feedback Rolex received from COMEX was poured into the production version; the Double Red.

While an example of the Double Red Sea-Dweller can be tracked down without too much difficulty on the pre-owned market, the chances of you stumbling across one of the 12 Single Reds rumored to still exist (only 11 of which with their original dials) are extremely slim. 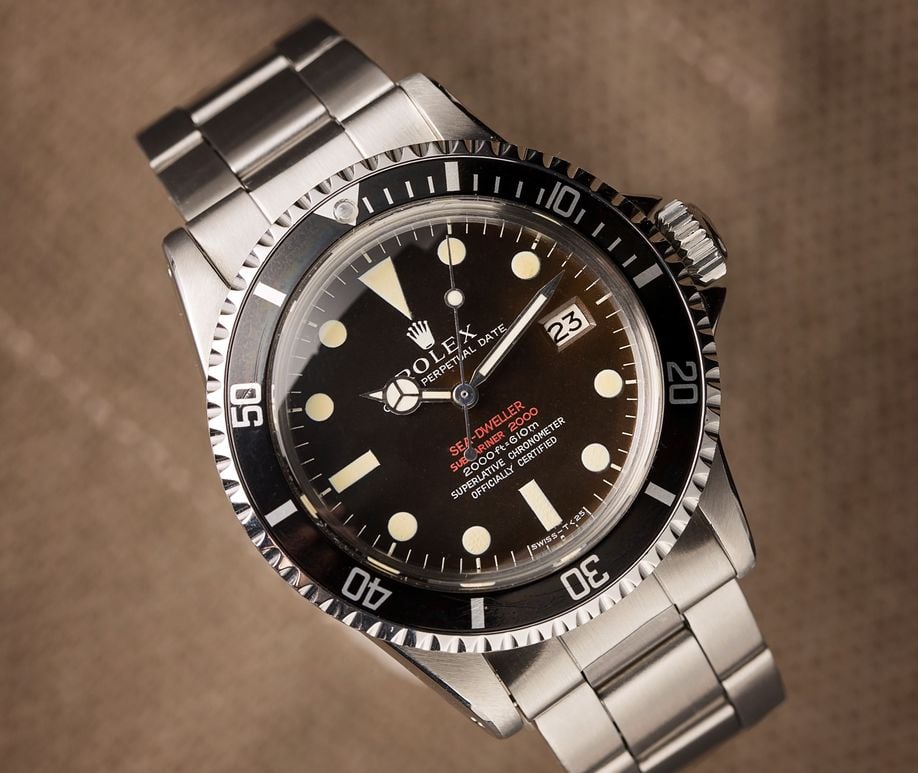 The Mark I Dials and the Patent Pending Case Back

As well as the Single Red, Rolex’s first trial with the Helium Escape Valve came when they retrofitted it to a number of ref. 5513 Submariners at the request of COMEX, giving these watches the 5514 reference number. Today, these watches (along with all other Submariner watches that have the COMEX logo on their dials) are known as COMEX Subs. 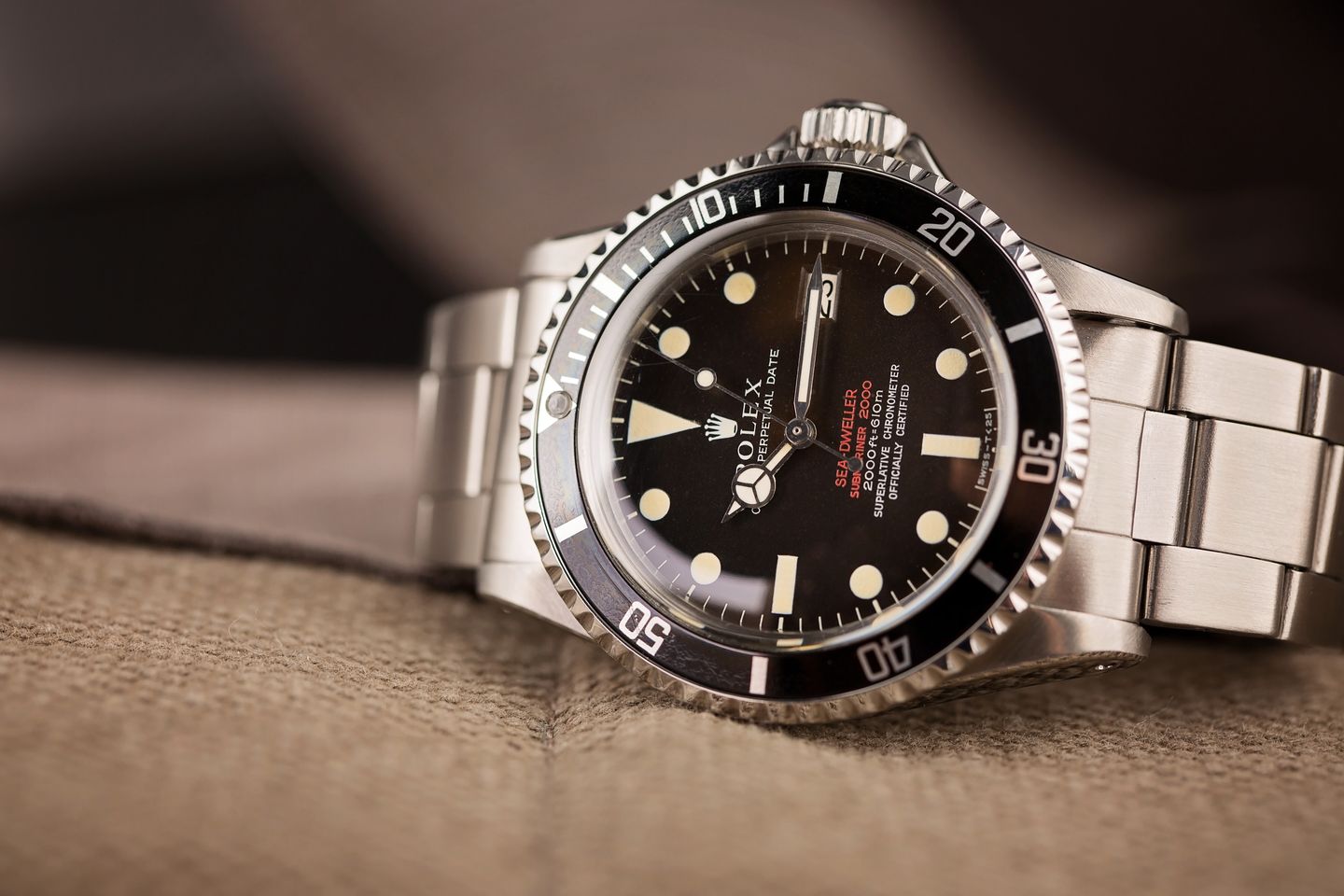 The HEV proved a huge success; an ingeniously simple solution to a challenging problem, and Rolex decided to rush through the production of the first Sea-Dweller, the ref. 1665, even before they had received the official copyright for their new invention.  Consequently, the very first batch of Sea-Dwellers had a caseback engraved (already making it a rarity among Rolex watches) with the text ‘Oyster Gas Escape Valve’ and next to it, ‘Patent Pending’. Additionally, the Rolex coronet and the brand name are featured prominently.

As with many new releases from the group, these initial watches from 1967 were issued in a very limited number, as Rolex literally tested the waters. The actual figure can only be guessed due to the highly secretive nature of just about everything Rolex does; however it is estimated there were only around 100 examples ever made. 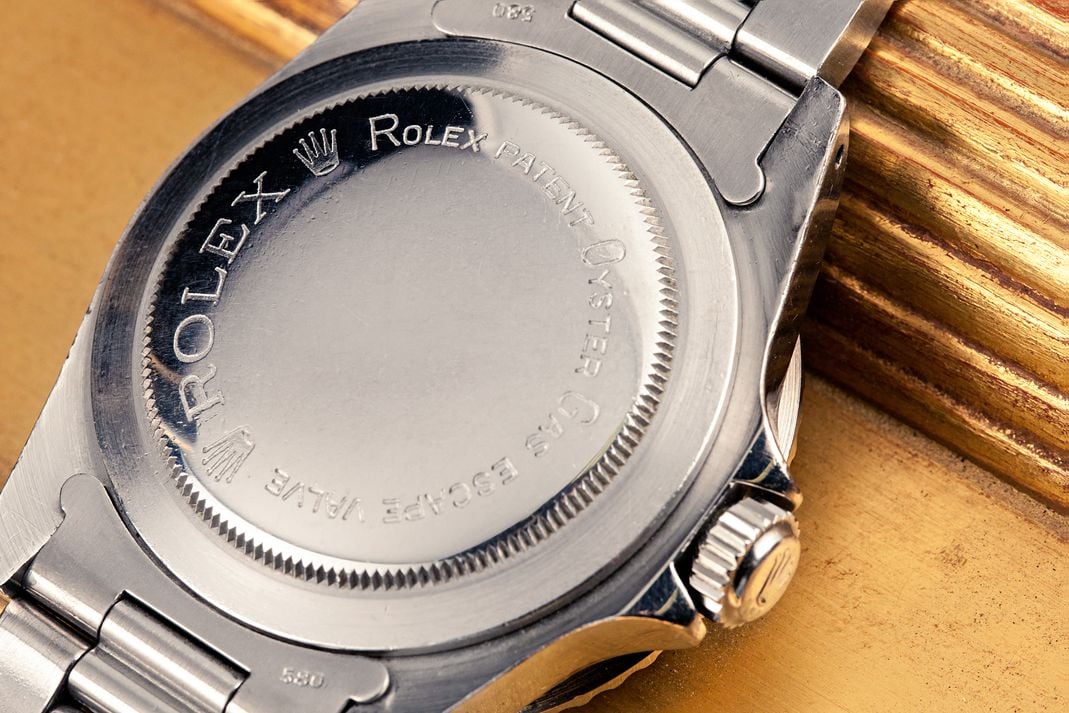 The 40mm stainless steel case was almost identical to the COMEX ref. 5514 Submariner, and noticeably thinner than the case that was used when the watch was put into regular production in 1971. All were fitted with an HEV and were marked with a serial number between 1.7 million and 2.2 million.

The dial, known as the Mark I (or MKI) among collectors, is matte black with white hour markers. The coronet logo is flat at the bottom, a little heavier looking than normal, and lines up perfectly with the ‘L’ of Rolex underneath it. Those two all important red lines, ‘Sea-Dweller’ and ‘Submariner 2000’ – one above the other, use the same size font, unlike later versions where the lower script is slightly smaller. The red print was actually painted over white so today, many of these pieces have faded to a very faint pink. 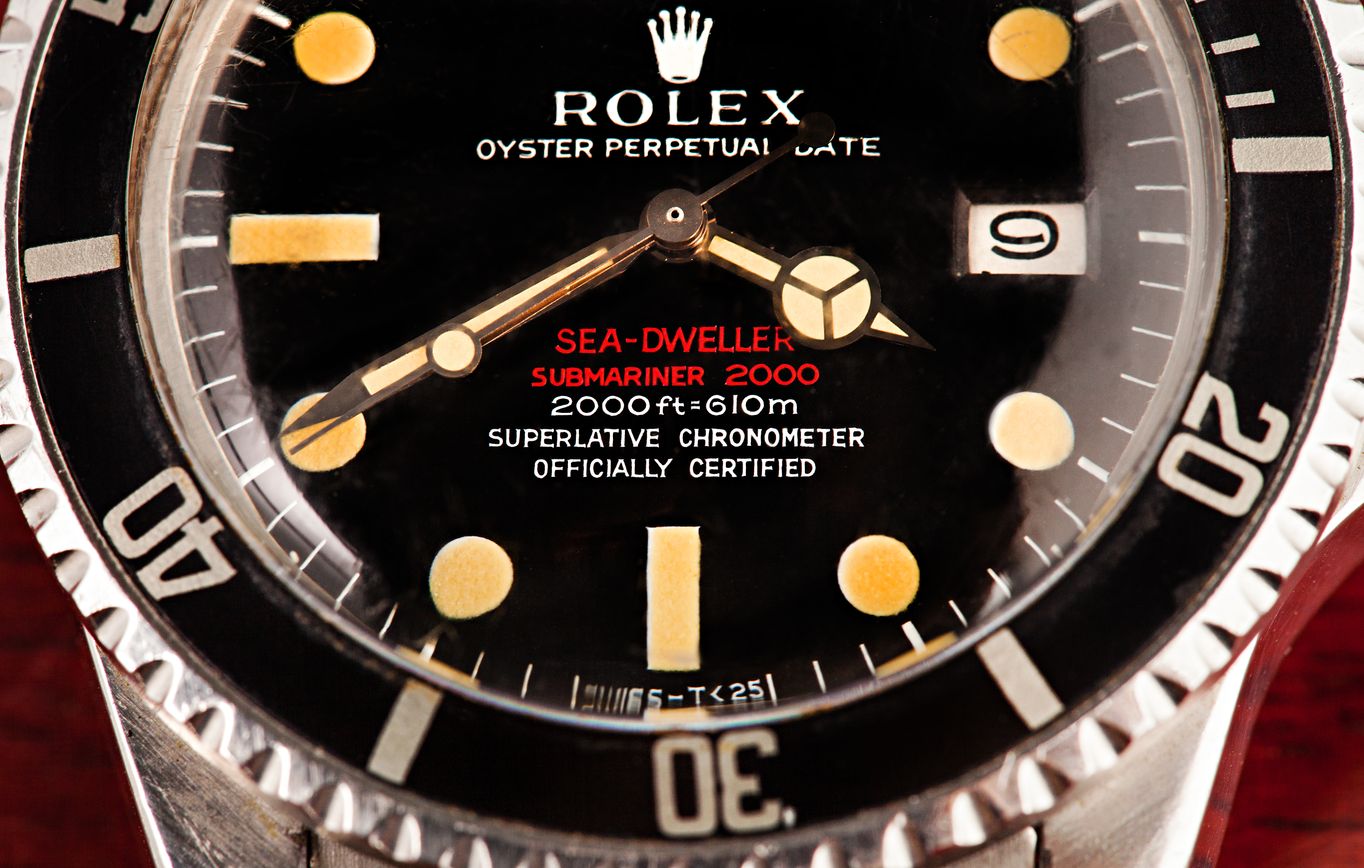 A big selling point for the Sea-Dweller concerned its date function. It was introduced onto the Submariner with the ref. 1680 the same year as the DRSD’s launch and immediately split opinion. Some fans felt there was no need for a date window on a recreational dive watch in the first place, and fitting the controversial Cyclops window over it alienated others still further.

With the Sea-Dweller destined to be worn by commercial divers who could realistically expect to spend days if not weeks living in underwater environments, knowing the date was an obvious advantage. Since the depths they were working at would be so highly pressurized a domed crystal without a Cyclops magnification lens was fitted to the Sea-Dweller, allowing its dial to remain more pleasingly symmetrical than the Sub’s, and with a touch of added utility. 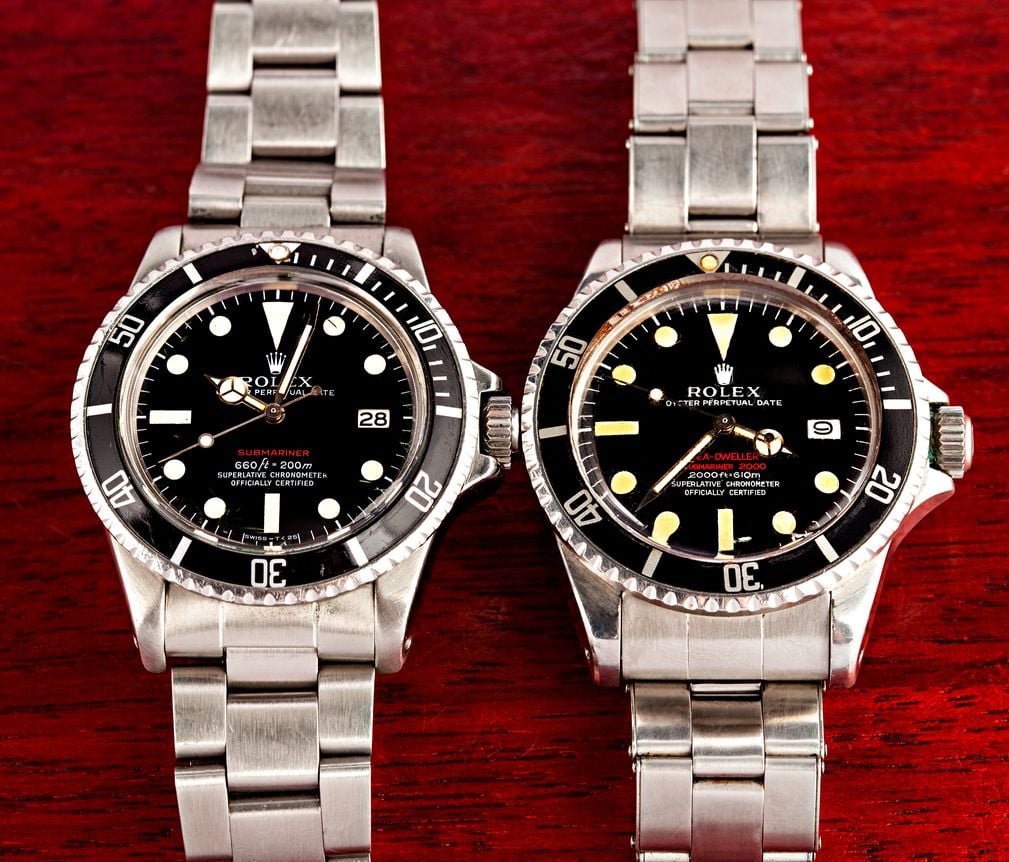 Just a year later in 1968, the Mark II versions of the Double Red started to emerge. The most important difference occurs on the reverse, with the caseback now engraved with ‘Rolex Patent Oyster Gas Escape Valve’ – their new invention having received its official license. 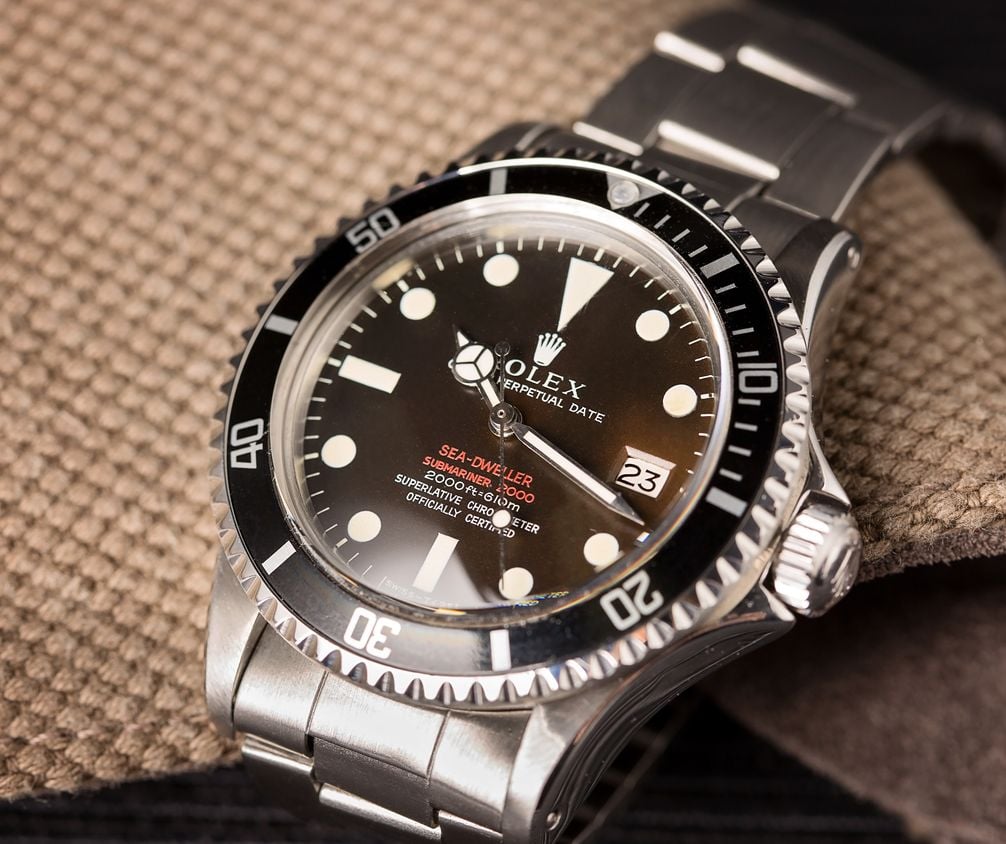 The dial also has a number of differences, some intentional, others accidental. ‘Submariner 2000’ is now slightly smaller than the ‘Sea-Dweller’ text, and the ‘D’ and ‘W’ are touching, a quick giveaway for those who know where to look as to which iteration it is. Both lines are obviously still red in color. At the 12 o’clock, the coronet is slightly blurred and badly defined, leading to the nickname the smudge crown. And the dial itself was covered in a lacquer which reacted with UV light, oxidizing and turning from matte black to a deep chocolate brown color over time. With the exception of the Patent Pending Mark I models, the chocolate dial Mark II DRSDs are the most valuable and sought-after examples of this highly collectible watch. 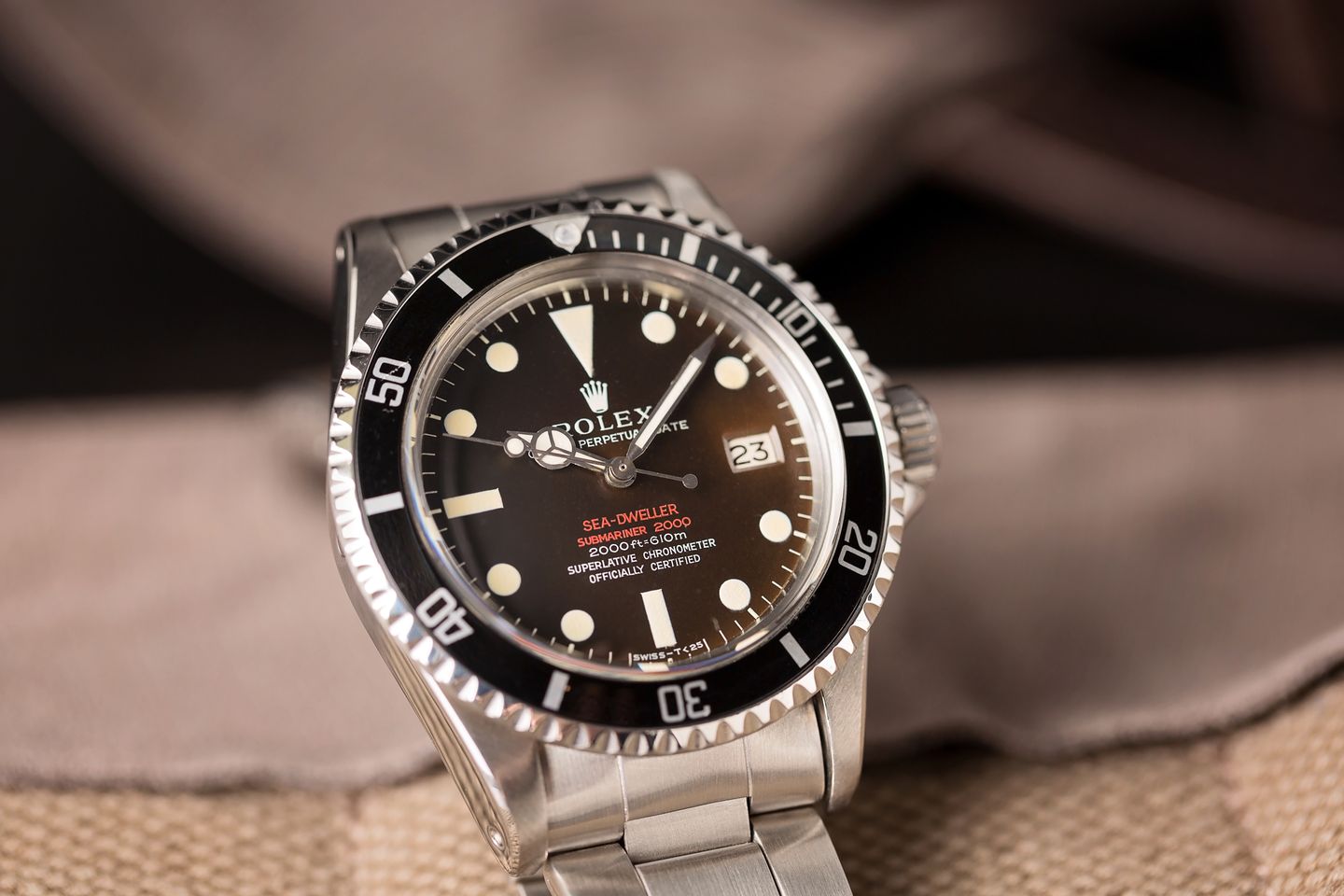 So how valuable are we talking? The earliest versions don’t come up all that often, and it is always something of an event when they do. As with all true classic Rolex watches in recent years, auction prices are skyrocketing. A Mark I Patent Pending example went for just under $144,000 at Philips’s Winning Icons sale a few months ago. More recently, a chocolate dial MKII sold for around $52,500 with Sothebys.

As a point of reference, if you were even able to find a Single Red up for grabs somewhere, it would be going for seven-figures. The good news is that after 1971, Rolex put the Sea-Dweller into regular production with the Mark III and Mark IV dials, and there are a lot more of those available on the pre-owned market, with noticeably more palatable prices.

Be sure to check back here for Part 2 of our article on the minute differences in the ref. 1665 Double Red Sea-Dweller! 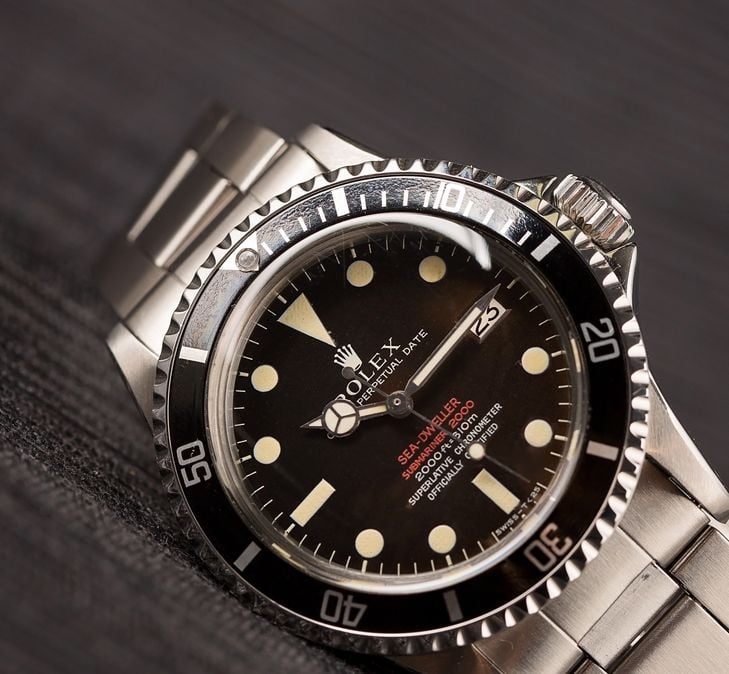