Breitling has been developing and producing luxury watches since 1884. Its history in aviation is storied, having created one of the first pilot’s wristwatches with a chronograph movement. However, Breitling watches also have a strong reputation throughout the dive watch industry, with its most notable model, the Superocean, beginning production in 1957, and the Superocean Heritage entering the market 50 years later in 2007.

The Superocean’s production run, which spans over half a century, has yielded numerous variations of the line that continue to evolve to include the latest in watch fashion and watchmaking technologies. The Superocean Heritage continues to evolve as well, but also maintains a design aesthetic that closely mirrors that of the very first model ever produced. When choosing between the two, what it really comes down to is personal taste. Do you prefer the look and feel of retro Breitling watches, or does a modern timepiece speak to you more?

Breitling Watches and the Superocean History

The Breitling Superocean hit the market in 1957 with the three-hand reference 1004 and the chronograph reference 807. Breitling’s foray into the world of dive watches came just after Rolex had released the iconic Submariner. Accompanied by the Breitling name as well as impressive 200 meters of water-resistance, the Superocean was a success. Its design took a minimalist approach with simple markers on the dial and bezel, along with bold, easy-to-read hands. This design ethos would be revived with the Superocean Heritage model, which would come to the market 50 years later.

During its production run, the Superocean saw many notable upgrades, such as updates to its luminous material, the addition of a Helium Escape Valve, and a depth rating that promises water resistance up to 2,000 meters on certain models.  Today, the collection also includes the Superocean II and is available in 36mm, 42mm, 44mm, and 46mm case sizes. Like many other Breitling watches, this impressive diver can also be had in a plethora of dial and bezel color options, making it a varied and interesting watch to collect.

The Superocean 2005 was introduced in the 1960s and touted an innovative “Slow Motion” feature. This function earns its name due to the chronograph hand circling the dial once per hour, instead of once per minute. Given that the watch was specifically designed for diving, this unusual feature makes its chronograph function far more useful for measuring submersion times. This function was accompanied by an interesting disc indicator just above the 6-hour marker to allow users to distinguish when the chronograph was engaged.

The Superocean 2005 Execution 2 was released a few years later in 1971 and debuted a seconds register at the 9-hour marker as well as baton hour markers and broader hands. The “Yachting” bezel option was also introduced with this model and was offered alongside a classic diving bezel with a traditional 60-minute scale.  Both 2005 editions were intriguing Superocean variants that showcased Breitling’s watchmaking prowess. 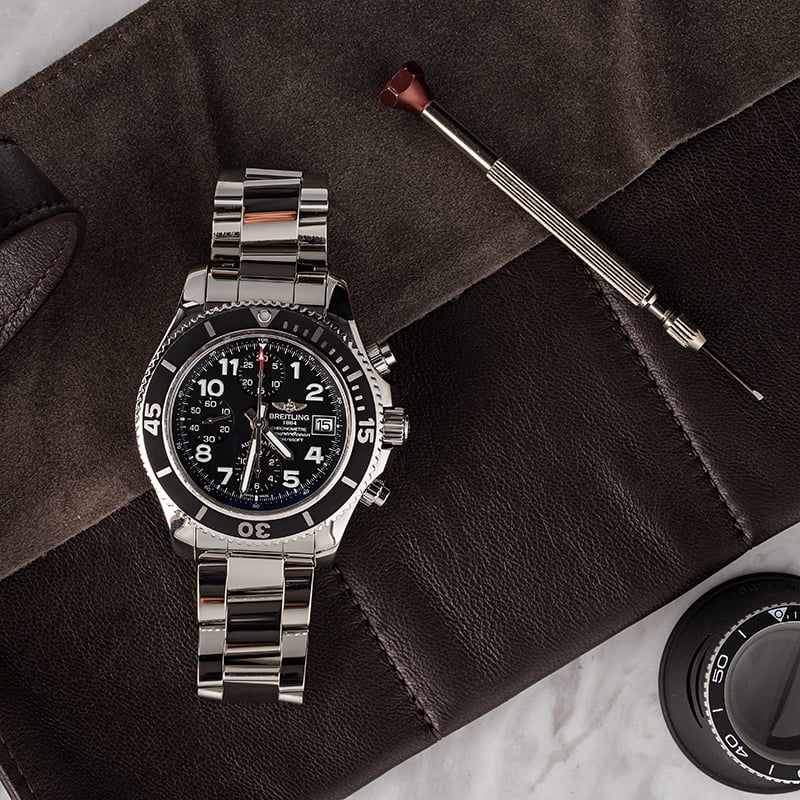 The Superocean collection saw many more noteworthy upgrades between 1971 and the introduction of the Superocean Heritage in 2007. However, this model is one of the most fascinating recent additions with its flawless 1950s-inspired design, date aperture on the dial, and classic mesh bracelet. Side-by-side, the original Superocean, and the Superocean Heritage boast many similarities, including the bezel, which omits the numeral markers often seen on bezels offered from other brands, similar arrow hands, and a contrasting luminous display for a legible reading on land or in the ocean.

The Heritage II collection entered the market around the Superocean’s 60th anniversary in 2017. The second generation of the Superocean Heritage is currently available with either a 42mm, 44mm, or 46mm case size and offers users 200 meters of water resistance, similar to the original 1950s model. The Breitling Superocean Heritage II is also equipped with either a traditional three-hand movement or one with chronograph functionality. Cutting-edge technology, coupled with a nostalgic dive watch aesthetic, make both editions of the Breitling Superocean Heritage collection a joy to wear. It’s also available in a variety of movements, bezel and dial colors, bracelet types, and case sizes, making it easy to find the perfect Superocean Heritage to suit your wrist. Conversely, the original Superocean embraces a much more contemporary style, while still offering all the same high-performance and water resistance that has defined the collection since the 1950s. 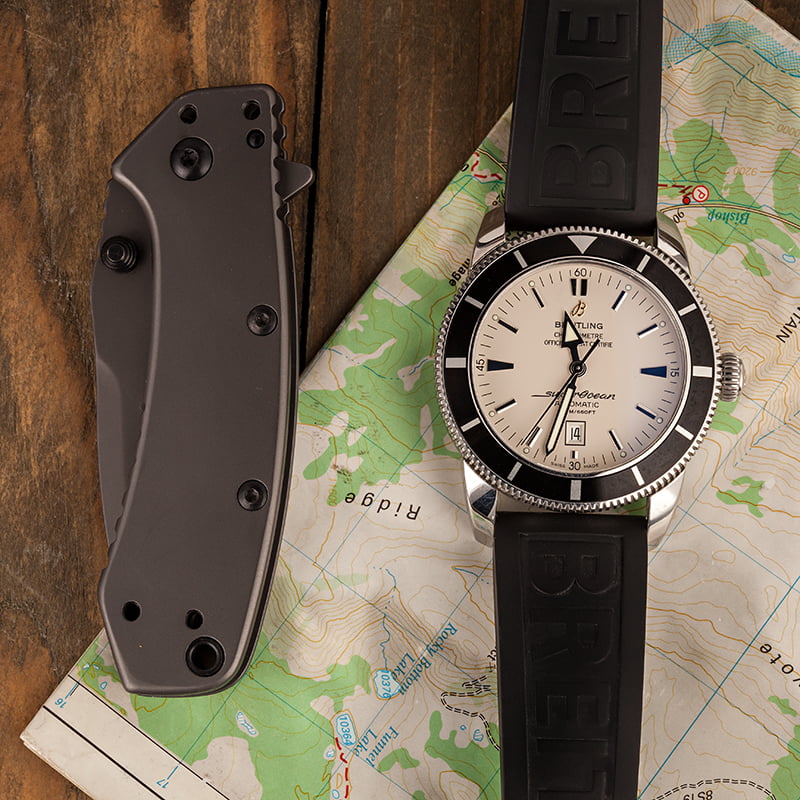