The Omega Speedmaster is easily among the brand’s most famous watches, and the classic Speedmaster Professional is the quintessential example that has been flight-qualified by NASA and holds the distinction of being the first watch worn on the moon. With that in mind, Omega has expanded the Speedmaster collection over the years to include a surprisingly wide range of different chronograph watches, and for about two decades from the late 1980s until about 2009, Omega produced a smaller version of the classic Speedmaster with an automatic movement, which was known as the Omega Speedmaster Reduced. 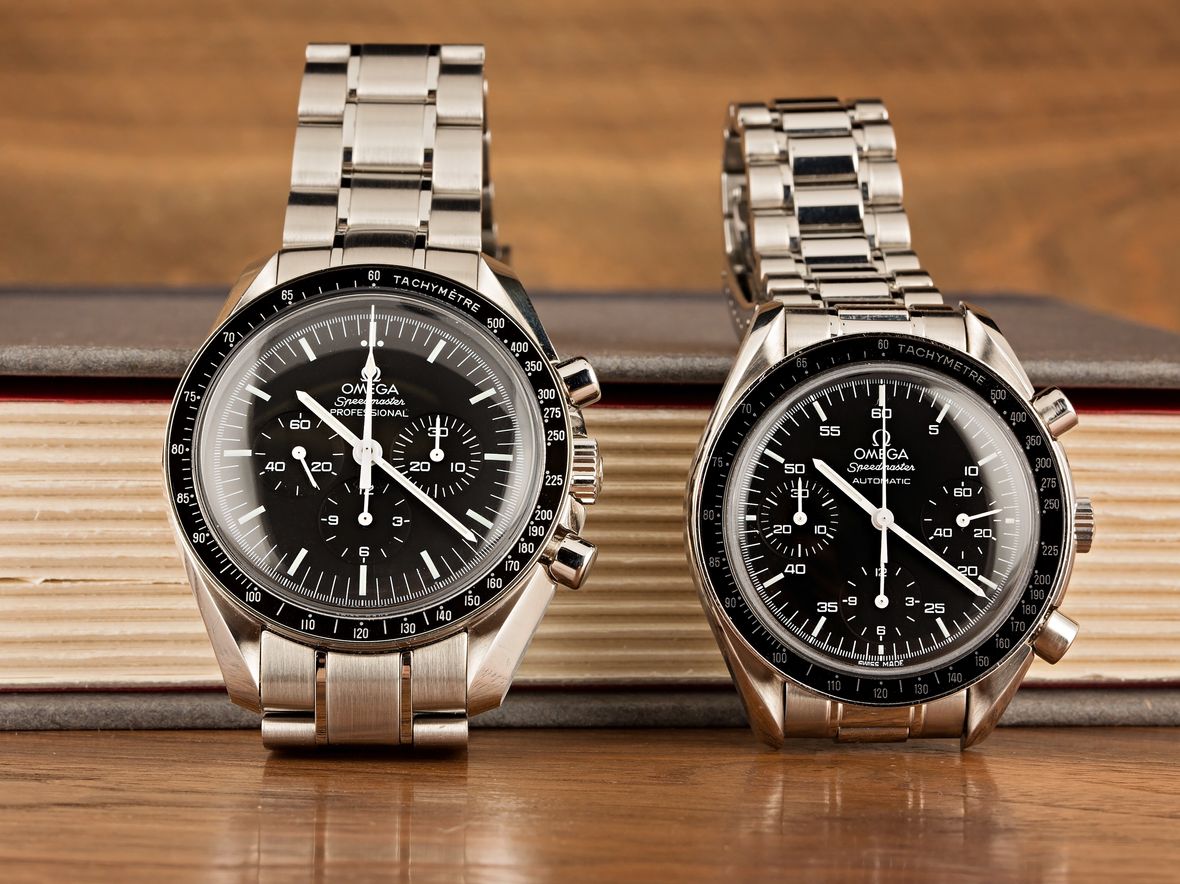 – Launched as part of a trio of sport/tool watches alongside the first Seamaster 300 and Railmaster models.

– Originally designed for the world of automotive racing.

– The world’s first watch to feature an external tachymeter bezel.

– Flight qualified by NASA for all manned space missions (1965).

About The Omega Speedmaster Reduced

The Omega Speedmaster’s illustrious history began more than 60 years ago in 1957, which turned out to be a seminal year for the brand and marked the release of not only the model that would give birth to the first watch to visit the moon but also the Seamaster 300 and Railmaster lines. While the Omega Speedmaster Professional’s legacy is long and well-documented, having spent a huge amount of time in the press ever since the 50th anniversary of the moon landing, there is a brief and often-forgotten chapter to this story that we want to focus on today: The emergence and disappearance of the Omega Speedmaster Reduced.

If you haven’t heard of the “Reduced” before, don’t worry. It hasn’t been available for the better part of a decade, as Omega discontinued it around 2009. With that in mind, while it was available, the Reduced was often seen as the “lite” version of the Speedmaster Professional, not just because of its smaller size (it measured 39mm wide instead of 42mm), but also because of the ways in which it departed from the design of the original, with the intention of making the Speedmaster line more affordable and suitable for a modern market that demanded automatic-winding timepieces. 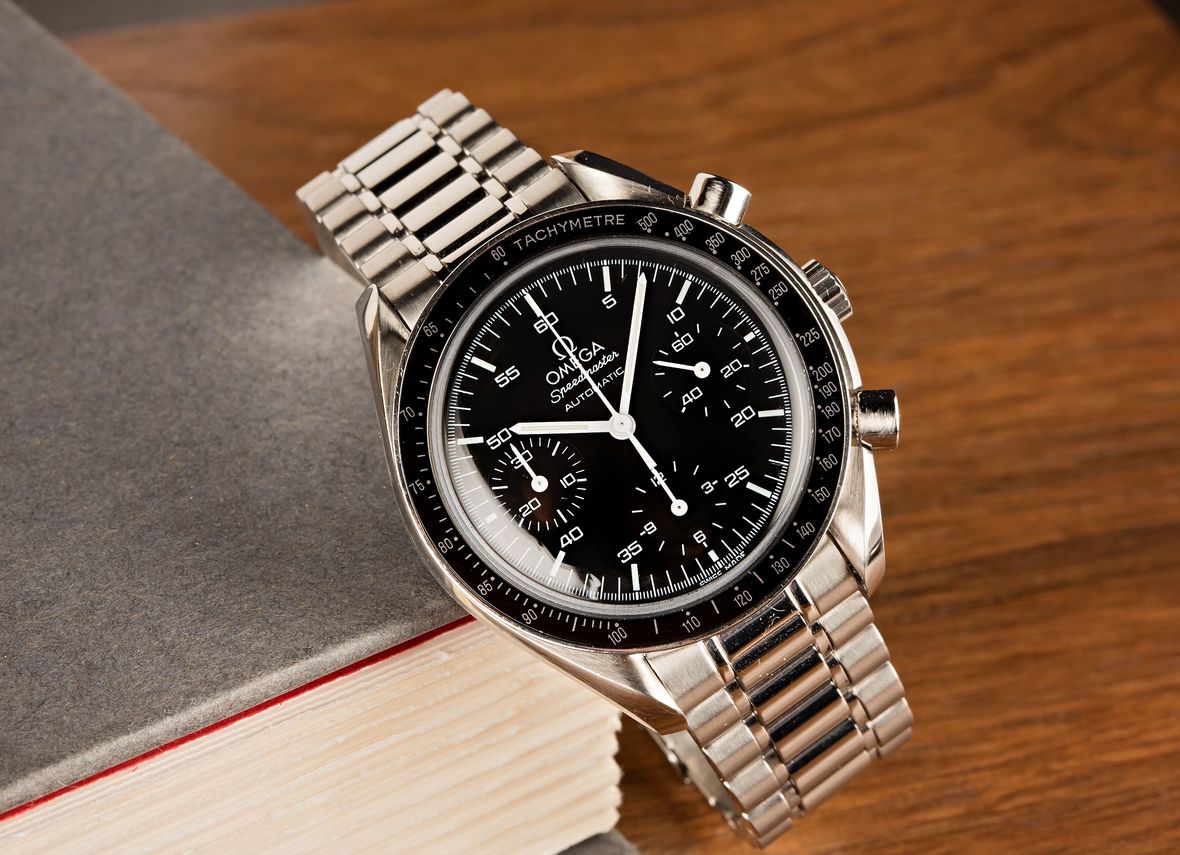 Under the hood, the Speedmaster Reduced used an automatic ETA base caliber (2890-A2) that was upgraded to include chronograph functionality by way of a dial-side module made by Dubois-Dépraz (thus becoming the Omega Caliber 3220). This differed significantly from the Omega Speedmaster Professional, which is famously a hand-wound caliber with an integrated chronograph mechanism. While some purists may not regard the Speedy Reduced as worthy of true Speedmaster status because of this, the change in the movement did had a few interesting effects aesthetically, which should also be taken into consideration when deciding which version of the Omega Speedmaster belongs on your wrist.

First and foremost, whenever a bolt-on module like the Dubois-Dépraz 2020 is used (which was featured in the original Reduced models released in 1988), it influences the arrangement of the pushers and the winding crown. If you look at the Speedmaster Reduced model side-on, you will notice that the pushers sit slightly higher than the winding crown, rather than in a straight line as you would expect to see on an integrated chronograph. This is because the pushers and the crown are engaged with what are effectively two separate mechanisms geared to run on the same power source, and it is often one of the tell-tale signs of a modular chronograph movement. 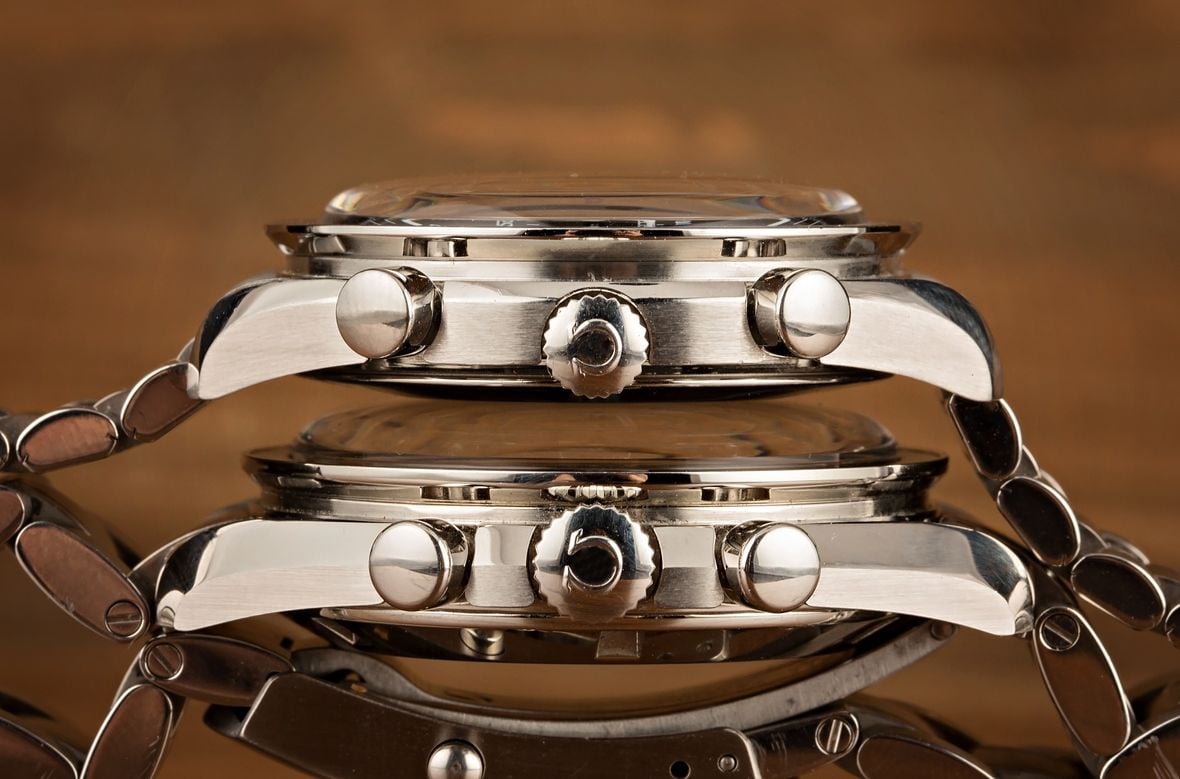 Beyond the different pusher and crown arrangements, the sub-dial layout is also different on these two Speedmaster models. At first glance, the Speedy Reduced is clearly an Omega Speedmaster, but exactly how much it varies from the standard Professional model doesn’t really become apparent until the two watches are placed side-by-side. At this point, the differences are unmistakable and there are also quite a few of them.

The sub-dials of the Speedy Reduced are placed far closer to the periphery of the dial than the tri-compax cluster of the Speedmaster Professional, and this is even more noticeable due to its smaller case size. This aesthetic update gives the impression that the movement of the Speedmaster Reduced is trying to bust its way free of the case, and many collectors prefer the calm serenity of the Professional, where all of the registers simply fall into their natural place, without overlapping with any of the hour markers.

Another stark difference between the two dials of these similar Omega watches is the presence of five-minute numerals on the original Speedy Reduced model, which are completely absent on the Professional. Combined with the smaller dial, these additional numerals make the display of the Speedmaster Reduced seem a bit more cluttered, yet not in an unpleasing way. Whether or not this resonates with you comes down to personal preference. If you are looking to add an Omega Speedmaster to your collection and you prefer smaller diameters, automatic movements, and “active” dials rather than clean and simple displays, then the Speedy Reduced might be the perfect option. 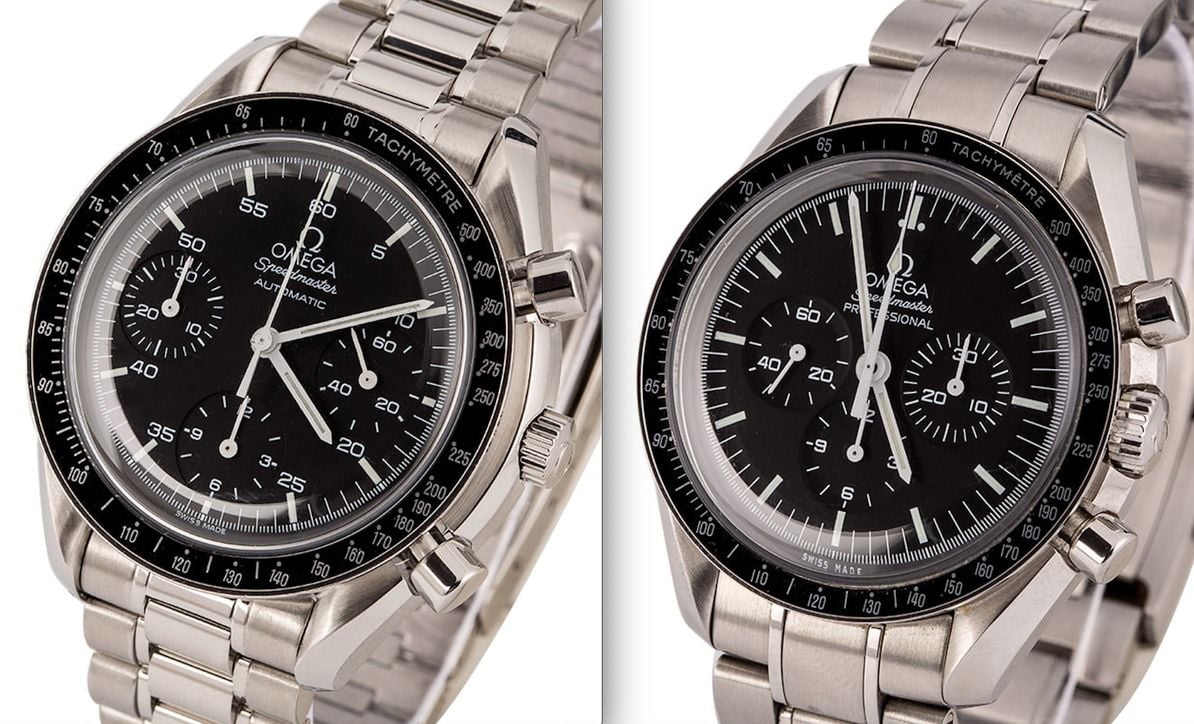 Perhaps the single most attractive aspect of this extinct model for collectors is far more affordable on the pre-owned market than its big brother. This is, in part, due to the movement used inside the watch, but more likely to do with its lack of provenance. It is highly improbable that Omega will ever find itself in possession of the kind of PR gold that the moon landings dropped into its lap and as such, the Omega Speedmaster Professional will forever occupy special status within the brand.

However, the Speedmaster Reduced is a really fascinating anomaly. It existed in the collection for a little over two decades (from about 1988 until 2009), it has a self-winding movement, there are a few neat special editions (such as the Schumacher editions, panda dials, and even a blue dial released in Japan), and it fits the current trend of smaller-sized watches. With some of these models still available on the pre-owned market and priced significantly lower than a standard Omega Speedmaster Professional, a Speedy Reduced makes for an interesting addition to any collection.

Additionally, if you’re gunning to snare a piece of history, aim for the earlier models that debuted in the late 1980s and early to mid-1990s. These pieces still used radioactive tritium lume, which has the potential to age inimitably gracefully and develop a rich and wonderful patina if it has been kept in the right conditions.

Due to the amount of attention that Omega has directed towards the Speedmaster Professional over the last decade (including an entirely new generation with Co-Axial escapements and Master Chronometer certification), and given that the past decade coincided with an explosion of internet coverage of the watch industry, the Omega Speedmaster Reduced is a model that does occasionally get overlooked and missed. And it is these types of watches – the ones that are just outside of the general consciousness – that collectors should look towards for the chance to snare a relative bargain. After all, at the current pre-owned prices, you can’t go far wrong, and since Omega no longer produces the Speedmaster reduced, prices are only likely to increase in the coming years. 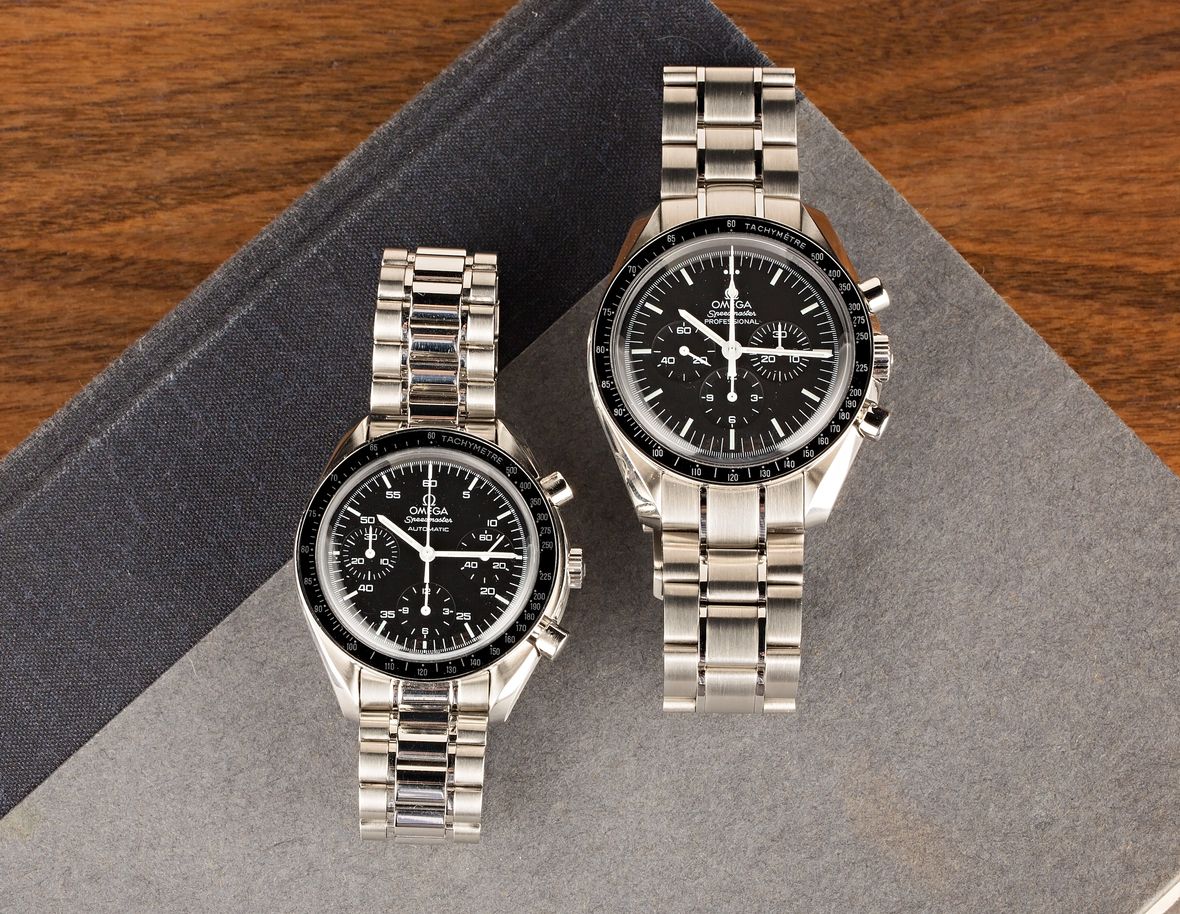